Finally, Dune has come into Earth’s orbit. Denis Villeneuve’s science-fiction spectacular is a planet-sized wonder with galaxy-deep vision and imagination.

In wrestling the author Frank Herbert’s totemic book to the screen, the French-Canadian director (Arrival, Blade Runner 2049) has boldly gone where David Lynch infamously went before, in his wonky 1984 adaptation.

No such issues here. Villeneuve’s 2021 take on Herbert’s far-future space opera is magnificent. The blessed Timothée Chalamet is Paul Atreides, princely heir of House Atreides, the planetary guild installed as the new guardians and miners of the mineral-rich desert planet of Arrakis.

Its sandy expanses both explain its alternative title – Dune – and contain the galaxy’s most precious resource: spice, allowing for faster-than-light travel and gives humans the power to live longer and see into the future.

Arriving on Arrakis with his father Leto Atreides (Oscar Isaac) and mother Lady Jessica (Rebecca Ferguson), young Paul is plagued by dreams in which sees Fremen, the native inhabitants of the planet. One of them in particular stands out in his visions. No wonder: she’s played by the sacred Zendaya.

As House Atreides comes to grips with its new obligations on a hostile planet (notably the ginormous subterranean sandworms that like to gobble up anything and everything that isn’t sand), House Harkonnen refuels its fighting fleet. Meanwhile, Paul must work out what his visions mean – for his own destiny, for his family’s, for that of Arrakis, and for the mysterious desert woman making his dreams all glowy.

With an all-time great score by epic soundtrack specialist Hans Zimmer, plus top-notch production and sound design, Dune has the gravity, in both senses, that this story demands.

So, hats off to M Villeneuve. Dune is the sci-fi blockbuster we’ve been waiting for – and, as the closing credits reveal, is due to have a Part Two. Wahey.

Denis, why did you want to take on an adaptation of this dauntingly dense, previously unfilmable and much-beloved book?
Because I am someone who fell in love with this book – I’ve been obsessed [since I was] 14. It’s stayed with me through the years, and every time I go back to it, I have the same beautiful, nostalgic, melancholic, deep joy of rediscovering it. Hans Zimmer and I were talking about this the other day: we didn’t make this movie as adults. We went back and became teenagers again. There is so much energy and joy in that zone.

How has the source novel aged since it was published in 1965?
It’s a book that, as the years went back, became more and more relevant in what it says about the world. Frank Herbert wrote a portrait of the 20th century. But frankly, I think it would be more accurate to say that he foresaw what would happen in the 21st.

But the book’s relevance is not the main reason why I made the film – I was not thinking about that when I started the adaptation. It was more about the pure love I had for the source material. And I didn’t care what other people were saying about whether the book was or wasn’t adaptable. I had kept waiting for years for someone to do it; I was sure that at some point someone would adapt it. Because there is nothing that has been made before that felt like the spirit of the book. And I got tired of waiting.

What were the key challenges you, as a co-writer of the script, first had to overcome?
The main challenge was to make sure that someone who had never read the book, or who was a bit clueless about the book, would feel welcome and understand Paul’s journey – that there were enough elements to help them understand who is who. And at the same time, to make sure that someone who is a hardcore fan of the book will find the beauty of the ideas, the depth and poetry that are in the book.

So that was a challenge, to make a movie for both kinds of audiences. And me, I’m a hardcore fan, so I was there to be the guardian of the book!

But to try and bring the novel to, let’s say, my mother, that was the challenge: to make it as playful and simple as possible, with the softest introduction. That’s why the main moment that is in the movie that is slightly different from the book is the opening. That was where we had a lot of work to do. 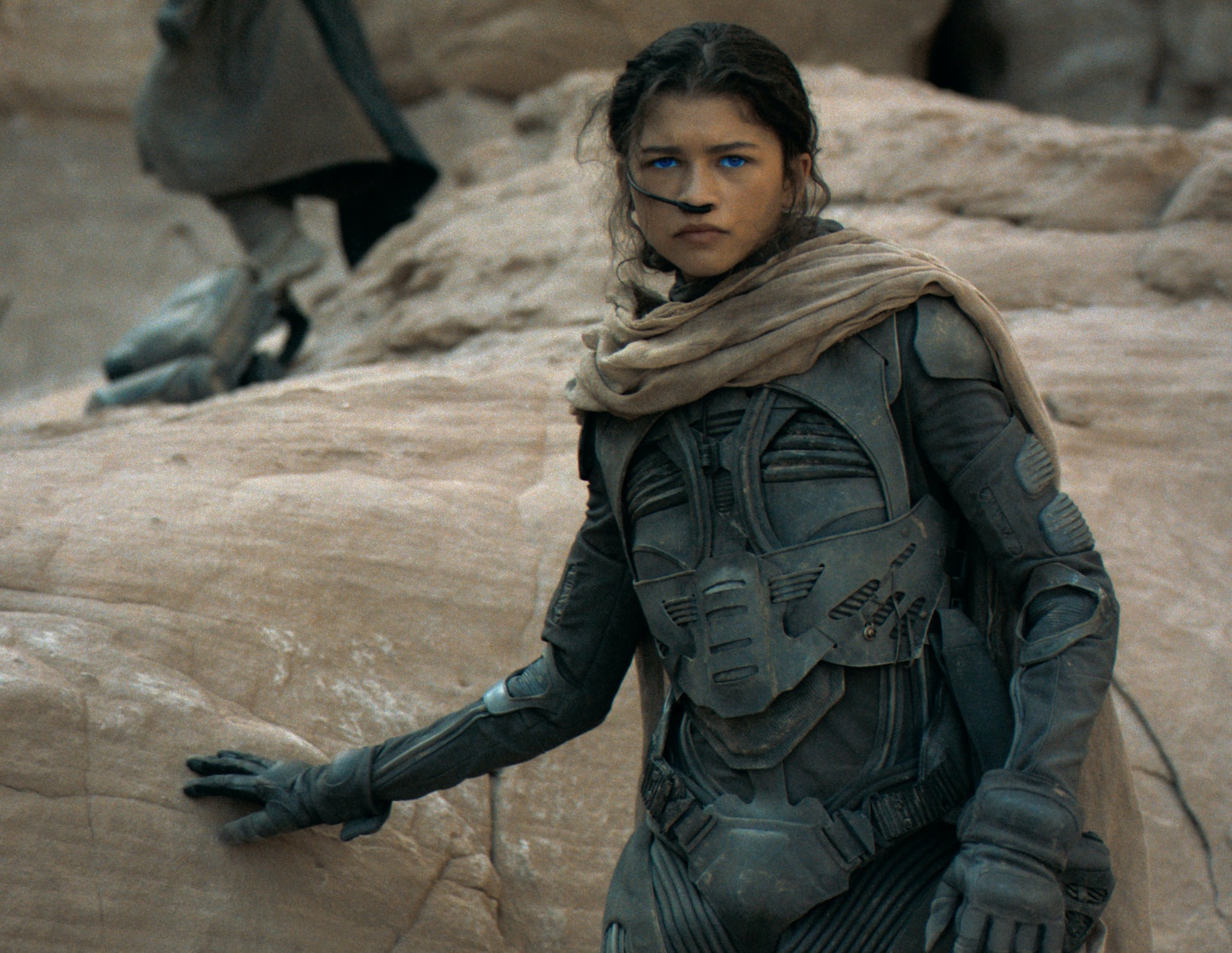 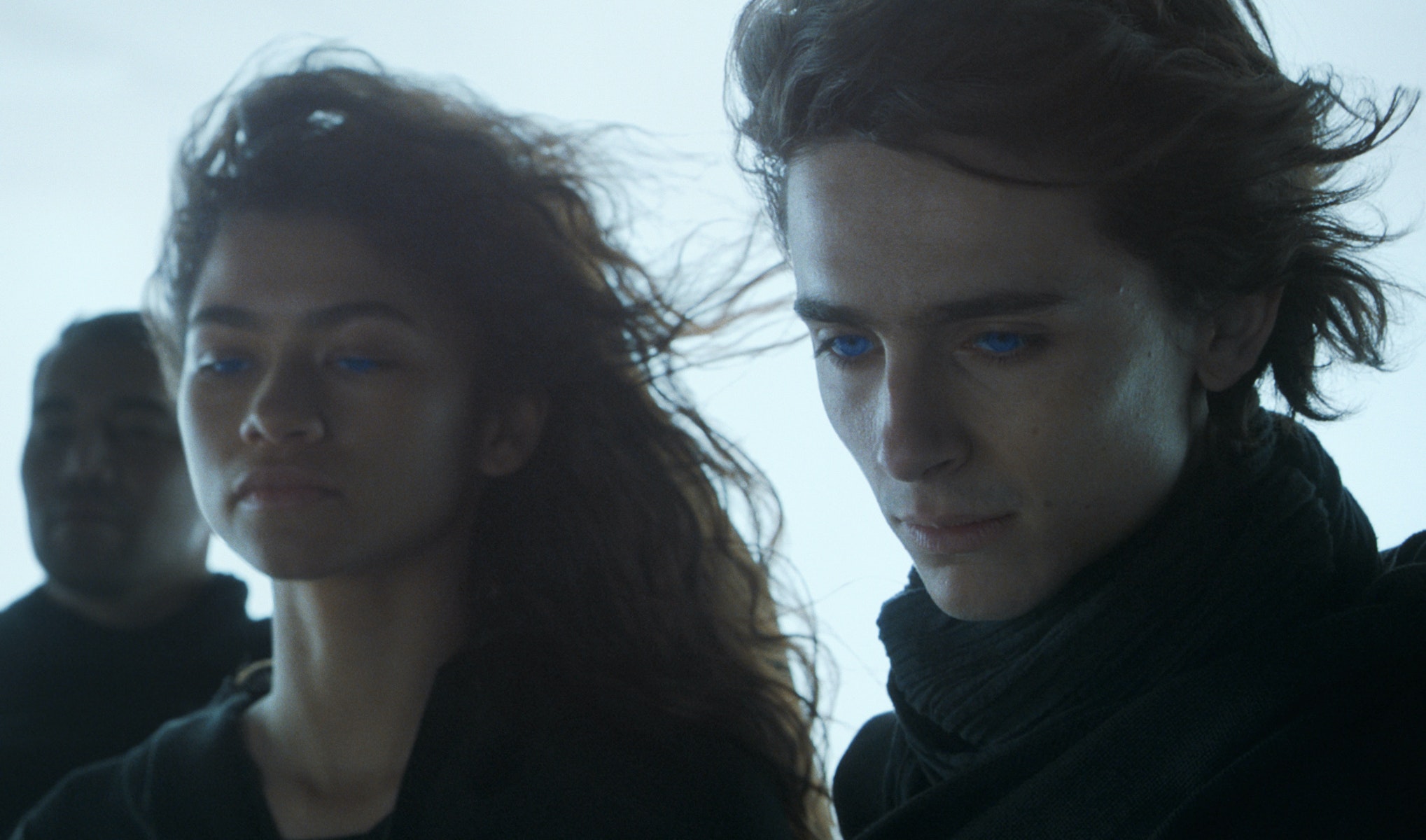 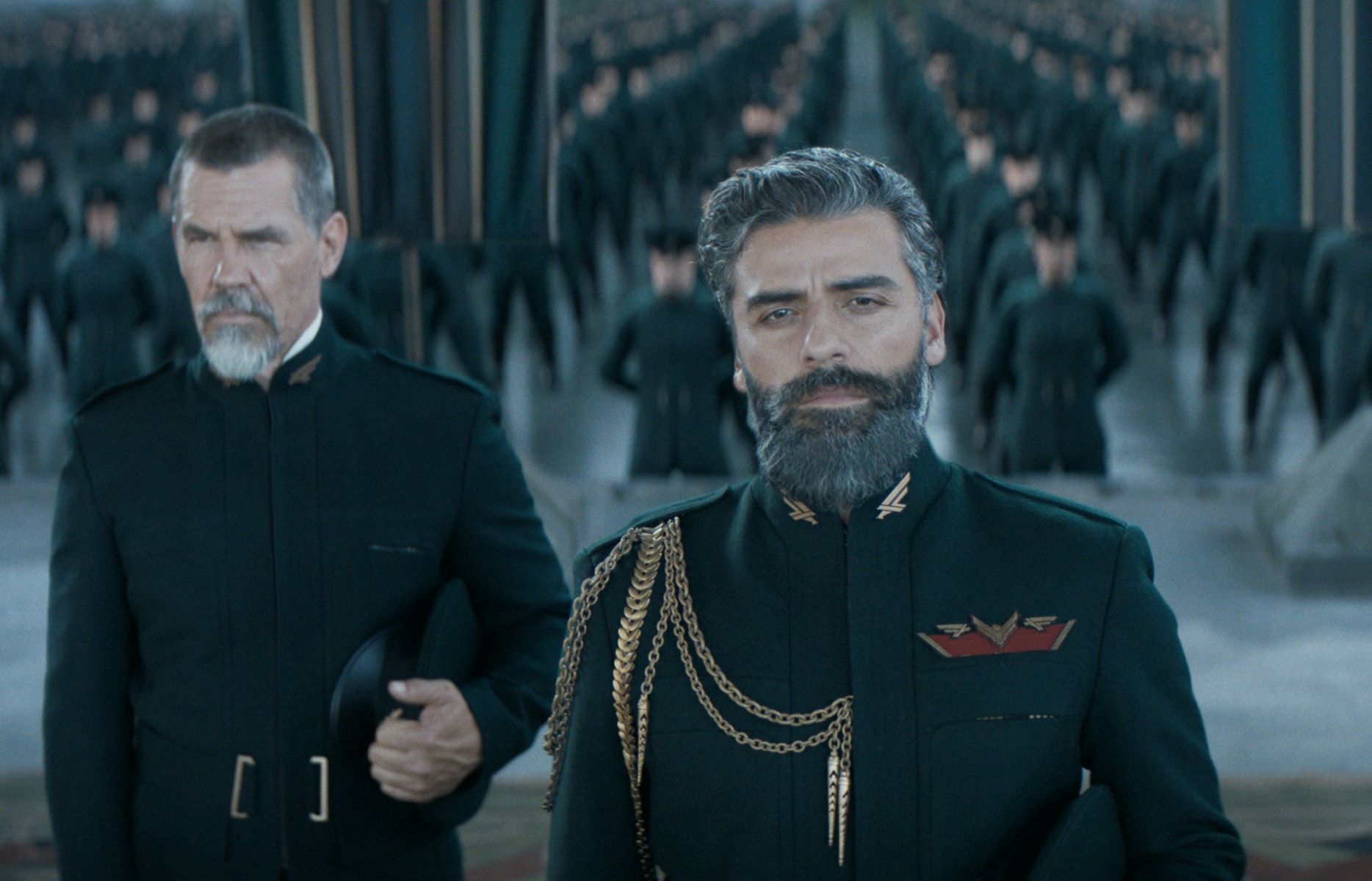 For anyone who’s not read the book, what is that difference?
The book introduces us to this world through the voice of a specific character who is not in the [film]. And the book also starts with Paul being awakened in the middle of the night by his mother to go for the Gom Jabbar test. In the movie, there is a full prologue where we meet Paul’s father and mother and we see him in a more everyday life context. And the transfer to planet Arrakis will be expressed through a ceremony.

These elements were required in order for people who don’t know the book to understand what will happen after. If we had started with the Gom Jabbar, people would get totally confused.

What made Timothée Chalamet your perfect Paul Atreides?
Timothée has an old soul. He has a deep intelligence. It is something that is reflected in his acting. He’s a very mature and calm young man – and at the same time, he looks tremendously young on camera. Sometimes [cinematographer] Greig Fraser and I were thinking he looks 14 years old. And I think that combination, that contrast, is Paul Atreides.

Also, Timothée has the charisma of a rock star. And I will need that charisma later because if we ever do such a thing as Part Two, the audience will need to believe that Paul has enough charisma to fool the population of a whole planet and lead them into a holy war – he will become like a dangerous, charismatic figure. So I needed someone who will have these [qualities].

Will he make a good Willy Wonka?
I’m less familiar with Willy Wonka, but I will say this: he is a chameleon. He is a very, very unique and rare talent. I mean, he’s a beast. He’s a very impressive actor – I witnessed things as I was doing Dune that I was mesmerised by. I have deep pleasure watching all his movies, and I can’t wait to see what he does with other directors.

The production and sound design are incredible. And by that I mean: credible. How important was it for you that audiences would believe in the substance of the buildings, spaceships and planets?
I take science fiction very seriously. I don’t like fantasy but I love science fiction. It’s important for me that the audience would believe in the vehicles and the architecture. Under every single design in the movie, there is a logic. We were aiming either to create some specific emotions or to ground the technology in a reality, into an ecosystem – like Herbert did with everything he wrote in the book. You need to believe that the ornithopter can fly for real. They are designed as real helicopters. It’s really the work of industrial design; it’s not a fantasy design.

My production designer Patrice Vermette and I really focused on this idea that everything needed to look real, to fit with the laws of physics and gravity – and even, I would say, look familiar. Meaning that I wanted sometimes to go away from the exoticism and just create things that will be impressive but not be in the way of the ideas. I wanted to ground the movie in reality, so people would go on board and embark on a journey and believe in the characters’ emotions and their emotional journey. That was fundamental. 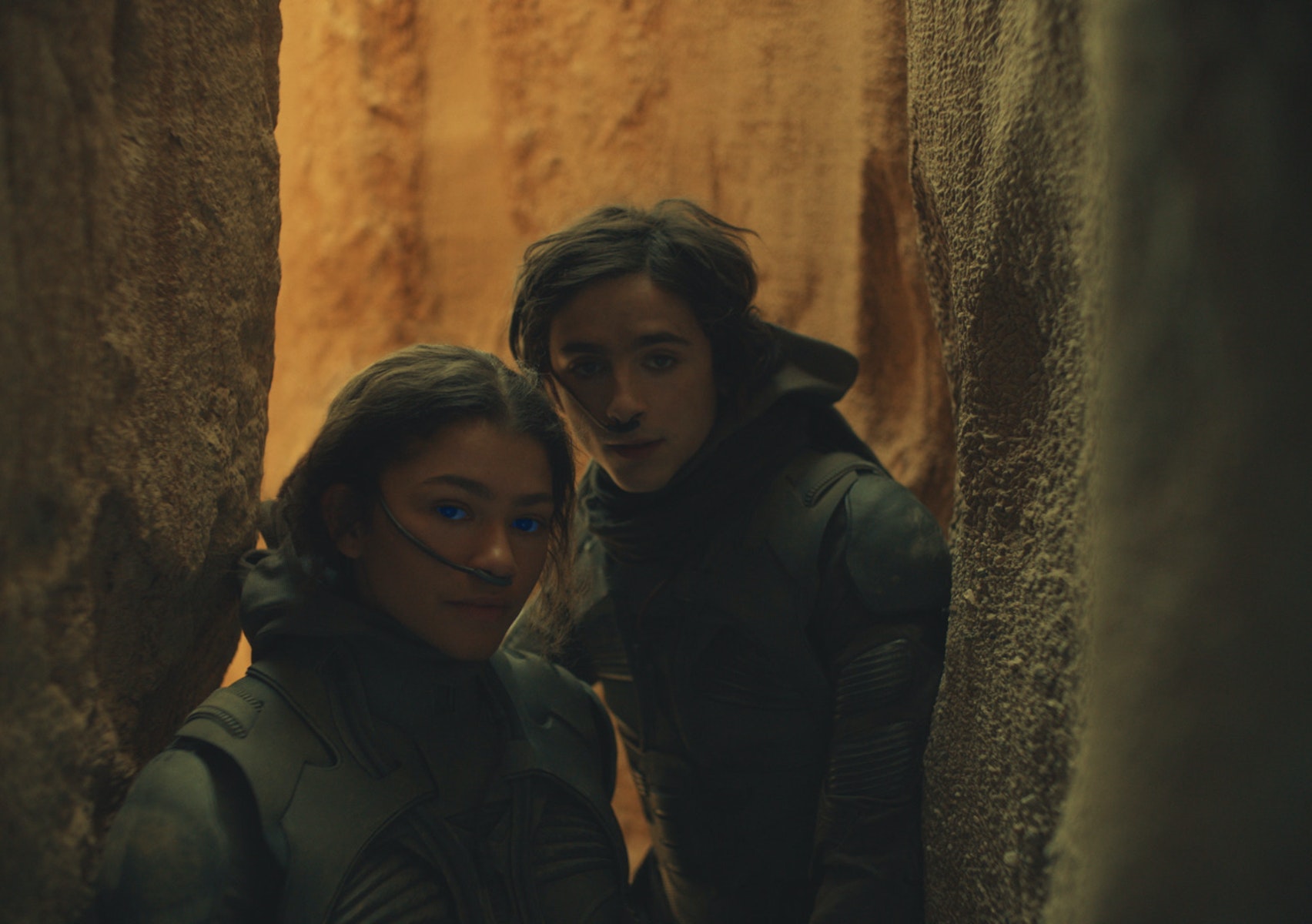 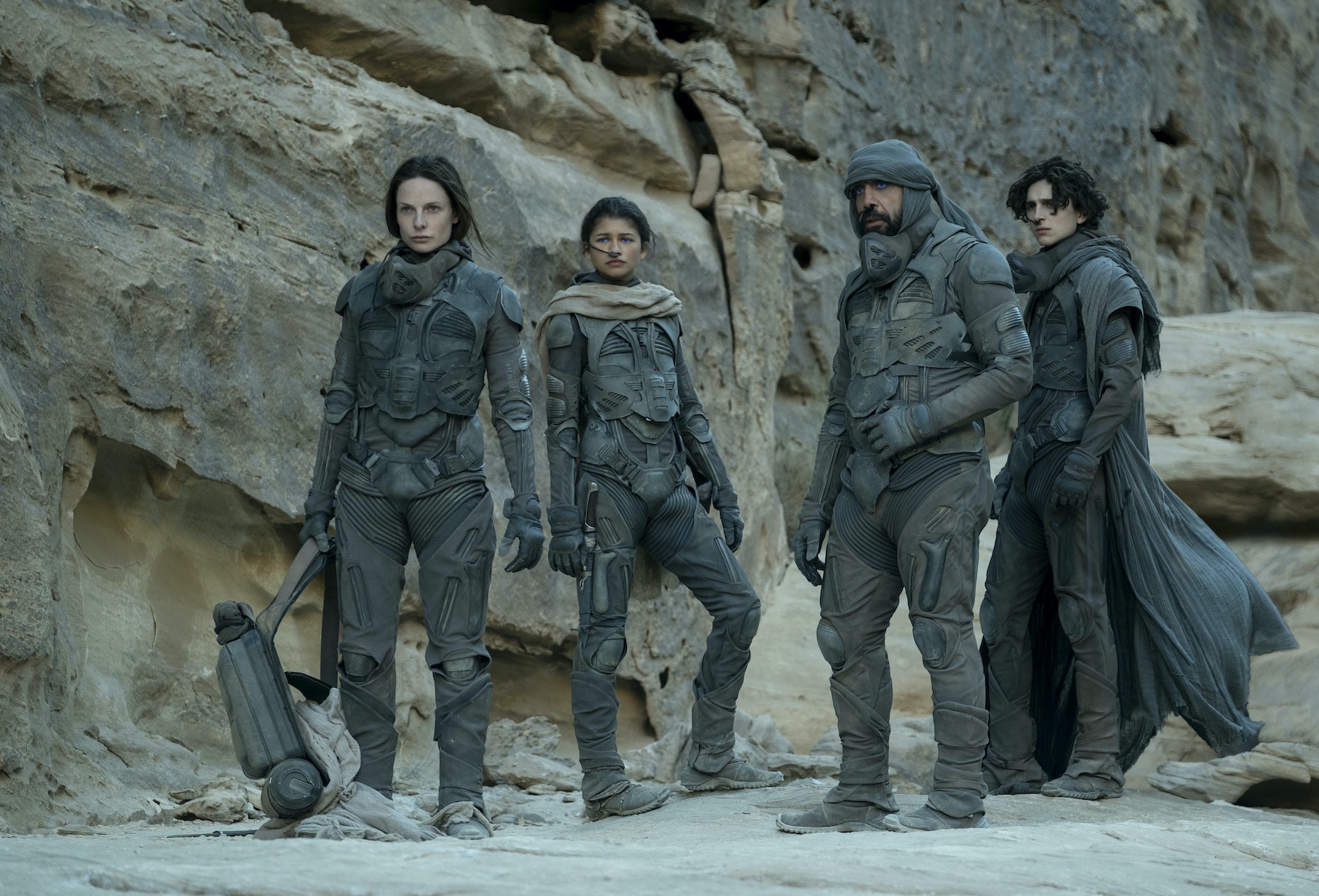 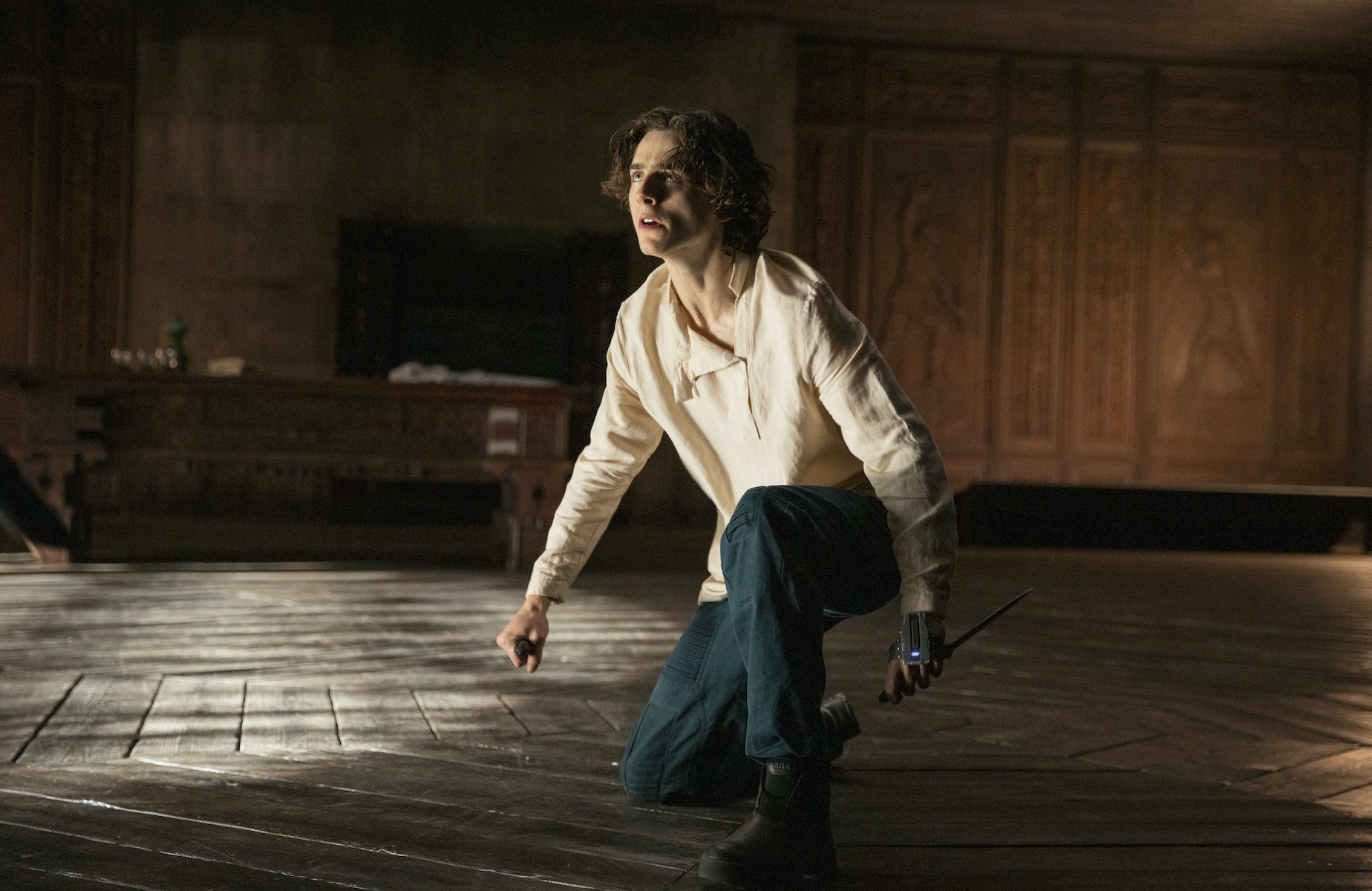 What can you tell us about the journey of Zendaya’s character Chani in Part Two?
Usually, I don’t like to talk about movies before they are being made. But I will say for certain that the reason why I [cast] Zendaya and Javier Bardem in Part One is because they both know that they will have prominent roles in Part Two. Part One is the story of a boy who is foreseeing people, and at the end of the movie, he finally meets them.

In the second part, he will live with them and learn the ways of these people. So definitely there will be a big chunk of– I don’t know if you can say that in English, sorry! But definitely, Zendaya’s part will be prominent in the second one, for sure.

In terms of her casting, which of her previous roles really spoke to you?
I remember seeing her in the Euphoria pilot – I had the privilege to watch that. But what convinced me really is when I met her and did some camera tests with her and Timothée. I was amazed by her acting skills. She totally understood who the character was, and she made me believe that she could be born in the middle of a desert and raised in a rough environment.

So it was really through the casting process that I would say, not discovered, but met Zendaya, and started to work with her in little laboratories of acting. And I was very impressed. Then later on I realised, as I was working with her on set, that she was an insane [talent]. How can I put it? She’s a camera beast. The camera deeply loves her. She has a presence onscreen that I’ve rarely seen. And I started to improvise more shots with her – I was just adding more and more work with her because I was just deeply inspired by her presence.

Have you had the green light for Part Two?
Not yet, sir. But hopefully it will happen soon.

Finalement, Denis: if you could get your hands on some spice, what would you use it for?
Haha, that’s a good question! I’m not sure that I would like to know the future, frankly. But I would like to live for a long time. So probably I would use it to have a longer life. I could use that. I’d be OK with that. I love life!

Dune is released tomorrow. Go see it on the biggest screen you can find. Then go see it again.