Juergen Teller is tanned, smiling and wearing his trademark neon short shorts (today, they’re hot pink), sitting before a huge wooden table in his West London studio. There’s a lot of concrete here. The walls are smooth and greyish, and the floors are shiny and polished. The ceilings are high – still concrete – and his work is everywhere. Individual photographs line a table that’s twinned with the one we’re sat on, arty books are piled on a bookshelf and a giant plate printed with a self-portrait of Teller holding a baby leans against one wall.

“We just got married in Naples,” he says, as his new wife and creative partner, Dovile Drizyte, types away on a MacBook at the far end of the table. ​“Then we went on our honeymoon. We rented a car and drove down to Calabria, stayed in three different places and then Sicily for a week. It was excellent.” That explains the tan, then.

Each series of photographs has a little story attached to it – some funny, others sad, but all revealing a bit about Teller. The titular Donkey Man, for instance, tells the tale of how he narrowly escaped being raped while on a donkey ride in Turkey during the ​‘80s. Why did he choose this story to reflect his book? ​“I wanted to make it intriguing,” Teller says of the cover photo, which is him lying naked on a donkey. ​“When deciding on the cover, it could have been anything… but I think it was good to have me on the cover with the intriguing ​‘Donkey Man and Other Stories’.” And the other stories are equally surprising, ​“whether [they’re] written words, fairytales or picture stories.”

There are anecdotes from his past collaborators, too, from model Kristen McMenamy to Vogue Editor-in-Chief Edward Enninful. ​“Right from the start, I felt completely free to express myself with him,” writes McMenamy, who has been the subject of Teller’s photos since they first met backstage at a Helmut Lang show in the early ​’90s. 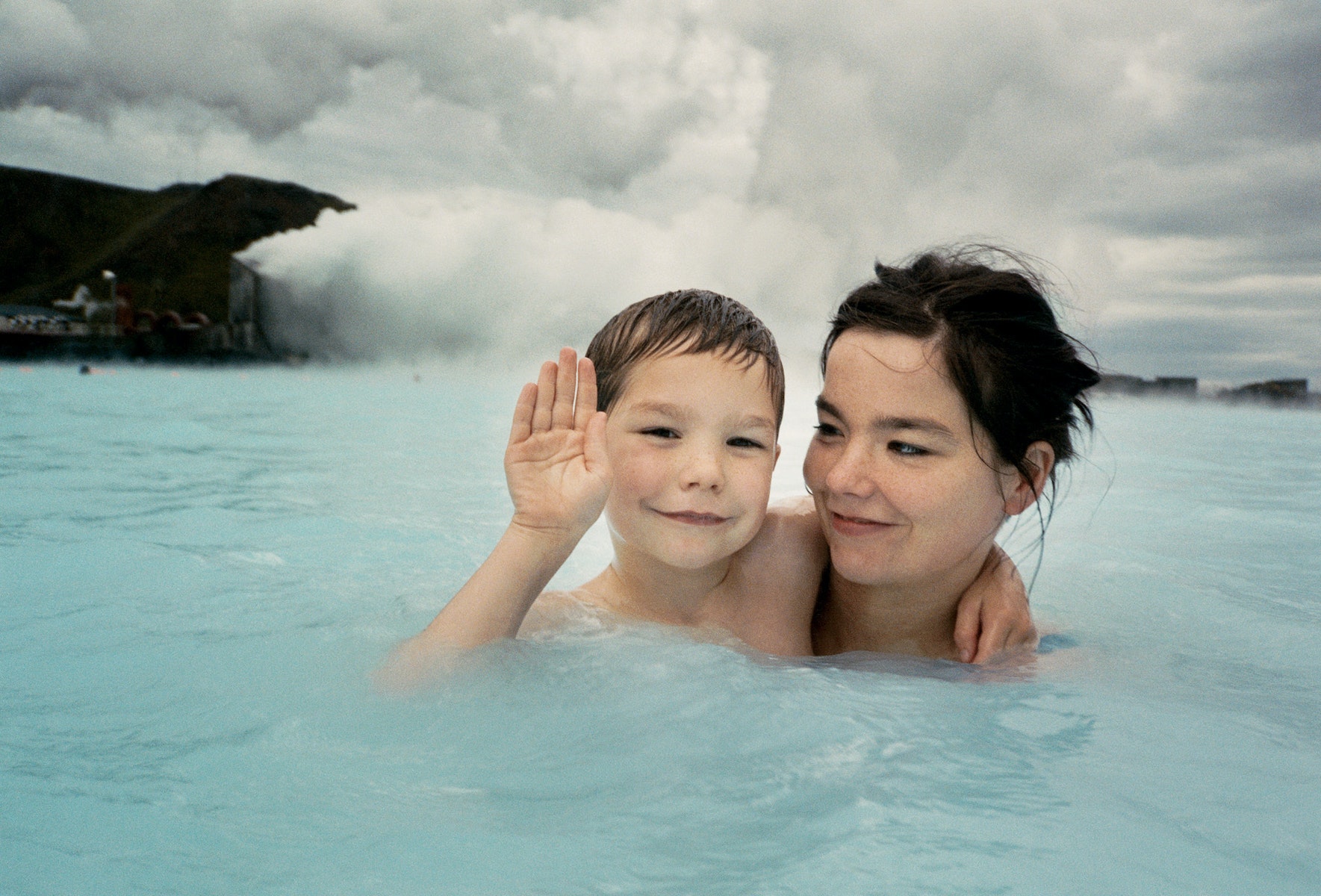 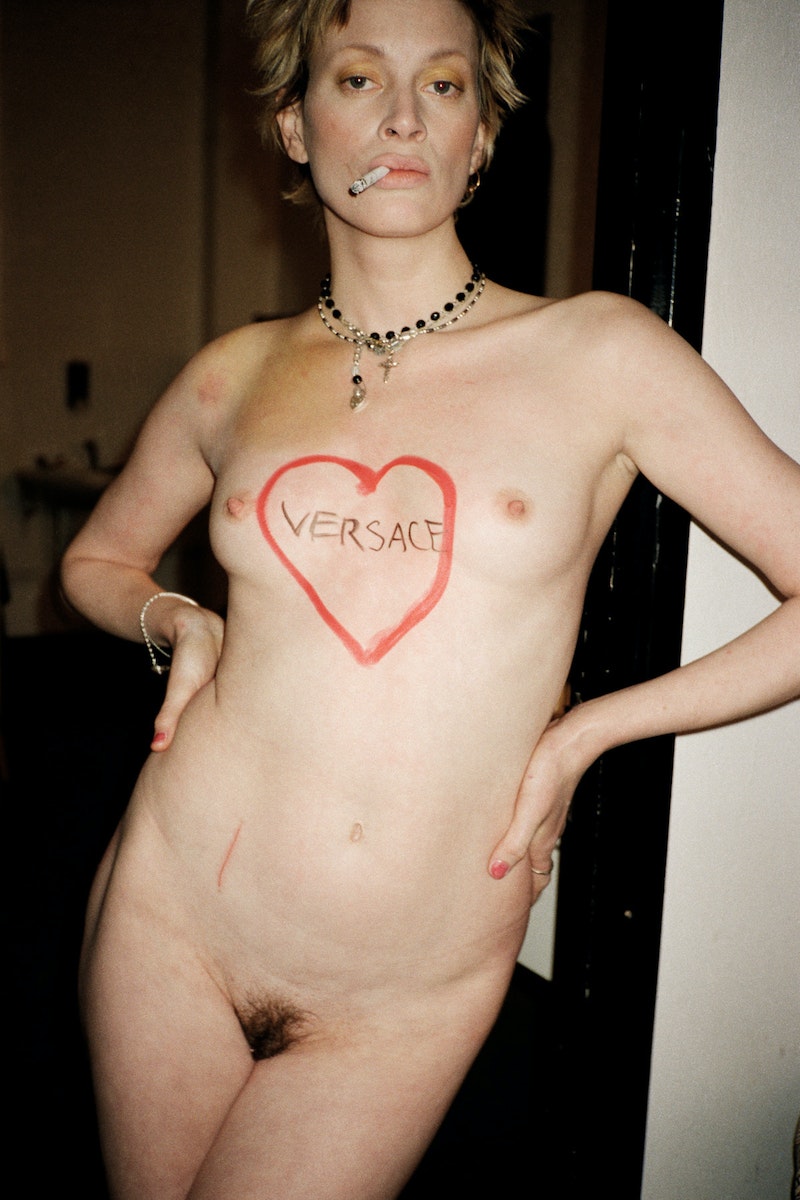 Arguably the most famous image the pair have created together is ​“the Versace one”, in which McMenamy is standing naked, cigarette hanging from her mouth and hands defiantly resting on her hips, with Versace written in between her breasts and a red love heart scrawled around the letters. Legend has it that the photo was taken after the model was cancelled last-minute from the 1996 Versace show. Not quite…

“This is what she says,” Teller says about his friend. ​“My understanding was that she went to the Versace job, they tried to put the zipper up and it cut into her flesh, and that became the scar [Teller points to the red scar on her torso].” McMenamy went to show Teller, drew the now-famous Versace emblem and that was that. Magic was made in the midst of the ​’90s realism movement. Vacant stare, no touch-ups, no airbrushing and, in this case, no clothes.

Nudity is a recurring theme in Teller’s work. A written segment in the early pages of the book, Naked, nude, and beyond, sees art historian Kenneth Clark’s address the distinction between nudity and nakedness. ​“Nudity belongs to an aesthetic pattern while nakedness merely signals that one is shown the bare thing – the bare body,” the passage explains. ​“Teller’s photographs defuse that tension. The photographs of people with no clothes on can hardly be described as ​‘nudes’: they do not aim to present an image of normative, commodified beauty.”

In his time, Teller has shot naked pictures of Helen Mirren, Vivienne Westwood, Lily Cole, Lara Stone and himself – many times. But as he points out, ​“within the percentage of nudes in the book, it’s actually not so much.”

Still, there’s something special about a Teller nude: the natural light, imperfections on the skin that are left untouched, the occasional brutality of his lens. His nudes are never stylised; always candid. ​“I guess one is attracted, simply, to flesh. To the colour of the skin, the muscles… it’s interesting how a body functions,” he says.

Much of the book, unsurprisingly, deals with Teller’s fashion photography, ​“which means clothes and appearances and how you hold yourself.” Shooting naked pictures came as a surprise to Teller, since he’s actually really shy. ​“It would never have occurred to me to ask somebody to photograph them nude. It was actually always the hair and makeup people who would say ​‘Oh my God, that would make an incredible nude.’” 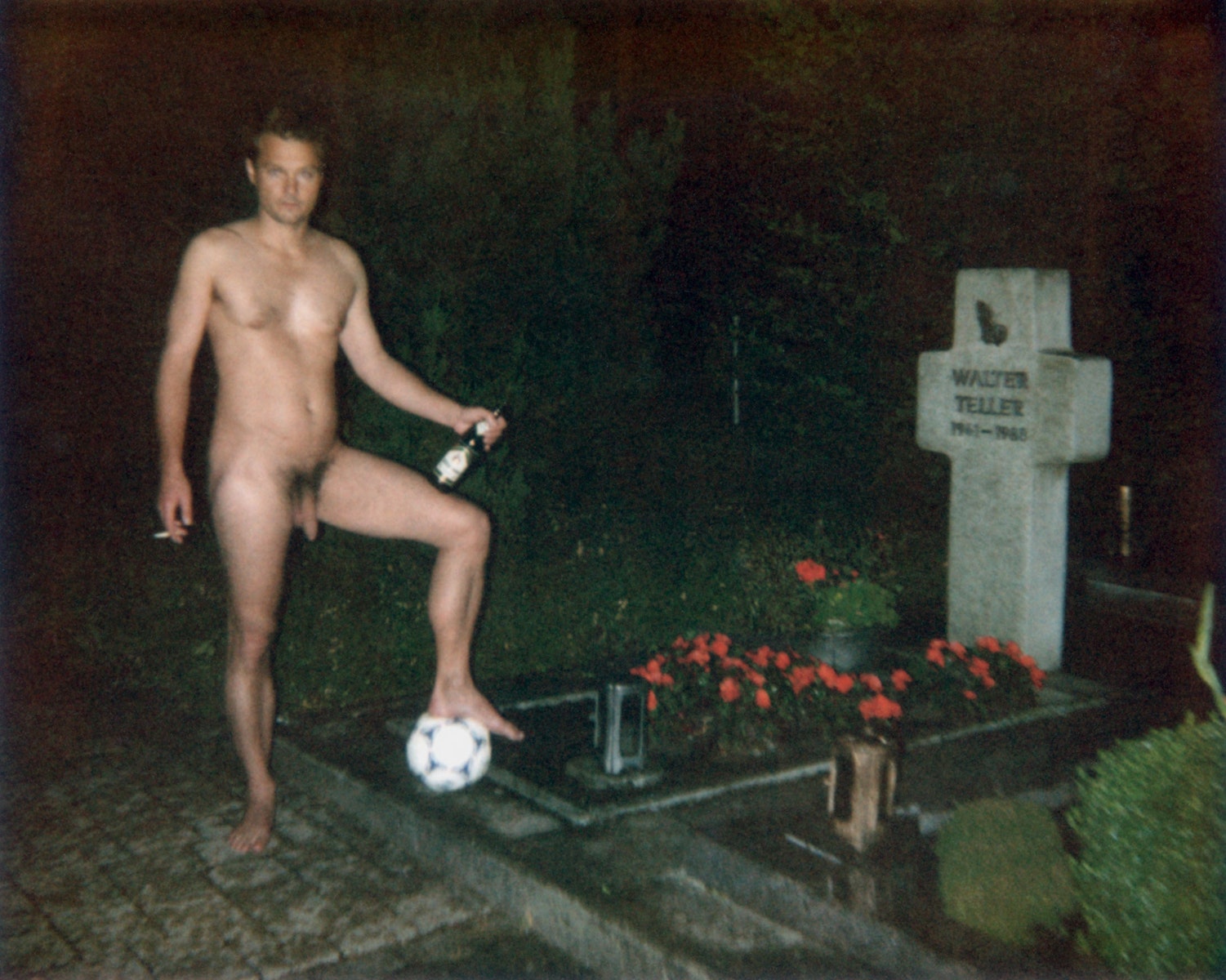 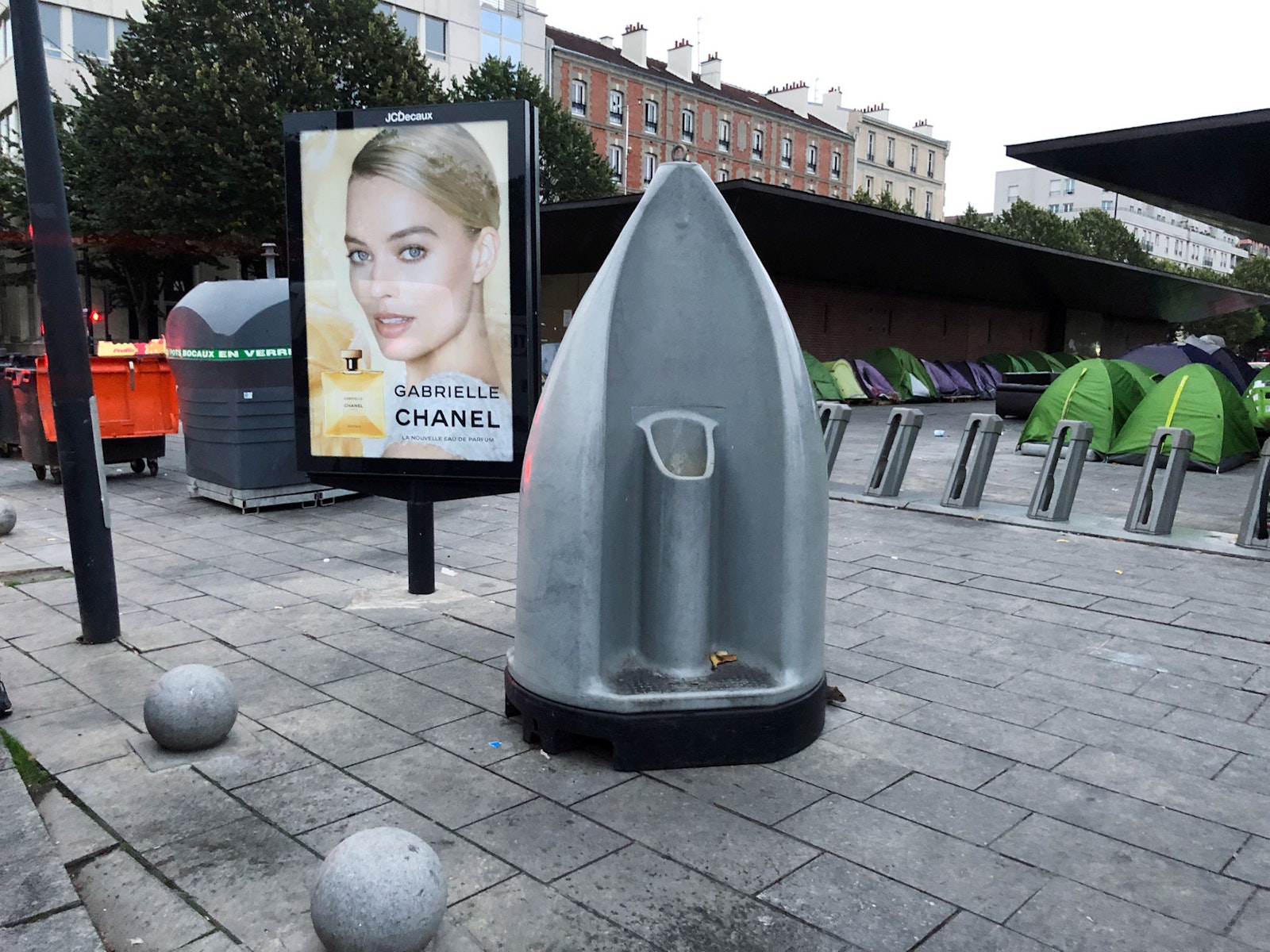 One occasion when Teller plucked up the courage to pop the question was on a shoot with actress Charlotte Rampling for a 2012 Marc Jacobs campaign, in which the photographer would also be starring in the images. In a story titled Too Fat for Fashion in the book, Teller recalls how the clothes turned up and he realised ​“with horror there was no way I was going to fit into what I was meant to wear. I was too fat.”

“I had to go to the extreme, what else was I going to do?” he says. So he sat down opposite her and suggested he could kiss and stroke her breasts for the image. Freaked out and started sweating, he was met with total silence. After lighting a cigarette, Rampling took a drag and said, ​“OK with me, but I’ll tell you when to stop.”

It made a sweet photo. A naked Teller cradled like a child by Rampling, who had bed sheets pulled up over her chest. ​“That was a wonderful photograph and a wonderful experience. We’re still friends,” he says.

Much of the work, like Too Fat for Fashion, pre-dates the explosion of the #MeToo movement. However consensual each image is – and it is – could Teller get away with asking Rampling to kiss and stroke her breasts now? For some, the ethics of photography and the tricky subject matters in his work could be a minefield to navigate. But Teller has innate integrity.

“I guess [it’s about] the responsibility of what you do with the work, what you want to say for the work and how sensitive, cruel or harsh you want to be with everything,” he says. ​“That’s something you always think about when taking a photograph.”

Is that what you always think about when taking a photograph, Juergen? ​“Not when I’m photographing my birthday cake,” he says, letting out a mighty laugh. ​“But of course, you have to be aware of the world that you are in and you have to be responsible. 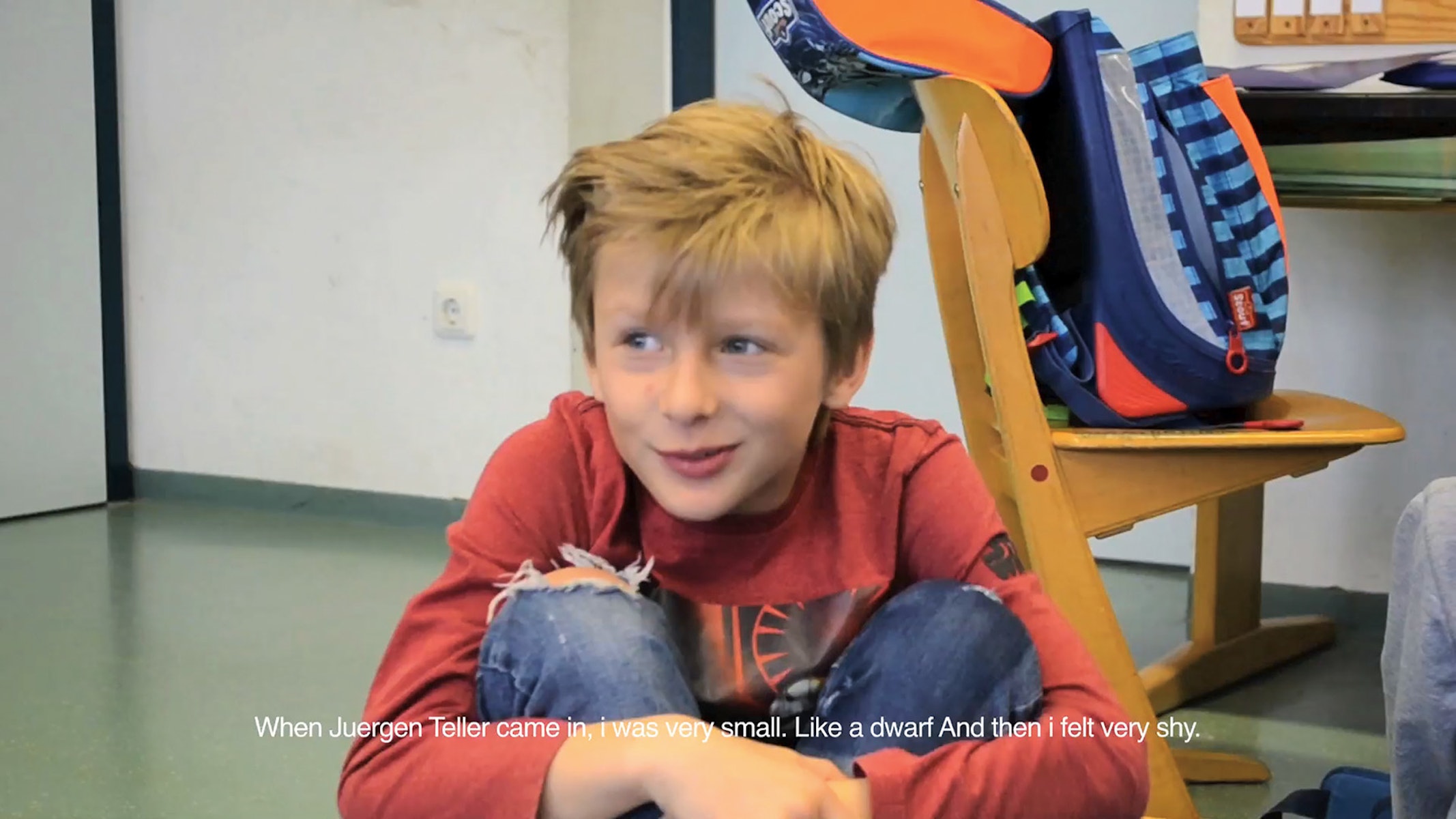 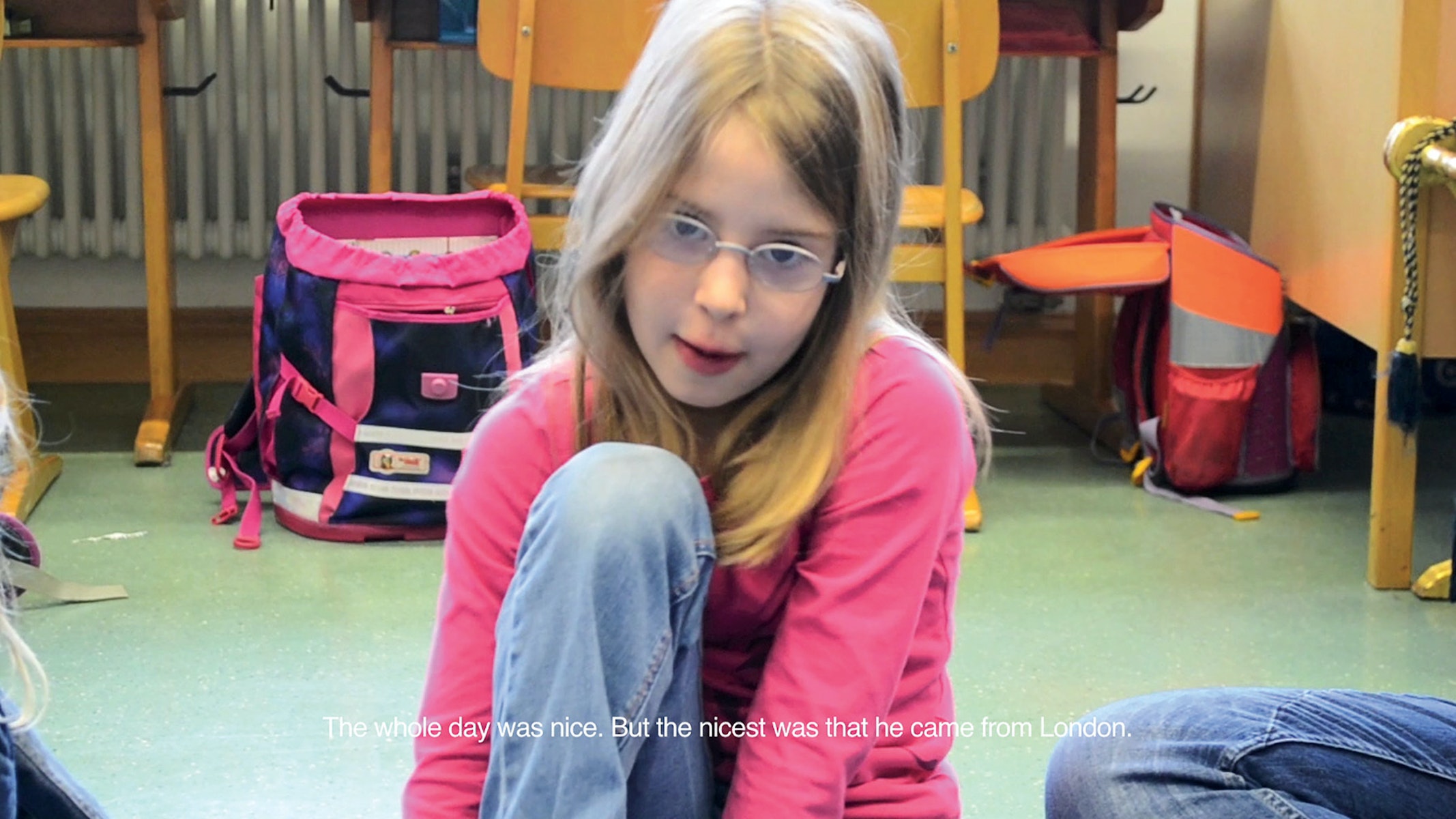 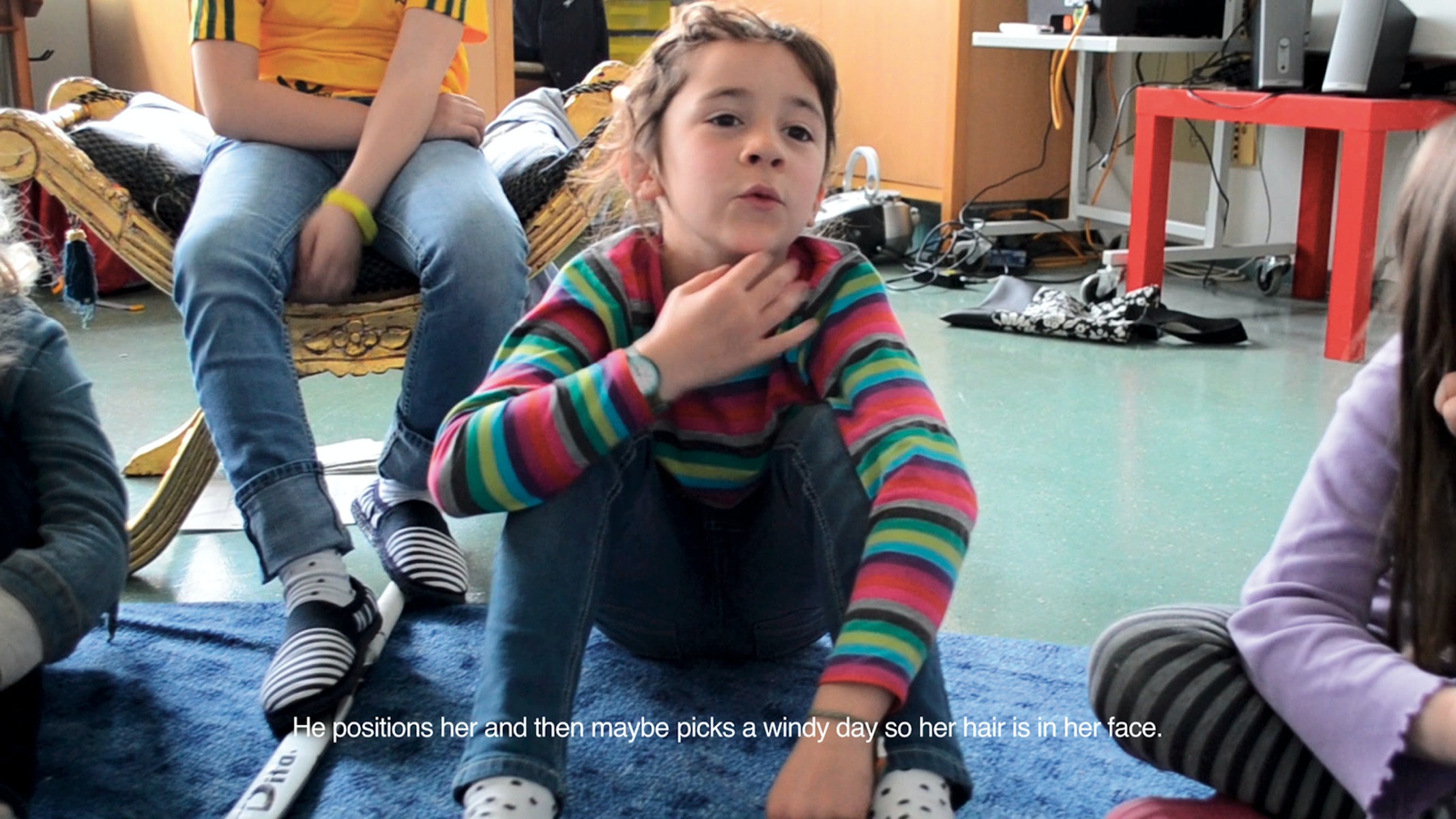 Black Lives Matter is another recent social movement has rattled the industry. But while fashion insiders have been rightfully called out for their lack of diversity in fashion campaigns, shows and glossy magazines, in some respect, Teller has come out unscathed. He brings up the lack of Black and brown models he’s witnessed since his early beginnings, visibly annoyed at the racial imbalance in fashion that’s still very much ongoing today.

“All these years, there only ever used to be white models. There were hardly any Black models,” he says. For Teller, it has always been about photographing somebody he found ​“intriguing”. That’s the magic of his work, his deep curiosity about his subjects.

​“I don’t have this ideal and I’m not pushing some rigid agenda that you have to be retouched to make a beautiful picture, or that you have to get a cosmetic job to make a lot of money. That was never my agenda. I’ve always photographed anybody on anything,” he says, vehemently.

There are touching, almost diaristic moments in the book, too. One particularly striking image sees Teller standing naked by the grave of his dad, who took his life in 1988. They had a turbulent relationship, with his dad being a heavy drinker and abusive to his mum, who Teller was very close to. His dad was very musical, playing five instruments, while his mum was sporty, well into football. He got the sporty side from his mum, not so much the musical stuff.

But Teller’s father did give him his first camera. ​“The only time he really talked to me in my life was when I was 16,” he says. ​“I was going on a hitchhiking holiday and he gave me his precious camera. I was like, ​‘You fucking arsehole. What the fuck do you want from me? And why would I want to take your camera?

“I didn’t want to carry it with me anyway. It was heavy and you had to carry films. I wanted to be free with just a couple of clothes and go as far away as possible from my parents, as you do when you’re young.

“Years later, I felt that there is something good about my dad, it’s not all negative,” Teller adds. The self-portrait was of a son wanting to be close to his father. He wanted to be near him and to make peace with him. There’s a football by his foot symbolising his mother, a beer in one hand, cigarette in the other for his dad, and Teller stood naked by the grave ​“to be pure like how you come in the world.” 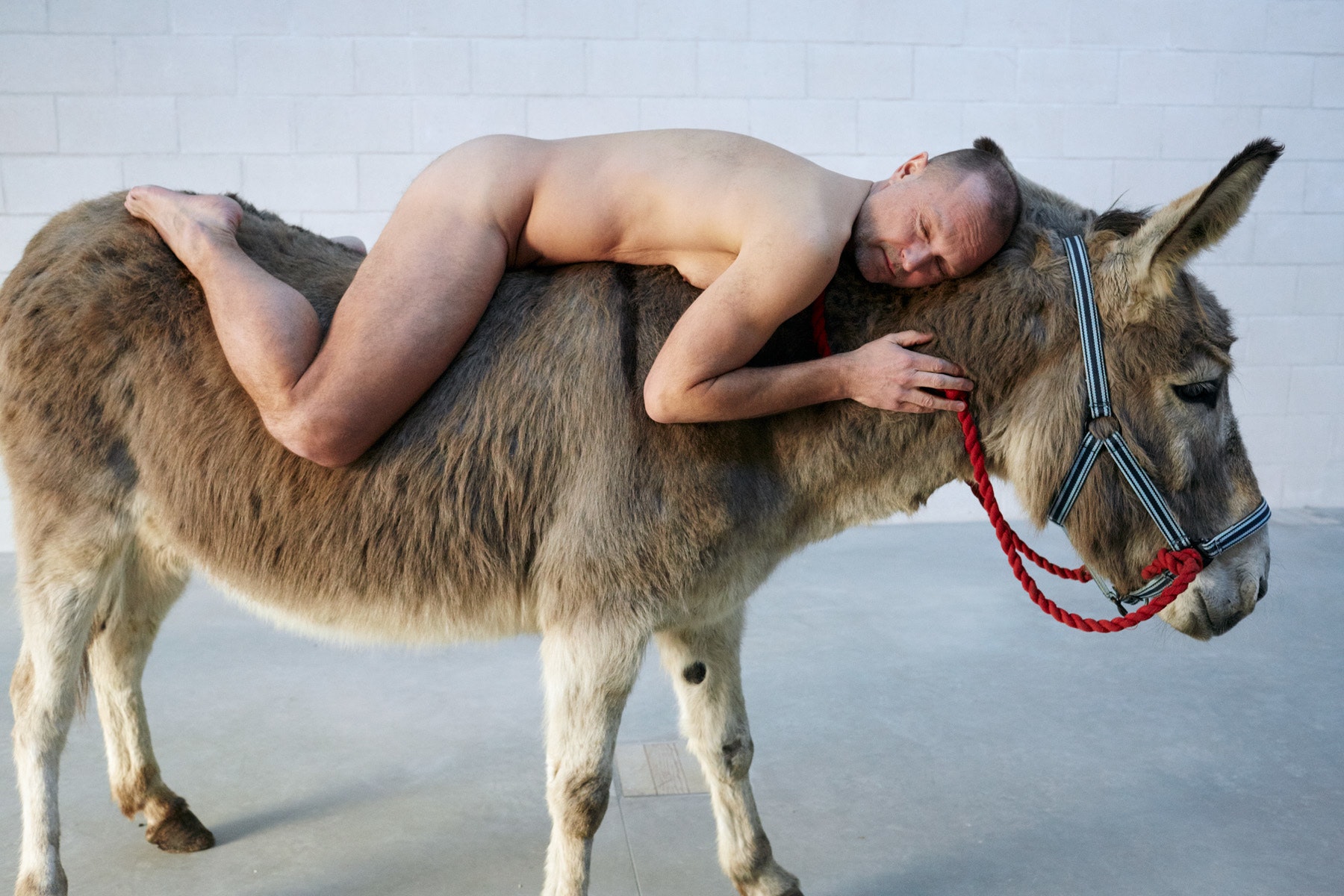 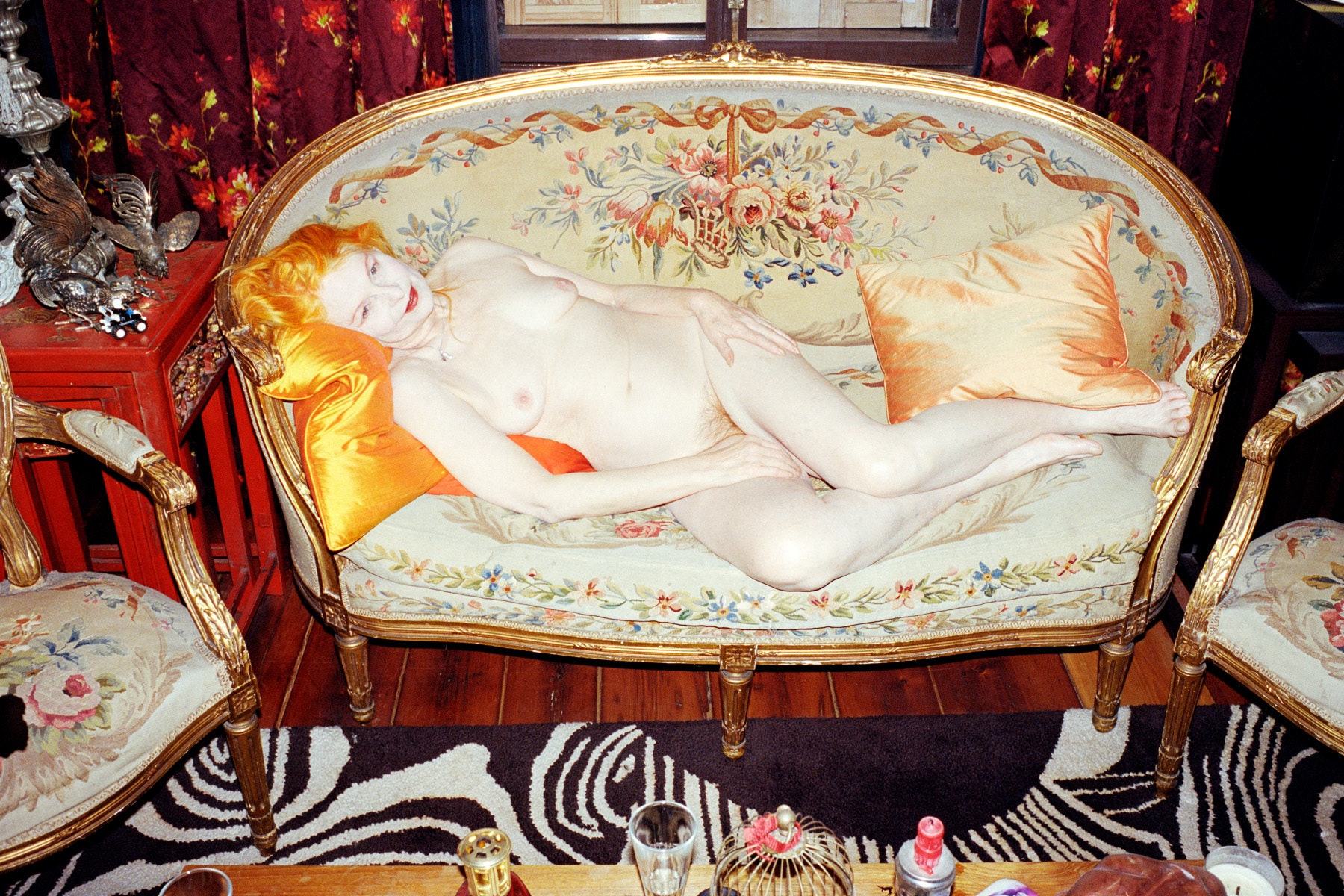 Ever since he landed his first camera, world-renowned photographer Juergen Teller has found fans in the unlikeliest places. One such place is a small primary school in the German town his mother lives in. Population: 4,500.

In 2017, Teller’s mum called him up and said something really strange happened. The school teacher from said primary school had called her up to say that the children, aged between six and seven, were really interested in talking to her about her son. ​“They were so excited about my photography and they were doing a school project,” he says. ​“I said to my mum, ​‘this sounds really strange but really interesting…’”So Teller flipped the whole thing on its head. Rather than his mum going down to the school to speak to the kids on behalf of her son, he surprised them and dropped by himself.

The kids ended up interviewing Teller when he visited the school, with photos taken of what they thought of the whole day. ​“The whole day was nice. But the nicest thing was that he came from London,” said one. Another talked specifically about his work: ​“Because actually, it isn’t even that ugly. You just think it is because you are not used to it.”

A six-year old getting Teller’s work oh-so-right – perhaps even more so than the critics – feels oddly fitting. His photographs have probed a lot of questions over the years: is it ugly? Is it brutal? Is it any good? Is it sexy? Am I weird for finding it sexy? Am I… a perv? Or, amongst the filtered glamour of Insta-hotties, are we just not used to it?

JUERGEN TELLER: DONKEY MAN AND OTHER STORIES: EDITORIAL WORKS, VOLUME 1 by Juergen Teller is published by Rizzoli priced at £115.00