“Do you want to come to a party?” Mark Hoppus asks over the super-speed drumming and muted power chords of Party Song, ​“This thing’s at a frat house, but the people are cool there.” The hyperactive track is on blink-182’s crossover album Enema of the State. The band had already achieved moderate success with their previous two offerings, Cheshire Cat (1995) and Dude Ranch (1997), which showcased a more rough and ready sound. But Enema of the State’s polished production and big budget videos launched blink-182 into the mainstream, making them a household name for blue-haired, Dickies short-wearing suburban teenagers across America and beyond. And although punk had traditionally been claimed by the counterculture, blink managed to sneak their version of the genre into the frat house.

Enlisting the help of producer and engineer Jerry Finn, who had previously helped Green Day achieve commercial success with Dookie, and an agile new drummer by the name of Travis Barker – stolen from costume-act Aquabats – Enema of the State saw blink-182 fully come into their own both as a band and a hugely popular commodity. The band’s pop-punk melodies were catchier than ever, and the album would go on to sell 15 million copies worldwide and change the course of the genre forever.

Whereas their forebears in the punk scene had traditionally positioned themselves as critical of mainstream society and culture, blink-182 situated themselves as the soundtrack to the summer of stunted adolescence that was unfolding across America. A generation of mall-dwellers ready to binge on awkward sex comedies and episodes of Jackass needed something new to listen to, and the fast-paced, foul-mouthed transmissions of blink-182 worked perfectly.

“We always tried to put our records out leading into May or June for summer; we just wanted to be that band, that summer soundtrack for your life at that time,” says Rick Devoe, who managed blink-182 for 25 years and has since worked with DeLonge since he left the group in 2015. ​“Looking back now and talking to so many people, it really was that – you got away from your parents, you went to a blink show, and you just got to escape. The pits weren’t too gnarly, it was just a lot of fun. You didn’t feel judged at a blink show… I think a lot of kids related to the lyrics in those songs, and it helped them – they used blink to kind of weave their way through adolescence”.

Lyrically, Enema of the State deals mostly with adolescent frustrations and relationships; a mix of brash juvenile delinquency and nostalgia for both the purity and the pain of puberty. When listening to the album chronologically (as was the norm in the pre-internet days of 1999), the bratty Dysentery Gary comes straight after debut single What’s My Age Again; it starts with ​“Got a lot of heartache /​He’s a fucking weasel” and ends with ​“I hate you all, your mom’s a whore”. Enema took the non-conformist and anti-authoritarianism of punk, but instead of directing the anger at systematic injustice, focused in on parents, teachers, and girls who didn’t like you. It’s little surprise the music resonated so strongly with a generation of teenagers immersed in a culture of South Park, Girls Gone Wild, and Tony Hawk’s Pro Skater. American Pie would be released in October 1999, and the first episode of Jackass a year later. This was a golden age for being a puerile little shit, and the blink boys were the sonic figureheads.

Another distinction between blink-182 and many of their peers in the punk scene was that – for all their foul-mouthed fooling around and penchant for nudity – they were (in the case of Mark Hoppus and Tom DeLonge at least), clean-cut, traditionally good-looking boys from the middle-class suburbs of San Diego. A huge part of their appeal was that they were essentially a boyband for people who liked guitars – far from being unpopular outcasts, all three were attractive, confident, and crucially, extremely charismatic. At high school, Tom DeLonge was voted Homecoming King.

The turn of the millennium was arguably the golden age of MTV and the music video, something that blink-182 harnessed to full effect. ​“Here in the states it was three o’clock every day [MTV music video show] TRL would come on and if your band made that countdown it was a big deal,” says Marcos Siega, who directed the now-iconic videos for What’s My Age Again and All The Small Things, but is endearingly humble about the impact of the visuals for blink’s success. ​“From a film-making standpoint there’s nothing brilliant about [the video for WMAA] apart from the fact that you have a bunch of good-looking naked guys who were in a band running around,” he laughs. ​“I honestly think it was a hit because it was a hit song”.

Aside from the streaking trio, the video featured adult film star Janine Lindamulder in a sexy nurse’s outfit. She would also become the album’s cover star. ​“Initially the album was gonna be called Turn Your Head and Cough, so for me it seemed obvious – there would be a nurse and she would have a glove on and she would grab your balls and tell you to cough,” laughs David Goldman, the photographer who shot the image, of the reasoning behind his idea. ​“That gesture implies a prostate exam but whatever – it’s a graphic shape. And they picked the model”.

The artwork would become instantly iconic, and go on to take the number 13 spot on Billboard’s top 50 album covers of all time. blink-182’s knack for goofing out for the camera would influence some of the biggest pop-punk videos that followed: Sum 41’s In Too Deep, Bowling for Soup’s Girl All The Bad Guys Want, and Alien Ant Farm’s Movies all depicted universes with an unmistakable blink-shaped stamp on them. Marcos is clear about the extent to which those aesthetics influenced the trajectory of pop-punk and popular culture at the time. ​“I think blink-182 for sure took a genre that had been around for a while and put it squarely in pop culture – it wasn’t until Enema of the State came out that it hit the mainstream,” he says. ​“They were profoundly influential in that way”.

It’s been argued that blink-182 eased into the mainstream thanks to their rejection of the anti-corporate and feminist principles of previous punk scenes. In her thesis ACT LIKE A PUNK, SING LIKE A FEMINIST: A LONGITUDINAL CONTENT ANALYSIS OF FEMINIST THEMES IN PUNK ROCK SONG LYRICS, 1970 – 2009, Lauren E. Levine analyses the lyrics of 600 randomly-selected punk rock songs released over four decades to examine the prevalence of and longitudinal shifts in anti-establishment, sexist and feminist themes. She notes that ​“the results showed a negative relationship between feminism and subgenres of post-punk, ska, pop punk, which all have greater ties to the mainstream music industry and tend to be more commercialised than other punk rock subgenres. Mainstream music typically reflects or expresses an already existing patriarchal culture”. 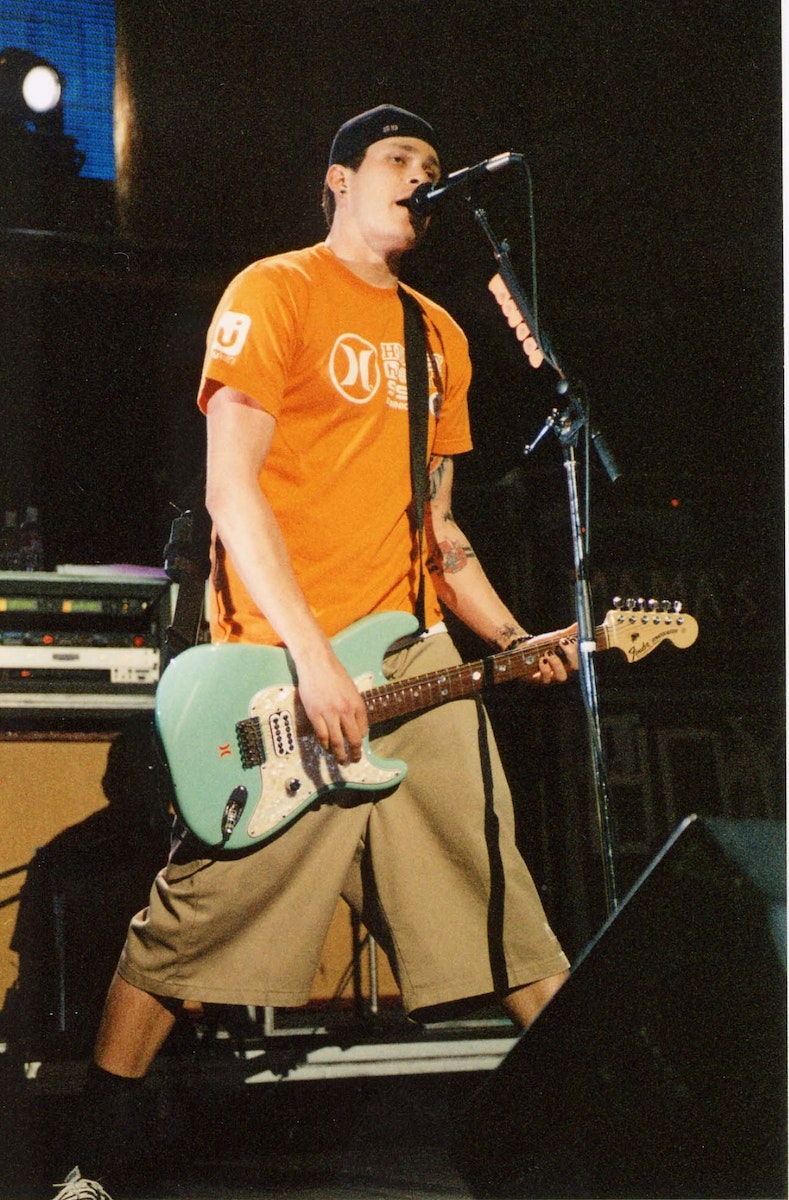 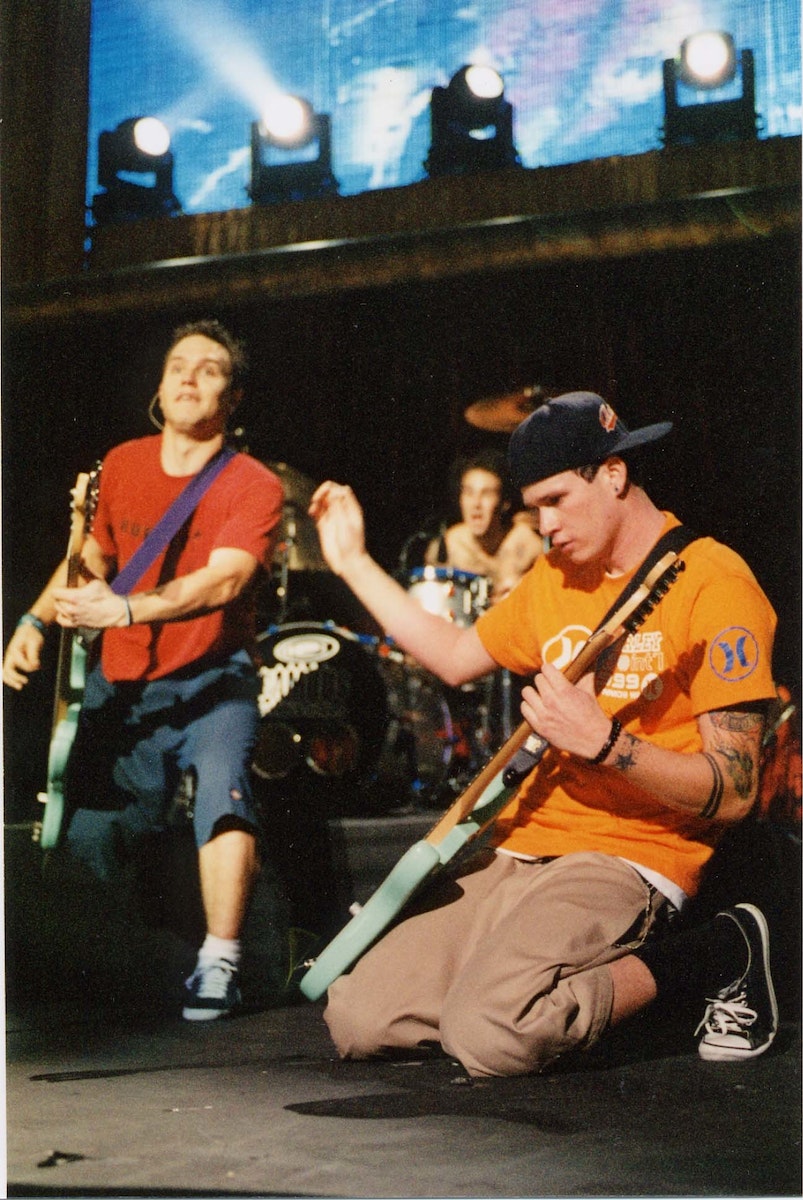 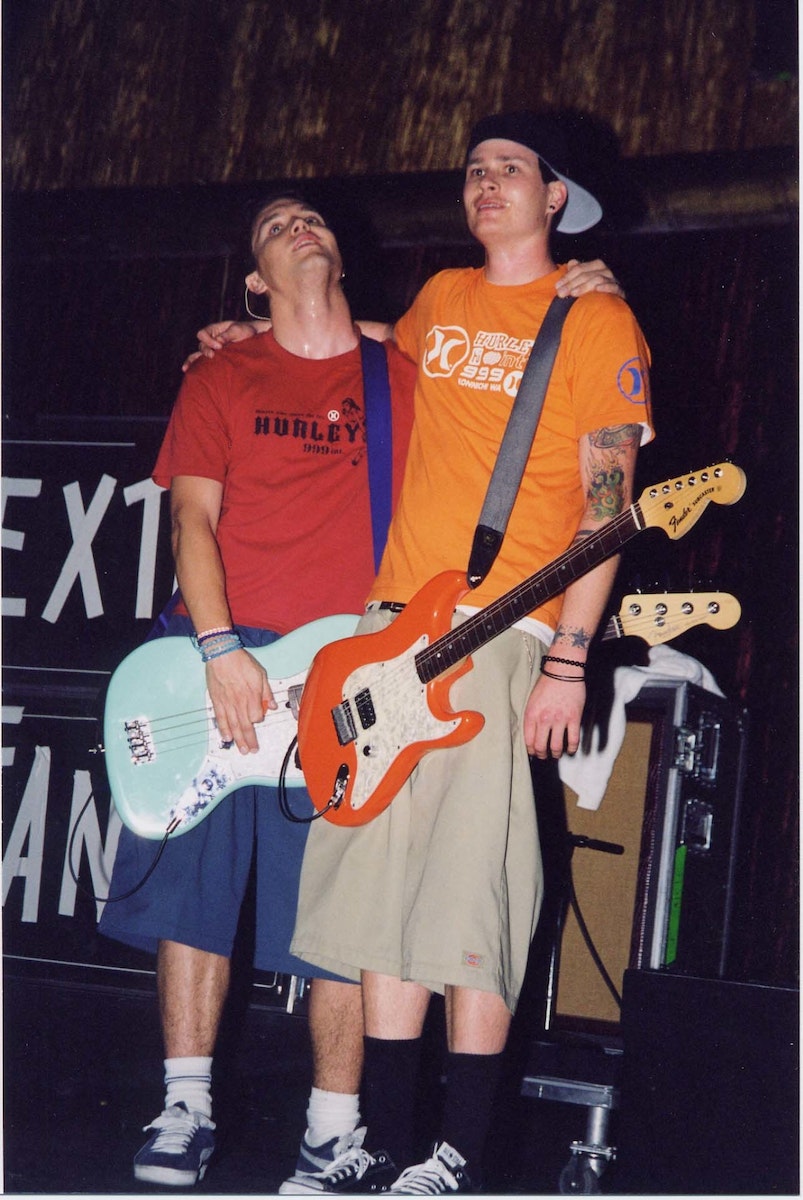 A Spin article from 1999, which sets out to find out whether the group are ​“harmless goofs or charmless jerks”, provided an illuminating insight into the mindset of the band. ​“They play for only five bucks,” DeLonge marvels during the interview when talking about the post-hardcore band Fugazi. ​“The[y] can easily go $15 and still sell out every venue and make shitloads, but that’s not what they want to do. Personally, I think that’s stupid.”

Considering this openly capitalistic outlook, it seems almost ridiculous to level accusations of ​‘selling out’ at them. For better or for worse, blink-182 didn’t share the ideals of the more virtuous punk scene, and with Enema of the State, were actively looking to break the mainstream, have a commercial hit record, and ultimately, get rich. The band were inextricably tied to the hyper-sponsored corporate world of the Warped tour, and the billion-dollar extreme sports industry that propelled it. ​“blink came from the punk-rock scene, but they also came from the surfing scene and the skateboard scene, and it was all flourishing at that time,” remembers Devoe. ​“We did the Warped Tour when it was at its peak. blink just got in there early enough in the mid-‘90s to sow the seeds, and once we got our shot working with MCA Records it was the perfect storm.”

The album’s take on teenage sexual anxiety wasn’t exactly one of romantic nuance, and confusion about how to get girls often led to sneering misogyny and mid-show cries of ​“show us your tits” directed at their (mostly teenaged) female fans, who were often more than happy to oblige. The male sexuality on display here is brazenly horny and juvenile; being dumped by your girlfriend because of a refusal to grow up and reacting to it by prank-calling her mum to tell her that her husband has been jailed for having gay sex. Party Song is about rejecting girls that ​“try too hard” as some kind of moral stance. On the flip side, Going Away to College is a sweet paean to the worry of losing your high-school sweetheart to university: ​“I haven’t been this scared in a long time /​And I’m so unprepared, so here’s your valentine”, croons Hoppus and Hopper over bitter-sweet chord sequences.

If you wanted to be unforgiving, it’s easy to paint the group’s frat-bro misogyny as a reaction to the decade of riot grrl feminism and increasing visibility of women in punk that preceded Enema of the State, a phenomenon described originally by academic Susan Faludi as ​‘Feminist Backlash Theory’ in 1991 – which argued that gains in feminism and power for women are often followed by a societal backlash. And while this is probably true of the wider culture the album was birthed from, nothing about blink-182 seemed particularly sinister, or even – sorry guys – clever. It was a call to never growing up, an ode to high school and adolescent frustration, the culture of American Pie distilled into a record. Fittingly, the trio themselves would cameo in the film in a scene where they interrupt band practice to watch unknowing loser Jim strip tease via a school-wide webcam broadcast in an attempt to bed Nadia, the hot European exchange student.

blink not only cameoed, but were also on the soundtrack, along with a whole host of other pop-punk bands such as Third Eye Blind and Sugar Ray. American Pie – a film about a bunch of clumsy teenage guys trying to lose their virginities before the end of high school – was the perfect home for this emerging jock-adjacent kind of pop-punk. Whereas punk was once a subculture for alternative kids, the blink boys were very much going to the same house parties as the boys on the football team. A year later, a band called Wheatus would emerge with a bouncy pop-punk banger called Teenage Dirtbag and a video starring two of the main characters from American Pie in another teen movie called Loser.

But under all the streaking and album artwork featuring an adult film star, there was also tenderness. Adam’s Song– the album’s third single and most serious offering, dealt with depression and suicide, and sonically and lyrically laid the groundwork for the band’s future foray into emo on their self-titled album four years later. Going Away to College and Mutt also deal with the sadness and uncertainty of youth. At its core, Enema​’s success came down to the fact that middle America felt these three shirtless boys in skate shoes and knee socks understood what it was like to be a teenager in 1999: the uncertainty and hope of a better tomorrow, the frustrating and ubiquitous teenage quest to get laid, and dumb jokes about forgiving your neighbour Bob, because you ​“think he humped the dog.”