For 21-year old singer-songwriter Josie Man, making music is an unfolding of self-understanding. Beneath sing-song vocals sit vulnerable lyrics chronicling Man’s sense of difference and alienation from those around her.

Josie Man grew up in the suburbs in Orpington, Kent to parents of mixed heritages. Her dad’s family are from San Tin, Hong Kong, and her Mum is from Catford, southeast London. Surrounded by a family of both Cantonese and English-speakers, Man continues to explore her place in the world. She’s even coined the term ​“identity-pop” to describe her upbeat, sunny music.

When we speak, Man is poised to release a new track titled Little Space for Me. ​“It’s about how my Mum and Dad made space for me in their lives,” she says, reflecting on her childhood. ​“It feels like a demo, which I like because we just sang it all the way through. It was a really nice, relaxed, laid back, loving one.”

We caught up with Josie Man in between shoots to hear more.

Tell us what you’ve been up to music wise at the moment. What have you been working on?

I’ve been in the studio quite a bit recently. I’m not really aiming towards an album, but I feel like the songs will naturally end up in an album; that’s what I’m working towards as my end goal. I’ve been writing with new people, new producers and the same people that I like to work with full time.

How have you been taking care of yourself in lockdown?

I’ve been taking it by the day. It was stressing me out more trying to be in a routine. But I make sure I do a couple of things – like deep breathing – throughout the day, stretching my body and making sure that I get daylight and walk around. And also writing things down and not putting too much pressure on myself.

Is there anywhere in particular that you’ve been gone for walks outside?

Yeah, there’s a new place that my family and I go to in Beckenham in southeast London. It’s called Beckenham Place Park. It’s massive and we take our dog there. Before, if someone asked me to go on a walk, I’d be like, absolutely not. But now it really clears my mind. It’s such a relaxing way to move your body and I love that. 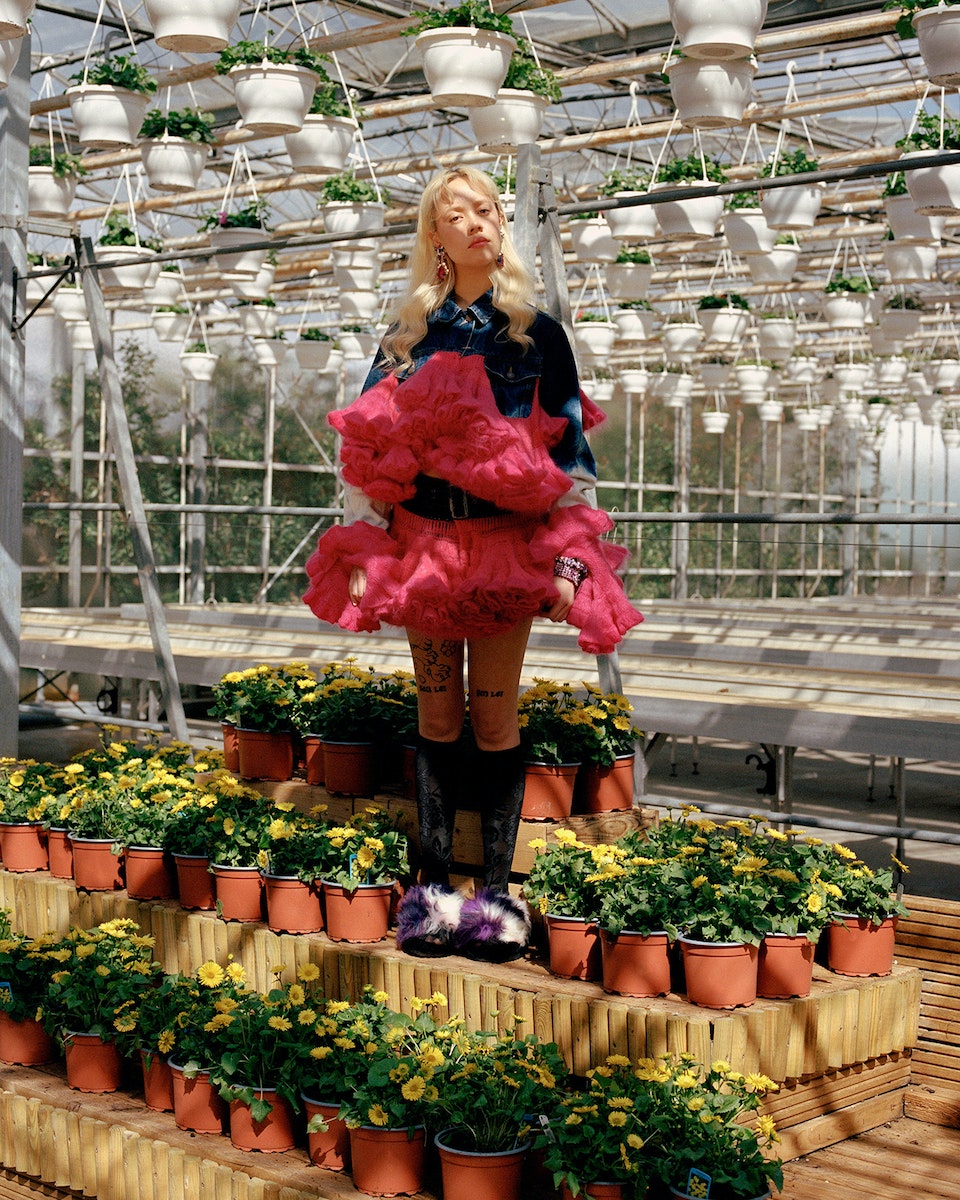 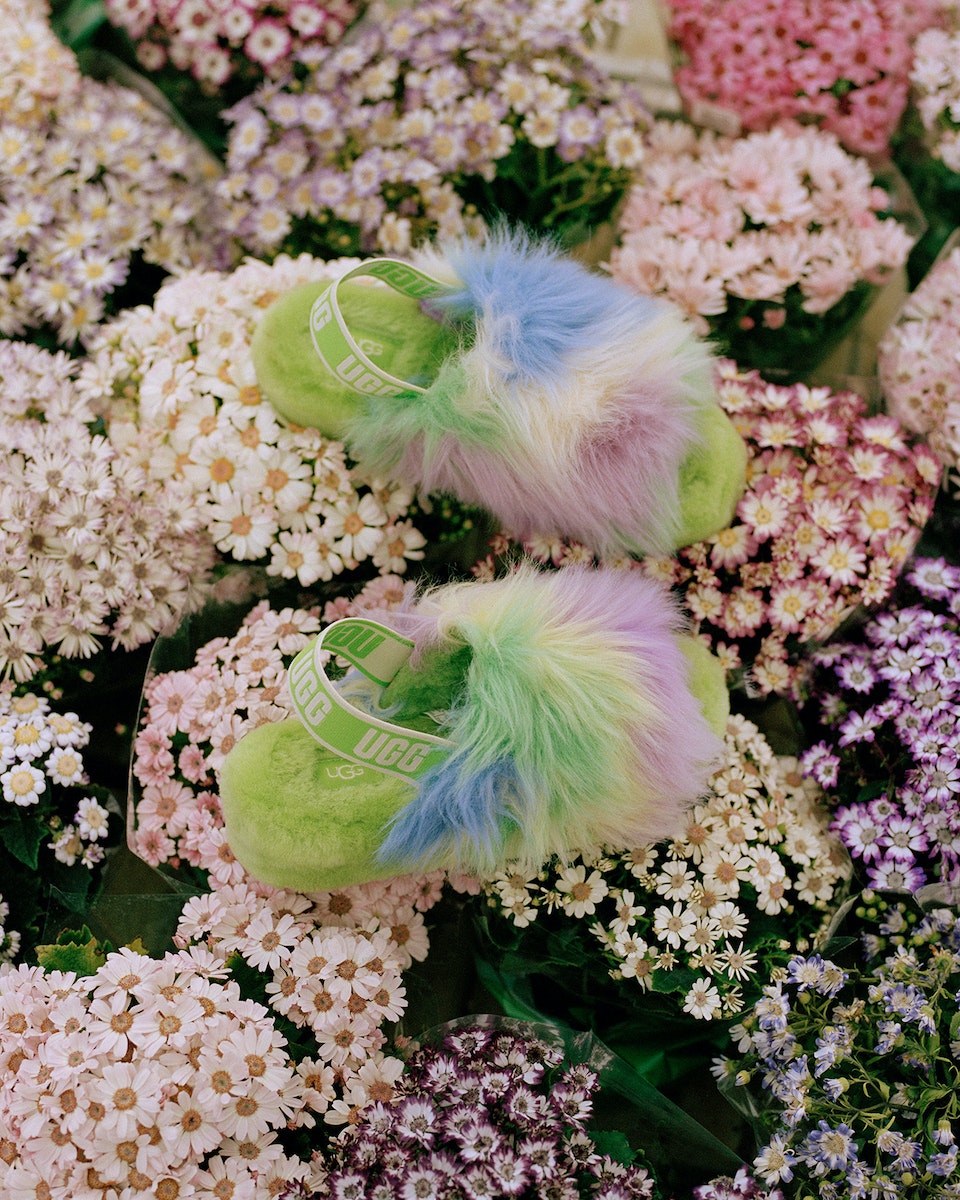 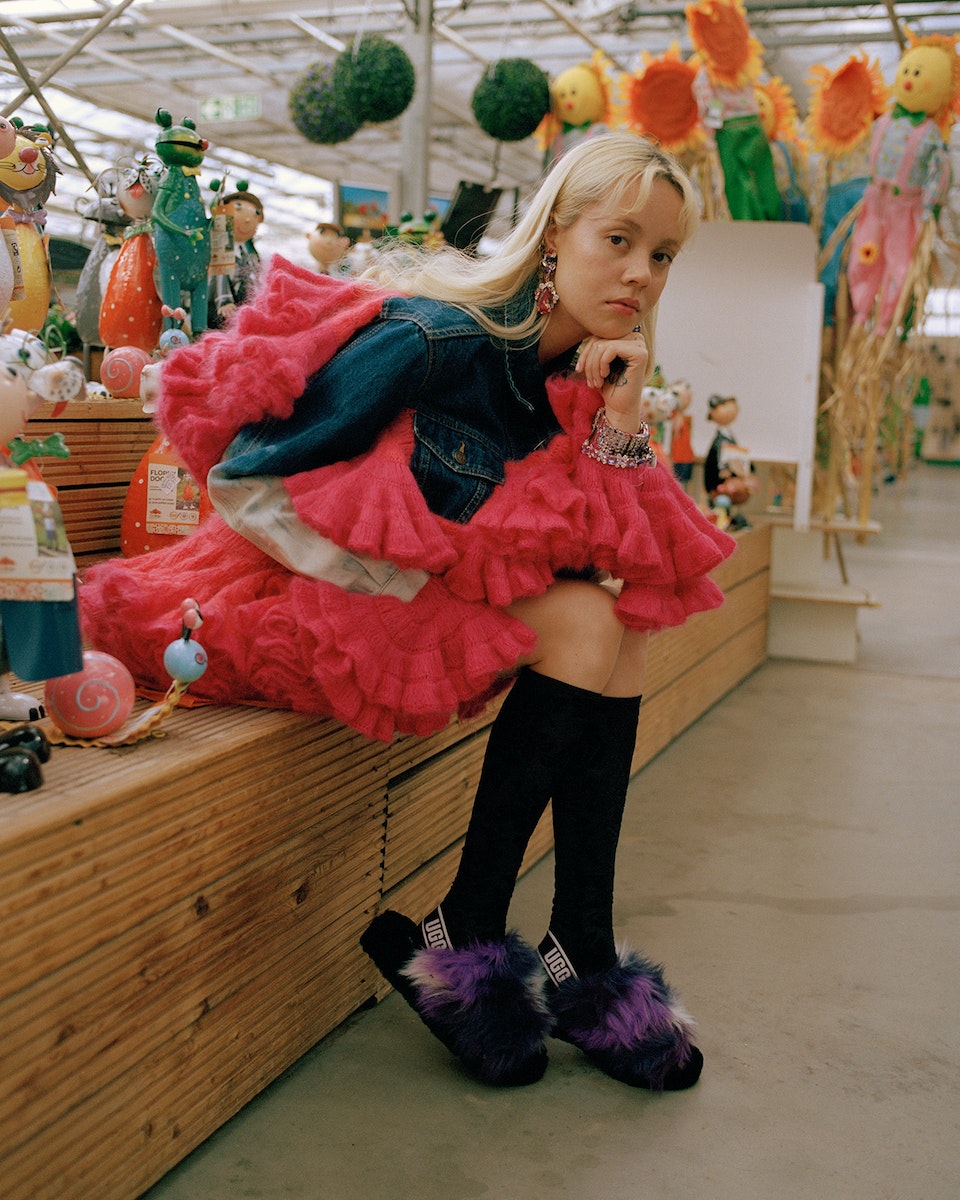 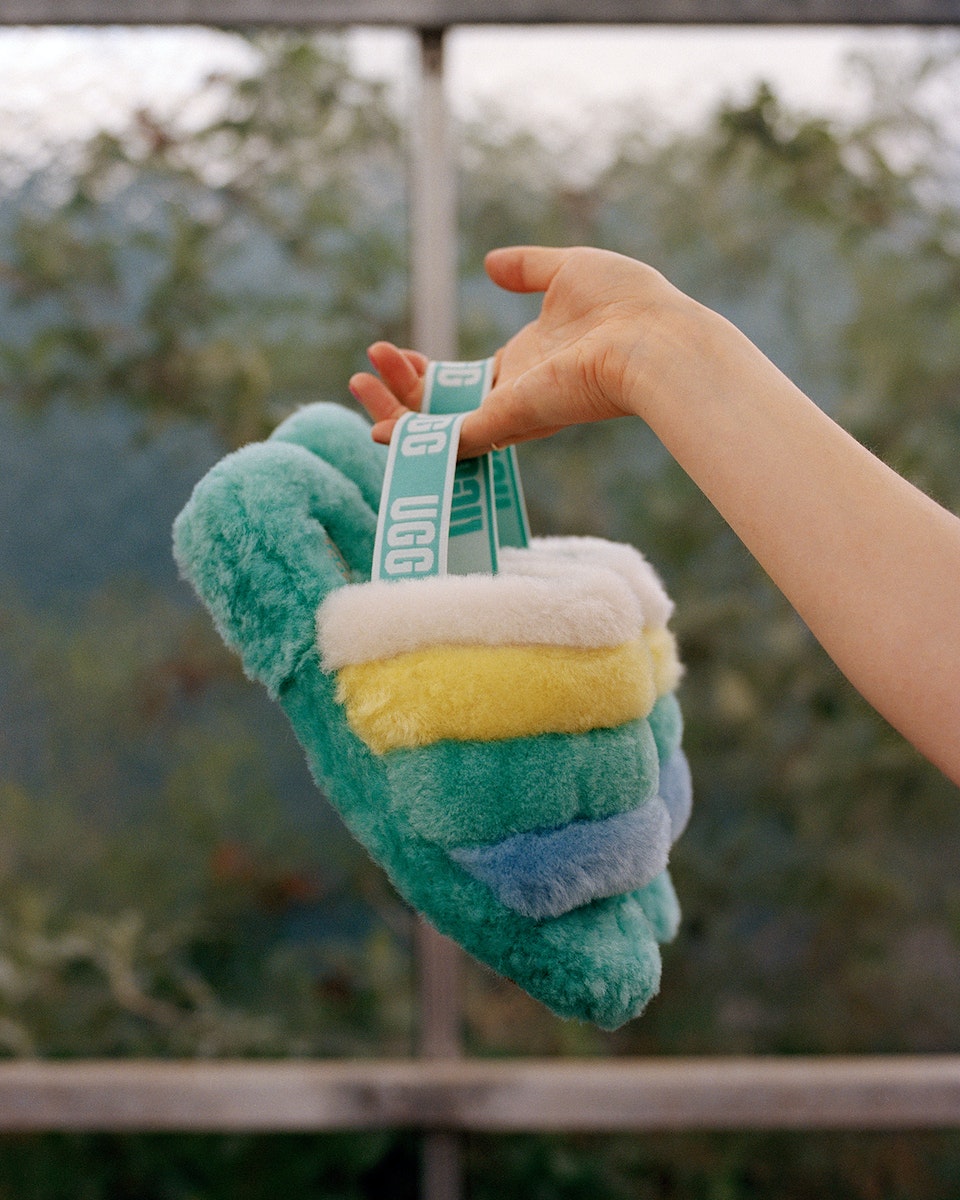 If you wake up and you’re having a bit of a ​“meh” day, how do you get yourself into a good headspace?

I’ve got a little studio in my garden that my Dad built. I usually go in there and I put music on really loud, dance around and pretend that I’m at a party. Or I go on a drive. I think listening to music is the main thing.

What’s on your playlist right now?

It’ll either be Drake or Rihanna or Easy Life. I’m really bad at keeping up with new music. So it’s usually old stuff that I listened to when I was a kid. 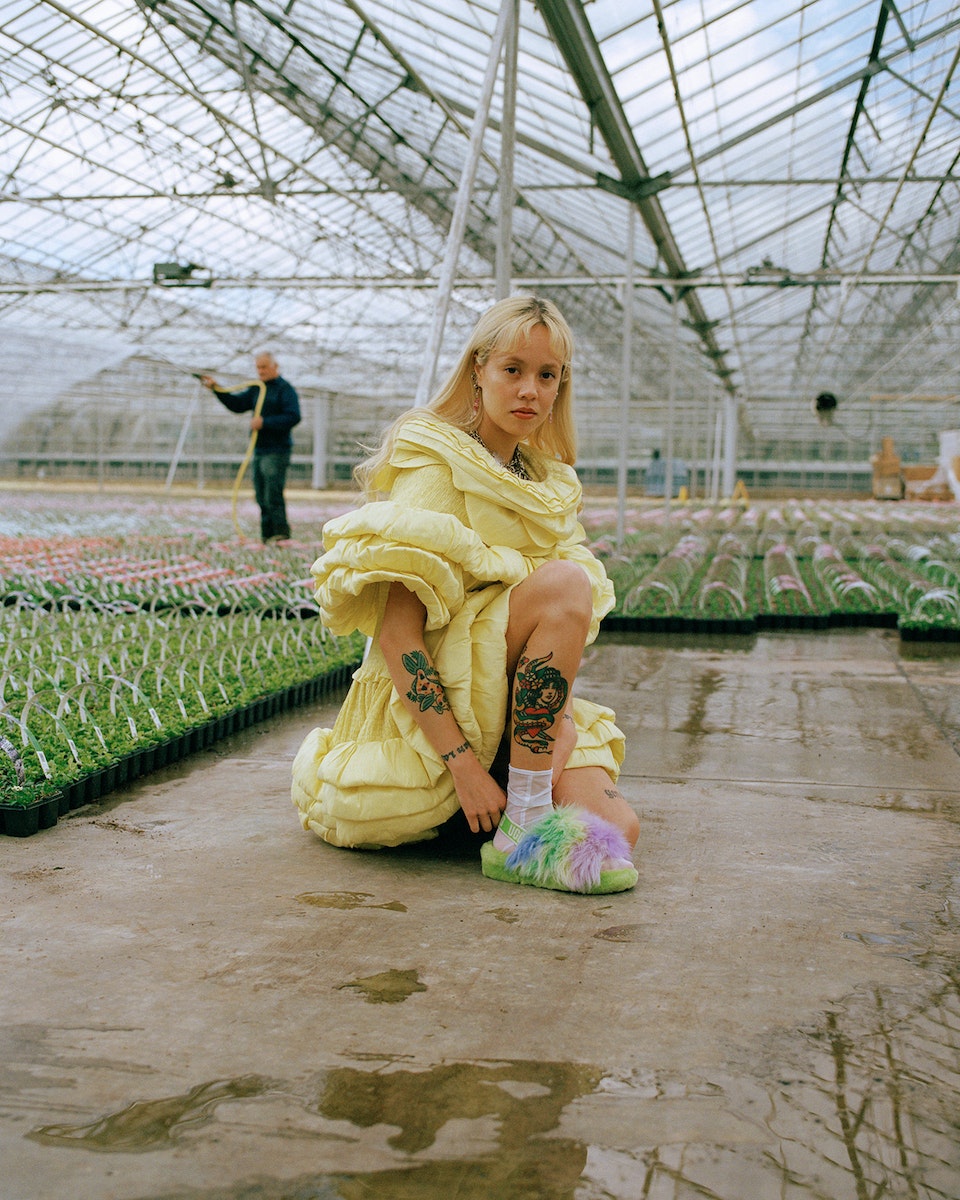 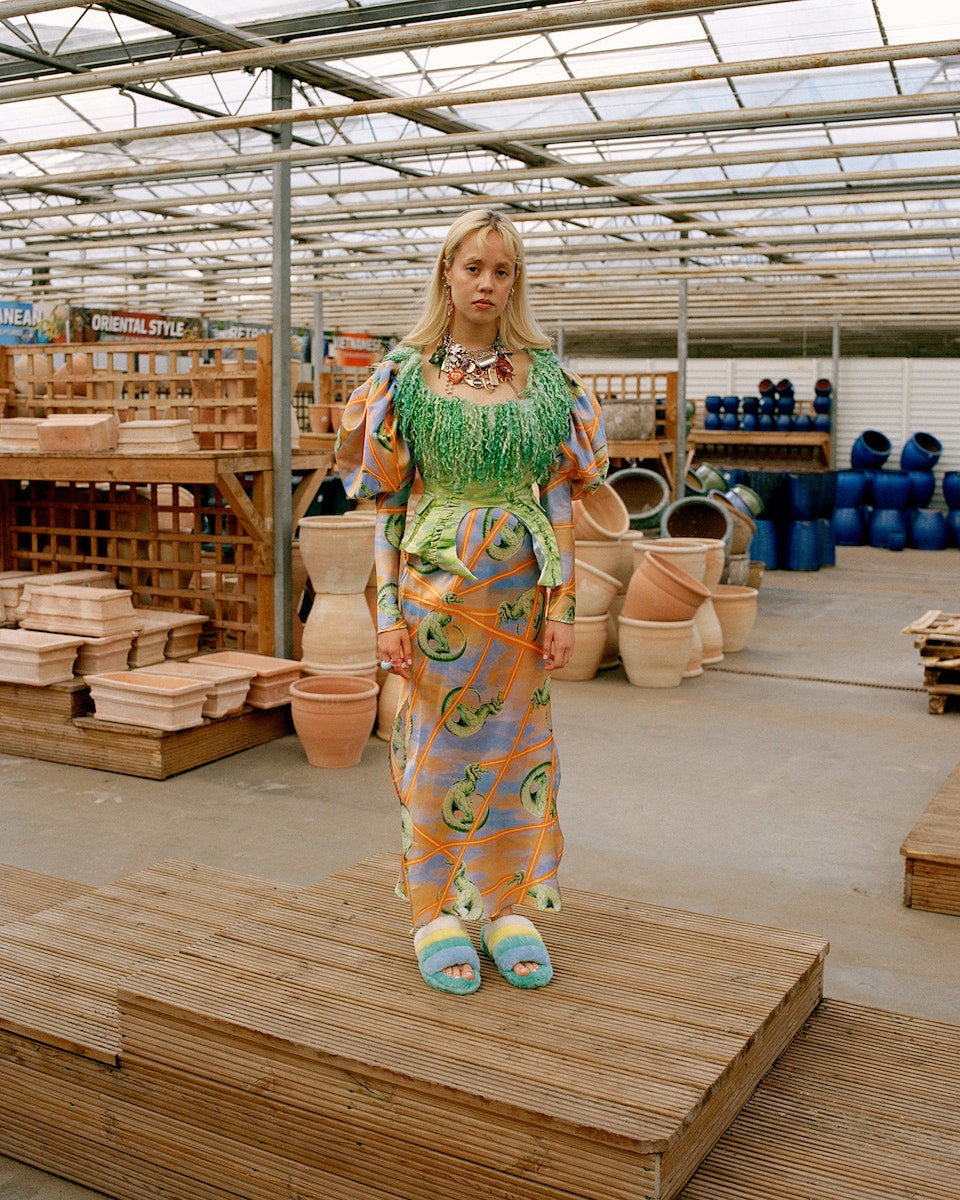 Your style is super eclectic. Where do you find your references?

I think it’s about the way it shapes on my body and if it makes me feel comfortable. I think for me, it’s always comfort over trends or whatever. I don’t think that trends really fit on my body right. I’m obsessed with little dolls and the way they wear short skirts and their long legs and big shoes… I like big, puffy shoulders and things that shape my waist… Clothes that make me feel very confident about myself.

What do you think of the new UGG style?