Wunmi Mosaku is a force to be reckoned with, not least when she’s dressed head-to-toe in heavy armour and laying down the law as Hunter B‑15 in new Marvel’s latest blockbuster TV series, Loki.

Created by Michael Waldron (Rick and Morty) and directed by young British director Kate Herron, who cut her teeth on Sex Education, the fast, tricksy and often funny Loki takes place in an alternative timeline post- the events of Avengers: Endgame (2019).

Mosaku, the 34-year-old British-Nigerian last seen to devastating effect in Netflix’s migrant crisis horror film His House, brings a fresh character to our screens. Hunter B‑15 is a badass high-ranking officer from the TVA, a bureaucratic organisation that exists outside of time and space, monitors the timeline and hunts down ​“variants” who risk upsetting the natural chronological order of things.

Keeping up so far?

The series begins with Hunter-B15 on a mission to bring in Loki after he crash-lands out of time into Mongolia’s Gobi Desert. The God of Mischief’s hardwired arrogance sees him battling the by-the-book TVA, hopping from one timezone to another and tussling with Agent Mobius. He sees Loki as a valuable asset in the series’ other narrative thread: tracking down the variant responsible for stealing the tesseract during Avengers: Endgame, and wiping out the other variants wreaking havoc on the main timeline.

Dialling in from the United States, where she’s just wrapped up a new film, Call Jane, Mosaku opens up about time travel in the MCU, her slow-motion fight scene with Hiddleston and, importantly, accidentally punching her best friend at drama school.

You’re new to Marvel’s superhero world. What did you think of the Loki script when you first read it?

It was my first foray into the MCU universe and it feels really great and exciting. I’m so grateful that Hunter B‑15 is a completely original character. No one has any expectations of who she should be, who should play her and what she should look like. I really liked that because it took the pressure off and it was more fun to play around with it. It’s super fun to start from scratch.

Was the audition process very drawn-out?

There were a lot of NDAs and it was very secretive. I had no idea what I was auditioning for, so I filmed my auditions in both an English and American accent because I had no idea what they wanted. I got a call at Christmas when I was at home in the UK at my mum’s house in the middle of the night saying I had an offer on the table for Loki. I was like, ​“when did I audition for Loki?” So that was cool. I had only watched [the Marvel films] from Black Panther and became a fan of the MCU because of that. My director, Kate Herron, called me and explained the whole of the MCU Universe from Captain America to the season finale of Loki. It took over a couple of hours but I had already said yes in my heart – she sold me on it. But I already knew I wanted to be part of the MCU after watching Black Panther.

Hunter B‑15 is a badass. Is this something you brought to the character?

This depends on who you ask! [laughs] Some may say I’m very similar to her and others won’t see any similarities at all. I’m sure my husband and family will say, yes, that’s Wunmi! I love the fact that she doesn’t code-switch and doesn’t pull any punches. She’s completely, authentically herself all the time. But I’m very good at code-switching and I don’t like that side of myself. I wish I could be 100 per cent myself all the time. I’m just not brave enough, so I really enjoyed playing that role: a no-nonsense woman who knows who she is and what she believes in. Someone who doesn’t have to switch up anything in order for people to like her. I wish I was more like that. Although I think I am getting there.

What do you think women and girls will think when they see Hunter B‑15?

That’s interesting, I’ve not thought of that. If I go back to myself, if I was a little girl, I never thought I would be in the MCU, in that universe or any kind of superhero universe. I love how strong she is physically. I love that I get to explore my own personal strength within this character and I hope that little Black and brown girls look at her and say: ​”Wow, I can be part of this. I’m strong, I can do all of this and be authentically myself and not have to code-switch.” I would love that. 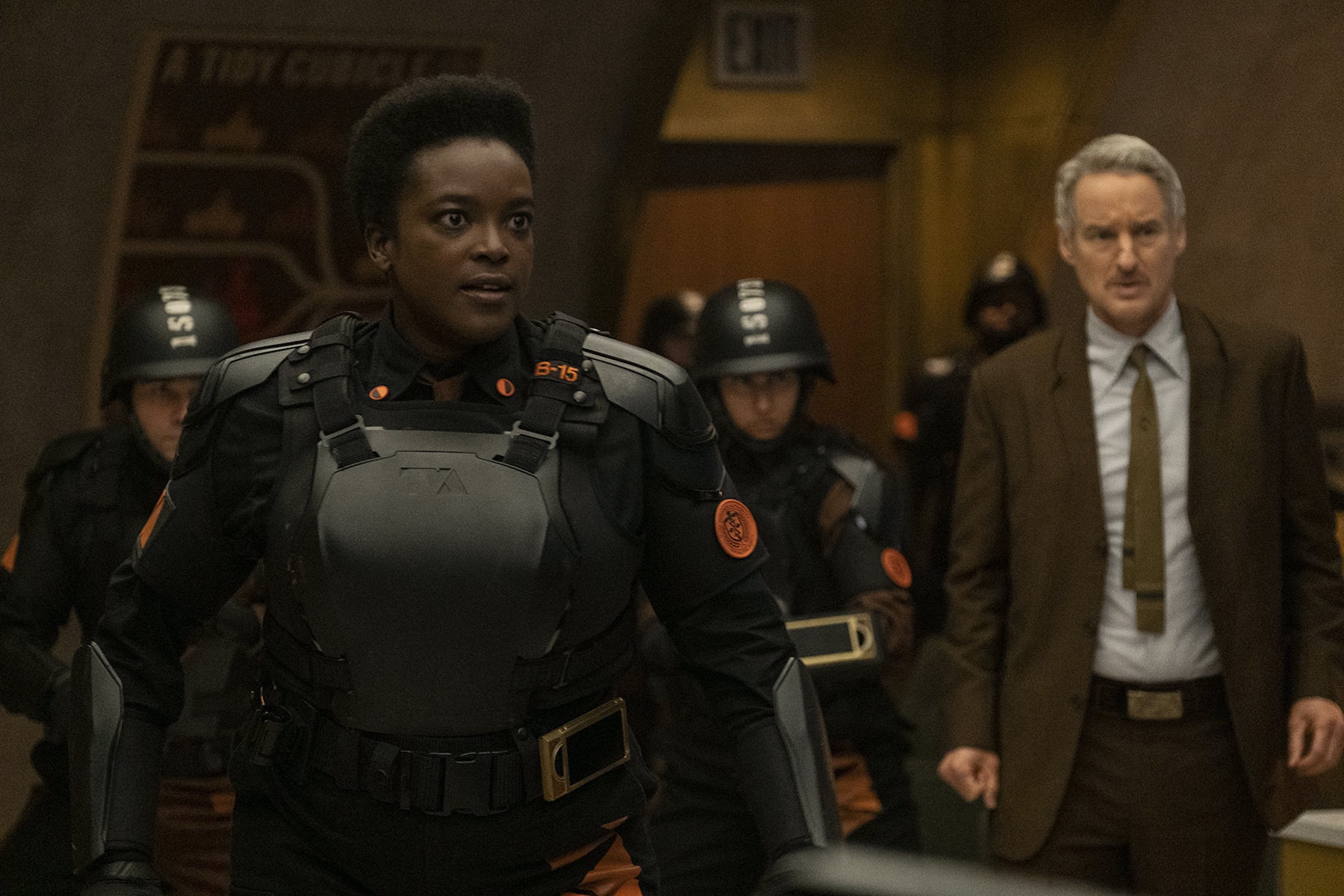 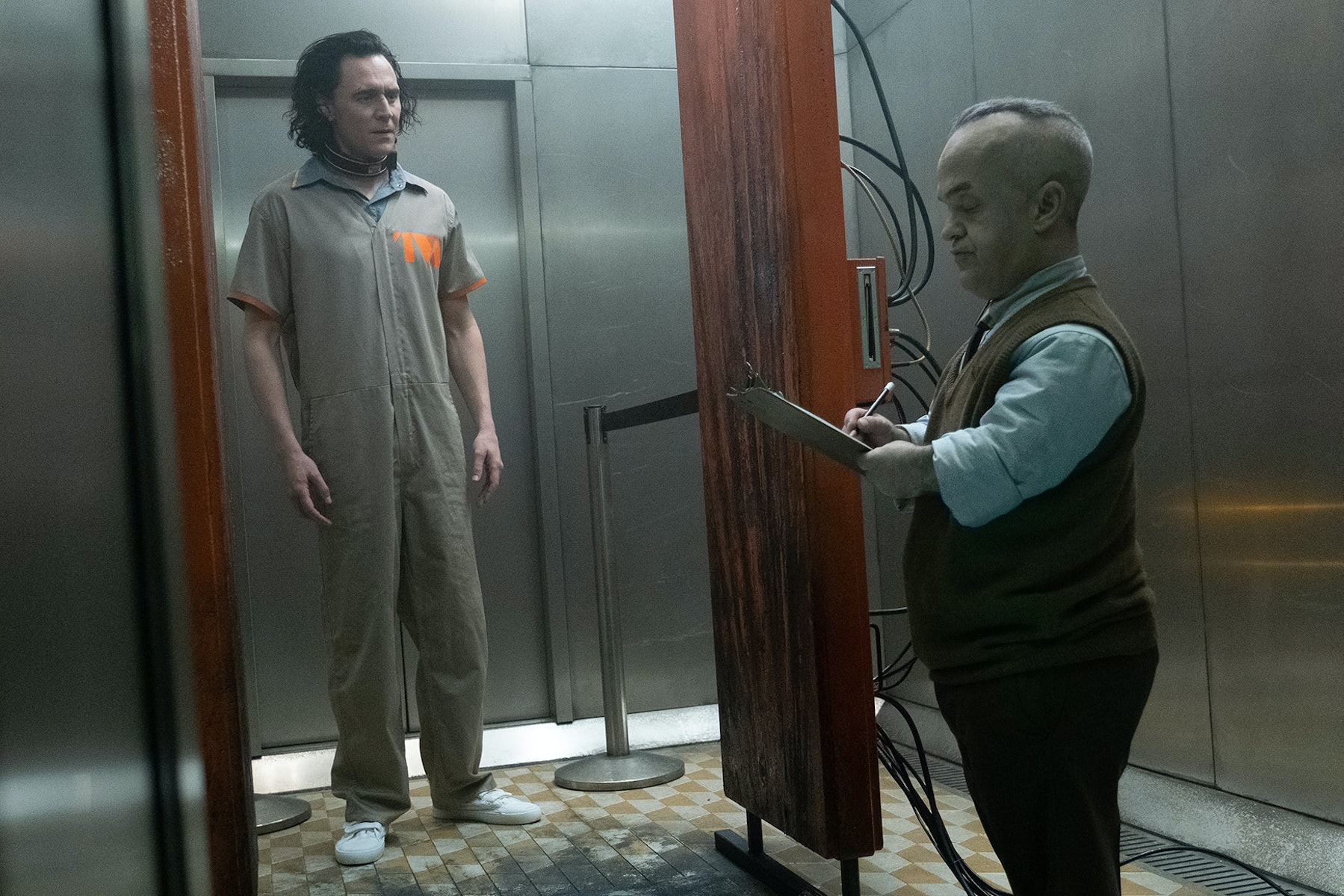 You have some full-on fight scenes. How hard were they to film wearing all your heavy armour? And did you have to undergo an intense fitness regime?

We did stunt training every day. I didn’t actually get to practice the scenes in my costume until quite late on, which was a mistake, I think. That costume was pretty heavy and sweaty, but I didn’t have to follow a crazy regime. When you hear about the Black Panther cast throwing up in training, it wasn’t like that for me. I just enjoyed a few nice few hours every morning doing the TVA drill, how we work together and stunt training, which included how to punch, how to kick and how to look like you’re running really fast without burning out. We also went through the choreography of the fights and practiced those every day. So it didn’t feel crazy. I really enjoyed it.

What was it like fighting Tom Hiddleston? I mean, you kicked Loki’s arse!

Yeah, it felt good! [laughs] Tom is very strong. My character is also very strong so there was a lot of acting on both our parts because Tom is a lot stronger than I am. I was like: ​“You need to calm down because I can’t hold you like this!” But also, he’s really used to this and has been part of this world for over a decade and has fought so many people. He was never afraid and always encouraged me to go for it. I was a little shaky, though, because I actually once punched someone by mistake in drama school, my best friend Adam. I still – to this day – feel so guilty about it. When you do something like that, you lose a little bit of trust and everyone’s watching and waiting for you to do it again. So you don’t really want to mess up again. So thankfully, I didn’t punch Tom and I didn’t hit anyone!

When filming halted in March 2020 due to Covid, how did you fill the six months before filming resumed in September?

I spent a lot of that time gardening, cycling, sewing, cooking and literally pottering around the house rearranging everything! Also, I was homesick so I was making my favourite things from home like Egusi soup and crumpets. I learnt how to make them because you can’t get them in the United States. I asked my mum to send them to me and she said they would be mouldy by the time they got to me. I did receive a lot of care packages from my sisters and housemate in London.

It’s been incredible watching your growth in the UK, your career and making a name for yourself in America. In Lovecraft Country your character was super powerful and tackled some really challenging themes. How did that role differ from Loki?

Lovecraft was so different from anything I’ve ever done and I was so grateful for it because I do feel like I sometimes play a lot of police officers. I was grateful to play someone who was a singer, young and had a love story. And then to go to Loki, this military-esque character and getting to explore my physical strength, it was so different. I haven’t played characters like either of them before so I was pumped to do something different. 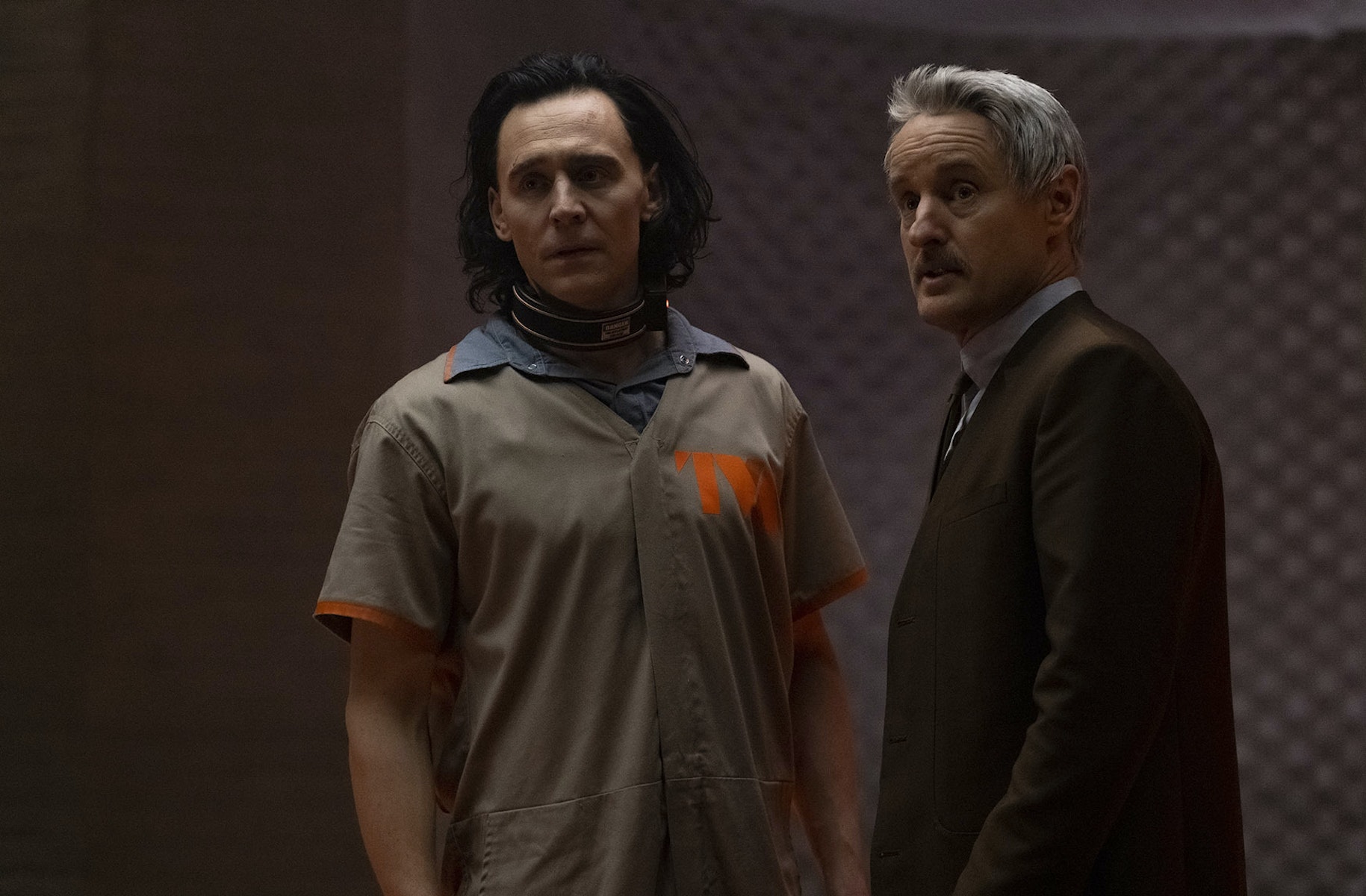 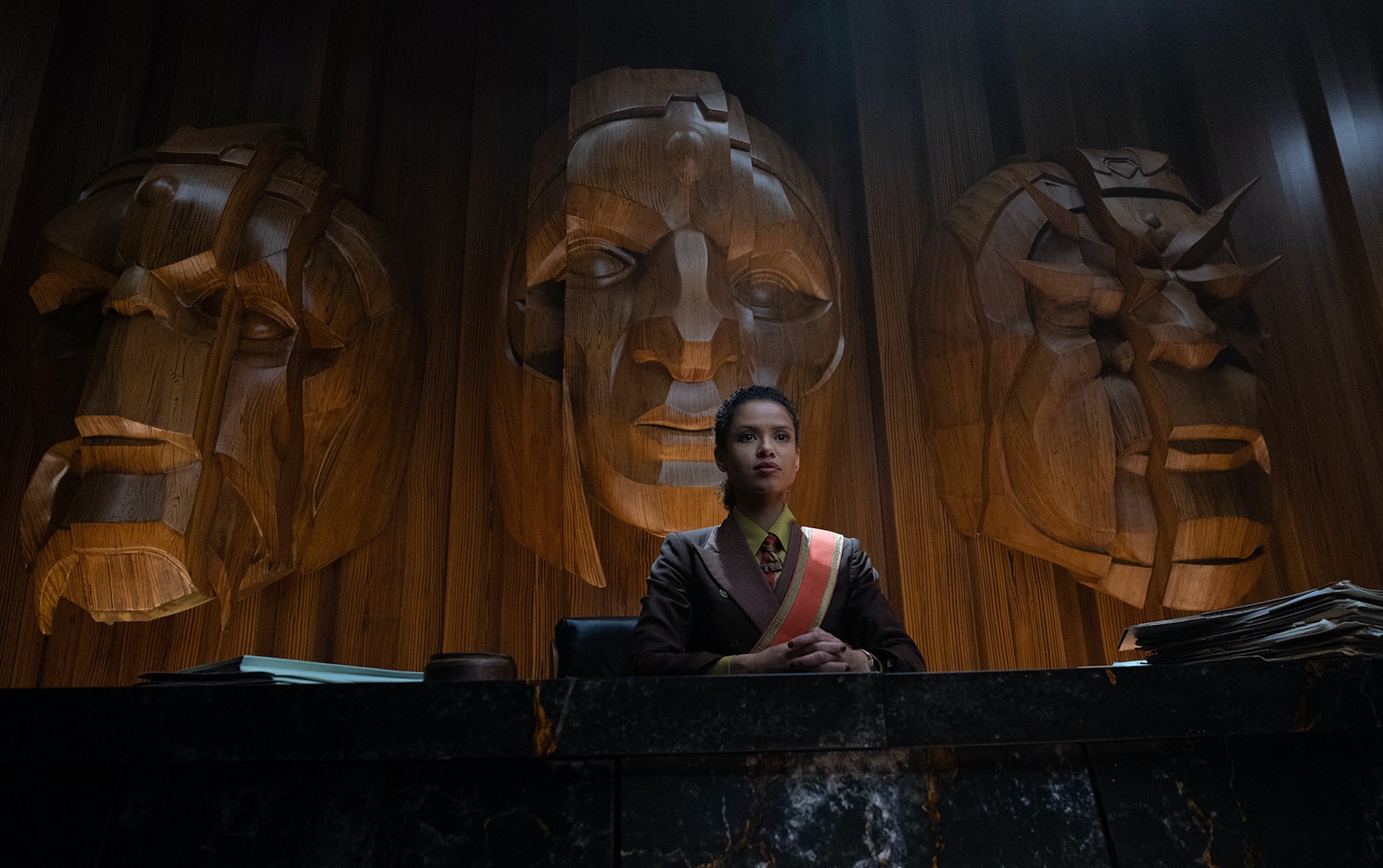 There’s a lot of time travel in Loki. Where would you travel to and why?

I would love to see my parents as children. The youngest I’ve seen my mother is when she was 16. I haven’t seen what my dad looks like as a baby or a child, or my grandparents. I’ve only got a few photographs of my grandparents, but only old. I would love to know what life was like, and looked like, back then, before my parents became parents and before they met each other. I hardly have any photos of my family. My grandma was born and raised in Ghana and my dad was born in Nigeria. My dad always speaks about names that have been forgotten about. That’s something that happens culturally. Names fall away because they’re not popular and if no one can remember them, that’s it. They fall off. I wish I could go back to Nigeria at that time and see what life was like.

Have you ever suffered from imposter syndrome?

Someone said something really interesting about this online. They said imposter syndrome is a product of the patriarchy and white supremacy. That was really eye-opening to me because I thought everyone experienced this feeling, but I realised that we don’t. I don’t know if I feel imposter syndrome, but I know I feel very grateful not only as an actor but as a woman of colour being faced with European-centric ideas of beauty. I know I have worked really hard and have sacrificed a lot. I don’t always like the idea of feeling lucky, but it’s true. This could absolutely not have happened for me [without some luck].

What’s next for you?

I’m not one of those actors where I’m booked all the way to the end of the year. It doesn’t work that way for me, I wish it did. I just finished a film called Call Jane which tells the story of the Jane Collective in Chicago, an organisation that provided safe and illegal abortions in the 1960s and ​’70s before Roe v Wade. I’m really excited about it because things are not looking great for women’s reproductive rights in the US right now. While we were filming, it was very emotional. It feels really close – this overturn [by the US Supreme Court, which has agreed to take up Mississippi’s bid to enforce a ban on almost all abortions after the 15th week of pregnancy] can happen tomorrow, and you still can’t get an abortion in some places. Women have to travel far and wide, especially if you’re underage – it’s extraordinary. I’m really excited about this project and I hope that it leads to changing something.

Finally: you’ve worked with both DC (in Batman v Superman: Dawn of Justice) and Marvel. Out of all the characters in those superhero worlds, who would Hunter B‑15 beat in a fight and who would she definitely lose to?