In the tightly-crammed Brooklyn apartment of Nikki Igol and Nelson Harst – researchers and archivists who deal in countercultural imagery, rare literature and oddball ephemera – there is a toilet roll on display beneath a television, near-naked without its hygienic tissue sheathing. Drawn in felt marker on the roll’s exterior is a Jonathan Putz illustration of Miss Piggy, sporting outsized breasts and open legs, her hands exposing the crude outlines of a belly button, or – possibly – a clit.

This undressing of an iconic (if already saucy) children’s character feels typical of the couple’s idiosyncratic tastes. Igol, a fashion image archivist who developed one of the earliest digital catalogs of editorial imagery with VFILES, is the head of archives for a leading figure in the beauty industry. Harst, a sometimes-rare bookseller (who began, officially, selling textbooks with friends, then with a pop-up on Howard Street and later an Instagram store, dealing under the name @antifurniture), catalogues and maintains the vast literature inventory of a prominent contemporary artist (among that artist’s collection are many early inscribed copies of Jack Kerouac’s On The Road).

Their shared domestic space is a buzzing, squishy, blow-up, stacked-high monument to everything that is subversive and sticky and gloriously experimental in America and beyond: long-shuttered New York nightclubs where anything went, the unwieldy, Wild West of early desktop self-publishing, kink, bondage and sexual powerplay, camp aesthetics in fashion, and free postcards from the ​’90s that advertised websites. (“They’re all like, surf over to www​.ama​zon​.com,” says Harst, laughing. ​“They show this now-inverted relationship between the physical and the digital.”)

Their home doubles as a living library, much of it lined with large white shelving units, and each spilling with precious, oft-lewd printed matter that dips in and out of new visual rabbit holes. (The rest remains in a giant storage unit.)

There is a lot to see. Here, on the floor of their neon-pink lit hallway, is a sculpture of a fried egg. There, spanning several shelves, are Harst’s volumes on early computers and the burgeoning internet: 24 Hours in Cyberspace, Designing Online Identities, Apple T‑Shirts, Mars Observations; tens of thumbed-over editions of Macworld. Pulled down from some other place are stacks of now-rare, hyperstylized greeting cards from LA company Paper Moon Graphics, and a glossy book by Japanese airbrush illustrator Hajime Sorayama featuring half-robotic women in sexual positions, large-breasted and sometimes straddling silver machinery. Laid out on a table are old copies of magazines like architectural rag Nest and Details and Oui, as well as The Adventures of Sandee The Supermodel, or Yvesaac’s Model Diaries, a three-issue comic book opus released by designer Isaac Mizrahi in 1997.

Each new discovery leads to another: a little spike of informational dopamine. I ask if all the pair do on weekends is pour over their personal collection – but like the rest of us, I suppose, it turns out they’re often watching TV. 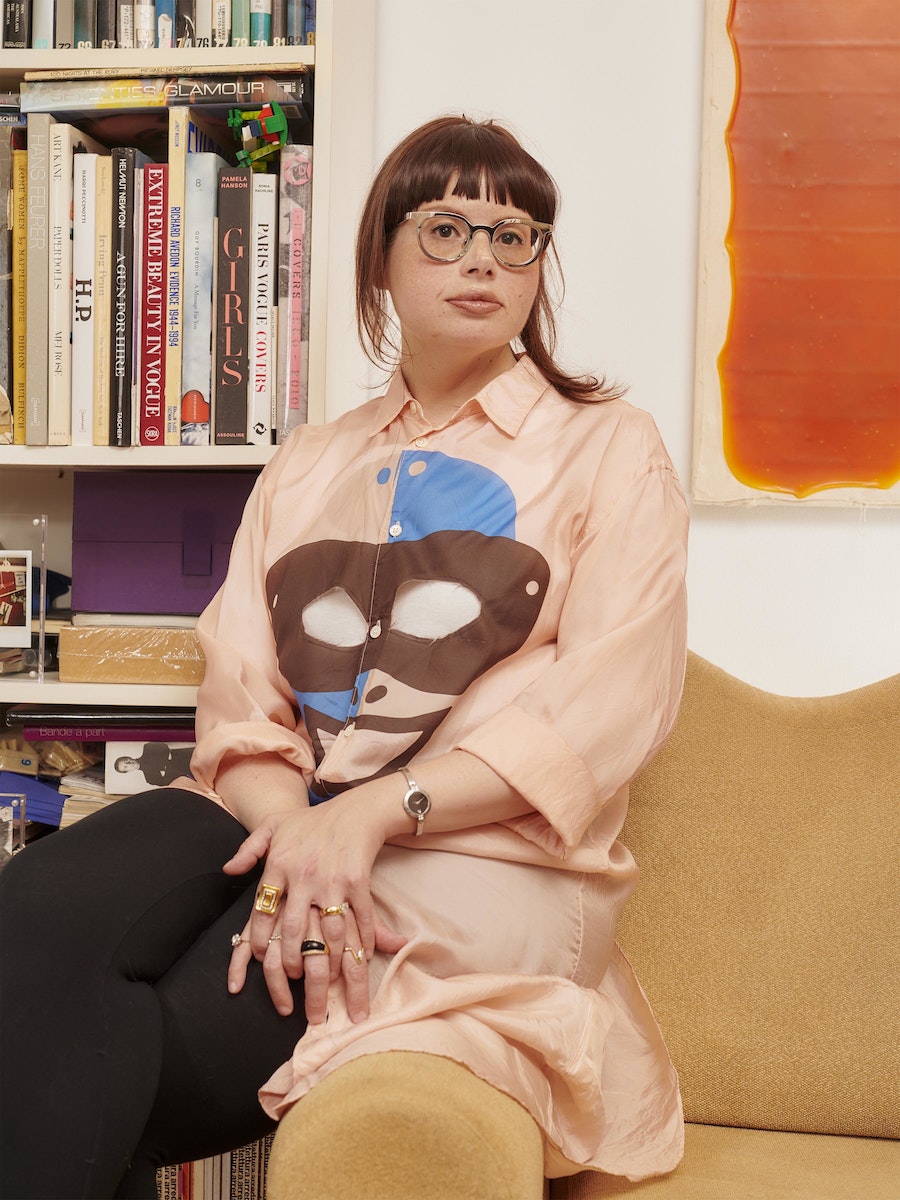 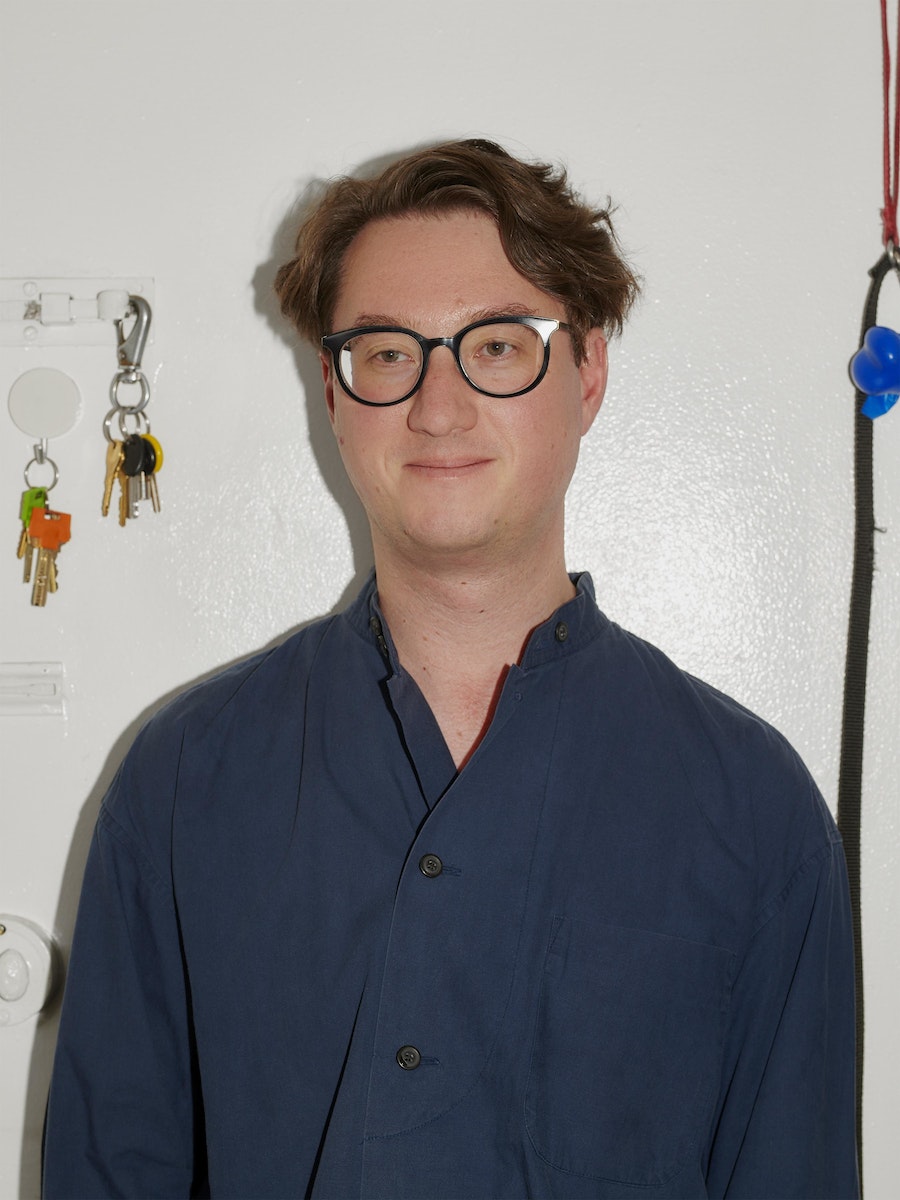 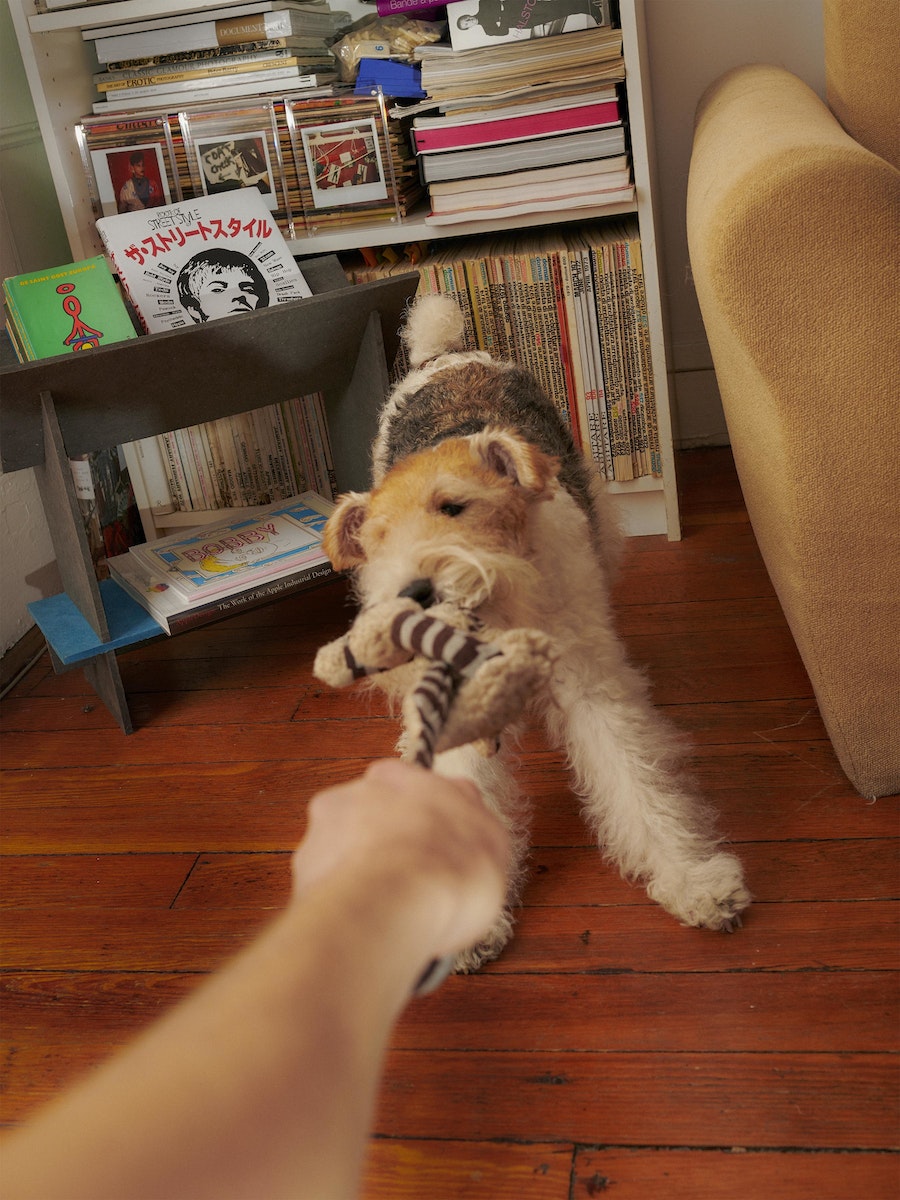 “We’ve been here together for seven years,” says Igol. She moved in alone 13 years ago. It was the first apartment a broker showed her when she moved to New York on a whim, having just graduated from art school, where she studied art history.

“I didn’t know what I wanted to do. I just made something up so my mom would send me to study in Chicago. And after, when I was figuring out what to do next, I had a friend in New York who said, ​‘Just move here. I’ll get you an internship with [fashion designer] Andre Walker.’”

She recognized the name immediately from Details magazine, a title she discovered at a garage sale at around 11 or 12 years old, just before her Bat Mitzvah. ​“I’d been obsessed with it. I came here for the weekend, and just moved. And I began working with Andre – it was a very good time for him. He was doing a lot for Marc Jacobs. I was his personal assistant, intern, anything. It was him, myself and Carlos Taylor. The three of us just got shit done.”

After a few years with Walker, Igol decided she needed to be in magazines. She turned up at the V offices unannounced, and landed an internship in the same afternoon. ​“That’s how it was back then,” she explains, leaning back on a two-tone couch. ​“You’d walk right in, and if you had the right look, the right attitude and had a good conversation, you’d just get it.”

Igol began in the wardrobe department, but later moved to archiving after realizing none of the images produced for V had ever been organized, and suggested it was probably a valuable idea. Since the late ​’90s, each issue had been stored on a floppy disc, with no real digital asset management system. Having archived the title, she moved onto more job-inventing, following Julie Anne Quay, V​’s then-managing editor, to VFILES, a new store, social media platform, and free-to-the-public online fashion archive.

The story is long, but the short of it is this: VFILES had a lofty vision – pre-Instagram – to create an educational and ever-expanding digital reference library of fashion subcultures, photographers, stylists and models. Many of the images digitized by Igol and her team had never been online before; a wealth originated in the exhaustive trove of Michael Gallagher, whose store, Gallagher’s Paper Collectibles near Union Square, was once the city’s go-to resource for iconic, forgotten fashion pictures.

“Steven Meisel, every fashion who’s who, would go into that bookstore to look through and get inspiration,” Igol says. ​“But the owner fell on hard times, closed his shop and moved it all to a house upstate. Julie Anne, smart as she is, offered him a lump sum to take it all. I remember this huge truck arriving at VFILES one day with the most incredible material. We’re talking ​’60s Harper’s Bazaars with Veruschka [von Lehndorff, the German model] on the cover, signed something like ​‘Michael, I’ll love you forever. Veruschka.’ And there’d be rat poop on top of it. It was wonderful and very sad. I had this man’s whole life work. These were the life source for so many Italian Vogue stories. These magazines touched the hands of everyone – Bruce Weber, Peter Lindbergh.” 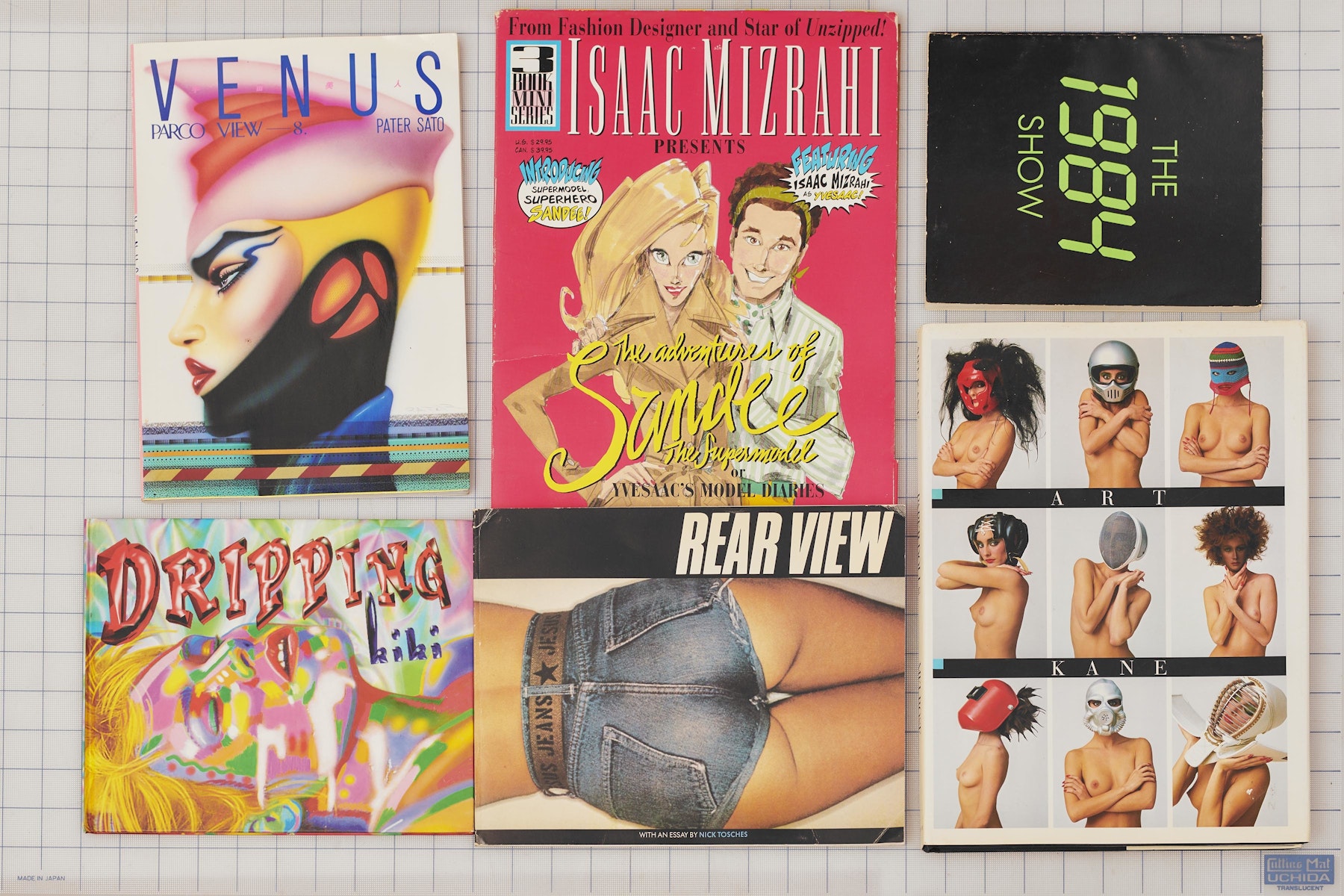 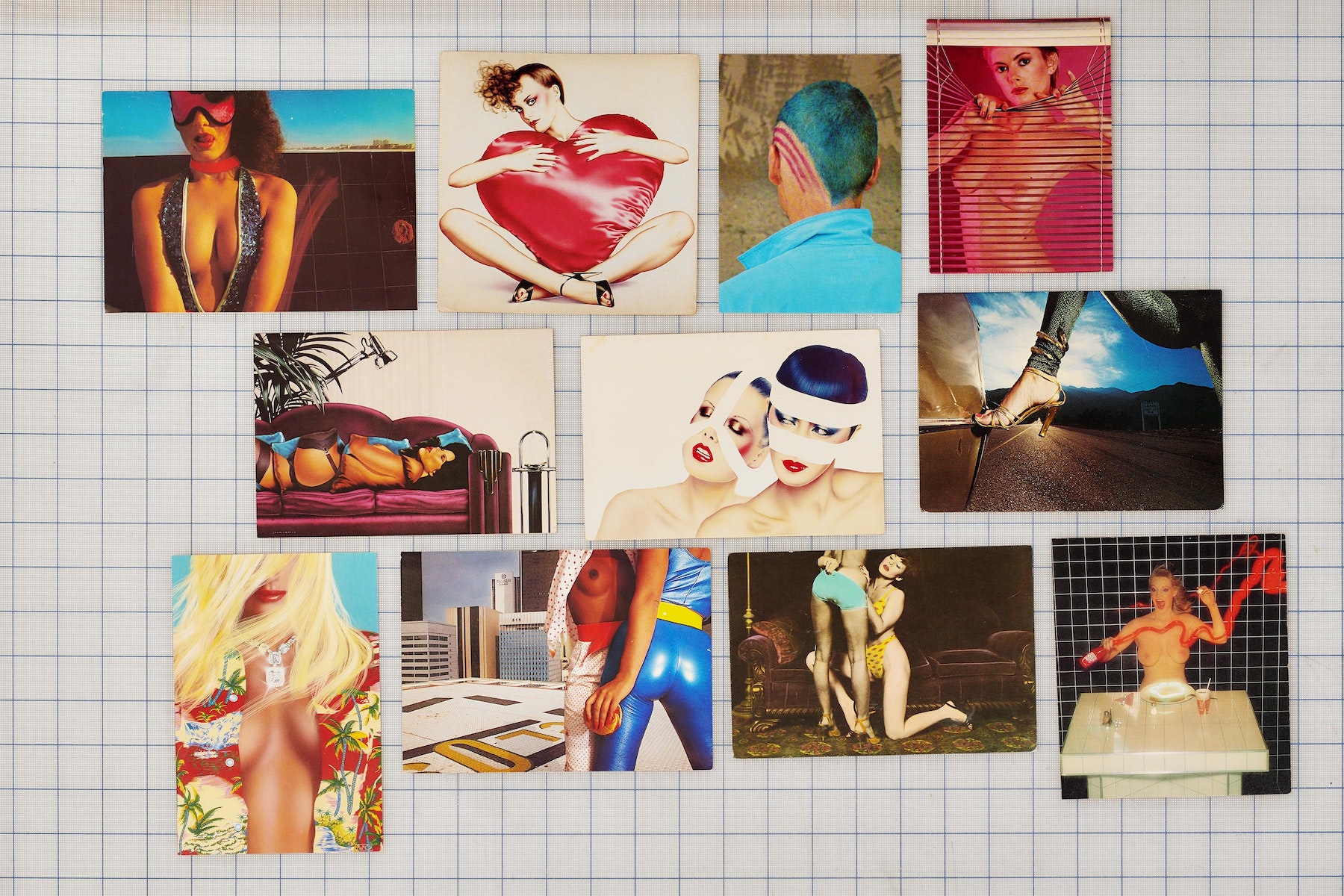 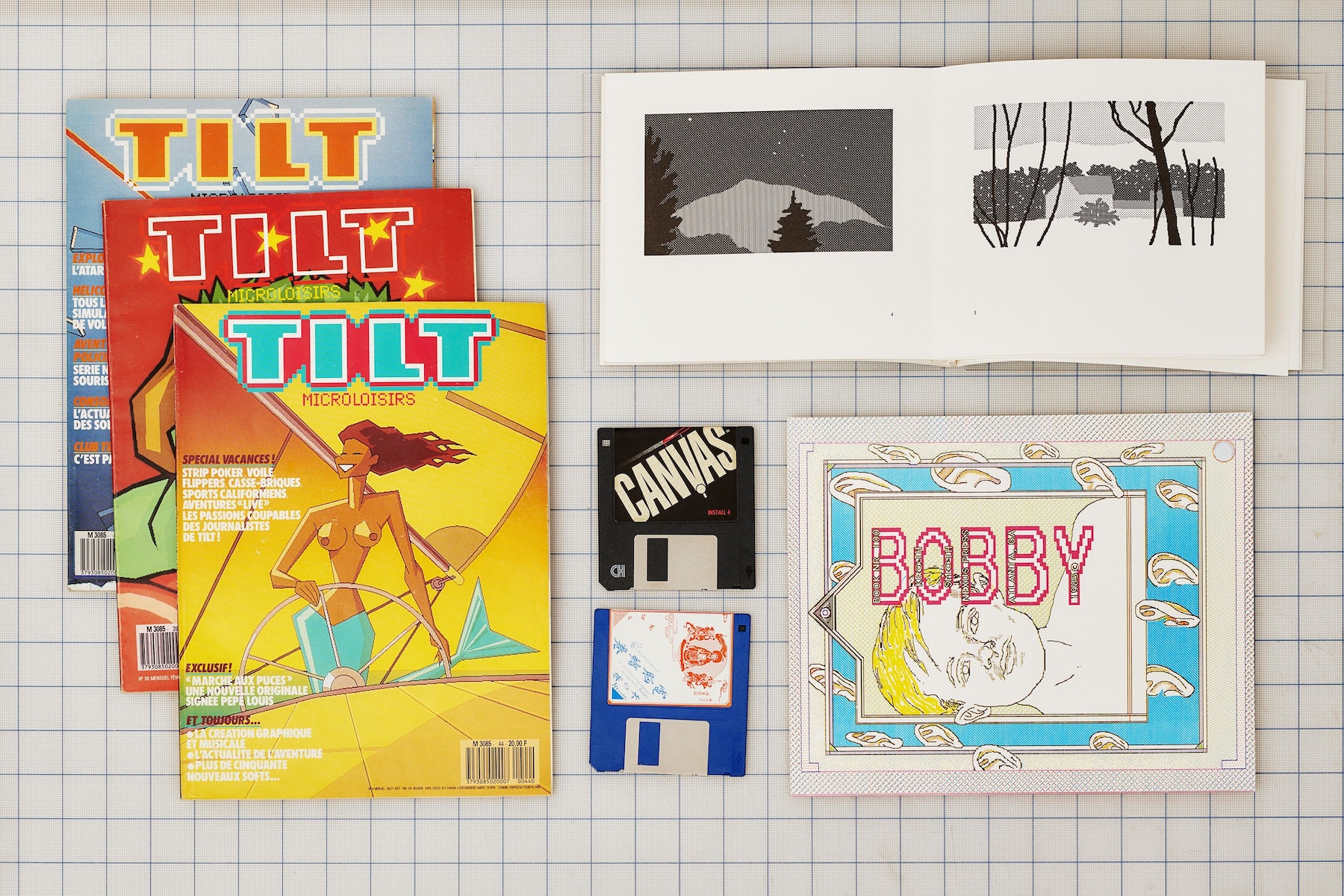 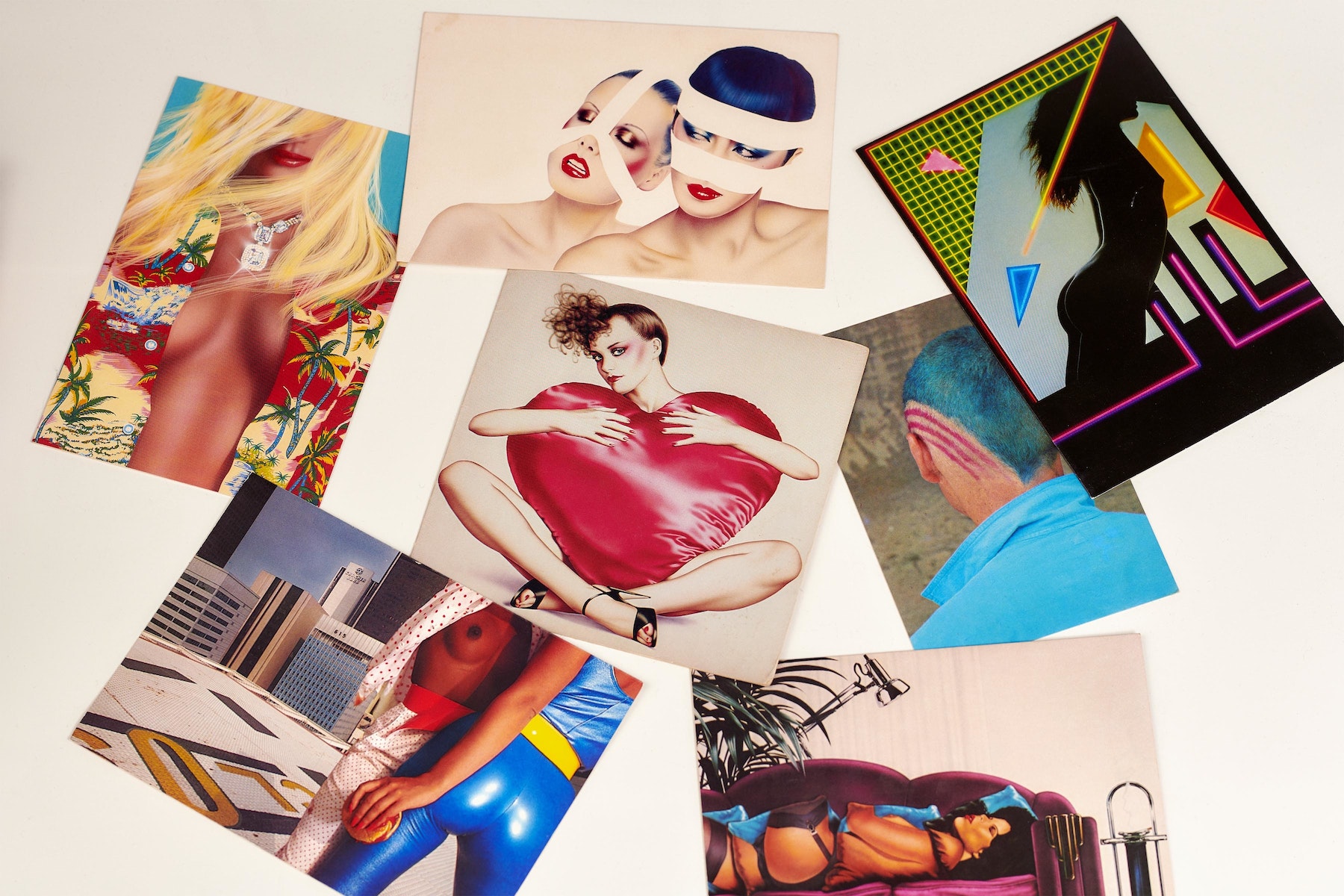 For years, until the project ended up being half-abandoned in favor of VFILES’ then-ballooning store, Igol and a small team (including her best friend, the designer Chelsea Fairless of @everyoutfitonsatc, and the model-turned-actor Hari Nef) would painstakingly scan and upload as ​‘VFILES’ pages of the world’s greatest glossies, perhaps the only people who had opened them in years.

Like Igol, Harst’s career beginnings had something of an outlawish, unwieldy quality to them: he is a person who seeks out new ways of navigating connections, between publishers, subjects, genres. While Igol trades mostly in iconic images from the ​’70s to ​’90s, regardless of perfection in physical ​‘quality,’ he is concerned with books as artefacts unto themselves.

Much of his life has been spent in bookstores, variously serving as a customer, staffer and founder of his own. As a kid, his free time was eaten up at the secondhand Half Price Books in Texas (“every book was half the price it was sold at when that particular edition released”), buying up science fiction paperbacks as though the world might soon run out of them.

“I soon realized that the cheaper a copy was, the more original it was too,” he says. ​“You’d see the same book, with the same cover, be priced at 60 cents, 75 cents, $1.25. And of course, the more expensive copies were the later printings of the book. I always wanted the cheap, original copy – I became obsessed with getting as much bang for my buck as possible. Pretty soon, I was buying way more books than I had any intention of reading. I loved the way certain covers looked, would realize they were all from the same publisher, or same groups of publishers, controlled by another. I’d discover eras when a particular publisher was cool.”

When Harst relocated to New York – after a long stint working at different bookstores in Seattle – he was shipping books cheaply across the world as an Amazon dealer with a couple of friends (“We would buy and sell easily 1,000 books a day”). But the content tended on the side of mass and generic – there were a lot of textbooks, he recalls – and Harst’s own taste is more obscure.

He was also enamoured by personal connections forged with buyers that didn’t quite translate (at all) on Amazon. That’s how he ended up propping up some fold-out tables on Howard Street (strategically around a smattering of studios and boutiques), piling them with obscure fashion and design books, and letting his own taste, Igol’s, and the people who turned up, determine his inventory – be it photographer Mario Sorrenti or current Revlon creative director Ruba Abu-Nimah.

“Ruba was one of my biggest customers. She bought a bunch of copies of Wet magazine and Screw. She – and everyone else – would tell me what they liked, and if I hadn’t heard of it, I’d go look it up. And that’s how I learned to be a book dealer. You go into the world, put some books out there, and you realise your best customers know more about them than you do. And so you just start learning again, going back and learning more.”

Harst’s employer, a major contemporary artist, has amassed a prodigious, institution-rivaling collection of counterculture American literature released between the years of 1949 and 1984: the period in which modernism began to fall apart, like wet cake. ​“What [this person] wants most from an acquisition is the copy that dreams, the copy that shouldn’t exist,” Harst says. ​“It’s about a really beautiful, first edition copy of a book – but it’s more about the person who owned it. [They like] to get a copy that was owned by someone interesting, preferably one personally inscribed to them by the author.”

For their own meandering, ad-hoc collections – which are often, they mention, underscored by the enormous creative black hole engendered by the AIDS crisis – Igol and Harst have their own dealers, people who understand the nuances of their respective tastes.

There is a guy, for instance, in Amsterdam, who alerts them to holograms of interest. It’s unsurprising, perhaps, that there are so many deliciously disparate threads – the two first met on a project called the ​‘Bidoun Library’ based on tentative thematic connections to the Middle East.

“It was a crazily curated selection of books,” says Harst. ​“For instance, the staff would go and buy every book they could find that included the word ​‘Arab’ in the title and cost less than a dollar. And that would be a shelf of books. We bought every book published in the Soviet Union in English about the Middle East, because there’s so many of them. And these corporate publications that came out of Saudi Arabia in the ​’70s and ​’80s.”

At one point, it needed to be cataloged and added to a database – that’s when Igol joined the project. Ever since then, she notes, they’ve found themselves moving through history together, ​“just showing different aesthetics. You know what I mean?” she looks at Harst. ​“Through images, words and objects.”