“Thing is, when we get our hair cut, we’re not just asking for a haircut,” says Andi Scarborough, in her soft Texan drawl, looking me right in the eye – via the salon mirror – and pressing gently on my forehead – or solar plexus – with a deep exhale. As Andi explains, more often than not, we change our hair to mark, or invite, some sort of transition. The end of a relationship. The start of a new job. A change in seasons. Or perhaps we just feel a bit rubbish and need a shake-up. ​“But whatever the reason, one thing is evident: there is waaaay more happening here than just a haircut,” she says.

I’m sitting on a faux fur rug in Andi’s private treatment room in the newly-consecrated Crystal Cave LA on Ocean Park Place in Santa Monica. Opened in July 2019, the Crystal Cave is essentially a cosmic co-working space for three of the most high-powered, business-savvy and Instagram-adapted energy healers in LA. Andi was already a highly successful hairstylist when she decided to enrol at the University of Santa Monica Spiritual Psychology programme. She took courses in breath-work, sound healing, Shamanism, Mystic Christianity and dream interpretation. ​“The more I learned the more I started to feel that if I just focused on a client’s hair, I was only doing half a job,” she continues, with a wry shrug. ​“Eventually I began thinking about how I could combine my two passions: styling hair, and spiritual healing.”

Andi’s treatments start at $111 for an express ​“intuitive drop-in, reiki, custom-blended masque and blowout” to $333 for the ​“full Crown Works beauty ceremony with ritualised haircut”, and she sees 2 – 3 customers a day three times a week, with a lengthy waitlist.

In the room next door to Andi is Julie Polier (@julieciviellopolier), equally in-demand for her unique shamanic facials, easing ​‘tension’ lines around the mouth by gently releasing acupressure points from within the mouth. The third member of the Crystal Cave collaborative is Colleen McCann (@style_rituals), a New York fashion-stylist turned energy healer and GOOP’s resident shaman. This standalone cottage is decked out in a winning blend of millennial-friendly rose gold and pastel-pink and shamanic insignia like dreamcatchers and shards of amethyst and rose quartz, with crystal-infused water on tap courtesy of Gemwater (gem​-water​.com), water bottles and carafes that promise to ​“transform the quality of everyday tap water with the vibrational energy of gems”.

Colleen, Julie and Andi are professionally (and annoyingly) coy about their celebrity clientele, and their new premises are purposefully under-the-radar. A discreet pink sign reading ​‘Crystal Cave’ in hand-painted lettering dangles on a wooden gate next to a painfully hip café, Love Coffee, where the scent of arabica and cardamom hangs in the air, and you suspect serving staff wouldn’t cope with a customer asking for actual cow milk – not almond, macadamia or oat – in their latte.

I’ll admit, in my Uber across town to this affluent beach suburb of Los Angeles, I was steeling myself for some Grade A hippy bullshit. I’d been sent Andi’s way by Colleen, who I met some years ago at a yoga retreat. Colleen is a bourbon-drinking, burger-chowing and reassuringly plain-speaking ex-New Yorker who swiftly eviscerated any of my preconceptions about what a ​‘shaman’ might look and sound like. But a healing haircut? With crystal combs? And a ceremony to say goodbye to my split ends? Really? As my Uber sat in traffic, I started regretting my decision to give this a whirl.

“All hair is dead anyway, right?” I silently ranted at myself in the back of Alonso’s Prius. ​“My hair doesn’t know or care if it’s being combed with a rose quartz or amethyst comb. It’s just HAIR. Dead, sun-frazzled, HAIR. And it’s going to be massively awkward with Colleen if this turns out to be a load of rubbish.”

And, to be fair, in Santa Monica, it pays to have your bullshit radar dialled up. There is plenty of cold, hard, earthly cash to be made from the celestial and mystical realm, and a lot of it is changing hands right here. On Second Street, a few hundred yards from the Santa Monica steps made famous by Sylvester Stallone in Rocky, every other business is a hot barre studio, a vertical climbing centre, an acai bowl and smoothie kitchen, or a meditation centre. Santa Monica has always been home to wellness warriors, while Venice Beach had the hippies, and now, with the arrival of tech giants like Google, Hulu and Headspace (earning Santa Monica the nickname ​‘Silicon Beach’) there is a whole new generation of overpaid over-workers hell-bent on ​‘self-optimisation’. In the Bulletproof Cafe, microdosed-up Google employees pay $7 for a buttery ketogenic coffee and other carb-free treats that claim to deliver a lean body and a sharp mind. At Moon Juice, yogis file in after a vinyasa flow class at Yogaworks across the road, to spend $12 on a juice ​‘boosted’ with ​‘brain dust’, ​‘sex dust’ or ​‘beauty dust’, an adaptogenic blend for whatever ails them that morning. It’s fair to say that Santa Monica, a self-obsessed neighbourhood in an already self-obsessed city, is an incubator for weird and wonderful lifestyle trends.

Last year, Americans spent $2.2 million on ​‘mystical services,’ which spans tarot readings, psychic services, shamanism, aura photography, astrological readings, spells and energy healing such as reiki. In March this year start-up founder Ross Clark launched Sanctuary, a new generation astrology app that offers on-demand consultations with living, breathing astrologers. ​“The venture world is definitely now paying attention to everything that’s happening in meditation and wellness and self-care,” says Clark. Canny entrepreneurs are waking up to the fact that millennial consumers are willing to invest time and money in anything that, in Clark’s words, ​“helps them understand both themselves and filter and work through all the chaos in the world.”

But Andi, a smart, smiley 30-something urban emigre from Texas’s Bible Belt, makes short work of any cynicism, partly because she’s so open about the lengthy personal journey she took to get behind my chair. ​“My mother, descended from a line of tent revivalists [Christian worshippers], broke a Def Leppard [LP] over her knee at one point and called it ​‘the Devil’s music,” she says. Eventually, she was able to dodge Sunday School and instead hang out at the local library, where she discovered Wiccan texts and Tao te Ching tracts that she hid under her bed. It’s only in the past couple of years that Andi’s family back home have ​“got” what she does. ​“It was a special moment to give my Lutheran German stepfather channelled books on Christ Consciousness, and geek out with my mom on my fave mystical power-babe – Mary Magdalene,” she says. ​“Best of all, though was being invited to do an Angel Card reading for my 90-year-old Nazarene grandmother. She cried at the messages that came through, and told me she was proud of me for having the courage to listen to my own heart.” I realise that Andi had a much more challenging spiritual journey to this pink treatment room in Santa Monica than I did. I just had to get in an Uber; Andi had to work through a stringent upbringing where she observed ​“crooked faith healers, blatant misogyny and homophobia and hypocrisy.”

Every crown chakra haircut with Andi takes between two and three hours and opens with a thorough consultation and spiritual once-over. She’s seen clients through bereavement, redundancy, divorce, chemotherapy – but just as often, she sees clients ​“at a place of transformational tension where they know there is something they want to let go of, but they just can’t put their finger on what it is.” When this happens, Andi brings out her magic toolkit: oracle cards, crystals’ and other ​“divination tools” like tuning forks, singing bowls and chimes. Andi has also made tools of her own: hand-carved crystal combs in amethyst, jade, galaxite and lapis lazuli, priced at $200, and her own blended scented oils, each medicining to a different chakra. 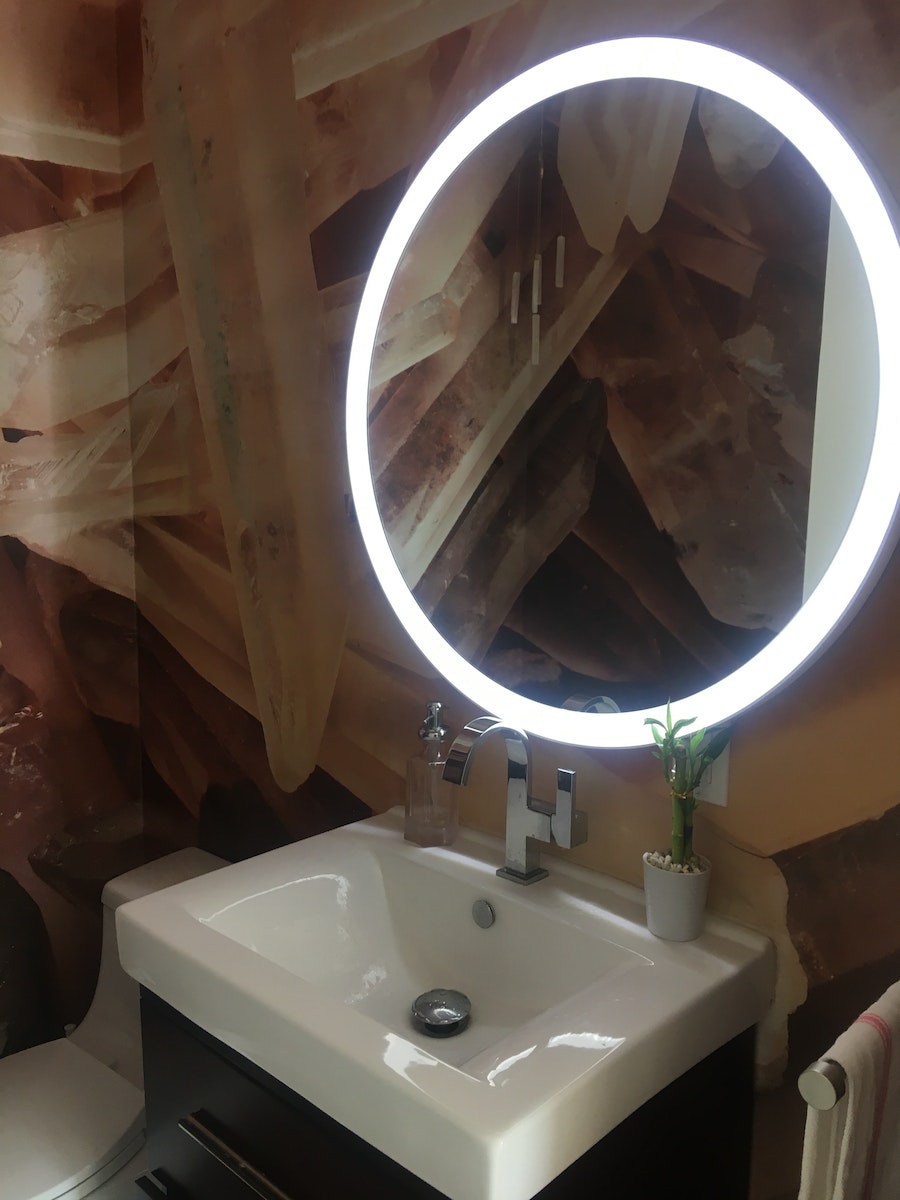 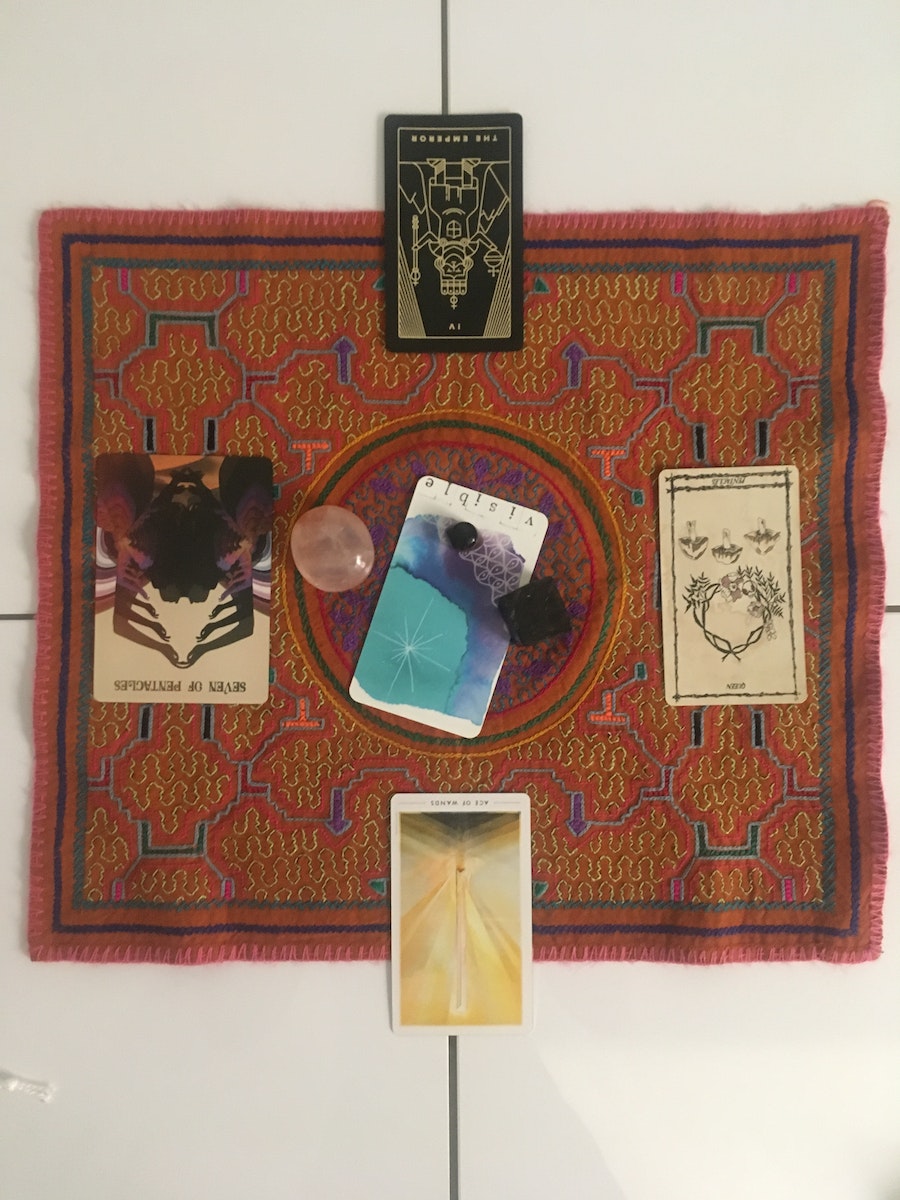 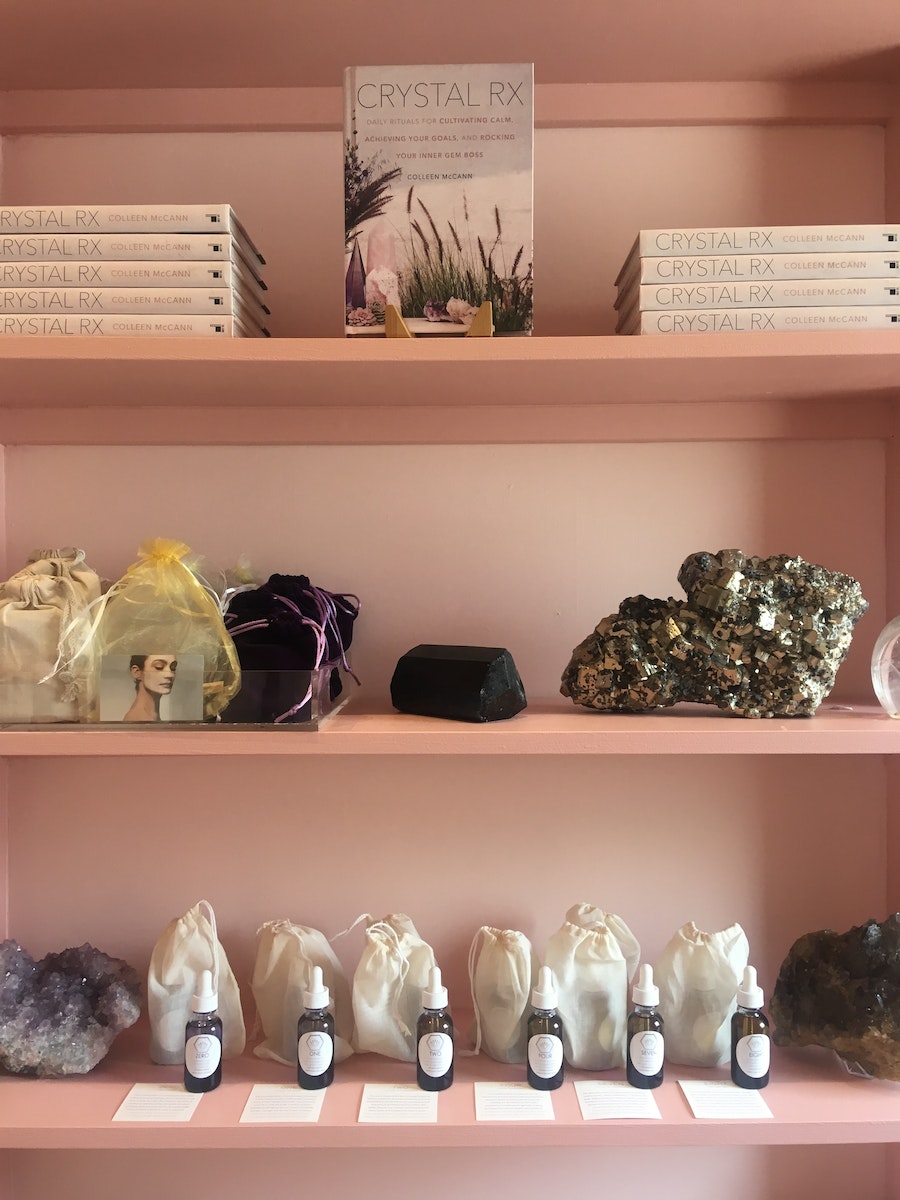 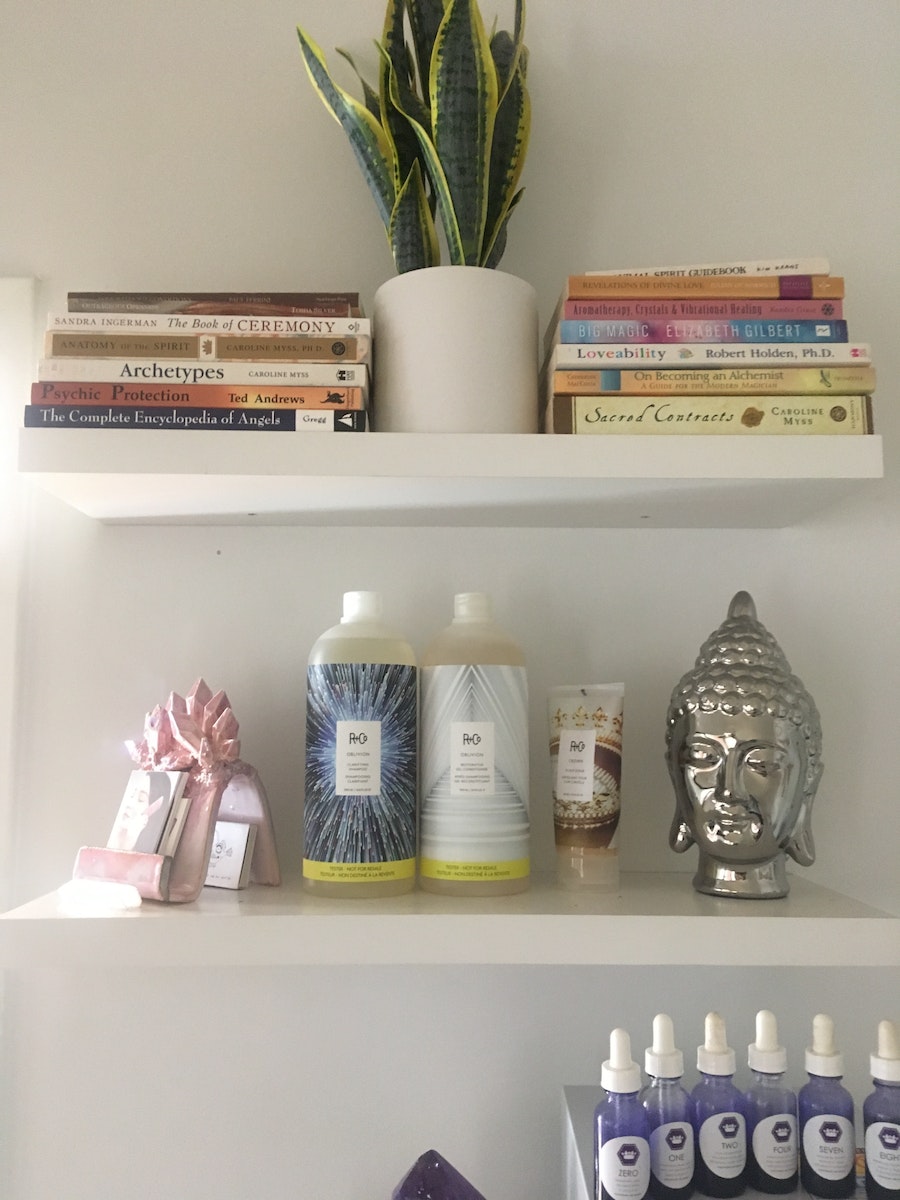 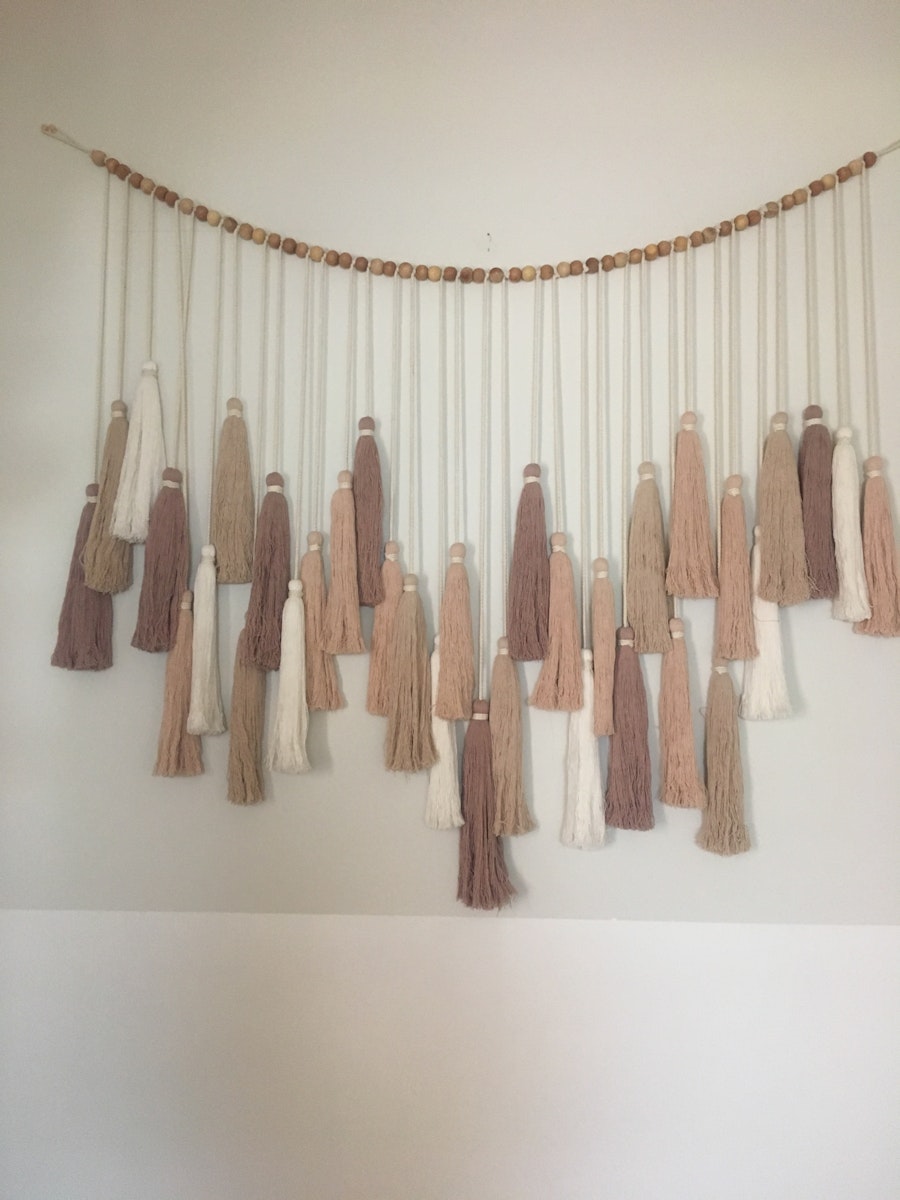 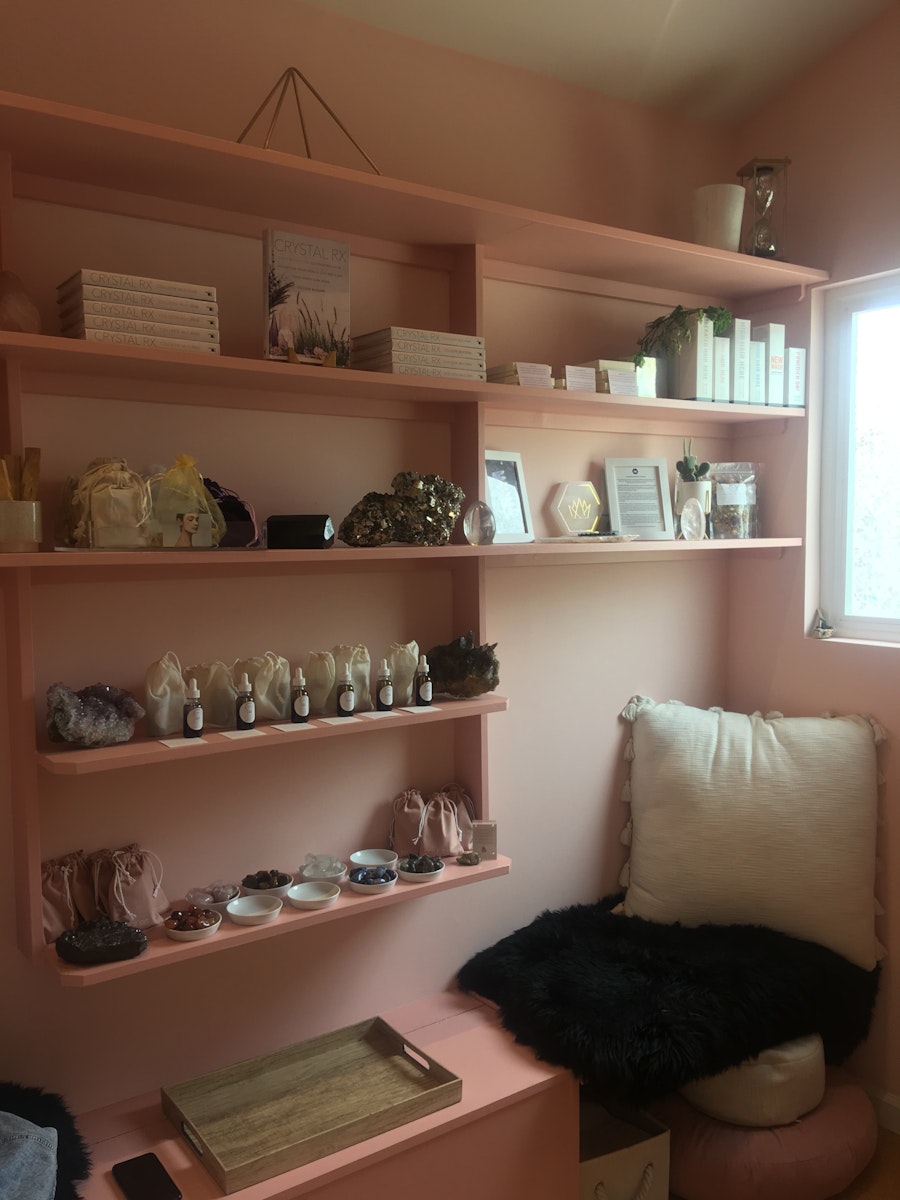 We pull tarot cards, and I select the crystal comb I want to ​“work with” today. As with all legit spiritual practitioners, these cosmic props primarily serve as cues for me to tell Andi stories about my life, admitting that my work life is thrilling but chaotic, that constant travelling can get lonely, that I’m still a little bruised from leaving a long relationship.

“To tell you the truth, I learn the most from my clients by their body language and how they wear their hair when they walk in the door,” says Andi. Her reading of me: cripplingly empathetic and sensitive, a little rootless, strong-willed and Sagittarian as fuck, is spookily spot-on. On the side table next to my reclining chair, Andi carefully lays out her handmade crystal combs, self-blended chakra clearing oils and tarot cards, alongside the more standard salon paraphernalia of scissors and bristle brushes. ​“Our hair is the one accessory we never take off, and just like a handbag, it speaks a lot about our lifestyle and the way we get (or don’t get) our needs met.”

Andi runs her fingers gently through my hair, regarding me in the mirror. ​“I love your hair,” she beams, which is nice, because in the past I’ve had hairdressers poke and prod at my hair like they’re looking for a lost wedding ring in their pet dog’s excrement, all building up to a wrinkle-nosed inquiry about what travesty of a shampoo I could possibly be using to leave my hair so completely dehydrated.

Perhaps this is why I’m so honest with Andi when she asks how I feel about my hair, recently redded-up from my natural Irish strawberry blonde. ​“Well, when I broke up with my ex, I told my hairdresser I wanted to look more like Ygritte from Game of Thrones,” I mutter, blushing.

“Wonderful!” says Andi, clearly delighted. ​“I definitely see something of the warrior in you now, or a lioness. I think we can perhaps tap into your power a bit more, bring in a little more fire.”

I have to admit, it’s liberating to be able to talk about my hair like it’s, well, significant. Because hair is significant. The process of talking through what I want to bring into my life fills me with optimism. As Andi washes my hair, massaging my scalp, I meditate upon the lyrics, ​“I’m going to wash that man right out of my hair,” and wonder if the cast of South Pacific had chakra haircuts in mind. Watching split ends fall to the floor while I consider the emotional baggage I want to let go of, is oddly cathartic. (Later, Andi hands me these snippings in a paper envelope, with instructions on how I can burn it, performing my own little ​‘dispacio’ ritual at home).

“When I looked into the anthropology of hair rituals, I realised that hair is treated as culturally and spiritually significant around the world, and hair rituals and ceremony used to be commonplace,” Andi tells me. ​“It’s only in our Western culture that we’ve turned it into a chore to be squeezed into our lunch hour.”

I can see that Andi’s chakra haircut – a cocktail of therapy, self-care and self-help, garnished with a bit of witchy magic – isn’t so much a new offering as a very old one, a return to the beauty rituals we had before beauty became commodified, neatly subdivided and parcelled up. Before it was unjustly trivialised and designated mere vanity, a feminine indulgence. As Andi points out: ​“For many of us, styling our hair is the one small, semi-regular act of self-care we practice, and we can turn this into an opportunity for spiritual and emotional healing if we take the time to make it a beautiful ritual.”

As she finishes my blowdry, I feel somehow lighter and more in-tune with my emotions. I’ll admit that I came here a cynic but can’t deny that a few hours with Andi will leave me with much more than a killer hair cut.