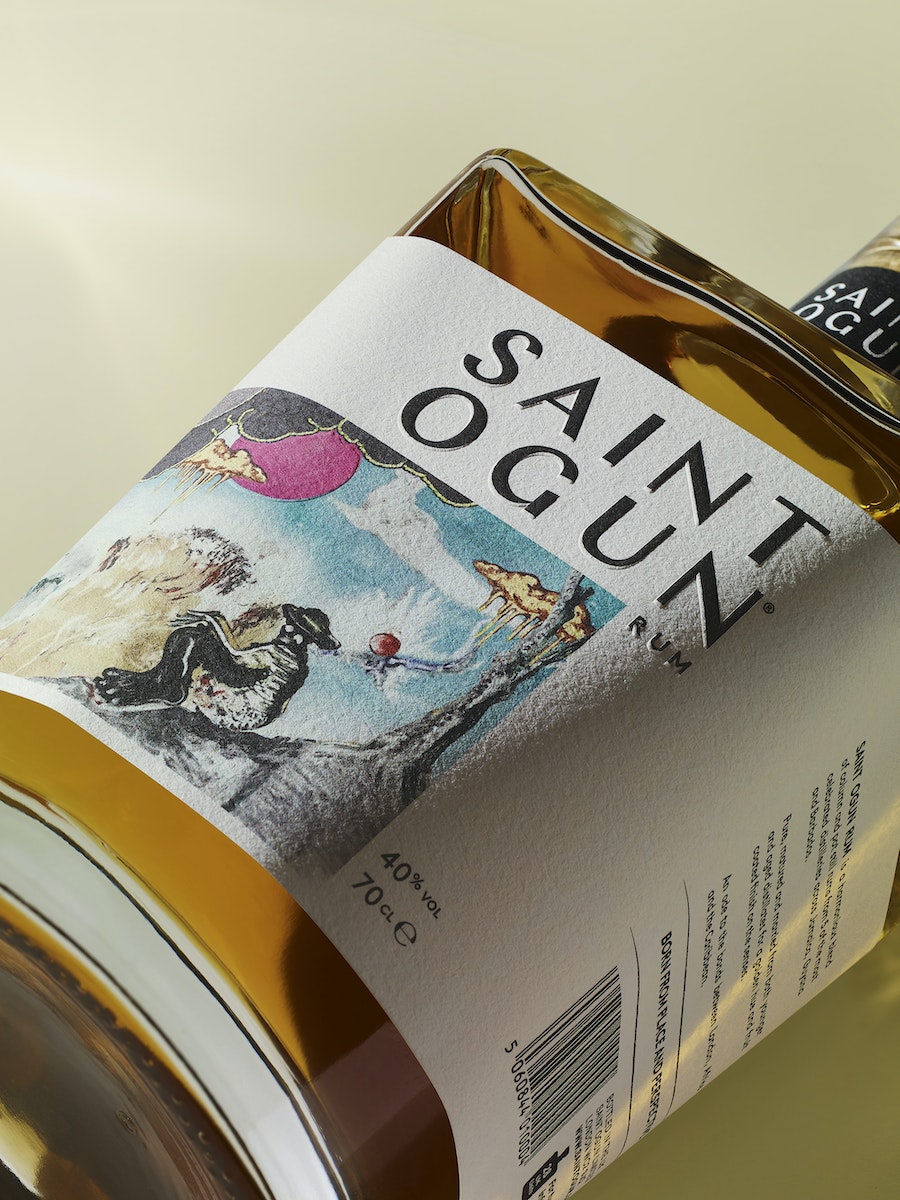 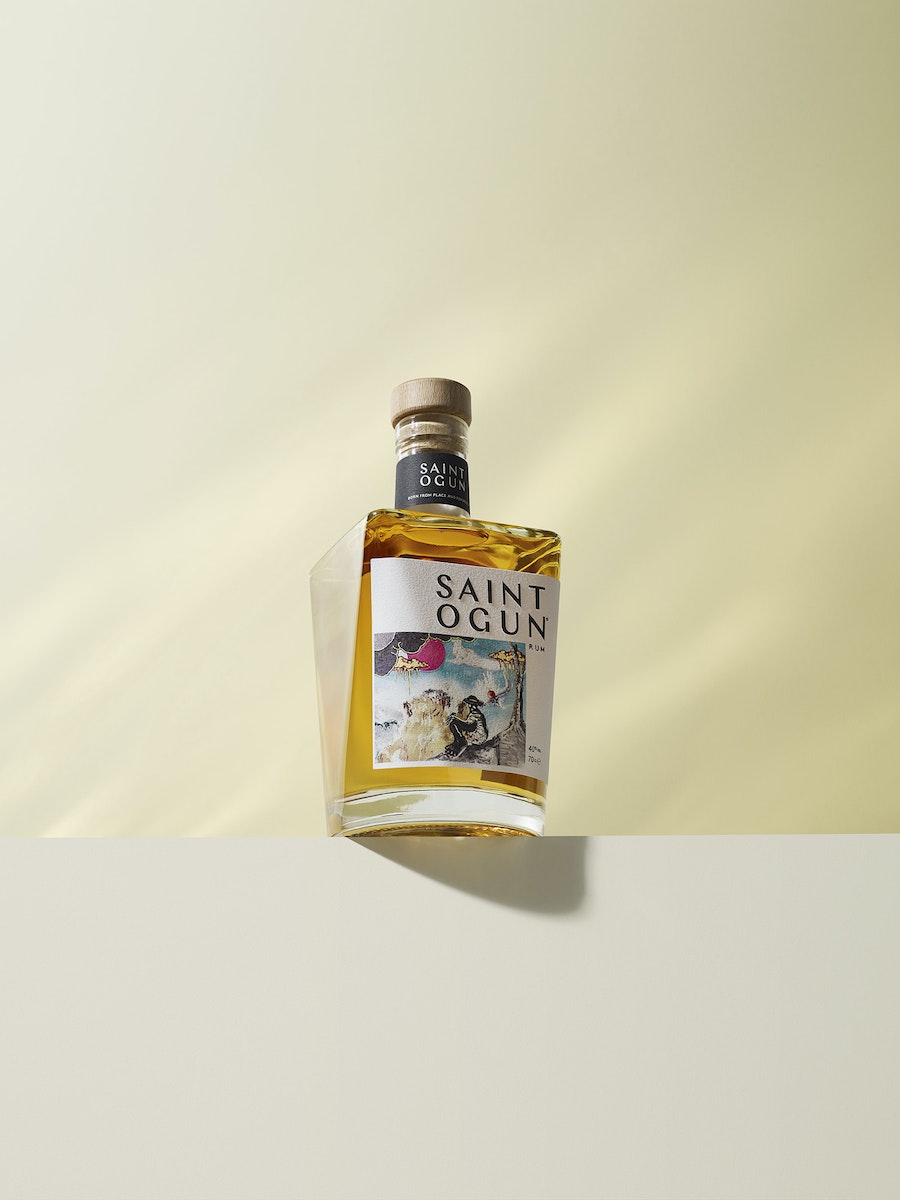 Lockdown gave Nic Akinnibosun and Rico Oyejobi the thirst for a new venture. Pivoting from their near decade-long careers in advertising, the dynamic London duo spent 12 months locking in Caribbean distilleries, taste-testing cocktails and virtually honing their design aesthetic over Zoom calls. Now, just in time for the sunshine, comes a sensationally smooth spirit with a ​“Jamaican kick” that packs a (rum) punch.

The pair’s rum is named SAINT OGUN in tribute to their Nigerian heritage, rooted in their Yoruban histories: ​“Ogun” is an òrìṣà and one of Africa’s most prominent deities.

“A God of craft, invention, iron, war, transformation,” explains Oyejobi. ​“There was a nice synergy between those worlds, and [it gave us] a lens on both African and Caribbean culture. It felt like it was the best encapsulation of what we were trying to do.”

The initial idea came while they were both sipping on a glass of rum one pre-lockdown evening at a bar in East London.

“It’s one of those silly ideas, but we thought: ​‘Why not? Let’s give it a go right now,’” recalls Akinnibosun. They were set on rejecting heavily used drinks branding tropes and borrowed cultural cues, instead focusing on creating something authentic to them. “[Rum is] something so synonymous with family birthdays, weddings and carnival, we thought this could be something that can leave an imprint on our friends.”

SAINT OGUN enlisted South African artist Simphiwe Ndzube for the slick label, contacted independent factories in Slovenia for a bespoke bottle and focused on creating the ​“ultimate blend”, with high hopes of making their independent mark in the fiercely competitive drinks market in the UK and beyond.

After a lot of painstaking research – and after piling in their savings – SAINT OGUN was launched in December. They’ve already tapped London’s independent drinks market, stocked at retailers like Superette in Highgate and Boutiques on Broadway Market. But for those not in the city, you can grab a bottle or two direct from their website.

For now the pair are still juggling day jobs, but they’re adamant that one day their alco-dream will be their full-time gig. As Akinnibosun puts it: ​“We want to show people that you can have an idea with a mate and make it happen.”

Find out how these two rum connoisseurs made their vision a reality.

You launched SAINT OGUN in December. What inspired you to start the brand?

Nic: It just came about because we both love rum. We thought: ​“We always drink this, so why don’t we actually start our own brand?” I’m Nigerian and Rico is half Dominican, and his family run a distillery in Dominica, so we were like: ​“This is meant to be!”

Rico: We always wanted it to be a reflection of our heritage and true to our lens on the world. And as Nic was saying, I have a family history of rum making. So we knew the science of it a little. But the actual product development was pretty tricky logistically. We were reaching out to my family in the early stages but, unfortunately, Dominica was hit by two hurricanes over the last five years. So that really damaged the distillery and put a pause on the operation.

What did you do as an alternative?

Rico: With rum the regionality is super important and we ended up with five great distilleries: [as well as one in Dominica we had] two in Jamaica, one in Guyana and one in Barbados. It’s great to have a mix and a variety because they all bring something to the ultimate blend, which is something we’re really proud of. Once we got those on board, we started bringing the brand to life.

Did either of you have experience in the drinks world?

Nic: Nothing – we both work in advertising! Me and Rico went to uni together at Brunel in London, then we went on our different paths. I went into film production and was an intern at MTV and a runner. Then MTV started making Geordie Shore and I was like: ​“This isn’t for me man, this is dead.” Then we both were in advertising for at least six, seven years. Last year was the first time that we worked together, at an agency in Shoreditch in East London called Mother. That was the start of the momentum really. Then we could bounce off the ideas in between work, after work, before work, about the bottle, about the design and logistics. And we used designers from work to help out.

Rico: It’s still our day job now. We’re trying to juggle it as best as we can.

How do you manage that juggling?

Rico: I have a long table and on one side is my work laptop and then the other is my personal one. I just spend my day bouncing between the two!

Nic: It’s like every and any hour we’ve got. But even though it is a grind, it is fun. We can’t lose sight of the fact that we’re making alcohol, we’re drinking rum and we’re making cocktails. The goal is to do this full-time and just show people that you can have an idea with a mate and make it happen.

Why did you finally take the plunge to launch the rum in December 2020?

Rico: Lockdown was a silver lining because it allowed us to focus and really knuckle down on a business plan. By that time we were knee-deep in the design and final logistics. And it was great to get the product out during the [holiday] season where that [drinks] sector is top of mind and people are needing something to enjoy.

Nic: We almost crammed two years of work in that short space of time because we realised, working from home, that it was now or never. That mentality shifted. We had waited for so long and this pandemic had shown that things can turn – so let’s now put 100 per cent into this.

The drinks industry is very competitive. What sets you apart?

Nic: A lot of brands will add sugars, additional flavourings or additional hints and notes to their rum. We’ve left ours very pure, and that’s how we want to treat it, down to the branding of who we are.

Rico: [As a drink] it’s very evolving. It’s definitely fruit-filled on the nose, and on the taste it’s quite zesty. It’s got a Jamacian kick as well but it’s smooth on the take down… It’s really hard talking about alcohol!

Is this a money-maker?

Rico: Yeah, the aim is to make it profitable, of course. We are entirely self-funded and we’ve been purposeful with that. In spirits, it’s quite common for people to have a big investor board and suddenly they’re everywhere very quickly. We’ve always purposefully wanted to kick this off in the right way and stay true to our vision without too many voices. And it’s not cheap – it cost five figures [to develop and launch], so a lot of savings!

Nic: We want to ensure that we’re profitable. But part of that profit is so we can give back to organisations that support grassroots creativity, whether that be in London, in Nigeria or across Africa and the Caribbean, because that’s where our roots are. We’re super excited about giving back. We’ve seen so many brands that are not connecting with us and our culture, they often feel a bit inauthentic and a bit forced. But we’ve got something to say.

Read this...
Cop a taste, here