We trawled The Curry Mile, loitered around Urbis and intercepted some Xaverian College students as they queued outside their exam hall; all to find out why young Mancs are so ​‘mad fer it’ (sorry).

From the best jazz spots to the drugs du jour, this is how homegrown teens ​‘ave it large.

What do you love about Manchester?

I love how it’s so multicultural and everyone knows each other some way or another. It’s really easy to get along with people in Manchester. If you go somewhere else people aren’t as friendly.

What venues are good here?

Band on the Wall, Matt & Phreds… There’s some bands like The Mouse Outfit who are doing some big venues – they’re from Manchester. Children of Zeus – they’re really good.

How would you compare the creative scene here to London?

It’s just not as promoted here. I don’t want to be controversial but I feel like people are a bit more humble here. They don’t feel the need to flex as much as London people do. It’s kinda within Manchester but as soon as you start to get into the circle you realise it’s booming.

How would you describe Manchester style? 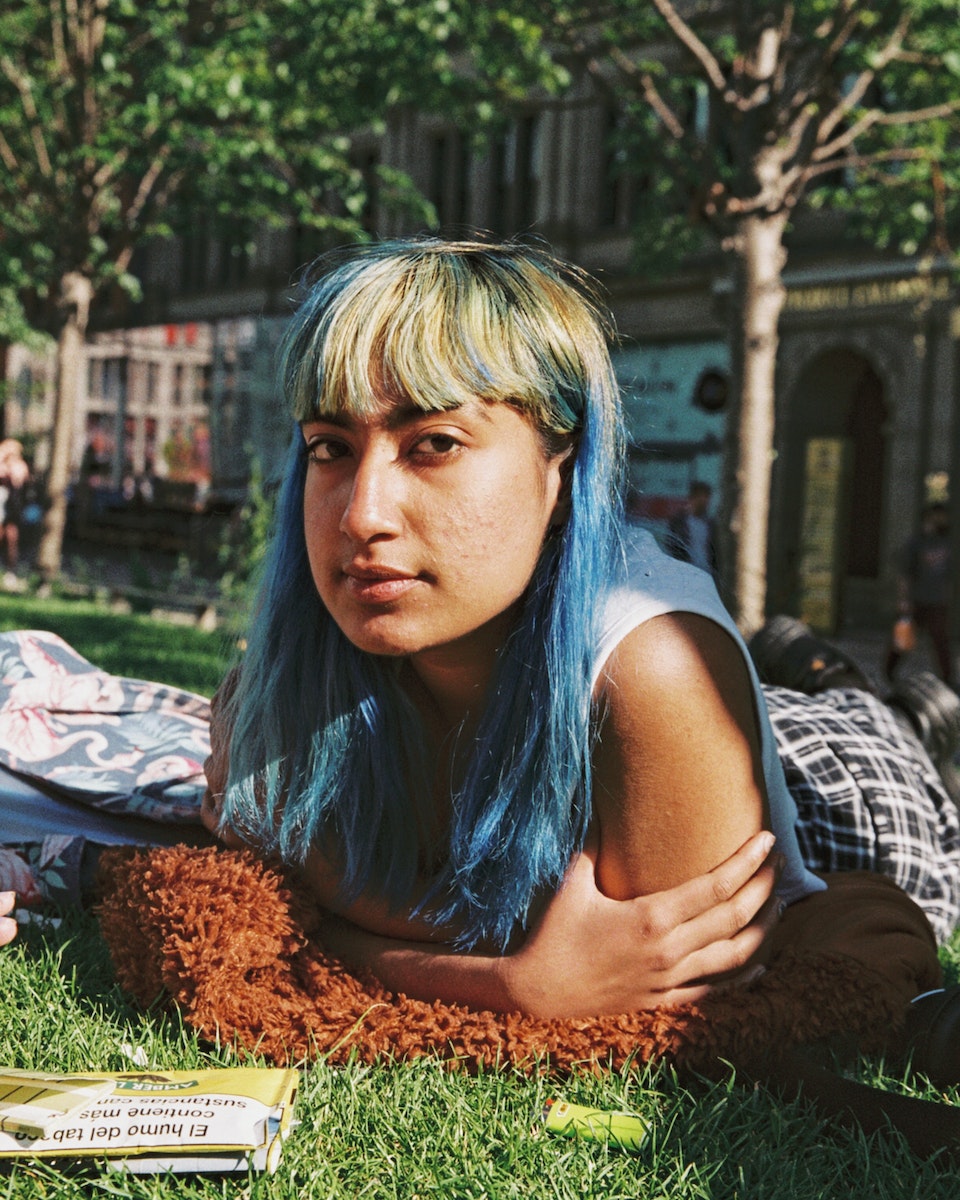 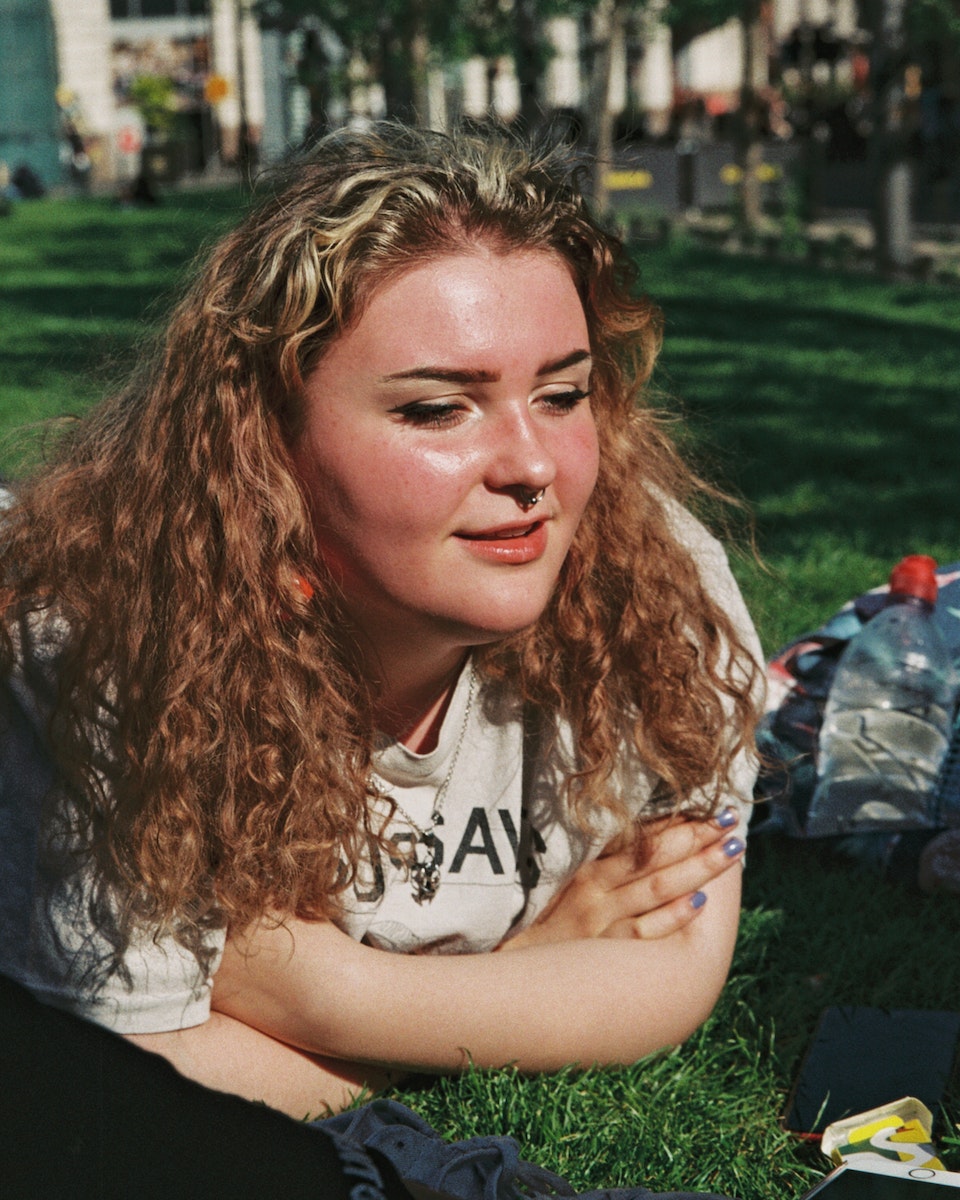 How long have you lived in Manchester for?

D: There’s some places that are really nice to go to, like the area I live in is the greenest Suburban area in Manchester.

What do you like to get up to in Manchester?

S: I like to go clubbing or go to my friend’s house and bash bare drugs.

Which clubs do you go to?

S: I only go to Factory purely for the drum & bass floor or when there’s a drum & bass night on. Or I’ll go to Hidden.

Do they have a good drum & bass scene here?

Both: They do, yeah.

Why do you think it’s so prevalent here?

What’s the most popular drug here?

D: Or spice. It’s not legal anymore. It was legal before and that’s why it became so big. Most people – especially in Wythenshawe – do spice. Especially the homeless people as well, it’s definitely a big thing that they do.

S: I’ve not done it but I’ve heard that if you see people doing it they do what I like to call the ​‘spice crease’ where they crease over in half. Like whatever they’re doing they just fold. Or they just drop to the floor.

D: Yeh they just sit on the floor looking up to the sky with their eyes slightly glazed over.

Where in Manchester are you from?

It depends on the people and the places you go. Here in Urbis is apparently cursed, but I think it’s dependent on the people.

How is it cursed?

Where are other places that people hang out?

Unfortunately there’s a place called New Bridge. I’ve never been there but from things I’ve heard I wouldn’t go. Apparently it just seems really trampy. Piccadilly Gardens is really nice, people just keeps to themselves and lays in the sun. Here everyone just gathers in a massive group.

How would you describe the fashion sense here in Manchester? 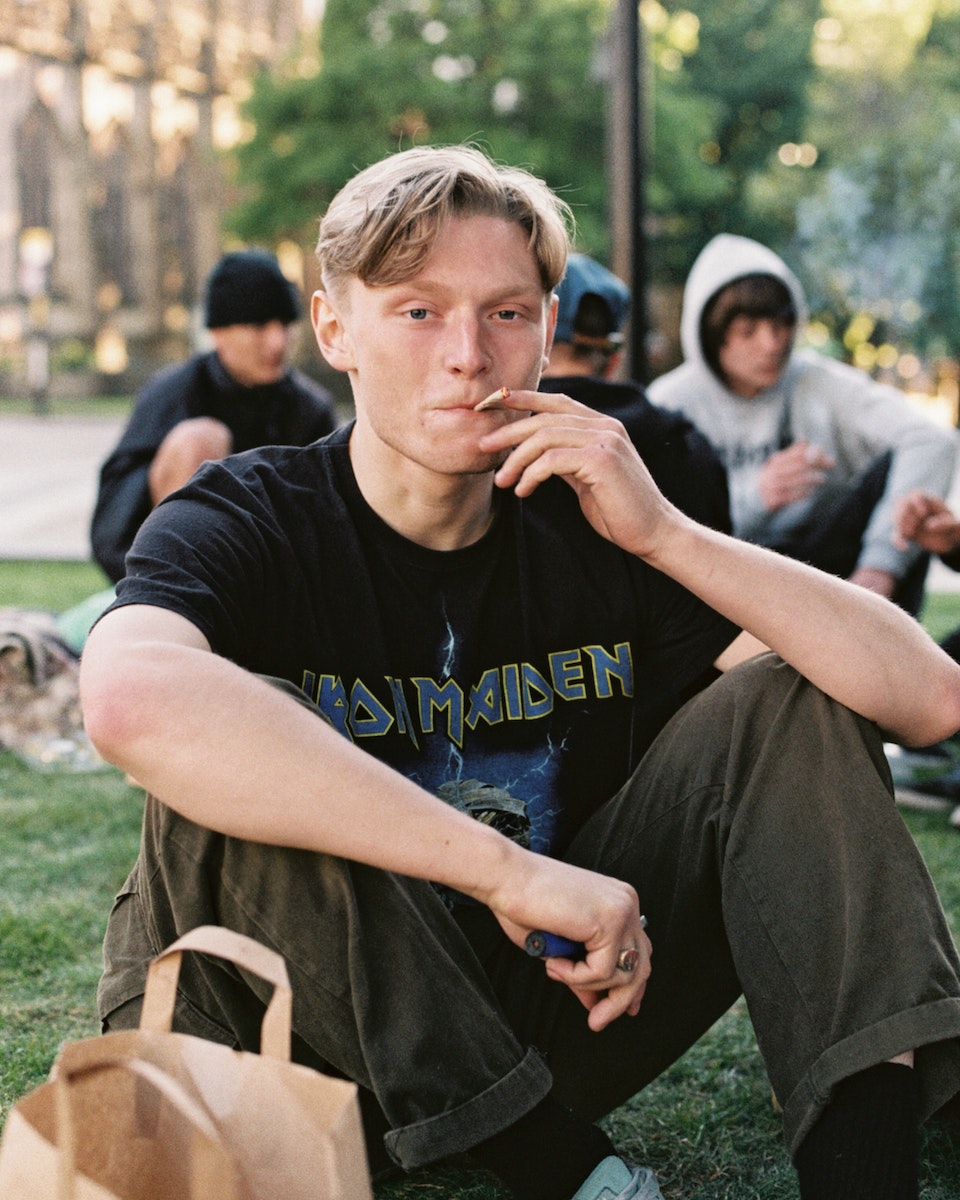 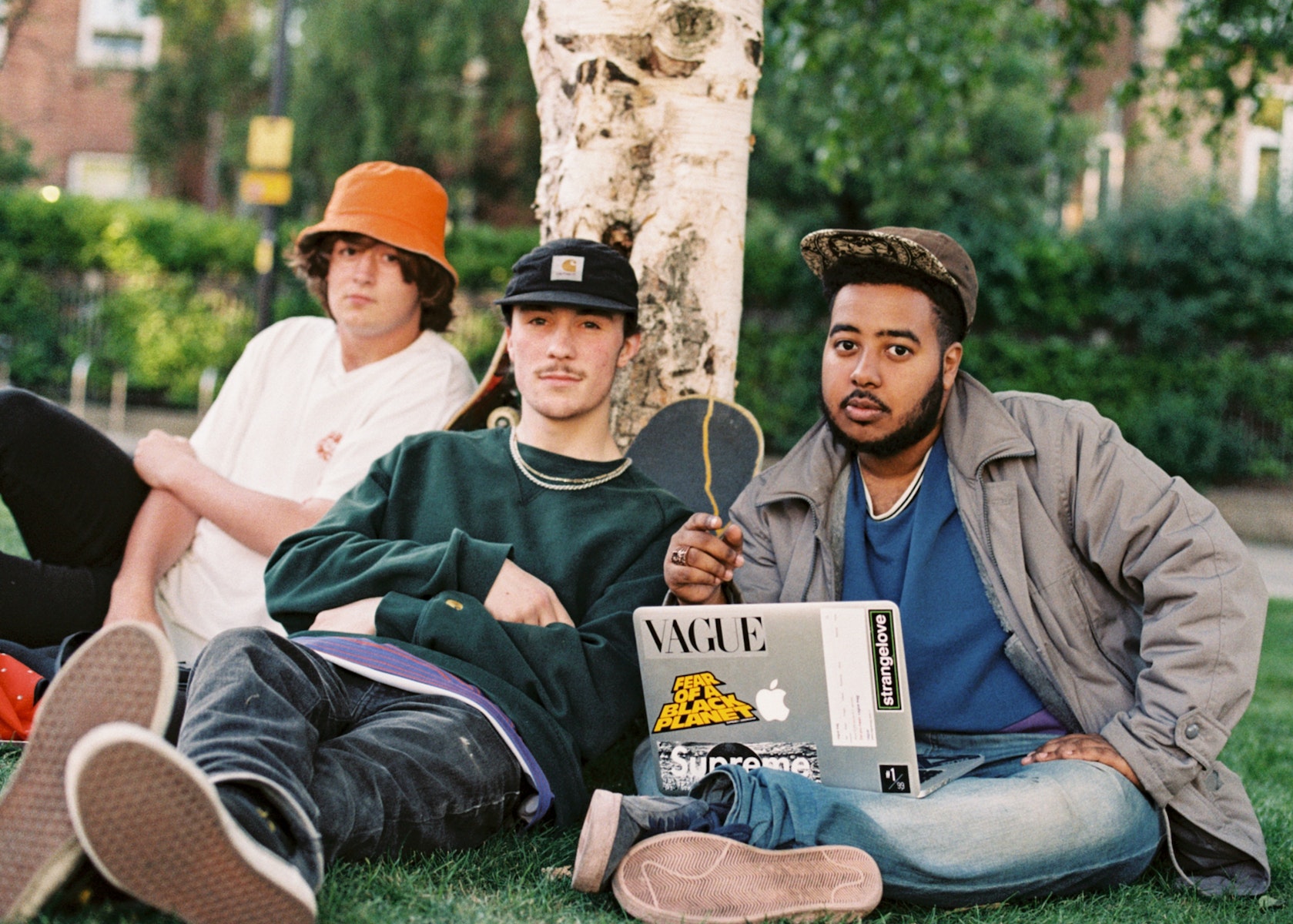 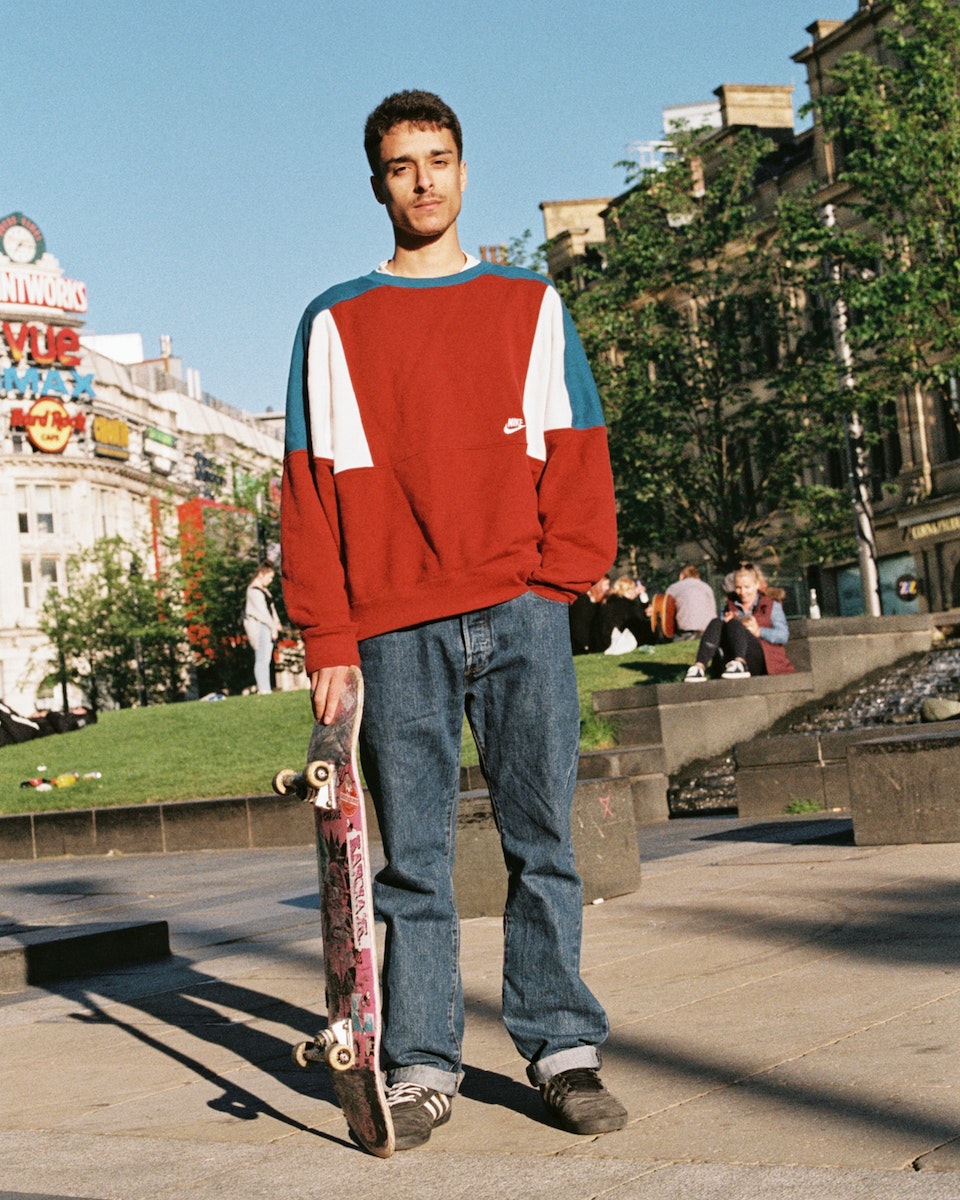 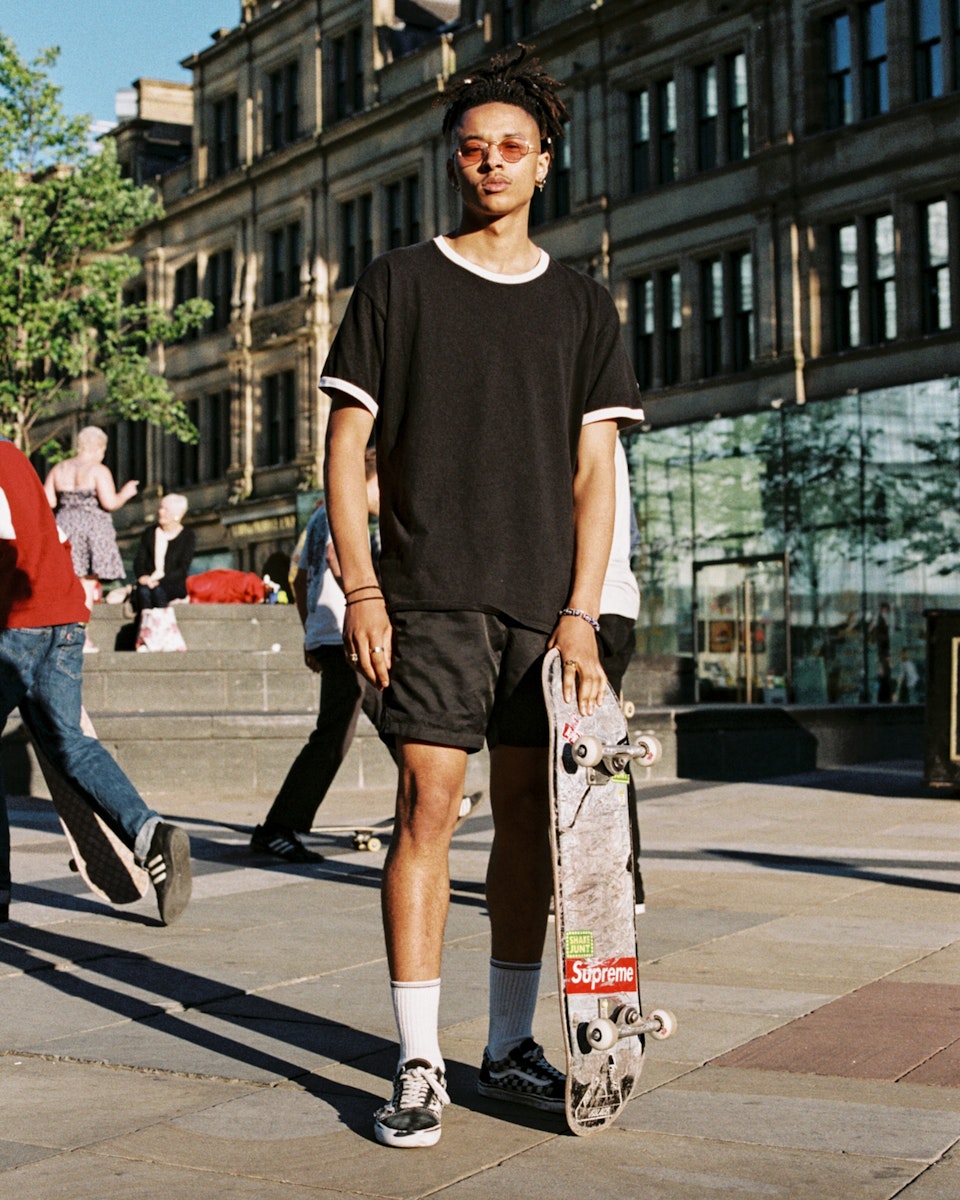 China, 18 (left): The music scene’s great. We’ve got the MOBOs – you know, Music of Black Origin, so the music scene is just fucking popping all the time.

C: I feel like the Manchester scene is getting bigger and bigger.

J: We knew Children of Zeus when they were just like us – just making it up, and now they’re massive.

C: The music is making people notice Manchester more because we’re getting out there, you know what I mean?

J: In London there’s too many people so no one’s getting noticed but here in Manchester you’ve got groups of people all coming up together. I’ve got a group of 10 or 15 friends who are all making different types of music but everyone’s on the same vibe, you know what I mean? So everyone gets along.

Describe Mancunians in one word.

How long have you lived in Manchester?

My whole life – since I was born. I’m Manchester through and through.

What are Manchester teens wearing at the moment?

Just more chilled stuff. Trainers all the time and more causal. Just wear what you want and what you’re feeling.

What brands are people wearing?

Nike – lots of Nike. I feel like there’s two different types. You’ve got the sports brands that people wear and you’ve got the group in Manchester who wear more high end brands like Balenciaga.

Where do you hang out?

Terrace in Northern Quarter. The more posh places like 20 Stories, too. I just like a nice atmosphere.

What’s your favourite thing about Manchester?

The people. Everyone’s super friendly – always up for a laugh.

Where are you from?

If someone had never been before, where in Manchester would you take them?

Jaya, 18 (left): I’m not gonna lie, there’s a takeaway over there – Crunchy’s Fried Chicken. That is a banging place man. And the wings, like £2.

B: I don’t even know, I’d take them to like a place that’s high. Like the Hilton Hotel.

B: Have you been to the spa place?

B: You’d take your girls Selfridges? To do what? Window-shopping?

What’s the best thing about Manchester?

B: The community yeah.

How would you describe Manchester style?

B: Apart from motives though, when you have to dress nice. Apart from that, Manchester doesn’t care. We’re just too chilled.

How long have you guys lived in Manchester?

Where in Manchester are you from?

Do you support Manchester United?

S: I support United. It’s like, ingrained in my family. You get me.

How long have you lived in Manchester?

How come you decided to move to Manchester?

My parents moved abroad so I fucked off.

Why Manchester over any other city?

It’s alright. It’s good for already established artists and venues. In the North I think it’s the best place for upcoming artists ​‘cos you don’t want to go to London ​‘cos it’s very overcrowded.

But what does that mean?

Yeah, I guess so. London’s almost too big for its own good. Manchester has a real sense of community because it’s smaller. It’s a friendlier city. It’s the friendliest Northern city anyway.

What do you think the fashion scene in Manchester is like?

It depends where you go. You can go some places in Northern Quarter and there’s someone who still thinks it is the 80s. Or students who are hipsters turned road-men dressed head to toe in Carhartt

How would you describe Northern style?

I think down South they’re a bit more conscious of how it is. Like clothes fit more into a certain box – you can see it in students when you go to the park, or places like that. They all wear cargo pants and things like that, which is cool. I think Northerns are just a bit more modest.

What do you do on a Friday night?

I don’t know, go to Northern Quarter or something. I use to like going to Antwerp and places like that. They’ve shut it down now, though.

Are they shutting down quite a lot of venues at the moment?

Yes, the council is shutting lots of ​‘em down. Do you remember Sound Control? They’ve replaced it with student accommodation now. That’s kinda the way all city centres are going. I think it will just push some stuff further out the city. 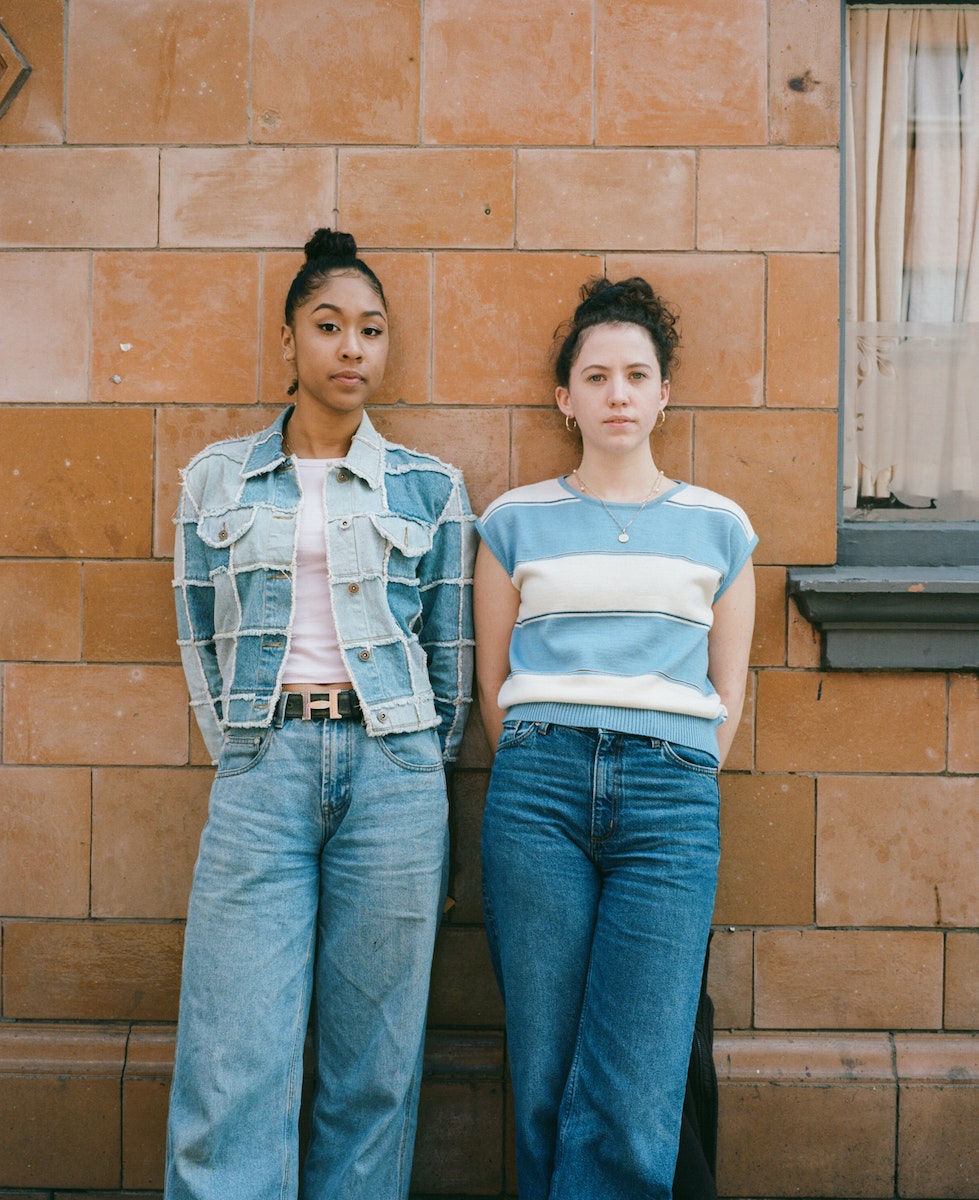 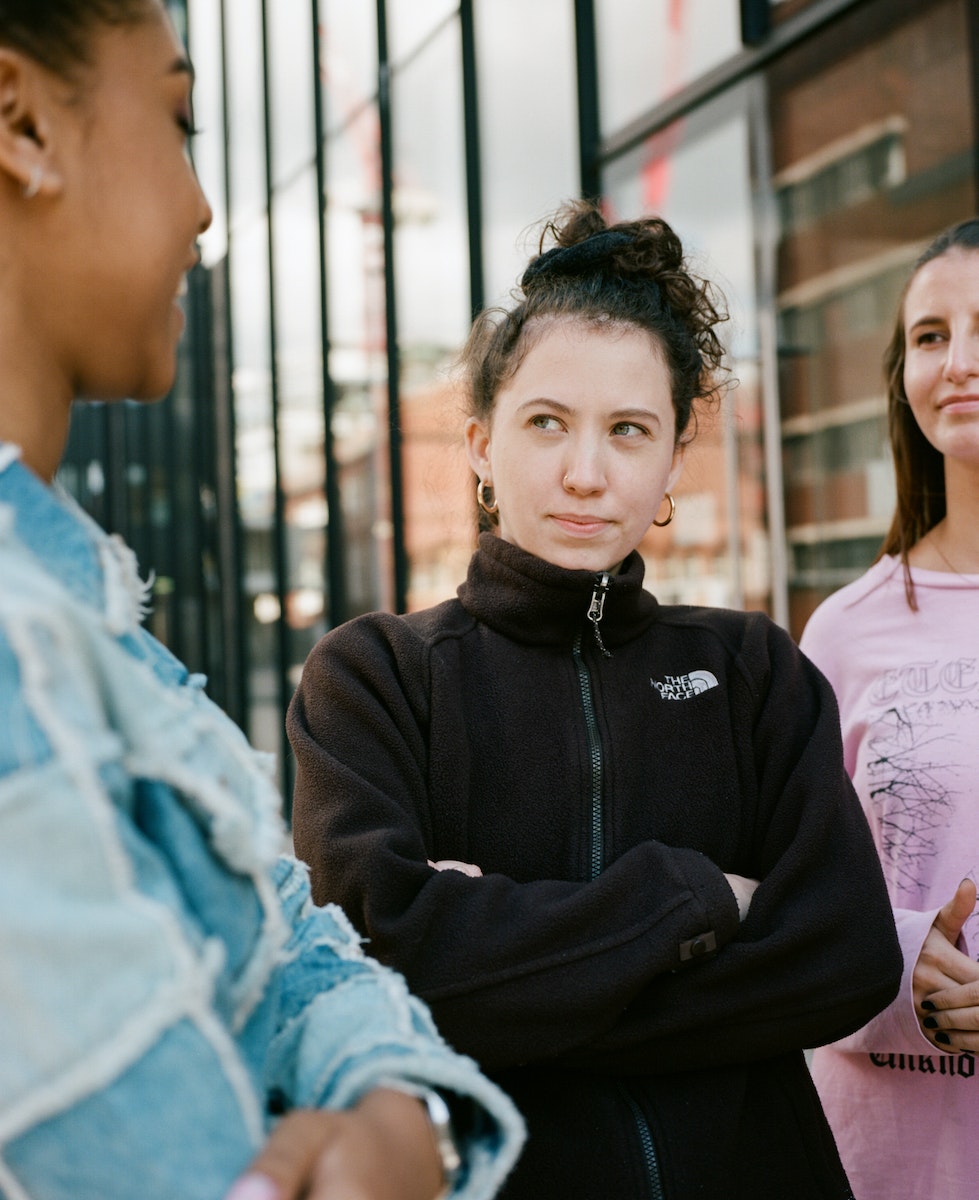