Coco Gordon Moore doesn’t feel famous. ​“I only feel that way when I can tell someone recognises me or is staring,” she tells me on a recent Wednesday afternoon in Los Angeles, here to promote her new #UGGLife campaign together with her mother, Kim.

Gordon Moore, the offspring of Sonic Youth’s Kim Gordon and Thurston Moore, grew up between the bucolic idyll of Amherst, Mass., and backstage at her parents’ gigs. She now lives in Brooklyn. Having chosen to avoid making music ​“because I didn’t want to be compared so much”, she has established herself as a visual artist and model, releasing several chapbooks of her poetry (and currently working on a new one) and walking the recent NYFW runways of Creatures of the Wind, Eckhaus Latta, and Maryam Nasser Zadeh.

Like her famous mother, she has little interest in wading into the mainstream. Everything, it seems, is for the sake of her art.

Kim Gordon has recently released a new solo album, No Home Record. Together with her band Sonic Youth, and subsequently as a solo artist, Gordon has been collecting checks and hearts as an alt-rock icon since the early ​’90s. She has remained true to herself and is still experimenting with sound. (Listen to her new track Air BnB to see what I mean.)

Gordon, who lives in Malibu, mostly enjoys eating out with friends now and making art on her terms. It’s a hard-won freedom, earned by never kow-towing to any outside pressures. She has been wearing UGGs since she lived in Massachusetts, “’cause it’s so cold”, and thinks they would be comfy on the beaches of Malibu.

Gordon is a fan of Coco’s art – she loves it all; Coco enjoys her mother’s music, but it’s so second-nature that she finds it difficult to cherry pick a favourite from her extensive back catalog. Still, we tried.

What is your favourite artwork of Coco’s?

Well, let’s see, I do like her drawings. She’s a really good poet and she’s made a couple, sort of chapbooks that I really love, her poetry.

Is there like any poem in particular that sticks out?

Why would you say it’s her drawings that speak to you most?

Well I think she’s a — I really like her writing, her poetry… I dunno, I like everything she does.

Is it something that like you helped her cultivate growing up, this art side?

I think it’s just naturally… she was just born that way. Like, I knew she would never go into science and math, because it’s not the way she thinks, the way her brain works.

One thing I’m curious about is, in your career, you’ve managed to stay so true to yourself and never sell out. How?

Well, by doing things like this [UGG campaign] that allow me to just then be free in the other things I do.

Getting a paycheck. [laughs] But I don’t expect – like I have a visual art practice, which I mainly do now, but I don’t really want to think of that as a way to make money either.

Would you suggest somebody do something for money on the side and then channel that money back work that he or she wants to make?

Well yeah, I mean everyone has to have a job. But unless they like it, it’s really hard.

Do you think, objectively, it was easier back in the ​’90s to do creative shit and not have to worry so much about finances? 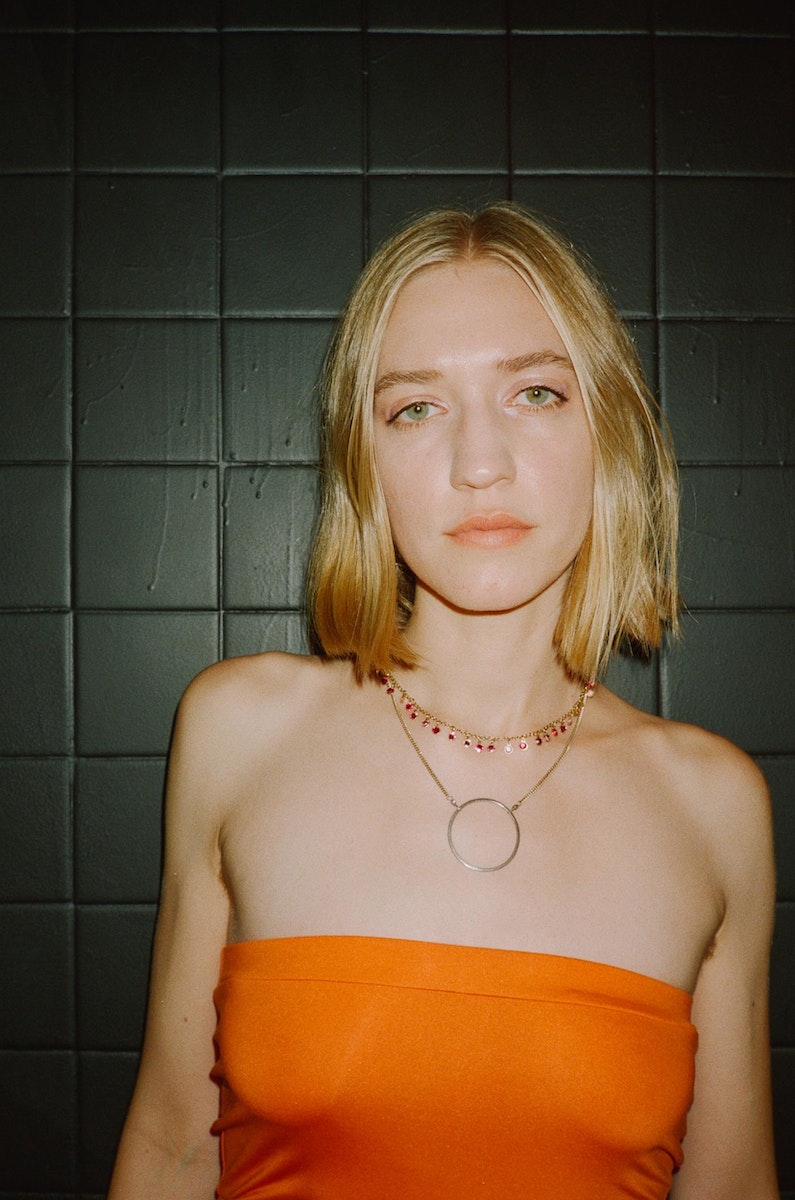 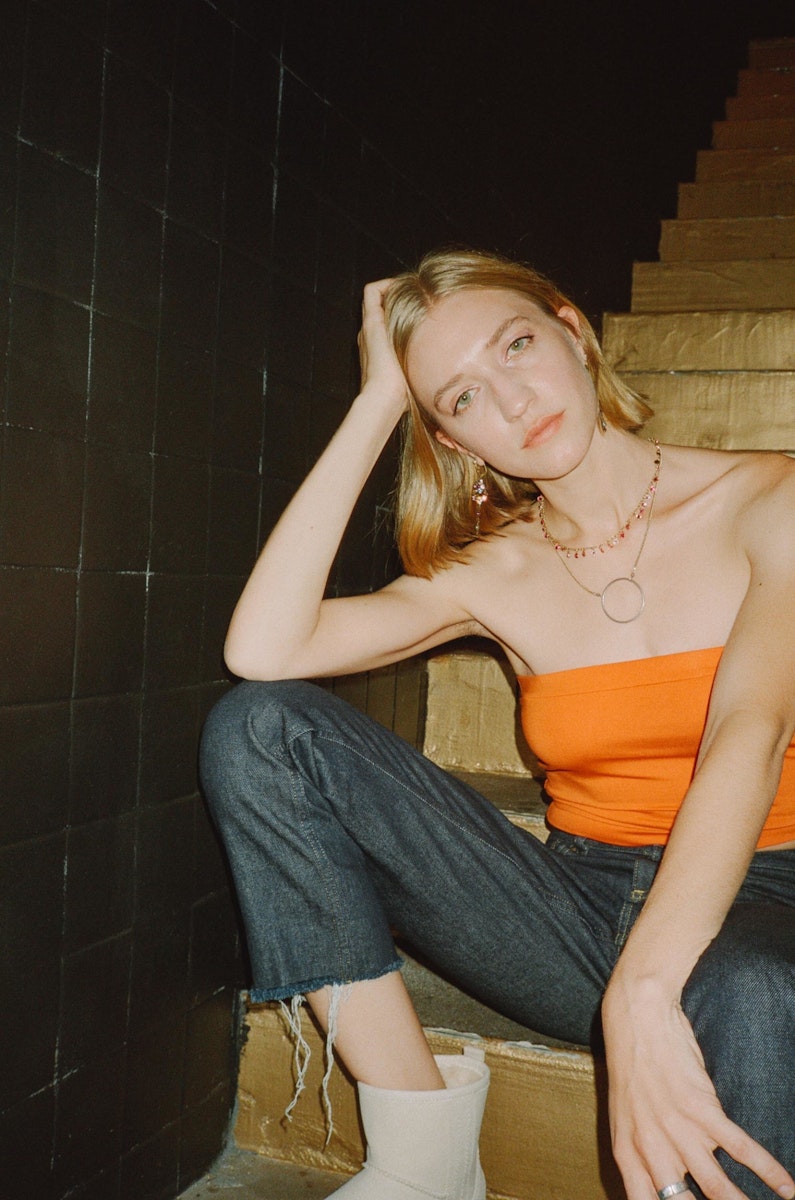 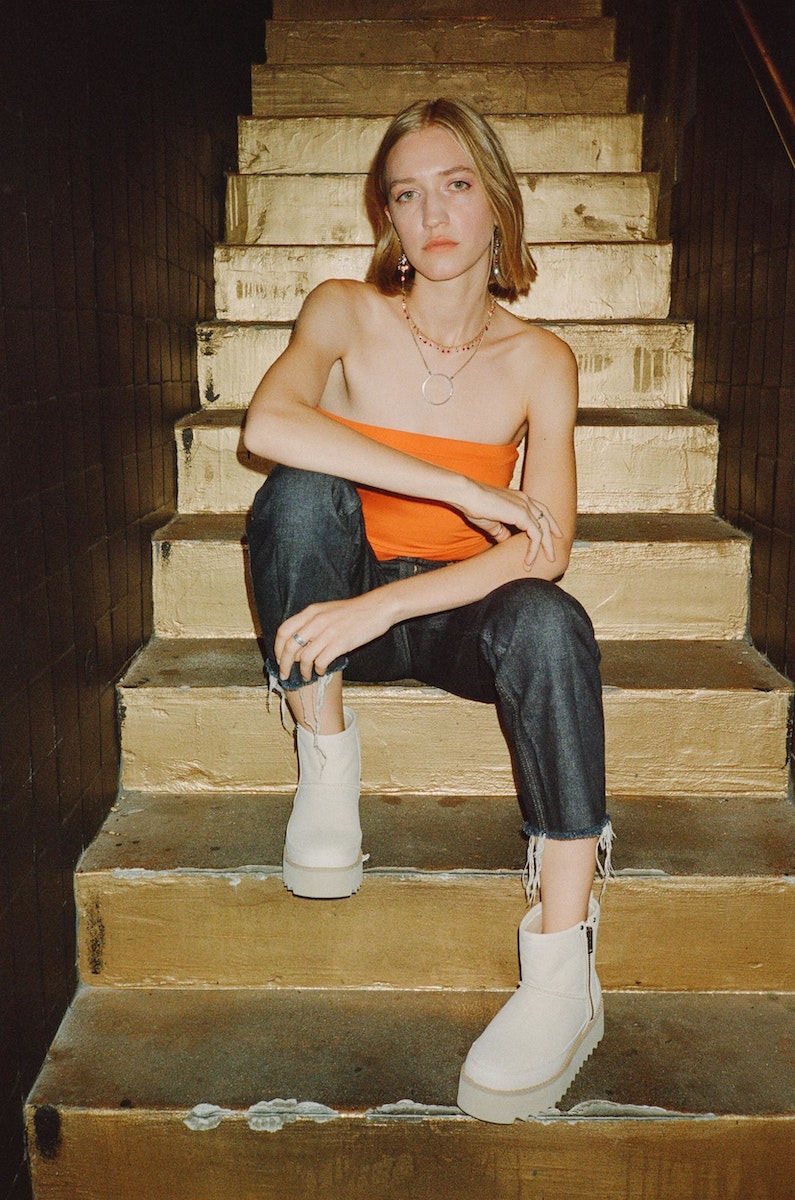 What your favourite song or album of your mom’s and why?

I don’t know if I have a favourite song. Being her daughter, I don’t really listen to her music, honestly. I grew up going on tour with her and my dad my whole life, so that was me listening to them.

Favourite song… I don’t know. I guess, which one is it, is it 100% that’s like — Alright this is so embarrassing for me, I don’t know. Let’s just go with 100%, let’s say that. It is a good song. Her singing, I always really loved her singing in Sonic Youth, and in her solo stuff, too, like Murdered Out – that’s a really dope song. And her new album [No Home Movie], which I’ve been lucky enough to hear, is really great. But yeah, I think her singing’s always been like how I would approach singing.

How do you decide which modeling opportunities to take up?

I don’t know, it’s interesting. I feel like I’m in an interesting position where I’m still pretty low-key. You know, I’m not a big model or anything. I wouldn’t really want to be in that position. I definitely have said no to certain things and I just love doing like Eckhaus [Latta] and Maryam [Nassir Zadeh] – those brands that are really chill and feel family-and friend-oriented. It’s not about using the most famous people.

Do you feel famous?

No. I don’t. That type of shit, social media stuff, that’s when I’m like, ​‘Oh, am I famous?’ Because random people hit me up. It’s definitely intense to have strangers sharing their life with you. I get a lot of messages of that, which is weird. And then also tons of creepy men – like Sonic Youth, my parents, have such a cult following – so its tons of freaks hitting me up, who are obsessive, but I just ignore it.

Do you feel guilty if you don’t respond?

Are you currently working on any new art?

So I have two chapbooks. One was published by Byron Coley and his Feeding Tube Records and all that. Then my second one was self-published. And currently I’m working on a new one. It’s pretty much all random just editing it, cause it’s a very long one. There are like 40 poems right now. So yeah, trying to like figure that out, it’s very daunting. But I take some poetry workshops by my friend and poet Elaine Khan, she teaches like the best workshops. So that’s always really helpful for editing the work. But that’s kind of it, like, I haven’t really been doing anything very visual.

Do you scribble ideas down in your iPhone Notes app?

All the time. I have notebooks by my bed and stuff that I write in, but a lot of my ideas for poetry come when I’m on the train.

Do you have a current favourite poem of your own?

I do. It’s in the new book, and it’s called Things that will destroy a good person.