One by one, a tow truck drags a parade of cars onto a muddy field in Costa Mesa, California. They’re garishly decorated; one is adorned with a giant sparkling hair bow, slightly askew. It sports a hot pink skull surrounded by gothic letters: 𝔓𝔦𝔫𝔨 𝔓𝔲𝔫𝔦𝔰𝔥𝔢𝔯. Spongebob Squarepants sits atop a blue sedan, on the pillar framing the driver’s side door, the driver begs ​“don’t hit me baby one more time”. A colourfully neon, chevron-striped car stutters onto the field, staring down the crowd with its big googly-eyed sunshade. Another, with a patriotic red, white, and blue paint job, has a bald eagle stretching its wings across the hood, screaming onto the fender, ​“Ameri-CAW!”.

These cars belong to the Damsels of Destruction, a loose team of racers who host the only annual, all-women demolition derby competition in the United States. Demolition derbies, a staple county fair event, is a motorsport that resembles bumper cars for adults. Sourcing totaled cars from junkyards, racers replace engines, weld doors, and Frankenstein parts together to create vehicles that run just well enough to ram into one another.

Ostensibly co-ed, the Damsels are outliers in what is, even in 2019, a male-dominated sport. All-women races are usually relegated to a pre-show, powderpuff match, where the wives and girlfriends serve as a warmup to rowdy crowds. Damsels of Destruction flips the script whenever they can: for their opening race, known as a Figure Eight, they recruit their boyfriends and husbands, who lap around the track, tracing the number eight, fishtailing and broadsiding one another on every tight turn.

The track is compact, smaller than an American football field. This gives the cars little room to avoid their opponents or wait out the carnage. A cramped racetrack promises maximum destruction. For safety, all the glass has been removed. The drivers sit with a helmet, seat belt strapped tight, obscured by a metal cage that takes the place of a windshield. There’s a fire truck parked next to the track with two firefighters on standby. Every time cars crash into one another, the grandstands erupt in cheers. Fenders fly off, metal crumples like paper, and tires spin furiously until their rubber tears and trails in the vehicle’s wake.

The 16 Damsels gather each year at the Orange County Fair to raise money for breast cancer awareness – and they’ve pulled in more than $65,000 in their eight-year history. A mix of experienced derby racers and intrigued newbies, the Damsels are a tight-knit family that smash each other all in good fun.

The Face asked some of the racers how they fell in love with derbies and what draws them to the chaos. 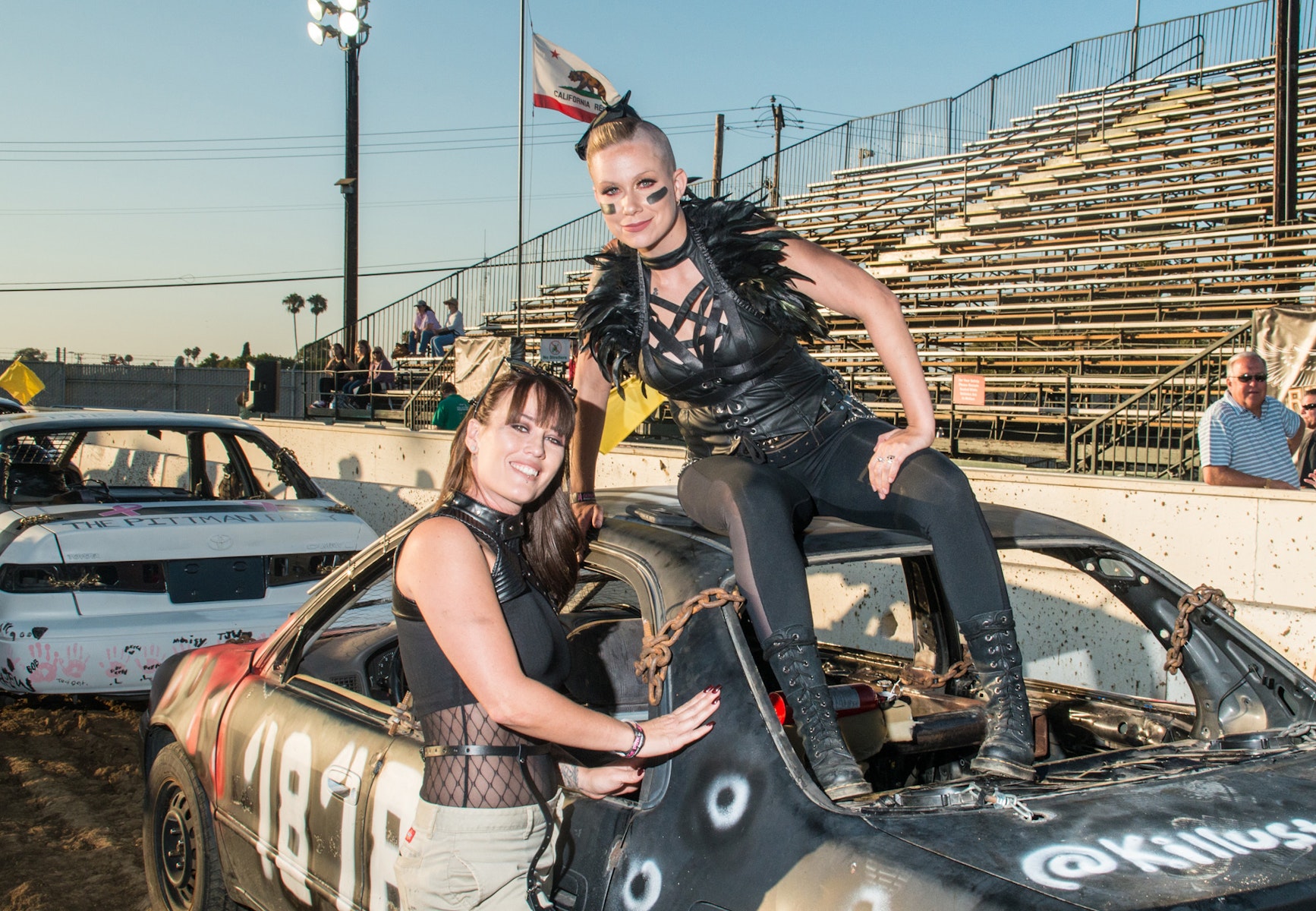 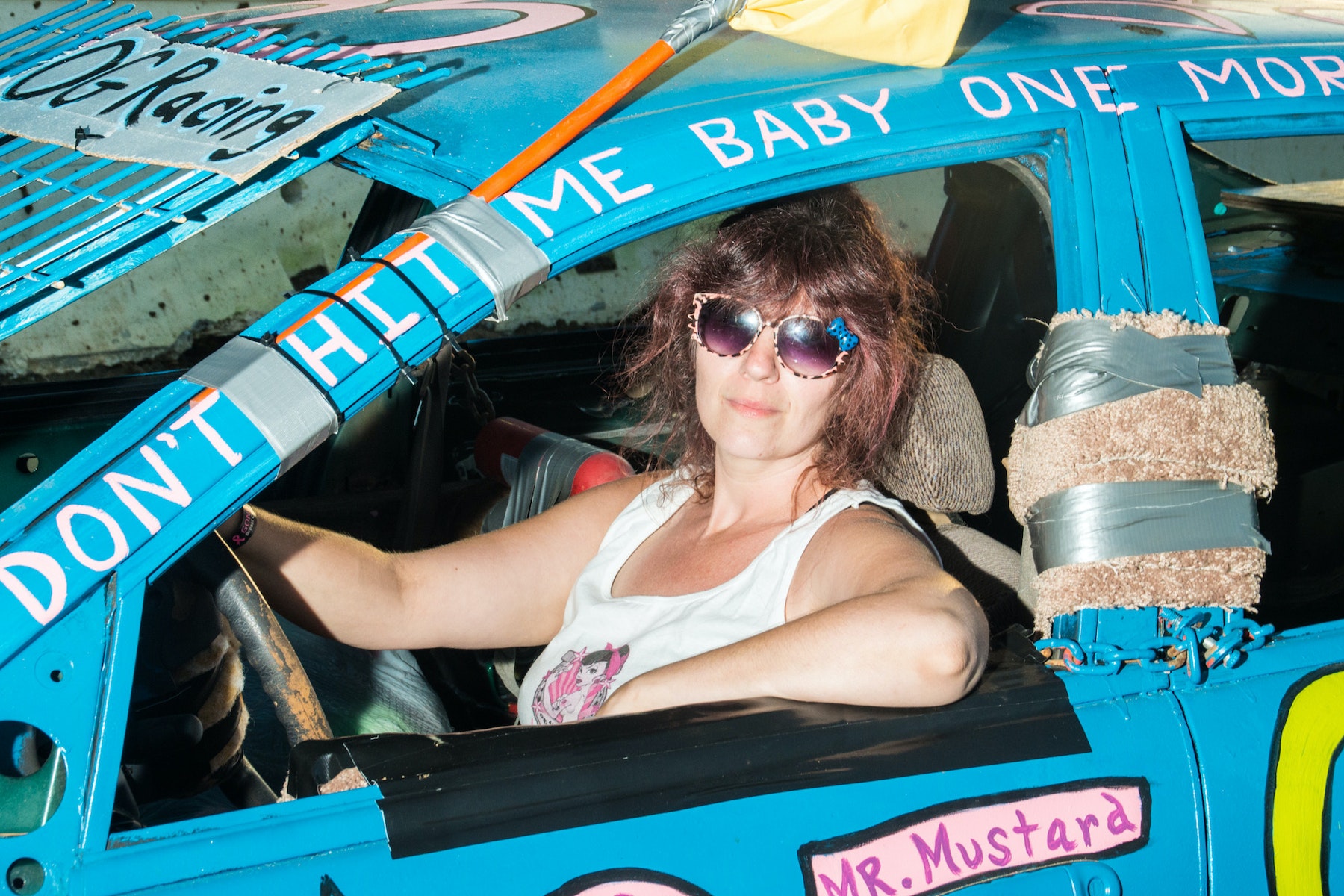 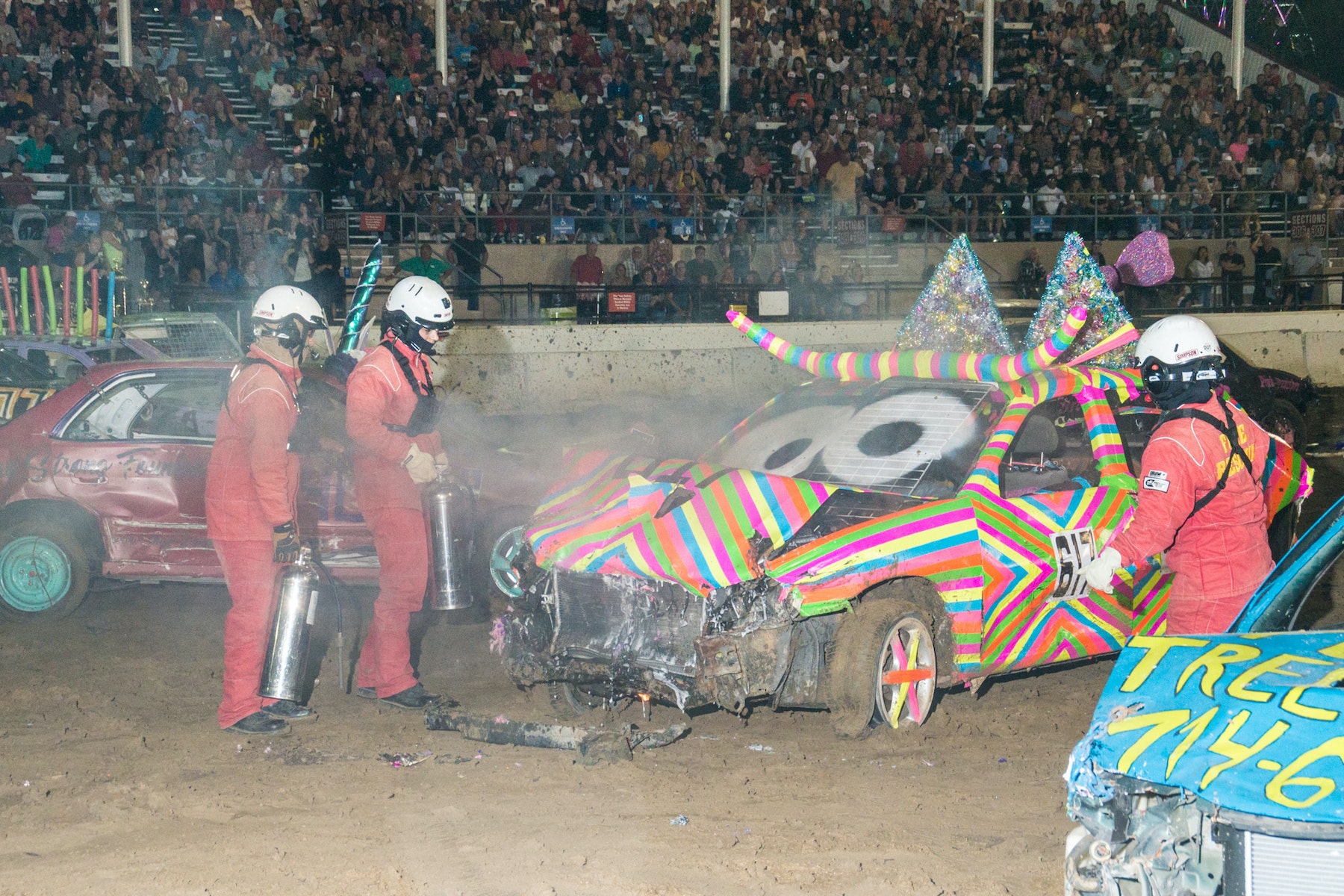 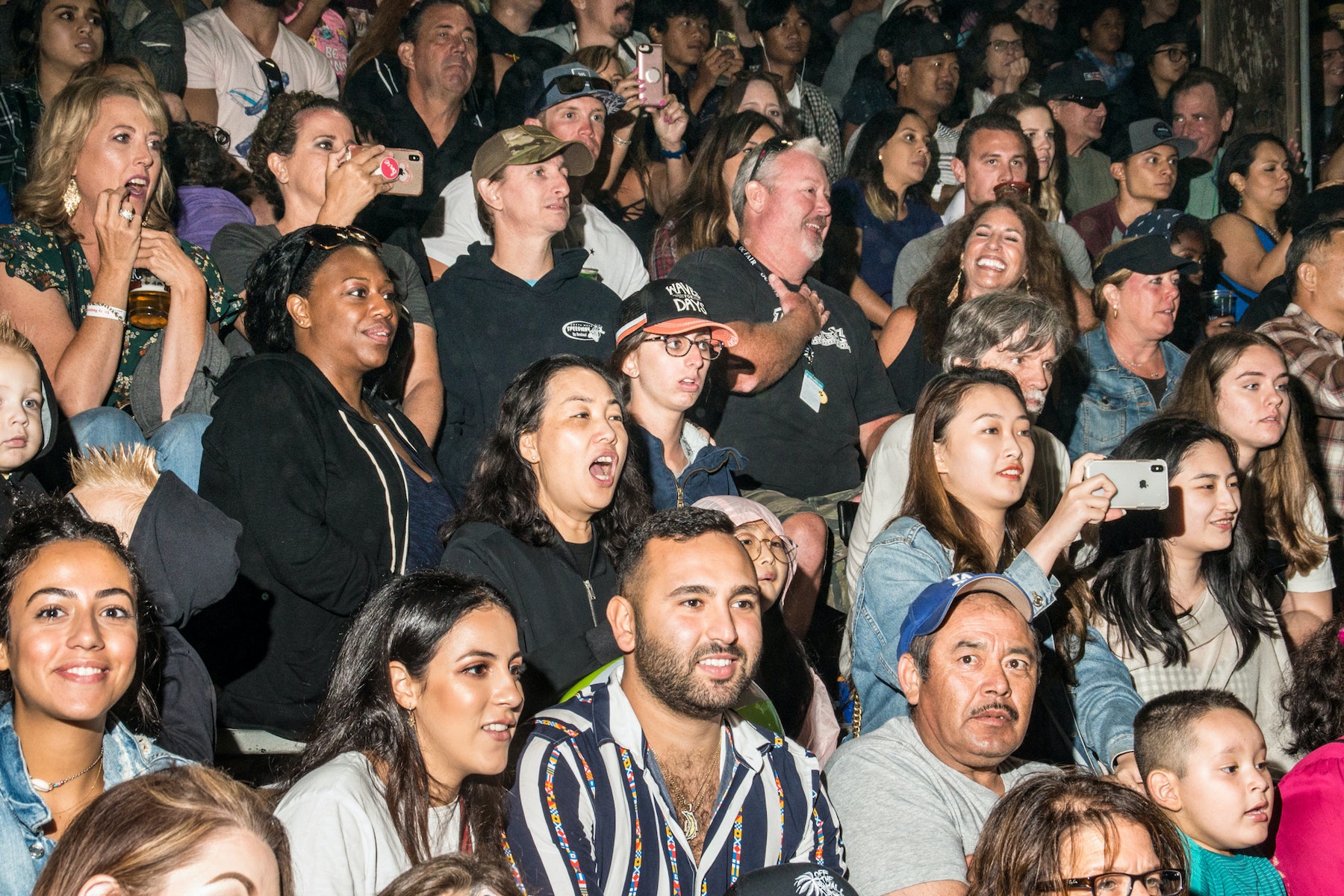 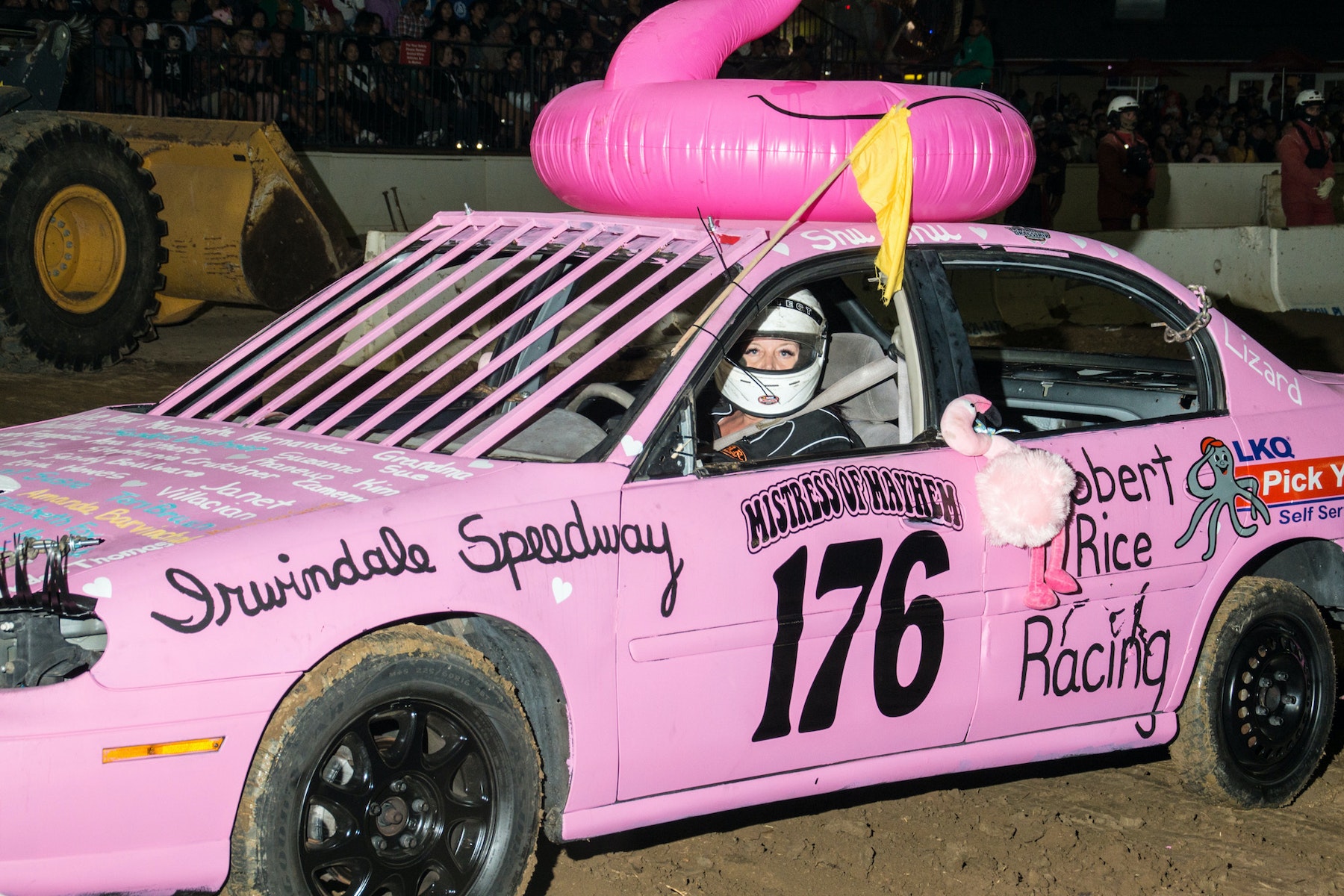 Ortega is Damsels of Destruction’s main organizer, and she is the only racer who has competed in every derby to date. ​“The original organizer had a fully sponsored car and she called me about two weeks before the derby, and she said, ​‘I’m pregnant and I have a fully sponsored car. Can you put your ass in a seat and drive?’” Ortega took up the challenge and won.

Now, she’s the mother hen. Ortega mentors the new drivers and teaches them how to survive on the course. The key is to protect the car’s front end, where the engine is located, and to rear-end opponents as much as possible. Ortega’s strategies have helped her become one of the Damsels’ top drivers, and now she races with men on the competitive derby circuit.

Ortega dreams of making the Damsels the only all-female derby team in the nation. ​“My plan with this is just to keep this team nice and strong. I would love to have a derby team that could travel state to state.” Ortega is now organizing another all-women demolition derby in Chino, CA, and will have some of the other drivers join her as official Damsels of Destruction team members. ​“I love the camaraderie with all the women here.”

As for Ortega’s desire to keep driving, it comes down to thrill and temptation ​”I love the adrenaline. I love the thrill of just smashing cars. You want to do it on the road all the time.”

Hyland won this year’s derby, outlasting her competition in her bright pink Chevy. Though it was her first time participating in Damsels of Destruction, Hyland is a seasoned derby driver who competes on the professional circuit. She learned how to love the sport from her father, and she drives in his honor. ​“That’s why I run the 176, that was my dad’s number,” Hyland says.

The ​“Mistress of Mayhem” accessorizes her car with an inflatable pink flamingo, long eyelashes (from the headlights, naturally), and poignantly, the names of many women who had been affected by breast cancer. Each detail has a purpose. ​“The Flamingo is a beautiful pink animal,” Hyland explained. ​“It’s gorgeous, just like all the survivors out there.”

“All my race cars always have lashes on them. It’s like my trademark,” Hyland continues. ​“I always tell everybody that I like to play with the boys but I don’t want to look like them.”

On a more serious note, Hyland gestures to the dozens of names written on her car’s hood: ​“there are people who’ve passed, who are angels, as well as many survivors.”

To overcome her driving phobia, Pachella became a derby racer. ​“I didn’t get my license until I was maybe 22 or 23, and I still was not confident enough to drive a regular car,” Pachella explains. ​“Once I started driving derby, it helped me get behind the wheel of a regular car, and I don’t have as many fears as I used to.”

A mortician and mother of three, Pachella still finds time to work with her husband to build all the cars for the derby. While Pachella’s husband was instrumental in helping her get comfortable behind the wheel, she didn’t want to simply drive. ​“He taught me how to weld. He taught me how to replace a motor. And then after that, I went to welding school and I got certified.” Without the Pachellas, the Damsels of Destruction wouldn’t have their vehicles.

Pachella grew into a fierce competitor, and shares one of her favorite derby memories: ​“One of the best things I’ve ever done is drive a motorhome. It’s a lot different than a regular derby. It’s cushier. It’s like hitting somebody with a marshmallow,” she says before adding, ​“I ended up winning one of [the motorhome races], even beating my husband in it.”

Hardy has returned for her second year with her daughter as part of her pit crew. Hardy’s car is decorated with black widow spiders, reflecting her own personal hardship. ​“I’m a widow,” she explains. ​“It’s just something that I identify with, it’s something I deal with every day. It kind of plays a big part of my life.”

Hardy hopes the derby won’t be a repeat of last year’s debacle. ​“My car smoked-up the whole stadium, nobody could see anything. Everyone thought something really bad had happened — my mom comes running down, and my daughter’s running down, trying to save me. And then here I come through the smoke, and they’re like, ​‘oh, she’s okay,’” she laughed. ​“It smoked up the whole stands and everything.”

Mutch, a third-year driver, has such a passion for the competition that she flies 833 miles from Colorado Springs, CO to race. ​“Letting people know – that have been diagnosed with cancer – that we have their backs in a unique way I think is really fun. That’s what keeps me coming,” Mutch said.

Last year, Mutch was out of the race early, but drivers stay on the field because there’s no safe way to exit the arena while the match is in progress. ​“Your adrenaline’s going and you can see the cars coming towards you,” Mutch recalled. ​“I like to go fast, and I like that I’m getting into a controlled car accident.”

After this, their main event for the year, members from the Damsels of Destruction will make other appearances in Southern California in the coming months. Like Ortega, Hyland is adding another women-only derby into the circuit. Her car sponsor, Robert Rice Racing, will host another charity derby at the Irwindale Speedway on October 12, with all proceeds benefiting the American Cancer Society.