Earl Cave sprints up the stairs in his parents’ all-pink Brighton seaside home to fetch his journal. This is where the actor is spending what he calls, simply, ​“iso”, with his father, vampy rock’n’roll icon Nick Cave, and his mother, Susie Bick. He wants to share a passage he’s written. On the way, he describes his surroundings. Cave tells me about a father and son who play cricket every day on the lawn in front of the house. (“They’re getting really good since they first started,” he says, breathlessly.) Finally, he has located his journal.

“I never really know what to write about,” the 20-year-old says. ​“I just take a random thing that I see in front of me or in a book, where I flip to a random page. I had this little book on birds. There’s this one page that talked about a kestral and hobby and then these two birds that are a falcon of sorts. They live in entirely different climates. I wrote a little story about those two birds.”

He clears his throat. ​“This is day 42,” he says, prefacing the impromptu reading.

“The kestrel and the hobby both patrol their favorite branch of their separate family trees. They’ve all heard about the egg snatcher that comes by at night. It swipes and creeps and tiptoes in the dark. They thought of what it looked like, but nothing came to mind. Only a shadow in motion with bright eyes. The peregrine and the merlin hunch over the favourite stone of their separate family cliffsides. They know about the egg snatcher too. A small bird told them. But for now, I’ll rest on my bed of shelves. And I’ll just slip away.”

He pauses for effect. Cave is a natural performer, even when reading a journal entry over the phone. Yet he possesses that sort of British quality of being confident without basking in the pulsating glow of his own talent. He first appeared with a small role in Netflix comedy The End of the F***ing World, but his career is heating up: he played Dan Kelly in the True History of the Kelly Gang and now, he’s simmering in a stew of boredom as a bummed out teen in Days of the Bagnold Summer.

It’s the directorial debut of The Inbetweeners’ Simon Bird, and calls back to the disillusionment of Terry Zwigoff’s Ghost World. Daniel (Cave) is a hardcore metal fan, whose planning to summer with his absentee father in Florida. But when his dad tells him it’s a poor time to visit, Daniel is forced to stay home with his mind-melting librarian mum (Monica Dolan). Their chalk-and-cheese relationship is stretched to its limits when she starts dating his former teacher. And for Cave, whose own greasy hair sat so well on the shoulders of such a disaffected thrasher, this was a role he was seemingly born to play. 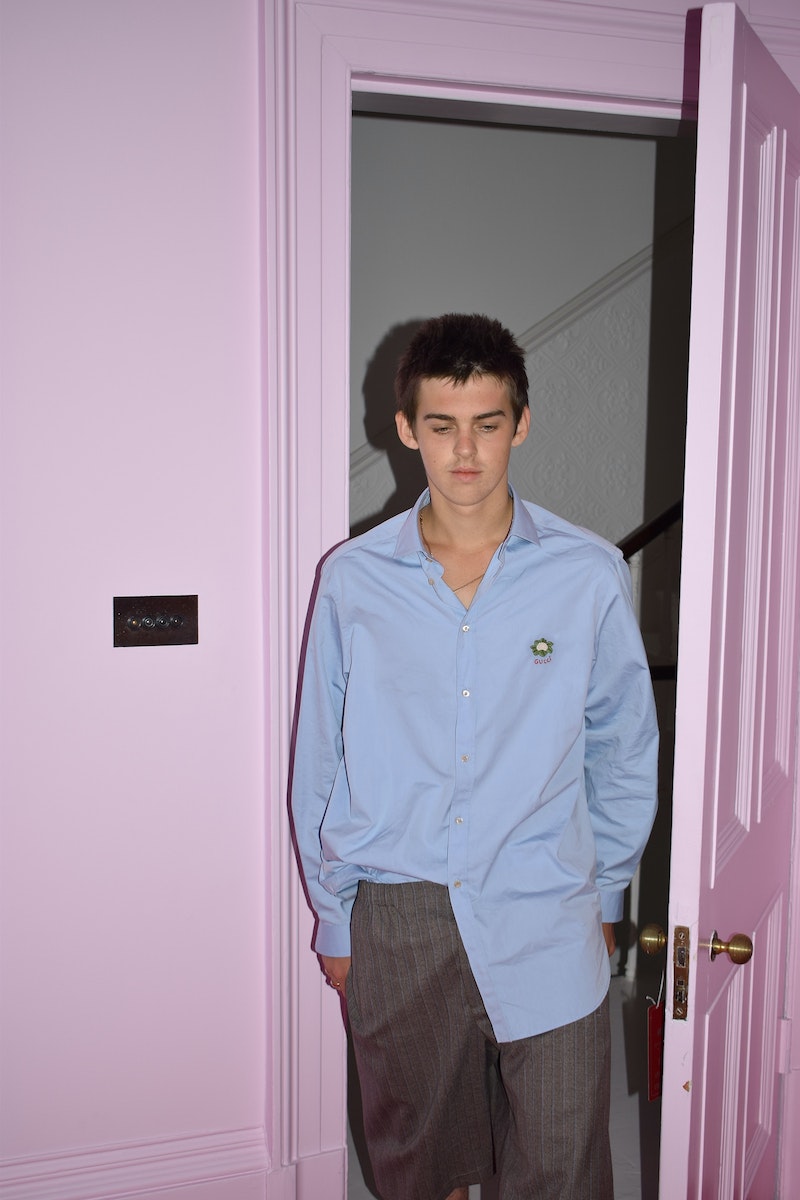 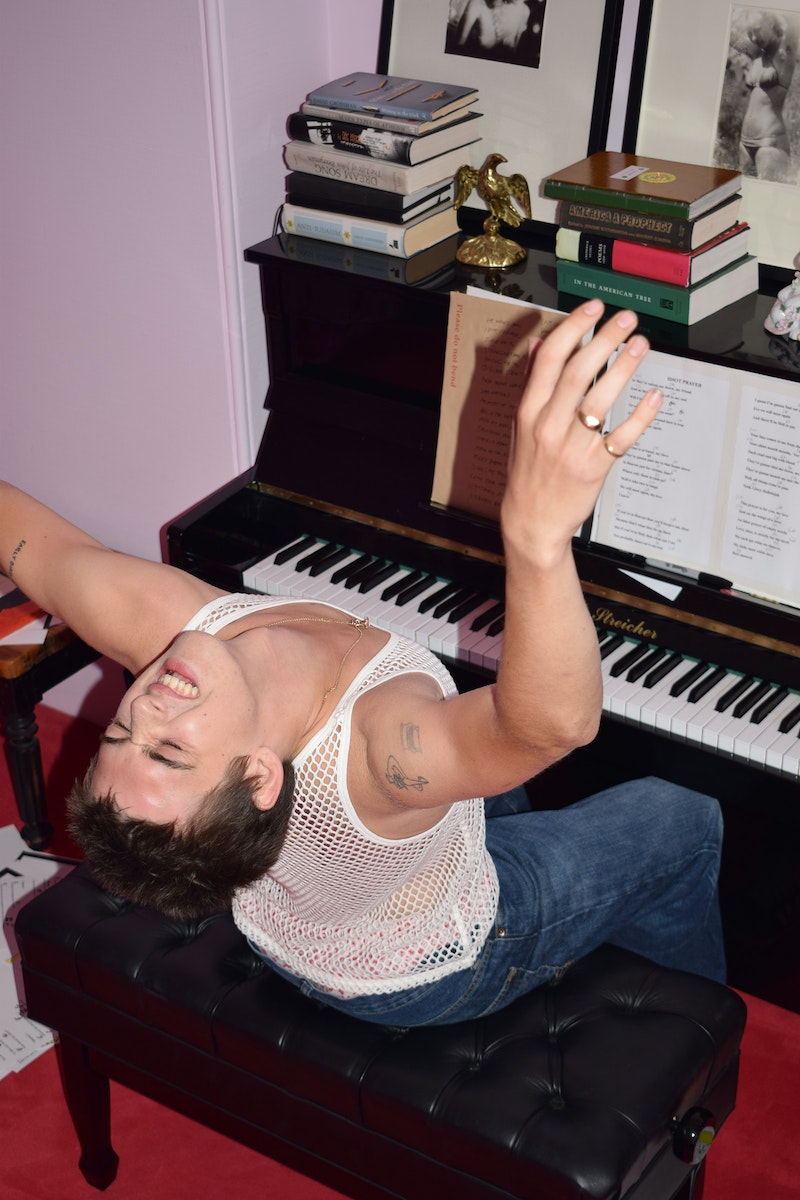 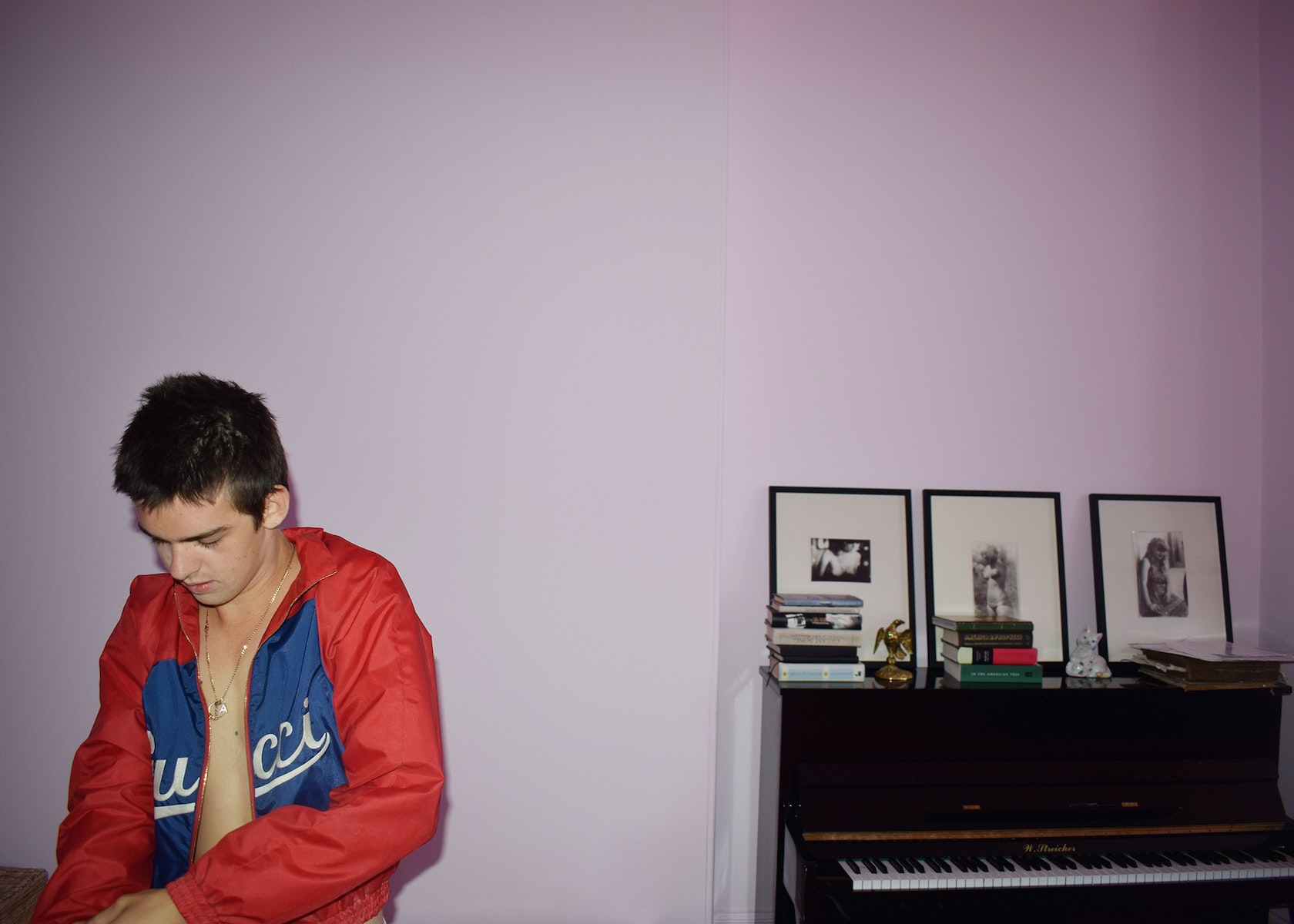 Did you read the script and think, ​“Hell yeah, I can play this asshole goth teen!”

I already had the long mop of hair. And they sent the comics, because it’s originally a graphic novel by Joff Winterhart and they sent a screenshot of some of the pages. And I looked exactly like the guy. Mum was like, ​“This is it, this is the one. This is your part.” I was like, ​“Oh my god!” It looked really eerily similar to me, if you have the most to see the graphic novel. It’s very strange.

Drop the hair routine, what do you do?

Well, the hair is no more. I shaved it off. [During production], it was already pretty gross and there wasn’t really much you could do with it. I washed it every now and then. At the wrap party, we all got a bit pissed and I got one of the hair girls to cut bangs with the long hair. So I had this ABBA haircut for quite a while, and it was really bad. My hair was down to my waist with this straight cut fringe.

How did you muster the energy to be so horrible all the time?

It’s actually quite hard. It’s quite horrible to stay in that place of being fed up with someone when you’re not. You’re trying to be all sad and one of the makeup girls comes up to you and they’re like, ​“Hey, how’s it going?” You’re like, ​“Oh, it’s really good! Oh, fuck, I’m really sad.”

Did you and Monica, who plays your mum, ever have any fun hanging out together?

Yeah, we hit up the casino in Southend, which is the little seaside town that we go to. We all went to the casino one night. Monica and I lived next to each other so we get the car into set at the same time. And she’d be trying to play Barry Manilow songs and stuff like that to get into the character. I’m just like, ​“Fucking turn this shit off, Monica!” And then I’d try and play Metallica, even though I’m not the biggest fan, but I was just trying to listen to it as much as possible. It would be like our characters.

How would you describe your personal style? Are you a Gucci fiend or are you happy in just a Metallica T‑shirt?

I don’t really wear brand‑y stuff. If I go out to an event or something and maybe I’ll wear something like a suit or something cool. Right now, I’m wearing chef pants and an Elvis T‑shirt. I wear pretty blokey stuff and I skate as well, in really baggy clothes. I like the way clothes feel more than they look. I like how they feel when you wear them. 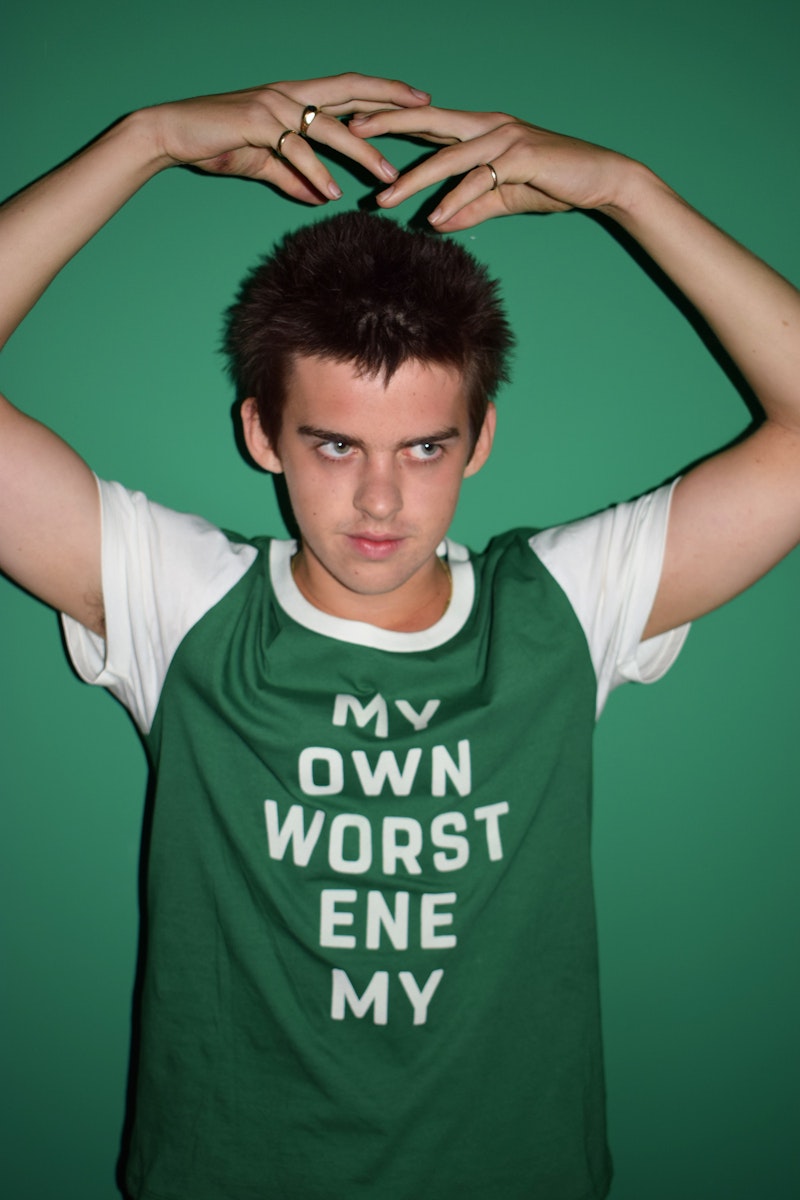 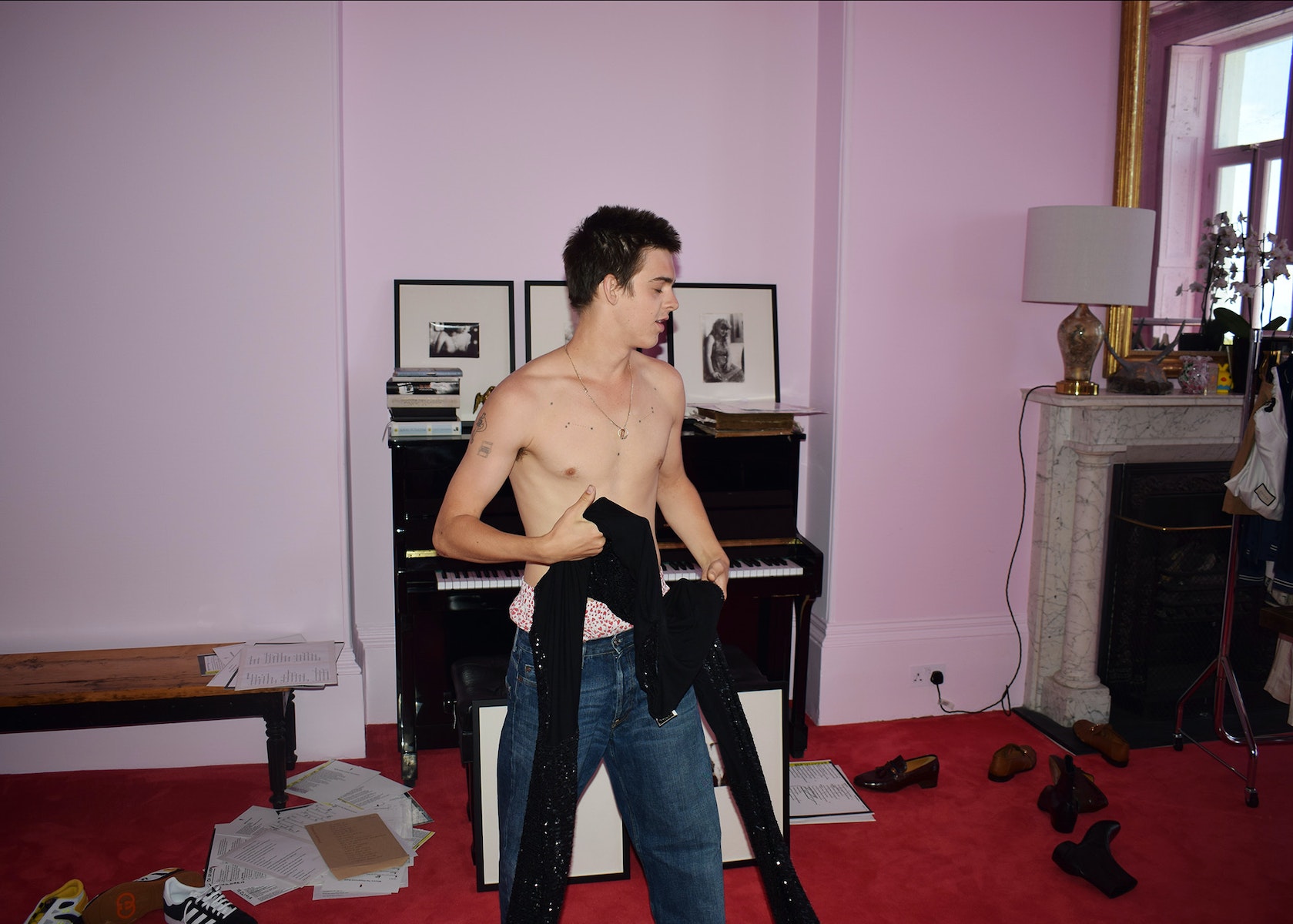 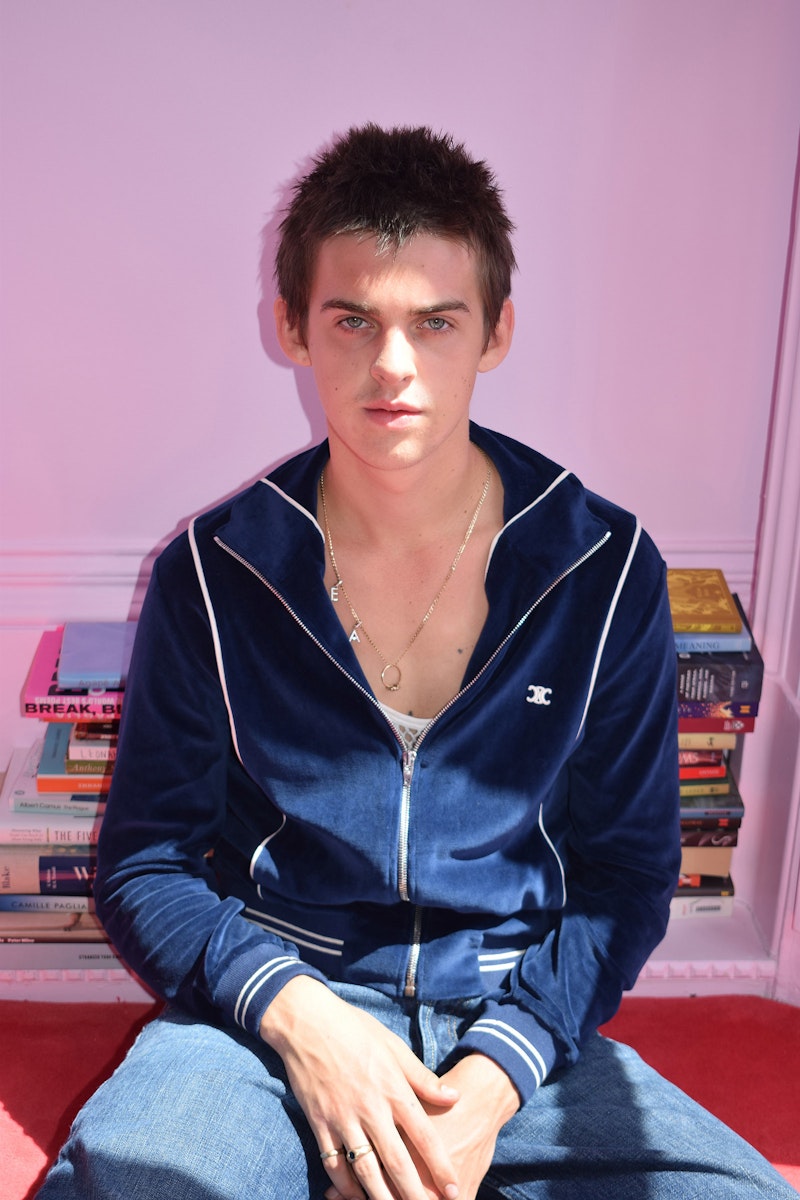 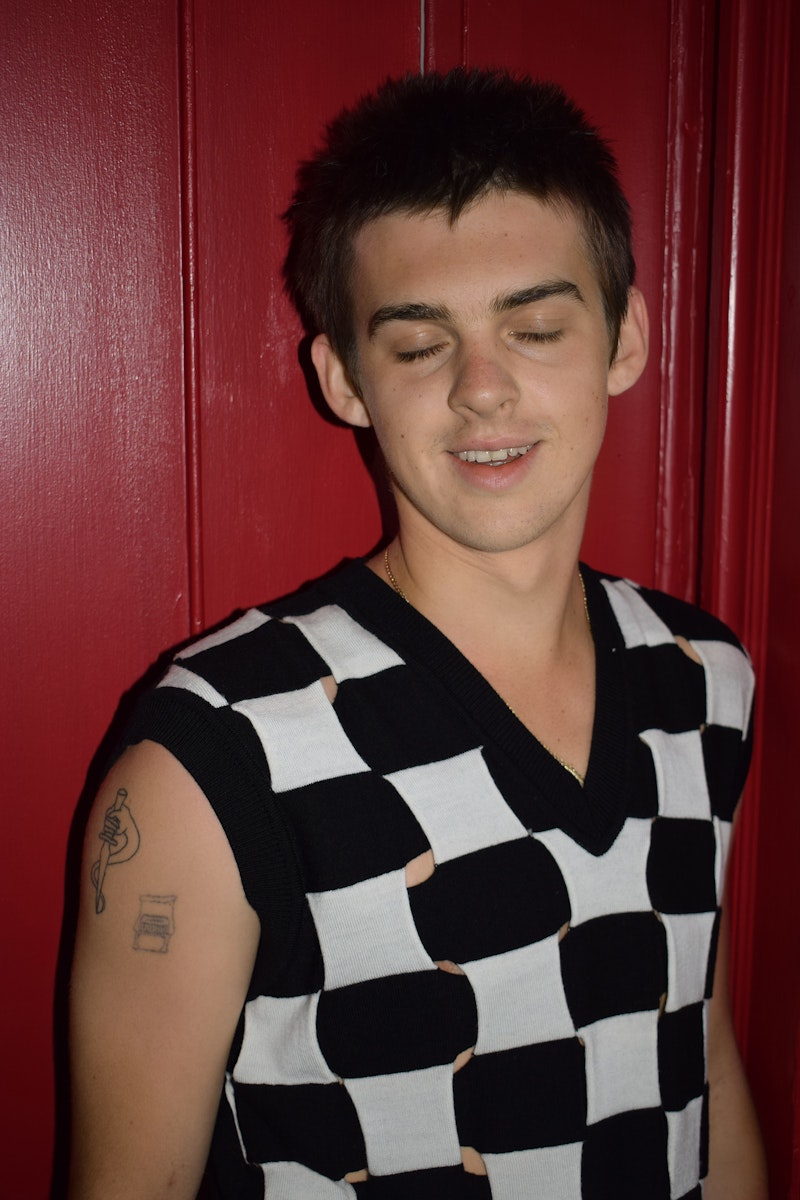 Do you have a favorite item of clothing?

Knitwear is my favorite thing. I have this jumper that I bought at Portobello Market a couple of years ago. I guess it’s made for a fairly large child. It’s this knitted scenery of a little farm. It’s been hand-knitted. It’s really tiny so when I wear it I just look like I’m in baby clothes. I think that’s potentially my favorite jumper, even though it doesn’t fit. Maybe I’ll frame it.

What’s going on with your Amazon show, Alex Rider?

It’s [out in] June and then Bagnold Summer comes out on the 8th June. I used to read those books as a kid and everyone needs to read them. And it’s just so surreal that I’m playing, like, a character that I read as a kid. It’s a teen action spy series. And it’s fun. And it’s full of cool, like, gadgets and stuff, great fight scenes. It’s one of those things I’ve always wanted to do, running around, spying on people.

Are you now doing the one for them, one for me system of choosing parts?

I’m not quite established enough to be doing the one for them, one for me. I just want another fucking role.

In this film, you’re kind of a rebel. I’m determined to get to the kernel of your youth and the horrible things you’ve done to upset your parents.

You literally walk out of my bedroom door and you’re on the street and right in front of you is this haunted pub called The Rock. It used to be on a rock back in the good old days by the sea. They used to bring the dead sailors that had been washed up on the shore, and they used it as a morgue. They put all the dead sailors in this pub and all in the back. It’s a creepy, haunted pub. It’s awesome. I used to sneak out to this little club called The Arch, maybe? I’m right on the seafront. So my friends used to come to mine after school and we’d stay at mine and then we’d sneak out and go to the club. There would be some awful drum’n’bass rave. There were like five of us. At six in the morning we’d go straight to the bus stop and then get the bus to school at seven. We used to do that every Thursday night for quite some time.

Did you ever get in trouble?

Never got caught. I hope [my parents] don’t read this interview!