One of my all-time favourite tunes is Arlo Guthrie’s 1967 hippy ballad The Motorcycle Song, aka The Significance of the Pickle.

If you believe the lyrics, it was written by the singer in the seconds between driving off a mountain and landing on a police car. The chorus is: ​“I don’t want a pickle, just want to ride on my motorcycle.” I used to sing that line around the house as a kid. I was not expecting to be reminded of it while raiding tombs in FromSoftware’s new video game Elden Ring.

There are no motorcycles in Elden Ring – the nearest you get is a conveniently fall-proof magic horse called Torrent – but there are pickles aplenty. As in Guthrie’s song, their significance remains… ambiguous, no thanks to the diseased imaginations of launch-day players.

“Pickle” is one of the new words in Elden Ring​’s messaging system, which lets you compose short phrases from sentence templates and a preset vocabulary. These messages – ranging from combat advice such as ​“strong foe ahead”, to elegiac soundbites such as ​“why is it always resignation?” – are etched into the geography and selectively piped into the worlds of other online players.

Similar systems appear in From’s previous Dark Souls titles. Now, as then, they transform desolate, hazardous environments into social spaces as populous (and obnoxious) as any Twitter feed. There are even equivalents for emotes in the shape of animated player phantoms. 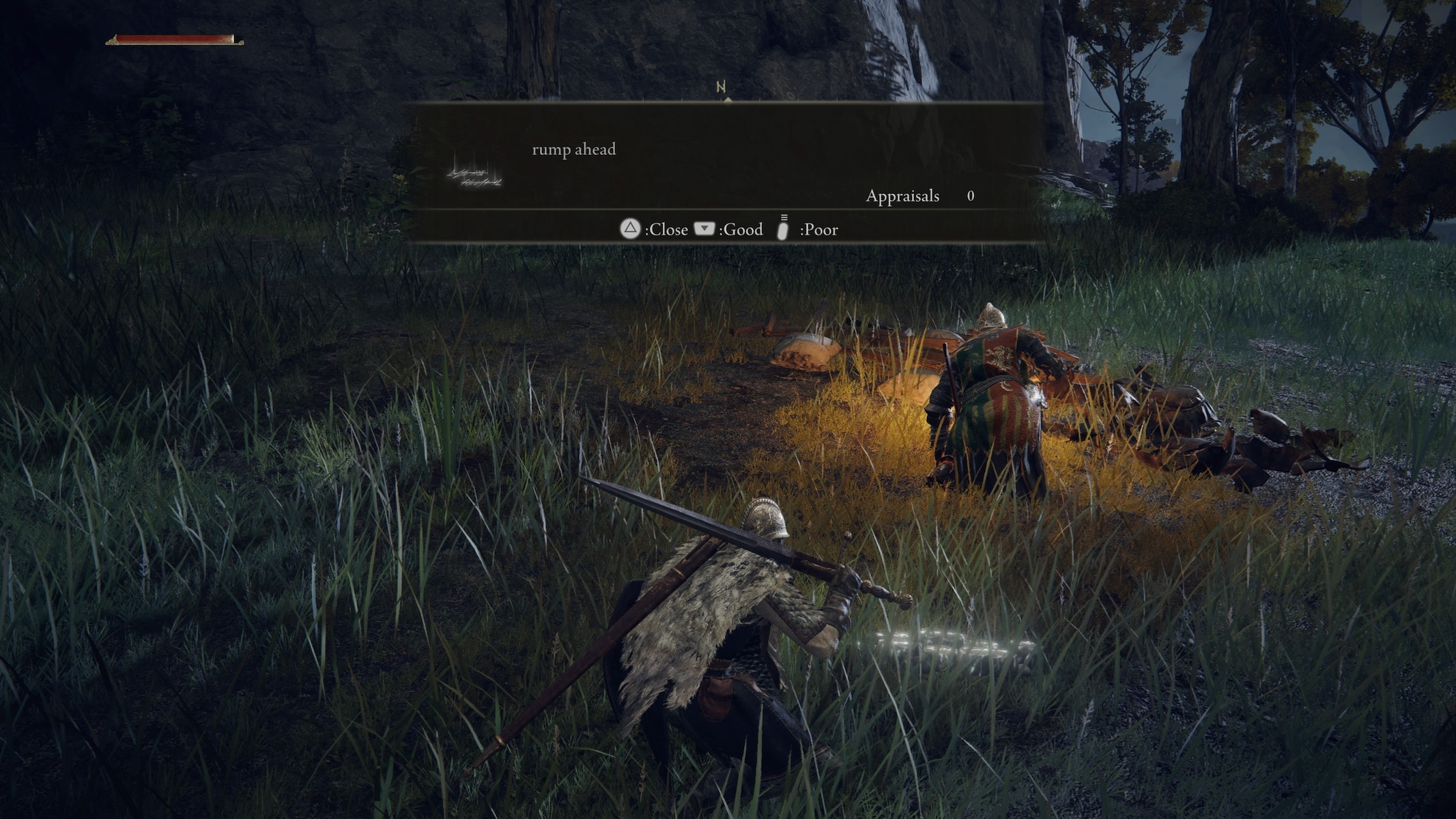 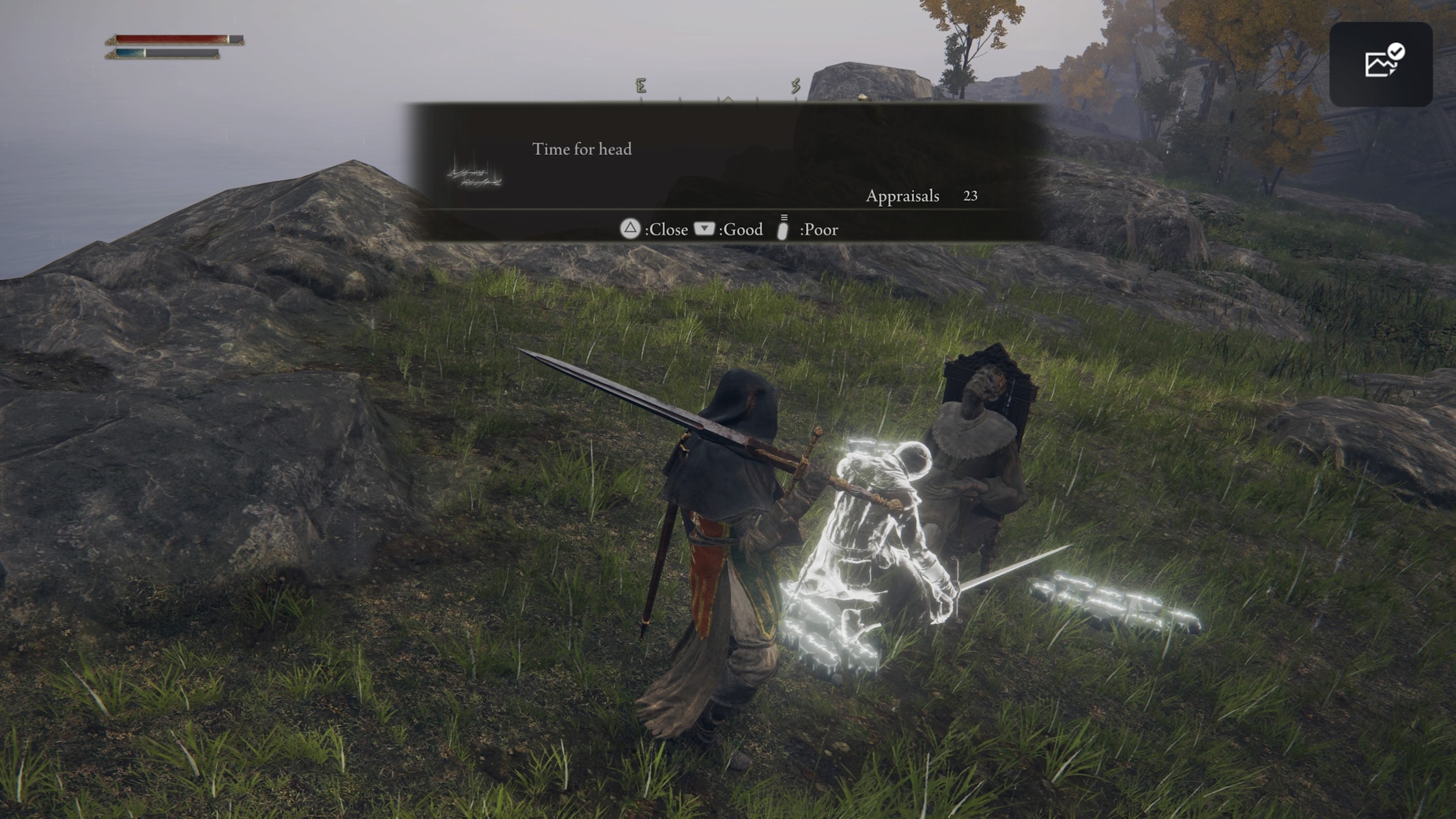 Unlike a generic chat service, however, From’s messaging systems are consistent with the universe of each game, their words and phrases drawn from the surrounding narrative. To leave graffiti is to become a kind of co-writer, adding to the lore by making use of its terminology. You can’t just scribble any old gibberish that might scupper the atmosphere.

Or at least, that’s the theory.

In practice, constraints like these are a temptation to see what you can get away with, and From’s notoriously punitive settings are crying out for a bit of bawdy comic relief. And pickles, shall we say, fit in nicely.

It began as I entered the opening cave area, with a terse instruction to ​“try pickle”. Later messages went into more specifics. ​“Offer but hole, seek pickle.” ​“Try pickle then seed.” ​“If only I had a giant… pickle.”

The variations are still multiplying as I explore the game’s autumnal Limgrave area, waiting to appal me at every corner. The applications of ​“pickle” are eye-rolling in themselves, and that’s before you stir in the carnal possibilities of companion terms like ​“secret passage”, ​“fat coinpurse” and, indeed, ​“Elden Ring”.

All of this is business as usual for returning Dark Souls players. Many Souls sex puns are as ancient and revered as the games themselves, stored in the amber chambers of the internet alongside ​“official” quotations such as ​“if only I could be so gloriously incandescent”.

Take the old reliable ​“amazing chest ahead” in the first Dark Souls, which I’m not sure I’ve ever seen used to indicate an actual treasure chest. You’ll generally find it outside the throne room of the buxom Gwynevere, Princess of Sunlight.

Elsewhere, tactical tips like ​“time for thrust attack” do not necessarily refer to swordplay. Interestingly (or, you might say, disappointingly), From has removed some of these phrases from Elden Ring, cleaning up the game’s act a little, even as it has stirred in obvious red flags like ​“rump”. It’s an open question how much the developer is deliberately provoking these responses, building up a bit of sexual tension with its playerbase, even as it weaves grimly unromantic stories about corrupted gods and undead curses.

Mind you, the sex puns aren’t entirely against the grain. Sex is secretly everywhere in the writing of From’s work, even or perhaps especially at its ugliest: 2015’s Bloodborne is a giant, squelching sackful of Freudian metaphors. Making sense of each Souls game’s wider mythology is often about determining who banged who from scraps of gossip attached to item descriptions.

Player-written innuendo complements this, though there’s a difference, of course, between tracing the parentage of a sad dragon lady and writing ​“visions of rump” behind a shopkeeper.

To be clear: not every Elden Ring pickle-lover is in it for the dick jokes. Some clearly enjoy the word for its incongruity, labelling everything a pickle, from candelabras to castles. Others appear to be engaged in a search for literal pickles (the word is listed under ​“Concepts” on the messaging screen). Consumable items include pickled turtle necks, but there’s no sign so far of the iconic brine-soaked cucumber.

“Pickle?” asks one message plaintively next to a crate of what looks like potatoes. ​“Behold, pickle!” declares another, apparently in reference to a mule. As whimsical as these remarks seem, they could well be the basis for an extended fan conspiracy.

As things stand, they’re a welcome change of tone after getting your arse kicked by a dragon.

The first Souls game came out in 2009. Will players still be talking about and toying with the saucier wording of Elden Ring in 13 years’ time? It seems all but guaranteed, given rapturous early responses.

And, frankly, this kind of silliness is what I play for nowadays. I have sunk many hundreds of hours into FromSoftware games, putting down every type of monster, hauling myself back from crushing defeat again and again. My appetite for the still-excellent combat has dulled, but I will always enjoy the sprawling mythologies these games cultivate, and the way players warp them out of shape.

To sum up in Elden Ring terms: ​“Praise the pickle! And then try two-handing.”