The biggest misconception about the acid house era is that it was all about drugs. Or so Turner Prize-winning artist Jeremy Deller tells me over the phone when discussing his documentary Everybody in the Place: an Incomplete History of Britain 1984 – 1992 – commissioned by Frieze last year and airing on BBC4 for the first time tomorrow night. ​“For some people [drugs] were a big part of it,” he explains. ​“But actually for a lot of people it was about the music. It was about being around other people who were listening to the music at the same time. It was the communal spirit of it all.”

Acid house became the biggest youth movement that the UK had seen in decades – and would remain unrivalled for decades afterwards as an expression of effervescent, joyful rebellion. It was a movement that united a generation reacting to the political climate in Britain. One that terrified politicians, parents and the police. One that saw droves of sweaty, smiley, mobile party-goers pile into cars before speeding around London’s orbital motorway – making friends for life in service stations – in search of raves that went by the name of World Dance (Junction 6 off the M25), Sunrise and – the aptly named – Orbital.

It was as much about the music as it was about social change and solidarity; it was two fingers-up to Margaret Thatcher who in 1987 declared that there was ​“no such thing as society”. Here was a society unlike any other the nation had seen before. And they were ​“mad for it.”

Just as the Saatchi Gallery’s current rave exhibition Sweet Harmony is intended to capture a feeling not to act as a history lesson to today’s youth, Everybody in the Place sets out to upturn popular notions of rave and acid house by looking at the seismic social changes – from the warehouse raves to the protest movements – that shaped and reshaped Britain in the 1980s. In the documentary, Deller joins an A‑level politics class so that pupils can discover the story of acid house – from its birth in the underground gay clubs of Chicago, to the way it changed British society in the 1990s. 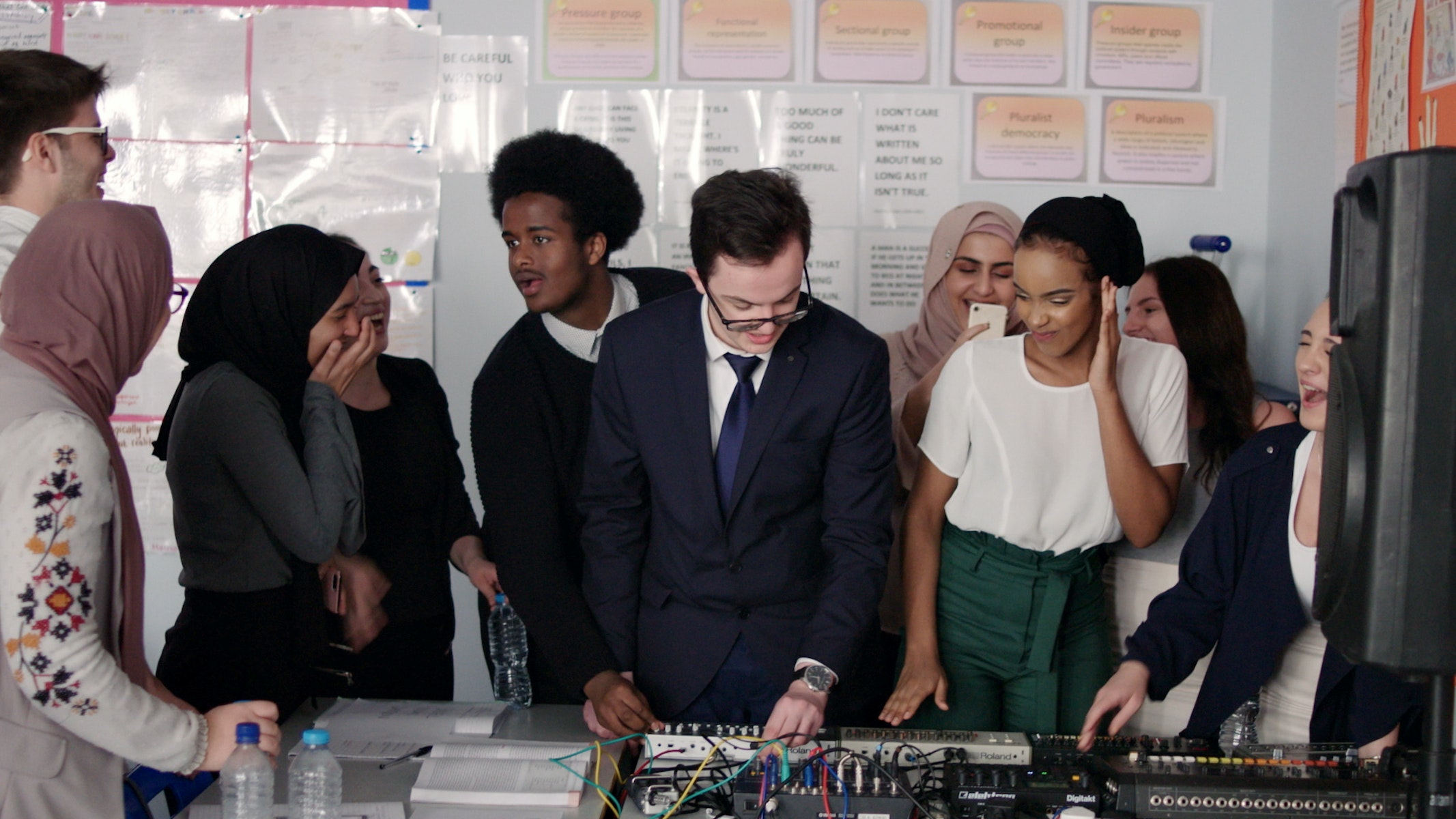 What was it that ignited this project?

Did you learn anything unexpected in the process?

That the gay roots in house music are really fundamental to the story. The interesting thing about acid house was the broad spectrum of people [that it involved]. In America it was very defined, initially. So that was interesting, the way it started and the way it was picked up in Britain and expanded to everyone. It was a movement that was very much for everybody.

How do you think the political climate in Everybody in the Place compares to the climate right now?

Well, I think in as much as it was Conservative – the Conservatives had been in power for seven or eight years. I mean, we’re getting to that point now with a very unpopular leader. A lot of people really don’t like him, they know what kind of person he is. He’s the kind of person that represents the past to them, the kind of older person who has views that go against the progressive way in which people are starting to move and think. They’re also really unhappy about Europe. I think young people are really angry, and I think it’s definitely going to feed into the music. I mean, it already has. It is strangely similar even though the music in some ways is very different. It’s full of lyrical content, whereas acid house was often more instrumental. The cleverness of the lyrics and the skill in the lyricism. There was none of that.

You presented the rave seminar in a school, how was it received by the pupils?

Yeah I went to it.

There wasn’t a single phone in sight. It was amazing. People were going berserk, but I don’t know what people do at Skepta’s gigs normally.

They go berserk, but there are phones.

He had a very elaborate set with elaborate staging – a kind of scaffolded pyramid with projections. It was very sci-fi. People were just totally in the moment. I’m not sure if people were doing drugs though. My theory is that now people probably do a drug once, and then they remember what it was like when they go out and replicate that feeling. It was as if you needed the drug in the ​‘80s. The reason there’s not really much talk of drugs in the film is because you can’t talk about them you have to be very careful about how you discuss that subject when you’re in a school. The head teacher said to me, ​“If you say anything at all that promotes the taking of drugs, I’ll have to stop the lessons.”

So I thought, right I won’t mention them at all – well, I mentioned them once. You can make a film about this subject without mentioning drugs. I wanted to make a film that took a step back from the usual narrative and saw this quite brief period of time in a historical continuum. It’s basically a step back to see what else happened before and around it to try and explain why it happened. There were other reasons why it happened, social and political reasons that explain why it was so loved and adopted by young people.

How do you think it compares to the Extinction Rebellion protests?

There is a lineage. You can draw the line from rave movement to Reclaim the Streets. But it’s absolutely for a different reason. Reclaim the Streets happened in the late ​‘90s and that was almost like a traveller movement. Extinction Rebellion is a bit more urgent now. It’s less party focussed and much more about the politics and the issues.

What do you want people to feel when they watch this on Friday?

I don’t know really. I hope they see the story of this moment and the other things that were going on around it and maybe look at popular music in a different way. If you’re not into the music, you can still appreciate the film. And it might help you understand the music better. But I also wanted to make a film through the eyes of the young people in the room. I want people to think about them as much as the footage. So that when you’re looking at footage of some party or rave, you’re thinking about what they were thinking [about]. I want you to be aware of that generation looking at this, as well as yourself. So that you’re thinking of them all the time.

People always talk about the hedonism of the era, what’s your take on hedonism today?

I think it’s necessary. It’s not an end in itself. Hedonism all the time is oblivion, which you don’t want. I think it’s necessary to lose yourself. But you can lose yourself in so many different ways, through art, through music… You can be hedonistic in so many different ways. I think it’s a young person’s self-discovery, to be hedonistic. Now it’s very formalised, you go to Glastonbury, you don’t organically discover it, the experience is laid out for you. It’s ground you have to cross into adulthood.

What are you working on at the moment?

I’m editing a film about what’s been going on in Parliament Square this year. I visited Parliament Square between January and March this year to talk to people who are pro and anti-Brexit – I was more interested in the people who were pro-Brexit – and filmed what was going on. It’s a film looking at the pavement-level discussion of what was going on.

It’s going to be shown in Austria in September and then I’ll probably show it somewhere in London.

Did you go to the anti-Boris march last week?

Yes I did. It was great, actually. Brilliant. It was a great atmosphere, great music, once again, music helping to fuel it. It’s the first of many though, isn’t it. It’s great ​‘cos he’s someone who just wants to be loved by everyone, especially young people. So to immediately have 5,000 people screaming down Downing St was brilliant.

BBC Arts’ Everybody in The Place: An Incomplete History of Britain 1984 – 1992 by Jeremy Deller will air on BBC Four on Friday 2nd August at 22:35 and will be available on BBC iPlayer for 30 days.