Video game comedy is a surprisingly crowded field, offering something for everyone. Like Shakespearean banter? Try Astrologaster. Fan of Dirk Gently? Give Disco Elysium a whirl. The smartest video game comedy I’ve played is Valve’s Portal, with its lab rat puzzles and petulant AI nemesis, but if we’re talking about the game with the funniest firefights, look no further than Insomniac Games’s Ratchet & Clank: Rift Apart.

Ratchet & Clank, which initially launched in 2002 on the PlayStation 2, is a sci-fi action series starring a wrench-wielding ​“Lombax” and his genteel robot acquaintance. It’s always been a humorous affair, built around some very silly guns that grow even sillier with upgrades, but this instalment really goes for the jugular: it’s equal parts Marvel blockbuster and Marx brothers. As Rift Apart begins, the duo have been whisked away by old foe Dr Nefarious to an alternate universe where he always wins. Here, they team up with Rivet, Ratchet’s inter-dimensional double, and set off to quash Nefarious and piece the fabric of spacetime back together.

The game’s 10-hour story is spread across various planets, each a miniature open world with a handful of secret areas and sidequests to dig into on revisit. It’s an extremely handsome creation, and a sweet little tale about trust and friendship – Rivet, who you’ll control half the time, never found a robot buddy of her own. The real hook, however, is blowing things up.

Video games are too in love with combat, but in Ratchet & Clank, combat is a clown show. You’re surrounded by angry triffids, but half have been turned into hedges by a weaponised lawn-sprinkler, and the rest are busy with your friend Mr Fungi, a depressed mushroom who yells, ​“THE FUN NEVER STOPS” as he pelts targets with plasma. There’s a freeze cannon that sends attackers sliding into each other, and a rocket-powered drill that thinks it’s a dog.

The enemies are just as daft, with dozens of wonderfully voiced dialogue lines lending a party atmosphere to even the most frenzied encounter. There are robot enforcers who sound like summer camp leaders (“Whoa! Taking out the Emperor’s appointed fists of justice is NOT OKAY”) and pirates who insist on talking in rhyme.

The humour might seem cringe on paper, and individual joke weapons or characters do fall flat. But Rift Apart​’s trick is that you rarely experience any gag by itself. They usually arrive in a mob, with punchlines and pratfalls interrupting and amplifying each other – the rocket drill yapping ecstatically as giant pinballs bounce from head to head and electrocuted ​“GOON-4-LESS” mercenaries break into a wobbly chorus.

There’s also an earnest splendour to the game that keeps the comedy from overreaching itself. Even at their quietest, each area is a festival of moving parts and incidental flourishes – droids arm-wrestling in bars, holographic statues, and cyberpunk skies that teem with starships. It’s this element of bustle, rather than the lovely, edge-lit models or hi-fi bubblegum palette, that really distinguishes Ratchet on PS5 from predecessors on PS4 and before. Sometimes you get two levels in one: Rift Apart’s big hardware-selling gimmick is that you can switch dimensions by lassoing cracks in reality, loading up a whole new set of level assets in a fraction of a second. 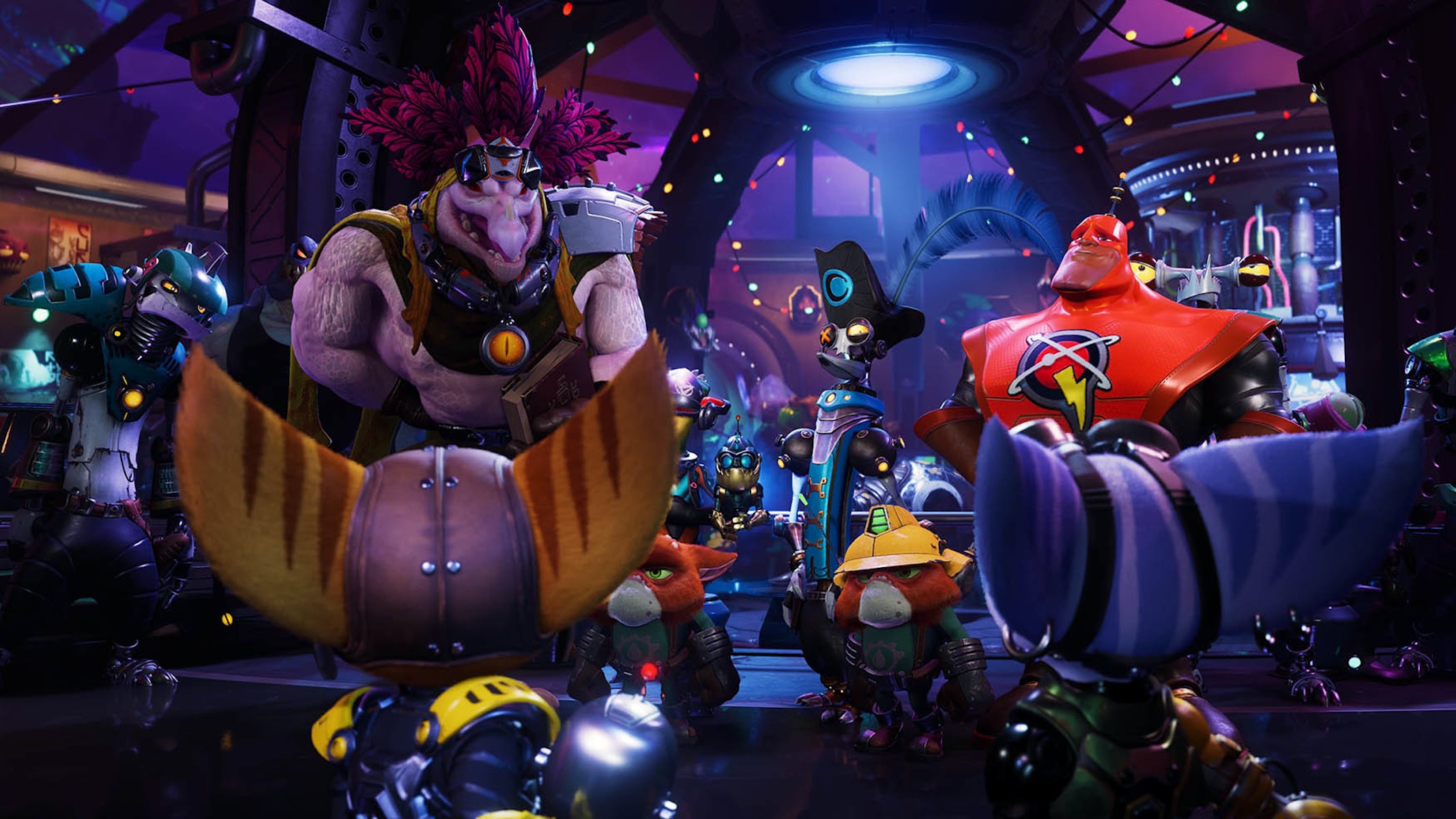 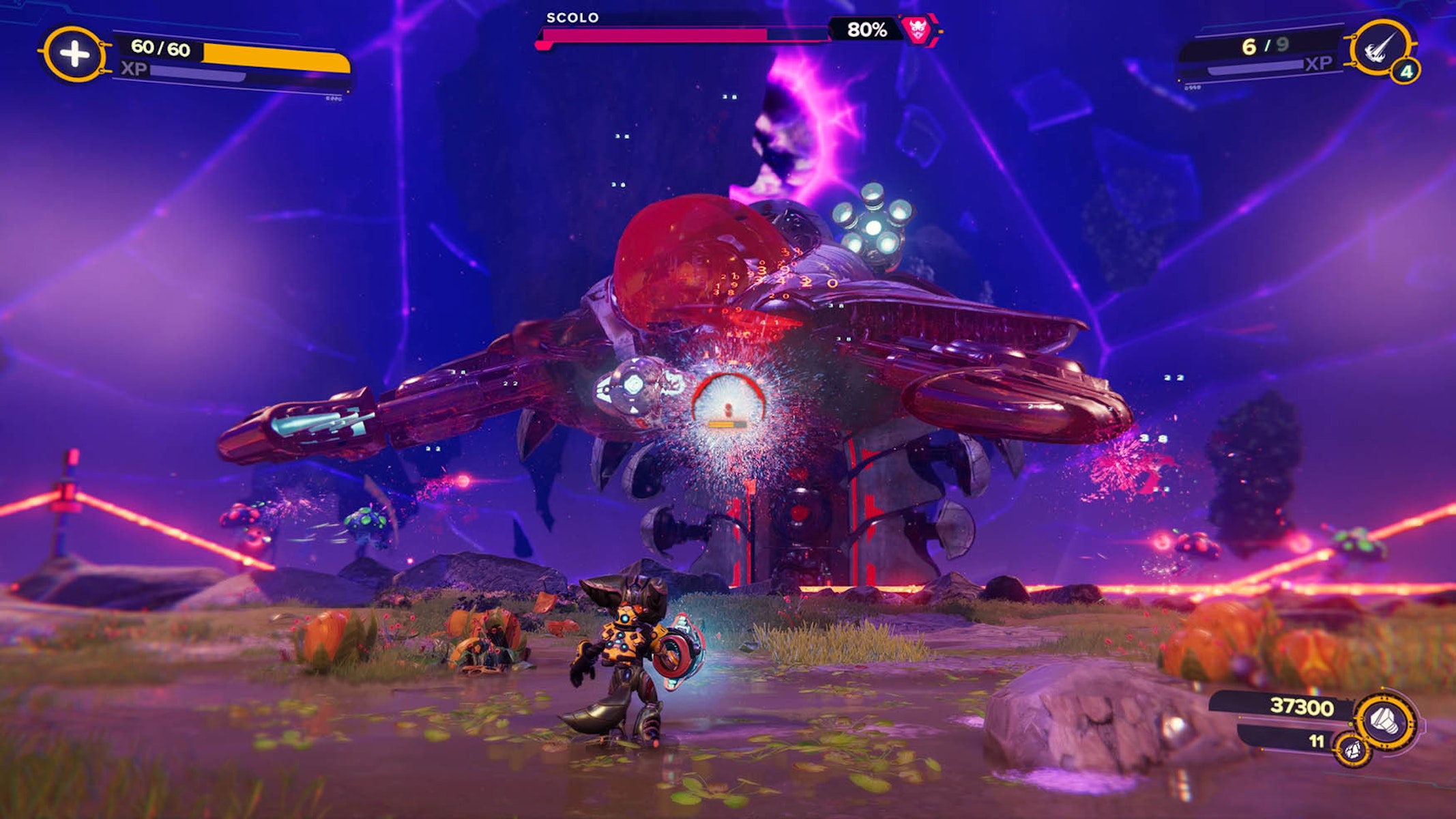 This isn’t always as breathtaking as it sounds: many of these portals lead to glorified challenge rooms, where you complete floating obstacle courses to unlock costumes and bonuses. But there are grander setpieces, too: an asteroid mine you can visit before and after its destruction, and rollercoaster getaways that zip you through three or more dimensions in one fell swoop.

At a time when most big-budget video games have taken a turn for the dour, Ratchet & Clank: Rift Apart’s mischief is infectious. Forget enemy soldiers – the real threat here is an attack of the giggles.

Rachet and Clank: Rift Apart is out 11th June.