With works from artists all over the UK like Cumbria, Glasgow, Bradford and London, Raising Boys presents masculinity from different walks of life, with a mixed-bag of multimedia artists like Peter Doyle, Benjamin Murphy, Zoe Foster and Conor Murgatroyd.

While Forster’s moving portraits capture the forgotten workers of industrial towns along the northwest, Murphy takes to a raw canvas with charcoal to explore polarity, time and memory with a particular focus on young men and their struggles. Alongside his artwork, Murphy lectures at the University of the Arts London. Glasgow-based artist Engel also explores masculinity, with a particular focus on the body. His sombre male characters come to life with paintings that morph into sculptures.

Doyle and Murgatroyd, who have recently collaborated on an exhibition, reimagine the banality of everyday life. Whether surrealist paintings featuring a man playing pool or a father and newborn’s embrace, they are reminders that these struggles often don’t reflect in grandiose moments. They lie within ordinary people in ordinary moments.

While we have made forward strides in gender expression and the fight against arbitrary roles, the binaries of gender continue to be a point of inner turmoil. 4,912 suicides were registered in 2020, with men aged 45 – 49 continuing to have the highest suicide rate in the UK. These disproportions don’t end here, as the North East of England had the highest suicide rates in 2020, seeing an increase of 15.7 per cent compared to the previous year.

While these problems won’t go away until structural measures, such as increased funding into underdeveloped communities, are put into place, artists like the ones featured in Raising Boys help continue the all-important conversation. Ahead of the exhibition, we spoke to Peter Doyle, Benjamin Murphy and Leon Scott-Engel on mental health, speaking to their younger selves, and advice for young people attempting to break into the art world. 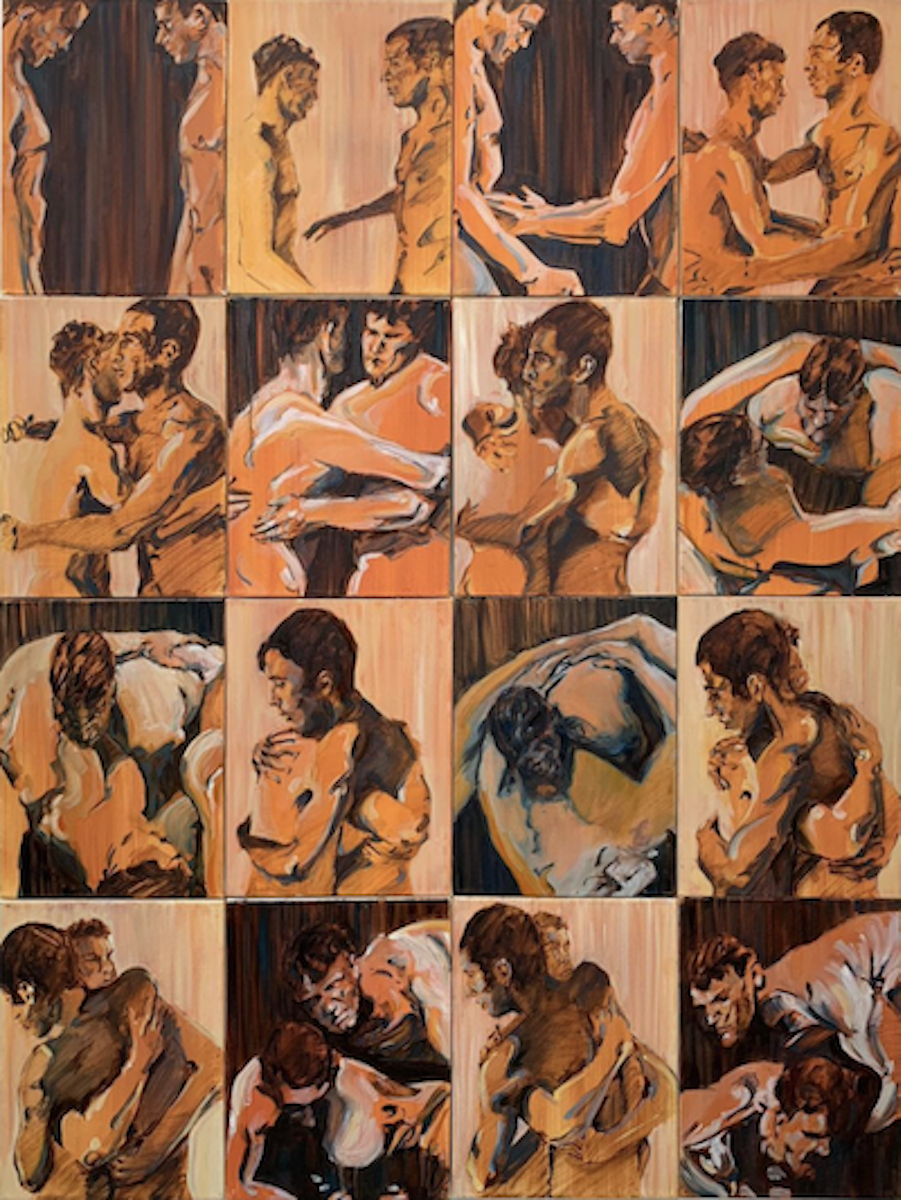 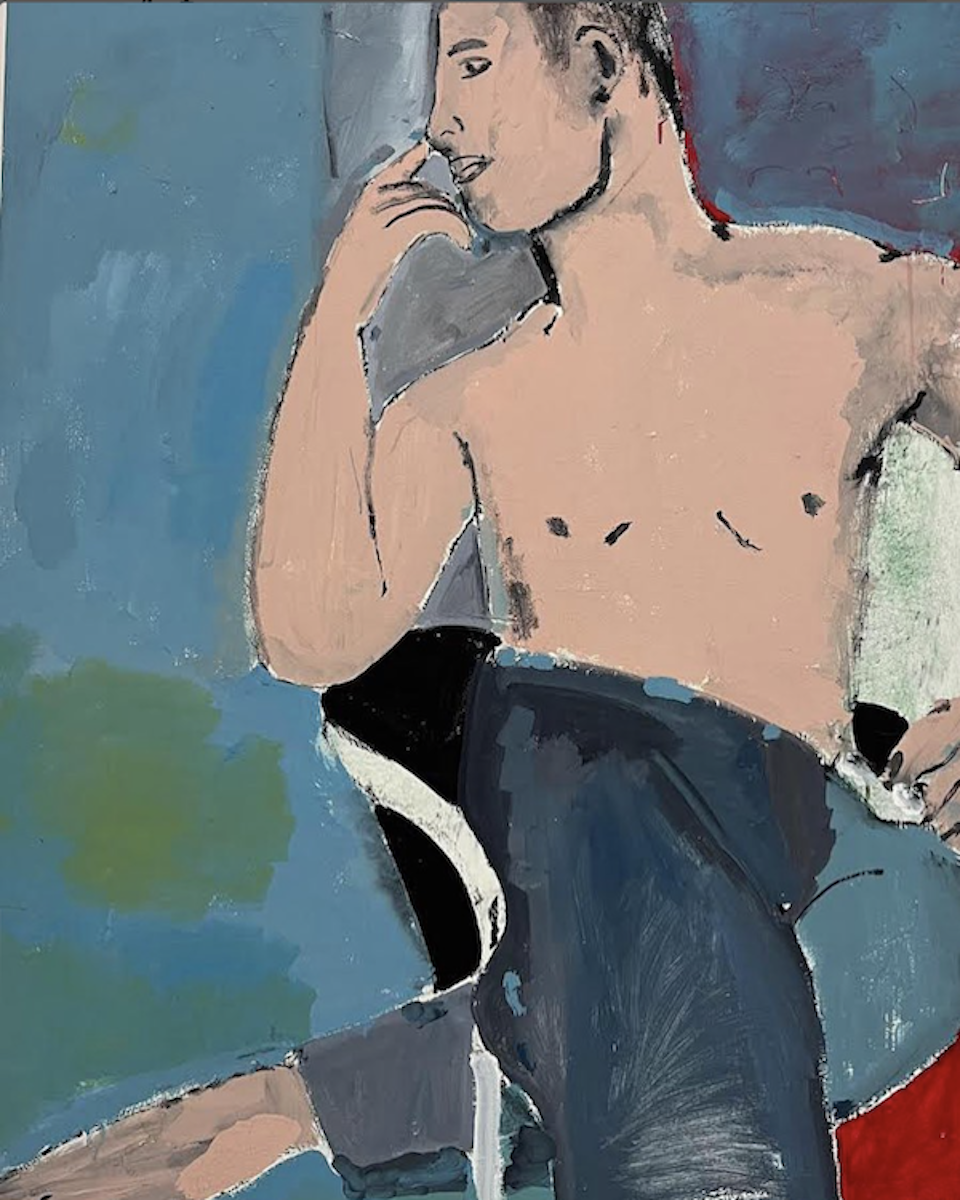 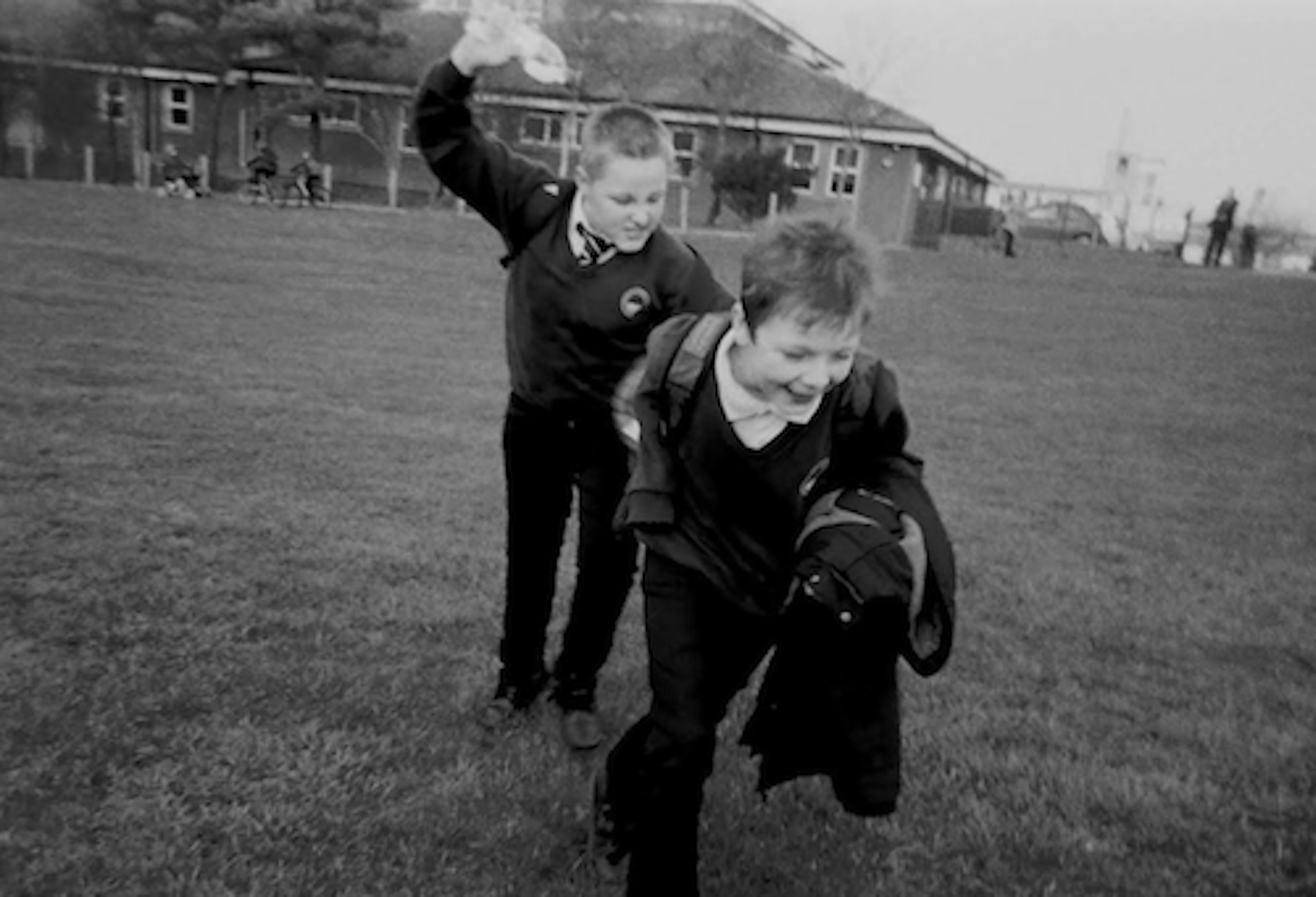 Do you think men’s mental health is explored enough in art and media?

Benjamin: It definitely is being explored, and I think now more than ever. Whether or not it’s enough, I’m less sure of.

Leon: There’s been a shift in the way we communicate on issues surrounding men’s mental health. But there’s still stereotypes and binary definitions. We need the mainstream to break away from this idea that masculinity and machoism are intertwined; something that’s begun to trickle through from the arts.

Peter: I think it is explored. I guess it comes in different ways and may or may not be very direct and obvious. Saying that, I would like to explore the subject more myself.

If you could go back and give your younger self a piece of advice, what would it be?

Benjamin: Chill a bit and don’t try so hard. Also, party a little less and work a little more.

Leon: That it’s okay to feel vulnerable, to break it down. Shatter that facade and open up to those close to you. As I’ve matured, I’ve realised the importance of sharing your vulnerability, that we all have it.

Peter: I was always anxious when I was younger and a bit afraid to try new things or be myself. I just wish I knew that everyone had their own shit going on. That would have made being open a lot easier!

Do your teenage years influence the work you make now?

Benjamin: I’ve very recently been diagnosed with ADHD, and that explains a whole lot about my teenage years. In retrospect, I think I can attribute my whole career to that now, as I would have floundered in a more conventional 9 – 5 working environment. I wouldn’t have been able to handle it, and so I found ways of avoiding it.

Leon: My work centres around the personal, insular experience of self. Much of this has compounded through adolescence, so it certainly breaks through. You have expectations of what it is to be a man in adolescence. I make work, in part, to understand myself, and break the image we’re fed of what we are ​“meant” to be.

Peter: I didn’t have many troubles. Just personal insecurities that I didn’t really understand – my work is personal but doesn’t reflect my past, really. 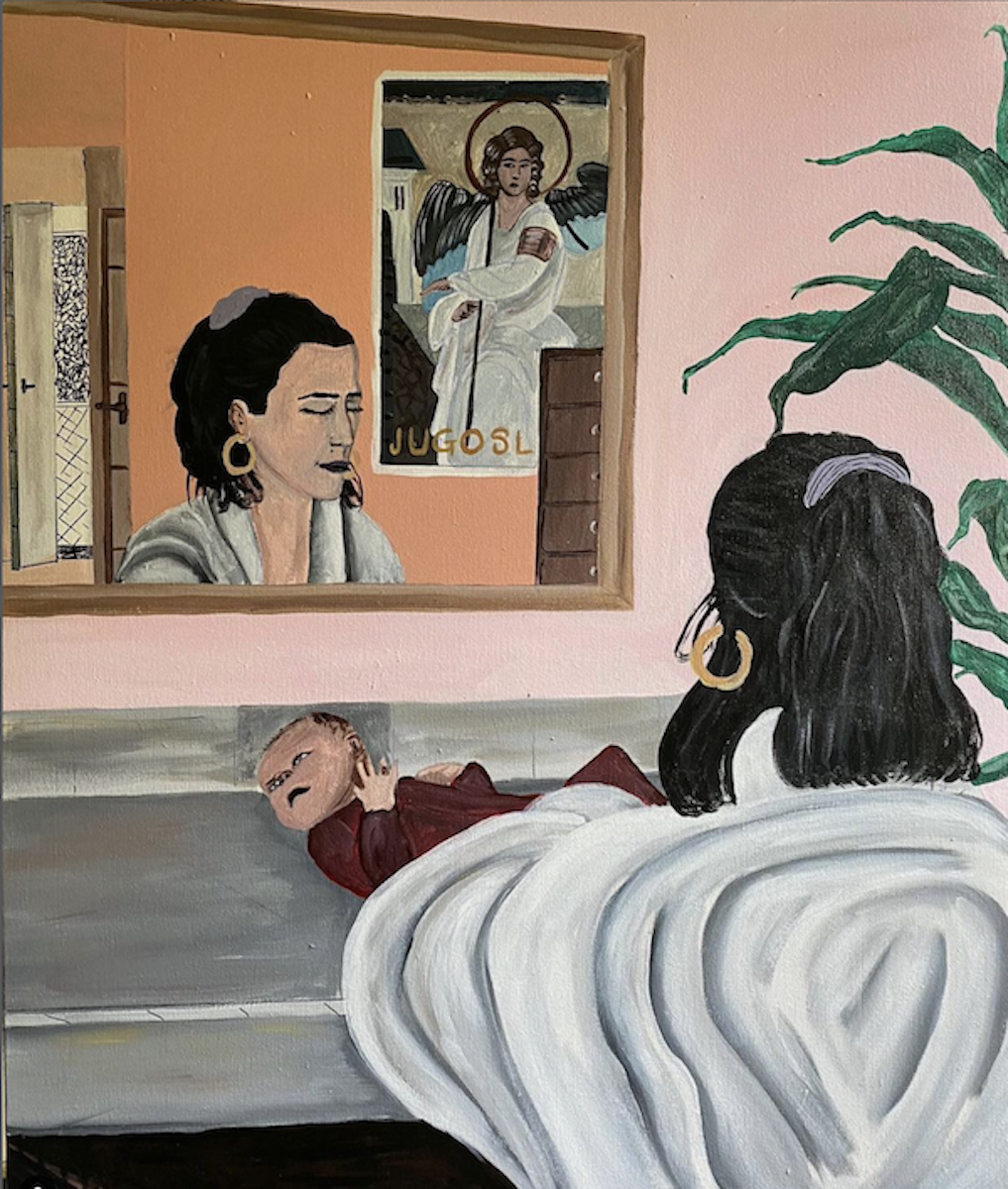 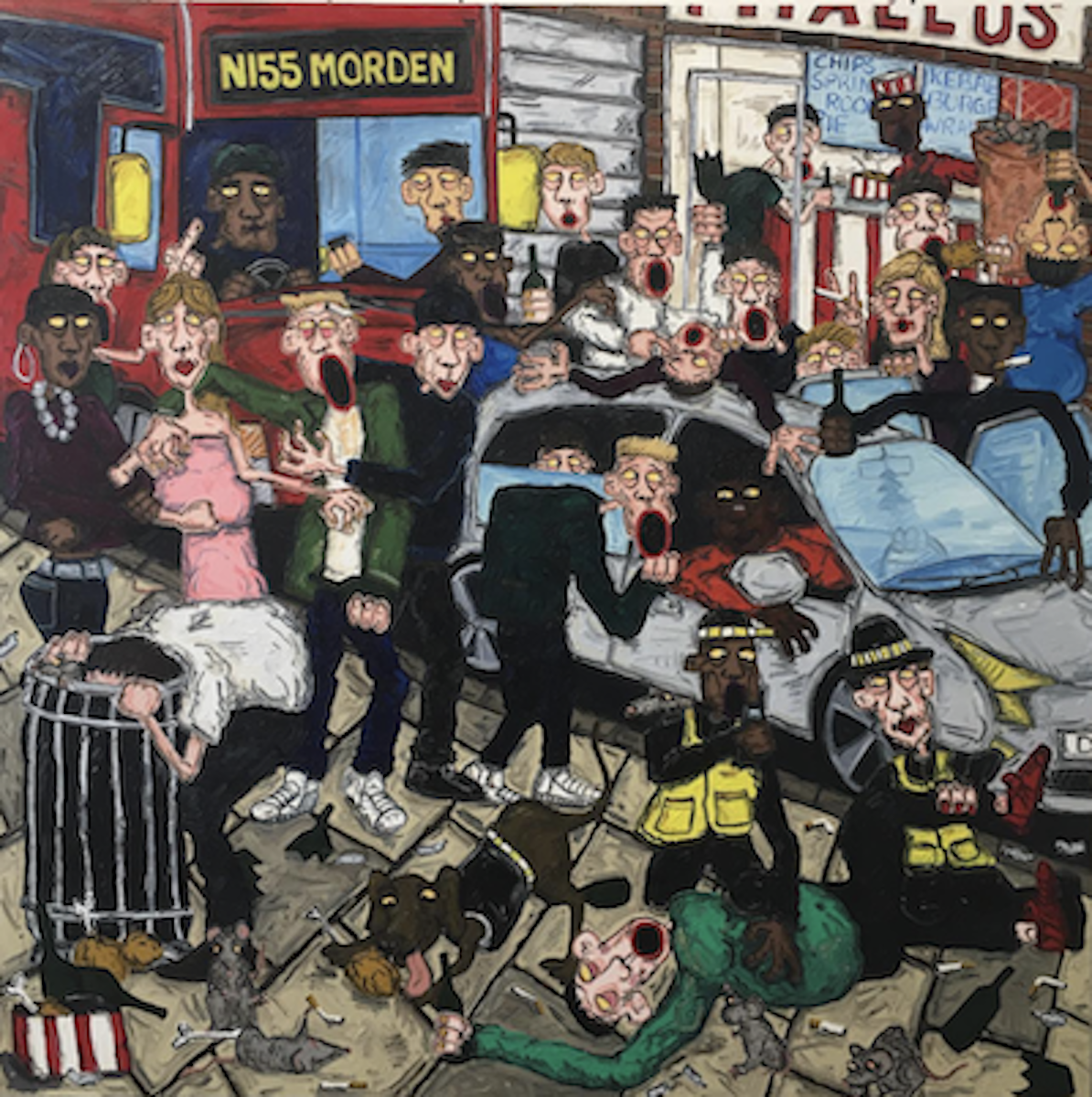 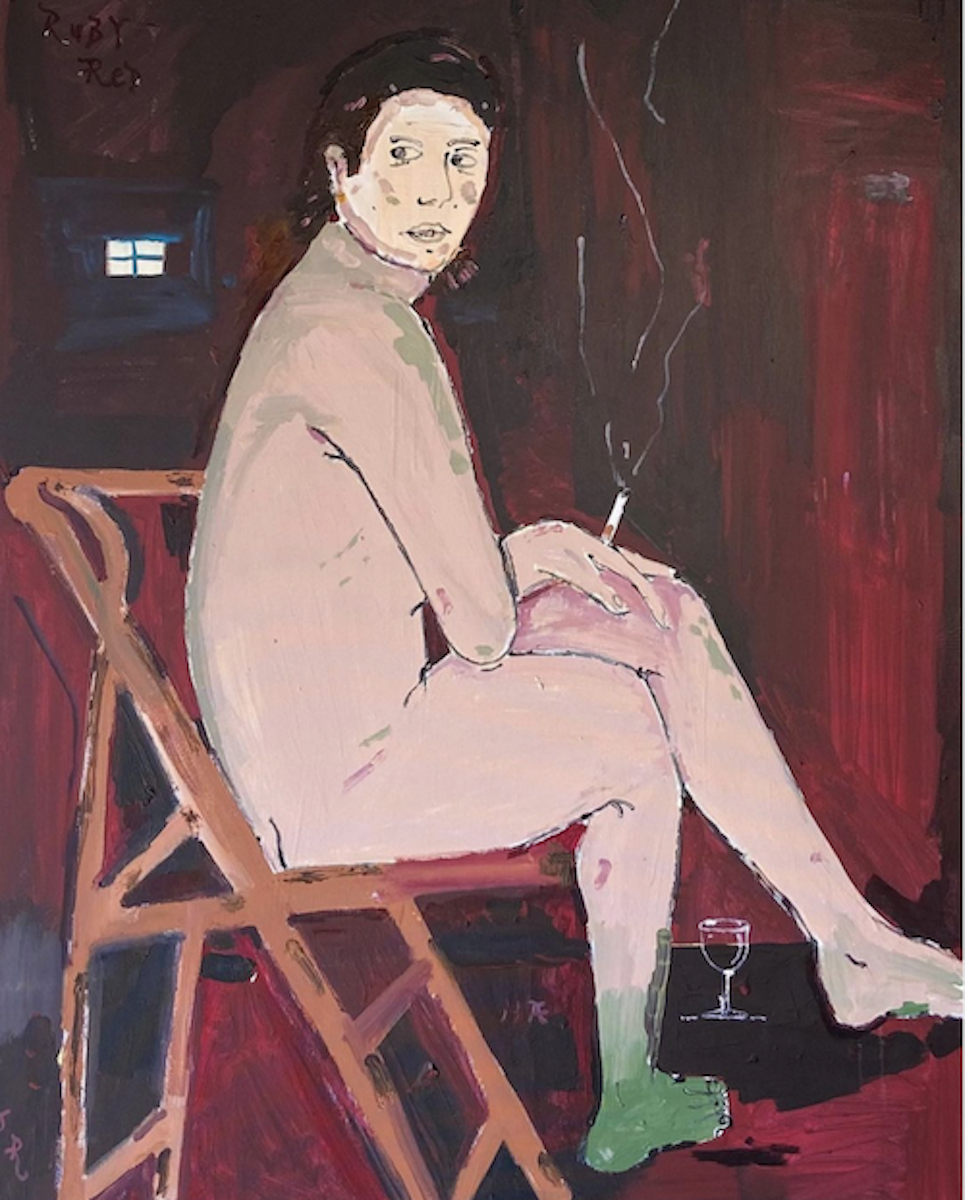 Do you feel like things are changing for the better, or are teenage boys still held to rudimentary definitions of masculinity?

Benjamin: Things are moving in the right direction I think, yeah. Social media has played a large part in that, and more diverse representation in films and TV has helped, too. I’m sure there’s still a lot more to do, though.

Peter: Well, young people are growing up much quicker, which makes life a bit tough and harder to find what you really like. I am just very happy I grew up when I did. Things now are a bit mad.

What advice would you give to young people going into art?

Benjamin: Don’t compare yourself to your contemporaries. Everyone’s career and work develop at a different rate and expecting yours to progress in the same way as other people is only going to make you feel bad. Be more open to criticism and less afraid of failure. Always be easy to work with, and constantly try to push your work forwards; don’t allow yourself to get comfortable.

Leon: That it takes time, both in making but also in understanding yourself so you can be sincere in what you produce. This goes for any young person looking toward the arts.

Peter: Hmm, I guess to just paint what you like. Don’t worry too much about working with a gallery straight away or being in shows. Don’t be too hard on yourself if you can’t get out what you see in your head. Lots of practice and just seeing it and being around it. You’ve gotta have thick skin in any line of work that you’re showing to the public. Find what works for you. At the end of the day, it’s all a bit of fun.