It’s hard to get your head around Housemarque’s new PlayStation 5 exclusive Returnal, but you could summarise it as a tortured conversation between a woman and a planet. The woman is Selene, a deep space explorer (vigorously voiced by Jane Perry with facial capture from Anne Beyer) who crashlands on the world of Atropos while investigating a mysterious signal.

The premise recalls Alien and Prometheus, as does this once-civilised world’s geography and architecture. Its crevices teem with hostile fauna, from ancient robots to colossal flying cthuloids that belch homing golden shards. Fortunately, Selene is a capable fighter – Alien​’s Ellen Ripley with a dash of Samus Aran, star of Nintendo’s venerated Metroid series. She’s equipped with a power suit that allows her to boost-jump and phase through hazards, blinking out and reappearing in a crackle of electricity.

Among the first things Selene discovers is that she’s been here before, more times than she’s comfortable imagining. The environment is littered with the broken bodies of her clones, some of which accompany audio logs ranging from terse scientific speculations to poetically deranged ranting. Death, it transpires, offers no escape from Atropos. Instead, it triggers a blur of dream imagery: sunlit fields, surging water, clutching tentacles. Then, Selene gasps awake back at the crash site, stripped of everything she’s acquired, save a few special items that have fused with her suit.

The planet, too, is born again when she dies, its halls and arenas reshuffled, with different threats and treasures to uncover. It’s not a complete reset: individual spaces are grouped into biomes and the portals that link them stay open once you defeat the larger, more terrible creatures that defend them. But it’s a traumatic cycle all the same, thrusting you back to the beginning to lick your wounds and venture forth once again.

Returnal​’s reviving and remixing – a hallmark of the ​“roguelike” genre, recently popularised by Supergiant’s Hades – is also an act of intermixing that recalls the body-horror of New Weird fables like Jeff Vandemeer’s Annihilation. To survive her journey to the signal’s source, Selene must incorporate bits of Atropos into her suit, using droplets of indigenous fungus to patch up damage. Apart from her starting sidearm, the weapons are all locally grown, albeit based on archetypes familiar from other shooters.

The suit can also process artefacts into upgrades, such as a defensive shockwave that triggers when you’re struck. More problematically, there are objects coated in a curious ​“Malignancy” that may cause your suit to malfunction, and parasites that have both pros and cons – automatic self-healing undermined by smaller gains from healing items, for example. Deciding whether to use these items is one of Returnal​’s big gambles. A suit malfunction at the wrong time may spell doom.

As Selene becomes more a part of Atropos, the world in turn begins to resemble her, manifesting objects from her life on Earth. Among these is Selene’s old house, a rotted clapboard structure eerily relocated to a jungle grotto. Entering it switches the view to first-person and plunges you into memories that are more repellent than anything in the wilderness outside. The more you visit the house, the more you will understand both Selene and Atropos. The planet is, to some degree, just a rippling mirror for the anguish beneath the character’s brusque demeanour.

Returnal is also something of a journey into the past for its creator, Housemarque. Founded in 1995, the studio remains best known for arcade shoot ​‘em ups like Super Stardust and Resogun, in which players guide a tiny ship or character through intricately patterned blizzards of bullets. ​“Shmups” have a fierce following, but a relatively small one. Faced with declining sales, Housemarque sorrowfully declared the genre ​“dead” in 2017. But it’s spectre endures in Returnal​’s combat, which blends the agility of 2016’s DOOM with a lightshow reminiscent of arcade’s heyday.

It makes for a modern yet vintage-feeling shooter, as beautiful as it is lethal. There’s no clean line between attack and evasion. You must plot a frantic course through clusters of glowing projectiles and expanding rings of energy, while dishing out damage yourself. And while the game looks gorgeous, it sounds and feels even better. A weapon’s secondary fire mode recharge is marked by a spiralling whine through your PS5 controller speaker, and there are intricate rumble effects for both combat and atmospheric touches like rainfall.

The battles are gripping enough to make up for the frustration inherent to a game with a strong element of randomisation. The real incentive to keep going, however, is the narrative. Judged purely as a collection of abilities and hazards, Returnal isn’t the most outlandish or accomplished roguelike on offer, but it stands out for how the reshuffling of props supports a wonderful, planet-wide mystery. 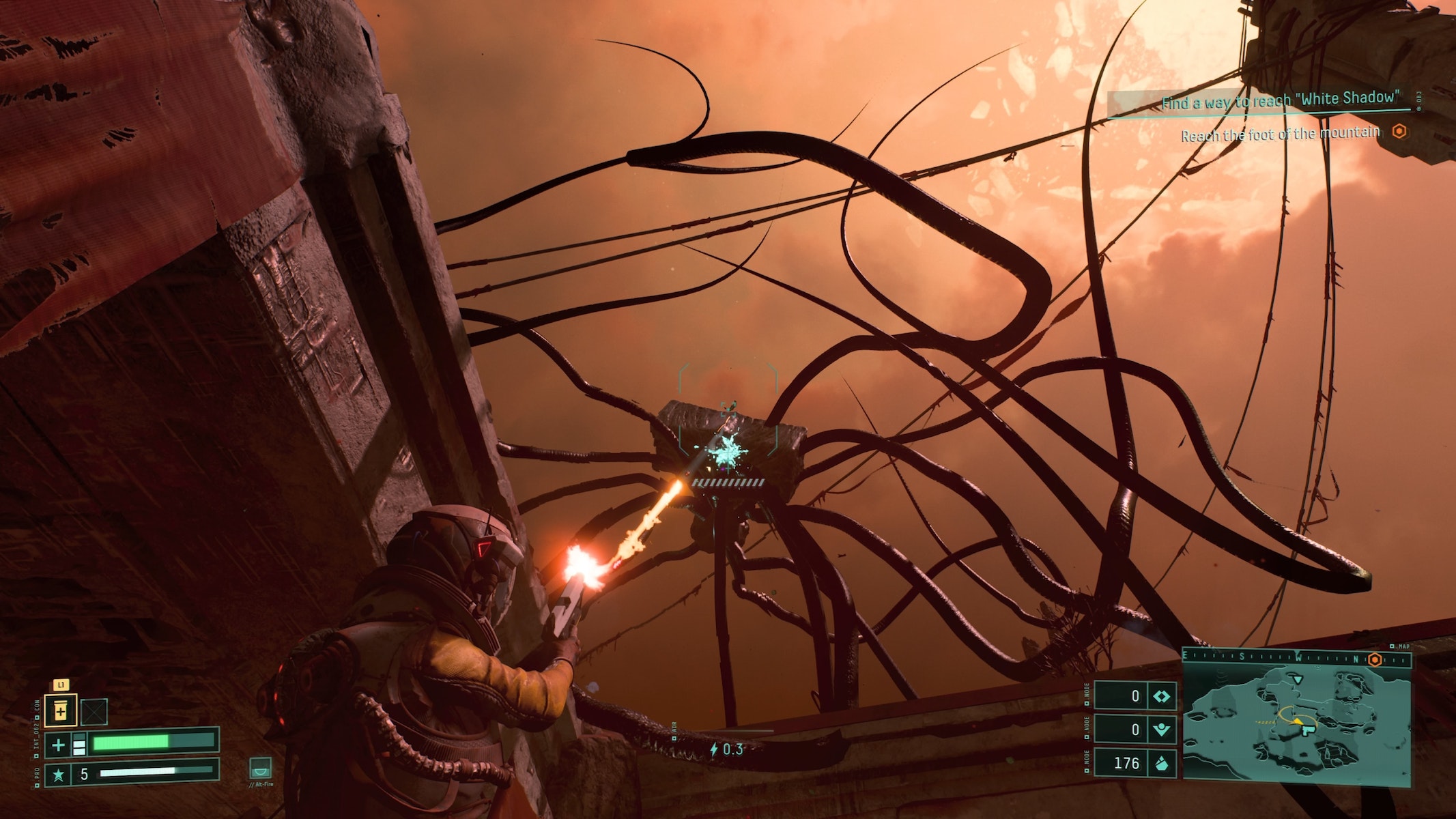 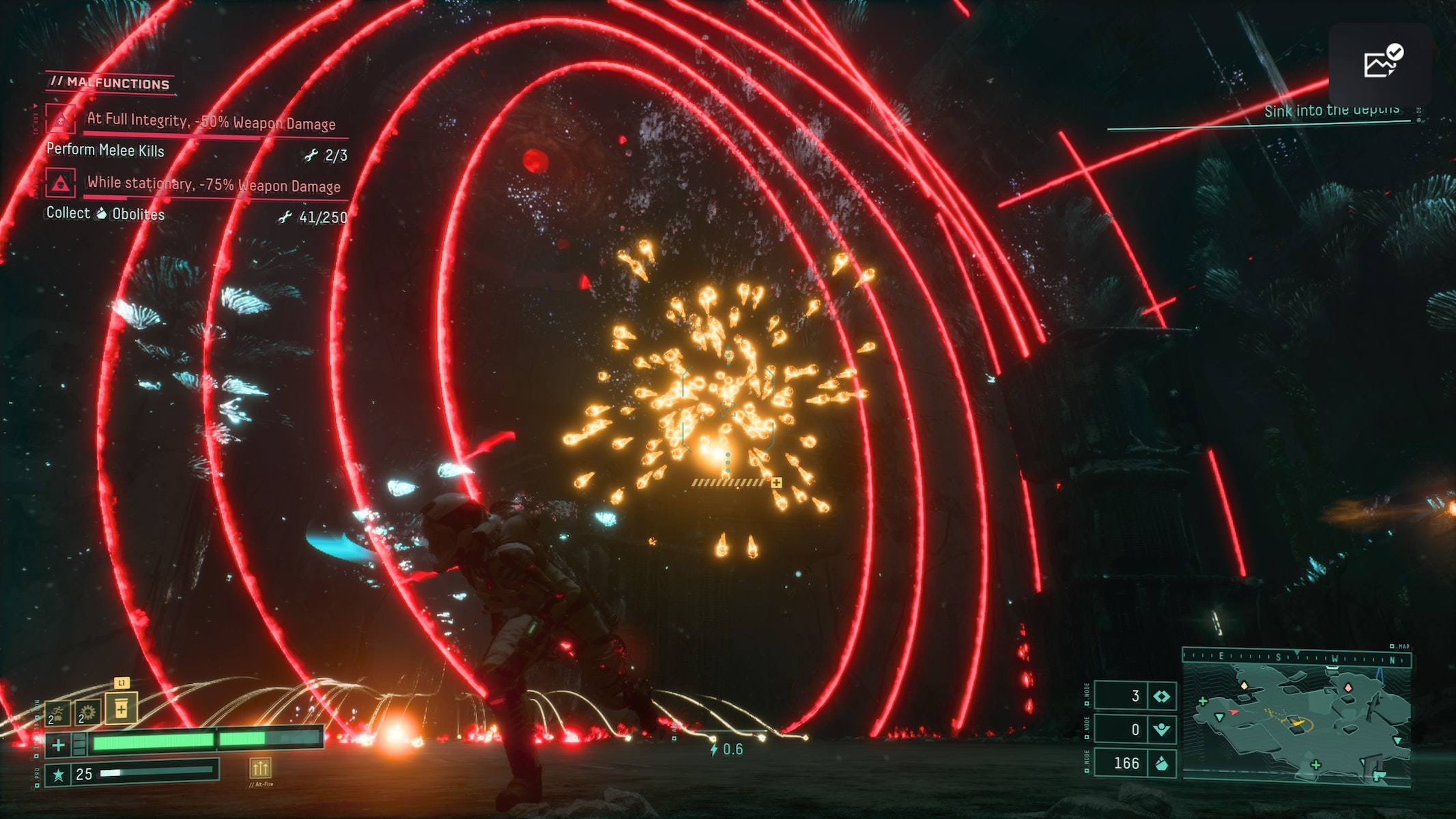 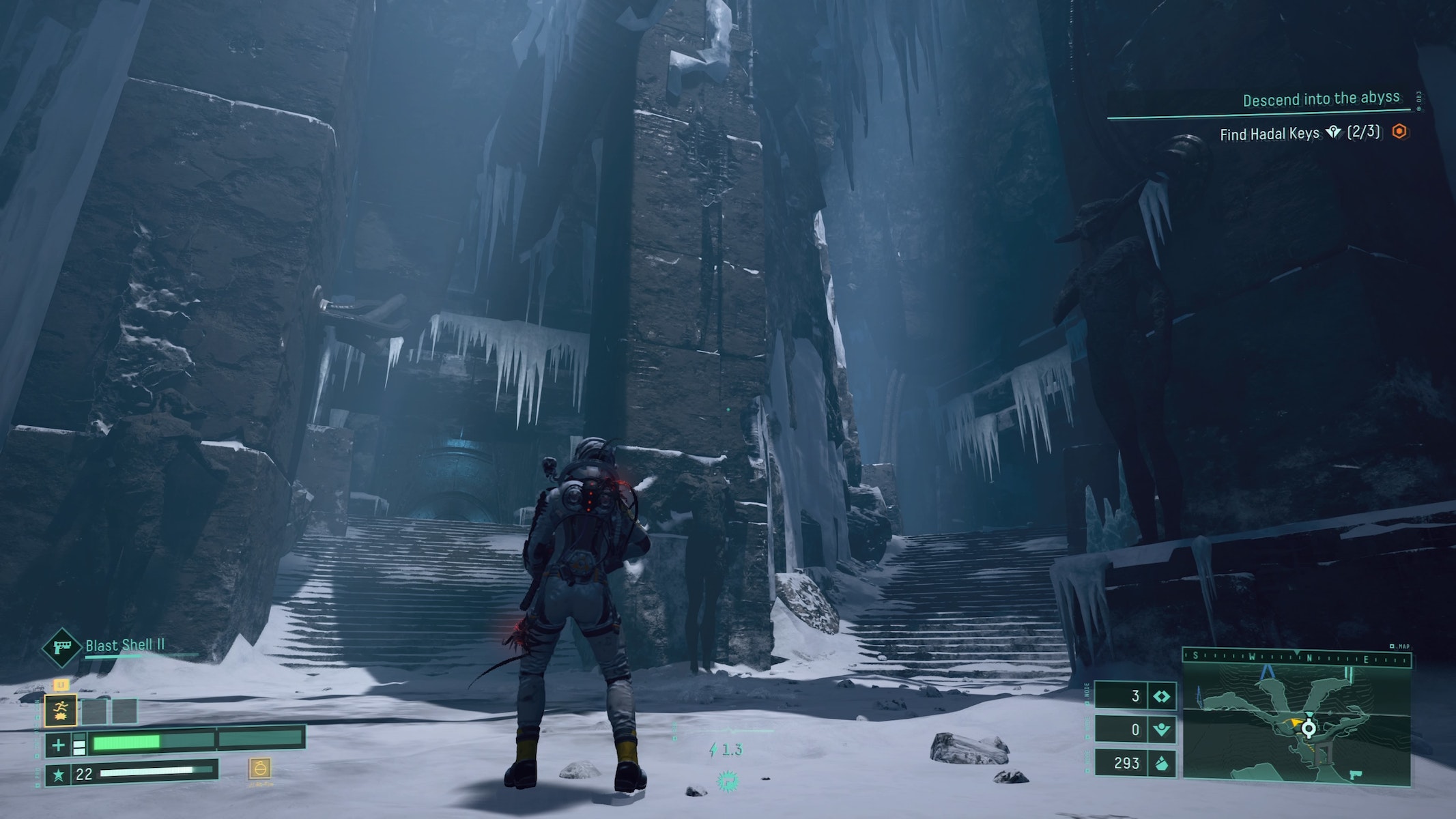 Clues and insights slowly cohere as you die and revive, revealing fresh audio logs, holograms of forgotten events, and different incarnations of Selene’s house. How much of Atropos existed before she landed there? Is this all projection, or a literal place?

Returnal offers several endings, but the two I’ve stumbled on raise as many questions as they answer. This might sound like bad writing, but Returnal is more interested in irresolution than closure. The story is less about plot and more the indefinite playing-out of themes of futility and guilt, obsessiveness and self-loathing. The details of who, what, where and when are just signifiers tossed onto a great, grey sea of pain.

Roguelikes are often pretty joyful things, for all their uneven difficulty. They are inexhaustible anecdote generators, perfect for social media, reliably coughing up tales of fluke victories and promising beginnings gone comically astray.

Returnal turns that inexhaustibility into tragedy. It’s a woman’s struggle with her demons, an account of an alien civilisation’s downfall, a pickled retelling of Greek myth and a mourning project for the arcade shooters of Housemarque’s youth. It’s an enjoyable action game, capable of endless permutations. But it is also an endless cry of despair.