More than four million people bunked off school and walked out of their workplaces to march through cities from London to Lahore, as part of the global ​“climate strike” spearheaded by Greta Thunberg, the Swedish teenager who’s become the moral voice of a generation.

The images that flooded in from around the world showed streets packed with placards (both alarming and amusing), and parks overflowing with protestors, reflecting the growing urgency of the climate crisis. No longer confined to the cultural margins, climate change has finally surged into the mainstream. From national governments to national galleries, different sectors and professions are tripping over themselves to declare that we’re living in a climate emergency – and so need to start acting like it.

The music industry’s version of this is the #musicdeclaresemergency initiative. It counts a growing list of well-known record labels (like Rough Trade and !K7) and artists (such as The Bug and Radiohead) among its members. The initiative that calls for rapid decarbonisation by 2030 acknowledges the environmental impact of music industry practices.

At the Glasgow climate strike, a poignant moment occurred that saw The 1975 collaborate with Thunberg – a song featuring her monologue over gentle piano orchestration, was played to the crowd. The 1975 are using their massive public platform (all three of their albums have topped the UK charts) to talk about climate change in a way that very few artists were prepared to do even a few years ago. They’re also taking some concrete steps towards reducing their environmental impact (for example, by repurposing old merchandise and reprinting on out of date t‑shirts to cut down on waste).

But not everyone has been impressed by The 1975’s efforts.

David Davies, a Conservative politician, caused some minor social media ripples by writing an open letter to the band, accusing them of hypocrisy, arguing that the carbon footprint of their world tour undermined their statements about climate change.

The tone of Davies’ letter, it seems, was his idea of sharp wit. But comments were petty and predictable; the tiresome ​“whataboutery” of a politician well known for his contrary views on climate change (in a nutshell, that the climate has always changed independently of human influence, and that everyone’s making a lot of fuss about nothing). But the wider point his heckling raises – whether music industry touring practices as they currently stand are undermining the efforts musicians are making and the advocacy they are engaging in – is worth working through.

The last available figures for the UK music industry suggest that about three quarters of its environmental impact comes from touring. But – unlike the global fashion industry, which has a much bigger impact – slashing the emissions associated with musicians performing around the world would have a more modest effect at a global scale.

Prominent DJ and producer Jayda G has been a strong voice for environmental science, hosting events and theming her album Significant Changes around her own conservation research. She argues there’s only so much we can pin on touring musicians, who (like everyone else) need to make a living. ​“It’s a pretty big thing to ask in terms of specifically asking DJs and musicians to reduce their air miles, because you’re asking people to take away their livelihood. I don’t think our society as a whole is really ready to do that until we have other alternatives that are easily available. For now, we have to hold our governments accountable. That said, I also offset my carbon emissions when touring and flying long-haul with Gold Standard accredited projects.”

It’s a no-brainer, but as we make the shift towards sustainability a lot of the things that we take for granted are going to start changing, and probably faster than lots of people are currently comfortable with. But cutting our collective carbon footprint can’t come at the expense of people’s livelihoods – we need to find a way for jobs and industries to adapt and adjust.

The phrase that’s used in campaign circles to capture this idea is a ​“just transition”, which tends to be applied to ​“blue-collar” workers in the extractive industries: coal, oil, cement making and the like. But there’s a ​“white-collar” and ​“creative” version of this transition story too. If we value what our musicians do, we need to (collectively) find a way to support people’s livelihoods in a way that’s also sustainable.

But while we shouldn’t hang touring musicians out to dry, creatives don’t get a free pass on their climate impact either. 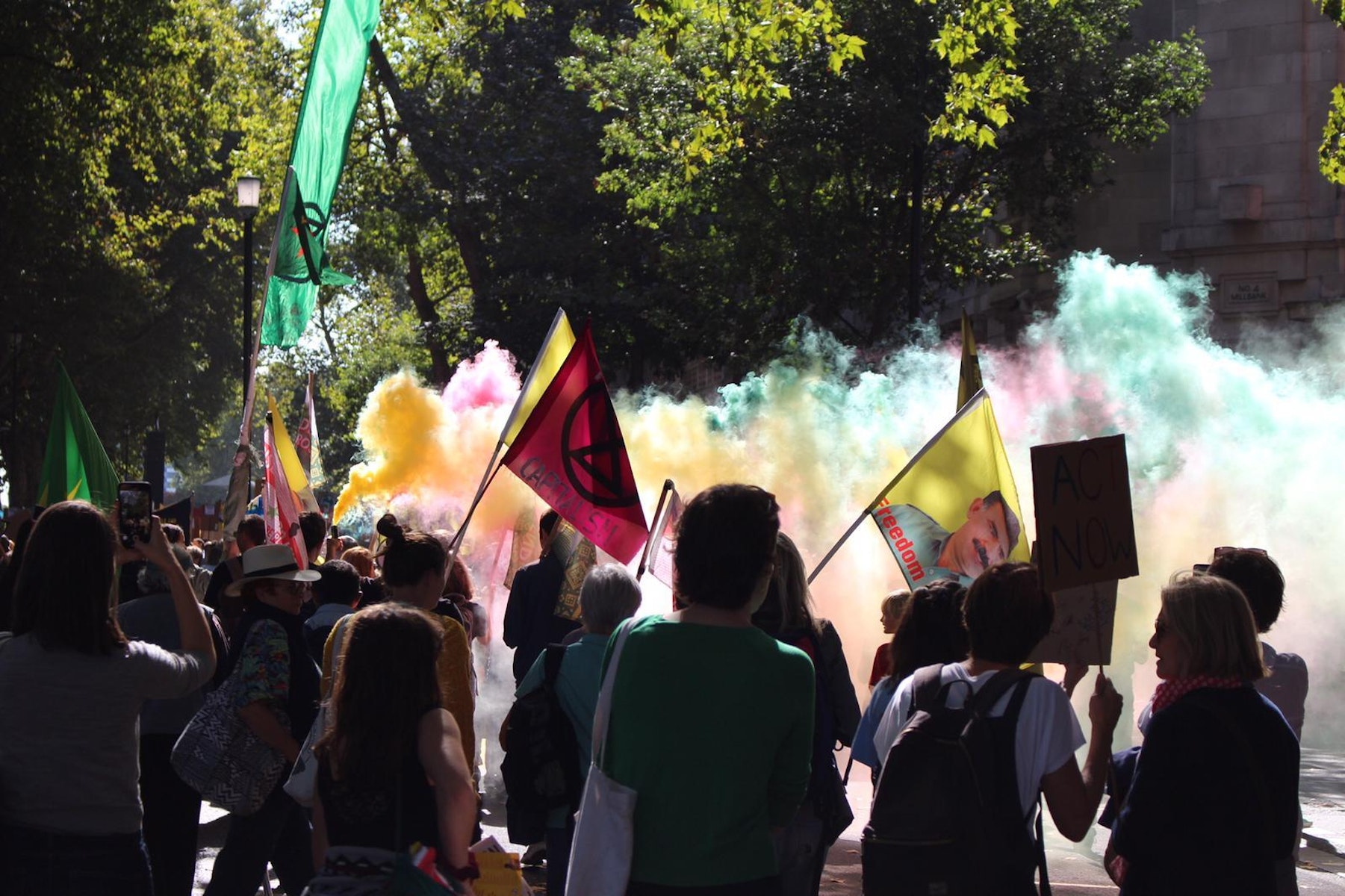 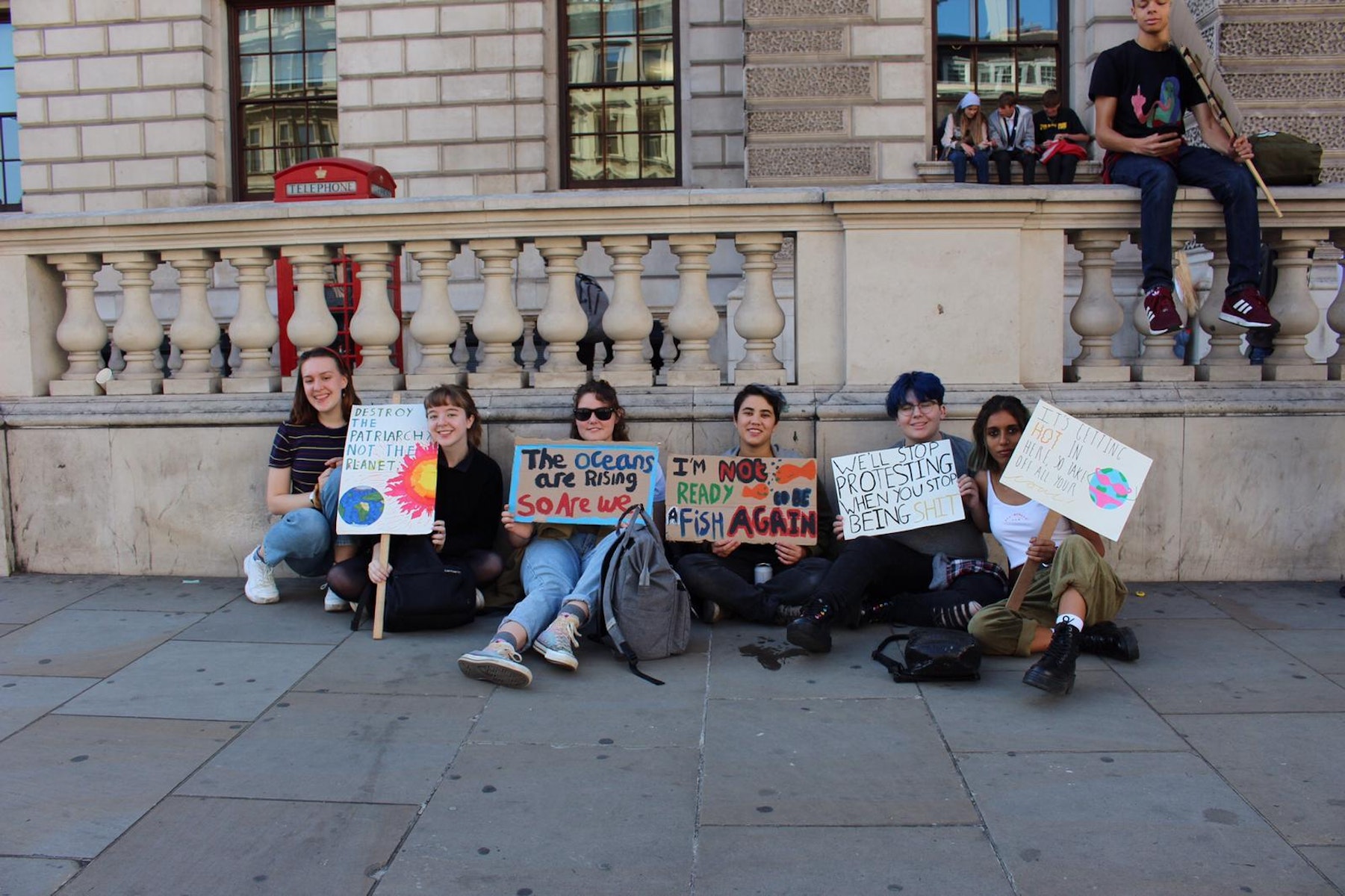 On a recent Desert Island Discs show, Thom Yorke told the host Lauren Laverne that he found his own behaviour (backing groups like Extinction Rebellion while flying around the world to perform shows) ​“hypocritical”. And according to the Berlin-based artist DJ and promoter Darwin, one third of the newly-announced Clean Scene initiative (a green pledge for the dance music community), things are beginning to change, but slowly: ​“I think the conversation is starting to happen, but when we see more efficient tour routes and people reducing flights, that’s when I’d be confident to say a shift is happening. We’ve lived in an indulgent consumer world for too long and it will be the end of us if we don’t act now.”

So what does a more sustainable music industry actually mean? Offsetting (planting trees to reduce the impact of a flight) is only a nearterm sticking plaster: emissions need to come down fast, not just level out. Within Europe, and especially for electronic artists or DJs without much gear to lug around, overland travel is an option – trains have a fraction of the carbon footprint of flights. And organisations like Julie’s Bicycle are working hard to change industry practices via education and advice.

But much of what needs to happen is a collective re-imagining of what a sustainable music industry looks like. Because as with many things that feel like an inalienable part of modern life, the idea that every major European city has a selection of DJs from around the world performing on any given weekend is a fairly recent invention.

Would it really be so bad, so long as people still made a living, if we shifted away from the idea that a night out hinges on jetting somebody in for a two hour performance? 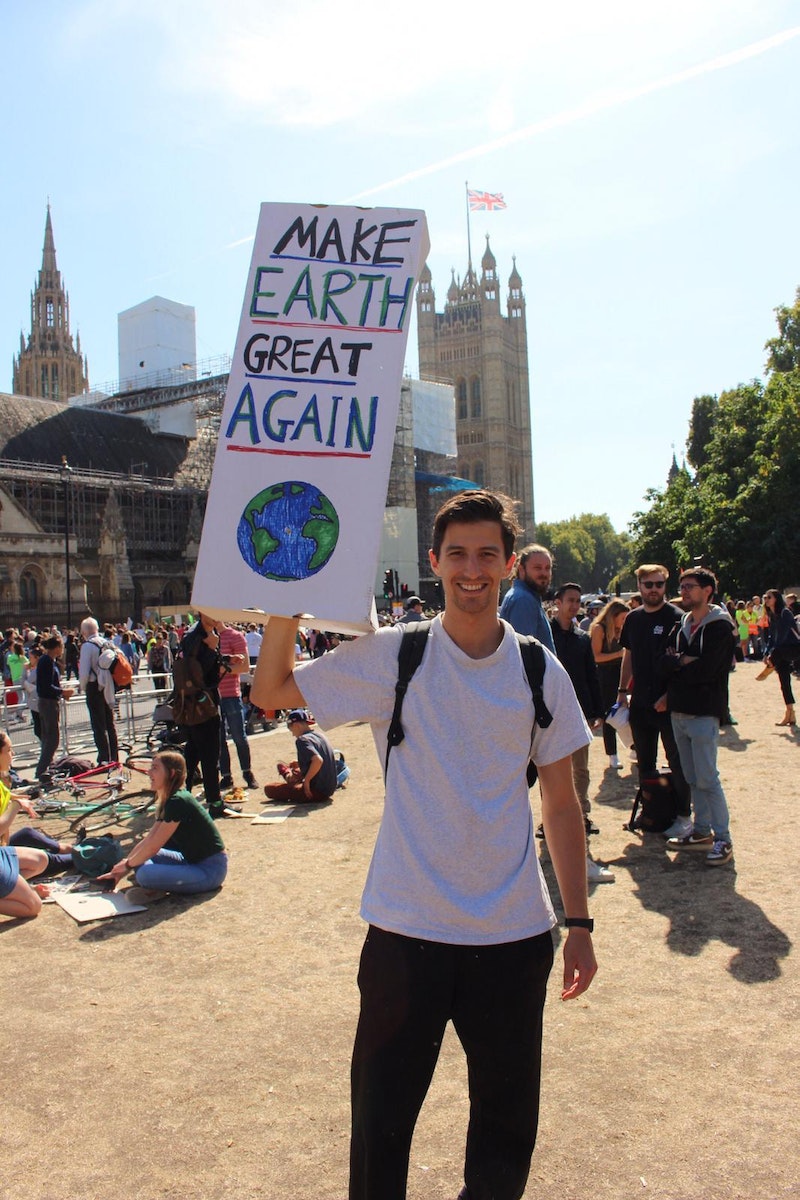 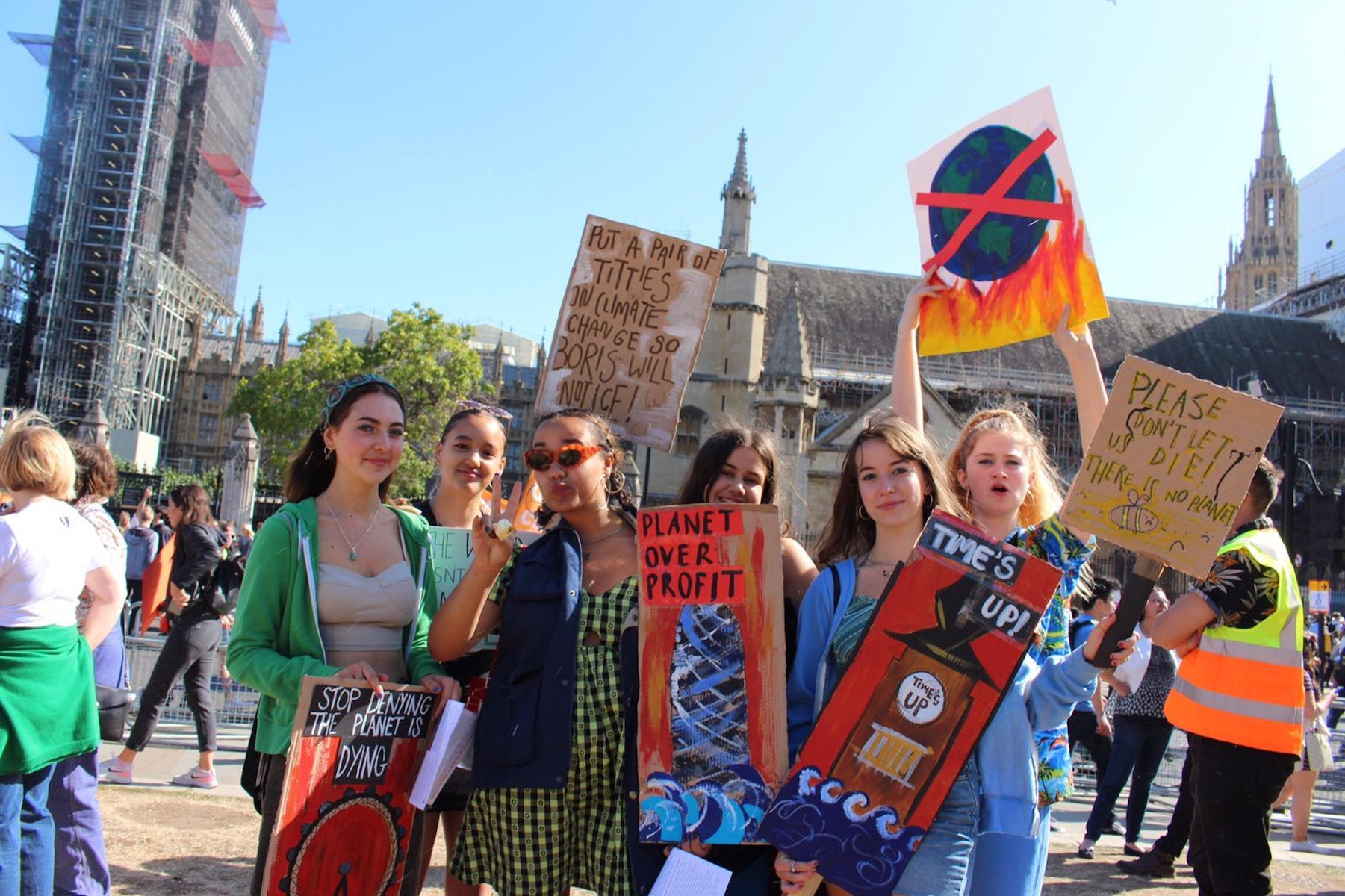 In an increasingly mediated digital age, do performers have to be ​“in the room” to have the impact they want and the one that their audience’s seek? The bizarre spectacle of holographic DJs is a niche but operational concept, but the music industry is taking the potential of VR very seriously (beaming immersive live content directly to people’s sofas). And as the digital artist and philosopher of technology Mat Dryhurst pondered on Twitter, might streaming platforms like Boiler Room have a boost in popularity when ​“carbon taxes eliminate cheap flights”? These are big and in some ways uncomfortable questions, but if any industry can creatively get to grips with re-thinking how it operates, you’d hope it would be the forward-thinking, progressive-leaning world of music and performance.

Although as an industry, DJs and musicians may not be the biggest emitters in town, the highly visible – and for now, highly desirable – lifestyles that they often live are sending a powerful message. Psychological research shows clearly that the social signals sent when people avoid flying, or make another low-carbon choice, are powerful in terms of shaping others’ behaviours.

And if the #musicdeclaresemergency push is really going to deliver on its own ambitions, then over the next two decades it needs bold new ideas and a recognition that musicians who can walk-the-talk have an incredibly powerful platform. Those in the public eye have the greatest responsibility. And practicing what you preach is a powerful defence against people like David Davies.