Lauren* was 18 and in her first year at Manchester Metropolitan University when her friend, Melissa*, fell into a K‑hole at a party in her flat. She briefly left Melissa with her flatmate, Ben*, while she went outside for a cigarette. When she returned, Ben had taken Melissa into his bedroom and locked the door. Melissa woke up the next morning with no underwear on, bruises all over her thighs and no recollection of what had happened. Lauren confronted Ben. Eventually, he admitted that he ​“may have raped her”.

“I immediately went to the university and relayed the story to them, but they refused to do anything unless Melissa came forward herself, despite him admitting that he’d done it,” says Lauren. Melissa didn’t want to report the incident, because she felt the university wouldn’t believe her.

Lauren complained and asked for Ben to be transferred to different accommodation. ​“The other girls in my flat and I didn’t feel safe living with him. But the university did nothing. They only offered to change our accommodation, inconveniencing us but not him.” When Lauren was later sexually assaulted herself, Manchester Metropolitan’s previous lack of action deterred her from reporting the incident. ​“The uni management doesn’t care about students, only their image and reputation.”

A Manchester Metropolitan University spokesman responded: ​“The safety and wellbeing of our students is always our top priority. Any form of sexual harassment and sexual assault is completely unacceptable and any reports are taken extremely seriously.” The university noted the range of measures it has in place to support students, including an online ​‘Report and Support’ reporting system, distributing personal alarms to students and utilising the SafeZone app.

“We will also be delivering new training for our security staff and residential life staff on how to response to sexual harassment and assault, and are continuing to deliver a programme for students that focuses on the themes of sexual consent and bystander intervention,” a spokesman continued. ​“We have been working closely with students, police, and other community stakeholders to ensure a multi-agency approach to student safety and wellbeing.”

This is not an isolated incident. Universities across the country are rife with sexual harassment and assault. In just one week, anti-rape organisation Everyone’s Invited recorded over 1,000 testimonies exposing a ​“rape culture” in UK universities, naming 86 institutions. Meanwhile, a survey by the Office of National Statistics revealed that students are almost three times more likely to experience sexual assault than the national average. And, despite the pandemic, sexual assault on university campuses remains high. As of this February, over 150 reports had already been made for the 2020/​2021 academic year.

Evidence points to a widespread problem, but universities have a history of failing to react sufficiently to reports of sexual violence on campus. A prime example is the University of Warwick’s mishandling of the infamous ​‘Rape Chat’ scandal, which saw students who had shared messages such as ​“Rape the whole flat to teach them a lesson” allowed to return to the university campus 12 months later. Incidents like this have eroded trust between students and universities. Just seven per cent of those who experience sexual assault report it to their university.

University of Warwick students have had enough. In the aftermath of Sarah Everard’s murder, there was an outpouring of female students sharing their experiences of sexual violence on campus. A group of students, including Cai Kennedy, 19 and Brin Arnold, 18, set up Protect Warwick Women, demanding the university does more to tackle sexual violence.

“In the space of a week, I was made aware of three different women in my friendship group who had been assaulted since coming to Warwick – and we’re all first years,” says Kennedy. ​“We’d grown tired of hearing about this happening and we wanted to do something about it.”

Since 18th March, Protect Warwick Women have occupied the university campus’ central piazza. They won’t back down until the university implements their demands, which include improving student wellbeing services, disciplinary procedures and sexual violence education for both staff and students. They also want to introduce signposted safe spaces, and greater transparency and accountability for the university. 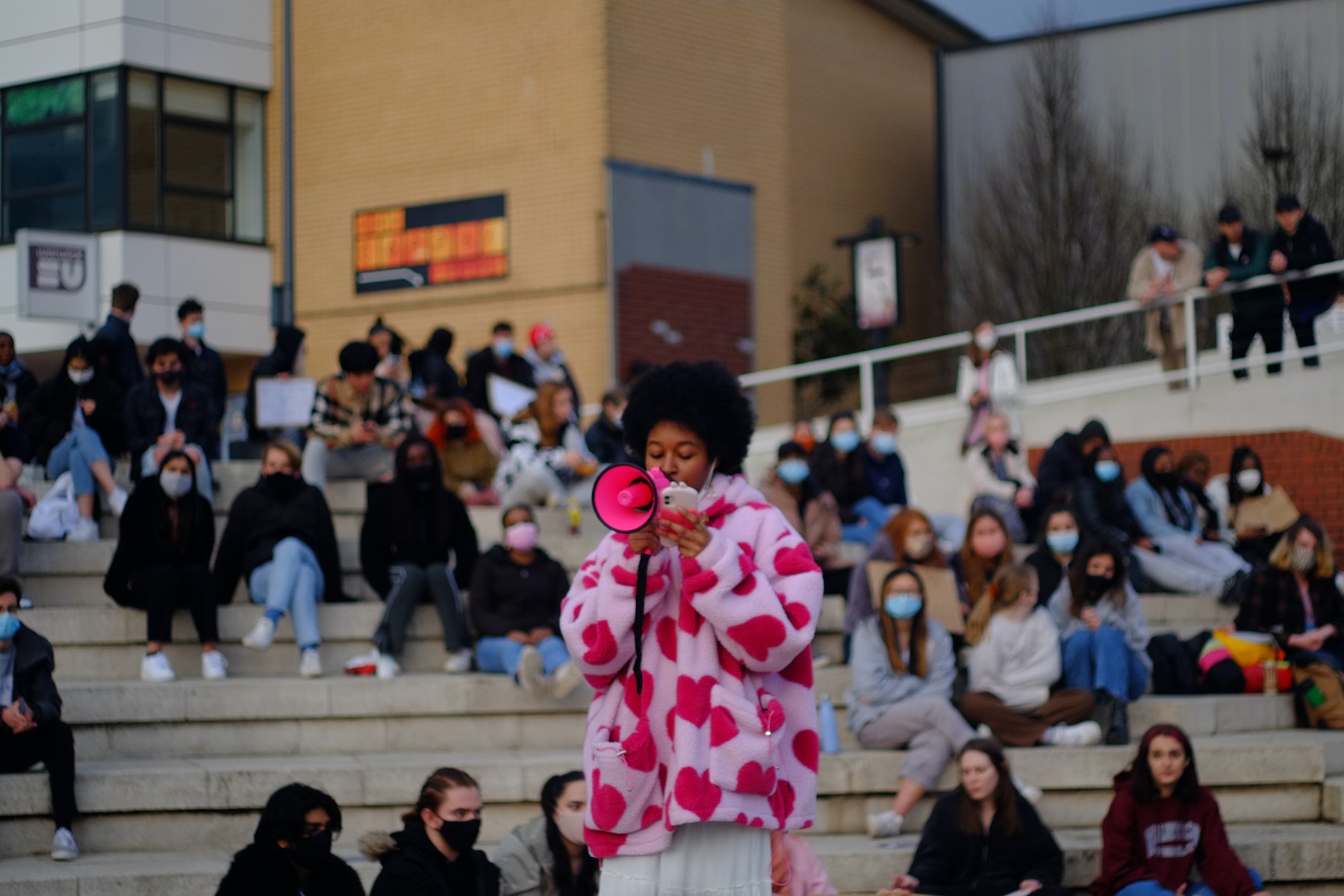 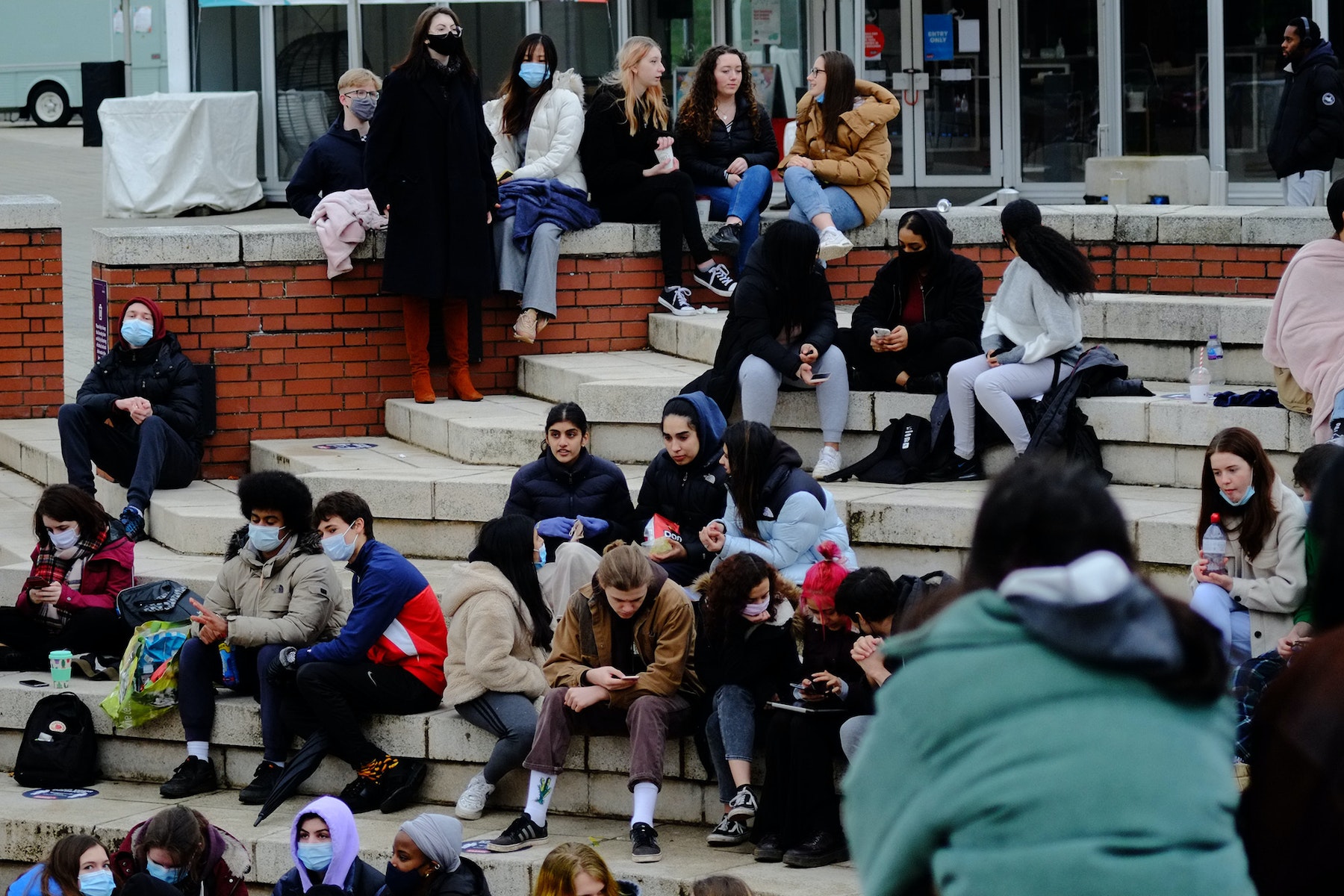 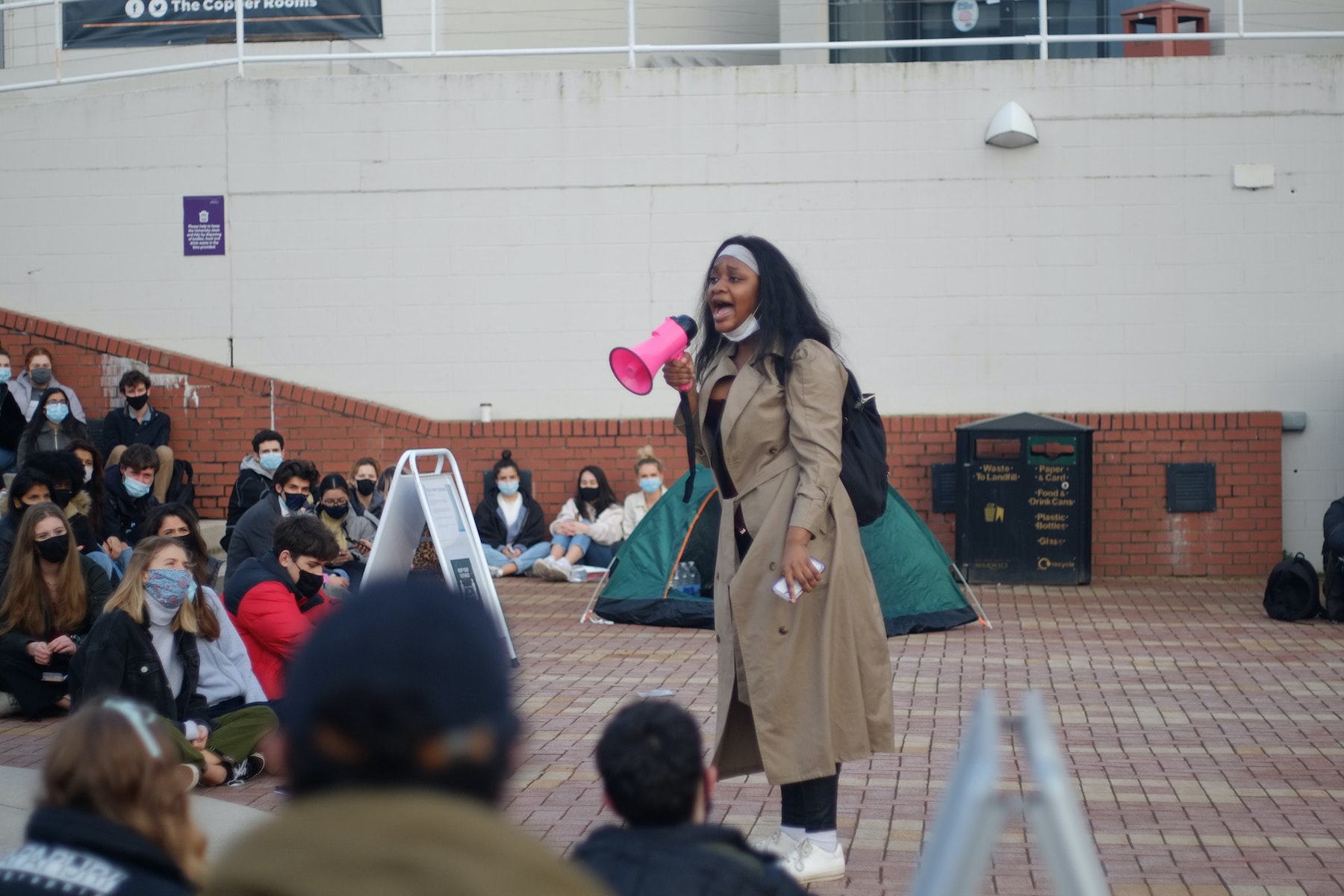 The University of Warwick says it has met with the group numerous times and is open to many of their demands. ​“We have listened to them, discussed their ideas at length and made a number of changes as a result.” The University already claims to have a zero-tolerance towards sexual assault, alongside a comprehensive disciplinary process and effective support services. However, they admit that there’s always more they can do. ​“We are committed to looking at ways of further improving our approach, through listening to students, working with specialists and implementing best practice guidelines.”

Protect Warwick Women say that a lot of women have reported being assaulted in student residences by people they live with or ​“friends of friends” since the start of this academic year. Arnold suggests this could be because people’s social circles are much smaller than usual during the pandemic.

Students are now also at risk of being punished themselves if they report an assault. Out of 17 universities questioned by The Tab, five did not rule out the possibility that a victim might be punished if they’d been breaking lockdown restrictions at the time of an assault. Protect Warwick Women reports multiple cases where students have gone to campus security after being assaulted, only to be asked, ​“Why were you breaking Covid restrictions?”

“It’s absolutely ridiculous that, if someone’s been assaulted, you would punish them for breaking coronavirus guidelines,” says Arnold. ​“The number of cases that have gone unreported because someone’s scared of that is absolutely massive.” The University of Warwick insists that no disciplinary action will be taken regarding the breaking of Covid restrictions in such cases.

It doesn’t help that many students are immersed in an environment where sexual assault is trivialised. ​“There’s a lot of lad culture, particularly within sports societies, where it’s funny to joke about rape. They don’t see the seriousness of it,” says Meredith Graham, 24, who founded a support group for survivors, Say It Loud, after she was raped during her second year at Oxford Brookes.

It’s unlikely that everyone who laughs at these jokes finds them funny, but a lot of students just want to fit in. Going against the grain could lead to alienation, which makes it difficult to speak up. Not calling out this behaviour, however, only works to normalise it.

“When people in these groups don’t say anything, they’re making this massive statement that it’s normal, it’s funny, it’s fine,” says Graham. ​“99 per cent of people who reach out to Say It Loud don’t even realise they’ve been sexually assaulted. People don’t realise that a crime has been committed against them, because they’re immersed in this environment where rape is normal. But it’s not and it shouldn’t be seen this way.”

Between students minimising sexual violence and universities taking a stance of inaction, a narrative is being formed that tells victims their trauma doesn’t matter. Clinical and forensic psychologist Dr Naomi Murphy stresses the importance of survivors being properly supported. ​“There’s so much self-blame after sexual assault and victims need to hear that whatever they did or felt in that situation was completely valid.”

Being able to talk openly allows victims to explore the complex range of emotions that come with being sexually assaulted, whether that’s anger, fear, sadness or something else entirely. When trauma is dismissed, as Dr Murphy explains, there’s no room for a healthy discourse and healing process. This can result in long term ramifications, including problems relating to both other people and the victim’s own body, problems with sexual intimacy and depression.

“There is an institutional failure to the point where they’re not just being inactive, they’re being actively compliant and protecting perpetrators of assault,” says Brin of the University of Warwick.

At Warwick and beyond, many female students are unable to enjoy their university experiences to their fullest, because they feel as though they can’t let their guard down. The sexual autonomy of victims is being stripped away. These institutions are essentially facilitating rape culture. As Brin says, ​“Not taking a strong stance against sexual violence is actively taking a stance against protecting and supporting students.”

*Names have been changed to protect identities