It has been years of waiting, shouting from the sidelines and campaigning in relative obscurity but the sun is finally shining on the Greens. Well, it isn’t; it is the Green Party’s Spring Conference in Scarborough and it is raining hard.

Still, party members are in the main hall listening to their one MP Caroline Lucas being rightfully pleased with herself.

“The idea of the Green New Deal has its origins in the global financial crisis over a decade ago: in early 2007, there was a small meeting of experts in finance, energy and the environment and I was very lucky to be among them,” she told the crowd.

“Back then, we knew we didn’t have all of the answers by any means and looking at a newspaper article that we wrote at the time, we concluded ​‘our proposal is the first word, not the last. If you can enhance the Green New Deal’s response, please tell us.”

“It took them a while to get back to us but 11 years on, I’m delighted that the Green New Deal is now absolutely mainstream.”

Green Party Co-Leader and Member of the London Assembly Sian Berry and Green Party Co-Leader Jonathan Bartley deliver their speech during the Green Party Spring conference held at the Scarborough Spa Complex on June 08, 2019 in Scarborough, England. Around 600 Green Party delegates from across the UK attended the conference which comes after recent success in the local elections in May where the party gained nearly 200 new councillors and saw its number of MEP’s rise from three to seven. Ian Forsyth/Getty Images

Later that day, at an event to celebrate twenty years of the Greens’ presence in the European Parliament, former MEP Jean Lambert said with a wink: ​“It’s been very nice to remind Labour that the European Greens actually had a manifesto in 2009 called Green New Deal – thank you Labour, nice to see you catching up!”

They are right to feel smug. If it started as a fringe movement most deemed unrealistic, the GND – a grand plan to address both climate change and economic inequality through sweeping reforms and massive investment – is now everywhere.

Over the past few months, US politics rising star Alexandria Ocasio-Cortez has presented a version of it to Congress, The Guardian has come out in favour of one for the UK, and politicians from all parties (including the Conservatives) have called for a Green New Deal to be passed through Parliament.

It’s not just that, of course; though it has been hard for any issue to cut-through in Brexit Land, climate change and the environment have been everywhere. There were the climate youth strikes across more than 100 countries; direct action from Extinction Rebellion leading to central London coming to a standstill for a week; widespread media attention for teen activist Greta Thunberg, Parliament voting to declare a climate emergency, and much more.

So, what does it feel like to be in the party that was right all along? ​“We’ve been been on the right side of history on a lot of the big issues,” said Greens co-leader Jonathan Bartley, ​“but there’s no political capital in being right.”

That doesn’t mean that he’s not enjoying the momentum swinging in his direction: ​“I did an interview for 5Live during the Euro elections, there were about eight of us from different parties, all talking at the same time, and it was really hard to cut through. We were talking about Brexit, had a whole bunch of Remainers and Brexiteers, and it was very hard to have a meaningful discussion. Then I just talked about the climate, and suddenly, everyone was falling over themselves to talk about the climate, they all piled in.”

This was a bit of a recurring theme over the weekend; the Greens have been banging on about the state of the planet for decades, people are suddenly listening, now what?

For some, it is a cause for celebration: Chandler Wilson is 18, has been a Green member since they were 13, and is really happy that their generation is waking up to what they’ve cared about for so long.

​“It’s been great to see so many young people getting out on the streets and showing that they won’t take the adults who are in Parliament destroying our future to make profit,” they said. ​“And the statement of not going to school because ​‘why does it matter if we’re not going to have a planet in 25 years’ time?’ has really been a wake up call. It’s shocking that it’s taken this long but it has given me hope that we’ve got that momentum now.”

Charlie Keller agreed; an 18-year-old as well, they joined the Greens in 2017 and welcomed this new enthusiasm for climate campaigning: ​“When I was in high school, I wish people would have been more active in realising what was happening, and getting involved in politics, because I was the only person that was actually doing things, so it’s great that we have this new sense of community.”

That being said, they are worried that people finally talking about climate change is one thing, but them doing something about it is quite another. ​“I’m concerned that the government aren’t doing enough; declaring a climate emergency alone isn’t enough. It’s just a statement.” 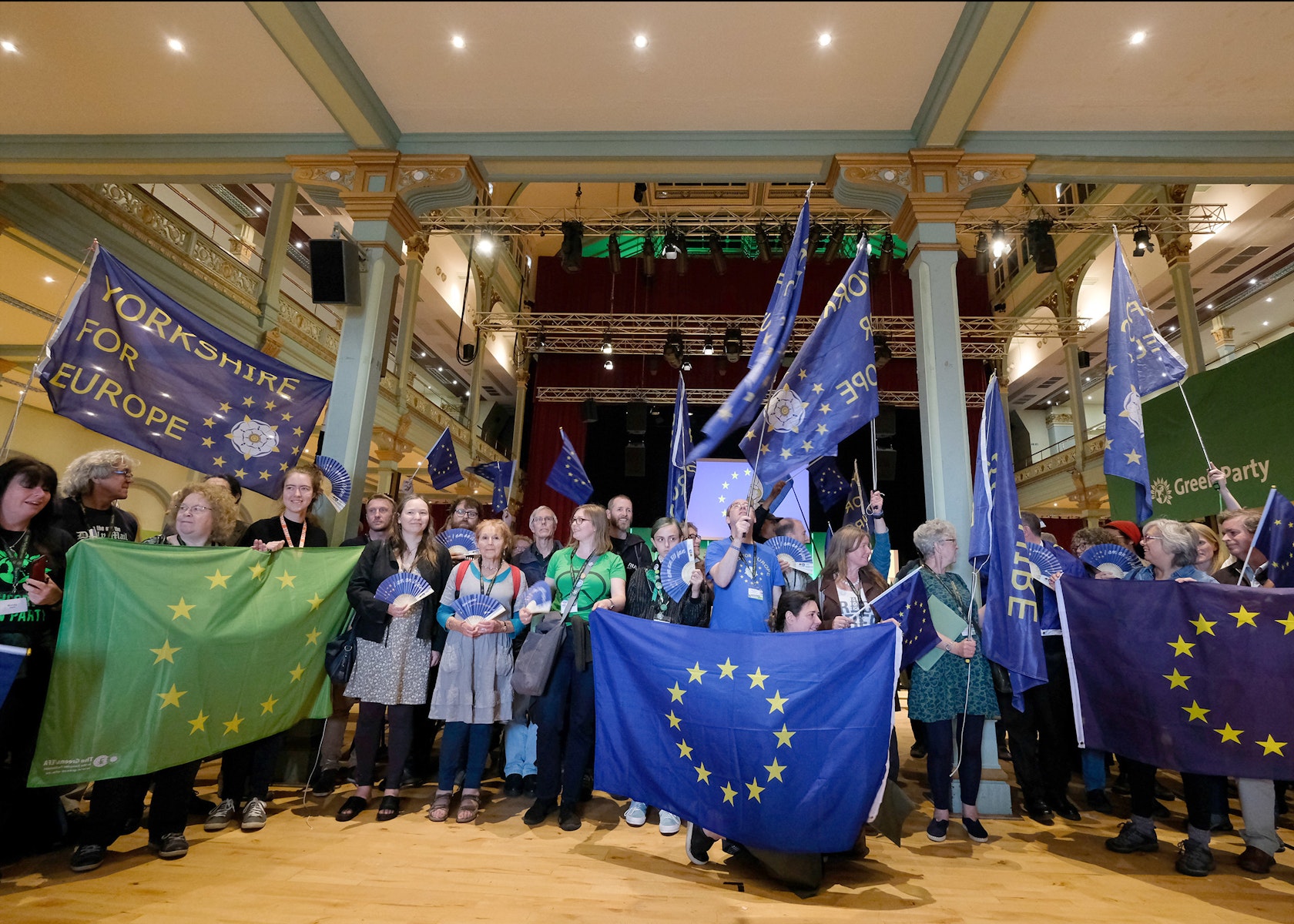 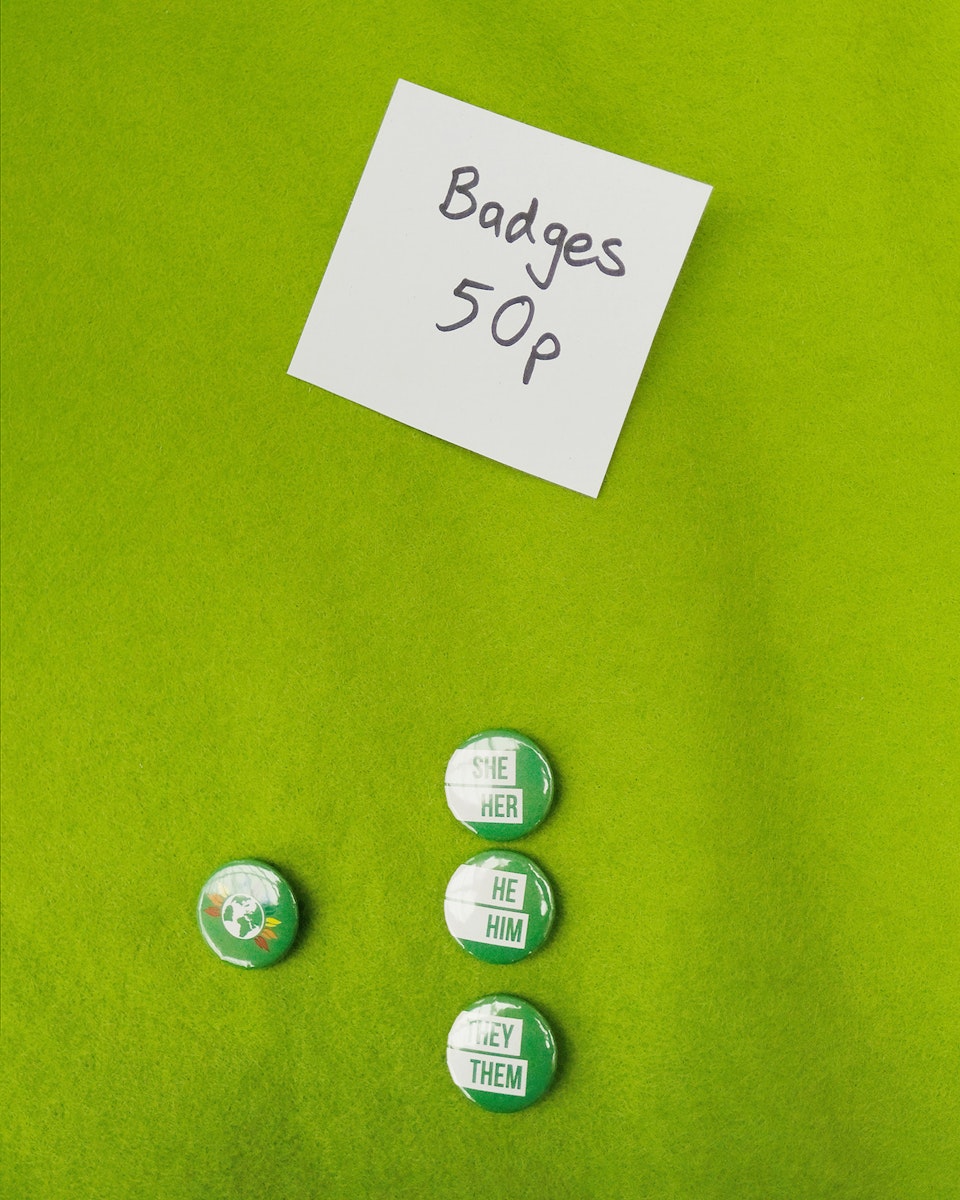 Badges are sold at a stall during the Green Party Spring conference held at the Scarborough Spa Complex on June 08, 2019 in Scarborough, England. Ian Forsyth/​Getty Images

They were far from alone in this. Having the wider world finally sharing your concerns can be a bit of a double-edged sword, it turns out; while all parties now say they’re very concerned about the future of the environment, few are as radical in their proposed solutions as the Greens.

It might be easy to forget, but they aren’t a one-issue party. In order to ensure that the planet has a future, they argue that our society must fundamentally change the way it works, from the mass creation of sustainable green jobs through investment of billions of pounds, to putting and end to economic growth being a country’s main goal, and focusing instead on equality and well-being. It goes way beyond Michael Gove banning plastic straws.

Magid Magid, the party’s new Yorkshire and the Humber MEP agreed: ​“we’re just happy everyone’s getting on board right now, but it should be so much more than just ​‘oh, this is quite popular at the moment, let’s all get on with it.’ It’s all very good people saying that what we need action, but we need people to actually put some money behind it and really take it seriously.”

A former Somali child refugee, Magid is 29-years-old, the former Lord Mayor of Sheffield and rose to prominence when he posed for his official portrait wearing a ​“Donald Trump Is A Wasteman” t‑shirt. Though the Greens’ conference was mostly pale, male and stale – as all political conferences tend to be, to be fair to them – Magid is one of a new generation of climate activists, who look and sound more representative of the country they’re trying to save.

Fatima Zahra-Ibrahim is another one. A campaigner for WeMove​.EU and a Muslim woman, she appeared on one of the panels and discussed her own experience as an environmental campaigner: ​“I’ve been an activist for a really long time; I’m 26 – I’ve been an activist since I was 15, some 11 years, and throughout that time, I felt the narrowness of the climate movement.”

“It’s deeper than just the fact that usually I was in rooms with people who didn’t look like me, but I wasn’t able to articulate what that was until a couple of months ago when I joined the youth strikers in London. I was surprised by what I saw; it was a diverse movement, young people from different socioeconomic backgrounds, different ethnic backgrounds, and different religious backgrounds. And for once I didn’t feel like I stood out.”

This is undoubtedly positive but Zahra-Ibrahim also offered a word of caution: if the people in that room didn’t offer a compelling vision to those people now worried about the climate emergency, others will.

She pointed specifically to the worrying rise of eco-fascism, a movement destined to turn the threats against our environment into a reason to clamp down on immigration, shut all borders, and worse.

This is a concern Magid shared as well. ​“If you live in a working-class town and you’ve got so many other issues going on, like paying the bills or whatever, climate change is not at the forefront of your day to day life,” he said. ​“As a movement, we need to get better at actually communicating. Air pollution, for example – in Sheffield, it contributes to 500 early deaths there, and that can be cars idling outside schools, all those kind of examples that people can see day to day, so it’s not this holistic issue but something people can actually relate to.”

Still, the mood at the conference remained largely positive. The event originally intended to wave goodbye to the Green party’s presence in the European Parliament turned into a celebration of the extra seats they won last month, and there was widespread joy about them gaining their highest ever number of councillors in the local elections.

It is not clear that they will manage to push their radical left-wing vision for Britain onto the country, or that the next step is electoral dominance – they are still a small party – but they are realistic about their chances, and seem comfortable with their situation.

“I don’t think anyone joins the Green Party for political ambition, they join it because they want to bring about the change,” Bartley said at one point, and walking around the Scarborough Spa made it obvious.

Instead of the eager men in suits looking purposely busy – which is what you usually encounter at party conferences – this was a gathering of mostly older people, wearing sandals (with or without socks) and merrily going on about their business, aware that they won’t be a party of power anytime soon.

It isn’t really defeatism; simply that they know their place, and have their own way of making themselves relevant.

In Bartley’s words: ​“Over the last 10 years, UKIP has had these massive opinion poll ratings, going up to 15, 16%, but actually fewer MPs than we’ve had but the other parties have gone out to try and win those votes back, so UKIP has shifted the whole agenda of British politics in the wrong direction. You’ve seen all the other parties compromise on migration and whatever else it might be, to try and win those votes back.”

“Our job right now is to continue to do what we do and get that vote share up even further, so the other parties try and get those votes back from us and then hopefully, we’ll shift things back in the right direction.”

Best of luck to them.