It was while studying at Rhode Island School of Design that Raf­fael­la Han­ley realised that her interests had changed. At some point she had begun to feel uninspired by formal art school education; she found herself in search of a clean slate. It was 2013 and like many an artistic New Yorker before her, she turned to fashion.

That leap of faith paid off. Now five collections deep, Hanley is a finalist for this year’s Vogue/​CFDA Fashion Fund. Those who made the shortlist were dubbed by Anna Wintour as ​“a true reflection of American fashion – and the world today – speaking to creativity, community, and sustainability.”

She has earned her place among the emerging greats by creating a label with meticulous hand-craftsmanship, and an unmistakable sense of place, at its core.

“Coming from a city like New York you’re always try­ing to find a lit­tle escape in some­thing because it’s so over­whelm­ing at times,” says Hanley.​“The city is almost like a movie set. It’s so roman­tic in its archi­tec­ture and the sky­line is so icon­ic. It also plays into the idea that you’re actually in the film. It’s such a cin­e­mat­ic city.”

Her designs are influenced by film, too. Specifically David Lynch, and the way in which his work simultaneously straddles dreams and reality. In the pieces in her recent (and first) Resort collection whimsical frills were paired with Pepto-Bismol pink, hair was preened to ​’50s Hollywood housewife standard and layered knits were worn with decorated tights (a Lou Dallas signature). All of which made for models who looked like they’d walked straight out of a bedtime fairytale.

Meanwhile, her commitment to sustainability is worth noting. Upholstery fabrics sourced from NYC’s Garment District featured in Resort 2020, while previous collections have seen Hanley re-use her mum’s left-over fabrics from the costumes she makes. Hanley’s designs are made for layering – slashed tops may not be the most ​“wearable”, but pop a vest underneath and bam, you have yourself a Lou Dallas look. Versatile, surreal and quite sexy. 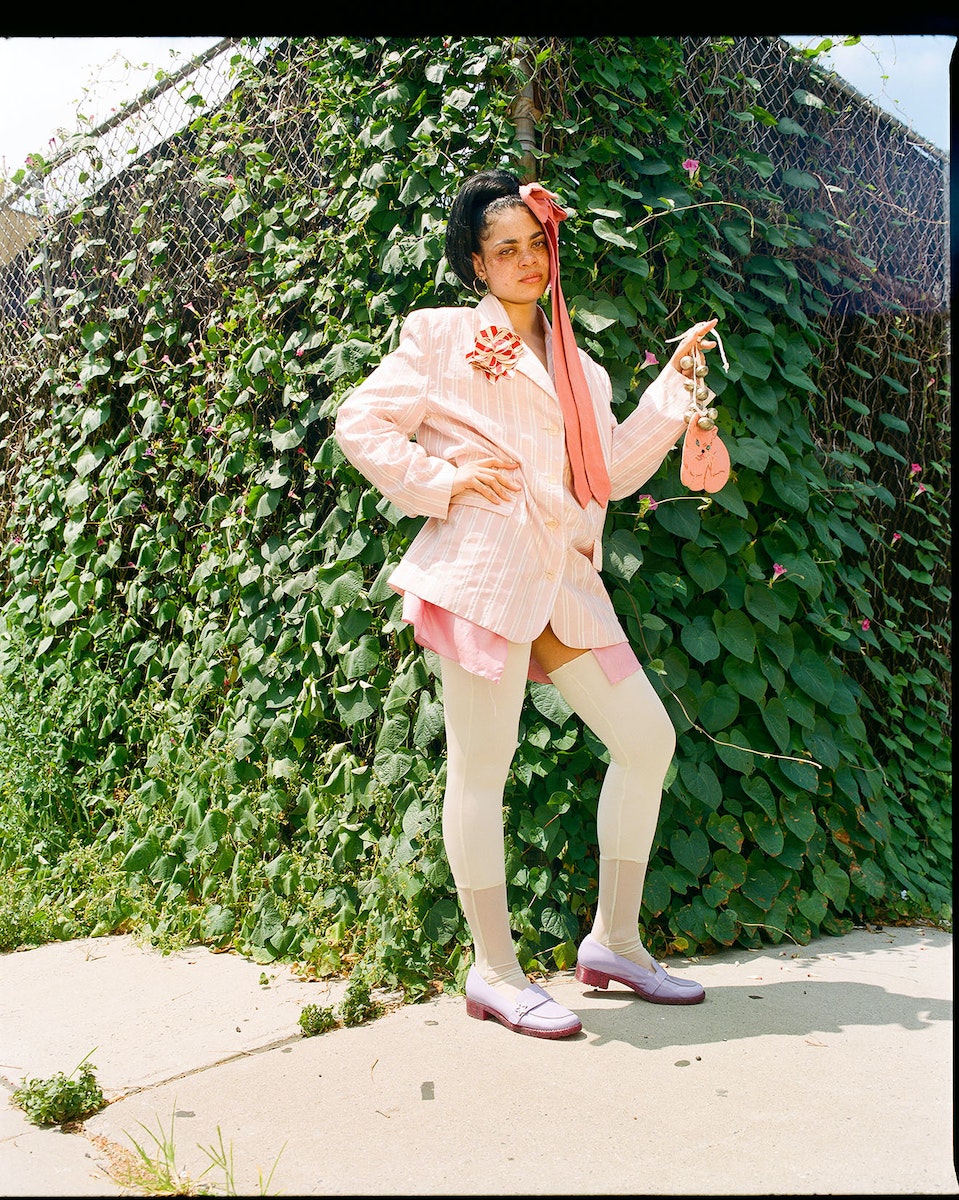 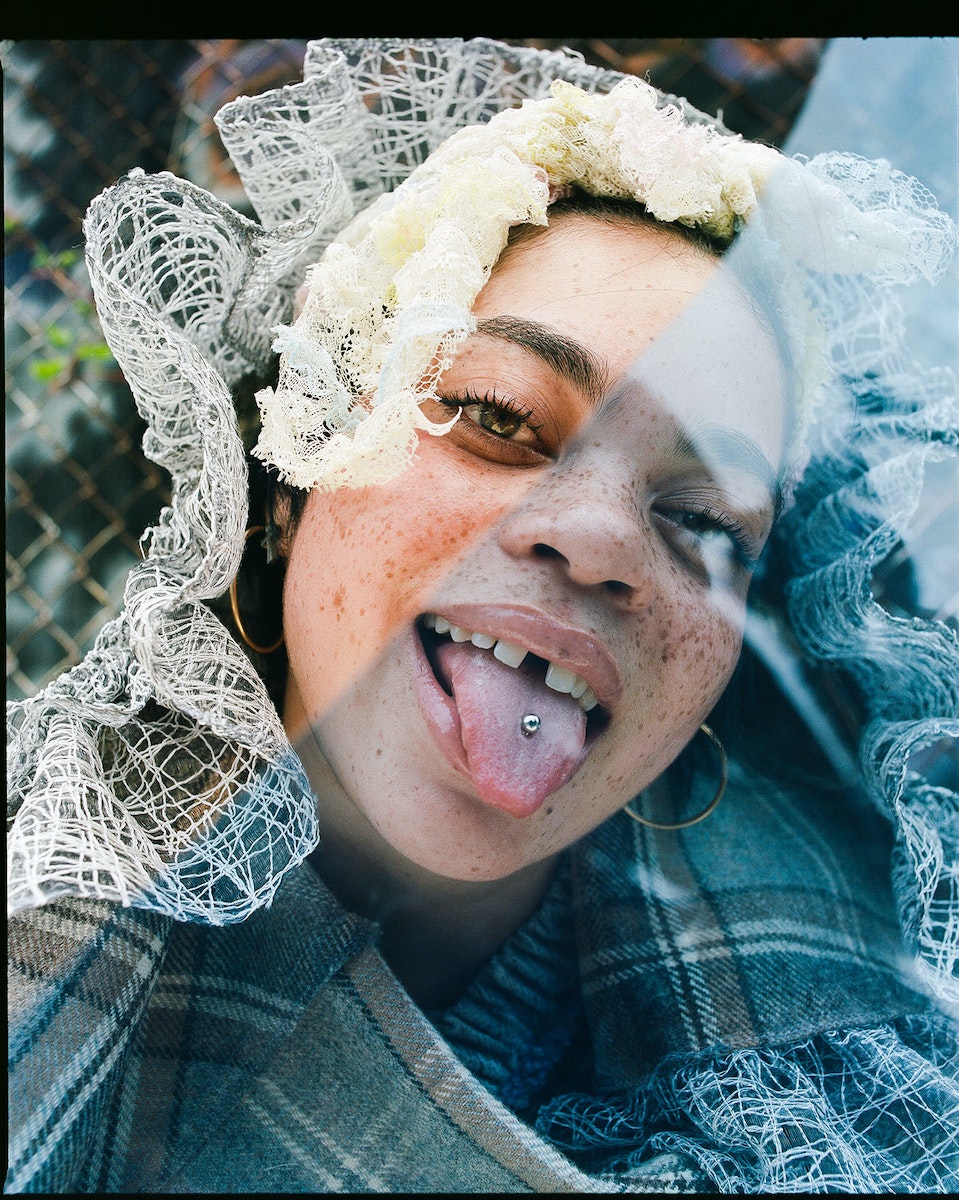 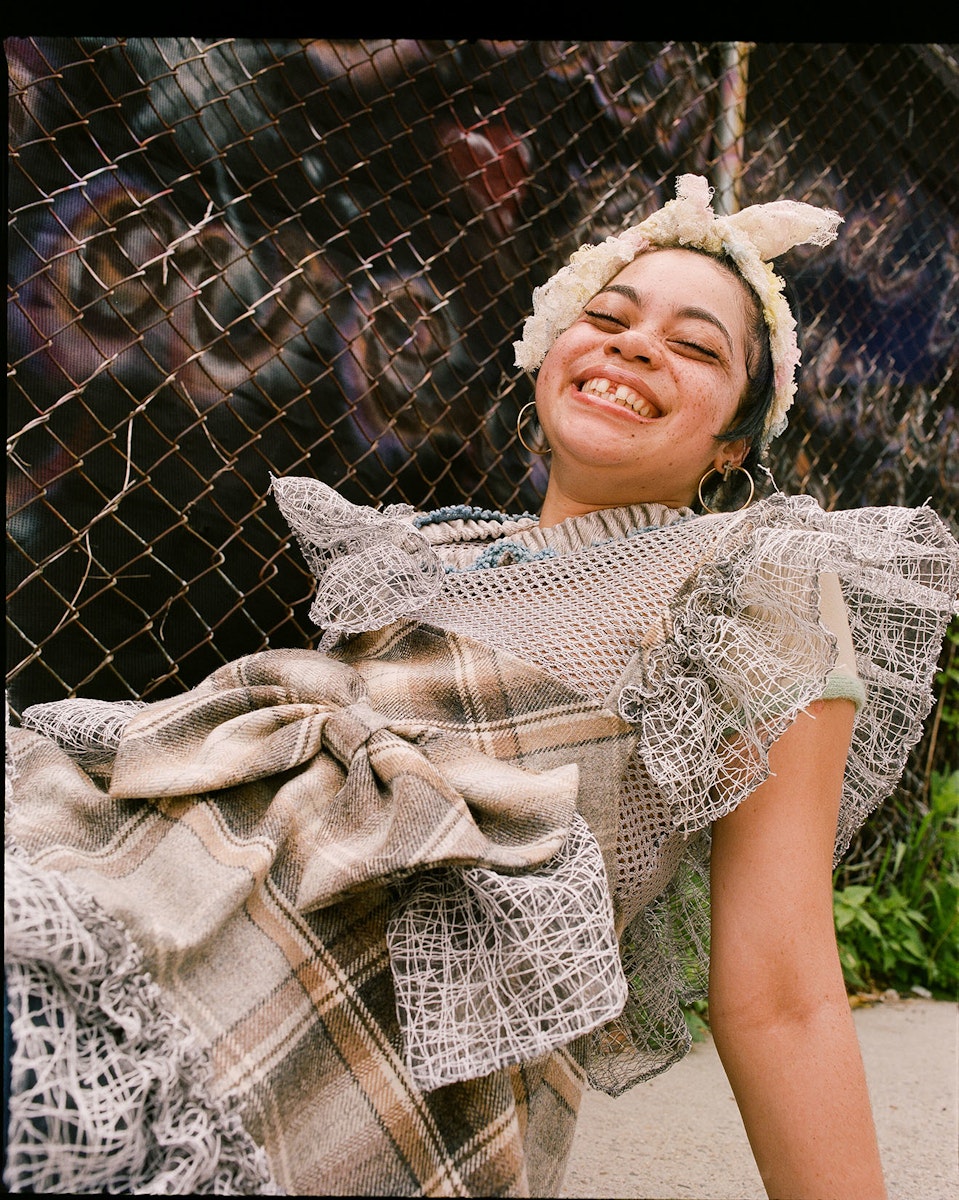 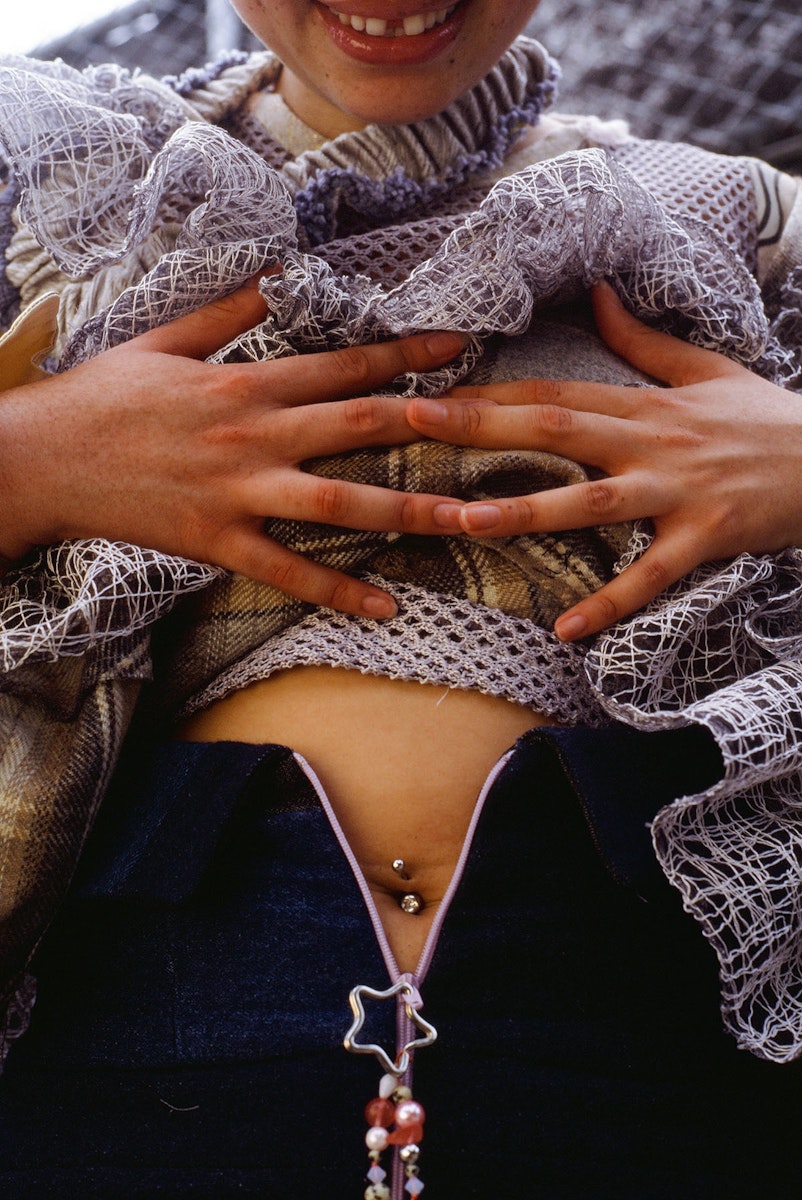 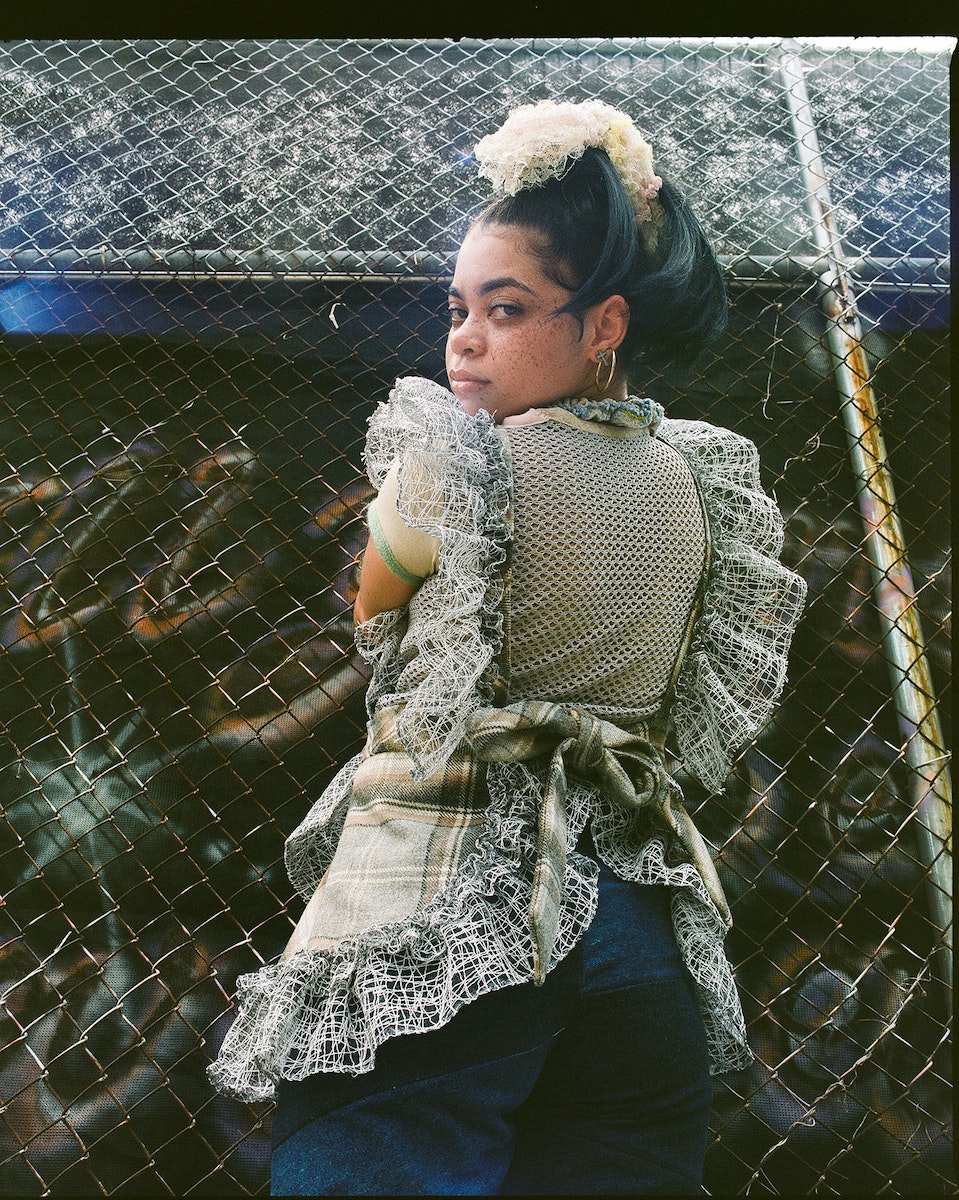 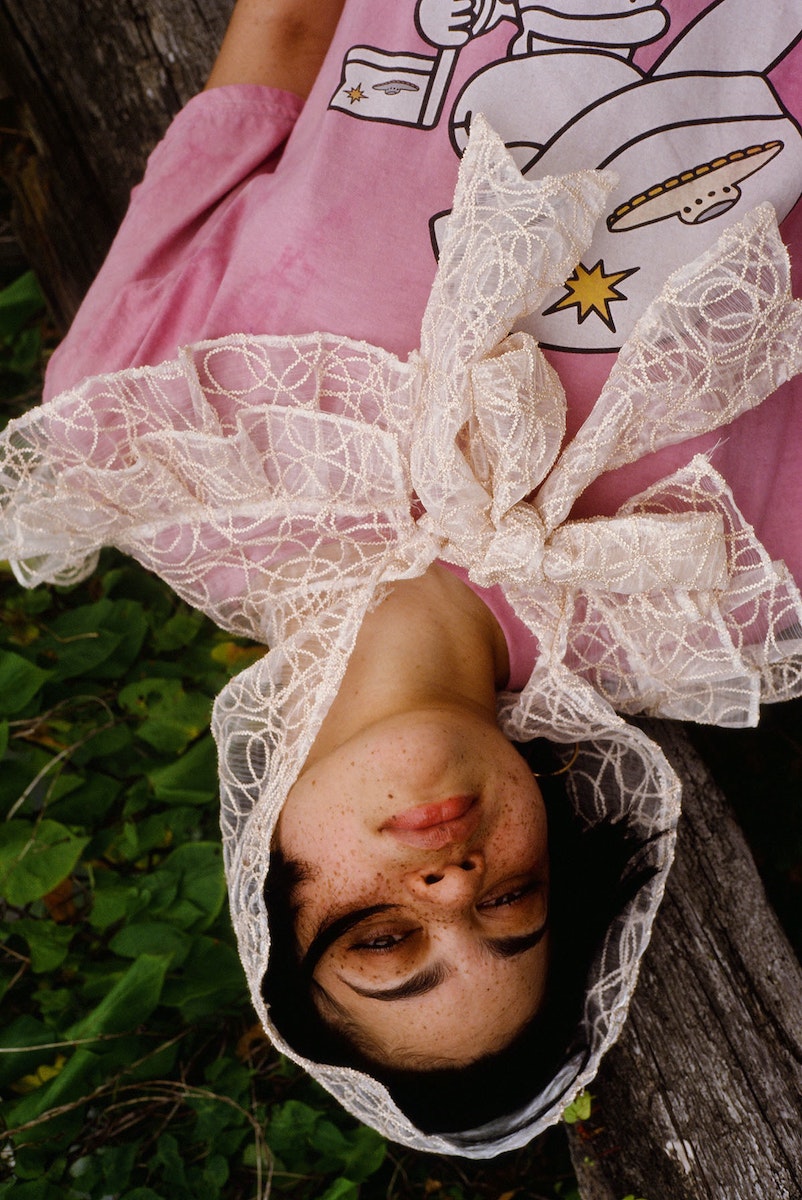 I came up with the name before the brand even exist­ed! It was real­ly fun for me because I love names, so to cre­ate one seemed excit­ing. The movie The Fifth Ele­ment has always been an inspi­ra­tion and so I looked at the char­ac­ter Bruce Willis played – Corbin Dal­las. At first, I thought I could name the brand that, but then I thought it should be more orig­i­nal, so I added Lou – I thought it was good and androgynous-sounding.

How do you ensure each col­lec­tion is as fresh as the last?

I real­ly do try to cre­ate a nar­ra­tive to stick to. Originally I started Lou Dallas because I was feel­ing very frus­trat­ed look­ing at a lot of designer’s col­lec­tions. They’d say​‘oh my ref­er­ences are X Y and Z’ and then I’m look­ing at the col­lec­tion won­der­ing where those ref­er­ences are. I real­ly want­ed the clothes to have a story.

What’s one film you’ve been inspired by?

David Lynch’s Wild at Heart has always been a ref­er­ence point. I love how he mix­es in the sur­re­al, the dream… and then there’s the real­i­ty. He does that very well.

What’s the best thing about being a design­er in New York?

It’s a real­ly great city and I like how many peo­ple I see on a dai­ly basis whether I’m on the sub­way or walk­ing – there’s so much inspi­ra­tion from all the peo­ple I see every day on the street. I also love that it’s a walk­a­ble city.

Your col­lec­tions have been shown in the Ukrain­ian Nation­al Home, a light­ing store and your mum’s friend’s apart­ment…

I usu­al­ly try to find the loca­tion I can get for the cheap­est or free. Show­ing in New York is so expen­sive, that’s the downfall.

What’s the sup­port like for young design­ers in New York?

It’s very con­fus­ing, espe­cial­ly hav­ing not gone to fash­ion school. The biggest hur­dle I’ve had to over­come has been the pro­duc­tion – it was so overwhelming. Now I got into the CFDA Vogue Fund, I’m very curi­ous to see what that will do. I feel like that’s the only thing here to apply to that might help up-and-com­ing brands. Thank god for that!

It’s the kind of girl who thinks her life is a movie. She’s quite bohemi­an, dishev­elled, maybe a lit­tle crum­pled. But I hope to infil­trate Hollywood. I think my whole idea, Lou Dal­las, is a very potent look, so I think the major­i­ty of my con­sumers can buy a hand­ful or small amount of it to wear on top of dress­es or jack­ets to add a little flair, but they don’t have to be head-to-toe Lou Dallas.

If you could only wear one out­fit for the rest of your life what would it be?

I love wear­ing tights, low rise pants and prob­a­bly some kind of mesh top. I’d live in that.