Flee is a bold and beautiful telling of a dark and harrowing real-life story – but also one with relief and uplift in the end.

This Danish film is the animated (that is, cartoon) story of Amin Nawabi, an Afghan refugee. He fled his war-torn homeland with his family in the 1980s, made his way to Moscow, then spent years tangling with corrupt authorities in Russia and attempting to smuggle the family into Europe.

His fears of being discovered, deported and sent home were sickeningly real (and continue to be so: Amin is a pseudonym, and his identity is being kept secret). As a gay teenager, the persecution he’d face in an Afghanistan ruled by the Taliban were unimaginable. Eventually, he made his way to Denmark and to safety. There, in a small, provincial town he made friends with a local 15-year-old, Jonas Poher Rasmussen.

A quarter of a century later, after many years’ discussion and gentle persuasion, Amin – now an academic in Denmark – has allowed Rasmussen to make a film of his life.

On every level, the wait and patience were worth it. Flee premiered at this year’s Sundance, where it won the World Cinema Grand Jury Prize for Documentary. Buoyed by big-hitter producer supporters Riz Ahmed and Nikolaj Coster-Waldau, the film sold for a reported $1 million at the festival to Neon, the studio who also bought the Oscar-winning Parasite.

Calling in from Copenhagen, Rasmussen explains the long road to screen – and his friend’s even longer road to freedom.

How did this film come about?

I grew up in this very small Danish town, and one day Amin showed up. He’d come by himself from Afghanistan and was in foster care with a family just round the corner from where I lived.

And I was, of course, already curious about why and how he’d gotten to Denmark, but he didn’t want to talk about it. So my curiosity about his story was already there back then. Then we’d meet up every morning at the bus stop going to high school, and became very good friends.

This was 25 years ago and you stayed curious. What was the next stage?

I have a background in radio so a few years ago I asked if I could do a radio documentary about his story. And again he said no. But he knew that he would have to tell the story at some point and when he was ready, he would talk to me.

How did the idea to tell his story as an animation come about?

Another few years passed and then, eight years ago, I was invited to a workshop here in Denmark called ANIDOX, where they combined animators and documentary filmmakers. They asked us to develop ideas for animated documentaries, and I thought of his story.

So I called Amin again and he’d decided that he was now ready to share. And he felt that, because with the animation we could make him anonymous, that was the easiest way in. Because it’s really a story about his inward secrets and traumas.

And also with animation, we could make his past come to life – his childhood home, how Afghanistan looked in the ​’80s and Moscow looked in the ​’90s. And because it’s really a story about memory and trauma, with animation we could be more expressive than we could with a camera. The things he had a hard time talking about, we could present them in a more surreal way.

In those instances [in the finished film], it was more about his emotions than being realistic to what happened.

Did it take many hours of interviewing to make him feel comfortable, but to also give you enough material to shape into a feature-length narrative?

Yes, it did. We did 15 or 20 interviews over a span of three or four years. It was a process of first him giving me the broad strokes of his journey from Afghanistan to Denmark. Then we would go deeper and deeper. A lot of it he’d hidden away for years and years, so slowly it came back.

To make him feel safe, I told him we were going to try it out, and he would always have the possibility of backing out if it didn’t feel right for him. That was the case for the first year or so of interviews. We weren’t sure then if it was going to be a film.

What was the process after that?

I transcribed everything, then I organised the material into a script. Then I [acted out] a rough edit where I recorded all the voices of the characters myself. Then we started doing an animatic, which is a really rough version of the film. It’s so expensive to do animation that you have to be really certain that the edit is locked before you start animating. You can’t animate 20 hours of a story then edit afterwards. And I’d never done animation before, so it was very different to what I was used to. But it allowed us to be very precise.

Even in the earliest frames, when we meet the childhood Amin in ​’80s Kabul, there are lovely Easter eggs. We hear A‑ha’s Take on Me, which is probably the most famous animated pop video ever, and we see a colourful kite in the sky, which feels like a nod to the Afghan-set novel and film The Kite Runner. How important was it to make Flee a richly cinematic experience, too?

It was important, but those [elements] really came from the conversations. One of his first memories was that he had this Walkman and he would listen to pop music on it. And I was really surprised that he listened to the same music I listened to: a‑ha, Madonna, Whitney Houston, Roxette. So I thought, if this surprised me, it would also surprise the audience – and create a relationship. You can think back to your own childhood, and see that we and Amin are alike. 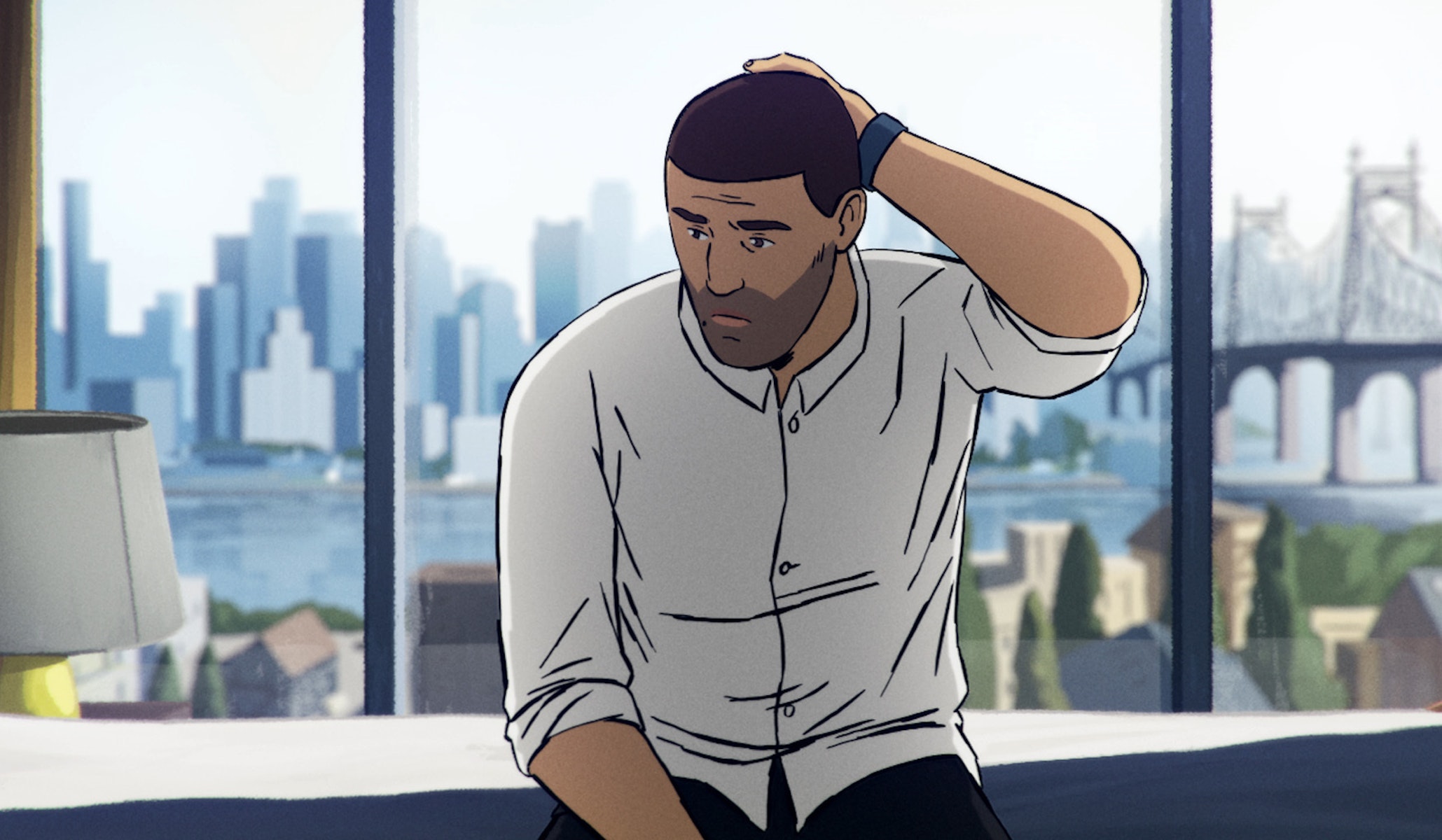 The film has heavyweight executive producers in the shape of the actors Riz Ahmed and Nikolaj Coster-Waldau, and it had great success at Sundance. How does Amin feel now that his story is out in the world, in that context?

It’s definitely overwhelming for him. But the first time he saw it, he was very emotional afterwards – but he told me he didn’t know whether it was because it was a good film or because it was his story. He couldn’t really separate. But when he saw the reception when it premiered at Sundance, when he could see that people could relate to his story, that really meant a lot to him. So he’s very happy.

He feels that refugees are [generally] portrayed in a really one-sided way. And here’s a story about someone who, yes, is a refugee, but he’s also lots of other things. So he becomes more of a human face on a refugee. That makes him really happy.

And you’re still maintaining his anonymity?

Yes. If people knew who he was and he was stopped in the supermarket, they would want to chat to him about it. To him, it’s not something he can small-talk about it. It’s just to keep him comfortable.

What message would you like viewers to take from your film?

I really hope that people relate to his story, even if they’re not refugees or gay. That people will see a human face on someone who is somewhat marginalised in our world, but who shouldn’t be. Being a refugee is not an identity, it’s a circumstance you live through.

Amin is so much more than that. He’s gay, he’s a husband, he’s a homeowner, a pet owner, he’s a professor. We’re trying to put a human face on those 82 million people who are refugees right now.

Flee screens at LFF on Friday 15th, Saturday 16th and Sunday 17th October, and is released theatrically next year.