For any student of downtown New York in the 1980s, Scharf is a principal player. He’s a member of an ensemble cast that also numbers his great friends, fellow artists Jean-Michel Basquiat and Keith Haring, world-famous pop stars and it girls. Warhol bought his early work – inspired by cartoons The Flintstones and The Jetsons – and later did a silkscreen of him. There are pictures of Scharf with Madonna, Tina Chow and Duran Duran, at Club 57 and at Paradise Garage. The kind of pictures that fuel social media. Because in the digital age – and in a pandemic – there’s nothing we fetishise more than an era of spontaneity, a time when you really did have to be there.

In 2021, Scharf is having a moment that goes beyond this role as a kind of creative elder. In December, Artnet called him – at 62 – ​“the hottest new artist on Earth right now”, thanks to Scharf picking up the attentions of mega-collectors, and prices that come in six figures. The same month, Scharf’s collaboration with Kim Jones for Dior Men’s Fall 2021 was shown, causing a small break in the internet when Kim Kardashian posted a selfie of herself in the collection, including a hat with Scharf’s signature characters. It was liked over 2m times. Now, Vaxi Nation, an exhibition of Scharf’s most recent work – partly inspired by the pandemic – opens at the Almine Rech gallery in Paris this month.

Scharf is, quite rightly, enjoying every moment of the Scharfaissance. He loved working with Dior, and seeing his designs rendered in embroidery and beadwork. He is ​“so excited” about the Artnet accolade. And he appreciates younger creatives like Jones finding inspiration in his era. ​“I mean, yeah, we were a fun group,” he laughs. ​“I think we were the last generation before the internet, before even MTV or cable or answering machines or any of that… today everyone has instant access and an instant audience. We were all each other’s audience which allows for more growth and more uninhibitedness because there’s no one caring about what you’re doing.”

Scharf moved from LA to New York in his early twenties to study art, but also to search out his hero, Andy Warhol. Scharf and friends moved Warhol’s soup cans on by taking pop art to the streets and gained the older artist’s endorsement in the process. If Haring had babies and Basquiat had crowns, Scharf’s take was cartoon-focused with a side of space. He had his first show – in 1979 – in the legendary Fiorucci boutique in New York, the one where Madonna supposedly had her first gig. What was it like? ​“It was fantastic… There would be an espresso machine and Brooke Shields over there dancing. Joey Arias, the maitre d’ of the place, pounced on us and we became instant friends and collaborators.”

Success hit in the mid-eighties, and ​“all of a sudden we got all this attention we wanted so bad. It was like ​‘oh my God, here we are… we’re glamorous, and we’re flying here, and we’re doing this’” he remembers. ​“Before everyone died, it was pretty glam,” he adds wryly.

Scharf lived through the HIV/​AIDS epidemic, watching as friends including Haring died from the virus. He sees parallels between then and now, but is quick to point out that, in ​’80s America, the powers that be ignored a disease that made them uncomfortable. Ronald Reagan, the then-president, didn’t utter the word ​‘AIDS’ until 1985, by which point more than 12,000 people had died. ​“It was just our own community, something we had to deal with completely on our own which was devastating,” says Scharf. ​“It was seen as only for drug addicts and gay people. It was pretty hard times.”

Basquiat and Haring died within 18 months of each other when Scharf was in his early thirties. Over the now 30-odd years since then, Scharf has watched as they have become lionised. ​“It’s interesting for me to see them in this exalted way… I’m happy to see it because I feel they deserve it, but it’s also overwhelming. I went across the street from where I have my studio and there’s this reggae store. They had this little framed picture of Jean-Michel there and I said to the guy ​‘I’ve seen him naked’. It was really funny but at the same time now I am a huge celebrity because I knew Jean-Michel.” Their deaths are still raw. ​“You get so mad, ​’why did they have to die, they were so amazing’. I don’t understand it, I really don’t,” he says. ​“Everyone asks ​‘what would they be doing today?’ And I’m like ​‘yeah, that’s a great question. I would love to see it.’” 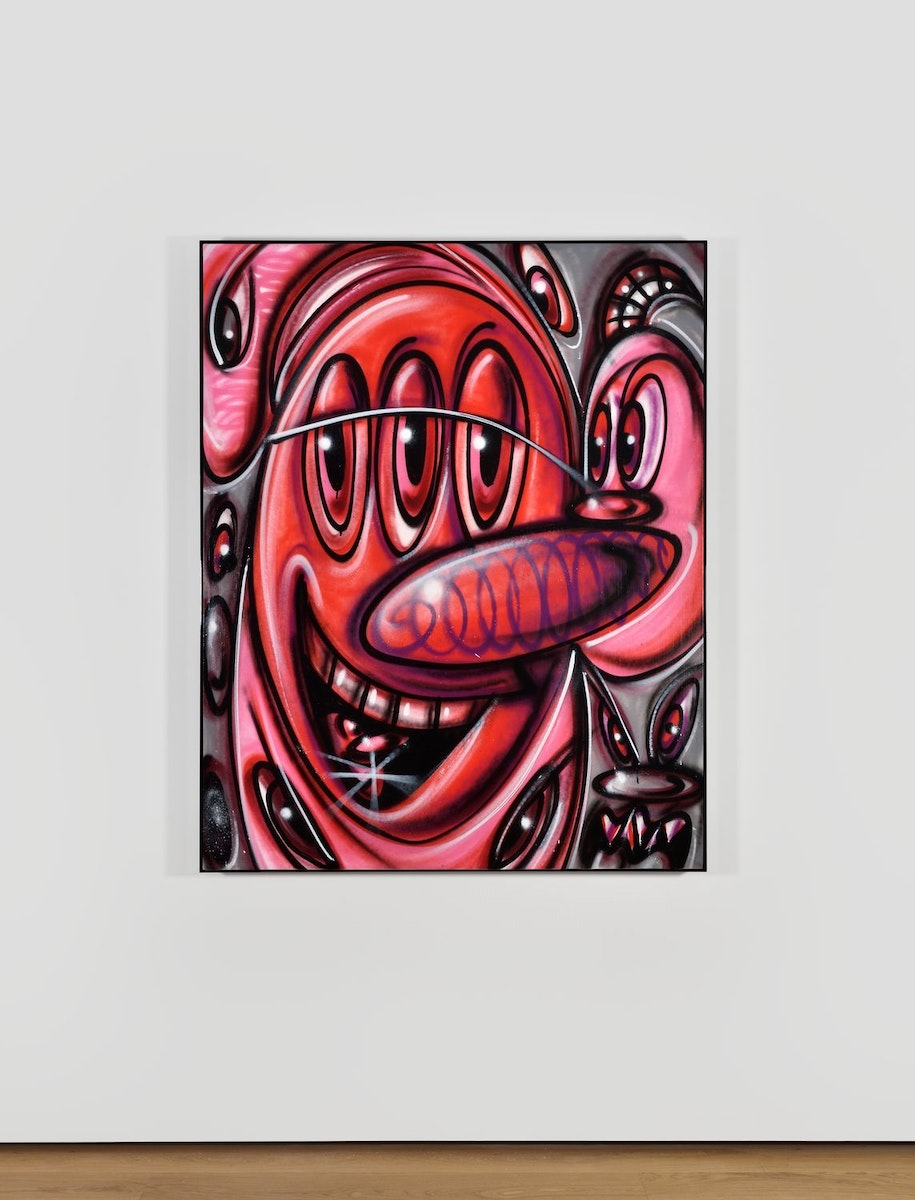 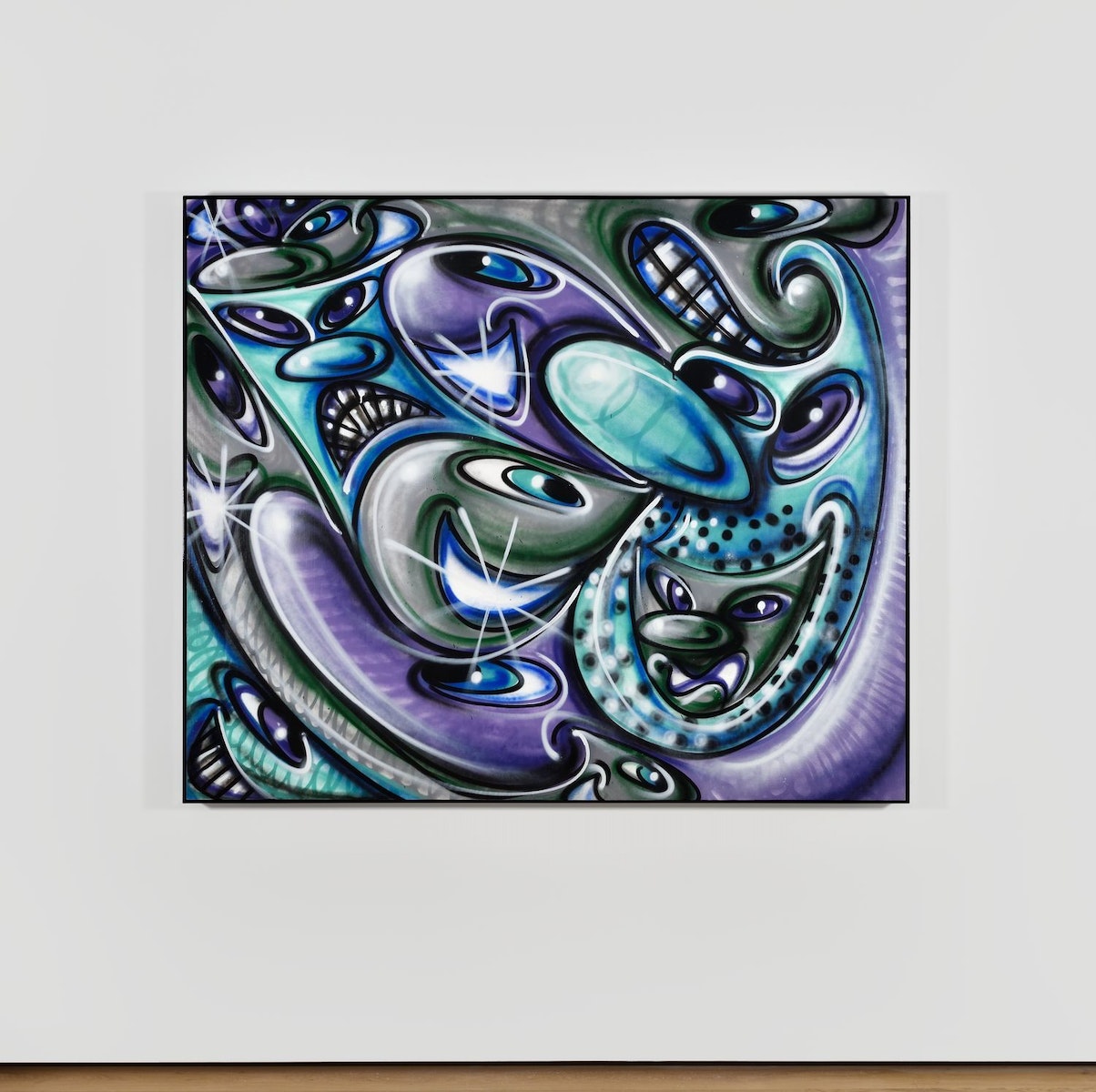 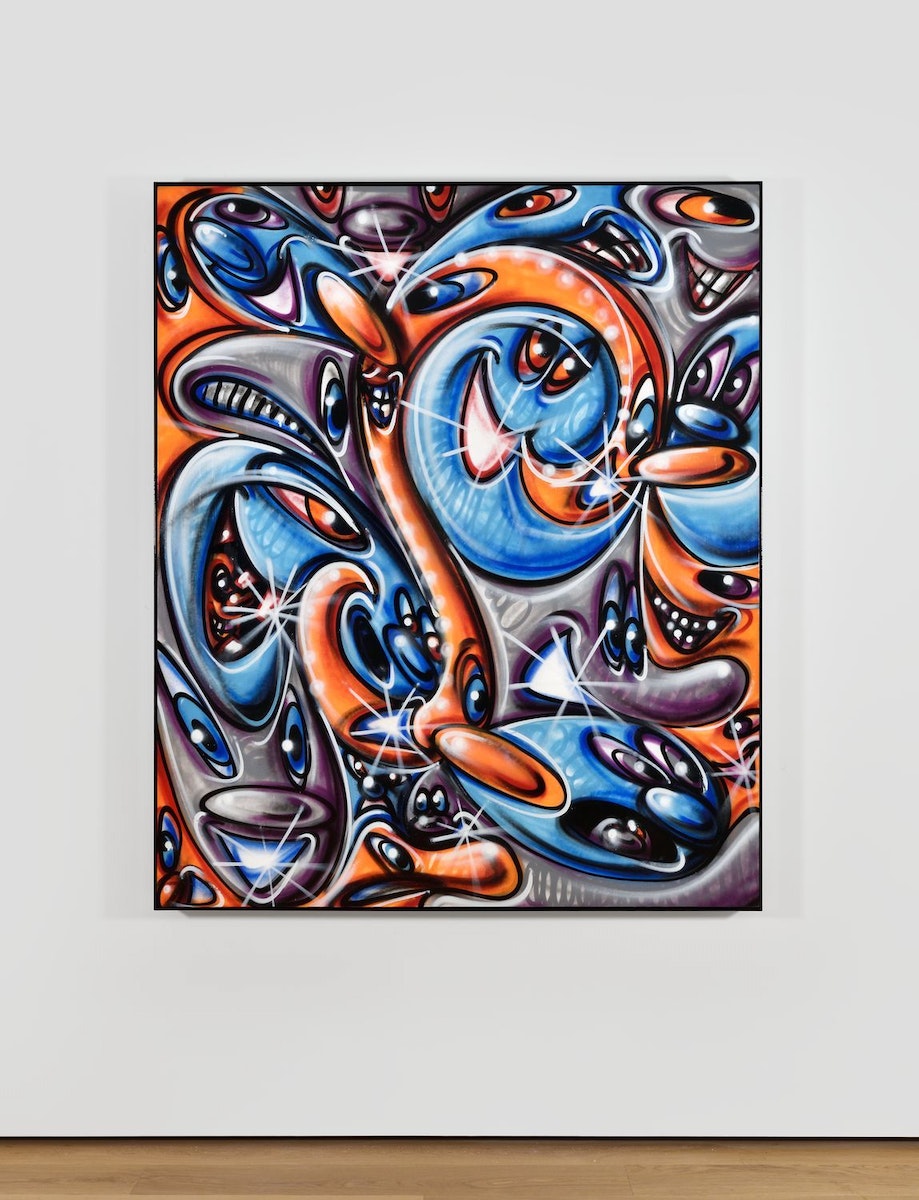 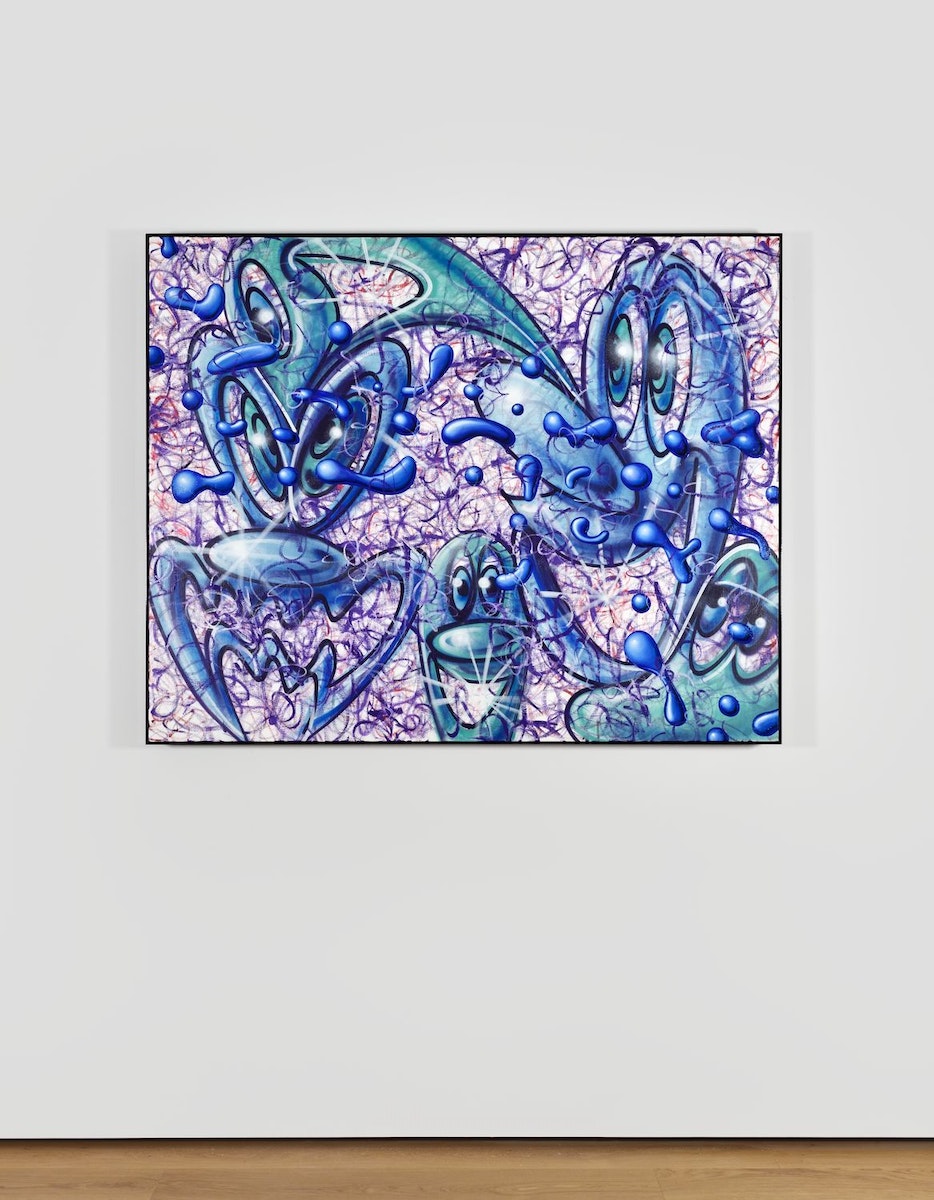 Scharf, of course, continued making art. The cartoon lover eventually became the cartoon maker – working on a series, The Groovenians, for Cartoon Network in 2002. He recruited famous names like Dennis Hopper and RuPaul to lend voices, and the B‑52s and Devo to the soundtrack, he ended up working so hard he got into debt only for Cartoon Network to can the series after the pilot. ​“It was like having a child, giving birth, suckling them and throwing them in the gutter and having to drive away,” he says.

Being a cheerful soul, though, Scharf managed to find an upside. In fact, this could be seen as the beginning of the Scharfaissance. ​“It made me realise how great it is to be an artist and a painter,” he says. ​“I don’t need anyone’s OK to do anything.”

See Karbomz, a project where Scharf spray-paints cars for members of the public, for free. It snowballed after he painted a fan’s car in 2012, and posted it on Instagram. He now does two every Friday, and has a waiting list. ​“There are almost 300… all over the world, Paris, Korea, mostly the United States… It’s like it’s its own thing. There are so many things about it that I love, having moving murals all over the city every day advertising for me, and also [bringing a] spark to boring traffic.”

Scharf says the art world (of which he is now a paid-up member) doesn’t really know what to do with Karbomz ​“because there is no money attached”. But, for him, it goes full circle. ​“It’s part of what I learnt back in the old days with Keith and Jean-Michel, doing things in the street and for public consumption,” he says. ​“The art world thinks that anything the public likes is dumbing it down for the masses. I think differently. I think let’s elevate the masses, let’s bring everybody up.”