Finally, a glimmer of joy and positivity for autumn 2020: Rocks, a heartwarming and truly authentic coming-of-age story set in the heart of east London.

Directed by Sarah Gavron (Brick Lane, Suffragette), the film centres on the world of 15-year-old Olushola Joy Omotoso – aka Rocks – and her seven-year old brother Emmanuel.

Her teenage life is, to say the least, turbulent. She’s battling fights and disruption at school, drifting friendships and the sudden disappearance of her single-parent mother. As she’s forced to go on the run with her brother from social services, Rocks takes you on a gut-wrenching rollercoaster, showcasing the challenges of sudden and enforced early adulthood.

Writers Theresa Ikoko and Claire Wilson went on a city-wide search across London to find their leads, supported by community workers and consultants. Conducting acting workshops for 12 months at different schools, they were intent on harnessing the potential and energy of first-time actors.

All along the filmmaking process, Gavron explains, their methods were anything but conventional. ​“Right from the beginning we had these two writers on board, Claire and Theresa – she’s in her twenties and British Nigerian, so very close to the world the girls grew up in in Hackney. And it was their first film.” 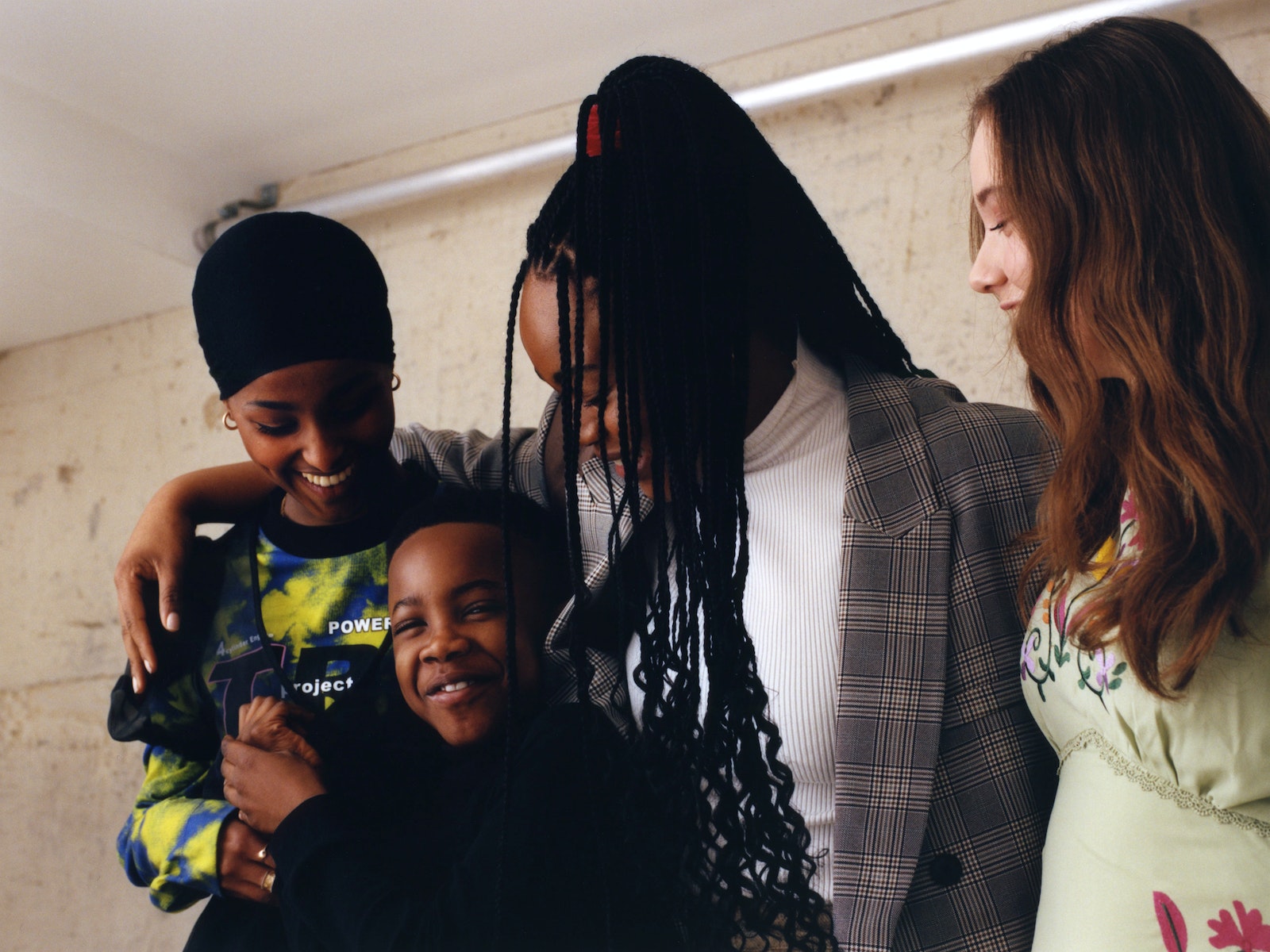 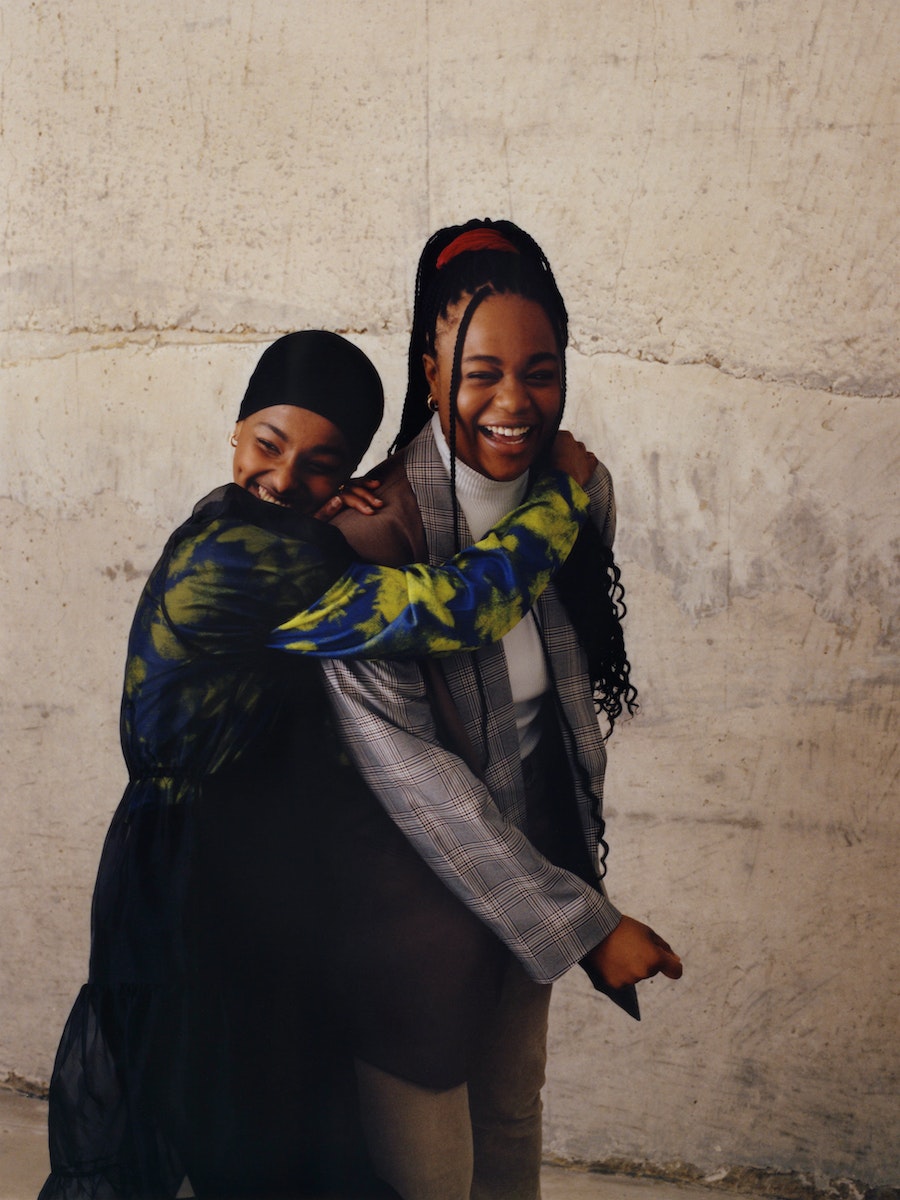 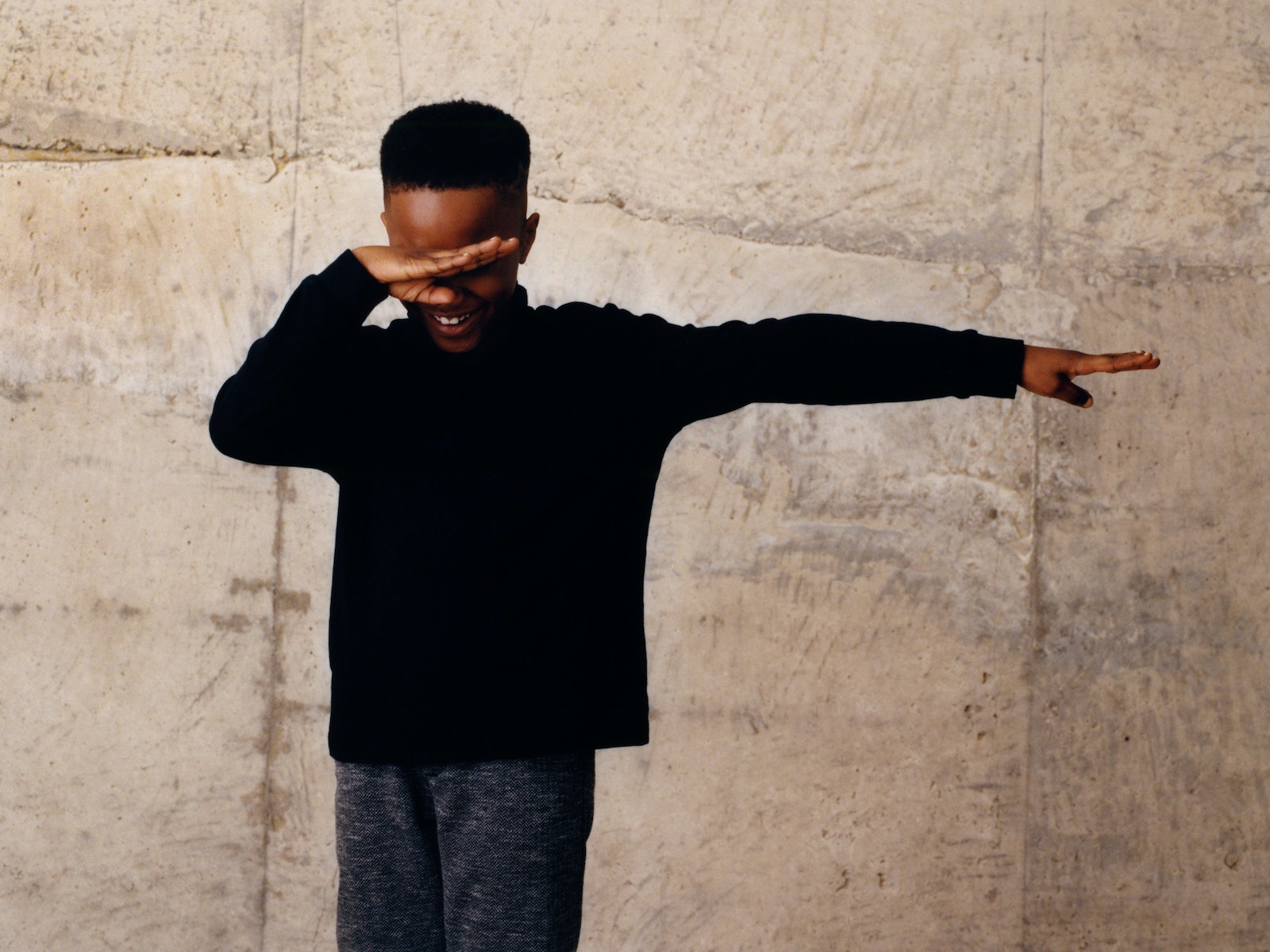 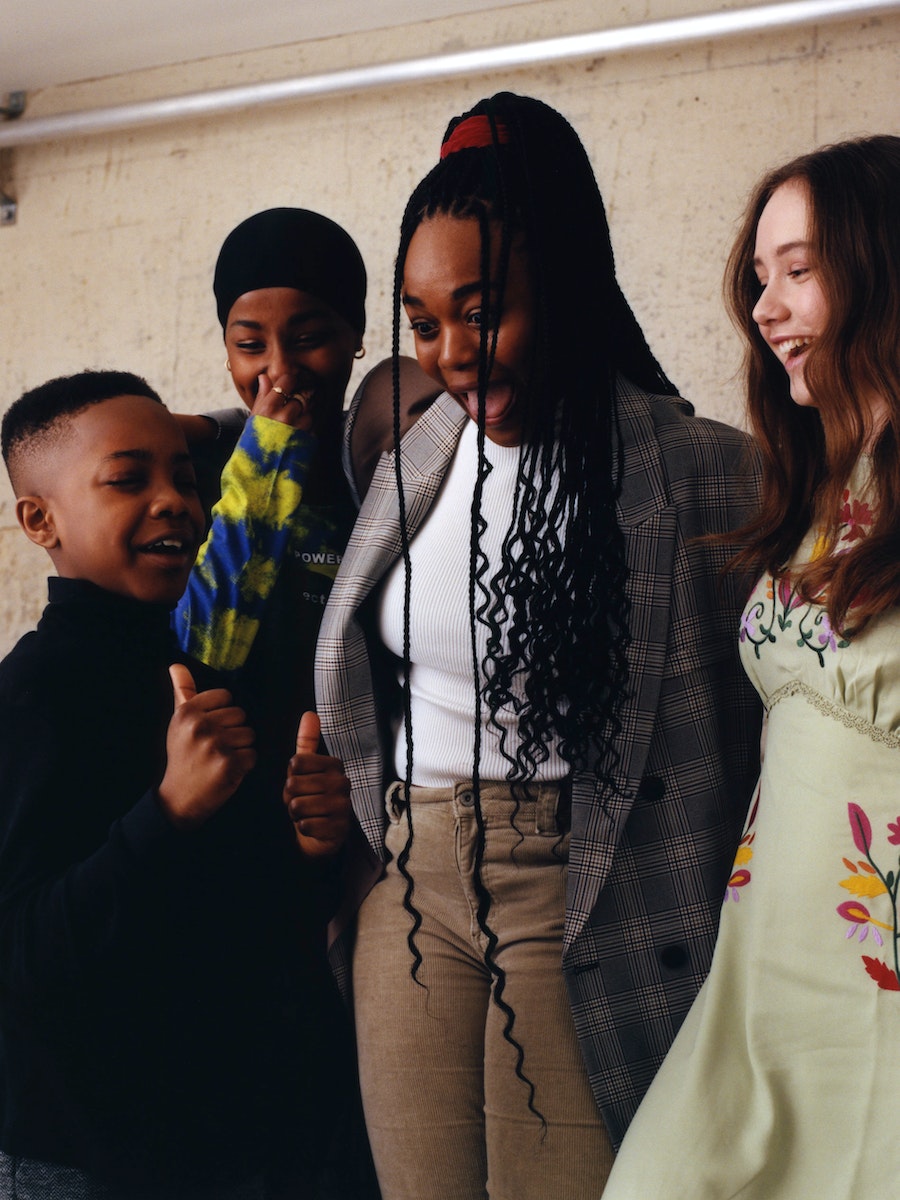 The development of the narrative was equally empowering and innovative. ​“In the workshops, we were researching and getting to know the girls, and they were improvising – and then they came up with the story idea. Theresa said: ​‘I’ve got something I’ve been working on for quite a long time, which is a love letter to my sister – why don’t I bring that to it?’ And we could all input like that.”

Then, even as shooting began, instead of being given lines, the cast were given the freedom to create their own dialogue and movements. As the director says: ​“We didn’t say: ​‘Action!’”

Meanwhile, behind the scenes, the team were equally intent on challenging film industry norms: 75 per cent of the production team were female. ​“I think we only had one male gaffer,” says Gavron. ​“Normally it’s literally about 10 per cent women but I pushed for lots of women as heads of departments.”

And how did all this impact on the young east London women in front of the camera? We asked lead actor Bukky Bakray and her castmates Kosar Ali, Ruby Stokes and D’angelou Osei Kissiedu.

What made you want to get into acting?

Acting kinda came to us, rather than me trying to seek the career. I didn’t really think it was what I was aiming for, until the opportunity came when Sarah [Gavron] and [casting director] Lucy [Pardee] were coming into our schools for research and they invited us to audition. We done our auditioning in a workshop format and as it was starting to get a bit more serious in my head I was thinking: ​“This actually could happen.”

How would you describe your character?

Rocks is a very strong person – she tries to be strong for the people around her. You can tell she is very mature for her age, and she shouldn’t have to be. I think that she loves her friends a lot. I wouldn’t say she is like the mother figure because she wants to be that – it’s because she has to be. That’s all she knows. The love that she has for her brother is crazy, like, I cannot articulate how much.

What was it like taking on such a serious and emotional role?

It was difficult to get myself into that vulnerable place, but the cast and crew made me feel safe. I’m so used to hiding my emotions. To cry and stuff is embarrassing, especially how I grew up – I’m the only girl in my house. Having to do that on set, with quite a few people watching you, you feel naked. But the people around me gave me the mad reassurance I needed.

How did you cry on cue?

I didn’t get it at first. Sarah gave me a tear stick – early on she put it on and me and Kosar would be like, screaming, because it’s basically like Vicks! But I was like: ​“Nah, I don’t wanna use this.” I didn’t think that was what acting was, I thought everything was genuine emotion.

What’s the most surreal experience you’ve had since filming?

Meeting Daniel Kaluuya was mad! And going to the Toronto Film Festival was crazy. I was just on the plane and thinking to myself: ​“This is such a blessing, this is amazing”. Especially with the rest of the girls, us going as a group of six.

Yeah, I literally go to Kosar’s house all the time. Three days a week!

There is an organisation called Bridge that was created by some of the ladies from Rocks. It helps young child actors who act in stuff like this but they’re not really supported – their careers just go down from there. So we do workshops to keep our creative juices flowing. Anu (Henriques, Associate Director of Rocks), Warda (Mohammed, Production Assistant on Rocks), Axa (Hynes, the Widening Participation Lead at Rada), Jessica (Straker, casting assistant), Lucy (Pardee, casting director) and Theresa and Claire are creating Bridge to help bridge us into the industry and not be forgotten. They’re reminding us why we’re here and what we want to do – and they’re making us not forget that representation is really important.

Yeah, yeah, that’s right. I always had upper body strength. Instead of going down the pole in the playground I went up it. And then my mum was like: ​“Why don’t you go and audition?” And at the audition you get to climb on the [circus] tents, you climb up a rope, and I was like: ​“Right, this is where my expertise lies, bring it on!”

Is it right that you were one of the few people with prior acting experience?

Yeah, I did a few bits and bobs here and there. I went to BRIT school and I was originally part of YATI [Young Actors Theatre Islington].

Tell us about your character, Agnes.

We created a backstory for how Agnes and Rocks knew each other. They were friends from primary school, and then they kind of drifted apart in secondary. Agnes is always a friend on the edge of a friendship group and so she kind of drifts.

What was your experience on set?

We just got on so well. When we all met each other, it was solidified, we just all vibed with each other so much. We’d dance on set, we’d make jokes, we’d be singing with each other. I used to hate singing, I don’t like my voice, then the other girls would just be singing all the time, and I just found myself singing with them. Everyone is so encouraging of one another and supportive. And then the crew around us were super nurturing as well, which is super special.

Why do you think people should go see Rocks?

There is someone for everyone in the film. You can go and watch it and it is an exact representation of life in London, growing up in east London and schooling.

How old were you when you were filming?

I was about seven-and-a-half, maybe.

Had you done any acting before?

No, this is my very first time.

How did you find it?

I thought there was going to be scripts, but it wasn’t that kind of film that had scripts. I’ve never seen a film that they don’t use scripts.

I was in some place, I don’t know where. I got two auditions I think and, yeah, I got picked out of all the little boys. Everyone in the school was speaking to me lots of times, asking me questions about the film.

What was your reaction when you found out you’d been cast?

My reaction was actually kind of excited, because I have never done anything exciting like this. ​’Cause I have always wanted to be an actor.

I don’t really remember because it was actually two years ago! But I did have one favourite scene – it was at Creams, but they couldn’t put it in the film. I could eat bubble-gum ice cream with marshmallows and sprinkles. I got a sugar rush!

Was it difficult for you to do the sad scenes?

You did them really well though

How were you discovered?

I was in Year 8 and my drama teacher was like: ​“There’s gonna be a workshop with all girls aged 11, so just come down and have some fun, innit, and start acting.” And I was like: ​“Yeah, nah, sorry, that’s not for me innit, I’m not gonna do that.” But my friends encouraged me. It was like improvisation and collaborations. I kept going, and [the audition groups] just kept getting smaller and smaller, less girls. Then when I met the rest of the cast we just vibed. It was really weird – it was like we already knew each other.

Where you all cast from different schools?

All from different schools, yeah. In total it was, like, 1,500 girls, over two years.

Can you describe your character, Sumaya?

Sumaya is a very warm-hearted type of person – she puts others before herself. She’s a very caring person, as you see through her friendship with Rocks. She’s there for her, you know what I mean? She puts everything to the side, she wants what’s best for them, but sometimes she goes above and beyond. That’s what I love about her.

What drew you to the role?

The thing is with our characters, we all have something in common with them. They weren’t already set before we auditioned, we formed them.

Were there any challenges you faced getting into character?

Sometimes. Sumaya is a very caring person, she puts her heart out and [is] vulnerable – that’s a bit awkward, innit? Especially at 13, your pride is so strong and you don’t want to look wet. Sometimes I would just be like, ​“I don’t want to do it”, but Sarah and Theresa would just remind you why you are here and that you can do it. Sometimes I was just overthinking it.

Why should people check out Rocks?

I feel like a lot of people my age are talented and intelligent and bringing new and original ideas, but they don’t see a representation of themselves on screen. Two years ago, before Rocks, I thought acting was never an option because we didn’t see people like us and we never had the opportunities. So I want people to watch Rocks and see themselves and go: ​“Yeah, right, I can do that.”

Rocks is released in selected UK cinemas from Friday 18 September