Scott King is an artist, a Brit mag legend, and a really-cool-bloke who lives in leafy Islington, north London.

From the early 1990s his work has been a recognisable icon of Great British Design, whether from his tenure as art director of i‑D mid-decade, his block-coloured posters telling you to piss off (often proudly held up these days by his young daughter on Instagram) all the way up to his defining work at do-it-your-fucking-self cultural bible, Sleazenation, where he was art director from 2001 – 2003.

King was proper outré. On one of his Sleaze covers, from May 2001, a copper wears a balaclava with ​“BOMB CULTURE” written boldly on the side – a purposefully controversial cover he admits he hoped would get pulled from newsstands. A month later, there was feature Epidemic: a fashion story. Probably one of the greatest fashion editorials of all time (honest), it features football hooligans dressed – and properly credited – in sports casuals, photographed while wrecking havoc at a match in real time.

Earlier that year, there was Stepford Lives, photographed by Daniel Stier and written by Jacques Peretti. It took the mundanities of British suburbia and turned it into a fantasy soap opera, viz: ​“Sue gets migraines that last for days. She takes to her bed and draws the curtains. Graham hasn’t touched her in years.” 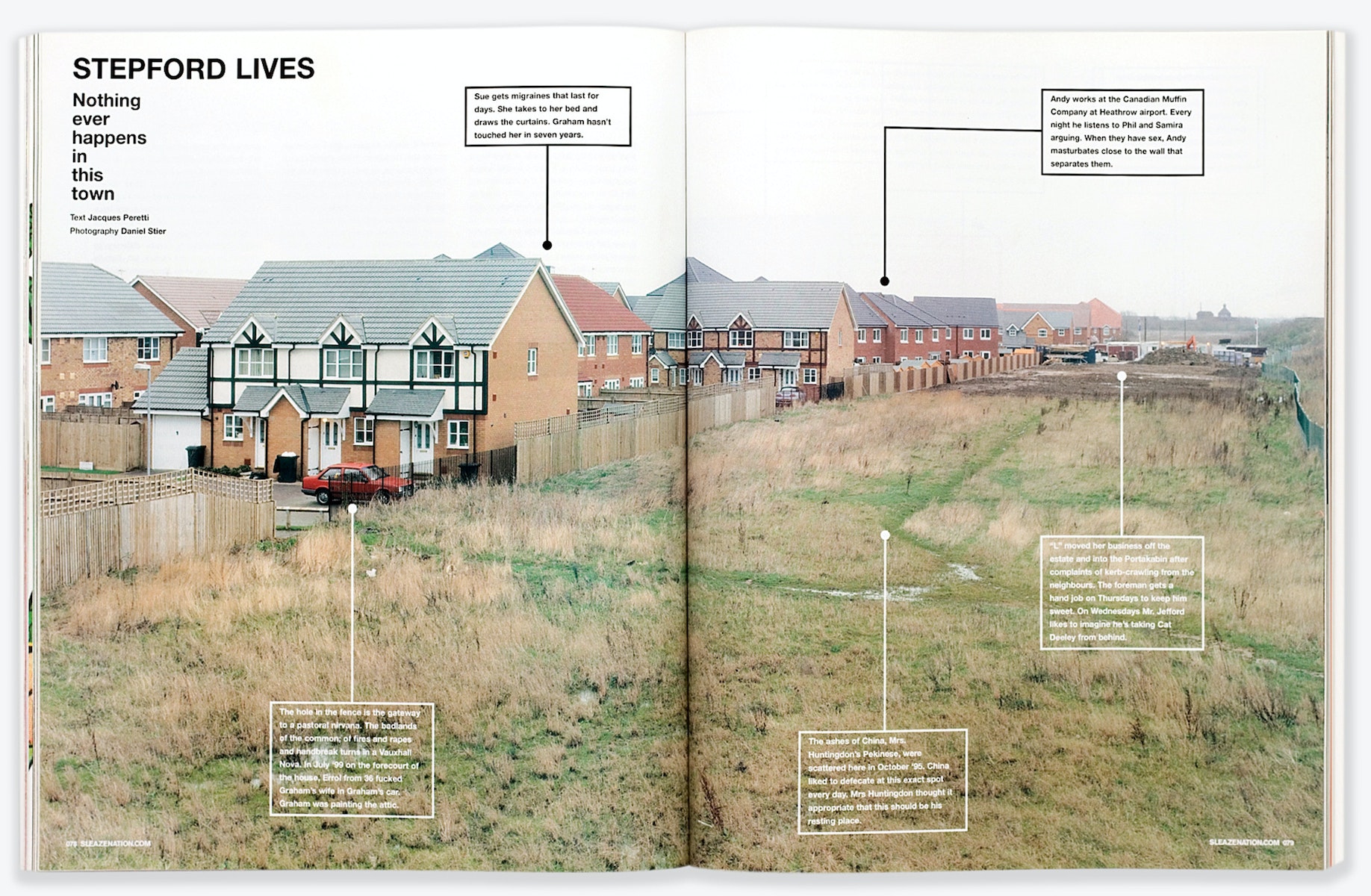 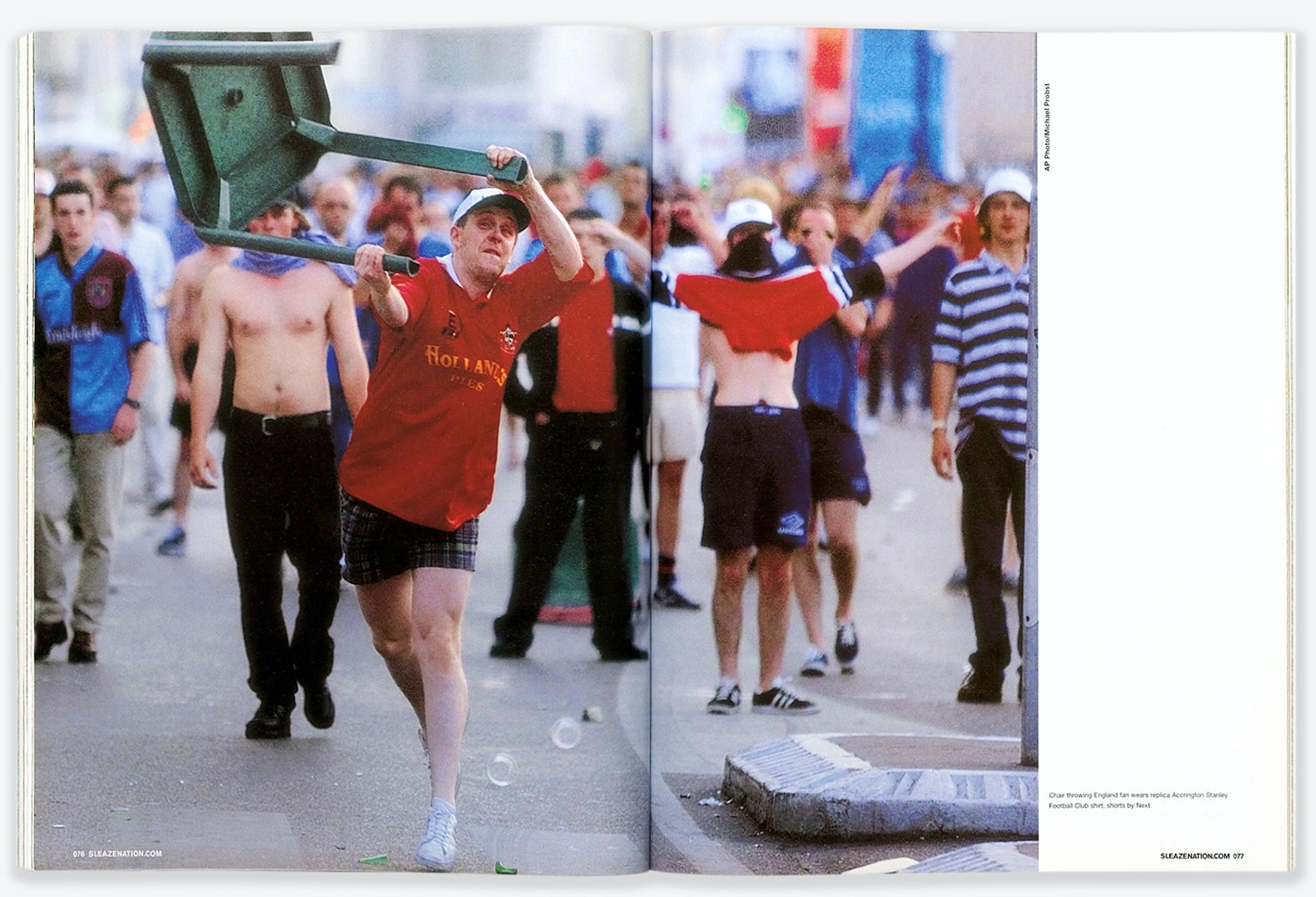 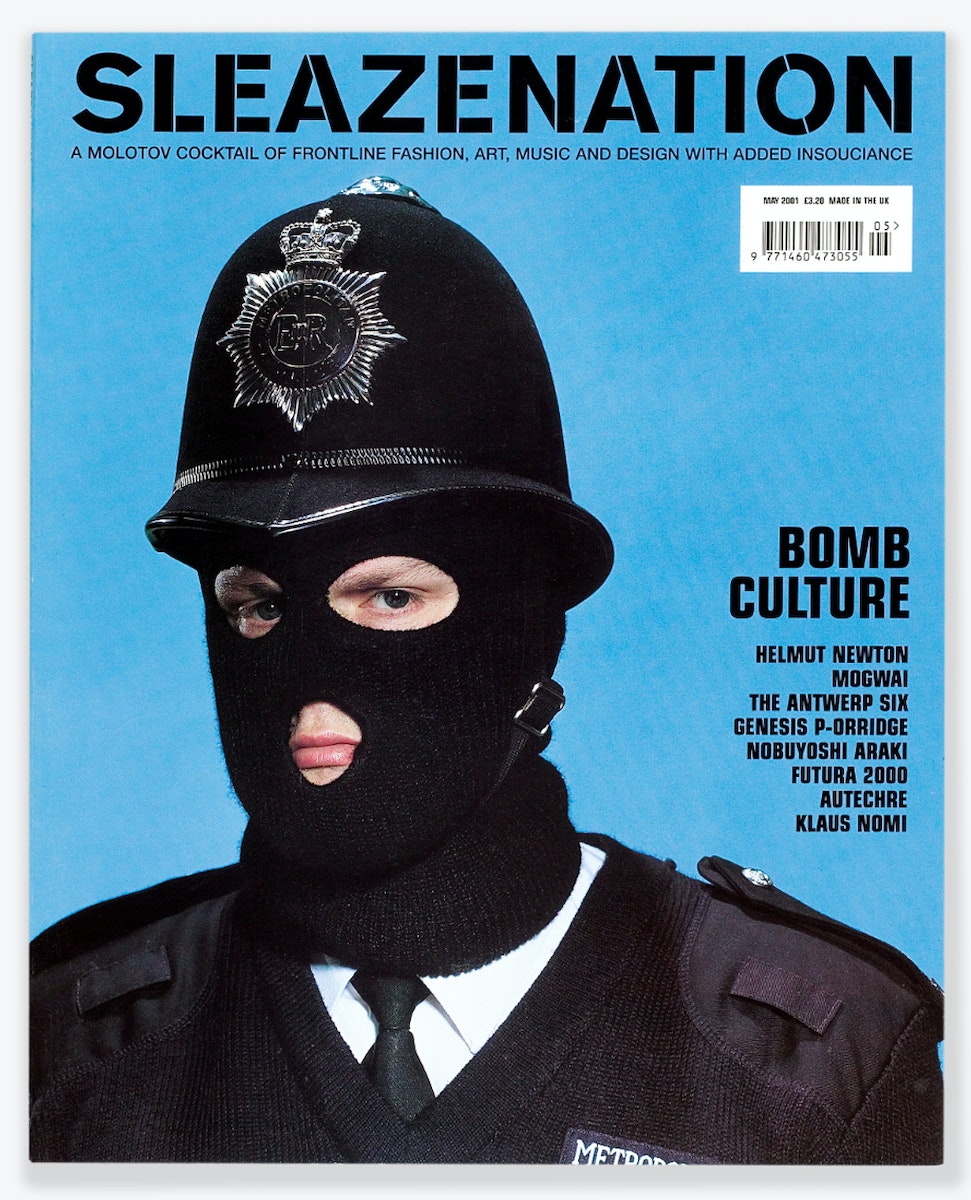 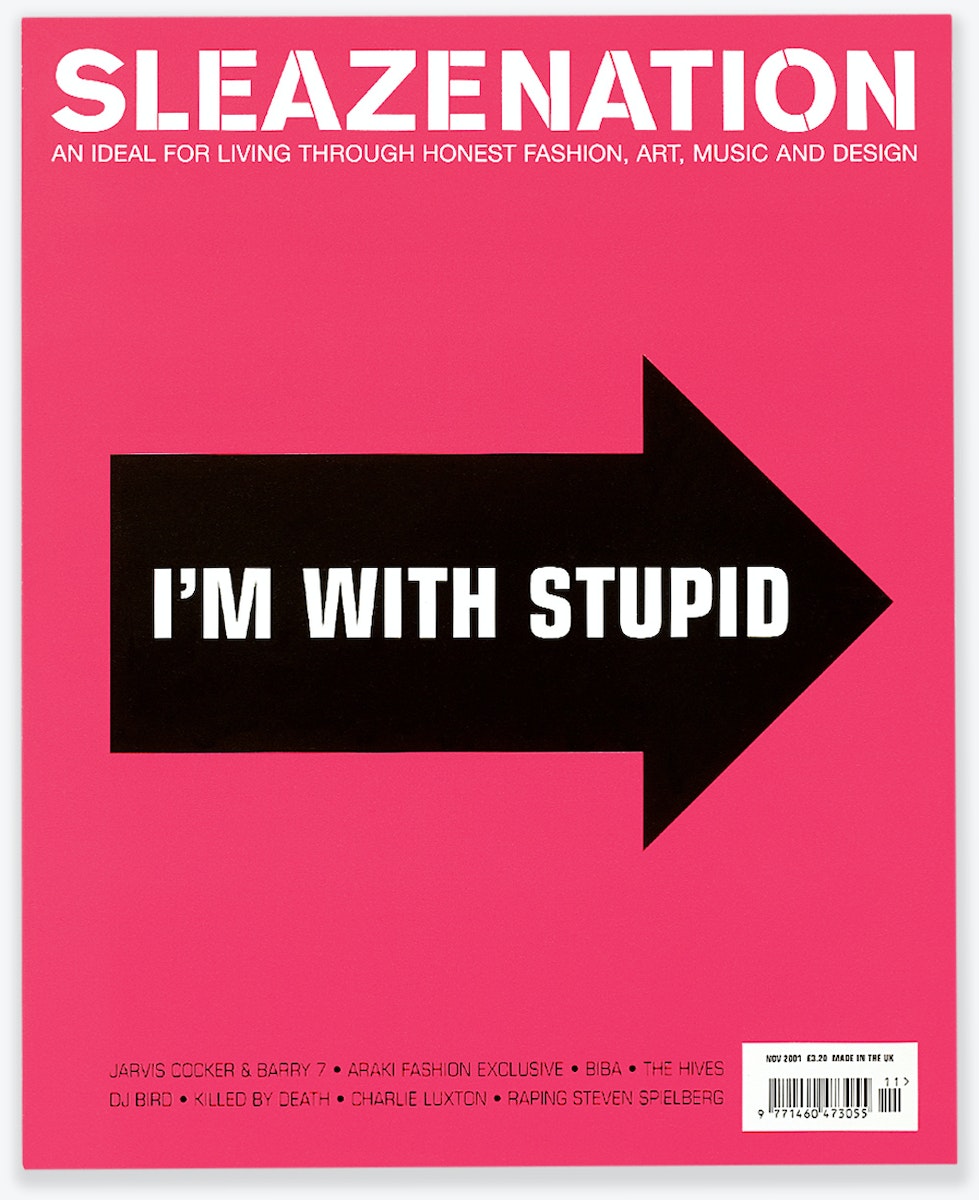 Of his many covers, though, one – for me, anyway – is a standout, and it happened to be his first issue for Sleaze, published in May 2001. Bright red, it features the coverlines: ​“Militant Pop, Do you believe in revolution?” Sat above it is Cher dressed as Marxist revolutionary Che Guevera. Put two and two together, and Cher Guevara is one of many King masterstrokes. Or so it seemed.

“It actually came about through a mispronunciation between my gallerist at the time, Gregorio Magnani, and Stefan Kalmár [director of the ICA since 2016],” he tells me at his home, sipping a coffee in shorts and a T‑shirt. We got talking about Cher after I went for a slash and noticed the popstar hanging outside his loo, framed and pristine.

“One is Italian, the other is German, so it became Cher Guevara – they accidentally thought of it…

“It’s one of my great regrets, actually.”

“I lazily made it into a Warhol-esque screenprint on a great big canvas, and it wasn’t meant to ironically echo Warhol or anything – it just looked lazy. But it did make a really good T‑shirt.” And one of the defining magazine covers of the turn of the millennium.

Charles Saatchi was equally impressed. In 2008 the money-bags collector commissioned King to make a piece fit for his eponymous gallery. A hot pink rendition of Cher Guevara, the 52-year-old artist reckons now it would’ve been made better as a giant, 25-foot tall T‑shirt hanging on the gallery’s white walls.

“Now that would’ve been cool,” King says with a smile.

Over lockdown this February he admits, like many others, to feeling a bit ropey. As a freelance artist, art director and designer, he was finding it tricky to get his head stuck into one project. Scribbling here, drawing there, he was bouncing between endless ideas but couldn’t muster the bother to finish – or start – any of it.

Then, one wintry Wednesday afternoon, sat in his sitting room looking out of the window at the hail, King thought to himself: what the fuck am I doing?

“I had no work on, didn’t have that thing where somebody needed me to do something, I was trying to write this play yet again,” he begins, a glancing reference to a written piece he’s been kicking around for years.

Sleazenation, February 2001: 'I want to work it out', photography and styling: Wolfgang Tillmans.

That’s when he came up with the concept of Debrism. It’s an idea he’s chewed on for a while that has now been immortalised into The Debrist Manifesto. In simple terms, it’s a guide, set down in a bound book, for those lost souls trying to find their way in life through an endless – but endlessly unresolved – question: ​“What actually is it that I do?”

“I’ve never quite known, and I’m always trying to find my way, which is what The Debrist Manifesto is,” King adds. ​“So it’s setting out a series of rules for those people who, like me, have too many channels into which they might go.”

A few of those rules are as follows:

1) Never finish anything. That is the first and most important rule of Debrism.

2) If you do finish something – disown it. Spend years thinking about how much better you could have done it.

3). If someone says, ​“but that was perfect!”, look into that person’s reasons for saying this. Think carefully about that person, then dismiss that person’s opinion.

“What the Manifesto came about from is this kind of over-thought: too many ideas and yet not enough outlets or enough commitment on my part,” King admits. ​“It’s very easy to sit and think, ​‘this would be a great idea for a novel’, and to then write a list of things to do. But it’s quite hard to spend a year sitting and writing it, and believing in it.”

The Manifesto only saw the light of day because King’s mates, Richard Turley and Lucas Mascatello – co-founders of anarchic NYC culture newspaper Civilization – asked him to contribute, which then ended up becoming the most recent issue of the publication (out now!). And that, in itself, is bloody Debrist. 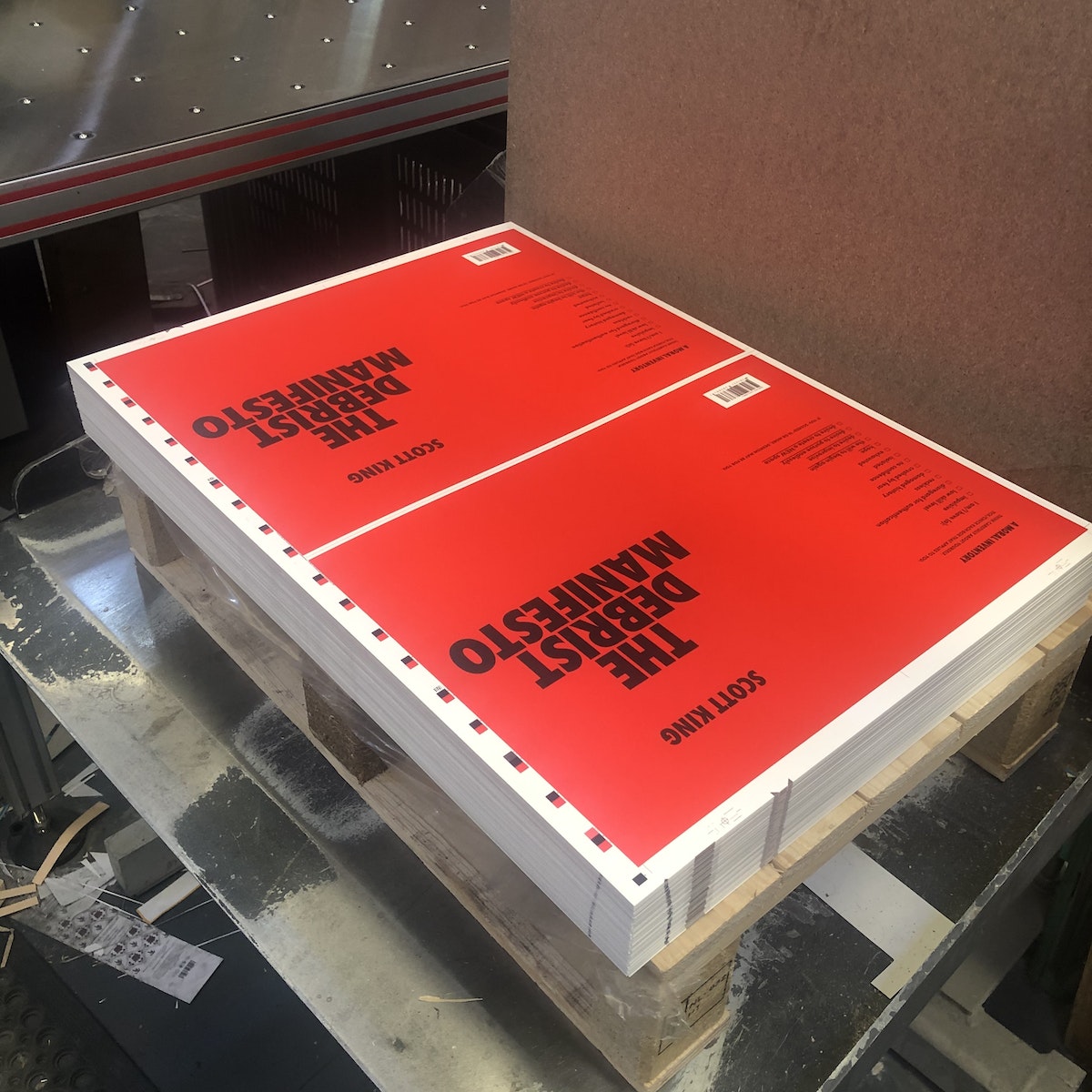 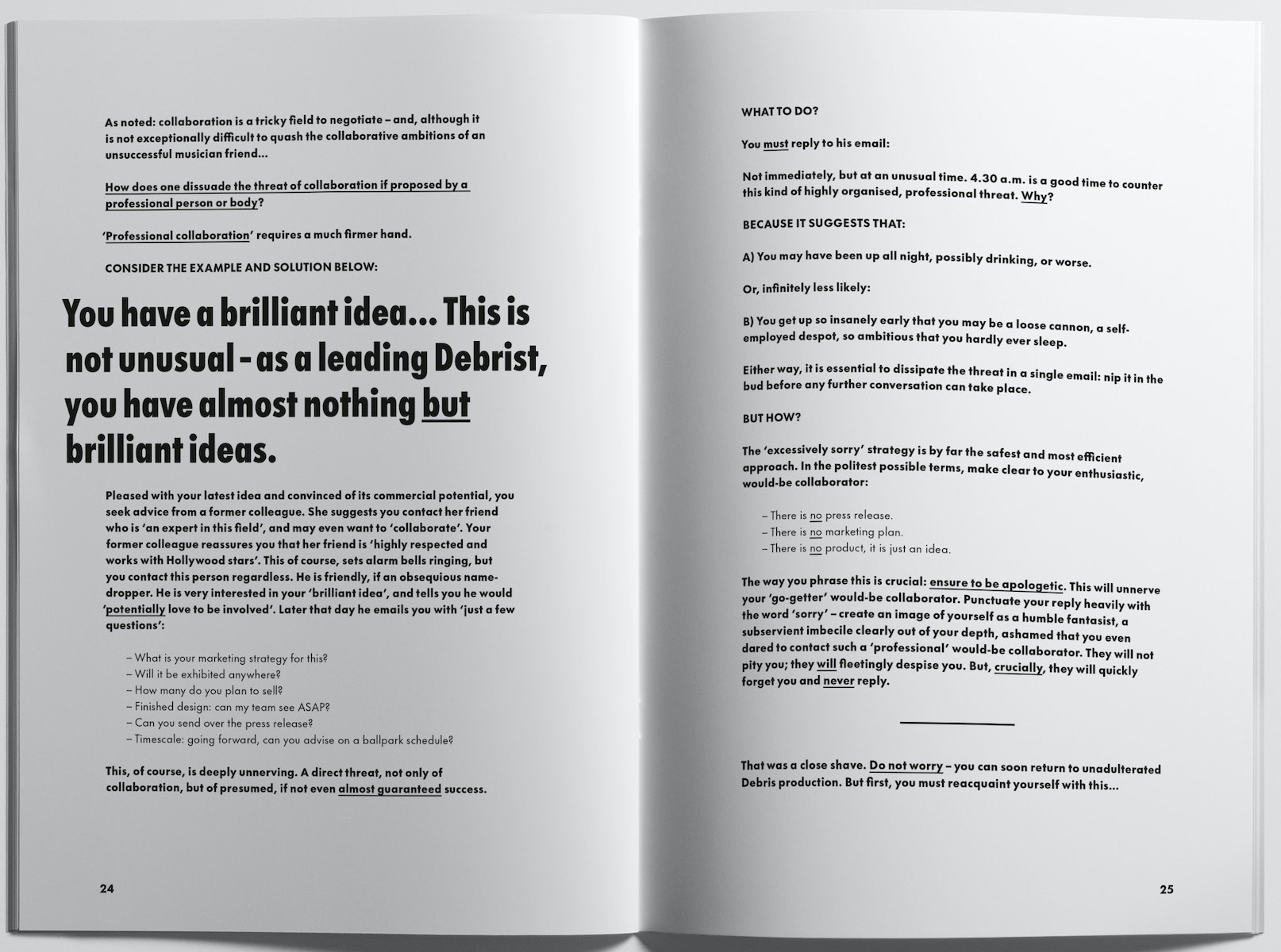 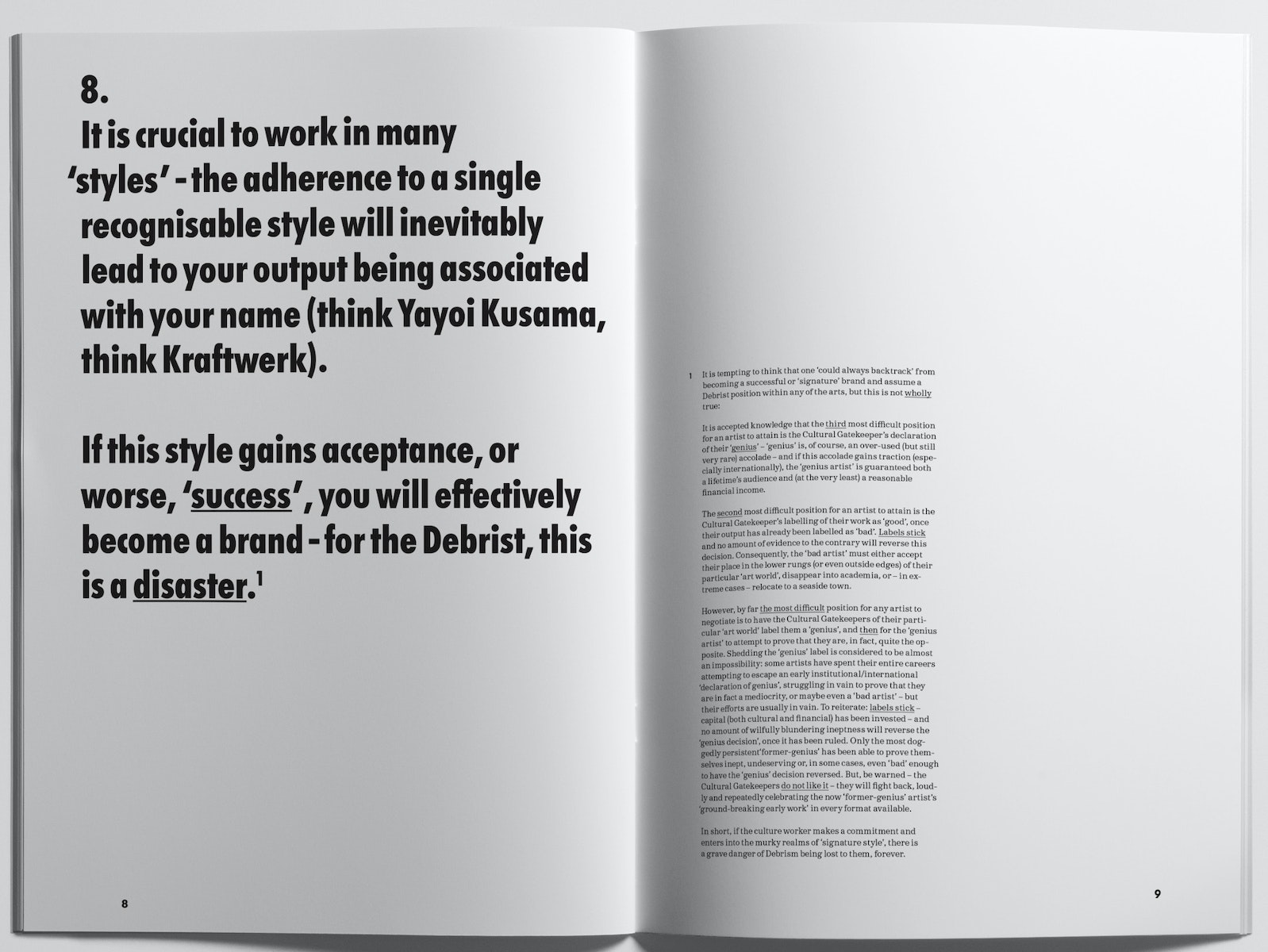 “I needed somebody to want me to do it – that’s a part of it,” he agrees. ​“After a bit of toing and froing, I thought, actually this would be the opportunity.” Having mocked up an abbreviated version of The Debrist Manifesto to Civilisation, King then expanded it into a book, co-designing it with graphic designer Richard Massey.

If you’re reading this and nodding along, great. For those a bit unsure, King’s book ends with what he’s titled Moral Inventory – a 14-box checklist including ​“impulsive”, ​“damaged history” and ​“exhausted”. Score 10 or more, and you, my friend, are a Debrist.

But for what it’s worth, King can’t actually clarify who a Debrist is. ​“I don’t know,” he says, with a hearty laugh. ​“There’s no single person.”

The artist does, though, acknowledge that prime candidates are people like him who felt particularly bogged down earlier this year. ​“Even the hardiest of people were getting down with this terrible reality of being trapped inside, horrible weather and not being able to do anything.

“And for the younger people who have suffered mentally,” he continues, ​“it’s not like this theatrical Hollywood breakdown. It’s confusion because your world has shrunk at a time when you really need to be socialising. So inevitably, because of the context in which I wrote it, there are elements that relate to mental health and isolation, all in the manifesto.”

So, then, it’s time for action. Get up, get out, write that novel (or just read that novel), organise that post-lockdown knees-up, complete that boxset, launch that podcast (or just finish that podcast), learn to make fancy food, organise fancy food, or whatever. Scratch your balls, itch your head. You’re a Debrist, so you know what to do… Or do you?

The Debrist Manifesto is available now (in book format) from at ser​vi​cein​dus​tries​.co​.uk, and is also available in newsprint format as an issue of Civilization at civ​i​liza​tion​.big​car​tel​.com