Black comedy has long been a part of the Hitman series. Within moments of skydiving down on to the fictional Burj Al-Ghazali – Dubai’s newly built skyscraper and the world’s tallest building – I’ve infiltrated the cloakroom, slipped into an ashen suit and stolen gold bullion from a safety deposit box. Later, after sneaking up to the penthouse suites, I’ll use that solid gold bar to bludgeon a billionaire. This is the kind of poetic justice the series is known for.

The setup to Hitman 3​’s introductory level is pure Mission Impossible, as you edge around the gleaming glass tower, also known as the Sceptre, in a jumpsuit. A master of disguise, Hitman’s Agent 47 is attending a ribbon-cutting ceremony at the top of the world. There’s a dash of Jason Bourne too – Agent 47 is continually inventive, to the point where yanking a gas pipe from the wall and sticking a magazine in a toaster feels positively mundane.

Of course, Hitman​’s most obvious reference point is Bond. A globe-trotting, party-mingling assassin with a suave suit and a silenced pistol. But the closest similarities aren’t with that character or even action, but all to do with location and setting. Hitman​’s developer IO Interactive recently announced it was developing a new James Bond game and, honestly, the pairing fits like an assassin’s leather glove. Having just released Hitman 3 – the final game in IO’s trilogy – the Danish studio has mastered one of the most important elements to any Bond: the art of the villain’s lair.

Hitman has always given players the goal of infiltrating and invading the radical homes of the super-rich and megalomaniacal. From Italian villas equipped with underground bunker-laboratories and state-of-the-art private hospitals built into the sides of mountains to tropical havens squirrelled away in the Maldives and even modernist beach houses, Hitman is heavily indebted to Bond films and their shadowy, occasionally flamboyant, criminal hideaways. The series also owes much to talented set designers like Ken Adam and the architects whose work is often showcased in the 007 films, like Frank Lloyd Wright and John Lautner.

So what makes the perfect villain’s lair? Dubai’s Sceptre is a great introduction. Its extreme verticality, with the richest and most villainous occupants residing on the upper-most floors, is an excellent spatial metaphor. Skyscrapers like the Sceptre often have this Babel-like quality, where building high appears like an act of hubris. The inside of Hitman 3​’s Sceptre is filled with huge, dramatic spaces, all adorned with opulent gold leaf patterns. There are sky gardens and palm trees, carpets and curtains made of royal purple and blue velvet, and even several waterfalls which plummet from the upper atrium all the way down to ground level. On the balcony of the Black Gold Bar you can find a loving couple, arms around one another, looking out at the striking view. An oil field burns fiercely in the distance.

Next to the bar lies an art exhibition. Showing there is Lucy Phillips’ latest ​“masterpiece”. A large room filled with a series of cubist lights, it culminates in a resplendent sun installation that’s viewed from a platform bathed in an inch or so of water. There’s dramatic irony aplenty as one of the technicians behind the scenes can be heard commenting that water and electric are never an ideal mix. By taking the right steps you can rig the installation to surge, and Marcus Stuyvesant – head of a banking and real estate empire, and member of the Illuminati-like group, Providence – is lit up like Robert Pattinson at the end of The Lighthouse. As with Icarus, Hitman​’s villains often soar too close to the sun and end up getting burnt.

The Sceptre’s other villain, Carl Ingram, is a classic oil baron. One way you can deal with him is by gaining his trust. After being let into his penthouse office, he shows you a scale model of one of his oil rigs, and you’re given the opportunity to shove him, impaling him on his own diorama – now that’s hostile architecture. 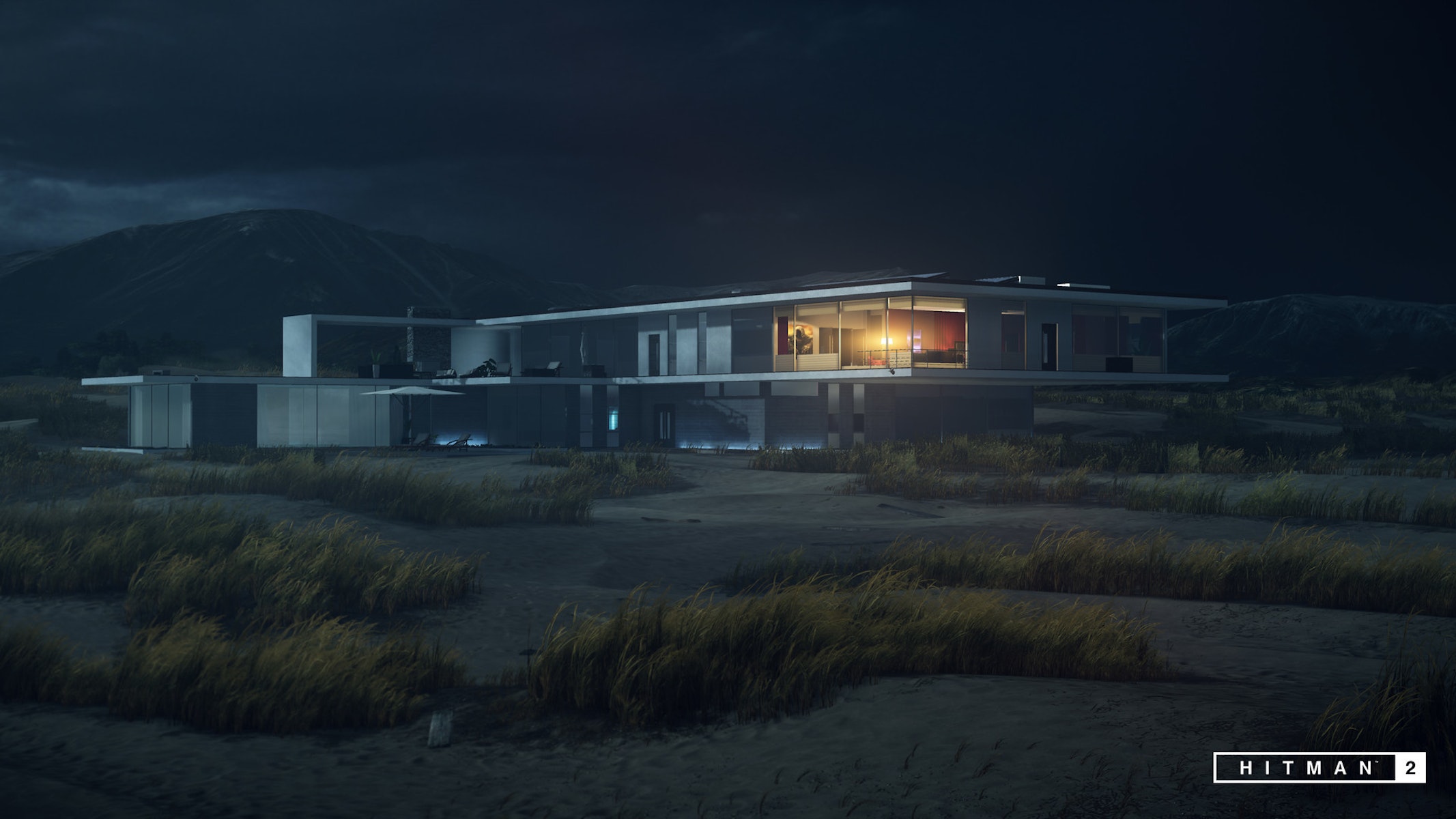 The Sceptre is, like many an evil-doer’s place of residence, ridiculously ostentatious. To counteract all the crass Trump-like glitz and gold, Hitman 3​’s next level takes place within a traditional country manor set in a grey and dreary Dartmoor, in the south of England. It’s reminiscent of Skyfall, where we’re introduced to Bond’s ancestral home in the Scottish Highlands near Glen Etive.

After a whiff of Old Money, Hitman 3 returns to a more modern setting with its Chongqing level. With neon lights and rain-streaked alleyways, the Chinese metropolis appears at first to be a bit of a departure, until of course you wind up in the level’s lair proper – an underground data facility hidden beneath one of the city’s abandoned lots. The base belongs to the ICA – Agent 47’s previous employer. In many ways, the Hitman trilogy is one long, self-reflective ​“Are we the baddies?” arc. ICA’s underground facility marks a trend in the series. One of Hitman​’s very best levels, Sapienza, features an underground bioweapon laboratory. Likewise, in Hitman 2​’s Haven Island, there’s an elaborate underground server room buried beneath more traditional architecture. In all cases, these subterranean lairs represent the dark unconscious of their villainous occupants.

The Hitman series is full of modern architecture. The GAMA private hospital is a flat-roofed complex built into a cliffside in Hokkaido, Japan. Meanwhile, Hitman 2 features a whole sweep of modernist buildings. The game’s introductory level, Hawke’s Bay, is an austere modernist glass box squatting atop New Zealand’s windswept dunes. The mansion is eerily similar to the modernist house from the film The Ghost Writer. Home to the scheming villain Adam Lang (played by Pierce Brosnan, who, obviously, has also been Bond), the mansion is cold and emotionless. Also, like so many of Hitman​’s levels, the walls are packed with abstract modern art. The highlights of both houses are the huge glass windows and wooden decks that overlook and open out onto the hostile ocean beyond.

Hitman 3 continues with this tradition of pairing its villains with modern architecture. One of the best levels is a vineyard estate in Mendoza, Argentina. A more traditional mansion with white painted walls and terracotta-tiled roofs sits atop a cliff, glowing in the perpetual ​“golden hour”. Far more dramatic though is the tiered modernist structure which juts out from the cliff itself, working its way down to the ground level where the chardonnay fields are located. When I think of Hitman, or Bond, this is the kind of architecture I picture.

Cliffside or mountaintop hideouts are popular with villains. In Hitchcock’s North by Northwest the chilly Phillip Vandamm (James Mason) lives in a modernist lair built on to the side of Mount Rushmore. The building was modelled after Frank Lloyd Wright’s famous Fallingwater. Hitman 3​’s Mendoza complex is more curvaceous, but feels similarly sophisticated, featuring numerous cantilevers and being hitched to the side of a rocky cliff.

The Mendoza villa is the home of Don Yates, a founding partner of a top legal firm that protects the rich and powerful by any means necessary. The huge complex that sweeps around the cliffside is made of concrete and copper, with an art deco feel. It mainly seems to function as a place to host lavish parties and show off a vast collection of fine wine. The building also houses a massive fermentation and production area. Guests can look down from the atrium, or from the firepit level through several great holes that have been cut into the ceiling. These holes open up via sliding windows, bringing to mind one of the most infamous Bond lairs ever – the volcano base from You Only Live Twice. 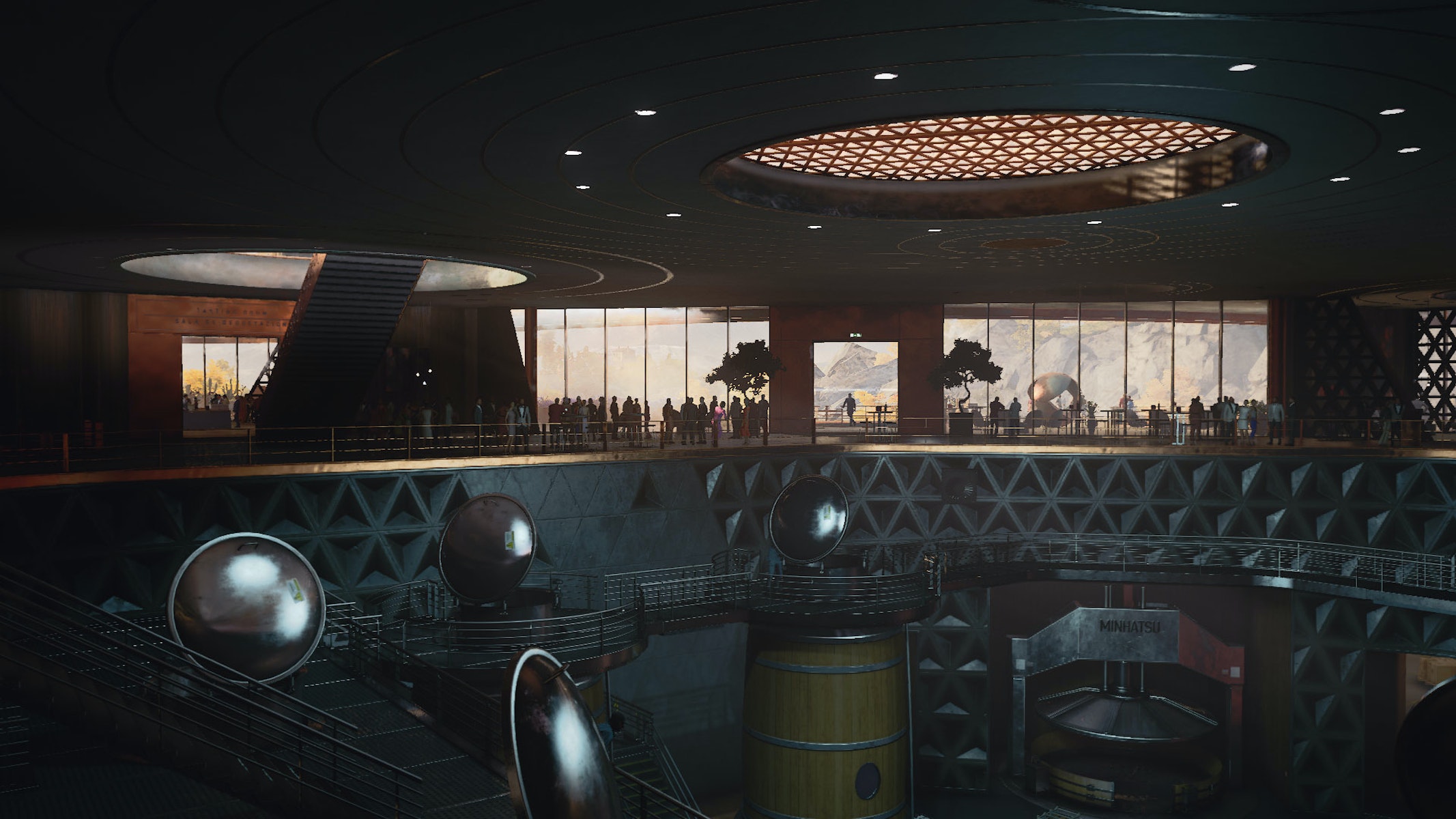 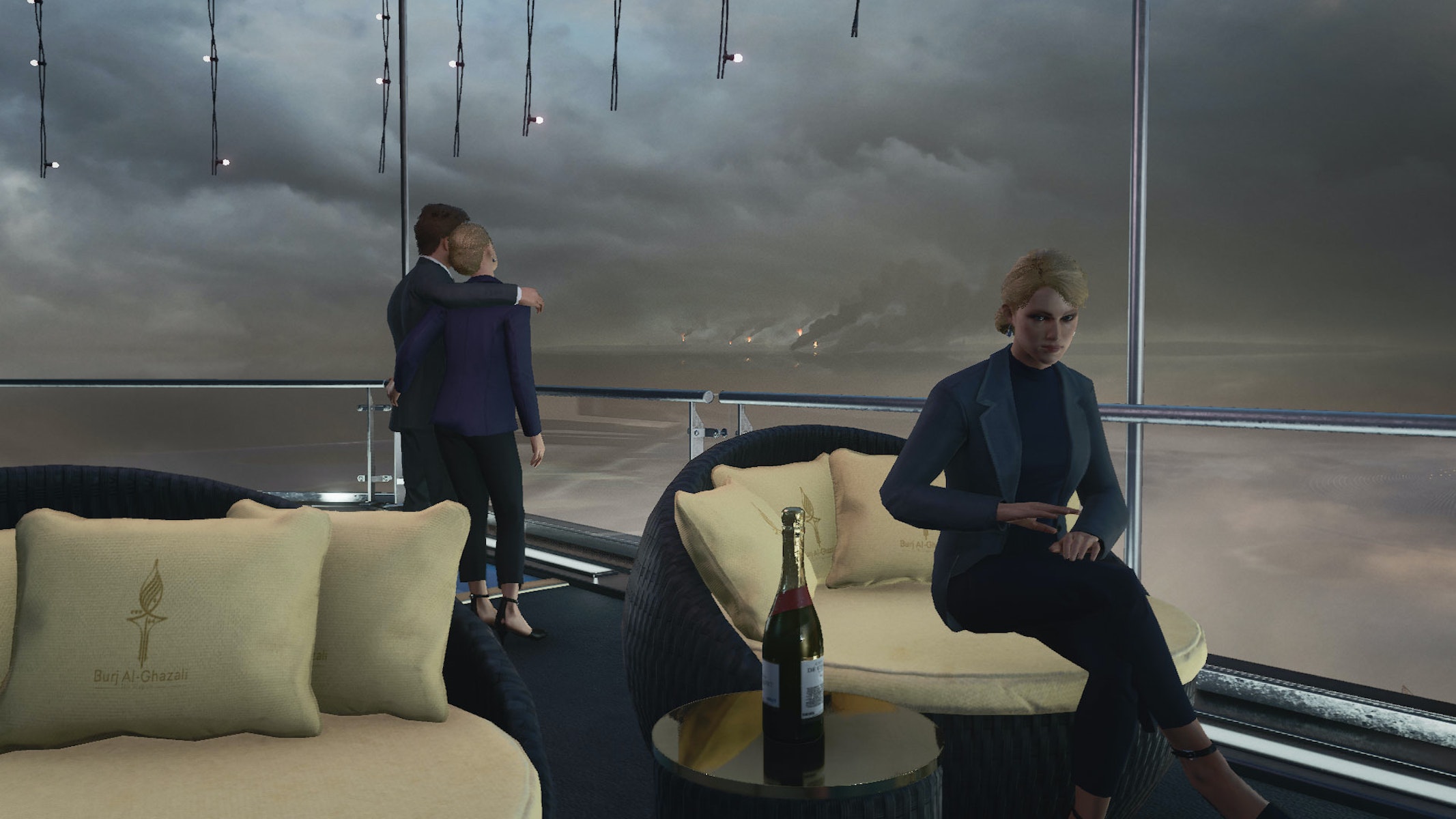 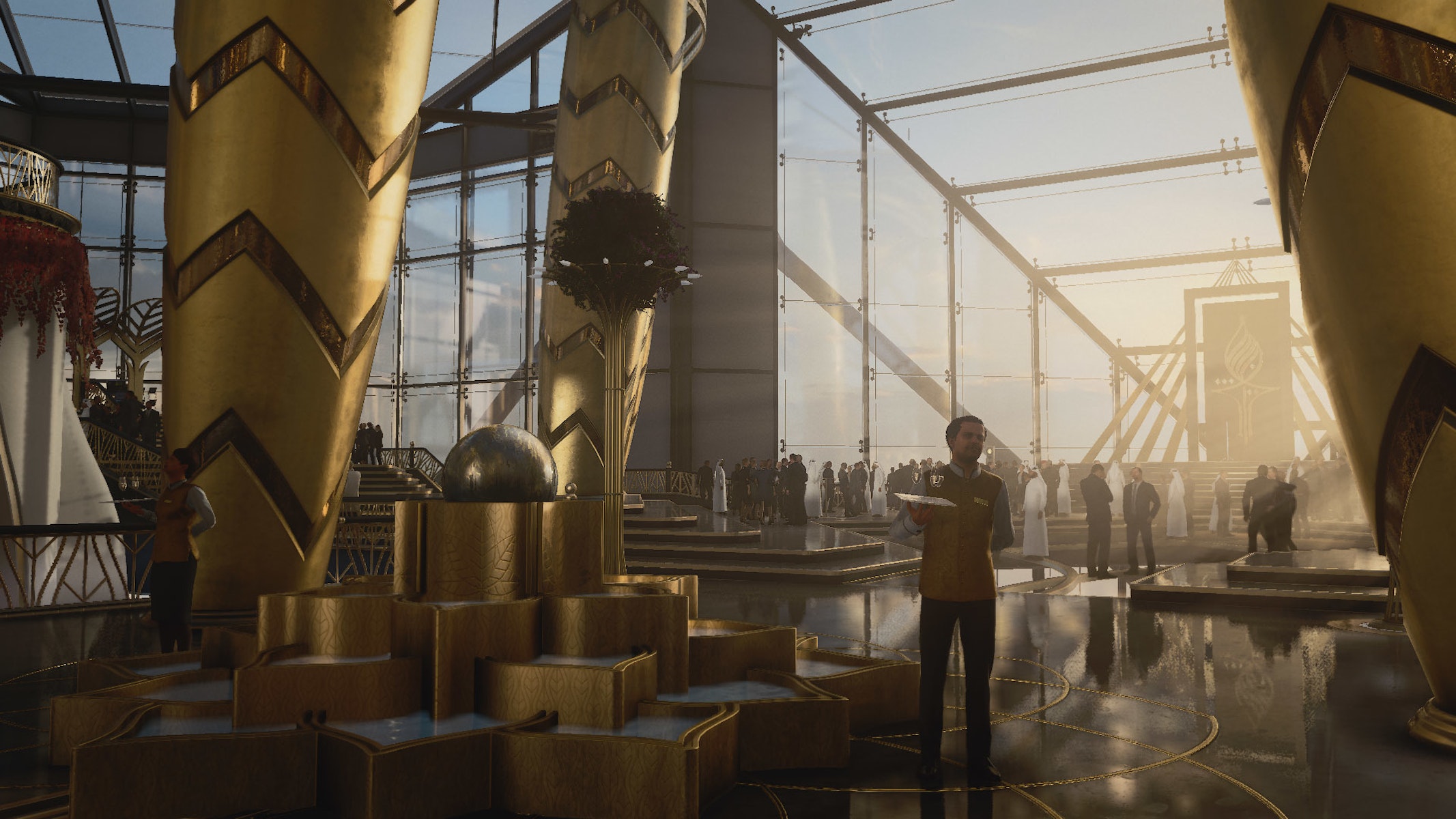 IO Interactive has clearly studied the kinds of dramatic sets and architecture you find in Bond films. Production designer Ken Adam created the volcano base, which was accessed through its own giant hole after the roof retracts. Likewise, Hitman​’s Mendoza villa feels like a bunker from within – the only thing missing is a tank filled with vintage wine for Don Yates to drown his enemies in.

There are elements of another Ken Adam set, this time the lair from Diamonds Are Forever. Based on John Lautner’s Elrod House, this refuge is another modernist abode built atop a craggy mountain ridge. Like many of Hitman​’s best levels, it not only offers luxurious views but mixes inside and outside areas, with parts of the architecture seeming to stretch and blur alongside the natural world.

There’s certainly something that attracts evil-doers to modern architecture and remote hideouts. Joseph Rosa, in his essay ​“Why do bad guys live in good houses?” argues that modern architecture, through film and now games, has become a kind of shorthand sign for immorality. Clinical modernism is seen as anathema to traditional American values, which have long been wrapped up with more familial, conservative spaces.

Hitman​’s modern architecture – minimalist, steel-framed, concrete complexes with flat roofs and huge glass windows that open out on to spectacular scenery – are aspirational as well as inspirational. Power and wealth overlap more often than not and the buildings of famous architects have become an increasingly sought-after commodity. Modernism is often viewed as being cold and soulless, and most importantly, new and therefore scary.

Through Bond, modern architecture has picked up a reputation for being home to the criminal and the corrupt. In this sense, the Hitman series is a continuation of this mythology. From the striking glass box found atop the game’s Isle of Sgàil’s castle to Providence’s hanging mountaintop base, the Hitman series and its many villains will forever be connected to modernism. With its new 007 licence in hand, you can expect IO interactive to continue to deliver dramatic, modernist game spaces. The Hitman trilogy may be over, but it might not be too long before we’re infiltrating another villain’s lair.