When an incredibly driven group of LGBTQ activists formed OutRage! in May 1990, systemic homophobia still infected everyday life in the UK.

Same-sex couples didn’t have the right to marry or adopt, it wasn’t illegal to discriminate against LGBTQ people in the workplace, and the Sexual Offences Act of 1967 prohibited gay men from having sex until they turned 21. The Section 28 act, enacted two years prior, prohibited local authorities from ​“intentionally promoting homosexuality” in schools.

For the next 21 years, OutRage! mounted a sustained campaign of ​“radical, non-violent direct action and civil disobedience” to improve the rights, freedoms and protections afforded to the LGBTQ community.

A grassroots group run on minimal funds with no designated leader, OutRage! was consistently effective but sometimes controversial. In the mid-’90s, it faced criticism in the mainstream media for outing gay members of the clergy in a bid to highlight homophobia and hypocrisy within the church.

Still, 30 years after its first meeting, held at the then-London Lesbian and Gay Centre in response to the horrific murder of gay actor Michael Boothe, it’s no exaggeration to say that OutRage! transformed the lives of LGBTQ people in the UK.

“I can’t recall any other all-volunteer direct action group anywhere in the world that did so many wide-ranging protests over such a long span of time,” says Peter Tatchell, one of its founding members.

Here, Tatchell and other OutRage! members recall some of the group’s most significant contributions to queer rights in the UK. 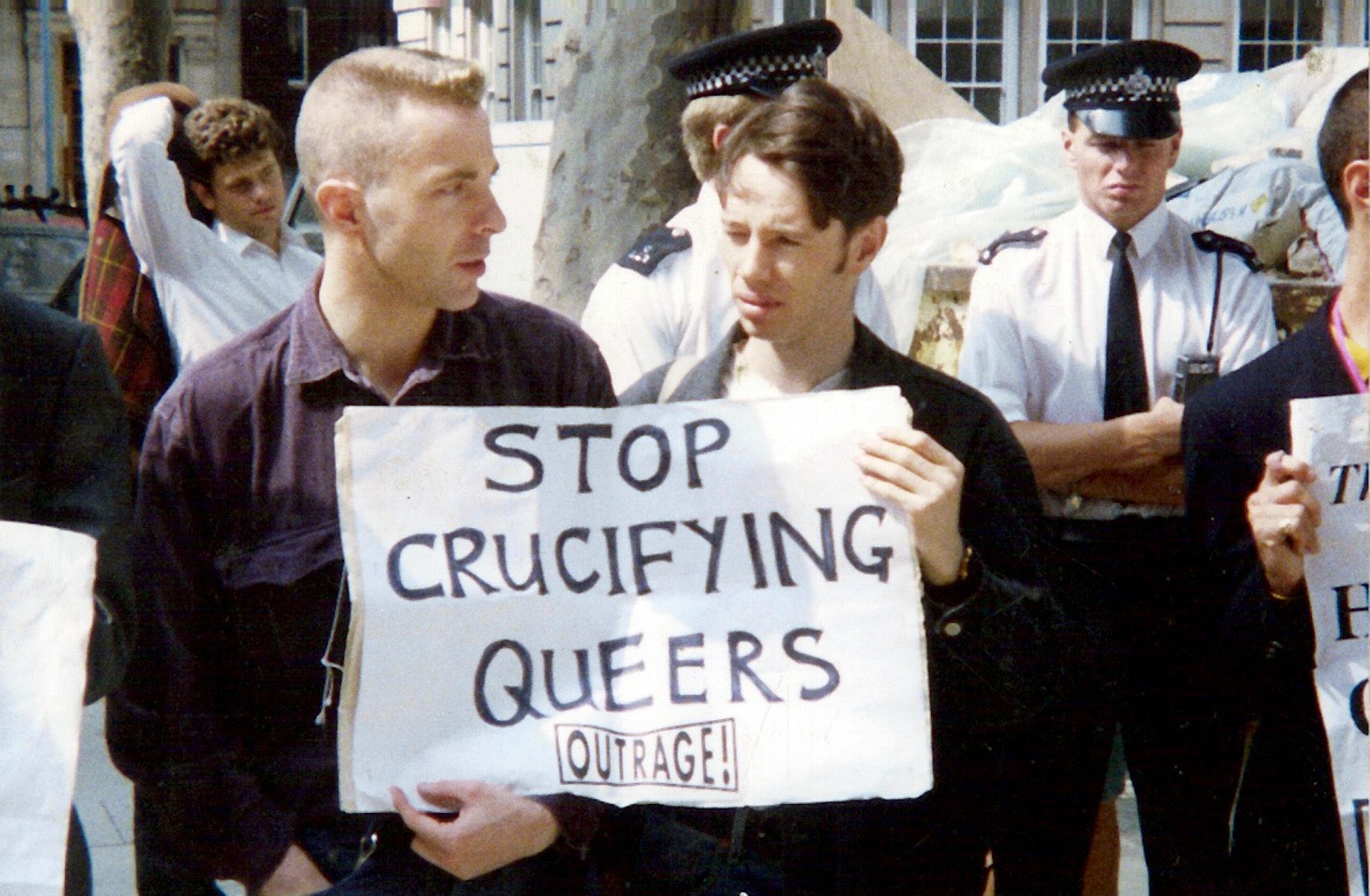 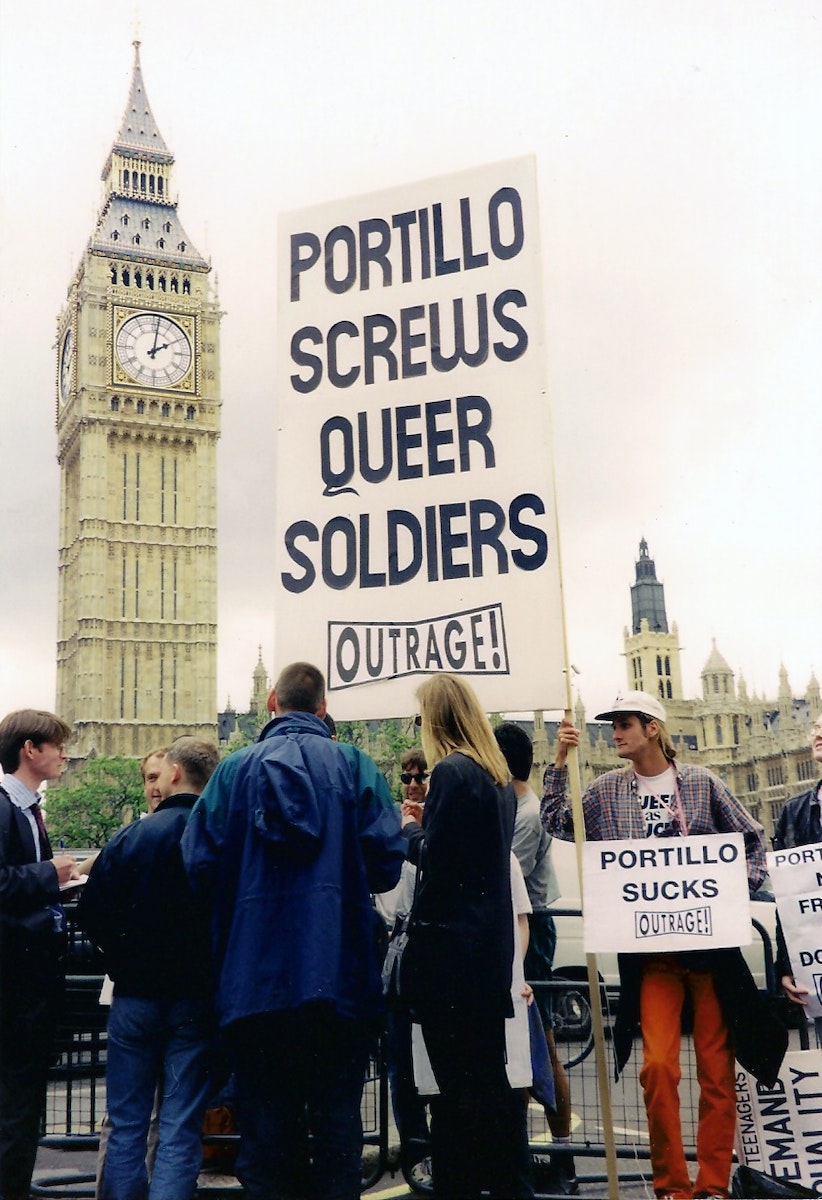 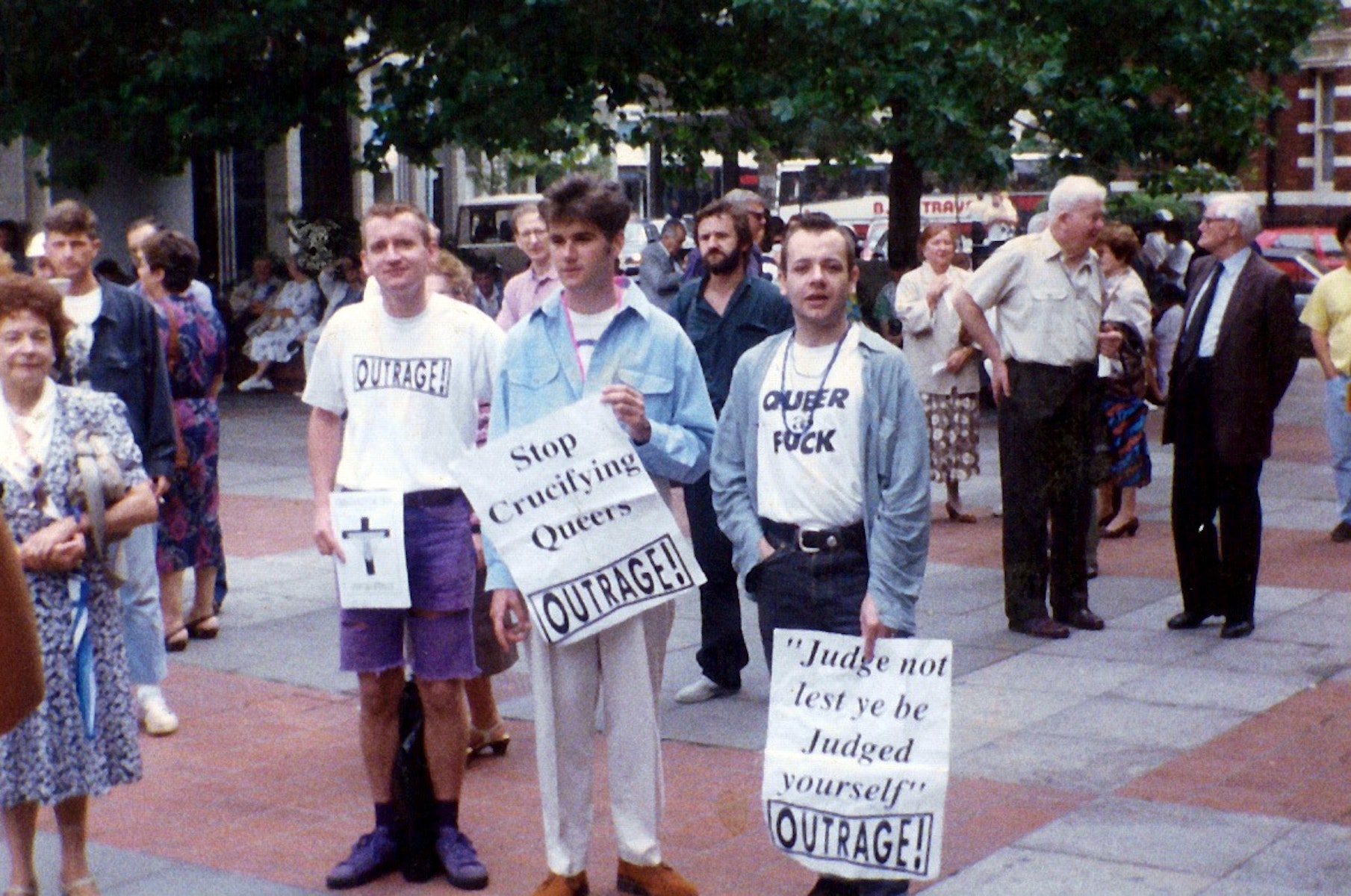 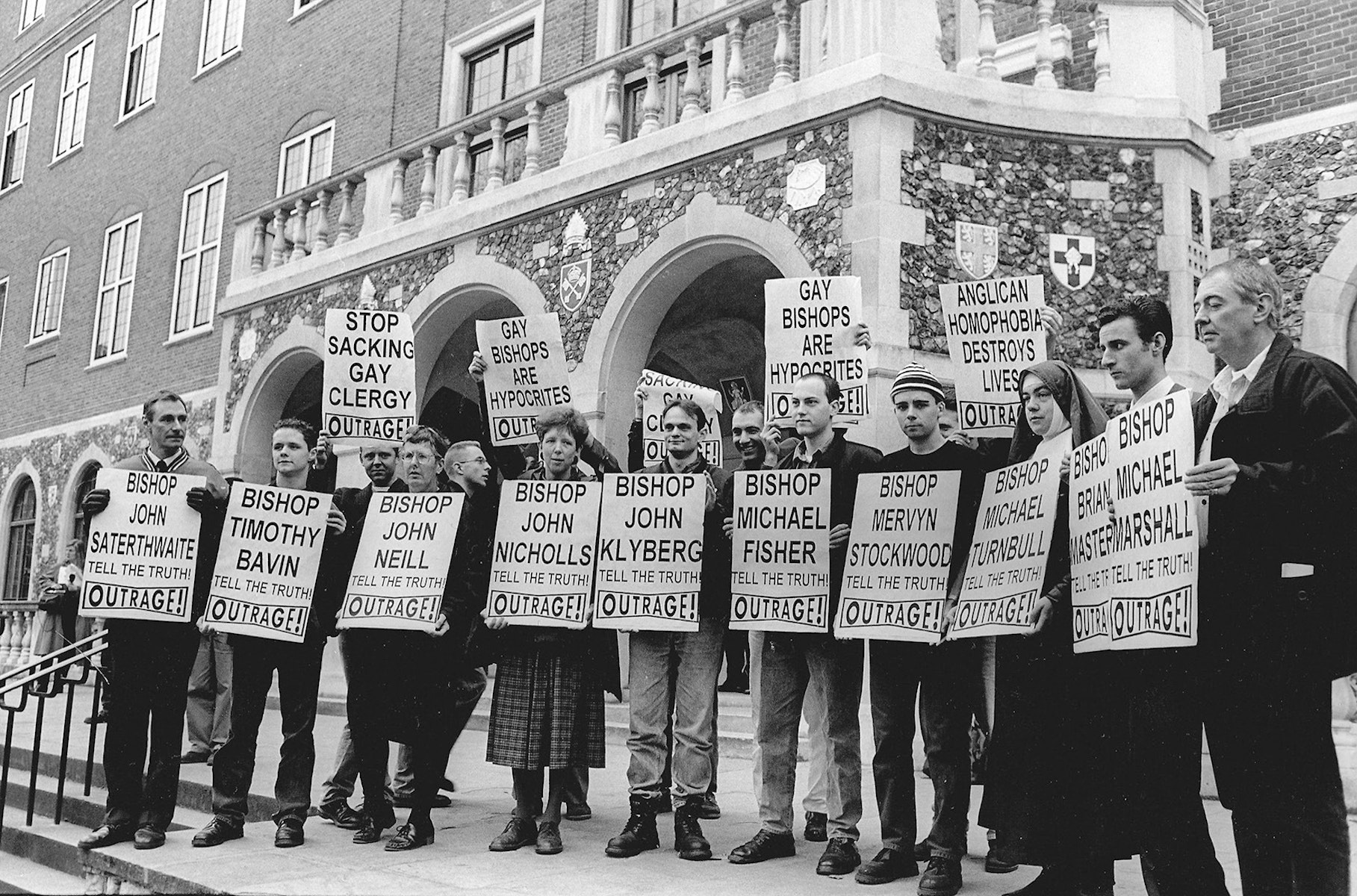 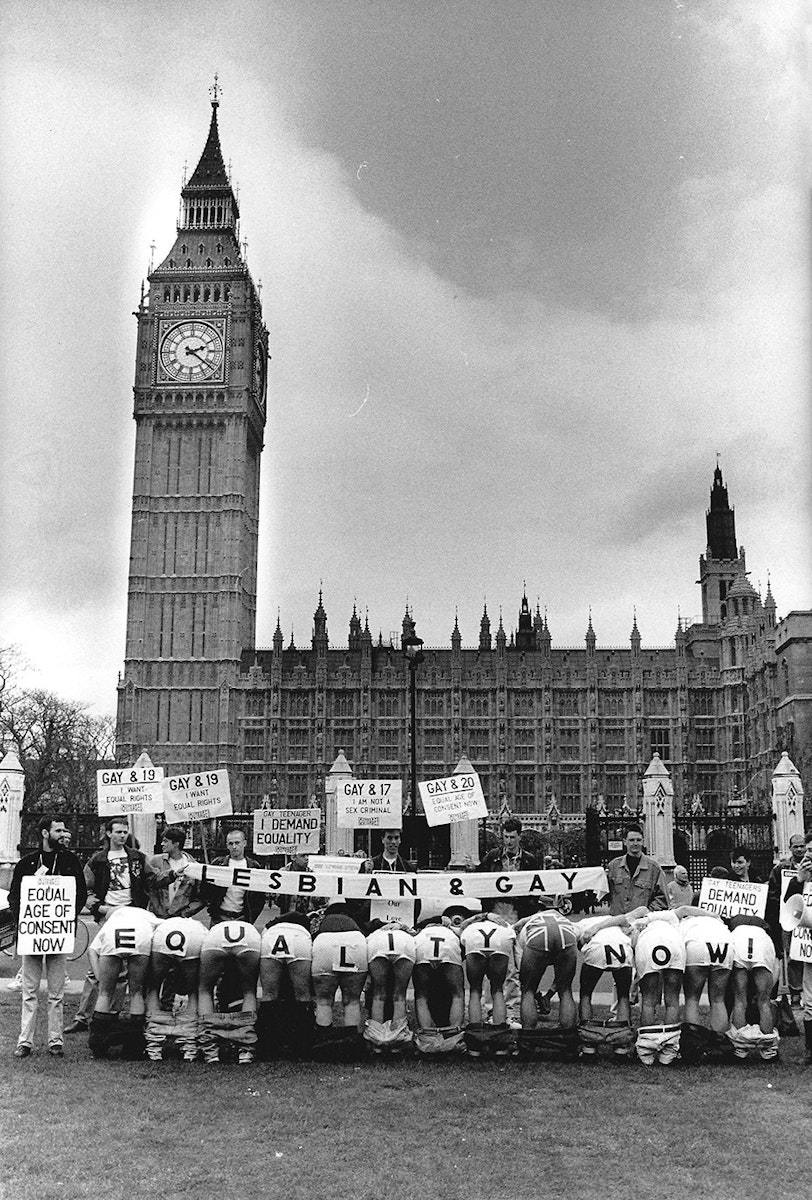 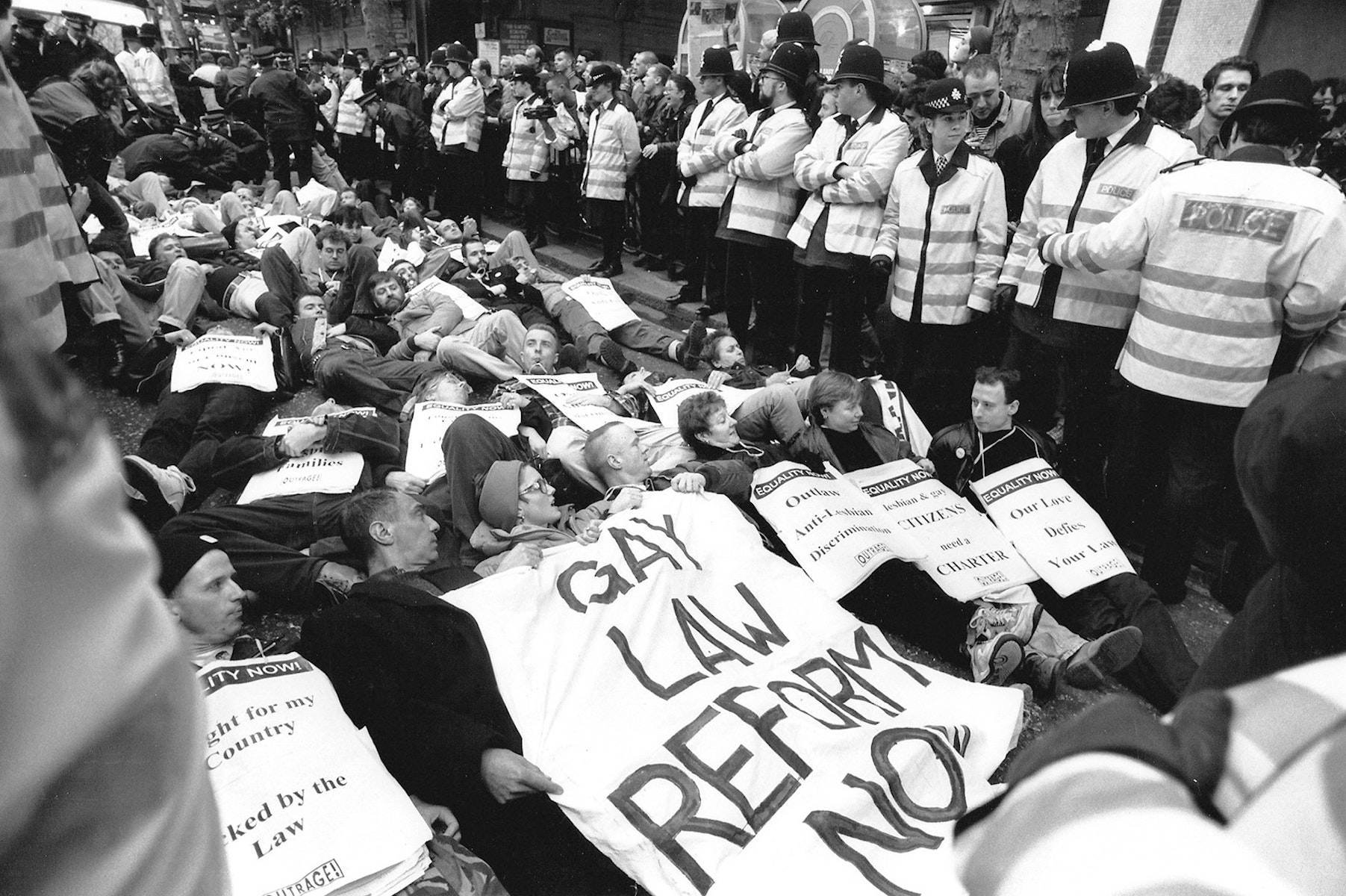 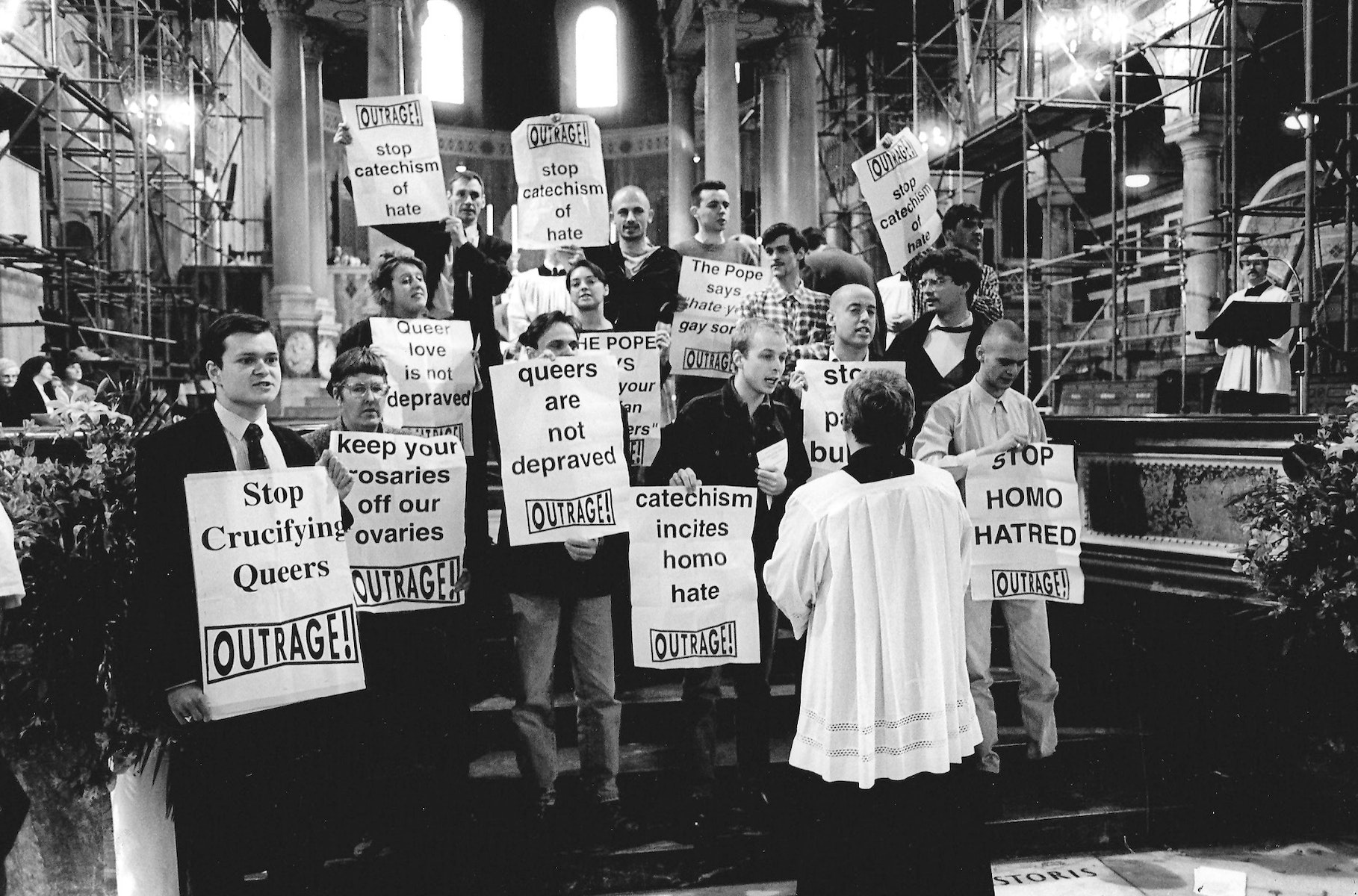 “Back in 1990, it felt like the police were at war with the LGBTQ community,” Tatchell says. He calls the typical response to queer-bashing attacks and murders such as Boothe’s ​“tardy and half-hearted”.

At the same time, Tatchell says that ​“on average over 2000 men were being arrested every year for consenting [sexual] behaviour, mostly as a result of police raids on gay saunas, public toilets and cruising areas in parks and canal towpaths.”

Tatchell recalls police interpreting the law in such a ​“draconian” way that same-sex couples were even being arrested for public displays of affection, like kissing and holding hands.

To highlight that this policy wasn’t just discriminatory, but also a massive waste of police time, OutRage! organised a ​“kiss-in” at Piccadilly Circus, London where activists would challenge officers to arrest them. An hour before it was due to begin, police chiefs announced that same-sex couples would no longer be arrested for public displays of affection.

According to Tatchell, this turned the already high-profile protest into ​“a celebration rather than an act of defiance”.

“Looking back now, what amazes me is how the presence of OutRage! in central London could literally stop traffic,“ recalls fellow activist Sarah Hews. ​“I remember press cameras clicking madly and tour buses stopping with amazed tourists standing up, desperate to get a photo. Would the sight of lesbians and gays snogging in central London even raise an eyebrow now?”

The battle to secure same-sex marriage in the UK took several decades and has was only just been fully won. Though same-sex couples in England, Scotland and Wales have been able to marry since 2014, the first same-sex weddings in Northern Ireland didn’t take place until February of this year.

Back in 1992, OutRage! catapulted the issue into the mainstream consciousness with a brilliant and typically witty publicity stunt. Hews and her partner Lynn Sutcliffe presented themselves to be married at Westminster Registry Office, each dressed in a white wedding dress, one borrowed from a drag queen, and the photos went global.

“I remember saying: ​‘We will be back. This will happen in our lifetime,’” Hews recalls. ​“I didn’t really believe that at the time, but 25 years later we walked into another London registry office with our 10-year-old daughter, exchanged rings and were married. I feel proud and grateful to have been even a small part of making that possible.”

Campaigning to equalise the age of consent for gay men

Back in 1990, the age of consent for gay men was 21 – five years older than for everyone else. Tatchell says that when OutRage! began its campaign to equalise the age of consent, it caused a ​“huge backlash” and the group was ​“accused of corrupting youth and spreading homosexual propaganda”.

OutRage! responded by staging teenage kiss-ins and trying to humanise the issue. ​“We put forward young gay men under 21 to tell their own stories and describe how the discriminatory age of consent made them feel like criminals,” Tatchell remembers. ​“Hearing their authentic stories about the fear and anxiety of getting arrested was really effective in demonstrating the negative impact of this homophobic law to the public.”

In 1994, when MPs voted to only lower the age of consent to 18, OutRage! categorically refused to accept a partial victory.

“We sat down on the road, paralysing traffic around Piccadilly Circus and bringing central London to a standstill,” recalls activist Fernando Guasch. ​“The bodies stretched the whole length of Haymarket – the police had to literally wrench us away from one another.”

The persistence of OutRage! and other LGBTQ equality groups would pay off six years later when the Sexual Offences (Amendment) Act of 2000 reduced the age of consent for gay men to 16 – the same as for everyone else.

Campaigning for the repeal of homophobic legislation which affected school kids

In 1988, the Conservative government enacted Section 28, a legislation which prohibited schools and local authorities from promoting homosexuality. ​“In effect, it meant that teachers couldn’t give any support to distressed LGBTQ pupils or even challenge prejudice,” Tatchell says.

OutRage! tackled Section 28 head-on by producing a leaflet called ​“It’s OK to be Gay”, which it distributed at school gates. ​“This provoked a huge backlash – we were denounced by religious and political leaders,” says Tatchell.

Still, in the weeks that followed, teachers from across the country contacted OutRage! to ask if they could use the leaflet in lessons.

“When the fuss died down, a lot of people came around and accepted that we had simply been giving honest, factual information that would help reduce anxiety, depression and self-harm among LGBTQ young people,” Tatchell says.

OutRage!’s actions helped to galvanise public discomfort with Section 28. Following prolonged campaigning from numerous LGBTQ groups including Stonewall and Gay Times, it was finally repealed in Scotland in 2000 and in the rest of the UK three years later.

Speaking about OutRage!’s 21 years of campaigning on a wide range of LGBTQ equality issues, Lynn Sutcliffe says: ​“Do today’s queer youth ever realise how hard we fought for rights they take for granted, and does that sentence make me sound totally ancient?

“But fundamentally, I wish them a similar strength of conviction [to ours] – it’s an invaluable weapon for life.”

Find out more about OutRage! on its archive website and Peter Tatchell’s ongoing human rights work with the Peter Tatchell Foundation.