“I’m excited about the new project, it’s like a collection of expressions,” says Greentea Peng on her upcoming EP. We’re sat in her South London home which – perhaps unsurprisingly – represents her to a T(ea). Sweet smelling incense, books, records and objects from her travels are piled onto shelves. A swing she ​“found in Aldi for £5” hangs from the ceiling. Meanwhile, a balcony filled with fresh flowers overlooks a vast green garden that she shares with her neighbour: ​“I love the space and the green. It’s definitely my sanctuary.”

Much like her charming character and her home, the musician’s sound is soul-soothing. Her vocals are honeyed and reminiscent of the music she grew up listening to: ​“I naturally listened to Lauryn Hill [and] The Fugees – Ms Dynamite’s A Little Deeper was so inspirational.” These influences were clear in her six-track EP Sensi, which dropped in October 2018.

Each song is fused with lo-fi R&B, dub and reggae, with a sprinkling of psychedelia throughout. But it’s her raw lyrics like ​“Me and my bredrins /​We’re busy manifesting /​Too busy feeling blessed” that bring it back to the present day. Born in Bermondsey, Greentea Peng’s got a London attitude and she dances to the beat of her own drum but at the same time, she’s all about spreading love. An antidote to the mad state of the world.

While her stage presence might exude confidence now, Peng stopped singing for a while. ​“It was a period of time when I didn’t want to express myself – I stopped enjoying it,” she says. It was during a year-long trip to Mexico that she found her voice again: ​“I didn’t care what anyone thought about me because I was in a completely different environment. It gave me a lot of space to grow and get used to the stage, myself and having an audience.”

The Face speaks to Greentea Peng just ahead of the release of new single Mr. Sun (miss da sun). Is she apprehensive? ​“I’m trying to leave the nerves behind and understand there’s nothing to really be nervous about because it’s just sharing at the end of the day.”

To gain some of her wisdom, we ask Peng to guide us through her idea of modern living. How she spends her downtime. What she thinks we should do more of… 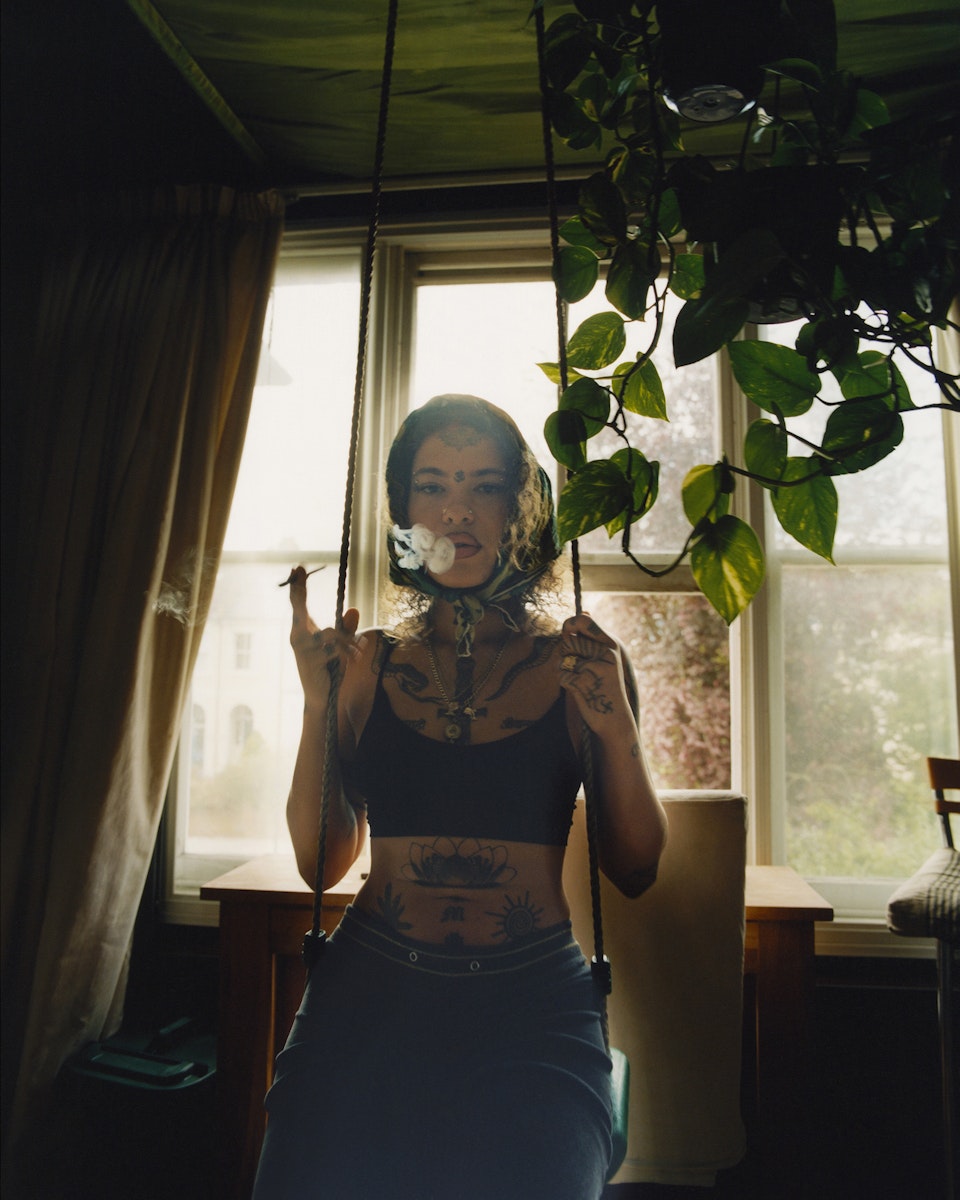 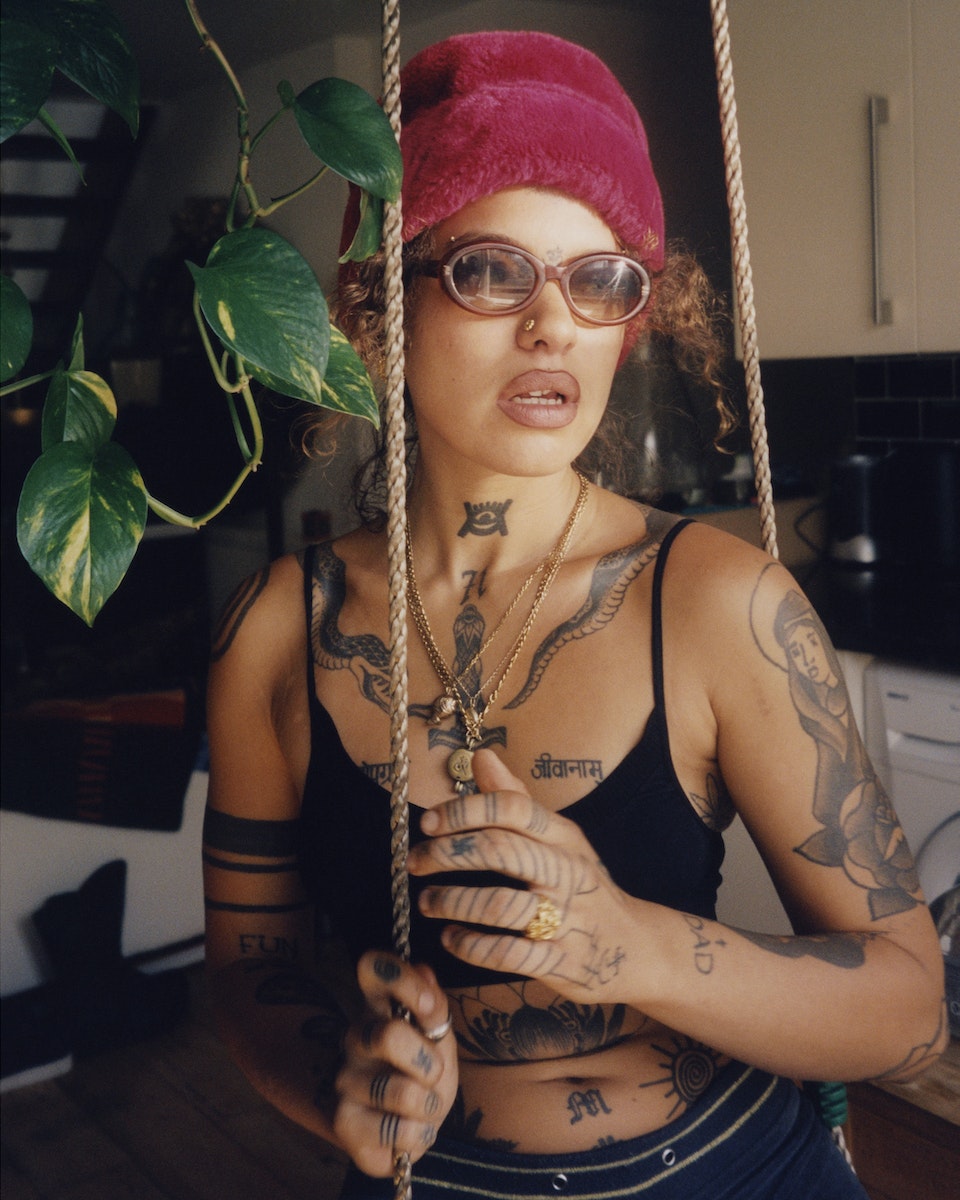 Life can get stressful. We live in an age of longer working hours, excessive consumption and lack of free time. Whether it’s meditating or reading a book, take time for yourself. How does Peng relax?

“I smoke a zoot, take my shoes off, put my feet in the ground. For me, marijuana is sacred. Obviously, I love getting high, and it might have started out as escapism when I was younger but also I had so much energy and I felt so much all the time. Weed really helped me settle into my feelings and calmed me down.”

Her method for relaxing has inspired much of her music, which is subsequently relaxing in its own right. ​“Lots of my songs are about weed and lots of my songs have been made while I was high. I’ve got a busy brain. I’m always thinking about some madness.”

“I think anyone you meet in life that you have that strong connection with and you pick up on each other’s vibe is a soul mate,” says Peng. The musician found her soulmate, Percy, a year ago at a Boiler Room event. ​“He says he was physically moving to me but I moved to him. I liked his dance moves, he was skanking and was wearing all blue and had big blue eyes.”

As for their first date? It sounds like something out of a movie. ​“I just finished work at 2am, [Percy] picked me up, we drove to Chinatown [Soho, London], we got mad high, got some Chinese and then we walked around Hackney Wick until the sun came up.”

Romance isn’t dead, after all. 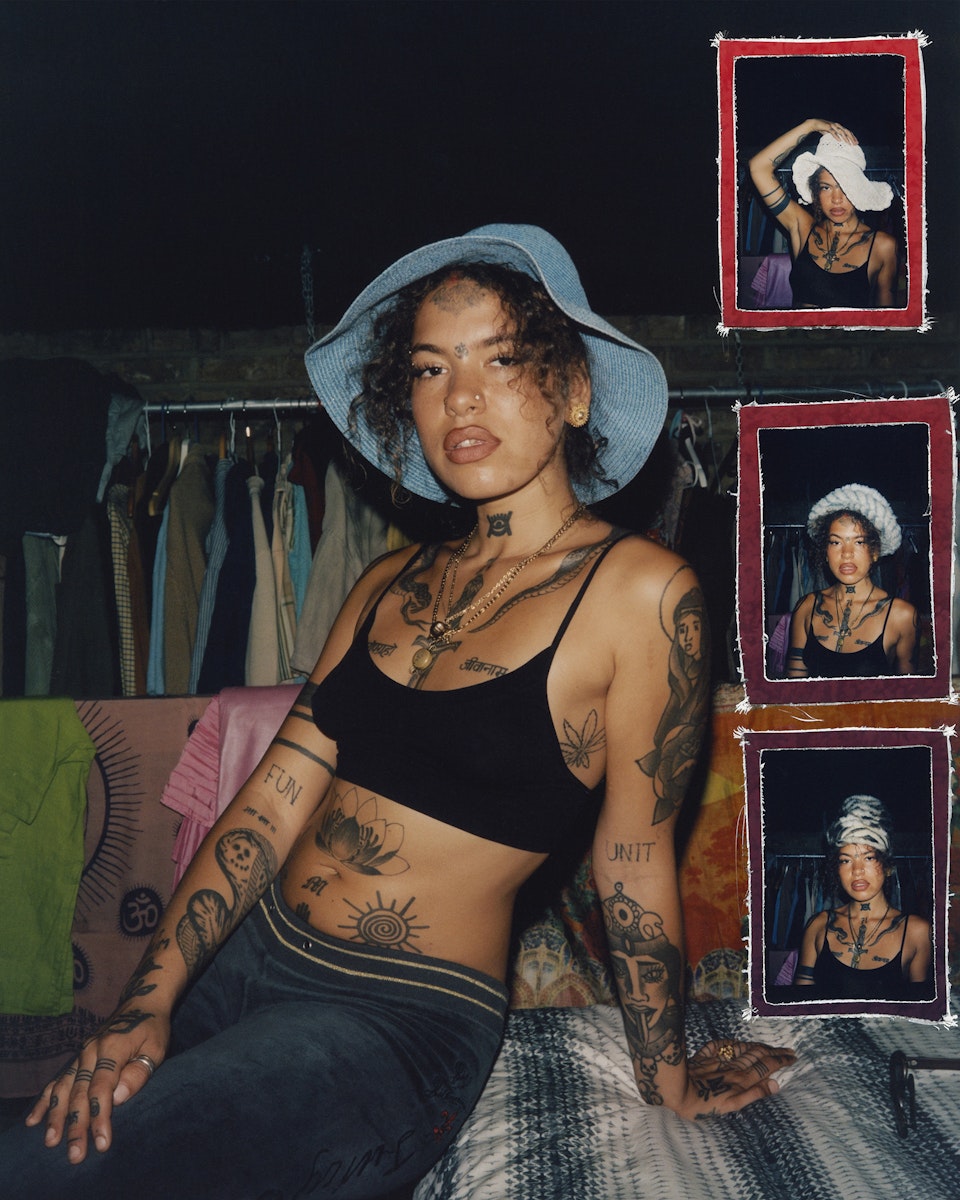 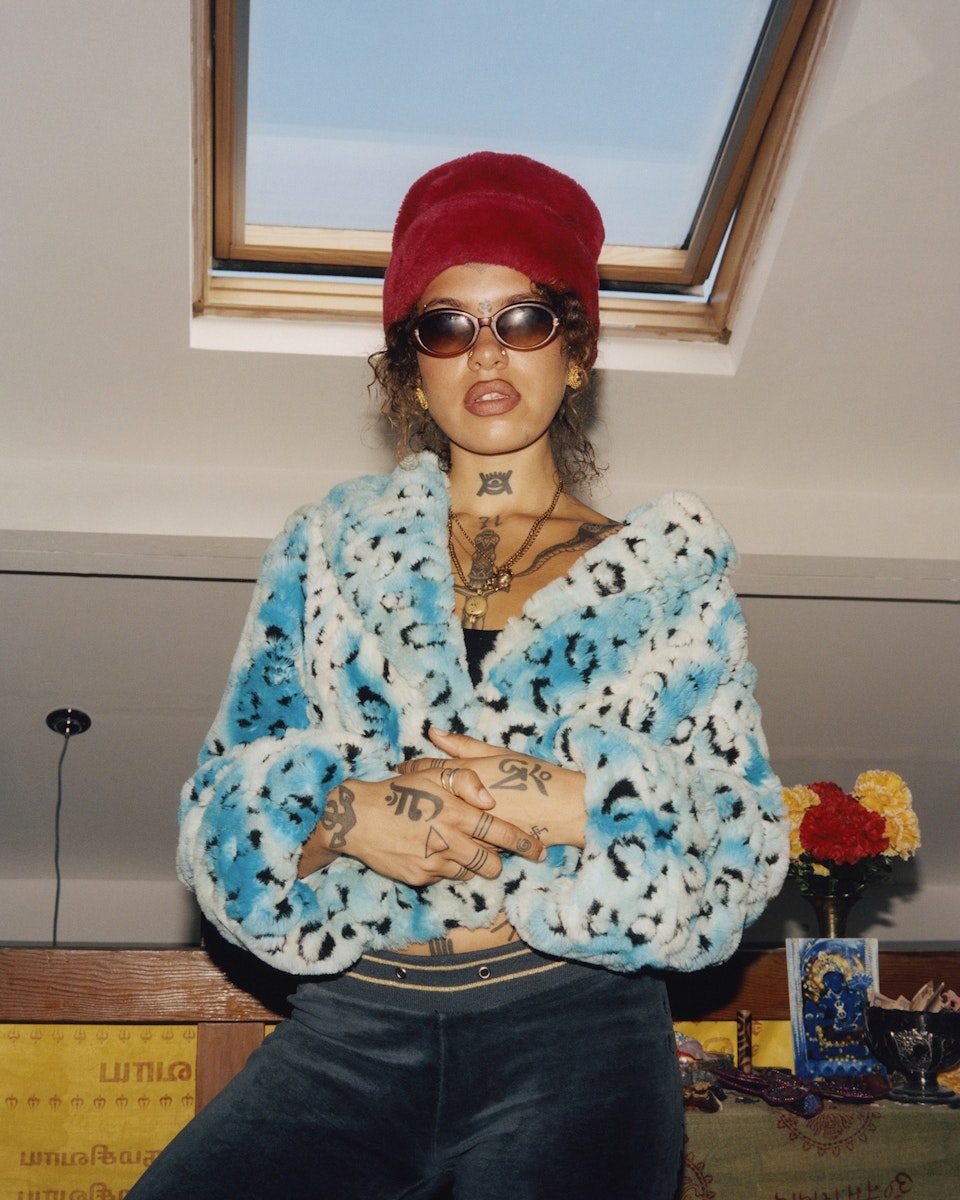 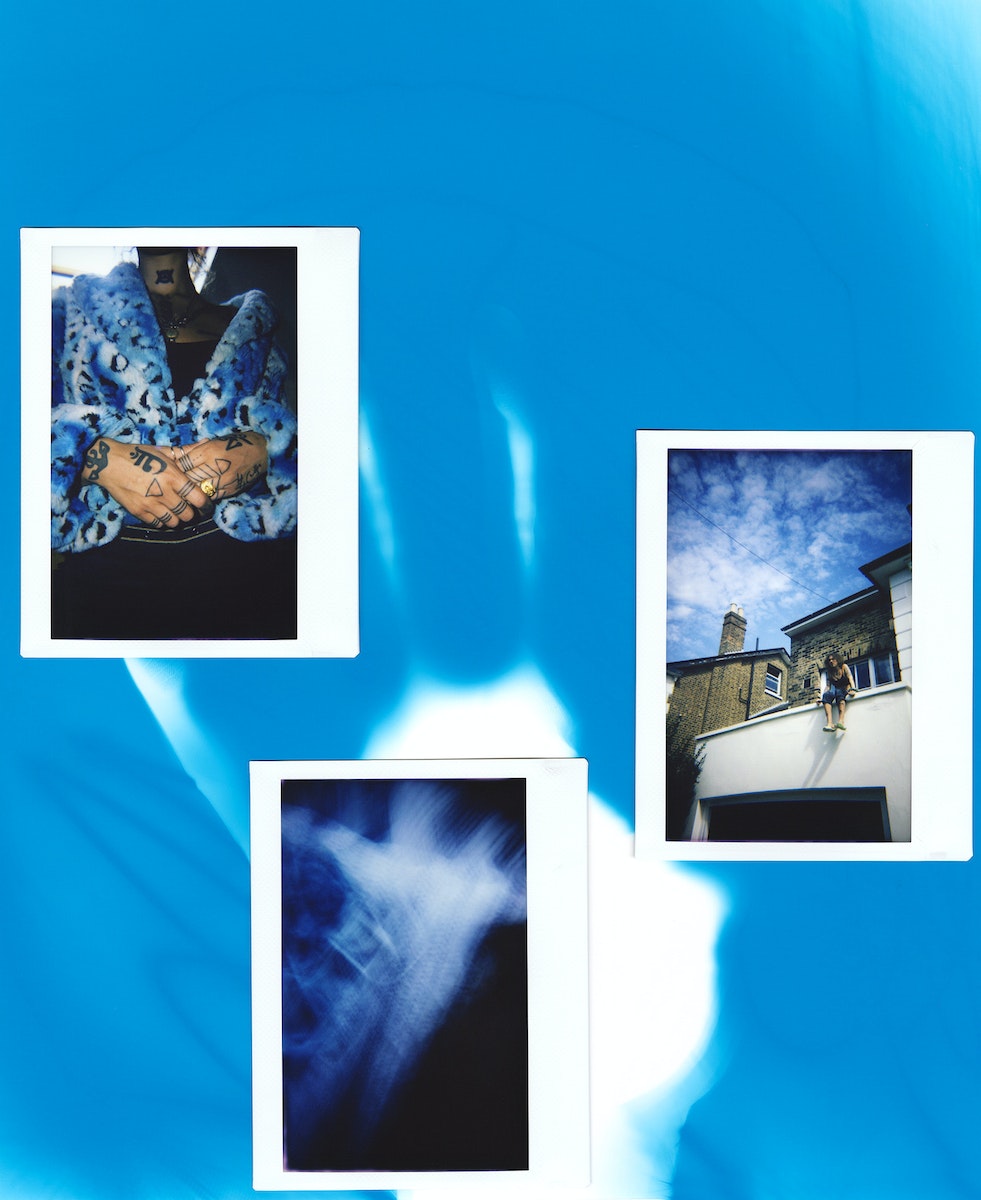 Peng’s style represents her. She wears what she wants to wear, and doesn’t buy into the zeitgeist. ​“I love dressing up. I’ve always shopped in charity shops [because] I could never really afford brands, so I just made myself look cool in different ways,” she says.

But with such an eclectic wardrobe, how does she decide what to wear? ​“I dress different every day. One day it’s a Nike tracksuit, the next it’s a mad hat. It depends what my mood is. It’s funny, I don’t like to stick out but if you see the garms I wear one part of me must do. I learnt that I don’t need to copy the way [people] dress, because I don’t wanna look like any of you anyway! So I might as well dress mad and look how I want to look. The older I get the more I think ​‘fuck it, I’ll wear that’. I’m not as fussy anymore.” 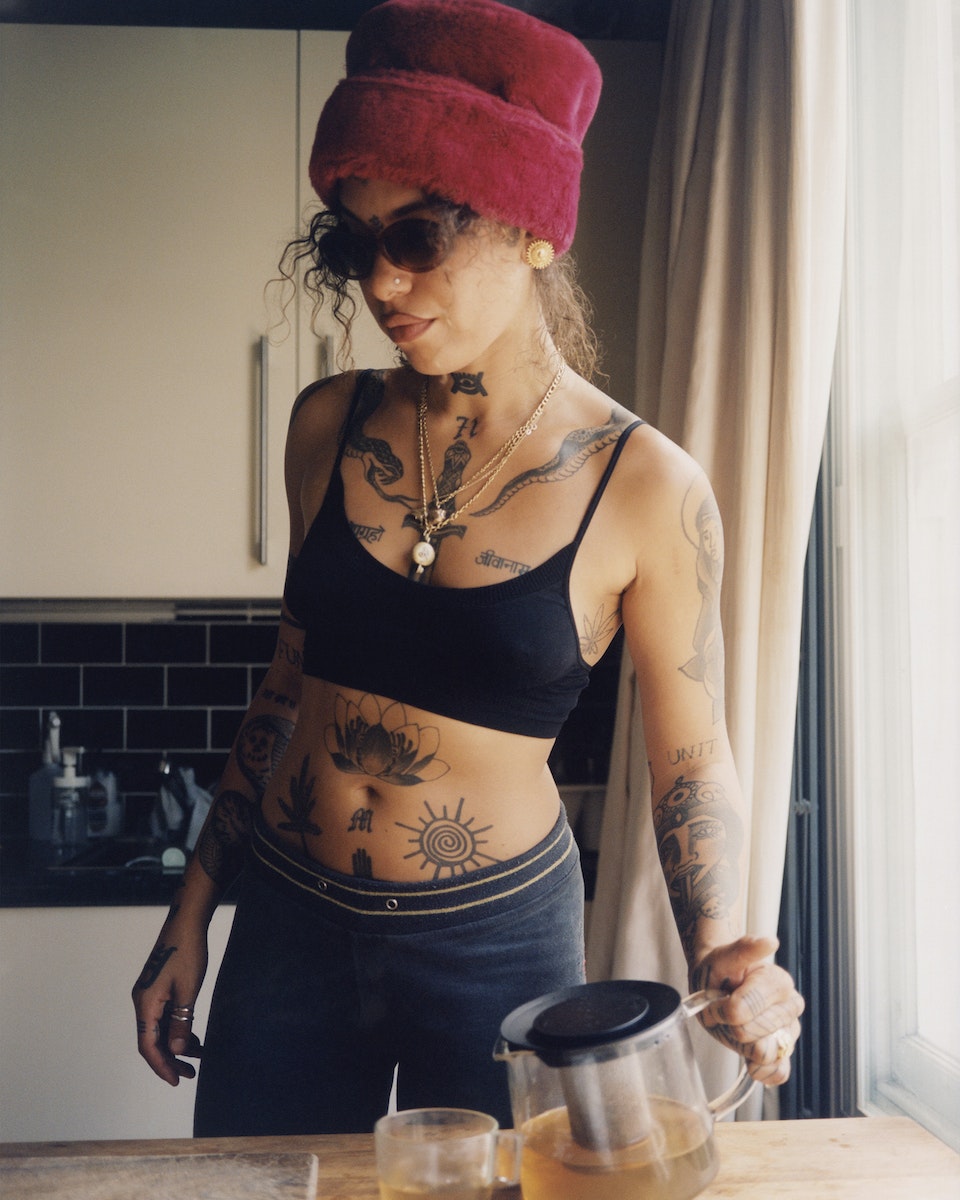 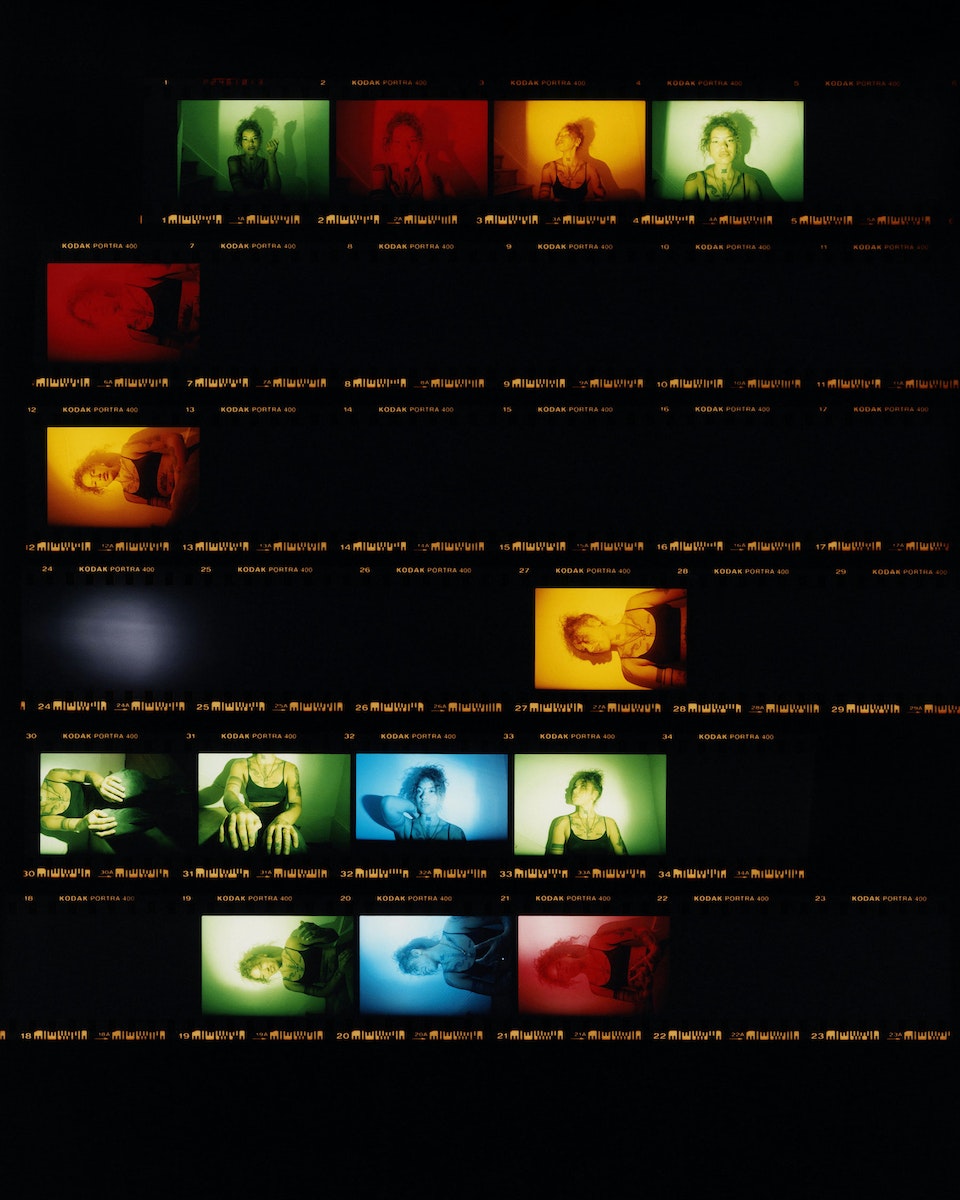 So what’s the story behind the name Greentea Peng? ​“I was in Peru and I went into a shop – I was already a big fan of green tea – and then I saw this mad packet of green tea called green tea seng. There was a picture of a woman on it wearing a bikini made out of green tea and I was like ​‘Oi, green tea peng!’. For some reason it stuck. Then, when it came to music, it just felt natural.”

So how much of the stuff does she drink? ​“I drink tea everyday – maybe not green tea everyday, but tea!”