Subcultures emerge from a shared collective energy. They are shaped by peer groups who embrace many creative disciplines, including art, music, photography, fashion and design. In turn, creators feed their own spirit back into the scenes around them.

With second lockdowns underway in many countries, musicians and creatives across the globe continue to white-knuckle their way through 2020, a year which needs no introduction. So how are they helping each other through? THE FACE has teamed up with Dr. Martens Presents for multi-part series Collective Creativity, which harnesses the power of collective creativity across the UK and Europe.

For the second feature in our eight-part series, we tapped up Berlin-based musical duo MADANII & L:LUCID and their collaborators, art direction duo Habibi and director Andjani Gatzweiler. Together, with the support of DMs Presents, the friends are collaborating on a video series and a zine, ORI3NTATION, which explores issues of heritage and identity.

“The idea behind it is to deconstruct or think about the term ​‘Orient,’” MADANII’s Dena Zarrin explains, ​“and ask people – especially creatives from Berlin with Middle East and North African backgrounds – what they think about that term and the stereotypes that come along it.”

On her Instagram bio, musician MADANII self-describes as ​“POC pop”. A childhood spent in a village in Southern Germany left MADANII, real name Dena Zarrin, deeply aware of her Iranian heritage. Fast forwarding, Zarrin now takes the outsider experiences of her youth and transforms them into dark, trap-powered electronic melodies composed with Iranian instruments such as ney, santur and kamanche.

Zarrin met producer Lucas Herweg at university four years ago and the pair quickly began working together. Until recently, they made music under the name MADANII, which was orginally Zarrin’s alter-ego, but now they have a new creative identity.

“More and more over the years from this being [my project], I really wanted to transform it to something really collaborative and beautiful,” Zarrin says. So it was that, over the past year, as Lucas has honed his own creative profile, a name change was necessary, and MADANII & L:LUCID came to life.

“We’ve been working like that forever anyway,” Zarrin laughs.

Their musical partnership began in 2016, at a time when neo-right-wing sentiment was building across Europe and beyond. In the US, Donald Trump came to power; in the UK, a majority voted for Brexit. In Germany and across Europe, people of colour were subjected racist rhetoric and discrimination.

“I just thought, there were a lot of misconceptions around representations of people of different backgrounds, from Arab countries predominantly, especially in Europe,” Zarrin says. ​“I have certain privileges that other people don’t have, I have a certain platform, and I wanted to speak out.”

The pair’s latest creative project is ORI3NTATION. Brought to life with the help of Dr. Martens, it takes the form of a video series and zine.

“The whole idea of ORI3NTATION is to talk about the feelings [which come from] growing up in [a] Western country, but not having a Western background,” says Zarrin. ​“That is also something that we deal with musically a lot. We play with elements of my Iranian heritage in the way that we can.” But she acknowledges that there are limits to her own experience. ​“I was born here. I grew up here. So even my insight into Iranian culture is super limited.”

L:LUCID, bringing in metal and trap influences, does likewise, in his own way. ​“Everything that we’re going through and processing [ends up] in our music,” he notes.

Listen now: MADANII on growing up in a Western country with Iranian heritage

Hamburg-based Imad El Rayess and Jessica Rees run the platform Habibi, making clothes embroidered with the Arabic word, Habibi: sweetheart. It is, they say, ​“a clothing brand with a culture-driven insight: to destigmatise Arabic lettering.”

ORI3NTATION’s videos and a contributor to the accompanying zine resource, for which Habibi are doing layout and graphics. Gatzweiler similarly works as a duo with her boyfriend Ivarr Jacobsen, the project’s DOP.

“Collective creativity is something that I’ve learnt to appreciate more and more. I can be quite the control freak,” Zarrin confesses, ​“so I need to do everything. And I don’t trust anyone to do it well as I would. So just being able to let go, put an idea out there and let other people take over.

“I think that is something that Lucas and myself have experienced time and time again over the last two years,” she continues. ​“We’ve been graced so many times by people just lending us their time and their talent to create something with us.”

Creation, according to MADANII & L:LUCID is born from a mutual sense of trust.

“You really have to find people who are passionate about something, and they believe in you, and believe that you can create something great together,” Dena Zarrin concludes. ​“I think that’s the beauty of the creative community.”

The Face: How did you come into contact with MADANII & L:LUCID originally?

Andjani Gatzweiler: That was a very funny, sweet story because I actually read an article about Dena on a very small page online. I tracked her down and found her music on YouTube, and during the time she only had two or three tracks. I thought they were amazing and fell in love with her music. So my partner [Ivarr Jacobsen] and I – who also did the cinematography for ORI3NTATION – we found a Facebook event where we just went and hoped to meet Dena there. My goal was to ask her if she was interested in doing a music video with us. It was quite difficult to get to Dena. But then backstage, I just ran to her and asked her, and she said yes. And it was the beginning of a beautiful [collaboration].

The Face: You’re the director of MADANII & L:LUCID​’s ORI3NTATION series and a contributor to the accompanying zine resource they’ll be creating for Dr. Martens Presents. Tell us more about the series and zine.

Gatzweiler: The zine is also still like a little mystery to me because many amazing creative kids are doing it right now. The main graphic design is created by Habibi.

[For the ORI3NTATION series] the shoot was really small, but so cute. We all did a lot and I’m happy to have contributed with my art direction. I was responsible for the set design, the photographs and the video edit. Everyone is like a small family and everyone tries to help the other because it’s so much. I noticed that everyone wants to make this project work.

The Face: Can you describe Berlin’s creative scene for readers who have yet to visit?

Gatzweiler: The great thing is that everyone [is] so ready to work and very motivated and passionate about everything. We have so many talented people in Berlin. And at the same time, I have the feeling that there’s just not enough money for them. So Berlin is a great city to grow creatively. But if you actually want to make a living of it, I feel that you need to also spread your [antenna]. I feel like you will be able to create projects easily in Berlin if you have a vision. If you have great ideas and if you just have the energy to do it, it will be easy to find the right people.

The Face: What does collective creativity mean to you in 2020?

Gatzweiler: Right now, it means something else today than it did a few months ago. I think last year it was a term that was much easier to understand. Because [before Covid], you were able to collectively meet and greet in person and find the people you need. But now it’s more about finding really new ways to meet, new communication strategies and stuff like that.

Everyone is overwhelmed right now. But at the same time, everyone still wants to do something. The best thing that happened to me was that I decided to tell the people that I collaborate with to slow down. And I did that myself. Then we found [we could] work together in more healthy ways.

The Face: How have you, MADANII & L:LUCID supported each other through the challenges of 2020?

Gatzweiler: Not only have they helped us find people who want to work with us, we always know we can ask each other [for help].

The Face: What does Habibi mean to you? And why did you start the clothing brand?

Imad El Rayess: Habibi means ​“sweetheart”, and it’s actually a really lovely name for everyone. You can say it to men, to women. You can say ​“you’re my Habibi” when I like you.

It started when my best friend had his birthday three years ago and I wanted to gift him a sweatshirt. I stitched Habibi in Arabic on it. I gave it to him and, two weeks after, he came back and said that a lot of people thought he was in ISIS or that he had converted [to become an Isalmic extremist]! This is how it started.

Jessica Rees: The beautiful thing about Habibi is that anyone can say it to anyone, and [it’s] kind of a way of saying ​“friend”.

The Face: How did you come into contact with MADANII & L:LUCID?

Rees: We met them over Instagram. We have been doing Habibi full-time for a year now and Instagram gave us such a huge platform to meet and work with people that have the same drive, energy and vision. We love their work, especially their music, and now we’re really excited to collaborate with them… [on] the layout of ORI3NTATION. They interviewed artists, musicians and podcasters in Berlin with different backgrounds, people with non-German roots. They ask them what their takes on ​“the Orient” are.

The Face: What have you been working on during Covid? Has lockdown allowed you to explore any unexpected creative projects?

Rees: We had the opportunity to work on things internally. We were suddenly forced to become professional, with a new website. We grew without ever putting money into advertising, so the way we grew was all organic. We only started doing Facebook and Instagram ads in April. That was a big step for us, since we’re a two-person band here.

El Rayess: I think Covid challenged creatives to think in different creative ways because everyone was at home. We did a FaceTime shoot in the hard lockdown in Germany, where we called our community, talked about Habibi and took screenshots.

The Face: How have you and MADANII & L:LUCID supported each other through the challenges of 2020?

Rees: It sounds really cheesy, but reposting. Now that we’ve grown as a brand, we have the chance to give our platform to people we believe in and love. I think the community has really grown this year.

El Rayess: With MADANII, it’s a friendship and a collaboration.

Rees: They’re really enthusiastic about their work and what they believe in. And I think that’s why we work so well together.

The Face: What does collective creativity mean to you in 2020?

Rees: I think the energy and the possibility that you can meet people from anywhere, as long as you have the internet, has accelerated.

El Rayess: This year was challenging for everyone. My feeling about this year is that creators stand together. They’re trying to work together because everyone is facing the same challenges. Everyone has had to struggle with the situation.

Rees: Working with other people and collaborating is so empowering. It inspires you. 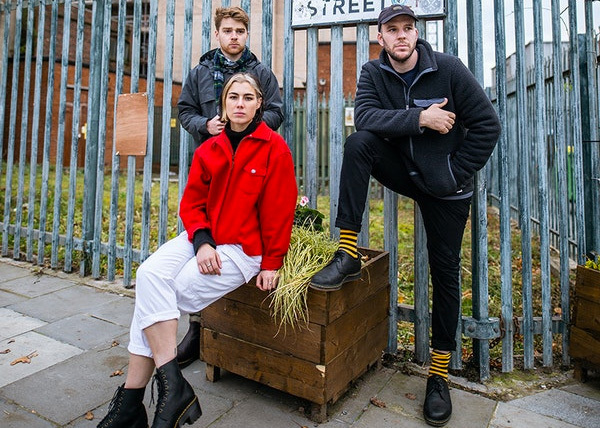 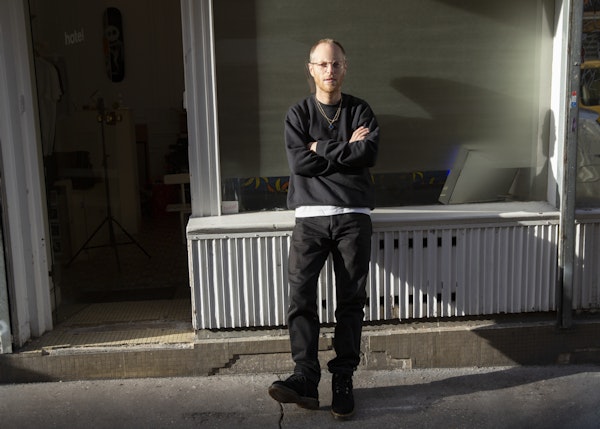