Under the dull hue of mid-winter England, in the outskirts of Greater Manchester, a group of animal rights activists wait for a mass of dogs and red jackets to protrude against the bleak landscape. It’s a scene that is taking place across the country, as this year’s season of fox hunting – an archaic blood sport occurring across rural Britain – is in full swing. But this is no off-the-cuff protest – this is a skilled vigilante operation, perfected over decades of on-the-field action, designed to disrupt the hunt through non-violent and direct action.

“It can be life-threatening,” a member of the Manchester Hunt Sabs, who goes by his sab pseudonym Alec, explains. He describes a time when, just this year, a member of the Staffordshire Hunt Sabs they were working with was hospitalised after being trampled over by a horse. “[Fox hunters are] in their own bubble,” he continues. ​“A lot of the time they don’t think about their actions – they were galloping horses towards sabs who were legally walking across a field on a footpath. It’s safety in numbers – you just have to stick together and try to deescalate wherever possible.”

Alec has been hunt sabbing annually for the past twelve years, initially introduced to it while living in a squat with friends he’d met through the local punk scene. In his latest stint, the vigilante decided to use his photography skills to capture one season of hunt sabbing, released through a 36-page print zine, with all proceeds donated to his local animal sanctuary. Aggravated Trespass is a raw and unfiltered window into the life of a hunt saboteur. Straight from the field and onto paper, it lays out the reality of the fox hunting industry and the saboteurs that have been disrupting it since 1964; the good, the bad and the ugly.

A street photographer outside of his sabbing life, Alec wanted to use his unique style to document the vigilante action. One of the most pertinent images in the zine shows a member of Manchester Hunt Sabs who was allegedly ​“beaten up and left for dead in the woods” by badger baiters, another illegal blood sport, which Alec infers has links to the wider fox hunting community. 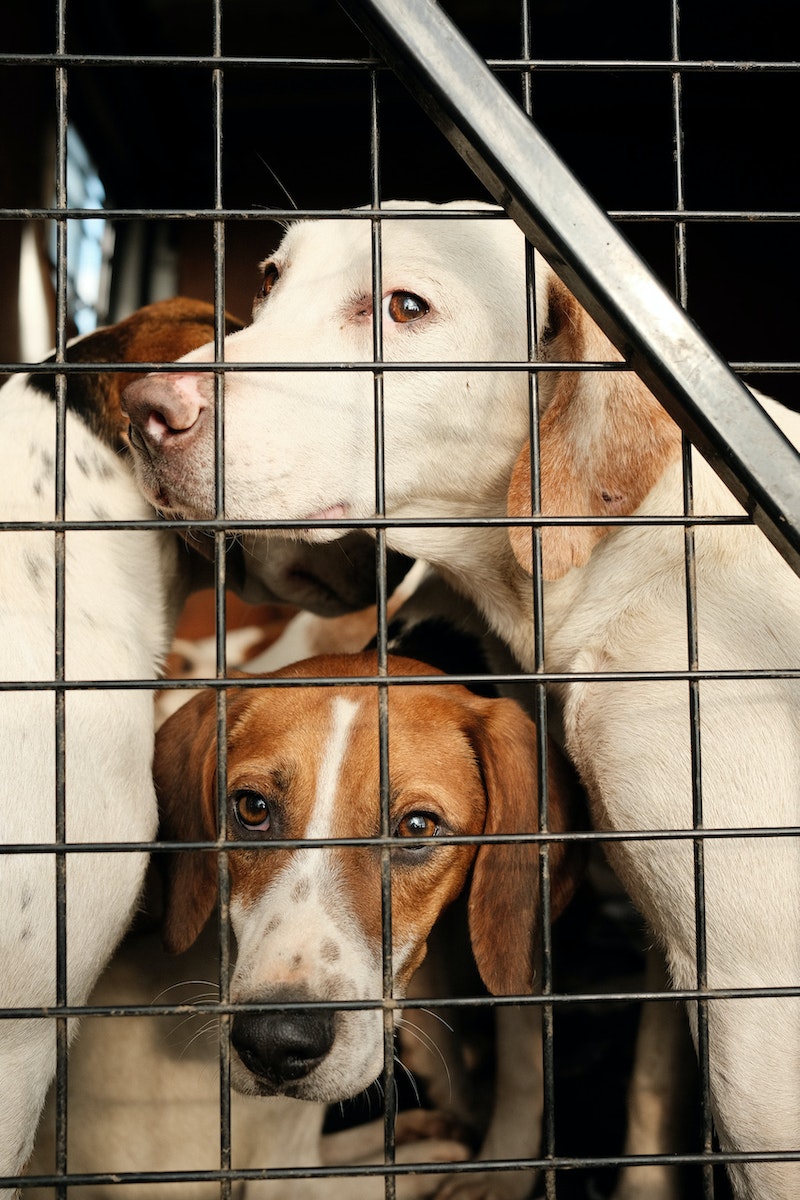 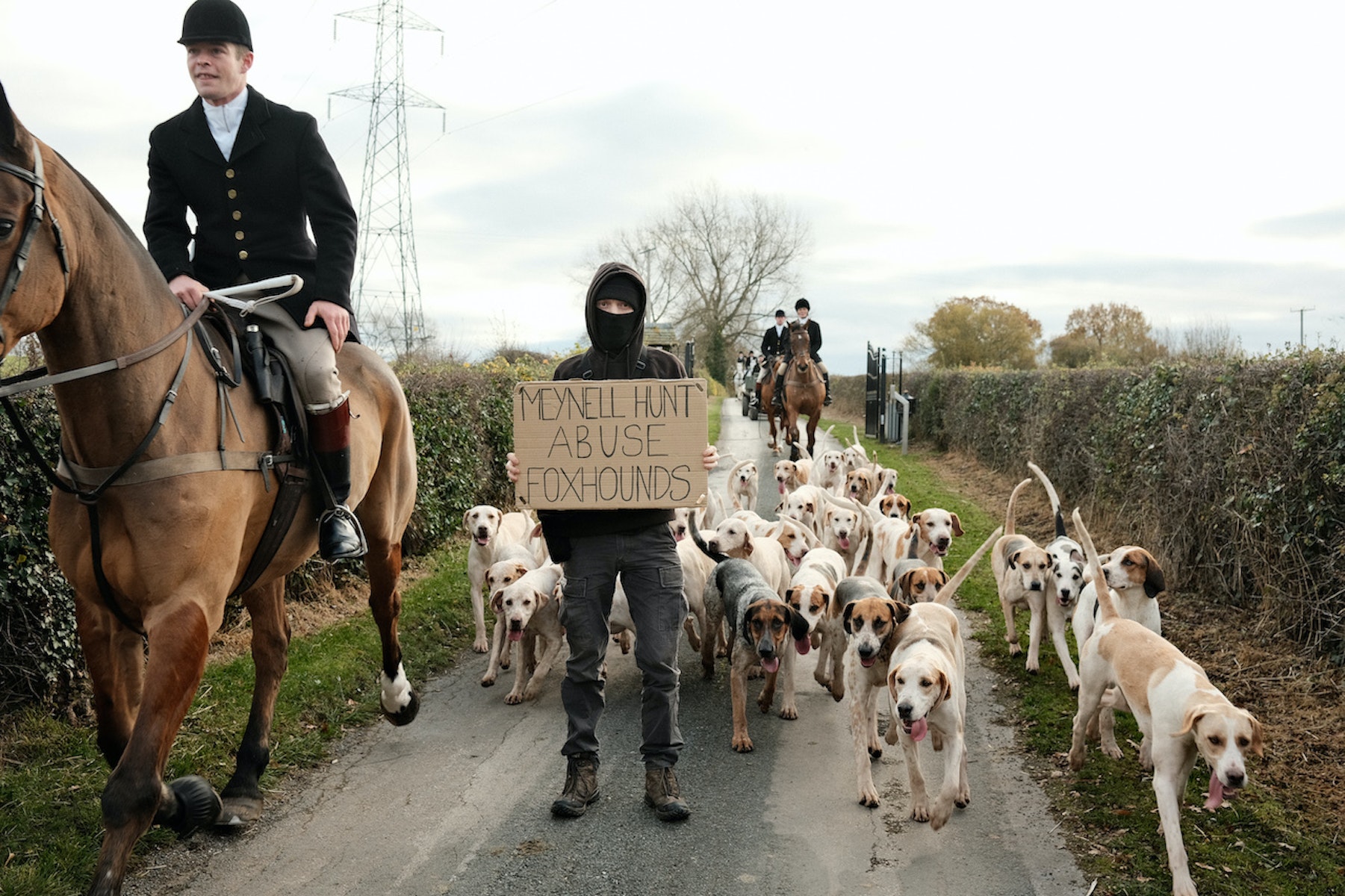 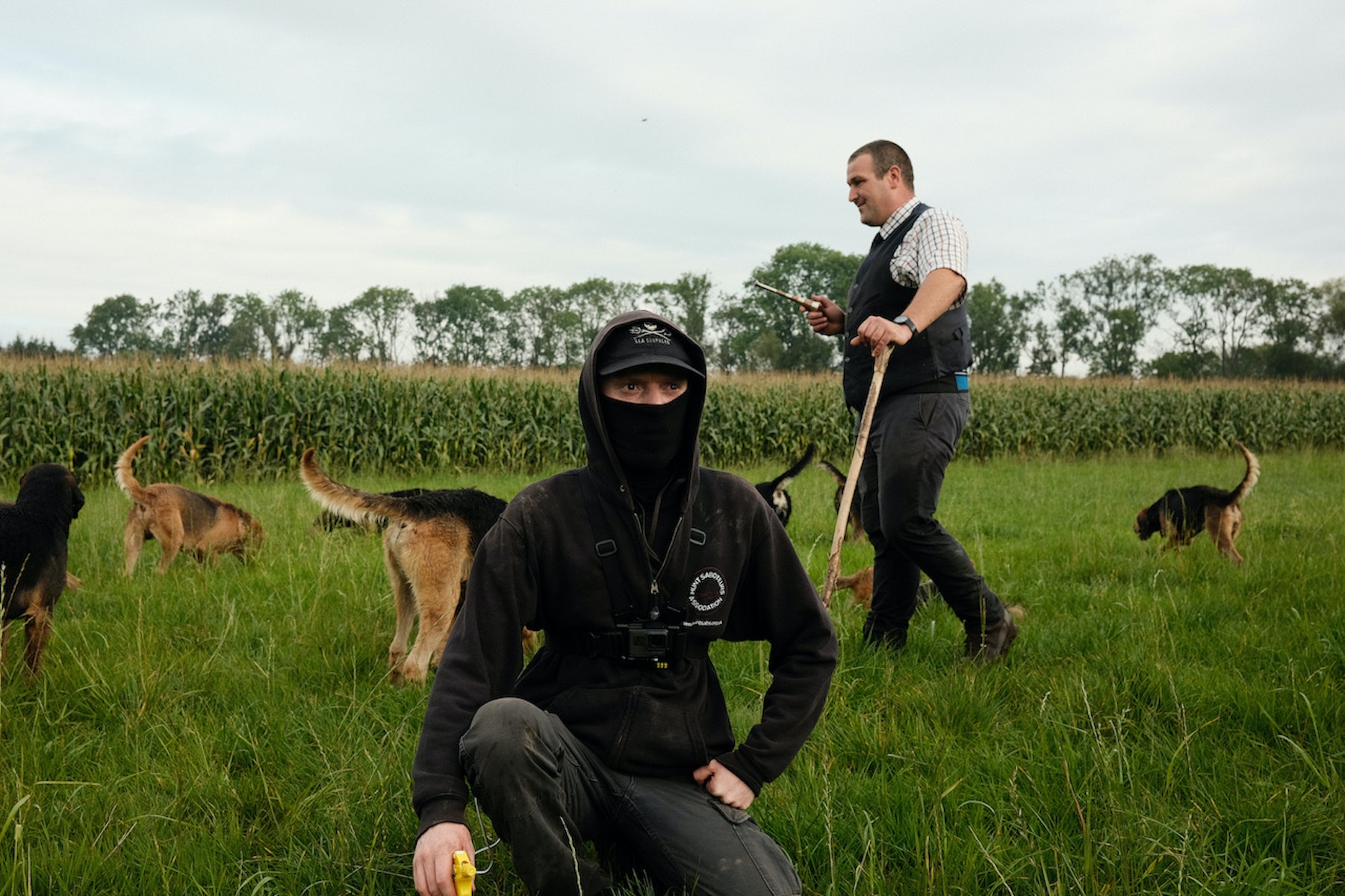 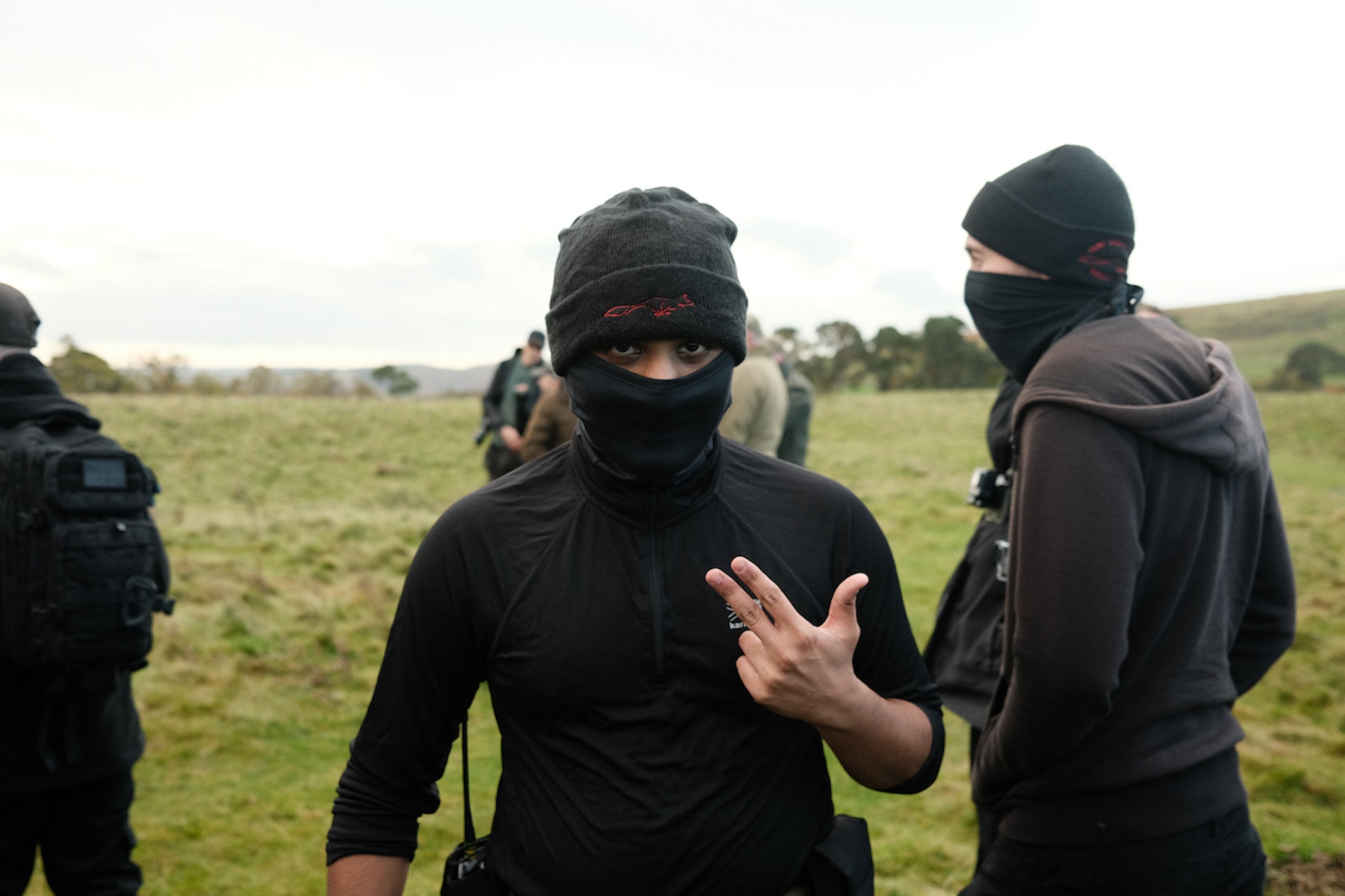 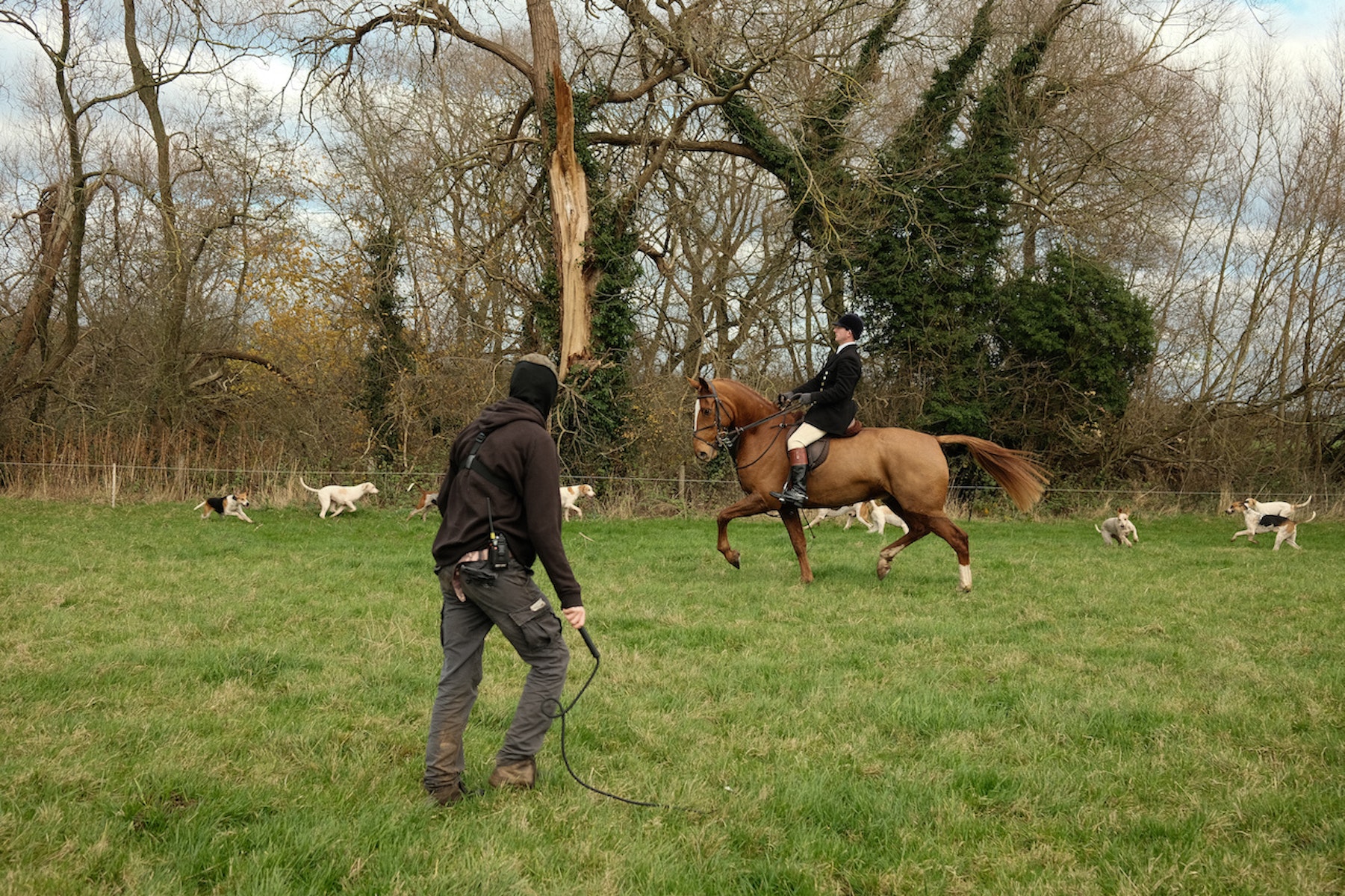 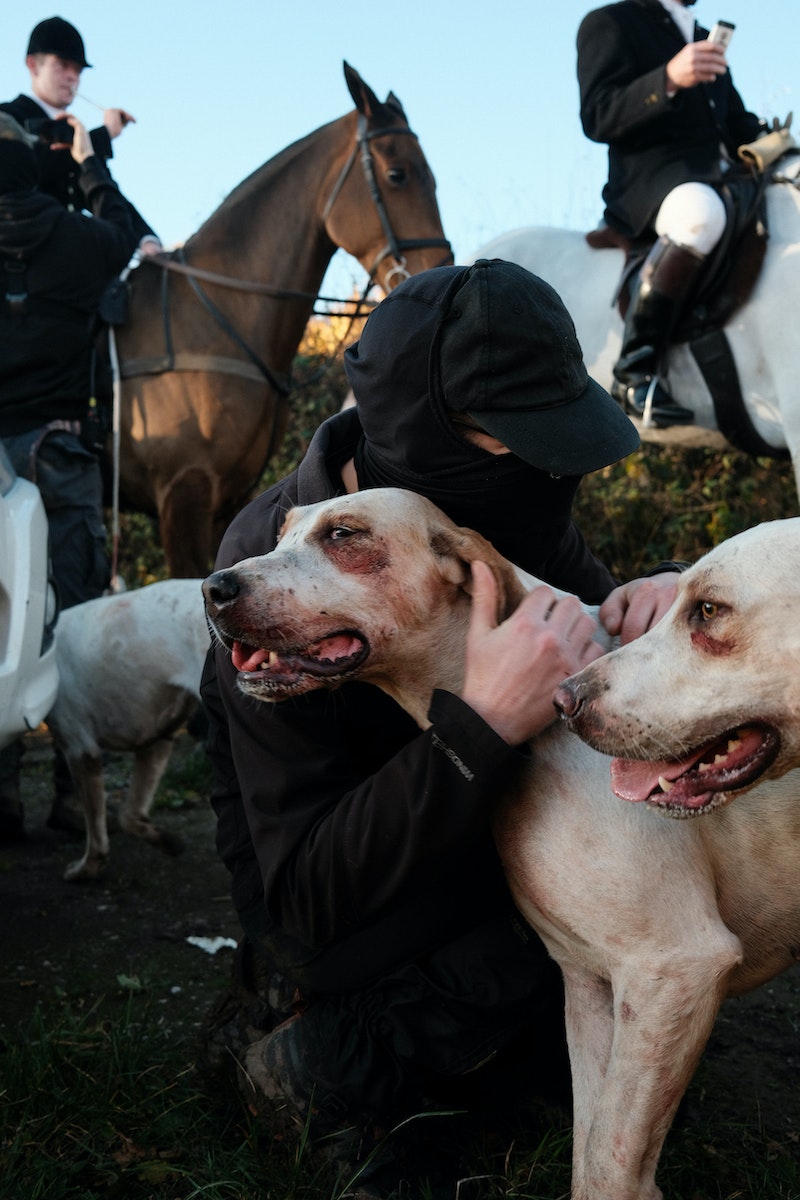 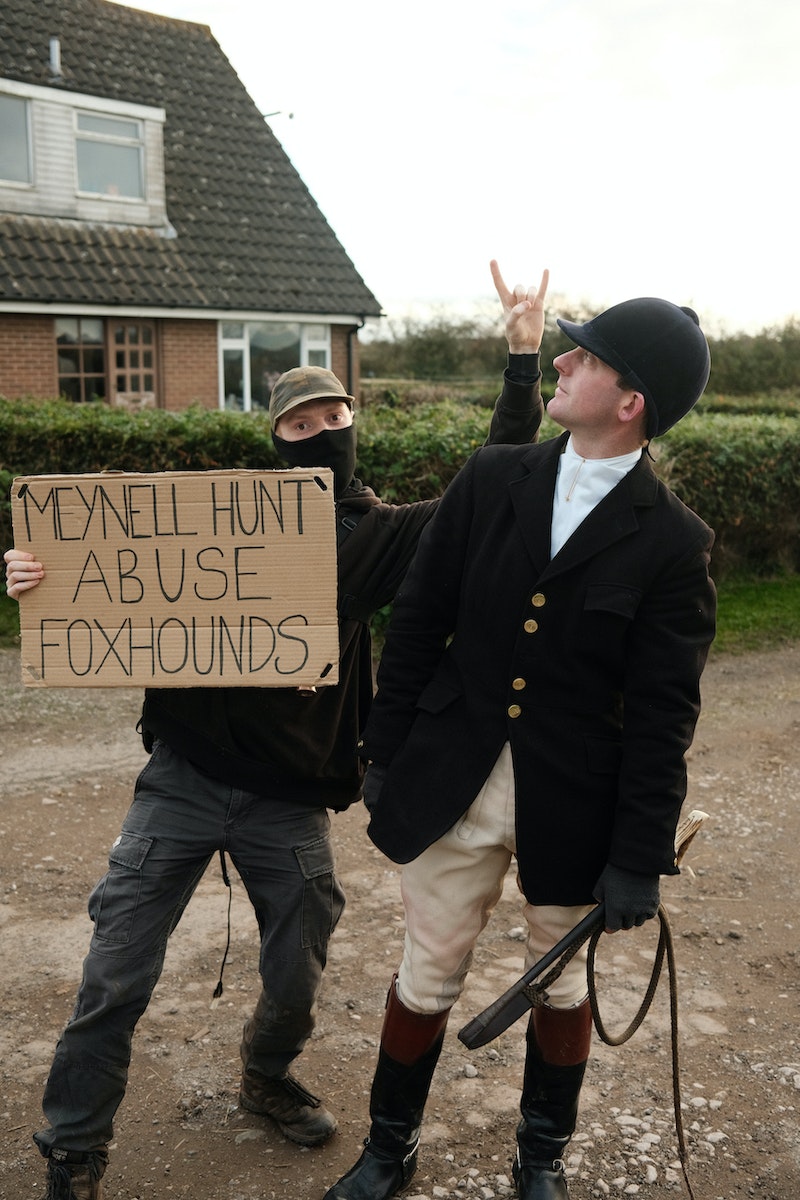 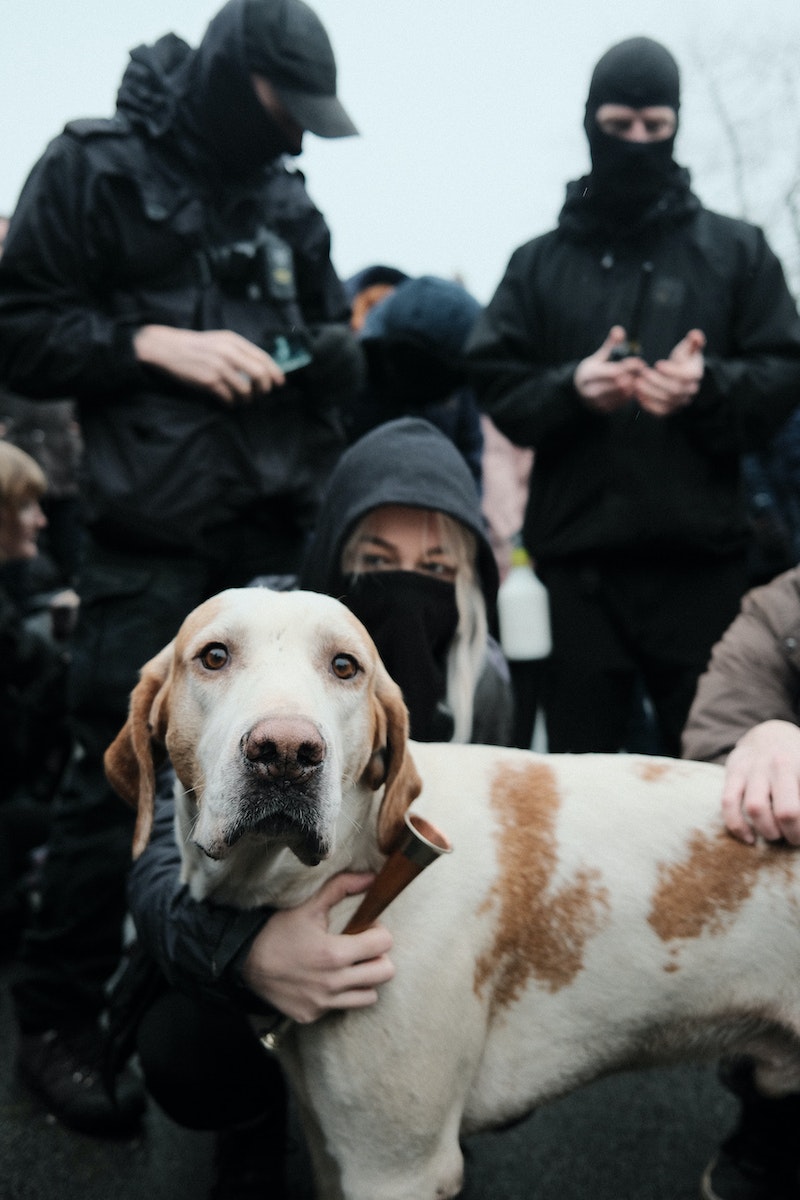 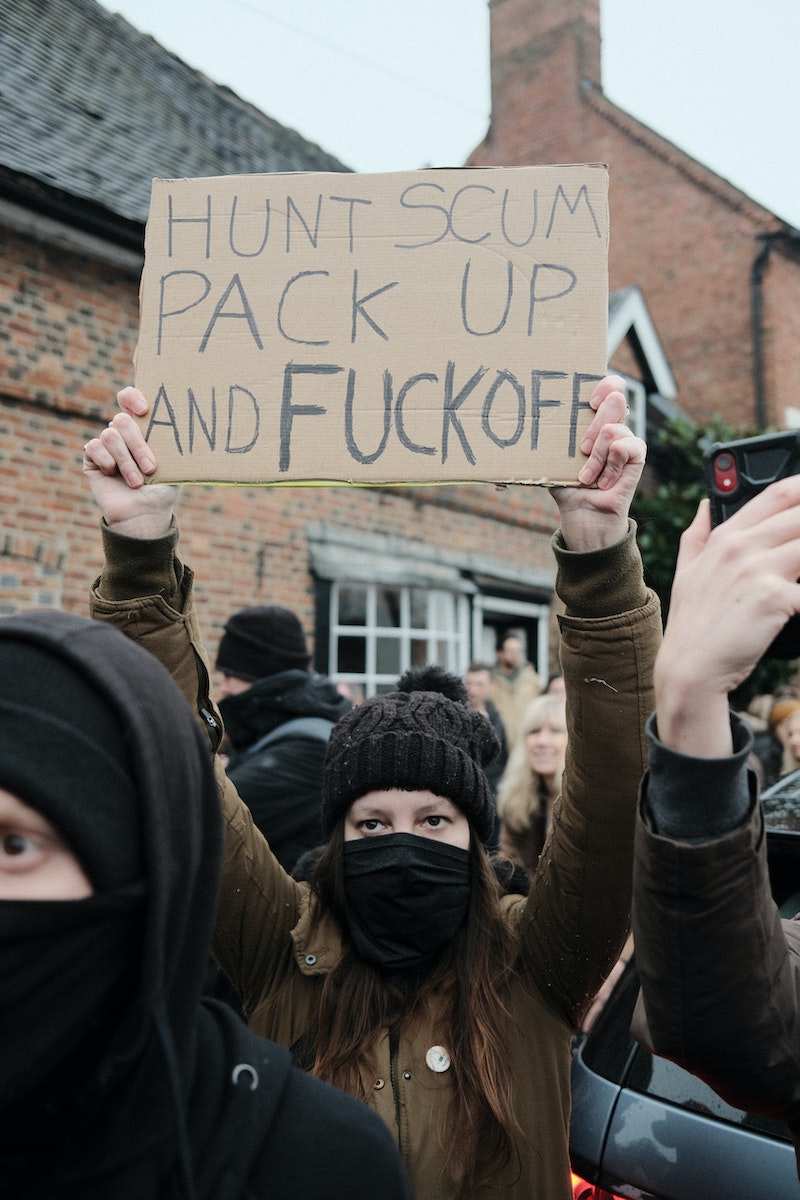 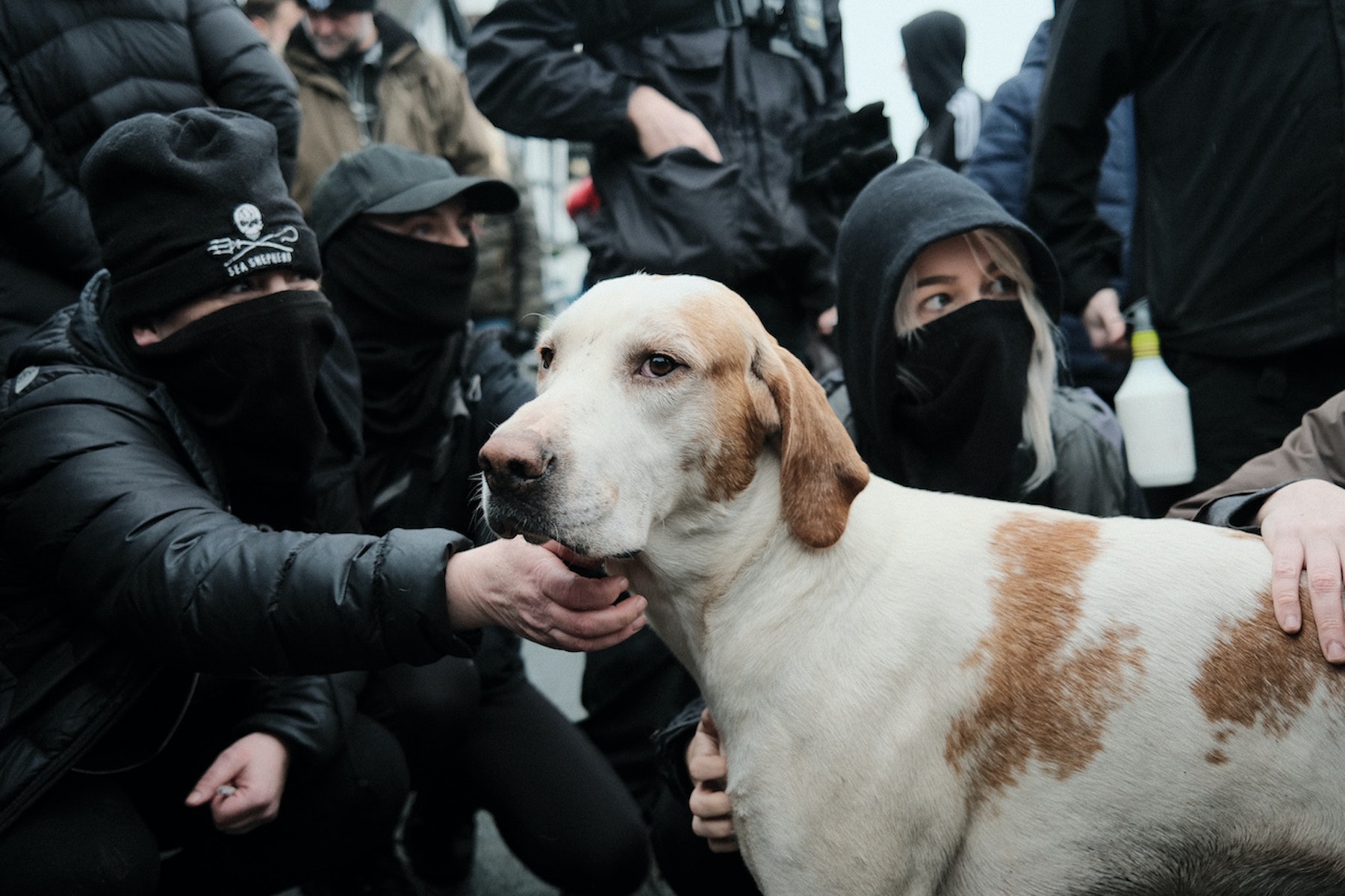 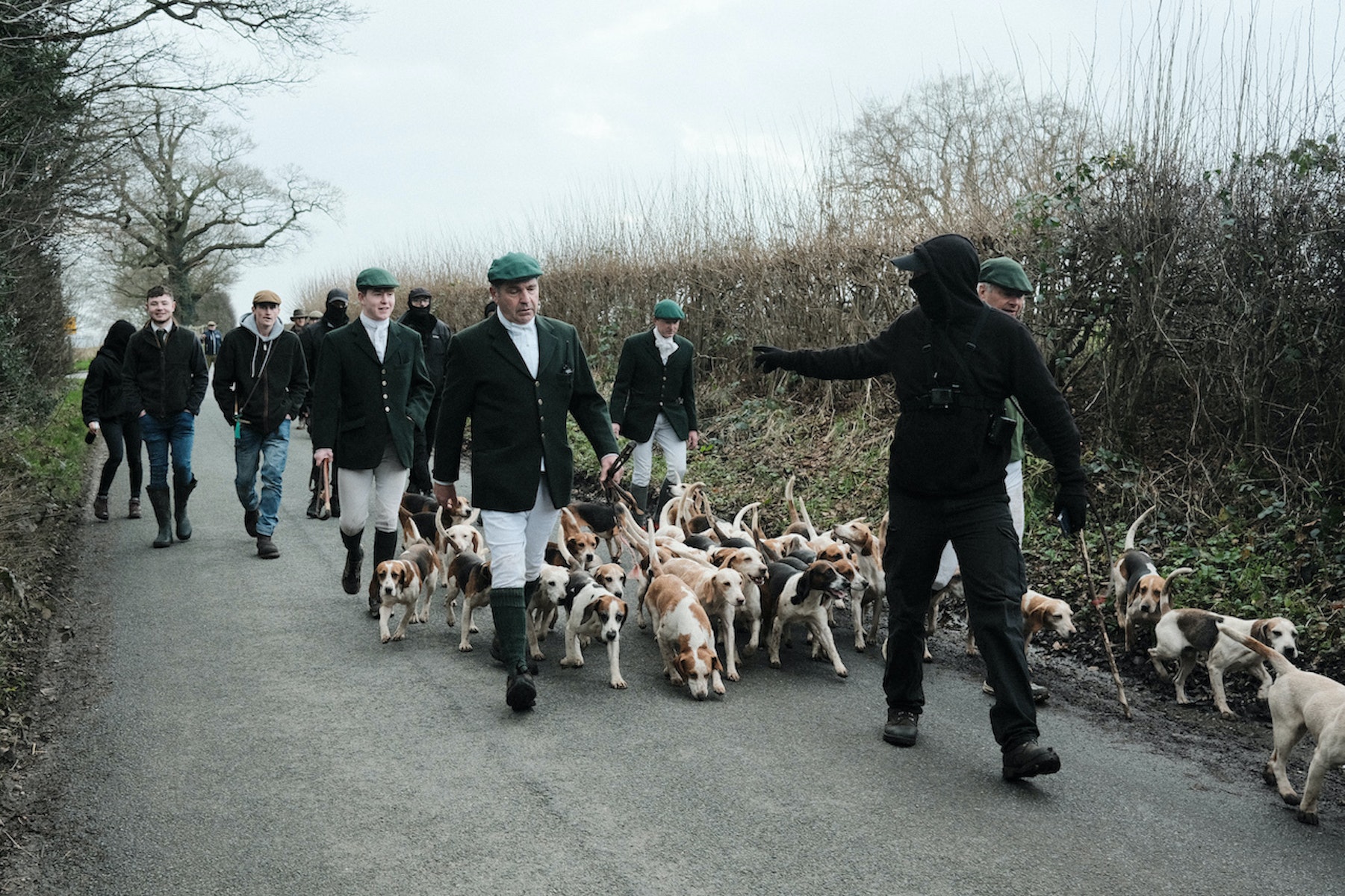 “These are the type of people we’re dealing with,” Alec says. ​“They like to portray themselves as a postcard, family-friendly version of themselves – traditional and dressing up nice – but the underlying truth is that it’s these types of people who are supporting the hunt.”

Fox hunting is a tradition that has plagued rural Britain for centuries. The season stretches from autumn to spring, with over 300 registered hunting groups across England and Wales. On notable dates, such as the Boxing Day Hunt, the blood sport draws crowds in the hundreds of thousands. In 2004, Labour attempted to put an end to this tradition through The Hunting Act, which prohibits the hunting of foxes and wild mammals with dogs, becoming law the following year.

To remain within the boundaries of the law, post-ban hunts supposedly set artificial trails to protect foxes from being shadowed by hounds, in a process called drag hunting. Unfortunately, this is far from reality, with the lives of countless innocent animals still claimed by the hunt each year, leading saboteurs to take matters into their own hands.

Sabs have a wealth of tools in their arsenal: placards; whistles to warn foxes; sprays designed to mask the fox’s scent; radios to communicate – all crucial in their mission to save the lives of the animals. Masked in balaclavas to protect their identity, each sab is armed with a body camera to protect themselves from potential skirmishes with angry huntsmen.

The confrontation between animal rights activists and hunters can become heated and potentially deadly. Although in recent years there have been no deaths from direct confrontation, the 1990s saw the deaths of two saboteurs, Mike Hill and Tom Worby. The danger comes with the territory, but for Alec, it’s the purest form of direct animal rights activism. ​“You can see the difference in real-time; you can see the life you’re saving right in front of your eyes.”

To the average person, fox hunting may seem like a far-flung and distant pastime, reserved for the wealthy elite along with wine cellars and catered ski chalets. But in Alec’s experience, this is far from the truth, going as far to say that the hunting industry doesn’t revolve around social class at all. ​“You get some hunts that are very prestigious, coming from a long life of the aristocracy and frankly they’re pretty posh – but that’s just a stereotype.”

“There are actually plenty of hunts which are very working-class,” Alec argues, adding that the class narrative ​“perpetuated by hunts and [pro-hunting organisation] The Countryside Alliance” to ​“discredit” hunt saboteurs’ actions is nonsensical. ​“They try and say it’s a class war – that we don’t actually care about animal rights and that we’re jealous; jealous that [hunt-goers] have money and [hunt sabs] don’t.”

The Hunting Act has been a monumental legal letdown. Article 1 of the ban states that ​“a person commits an offence if he hunts a wild mammal with a dog”, but adds: ​“unless his hunting is exempt,” listing nine reasons why a hunter may flout the ban. Alec notes that these ​“loopholes” are being used by hunters to continue their inhumane bloodsport. One common tactic is to exploit the exception of flushing out foxes to help birds of prey hunt – indicated in a BBC report where huntsmen were shown to take their birds of prey along with them, but never actually let the eagle loose.

Despite sheer inadequacies of enforcement, Alec does admit the legislation has made some tangible difference. ​“It has shifted the police from one side – not from one side to the other, but to a neutral ground. Before the ban, it was perfectly legal to hunt and if you were going out to sabotage the hunt it was illegal.”

Currently, there is little data available to the public on the amount of prosecutions made under the Hunting Act; between 2005 and 2018 the number was reported to be 497. While not all hunts spiral out of control, when they do, the consequences can be alarming. Countless have reported pets being caught in the crossfire, with two dogs allegedly attacked by hunt hounds last year. This, sadly, comes as no surprise as the industry the hounds are bred into teaches them to hunt and kill.

Alec believes the industry is in ​“terminal decline”, in part due to diminishing public support. A culture so deeply rooted in tradition has meant the hunt has been unable to ​“move with the times”. In 2017, British people were polled on their attitudes towards the industry, of which 85 per cent thought that fox hunting should remain prohibited. That’s in addition to shifting attitudes towards veganism and ecological protection that are rapidly entering the mainstream. Hunters have essentially ​“shot themselves in the foot,” according to Alec. ​“The last 12 months have been a disaster for them in the public realm. In the last year mainstream news has covered hunts more than ever and it’s all been negative.”

Not only are hunts losing public support, they’re losing land, too. As recently as last year, one of Britain’s biggest landowners, Natural Resources Wales, announced it would ban trail hunting from taking place on its land. ​“Hunts are folding. Year after year, people are moving from the city and stopping hunts on their land. I don’t think we need government intervention at this point. It would be great if they could tighten up the ban and actually enforce it, but I think hunt sabs are putting on enough pressure. We will see an end to fox hunting in the next 10 to 20 years.”