Fancy a creative juice cleanse? While summer might not be ideal for a detox, it’s the perfect time to refresh your creative outlook, whatever your vocation might be. Maybe it’s the Vitamin D, but summer just hits different and those long days make us want to explore new creative pathways – and turns out it’s just what Docs ordered.

For its new campaign, footwear giant Dr. Martens has enlisted the creative direction of director, model and activist TJ Sawyerr, encouraging him to reframe the season’s new silhouettes via his razor-sharp vision and step into their shoes for a (long hot summer’s) day.

With creative chops as versatile as Docs themselves, TJ directed, styled and shot three friends and collaborators in this season’s silhouettes: videographer Hass, rapper Aytrn, actor Rio Thake, as well as a more-than-cameo appearance from himself.

“There was a loose stimulus that I was able to take and put my own spin on,” TJ explains when we catch up to talk about the DMs project. ​“We put the shoes in the context of the talents’ everyday lives, showing them in the workplace, in their local area with friends, doing what they do and encouraging more people from their background or area to try and do the same.”

Nineteen-year-old TJ might only just be getting started in the industry, but his laundry list of experience makes most of our CVs wilt. Modelling for the likes of Martine Rose at just fourteen and kickstarting cult project ECSTASY while still a sixth former, he’s a powerhouse to rent. ​“I think I was the youngest director of a fashion week show… to walk in a show that I’ve curated broke a lot of boundaries and opened up some doors for me as a then-eighteen-year-old,” he says.

TJ chose a creative from a different corner of London, and paired them with style of Dr. Martens shoe that matched their vibe. ​“I had a conversation with each of them beforehand. I wanted to cater to the personal style of the talent, because any imagery where somebody is fully comfortable in the product takes it to the next level,” he explains.

Hass was matched with a high-top option to fit with his love of ​“oversized nineties clothing and boots“, Rio landed himself the loafer to ​“formalise” his elevated style, while TJ and Ayrtn each took different variants of the Smooth Leather 1461s to work with their street-style sensibilities and keep up with active work schedules. Ayrtn’s shoes were the new Iced variant – featuring translucent soles to match whatever cold drink you might find yourself inhaling this summer.

Whatever you want to do creatively – from shooting film to spoken word – Dr. Martens shoes, TJ explains, will work. ​“The shoe itself does a lot of work for you; it’s a staple piece. I’d never considered wearing it as an active shoe, but on the day of filming we were running around spraying water bombs and stuff!” Noted for our next water fight.

The resulting shoot is as deliciously organic as an actual juice cleanse. It’s an ode to the simple pleasure of kicking around town with friends in summer, enhanced by TJ’s own experiences. “[It’s for] a younger version of myself, for whom I wish there were more kind of provisions or opportunities or more people to look up to and say ​‘I can do this, there’s someone like me who looks like me who’s doing this.’ ”

To find out more about their creative endeavours, we made like TJ, Hass, Rio and Ayrtn and slid into their DMs.

Where are we going to find you wearing your DMs this summer, and what will you be up to?
I like to get around and see new things, so my DMs will naturally be pretty well travelled by the end of the summer. Hopefully before next year they’ll have seen every continent (yes, Antarctica included).
How does summer affect your creative work?
I definitely get a fresh wave of creative inspiration when the sun comes out. Nature is at its most beautiful, people are outside, energy levels are high. There’s no better time to be a creative than the summer; that’s when I’m really able to think outside the box and collaborate most freely.
What helps you smash through a creative block?
Having time to myself is super important for my creative process. Life can move super fast sometimes when I’m in heavy work flow, so being able to step back and remove myself from the chaos is always when I find myself working most efficiently towards future master plans.
What’s on your summer playlist right now?
I’m literally just listening to my people’s music all summer. The likes of Sainté, Feux, Knucks and Lord Apex are setting the vibe for me this season. Throw a bit of Mos Def and Masta Ace in there on an old-school flex and that’s an ideal playlist right there.
When was the last time you stayed up until sunrise? What were you doing?
I’d be lying if I said this was a rare occasion. Often times my most fruitful time for creative brainstorming is at night, as it’s one of the few times I have entirely to myself, so I often find myself getting carried away, plotting until it’s so late that it’s early. Definitely not a stranger to an all nighter!
Where do you see your work in five summers’ time?
The MET. 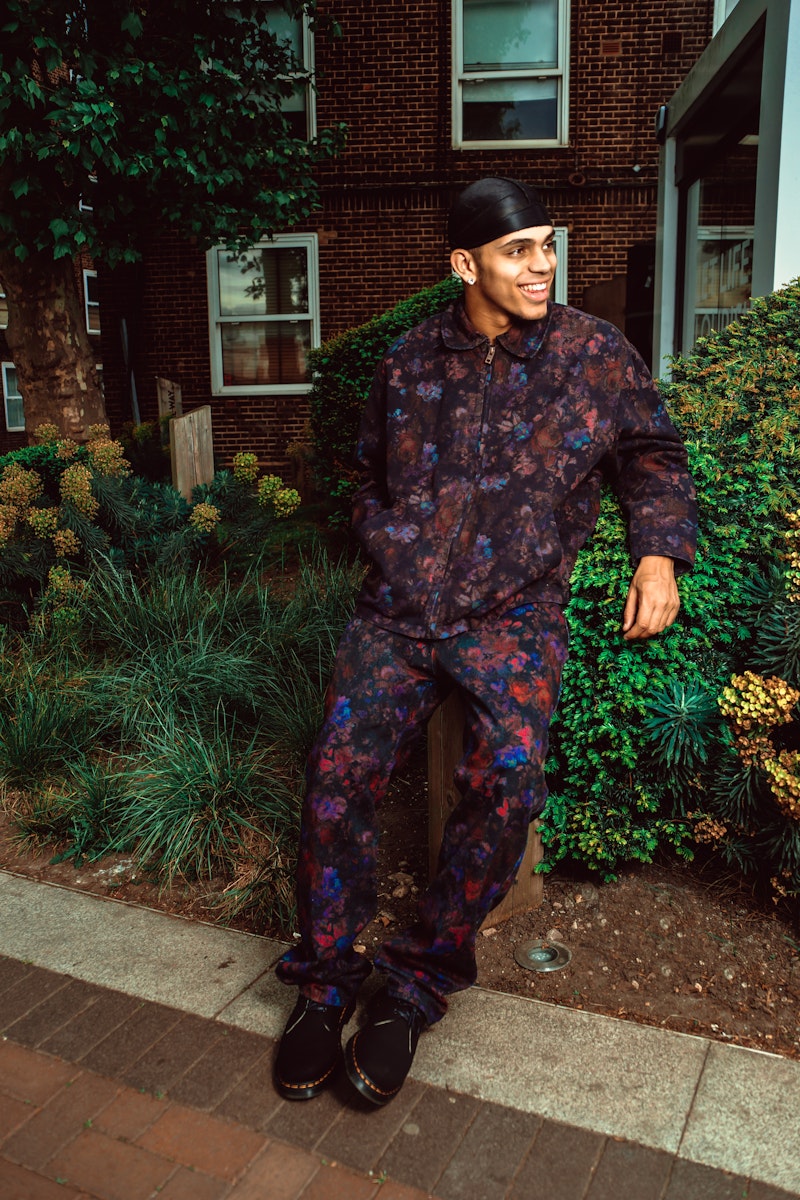 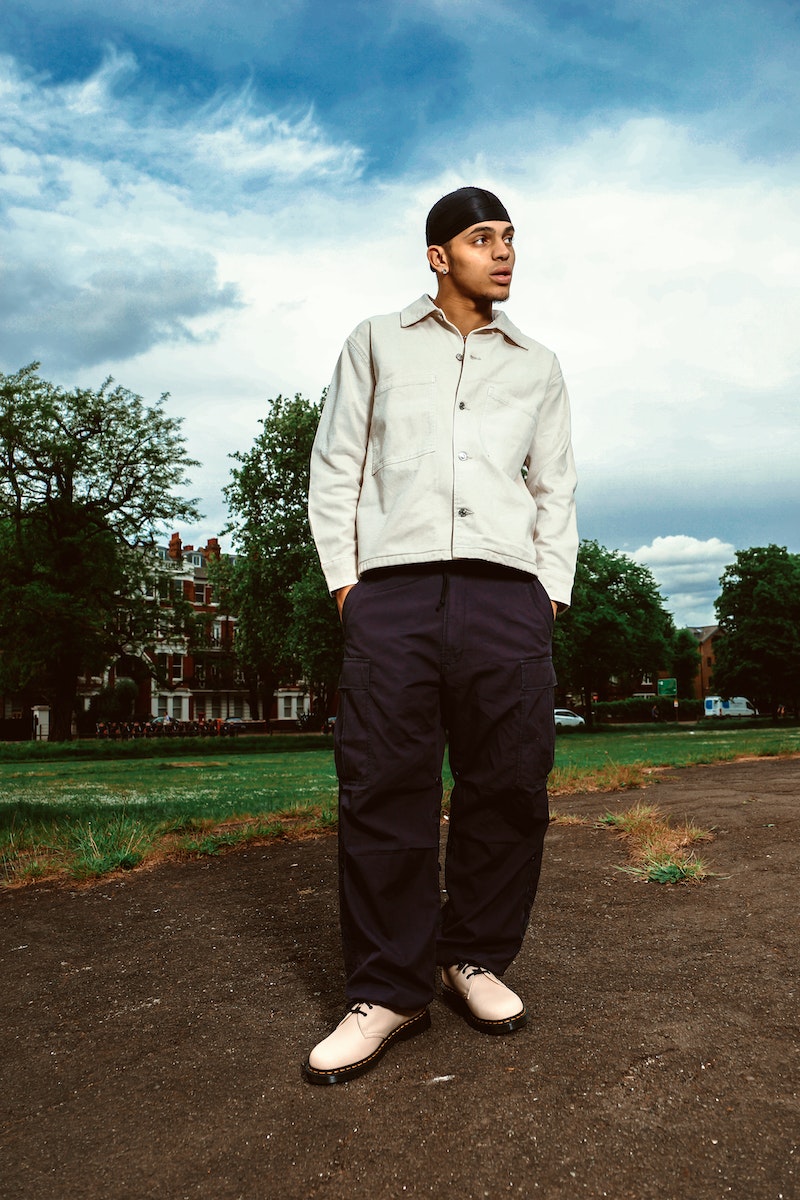 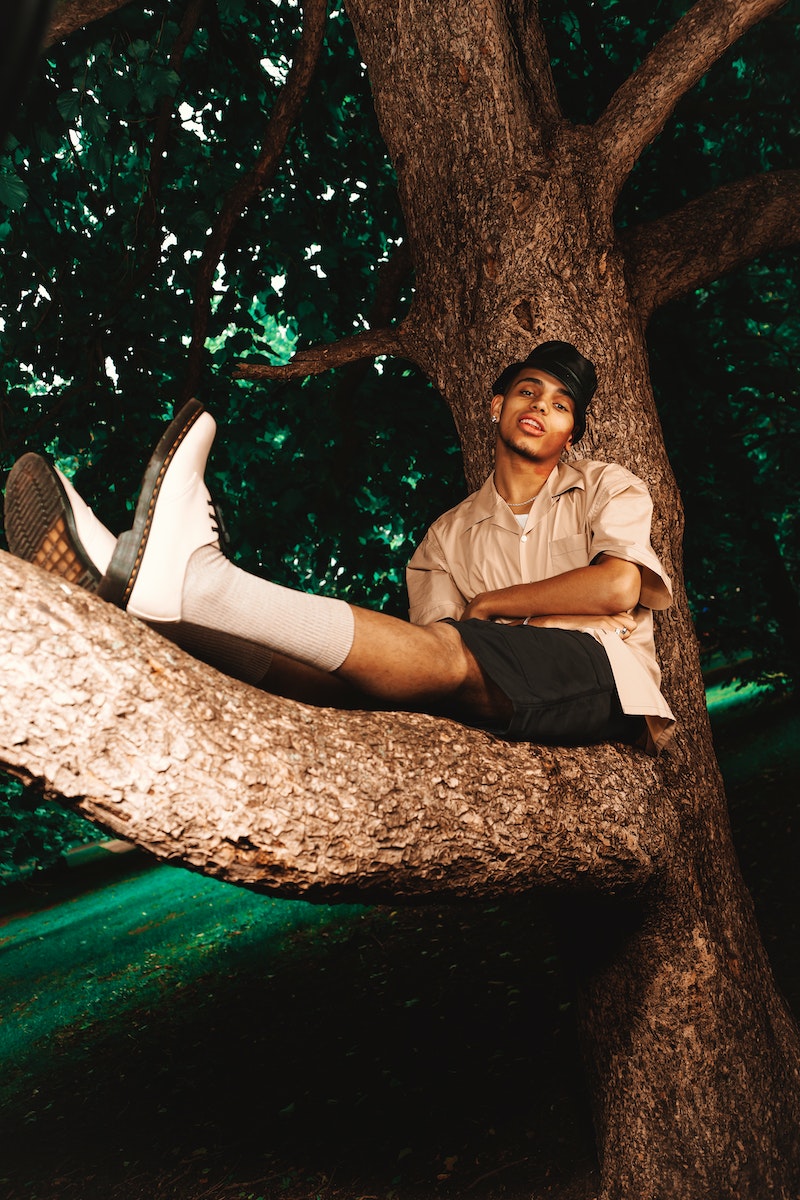 Modelling since the age of thirteen for the likes of Helmut Lang and MISBHV before becoming a runway mainstay for Virgil and Louis Vuitton, Rio Thake splits his made-the-most of time between fashion and acting. Fresh from walking for Rhude and AMIRI for SS23, next on Rio’s spinning plate is his first feature film ​‘Trapping’. Rio wears the Adrian Mono Suede Tassle Loafers.

Where are we going to find you wearing your DMs this summer, and what will you be up to?
You’ll probably see me wear them a lot, as I’ve been going through a very vintage (well, I don’t like that word, I’ll say experienced) style which is like a 67-year-old Italian man. Out with friends and riding bikes, just doing me.
How does that style translate to your summer wardrobe?
Summer is all about a colourful, free spirit — shorts and loafers!
How does summer affect your creative work?
Summer is always a more happier time for me, I get to leave my house without freezing haha! I think a lot more projects happen in the summer for me because I shoot a lot of work outdoors so the weather always helps. The energy is 10x cooler and chill which I always like to be.
What helps you smash through a creative block?
Three things: 1) Travelling alone, which I do a lot, 2) Meeting new people and listening to their perspective on things and observing them, 3) Music, music, music! I love that shit, there’s always a start, middle, bridge and end. It’s a story.
When was the last time you stayed up until sunrise? What were you doing?
Last time I stayed up until sunrise was a on Sunday; it was my last day in Paris and I became friends with this girl who’s an artist, she’s French. She had such cool work and such a great vibe that I didn’t even see the time. We walked through Paris after a party until 8:30am. I don’t usually do that; I’m asleep by 10pm most nights.
Where do you see your work in five summers’ time?
I see my work on billboards, in those elite rooms, in cinemas if they still have them, in schools. I’ll still be the same guy, just more wise. 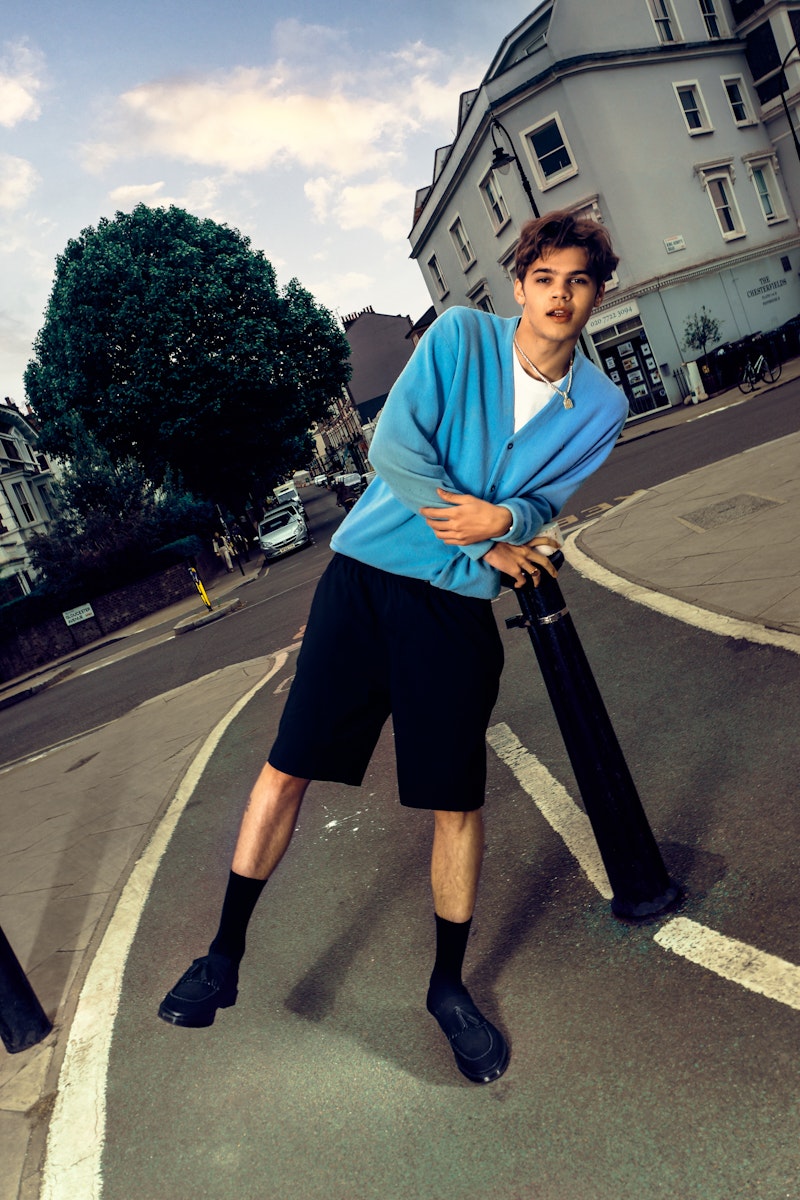 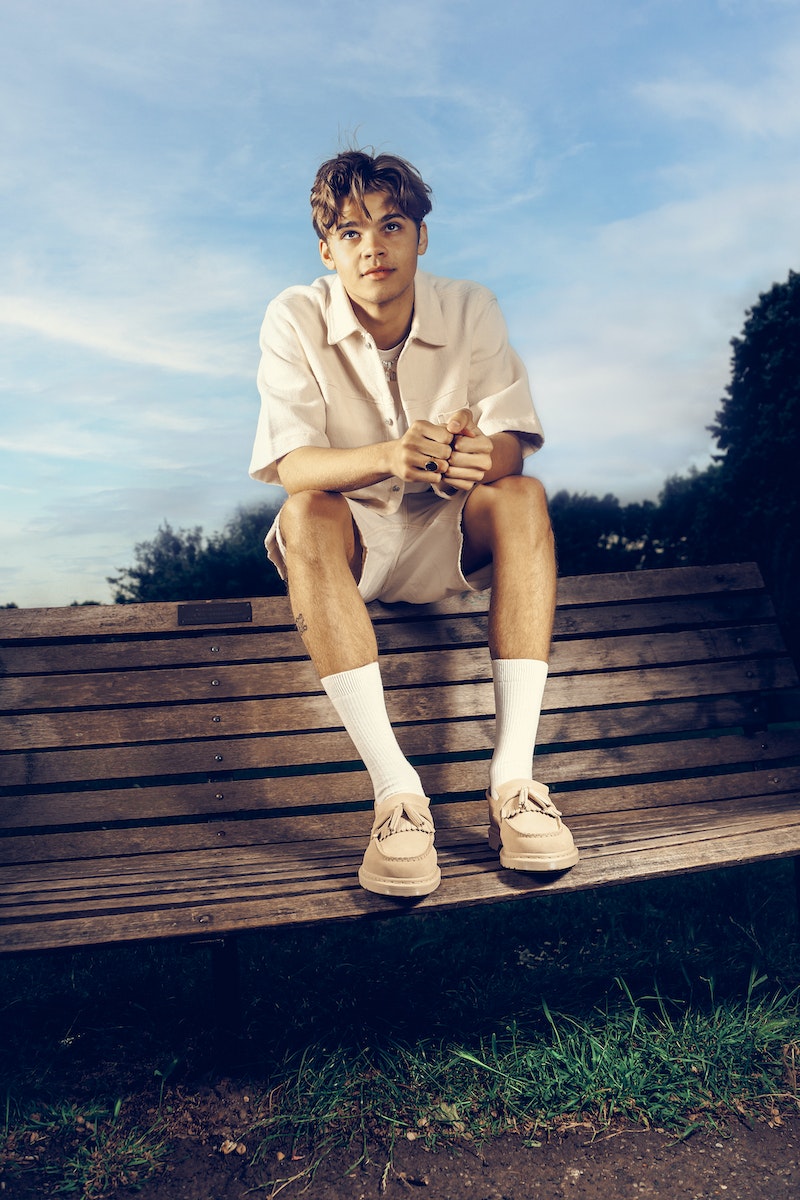 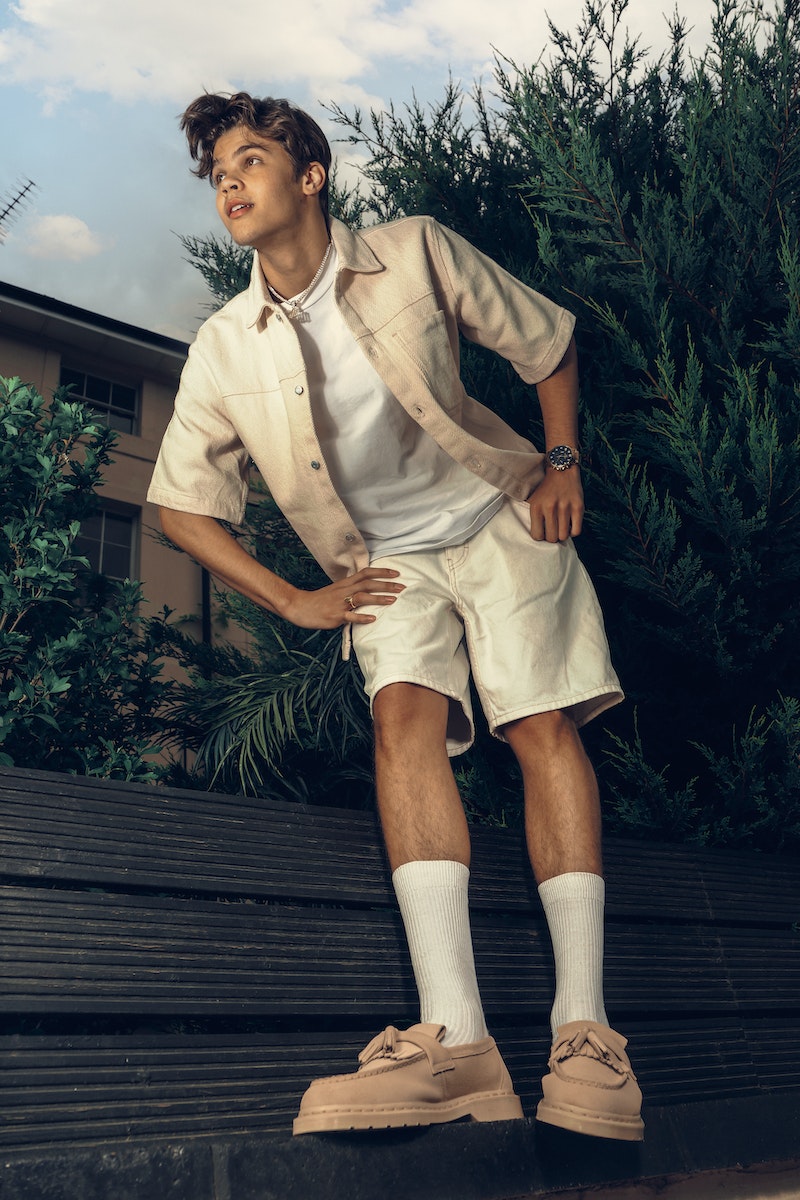 Where are we going to find you wearing your DMs this summer, and what will you be up to?
Realistically, my Dr. Martens could end up anywhere. I don’t really plan what I wear it just depends how I feel on the day. It could be in the cinema, on the train, in the Uber, in my boys’ yard, the studio, my Grandma’s house.
How does summer affect your creative work?
Summer affects my videography in a really uplifting way. The sun is the best kind of light you can get, init. Especially as I work on old school cameras like VHS and analogue sometimes and point-and-shoot in film. It’s the best time to get the most content out, especially working with the camera crew on set, the energy is way better than the average grey day in London.
What’s your secret to capturing summer memories?
As a filmmaker I bring my camera around with me all the time — it’s in-the-moment shots for me…to capture stuff you want to see when you’re older and want to watch yourself as a younger person. It’s very important to capture the best moments when it’s wholesome and organic.
What helps you smash through a creative block?
I always figure out how it could be worse at that moment and remember that everything’s going to be OK. We all have our ups and downs and you’ve got to just keep pushing that boulder up the hill otherwise if you give up you’re going to have to go all the way down again and roll it back up. I always realise that you have peers around you that can give you advice and assistance here and there. Always stick to that goal and how you can advance through.
When was the last time you stayed up until sunrise? What were you doing?
It was actually a couple of weeks ago, my first time in Manchester. That was wild – shout out to my guys Fire, Rellz and TJ – we went there to see 50 Cent at Parklife. It was a last minute ting, we went to some motive after and bumped into one of our guys, shout out Dillon, and we were up pretty much until sunrise. It was a long night but it was sick to bump into one of our guys. It was an eventful one.
Where do you see your work in five summers’ time?
In five summers’ time I expect to have work in my own cinema by then. My first ever job in summer holidays after GCSEs was working in a cinema, so I’ve always had that goal of wanting my own cinema and that’s where I got my film club idea from. It will happen, I’m telling you that now! 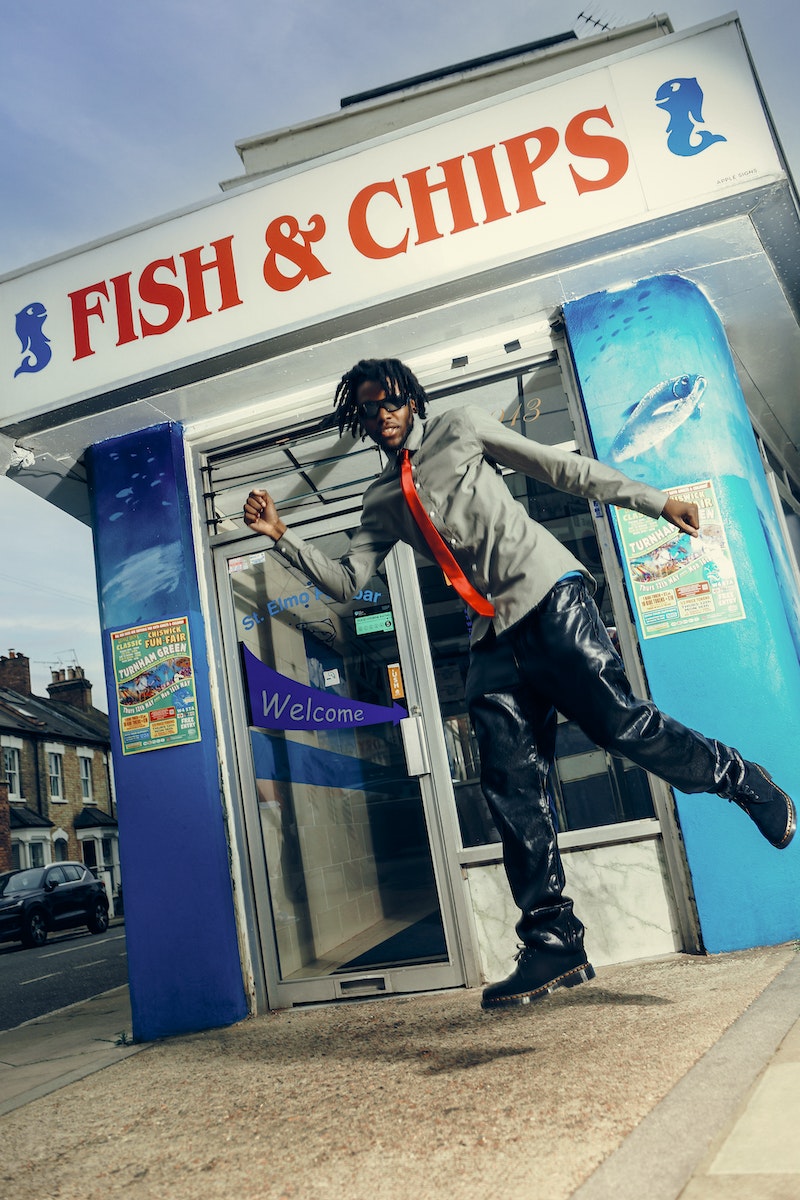 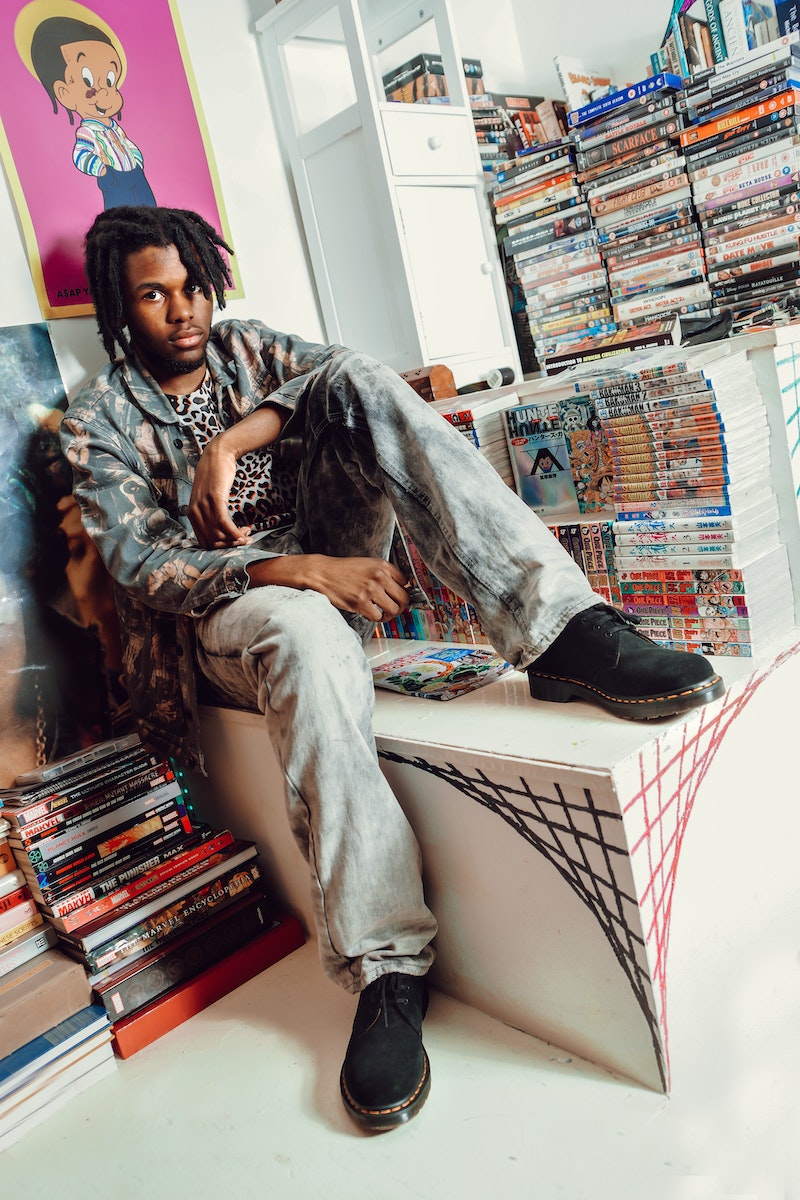 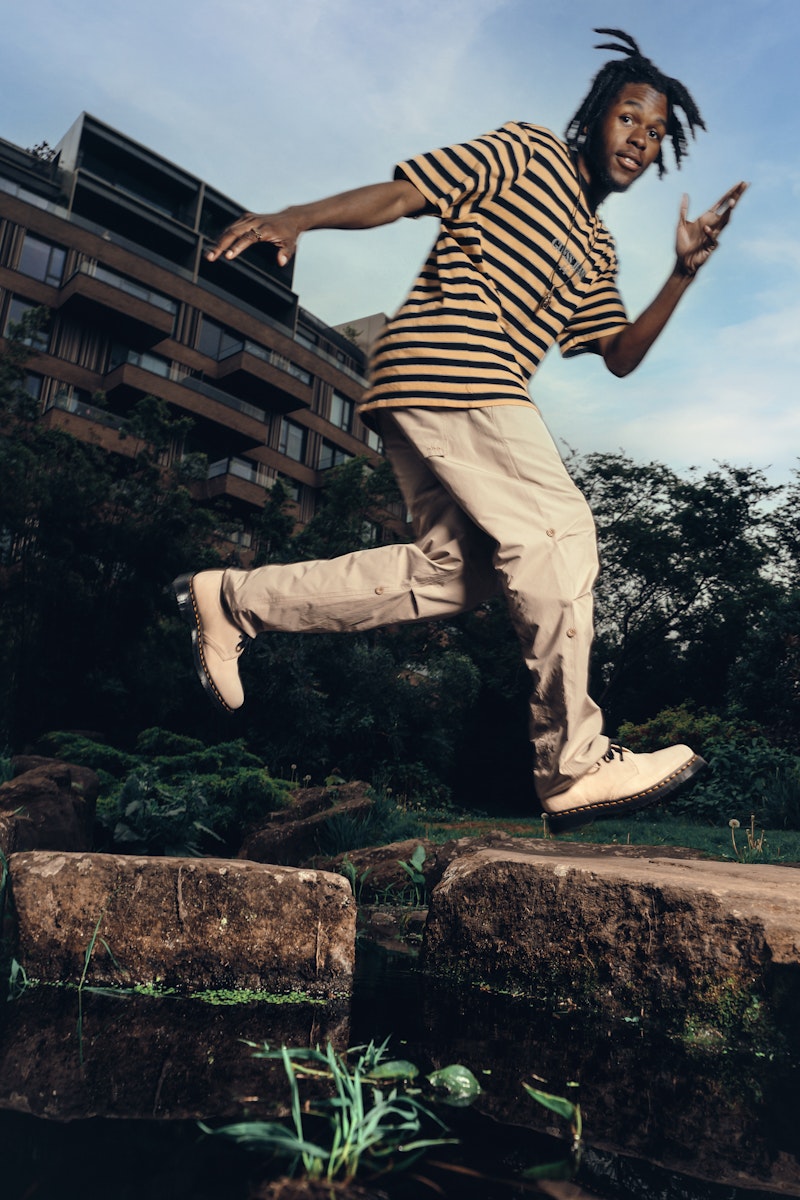 South London rapper and producer Ayrtn’s been on a vertiginous rise up the ranks over the last few years thanks to his idiosyncratic flow, atmospheric beats and a sound impossible to shoehorn. Ayrtn wears the 1461 Iced Suede Shoes and the 1461 Suede Shoes.

Where are we going to find you wearing your DMs this summer, and what will you be up to?
I’ll wear Docs at any possible time given. I’ll wear them on walks, studio sessions, festivals and parties. They’re fit for multiple occasions.
How does summer affect your creative work?
The good weather brings out the best in people. Every one is on a good vibration and it’s effortless for it to inspire the content of my music.
What helps you smash through a creative block?
Anything that’s new assists me on coming out of a creative block. Travelling is important, and so is learning a new language.
When was the last time you stayed up until sunrise? What were you doing?
The last was about one week ago actually. I was getting creative in the studio with my friends in Paris. 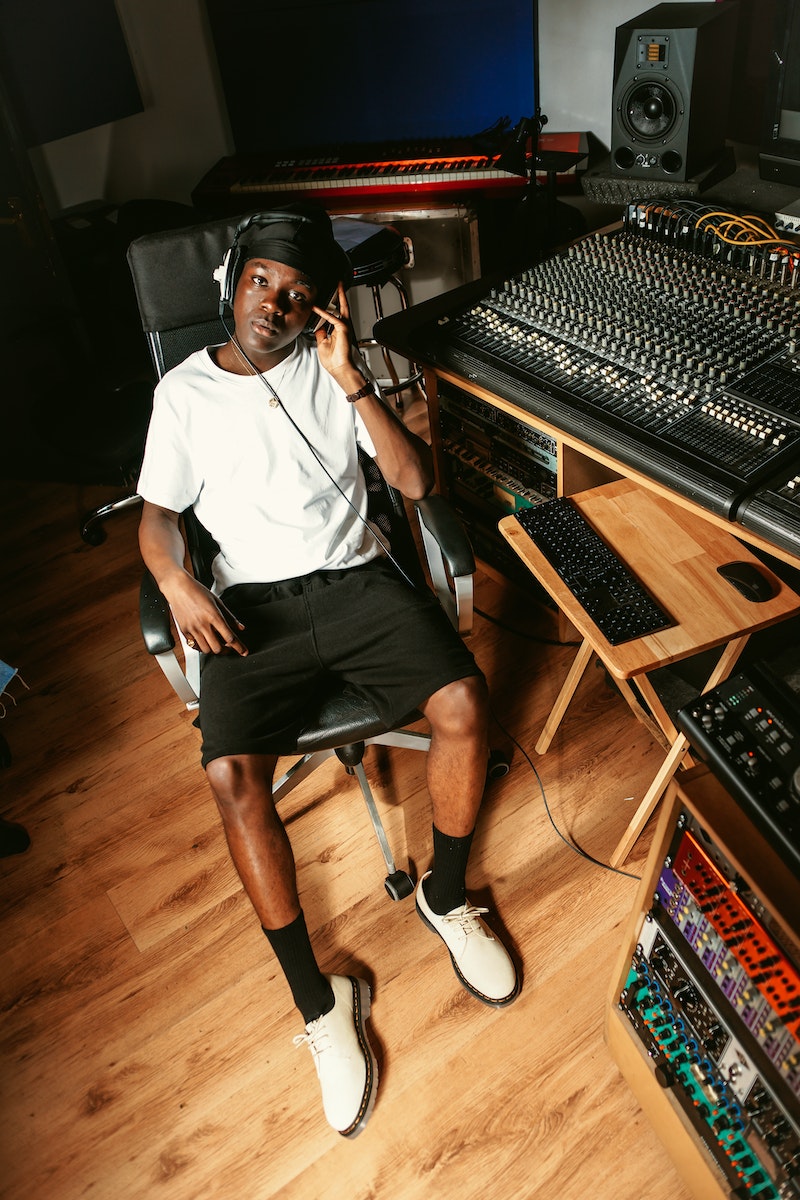 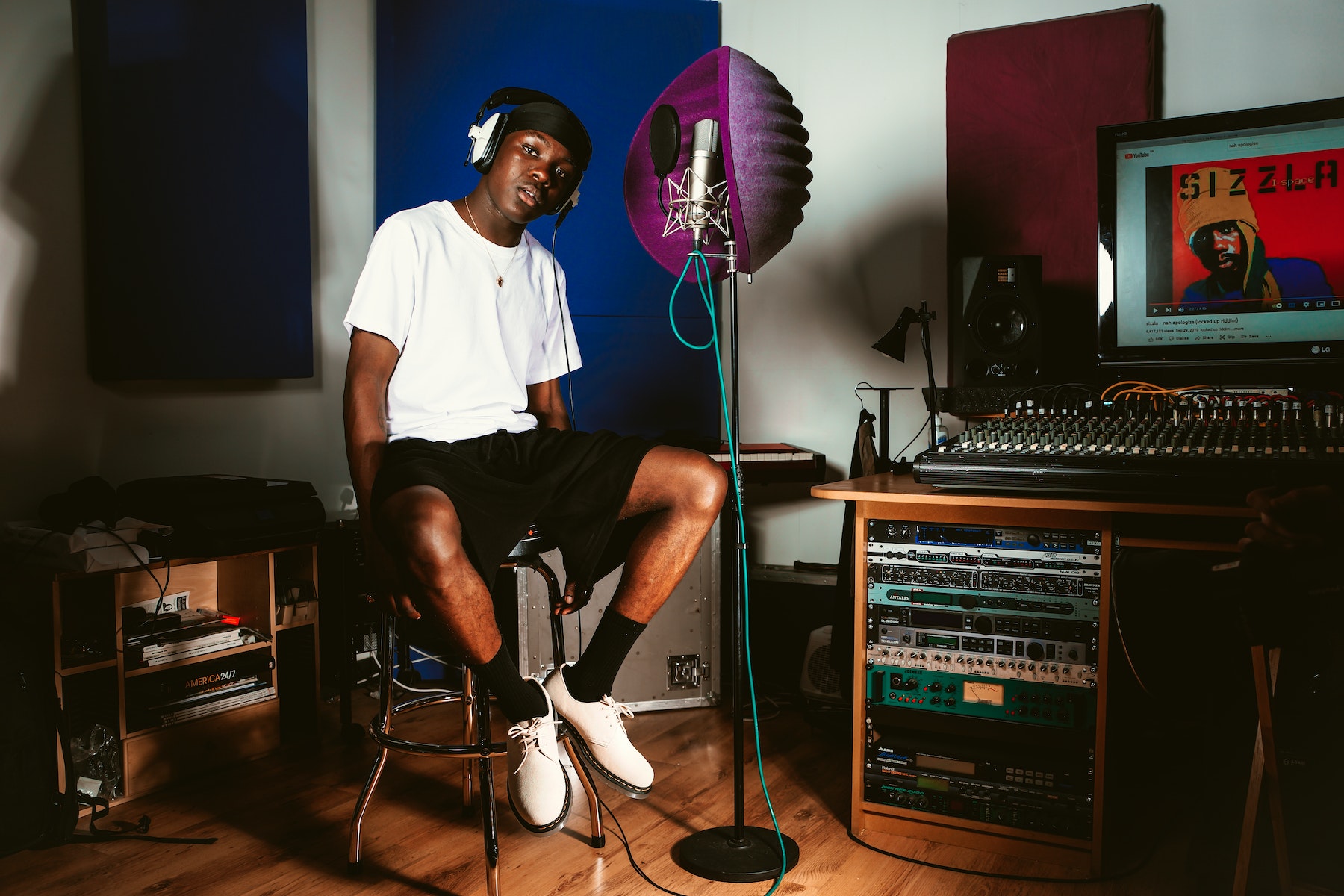 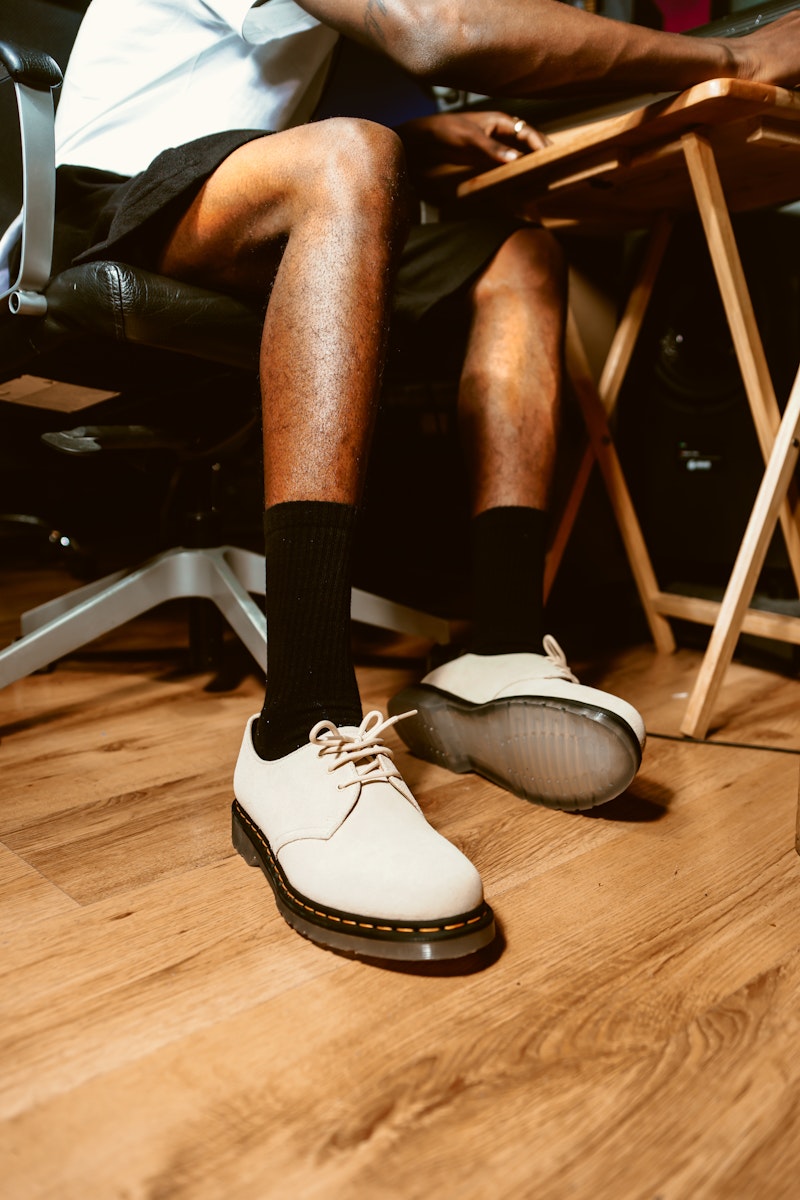