Luke Derrick doesn’t really remember when he first wanted to be a designer.

There’s no sentimental story of him flicking through fashion mags in WH Smiths aged 12, or stealing clothes from his older brother. And there was definitely no desire to stand out. Coming from a quiet, conservative area of quiet, conservative Oxford, Derrick was a shy mummy’s boy.

​“I grew up around a lot of stuffy male spaces, with me being quite sensitive,” the 26-year-old says. ​“My way in was actually sport. I was an athlete as a teenager and I started designing kits for my team.”

After coming up with the kit for his rowing team, Derrick got a knack for sportswear and started an internship at cycling apparel company Rapha at 16, just before leaving school. ​“I realised you could do a sketch, send it off and it could be turned into a garment.”

Then, surfing the Great Wavey Garms re-selling explosion of 2014, Derrick started buying all sorts of ​’90s clobber and, for the first time, saw the potential in clothes. 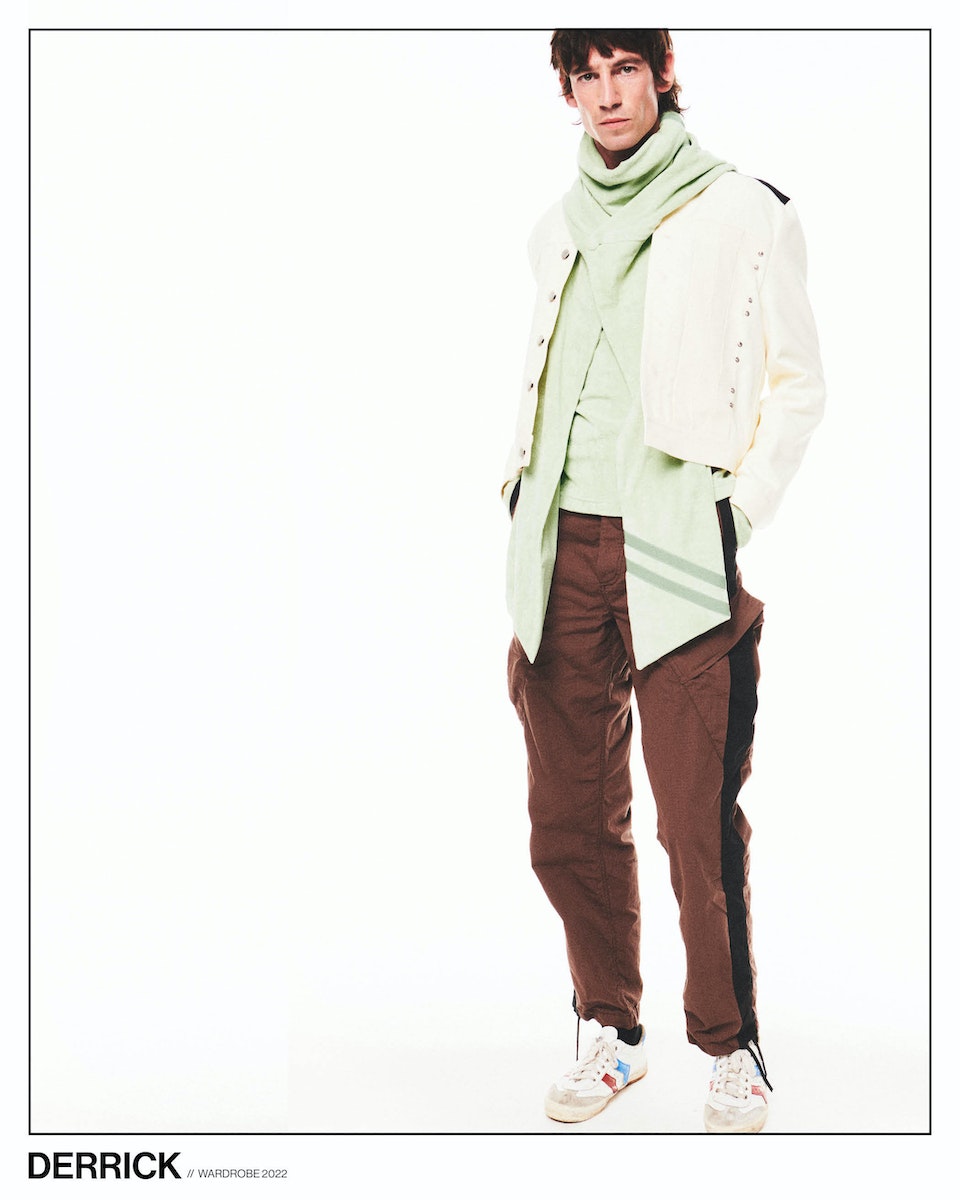 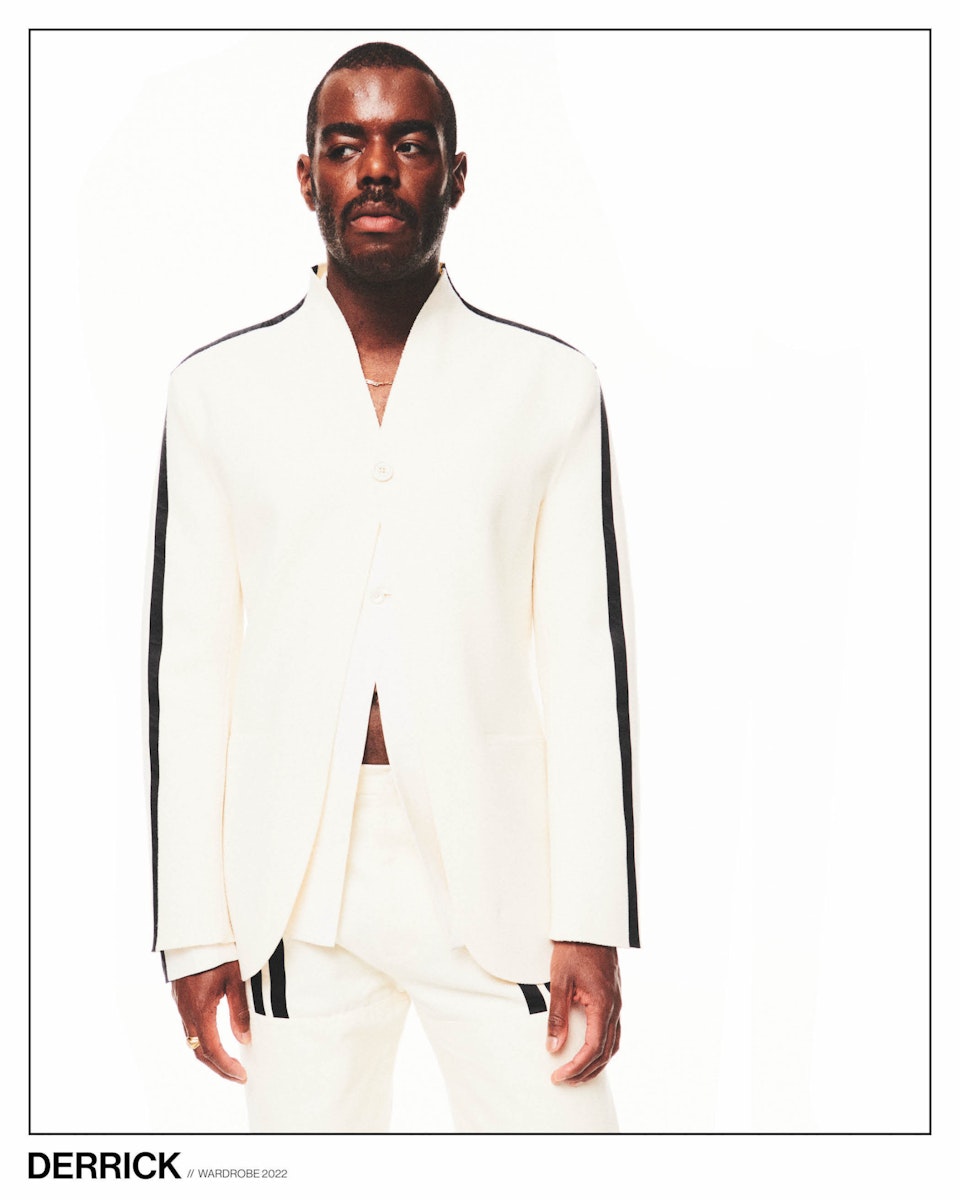 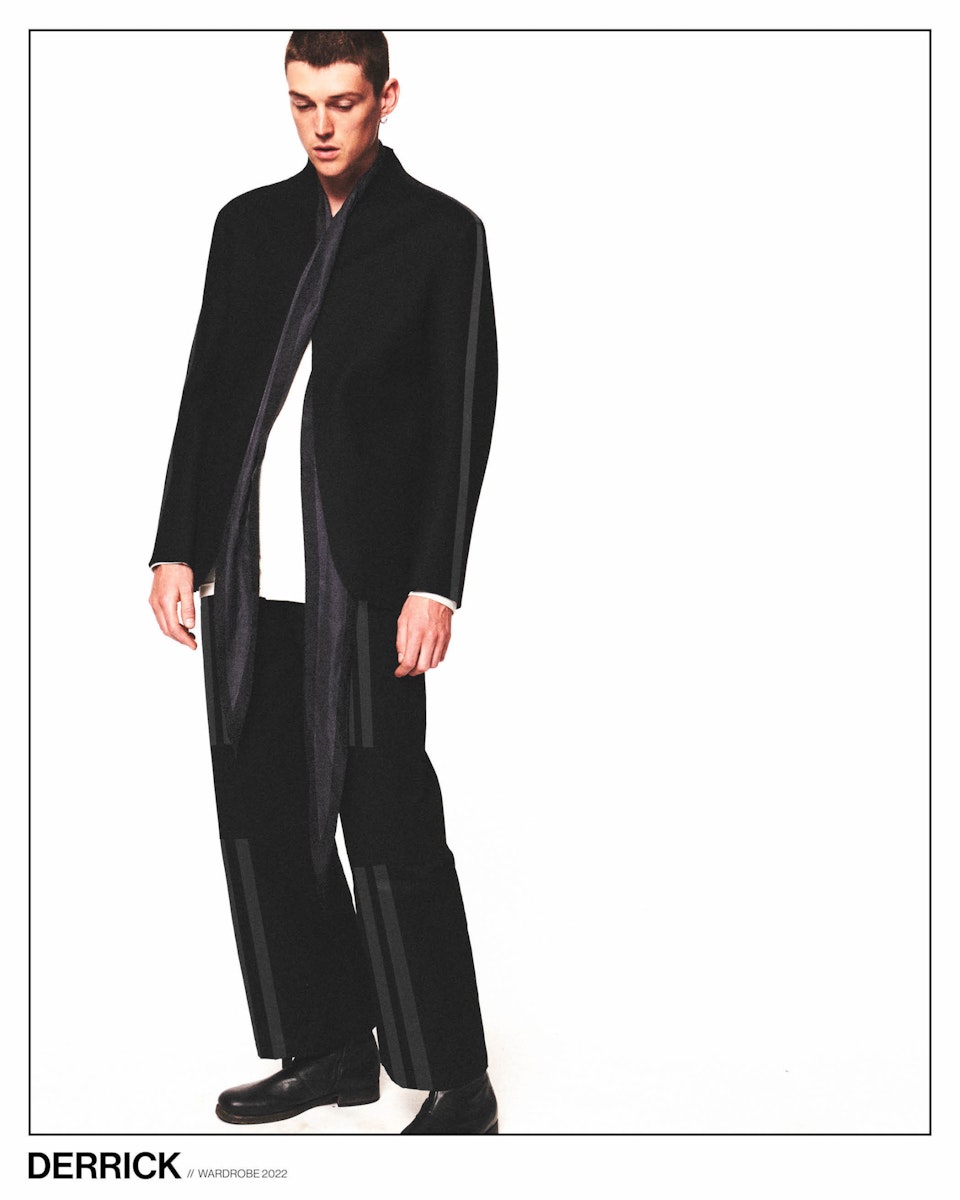 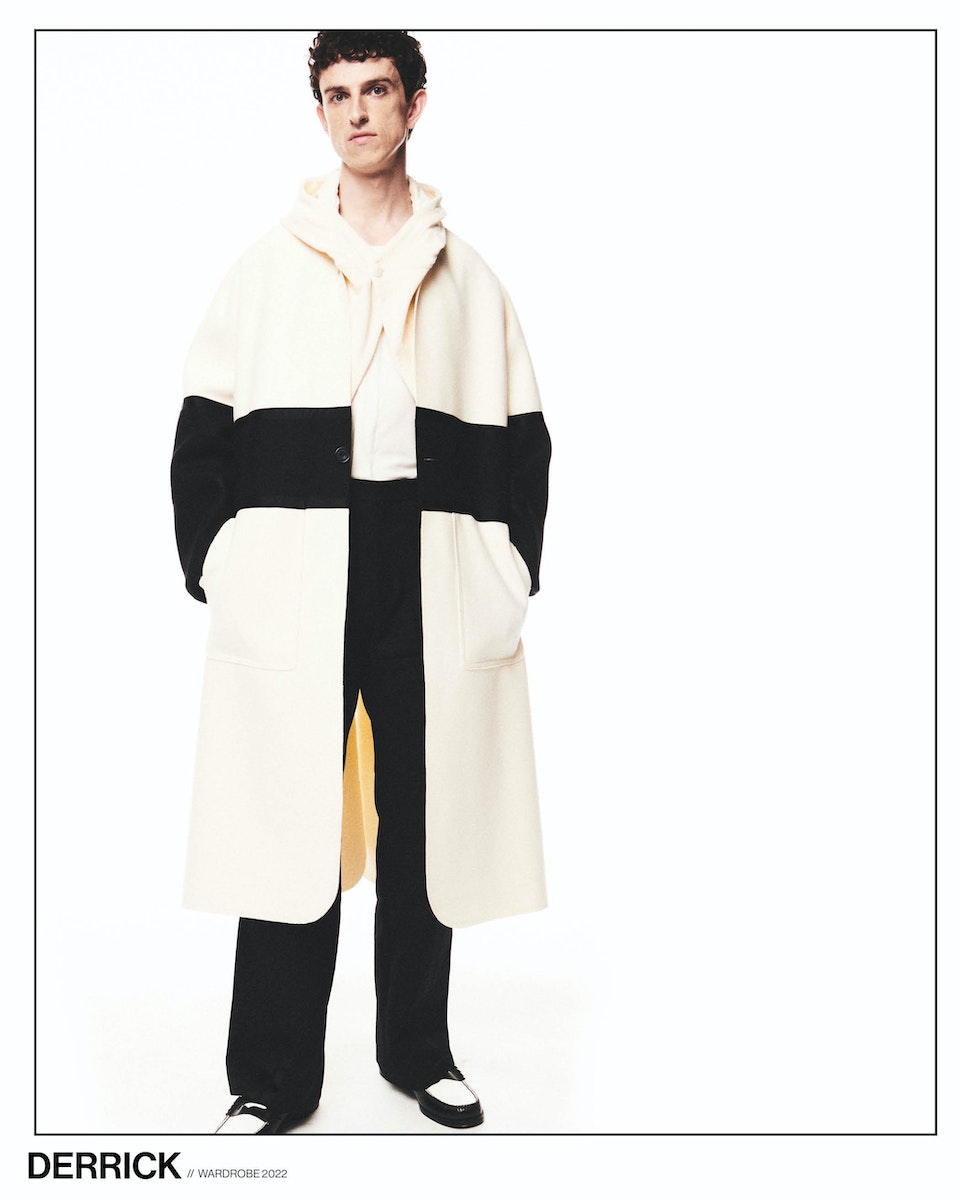 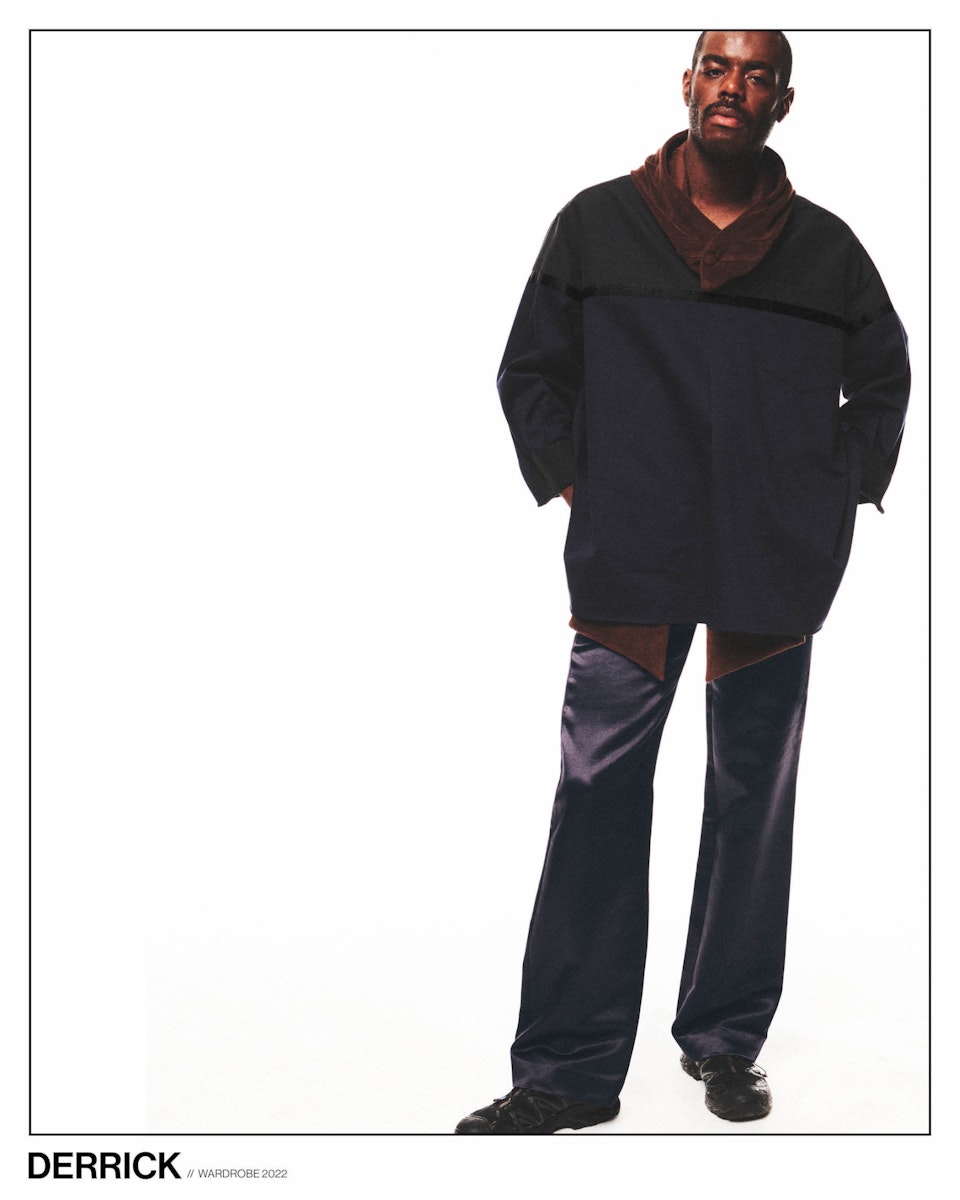 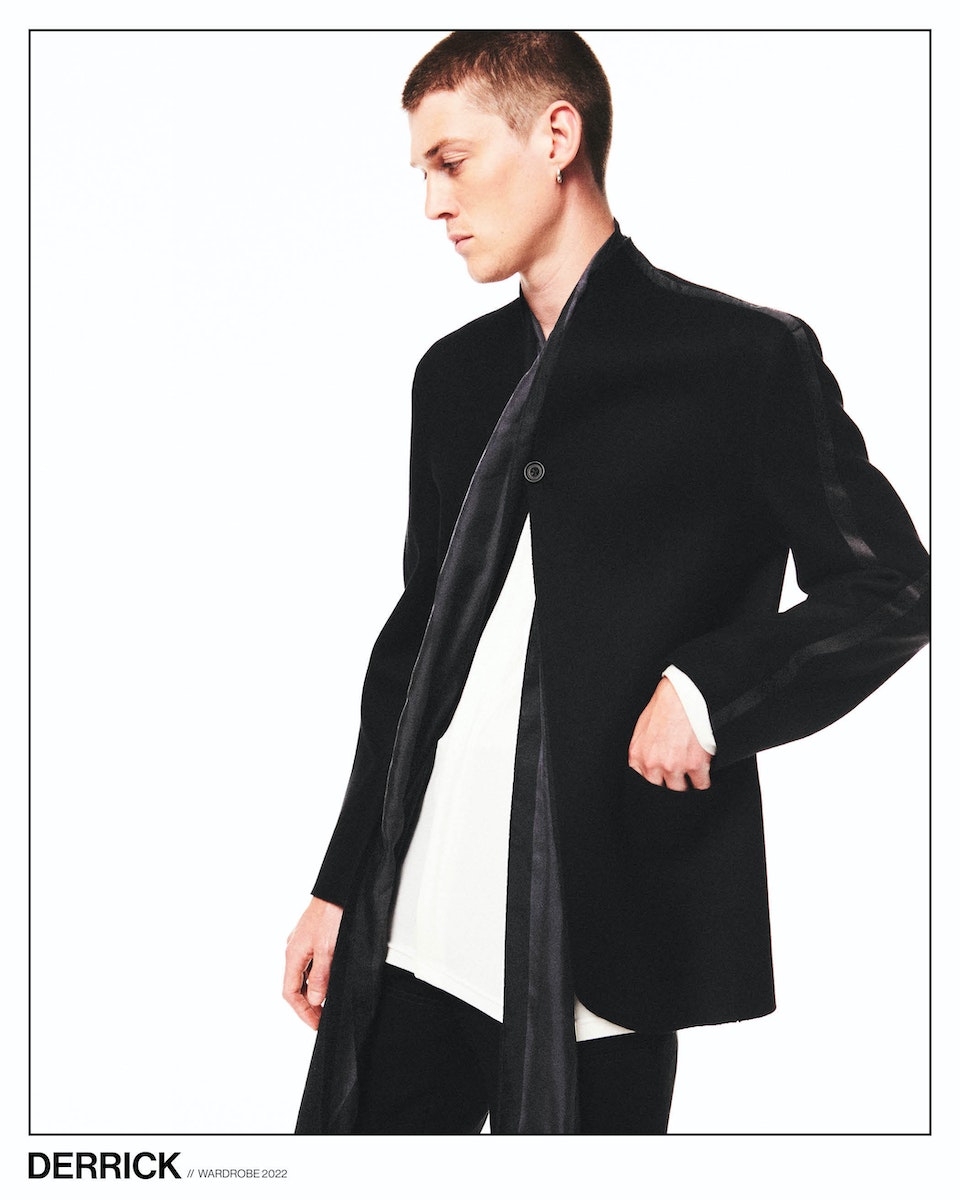 “As a kid, I would hide behind my school uniform, was afraid to have a haircut… Then I started buying all this cheap, horrible stuff and throwing it together.” He remembers being shocked when, dressed in his new (but old) clobber, no one batted an eyelid. ​“It was this whole idea of creating your own personality. I thought that was empowering.”

From there, he started getting into classic menswear like Savile Row tailoring and Alexander McQueen (at both of which he’d later intern). Then, he put a portfolio together, sang a little prayer and got into Central Saint Martins’ BA Fashion course.

That’s when Derrick started questioning his past.

“I did cadets and rowing, for fuck’s sake!” he exclaims, comparing his old extracurriculars to Saint Martins’ subversive design past. ​“It was all privileged crap. At CSM, I had to go away and think about all that stuff, and I realised as much as it was incredibly toxic and horrible, there was something in me that had to analyse all of it.”

For his BA final collection, he looked at male archetypes and classic menswear pieces – a guy in a white shirt, a banker in a suit, a ​“going out” jacket – finding an endearing simplicity in the function-first mentality. ​“Everything has a very bloke logic, doesn’t it? Bloke justifications and bloke idiosyncrasies – it’s endlessly amusing to invert and play with that, and it massively informs everything I do.”

Stepping up to CSM’s MA course a year later, Derrick’s second final collection was born out of lockdown monotony. The bed-desk-TV-bed routine made him analyse the purpose of clothes, especially when 90 per cent of the stuff we owned was left collecting dust in our wardrobes. And so he saw his collection as an interchangeable rail of clothes for the ​“urban guy”.

“Who is that ​‘urban guy’ today? Maybe he’s creative, probably likes Tarantino… It’s about creating clothes that blur across those different expectations of dress codes,” Derrick says. ​“You could wear something that you would want to loaf around in, not have time to change, but go out in it anyway. ​‘Getting away with it’ dressing is what I’m enjoying exploring with my stuff at the moment.”

What’s your motto in life?
Whatever it is, take it to its conclusion.

Who would you most like to see wear your clothes?
Stefano Pilati, definitely.

What do you reckon you’d be doing if you weren’t a designer?
I think I’d still be a failed athlete.

What’s the last film you saw?
Everything Everywhere All At Once. Go and see that if you haven’t. It’s so good.

What gets you out of bed in the morning?
I think what is hopefully evident in the clothes is that I’m really not a morning person.

What do you listen to most in the studio?
Anything that is repetitive, sort of hypnotic. A lot of Boards of Canada, Orchestra Baobab, Burial, Keith Jarrett.

Where is the best city to let your hair down?
Well, I shaved my head in London and that was fun, but I grew it out in Rome. So let’s go with Rome.