Not that it’s immediately apparent to the casual, non-maggot observer, but masked rockers Slipknot have worked their way through 16 members since their mid-nineties formation in Des Moines, Iowa. That’s 10 more than the six members who cycled through girl trio Sugababes, and six less than Black Sabbath’s 22 members.

Even given the fact that those masks mean that anybody could be under there, that’s some churn-rate.

But since 2013 percussionist and co-founder Clown – aka Shawn Michael Crahan, aka #6 – has been the last remaining original member. And the oldest. And, it turns out, the most fashion.

Twenty-one years on from the release of his band’s eponymous debut album, the 50-year-old has just checked into a hotel in Copenhagen, fresh(ish) from last night’s show in Dortmund. Entering their third decade, the reliably boilersuited Slipknot are still a major concert draw across Europe and the US, with this latest tour running to 19 dates so far.

After our interview live music, like everything else, grinds to a halt as coronavirus brings the shutters down on mass gatherings. Which, in Slipknot’s case, means their adoring fans, the ​“maggots”, equal a moshing corona-cluster waiting to happen.

But when we speak, it’s as if Crahan can sense the coming storm.

“I tell people in this business, you have to be a pirate,” he says down the phone in an instructive, TED Talk tone. ​“You’ve got to be willing to be on the move all the time. You have to consider the things that you absolutely have to do in order to survive.”

For a man whose alter-ego is a nightmarish clown, his survival check-list is a lot less rock’n’roll than one might imagine:

See what we mean about his powers of prediction? 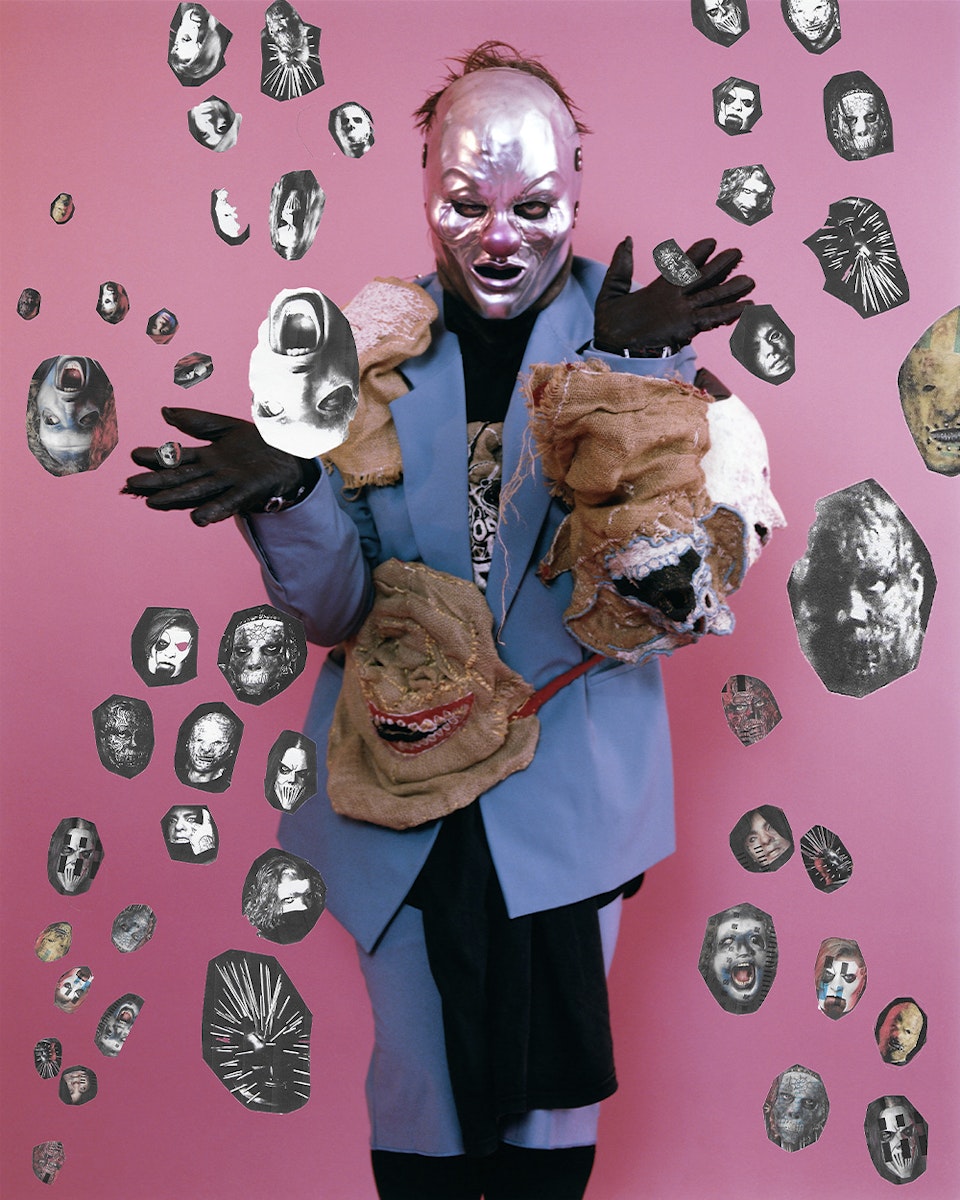 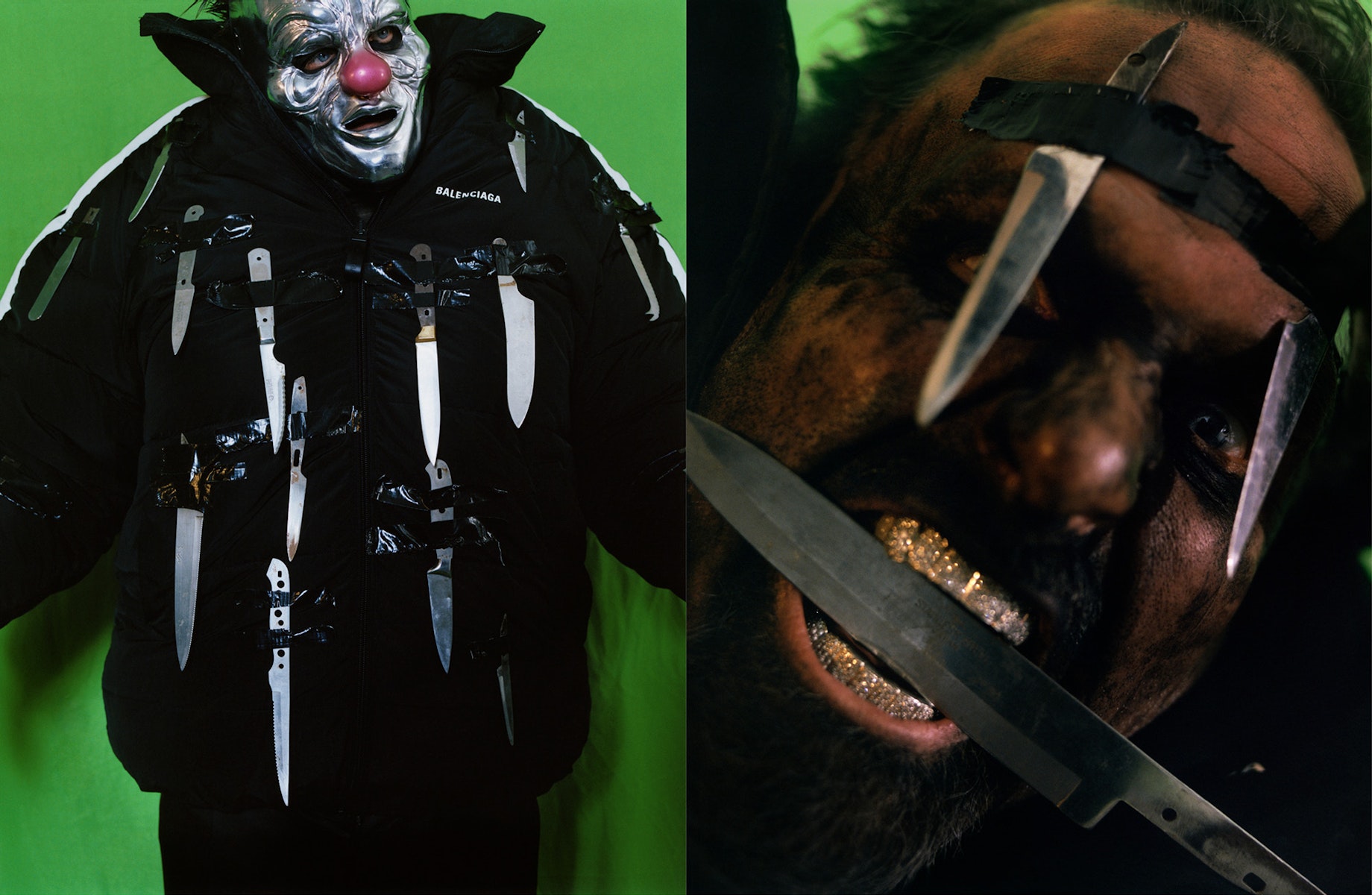 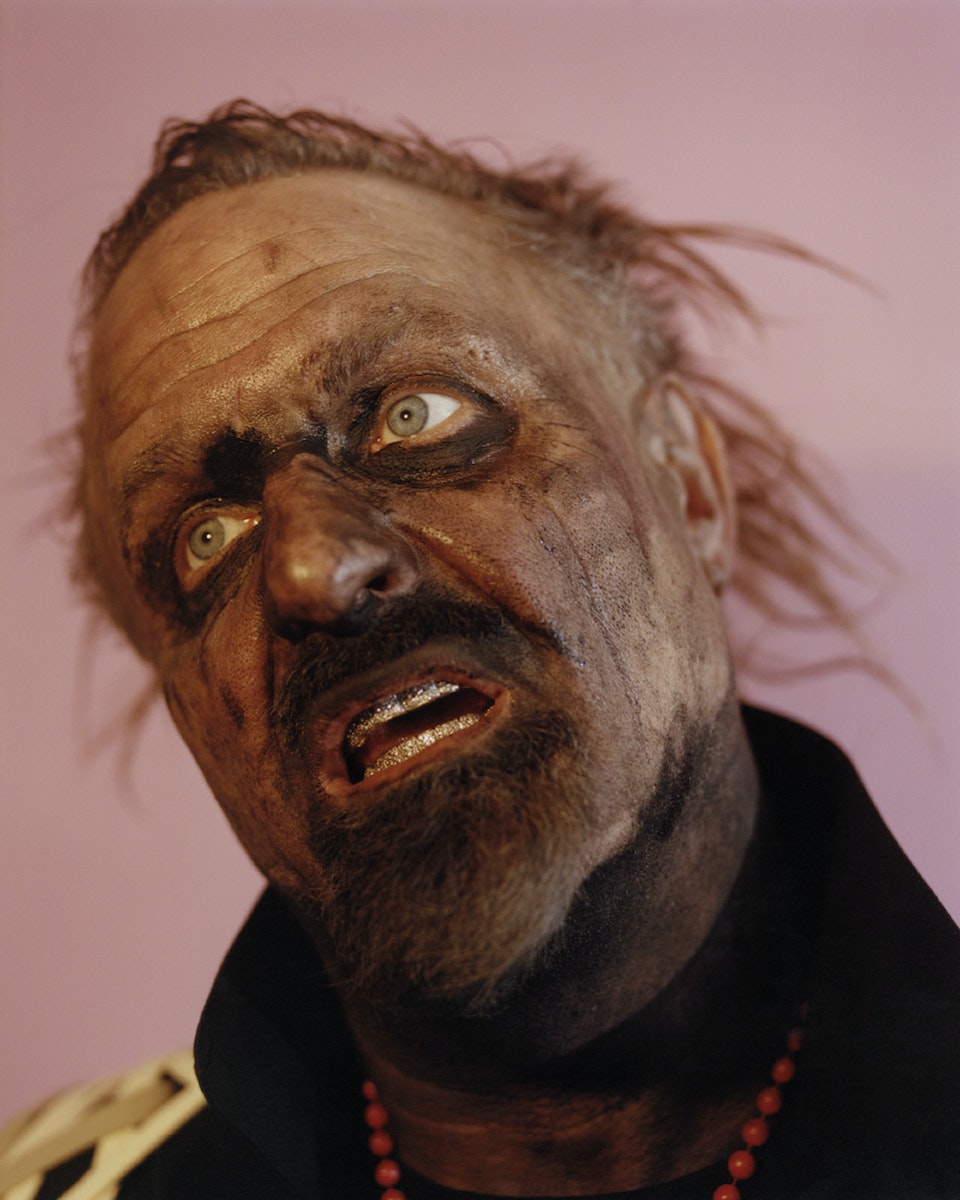 Along with Slipknot bassist Paul Gray (#2) – who died in 2010, aged 38, from a morphine overdose – Crahan formed metal band The Pale Ones in 1995. He brought in Joey Jordison (#1) as the band’s drummer while Crahan focused on percussion. Donnie Steele (he didn’t have a #number) was on guitar and Anders Colsefni (#ditto) on vocals. A year later, Jordison suggested the band change their name to Slipknot after the fivesome wrote Slipknot, the opening track on their first official demo, Mate. Feed. Kill. Repeat.

During the demo’s mixing process, Steele left the band for religious reasons, and was replaced by keyboardist and sampler-wrangler Craig Jones (#5). In 1997, Colsefni was replaced as lead singer by Corey Taylor (#8). Both Jones and Taylor, along with Crahan, remain in the current line-up. The rest, as they say, is hardcore.

Of course, with Slipknot, image is everything – they even look louder than any of their contemporaries. Their masks, integral to who they are (or aren’t) have, over the years, come in the form of gas masks, pig heads, a suitably pointy tribute to Hellraiser​’s Pinhead, zipped-up mouths, phallic noses, and a whole lot of bondage gear.

As with every album, the band’s masks were revamped for the release of their sixth LP, last year’s UK and US chart-topper We Are Not Your Kind. Crahan’s new face-covering is designed as a mirror with a slight reflection. The idea is to show his fans that they’re in it together.

“I figure this long into the game of rock‘n’roll, it’s really just about all of us,” he explains. ​“Besides, I’ve always been an advocate for change. I can’t be held to anything – I get too bored.”

Recently, Crahan has gone through another change. ​“I didn’t like who I was physically,” he begins. ​“So I worked really hard in the last five years to get to where I’ve always dreamt and it’s actually happening. l’m able to go to the places I’ve always wanted to.”

“Usually I’ll pull them up to my knees and tuck my pants in. A lot of the band members will give me a hard time – Corey tells me that I look like a baseball player, like Babe Ruth.” 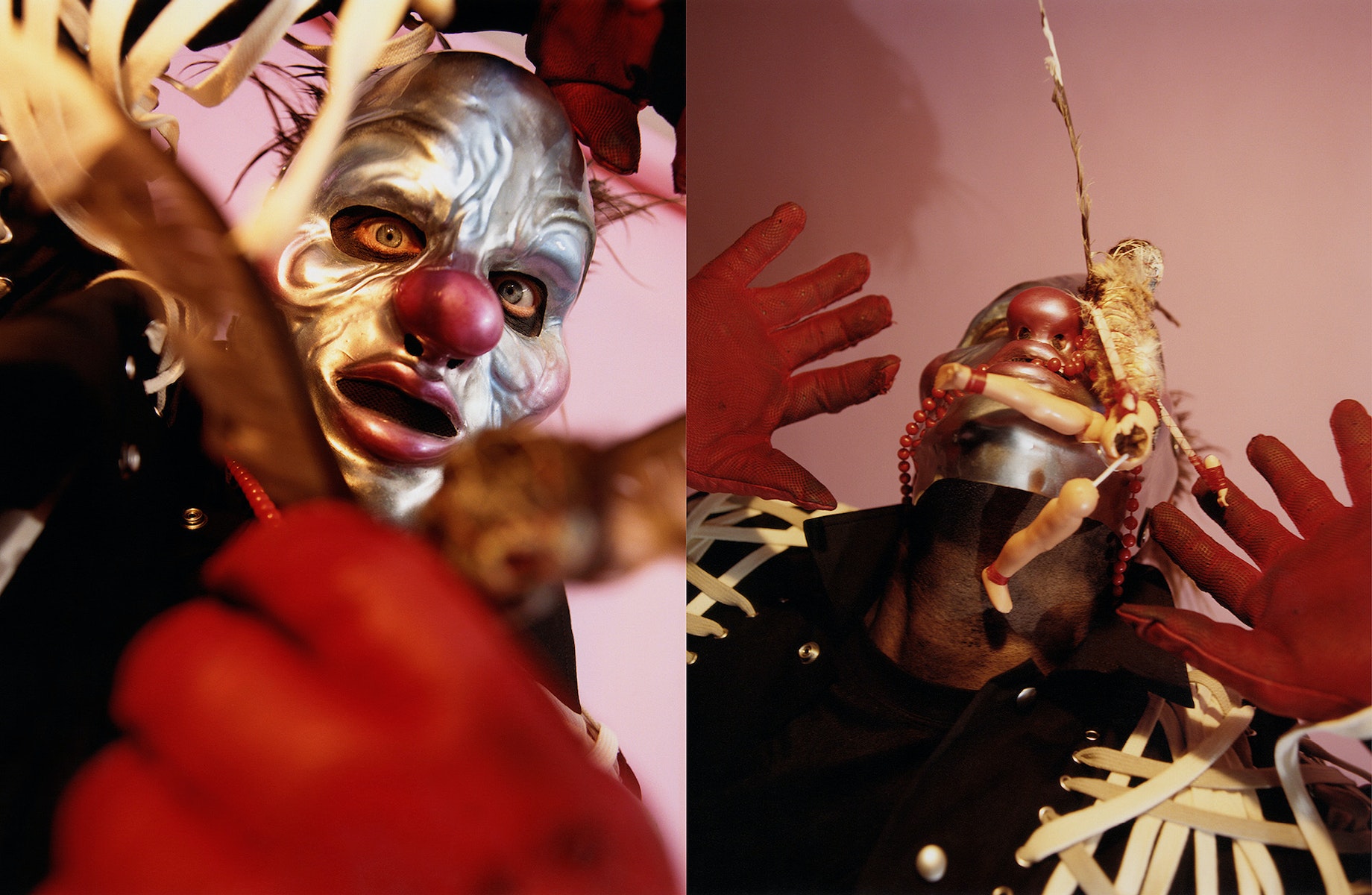 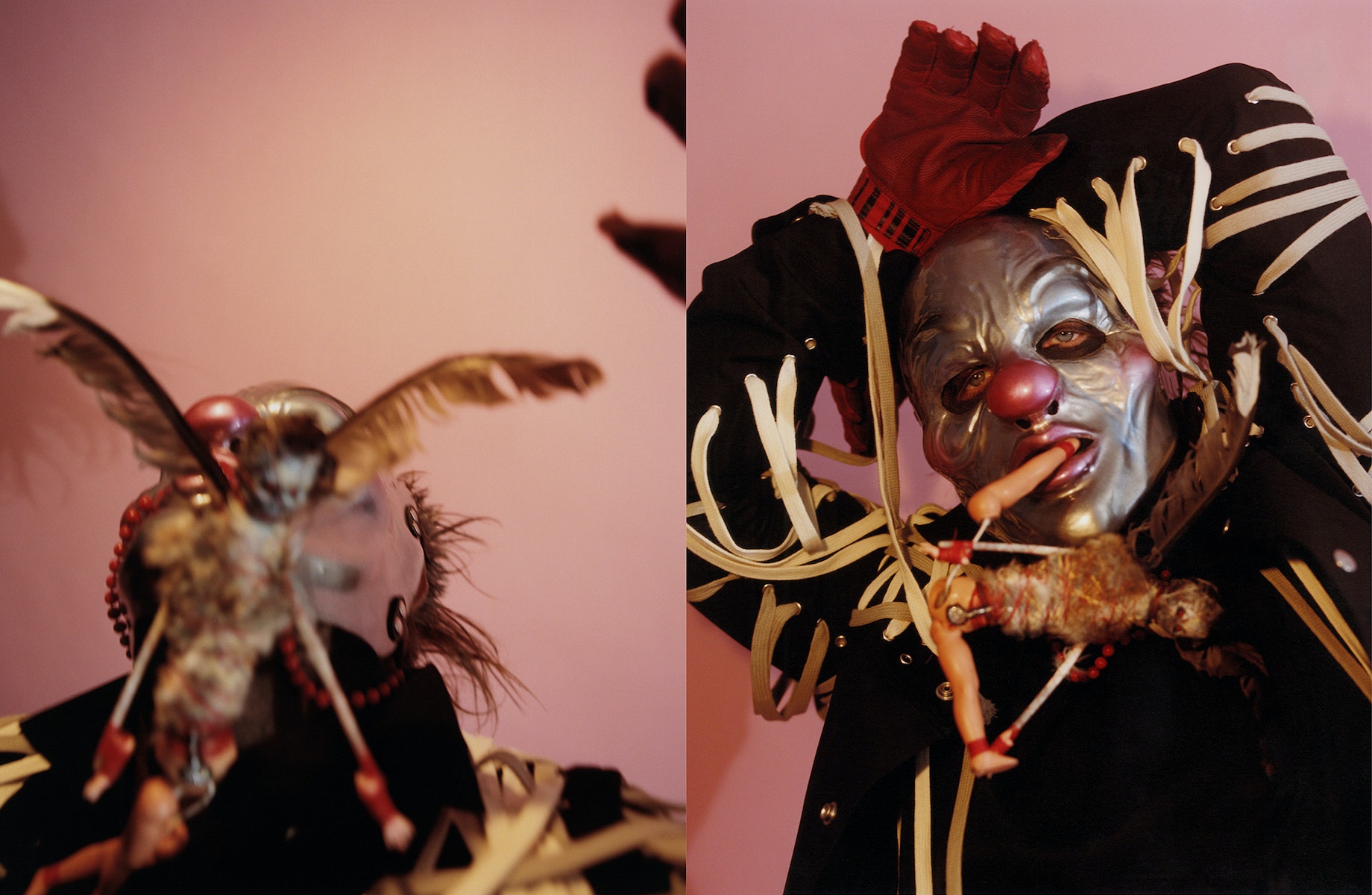 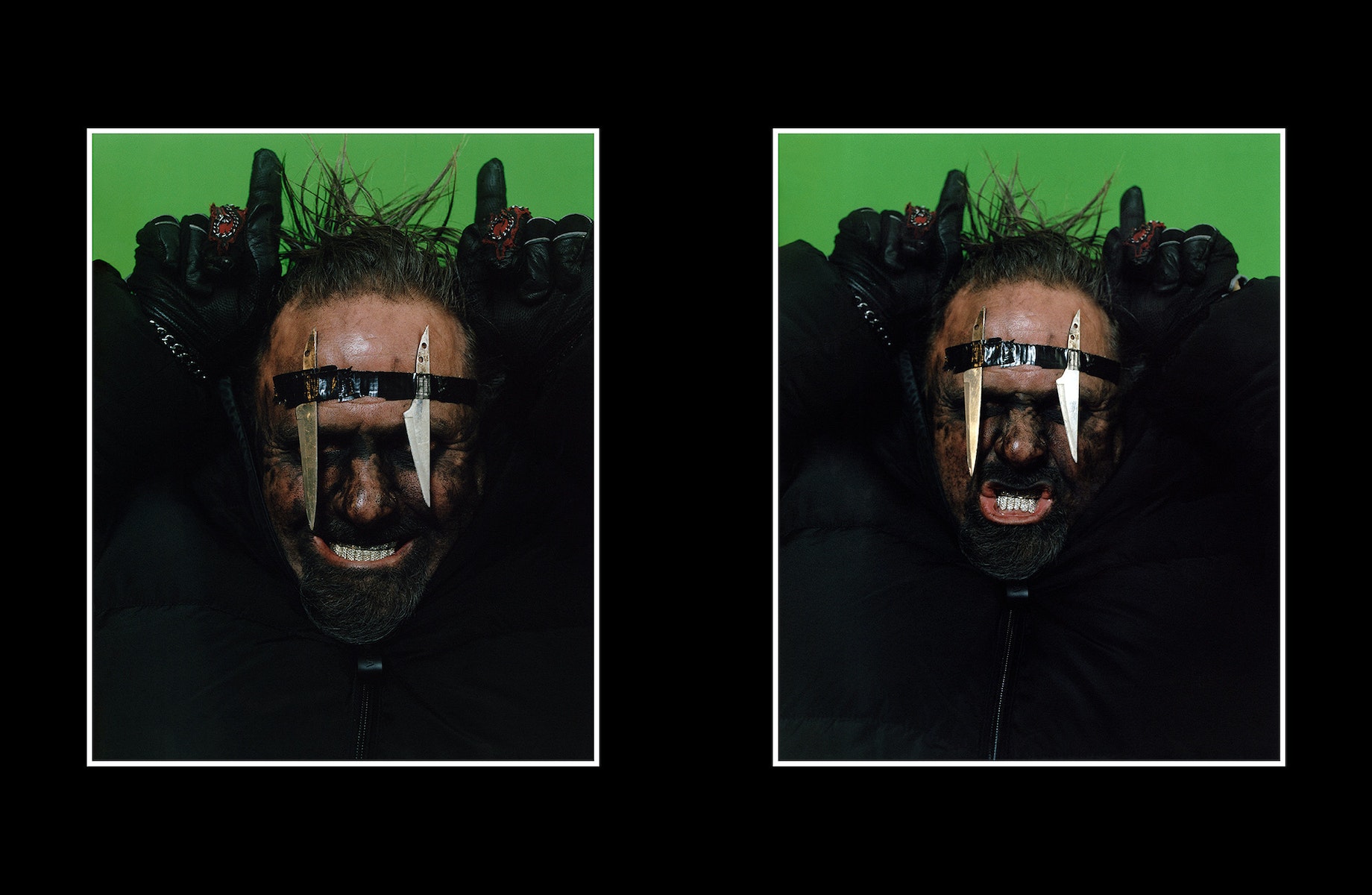 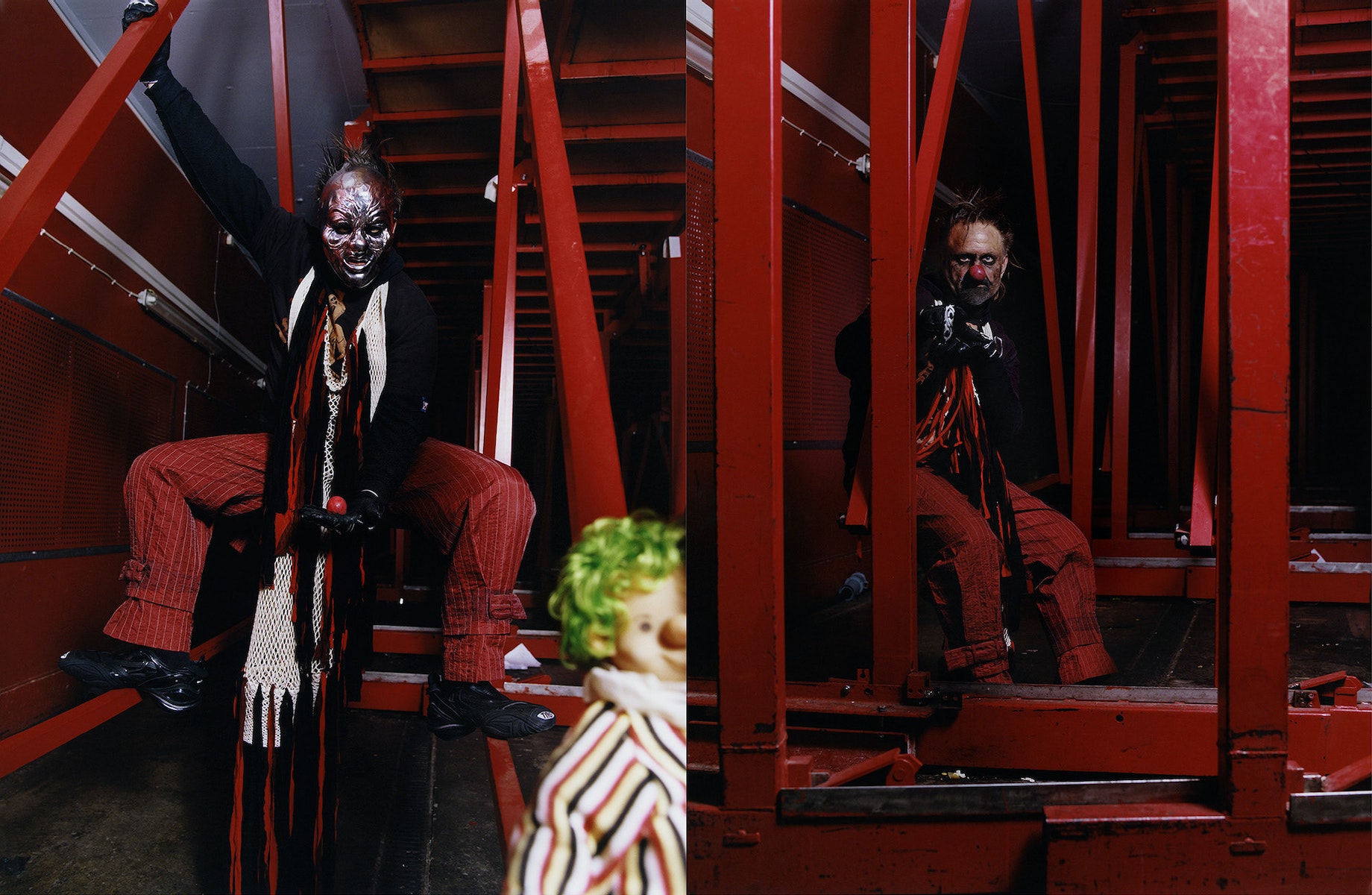 Growing up in Des Moines, in the heart of the midwest, young Shawn was into uniforms. He studied police outfits, dissecting the way they were stitched together. Likewise army generals tricked out in badges and medals, or the precision cut of a Marine Corps officer uniform.

Each morning he’d also watch his father dress up for a day in the office, donning an Italian-made shirt, three-piece suit, smart shoes and – the final, classy touch – his name stitched onto the inside of a suit jacket. Attending a Catholic private school for 12 years only fed Shawn’s passion. There was a strict dress code: smart shirts worn under sweaters with dress trousers and belts. Shawn was all-in.

“But after high school, I got really out of shape and it kept me away from the stuff I love,” he admits. And there was one fashion loss that he feels particularly painfully.

“Alexander McQueen was my gateway into fashion,” he says, his obsession audible down the phone line. ​“What I do and the energy I bring to Slipknot is very similar to what he did,” Crahan continues, referring to the brilliance of the fashion world’s own rock star at staging runway shows that were performances in themselves.

A good student of McQueen’s Joan of Arc-inspired AW98 show, 2001’s What a Merry-Go Round (a fairground full of nightmarish masks, including clowns) and 2009’s Horn of Plenty (models in slashes of red and black walking around what looked like the contents of a skip), Crahan appreciates the showmanship-with-intelligence at the heart of those fashion extravaganzas.

“I understand those shows and the risks he took – it felt perfectly natural when I stumbled across it. It really made me feel like I belong.”

Now, finally, at the age of 50, he’s using this interview to go public with private passions that might seem at odds with a day job in one of rock’s loudest, rawest bands. He reads Vogue and eagerly picks up Architectural Digest whenever in the doctor’s waiting room. He listens to Depeche Mode and always makes a beeline for Fendi when he’s in Italy.

“I’ve started coming out of my shell,” he acknowledges, cheerfully. ​“This may sound arrogant but at this point, Clown is iconic. It’s never been about my face – it’s always been about this person. But now he’s at the top of his game and worked so hard to get on with life.” 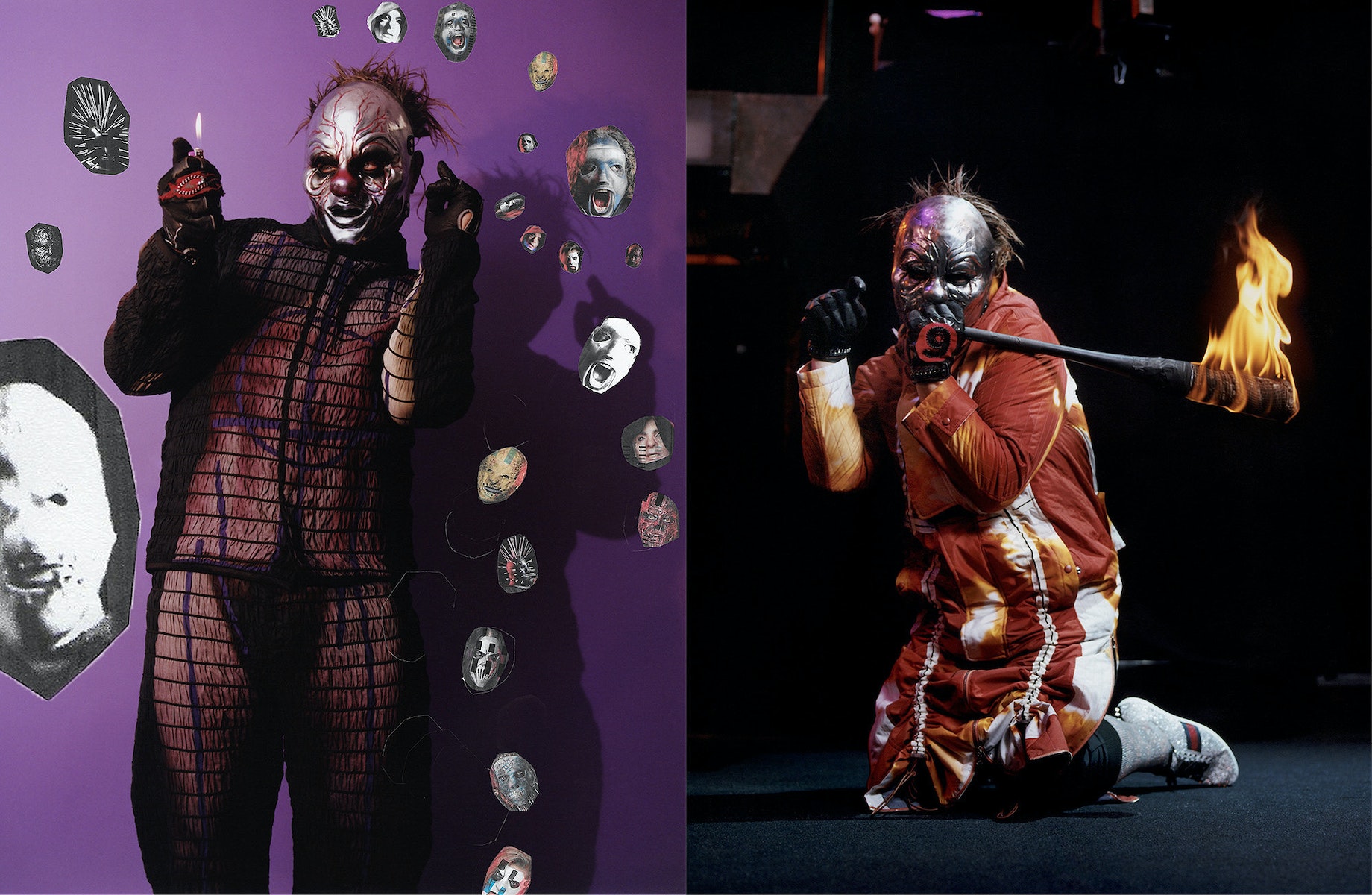 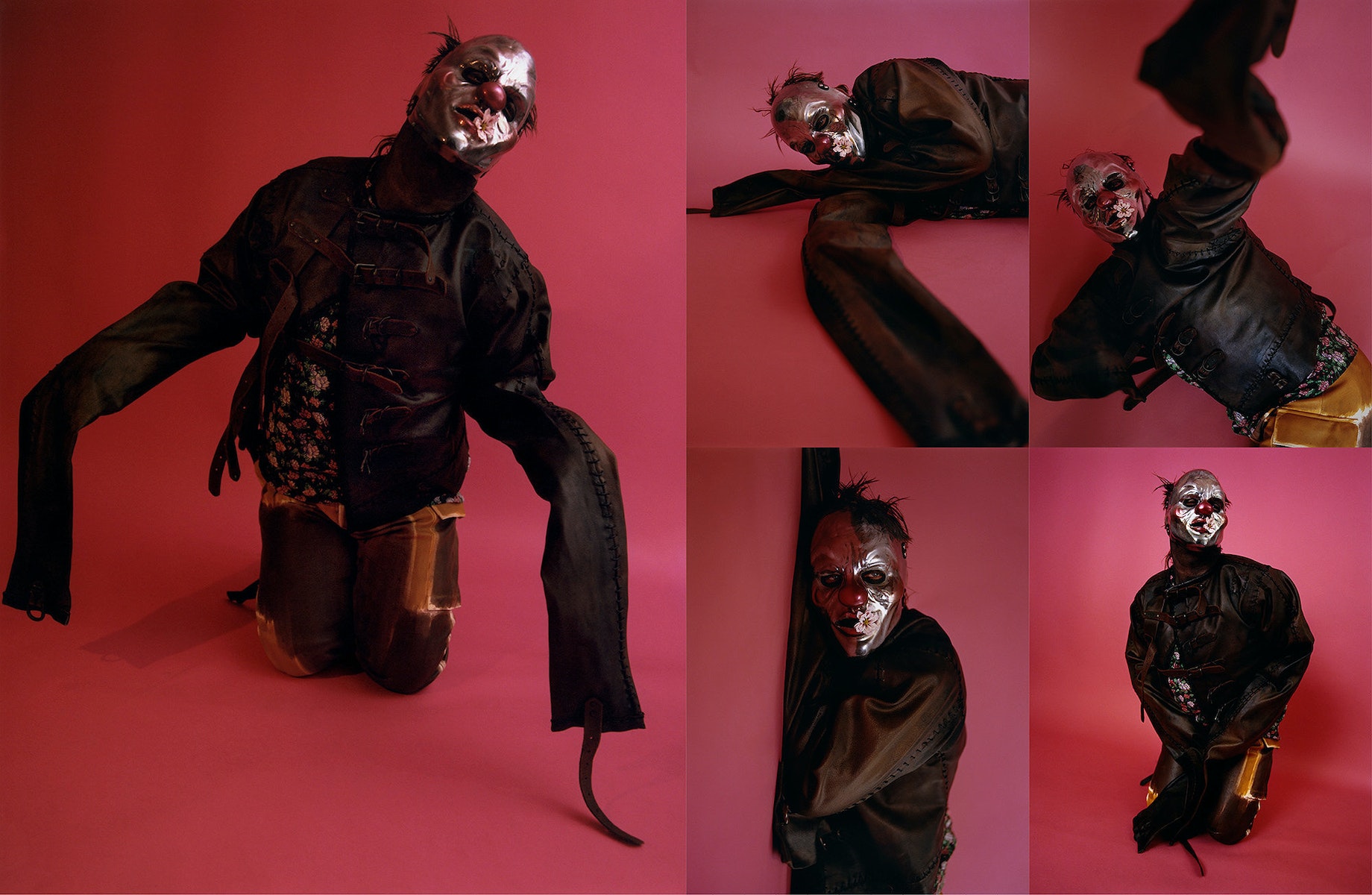 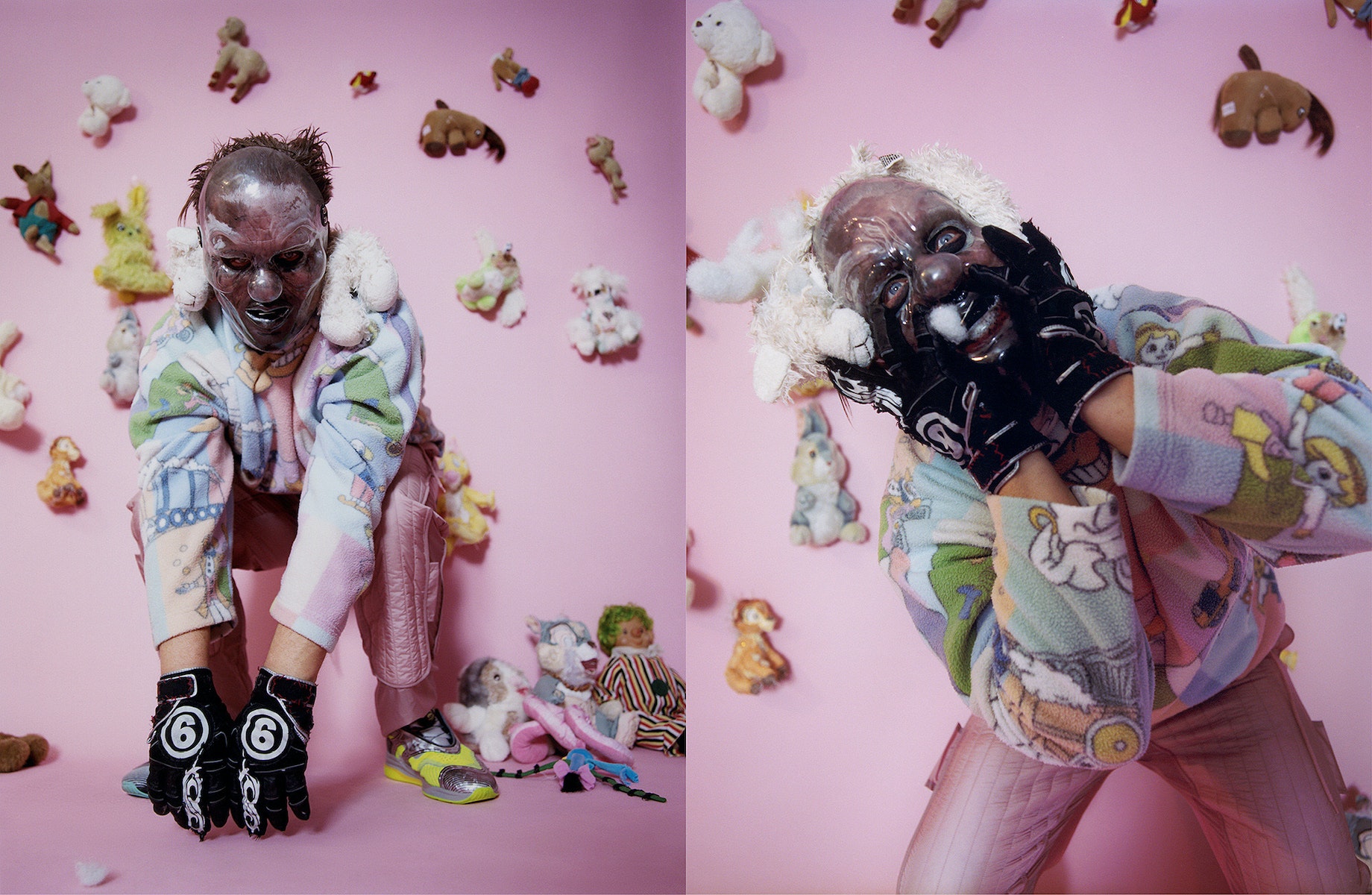 Last year Crahan’s daughter, Gabrielle, died at the age of 22, in undisclosed circumstances. He addresses it for a brief moment, and apologises for being ​“morbid”. Her death came when the band were finishing the recording of We Are Not Your Kind.

“It’s a difficult thought process to be in this band and it’s difficult to continue. But I believe in myself so much that I go on for my family, I go on for our legacy, and I go on for the people and the kids out there.”

Brightening, Crahan tells me that he feels half his age. After years of being angry, isolated and anxious – yet simultaneously a member of one of the most successful heavy metal bands of the last two decades – he finally gives a fuck about his health and the real Clown that hides behind the mask.

“I’m finally building confidence to love myself,” he says, ​“It feels pretty dangerous to love yourself this much,” he laughs, mindful of the hardcore posturing that attends his dayjob, ​“but I feel good!”

To mark what would have been Knotfest’s kick-off weekend, Slipknot have launched a digital platform including a concert stream and Clown’s new interview series The Electric Theatre.