One of the first pieces you’re confronted with at Fashioning Masculinities: The Art of Menswear, is a Jean-Paul Gaultier jacket from the SS96 collection, Trompe L’oeil: a tailored, boxy blazer with a Grecian torso printed on the front, which Glenn Martens recently paid homage to in Y/Project’s AW22 collection.

Rock-hard abs, defined pecs and a flaccid cock reaching the bottom of the hem, it presents a typical masculine ideal – the gladiator types favoured in the bodybuilding era of the 1980s. Here, Gaultier gloriously embraces masculine tropes, as he has throughout his years as a master of sexy subversion, whether through ripped, saucy sailors or the ever-present torso bottle that holds the best selling fragrance, La Male – the scent of a thousand boys on the edge of adulthood.

For this new V&A exhibition dealing with the history of modern menswear, the first port of call is a swift reminder of the changes masculine ideals have undergone in the past few years.

At the time of Gaultier’s mid-’90s collection, the waif reigned supreme – skinny boys with dark circles and pseudo addictions. His take on hyper-hench masculinity was, therefore, a subversion of the then-modern ideal. Since then, we’ve seen trends in masculinity come and go, from the rise and fall of the pot-bellied lad and the re-emergence of the indie waif to the Love Island gym bros, to name a few.

But now, politically, both on the streets and catwalks, we’re inching closer towards increased diversity (to an extent). And, as a result, a shift in masculine ideals has been spurred on by the forward-thinking conversations taking place near enough every day. Finally, the line of acceptance that divides gender, the body and clothing is blurring, and designers have responded in droves. That’s not to say there isn’t more work to be done. But 26 years ago, it was a different landscape altogether. 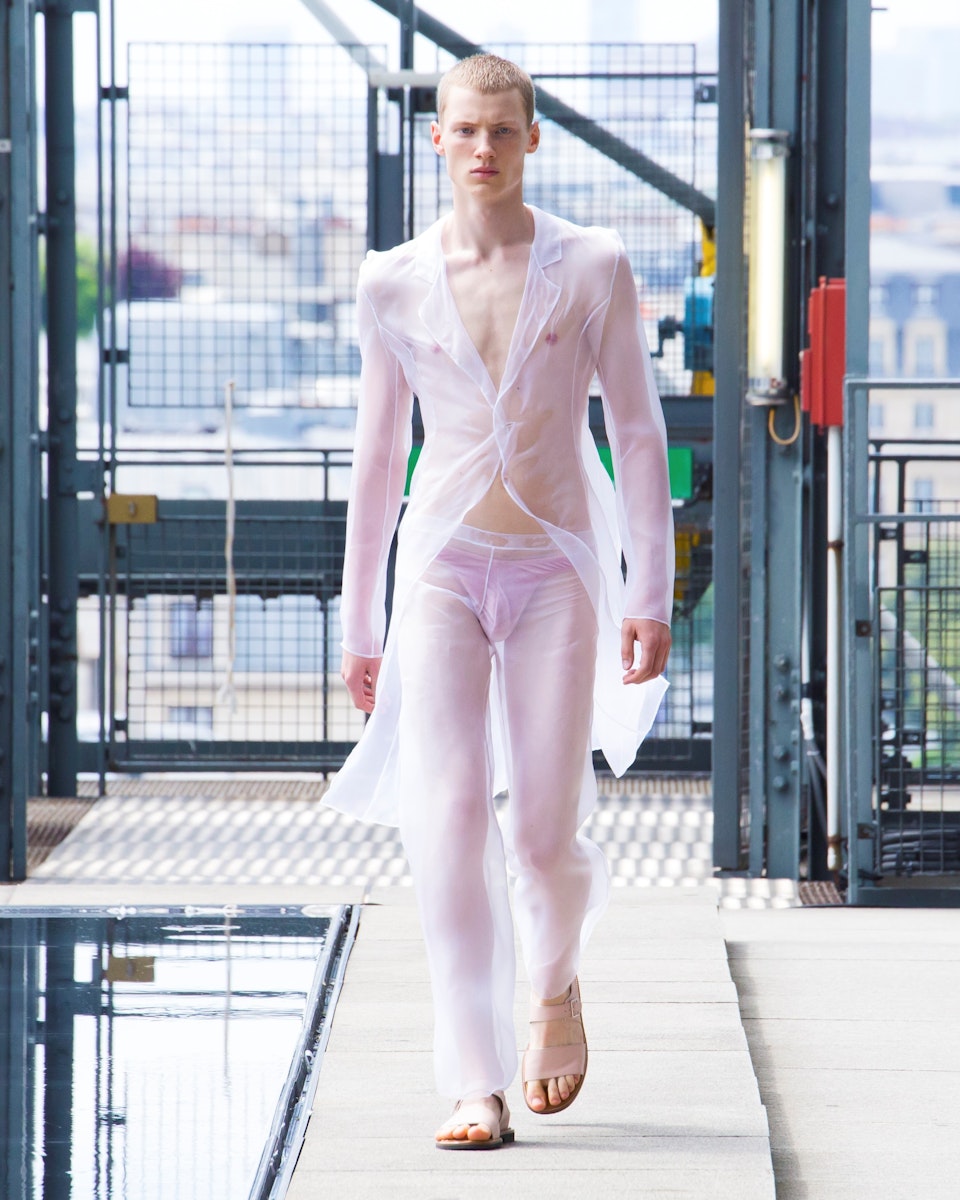 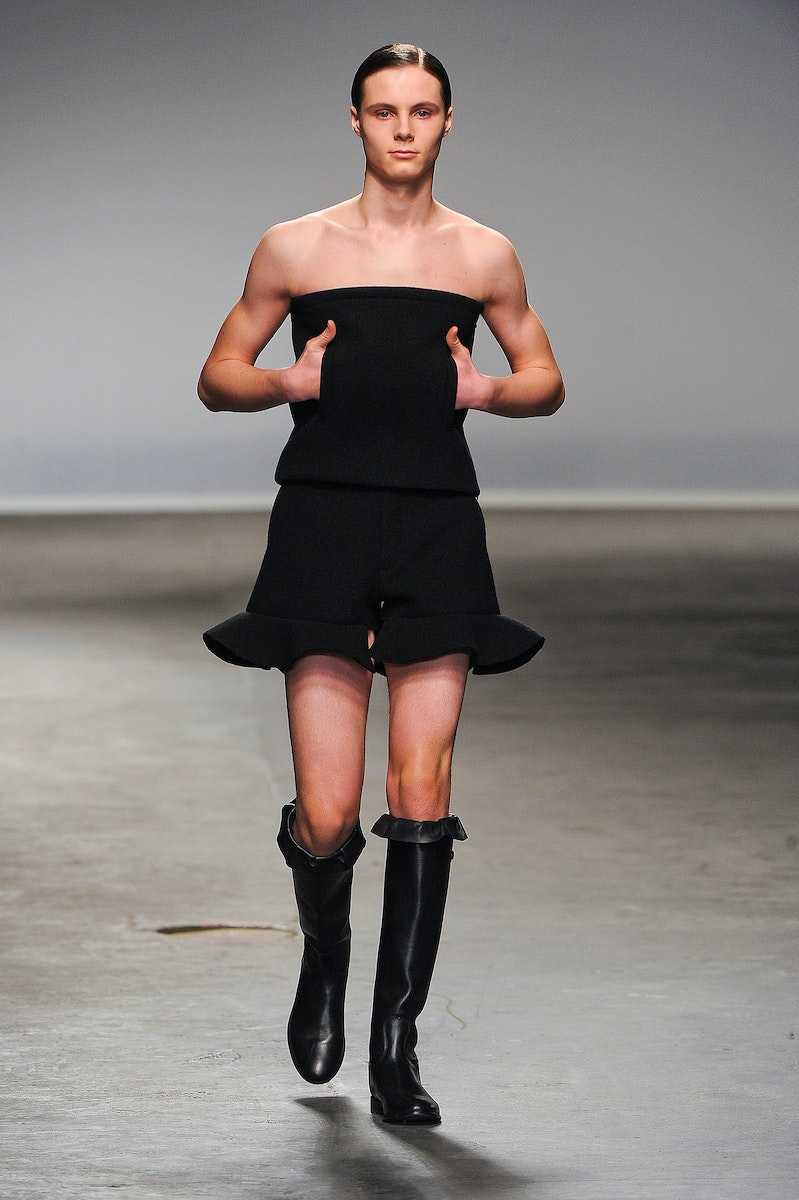 “What we’re seeing is a moment where the boundaries of menswear are being tested,” says Claire Wilcox, curator of the exhibition. ​“That creativity has really been sparked by people thinking beyond binary menswear and womenswear. And that’s what we’re exploring within the exhibition, the relationship between those.”

The first room, where the Gaultier jacket sits, is the ​“Undressed” section of the exhibition. The walls are covered with men in various states of nakedness, whether they’re topless, in tight white pants or totally starkers.

Throughout the history of contemporary fashion, the pieces in this room illustrate how underwear has become an item of clothing unto itself, as well as the shifting politics of each depiction. It tells the story of the varying ways men have been influenced by the world around them and how their changing ways of dressing – and undressing – has shaped marginalised communities.

There’s a striking image by Jennie Baptiste titled Brixton Boyz (2001) hanging on the wall, presenting two Black men in low-rise jeans, Calvin Klein boxer bands visibly sitting snug at the lower waist. Visible underwear is a style that was adopted by youth subcultures in the 1990s, with some going as far to reveal far more underneath.

The style comes from the American prison system, where low slung trousers were commonplace when belts were prohibited. In British and American culture, skaters, rappers, punks and teenagers adopted the trend as a rebellious code of anarchy, turning it into the quintessential middle-finger style in modern menswear.

We’ve often written about fashion being best when it’s political – because it’s true. The best bits of this exhibition are when it looks at how menswear was used to challenge the status quo, take a stance on racism, homophobia or sexuality, or promote topical messages, such as the lack of Black and Brown designers headlining London Fashion Week, for example.

Around the corner from the initial room, the colour pink is used to dissect notions of unmasculinity, using designs by Harris Reed and Thom Brown. Here, the argument is that pink is all about vigour. Remember when pink stood for, er, metrosexuality?

Further along the exhibition, British designers Wales Bonner, Ahluwalia and Martine Rose demonstrate how Black and Brown designers have harnessed their cultural narratives and explored this sartorially, often through innovative means that explore subcultures, and reference old grainy images and stories from their ancestors.

As the exhibition trails off, the final section looks at black, the foremost colour in men’s fashion, denoting wealth, power and stability through sharp tailoring and suiting. Take, for instance, Raf Simons’ approach for AW00. He designed a frock coat in the style of a Roman Catholic clergy, buttoned from the neck down and as black as the night. Here, the colour becomes a symbol of independence and visibility – and it’s slightly haunting.

The final piece before Masculinities: The Art of Menswear comes to a close is another from Jean-Paul Gaultier, this time from 1997. Tucked among swathes of suits by Rick Owens, Comme des Garçons and JW Anderson, Gaultier’s piece questions what is masculine and what is feminine.

According to the exhibition blurb, the ingenious designer actually used this as a roadmap when designing this collection. The result is a tailored, pin-striped suit with an Indian-inspired sari draped around it (the designer was often influenced by Indian culture in the ​’90s). It’s disruptive, abnormal and challenging to the onlooker.

Why? Because it takes men out of their comfort zones. And that’s the best kind of menswear.