​“We’ve had dad’s cover of THE FACE on the fridge my whole life,” states 16-year-old Herbie Howard of his father’s iconic cover shoot. ​“And grandma has the same picture framed above her TV in the living room. So THE FACE has always been there.“

Style is something that cannot be bought or taught. But it is something effortless and innate when it comes to Herbie Kofi Howard and his younger sister Aba Ray Howard, 14. They walk and talk with the assurance of youth, dressed impeccably from follicle to foot in garms begged, borrowed or stolen. ​“I’m a dustbin when it comes to fashion,” confirms Herbie.

Wearing Dr Martens, Evisu jeans, a Tyler, the Creator T‑shirt and a grey tweed flat cap with a feminine flourish of handbag and pearls, Herbie is quite the modern man. ​“My hat I found on a bus, my pearls my grandma gave to me. Grandma gives me a lot of great hand-me-downs. She lives in London but she’s from Brooklyn and sounds like Marge Simpson. She has a great sense of style most definitely. She’s just turned 71. She is very cool. I love my nan.“

Ray continues the stylish family lineage in baggy Dickies jeans and an oversized MA1 bomber jacket, switch-­reversing the garment’s binary connotations. ​“This jacket is my dad’s. I stole it ​’cause he wasn’t at home. I love oversized clothes. I love Dickies and a T‑shirt. I like simple things. They ­represent me. Herbie is flamboyant and out there ​’cause it matches his personality.“

The siblings first modelled around eight years ago in a shoot called Next Generation alongside Lila Moss [daughter of Kate] and Stella Jones [daughter of Clash guitarist Mick] for Jamie Morgan, the same photographer who shot their father for his cover back in the day. And modelling is something they both want to actively pursue. 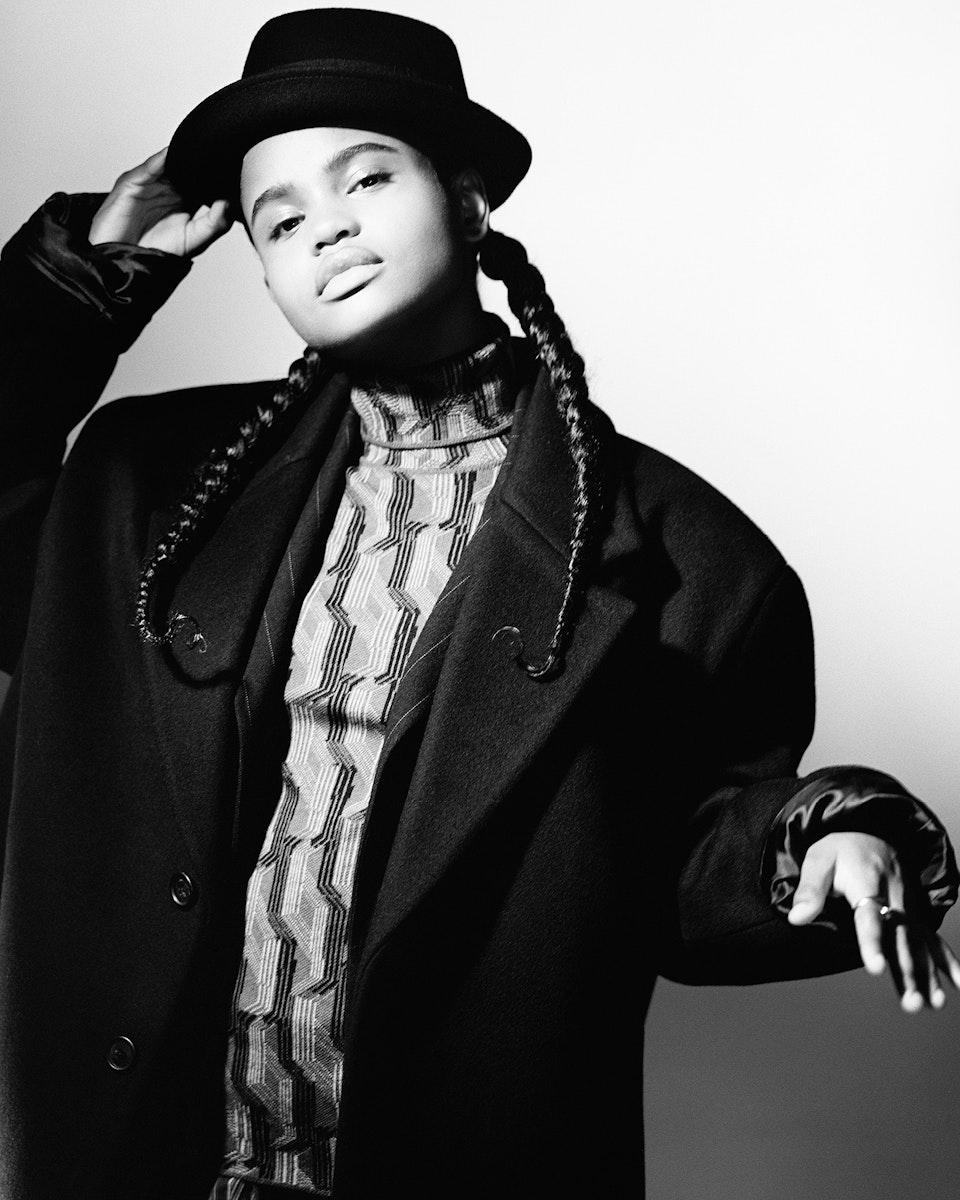 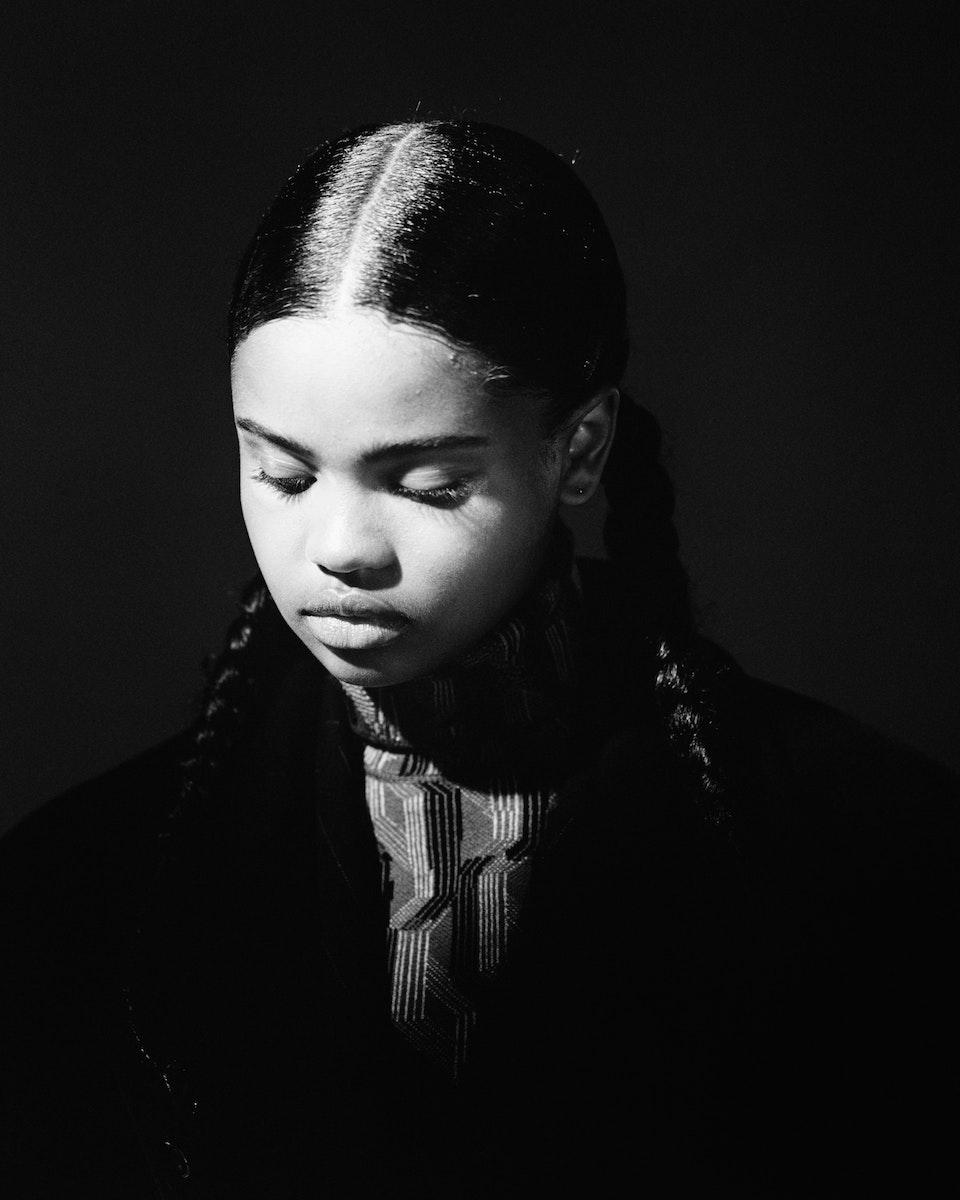 “People have always said we could model. I’m a bit more humble about it but I can’t say the same for Herbie,” laughs Ray. ​“We’re both quite short so I think we can put runway to the side.” What about Herbie? ​“I love it. Of course I do! My friends think it’s very cool.“

School is a space loaded with rules and regulations and both teenagers struggle to align with the system. ​“I hate school,” they say in unison before Ray continues. ​“It’s too difficult to express yourself through clothing, or with your hair or whatever you want to wear. It’s kinda hard. You can’t stand out. You can’t do this. You can’t do that. Neither of us are good at following rules. It’s a clash.”

Their newly realised love for fashion was a moot sticking point, especially for Herbie. ​“I want to wear things that are very, very out there in some people’s perspectives. If I ever went to school in something I actually wanted to wear, it would not be very well received at all.”

Before the pandemic, both Herbie and Ray herded among the crowd. But during it, they found a burgeoning inner freedom. ​“I dressed like the masses for a long time,” Herbie says. ​“I thought if I dressed the same then I wouldn’t get stick. Then I thought, ​‘Fuck that, I’m actually gonna wear what I want to wear. I’m going to wear what I actually think is cool.’ I left school and I didn’t really like anyone. I met friends on FaceTime and met their friends and then their friends, and now I have friends. I would have no friends if it weren’t for the pandemic.”

Herbie’s new peer group of like-minded individuals clarified his true sense of self. ​“We appreciate the same music, the same clothes, the same cars, the same architecture. I wouldn’t hang out with anyone I didn’t have things in common with. They like what they like and they know what they like, and they go out of their way to push that forward.”

When not watching The Big Lebowski, Coraline or Wes Anderson movies, you can catch the brother and sister eating bagels down Brick Lane while serving their fiercest looks. ​“If I’m going somewhere and people I admire are going to be there then I’m going to wear something that is definitely gonna stand out. I need to ​‘Oomph’,” says Herbie, whereas Ray likes to spend her time painting eyes. ​“I have pretty much only drawn eyes for years. When I started drawing it was the only thing I could draw. I want to do something arty, I want to be happy with the choices I make in the future. I want to live my life being happy.“

One important catalyst for their snowballing creativity is the Odd Future collective and its accompanying visuals. Specifically Tyler, the Creator and his video for A Boy Is a Gun, which maps the breakdown of a same-sex love affair played out in opulent palatial surroundings. ​“My sense of style is ­definitely based on the media I put in my head. I watched A Boy Is a Gun and thought, ​‘This is what I want. This is what I need in my life. I need this house. I need these people around me.’ ”

Herbie wants to explore and explode stereotypes, influenced by the whole host of music talent that currently inspires him. ​“Frank Ocean, Syd, Tyler – always. If I’m bored and there’s nothing else to watch I stick Tyler on. It feels nice on my eyes. I look at A$AP Rocky and Skepta, too. I’m interested in Black artists redefining what it means to be a Black boy in the media.”

At the teetering top of Herbie’s fashion bucket list is the quest to find his perfect vintage dress. ​“Of course I would wear a dress, I just need to find the one that’s for me. My friend Rufus gets stick when he wears a dress, of course. Some people are like, ​‘Wow, that’s sick,’ but some people can’t hack it.” 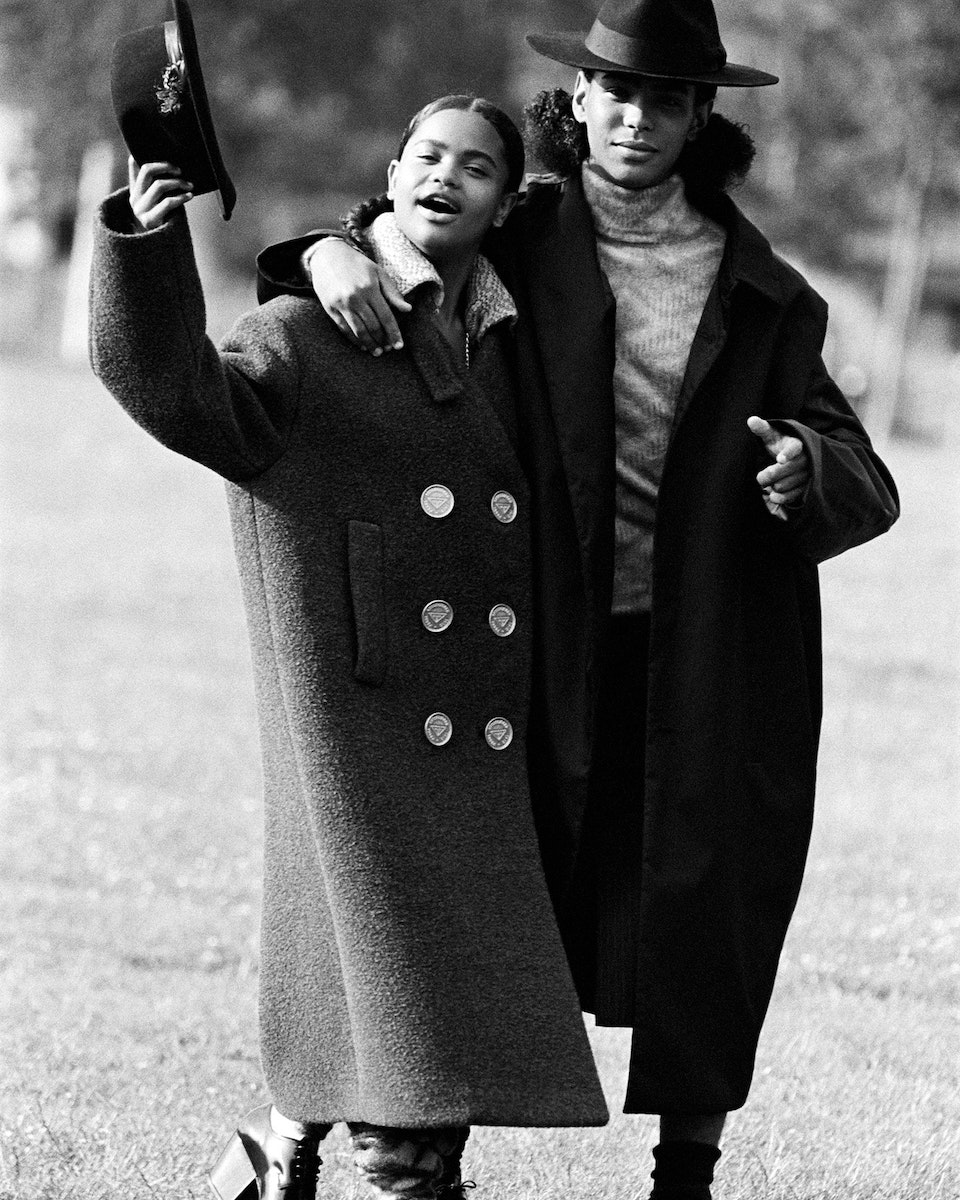 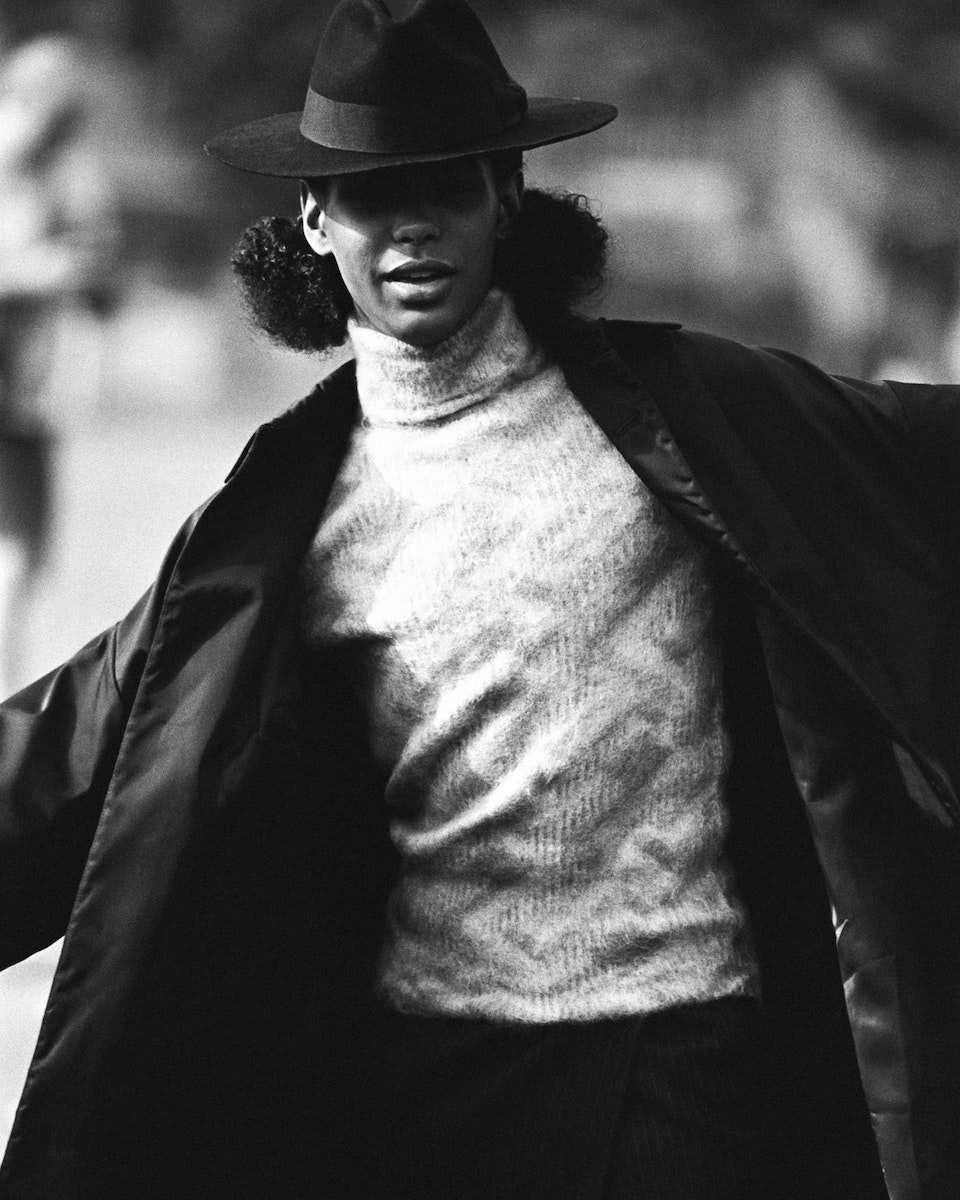 Herbie and Ray grew up in a house filled with love and music with mum [Serwah] and dad playing reggae, classical and everything in-between. ​“We grew up with music,” Ray remembers. ​“Mum and dad would play anything and everything. We’ve been spoilt.“

They both confirm that mum’s mac ​‘n’ cheese is their death row meal and state that she is their hero. ​“I most admire my mum,” says Ray. ​“She has a very hard job looking after us. We are both so difficult. She’s just sick though. She’s doing a great job.“

The brother and sister, both Scorpios (known for being tough-minded and biting), share a love for Zoe Kravitz, Zendaya and Hunter Schafer, current star of the Prada ­Galleria campaign. Speaking of Prada, how was wearing the A/​W collection for this cover shoot?

“The shoot was a great experience,” says Ray, before Herbie completes. ​“Running around in the park in the emerald green furry coat was great. I had a pinstripe skirt on; that was sick. I love the new Prada collection. Prada, give me free stuff! Sponsor me, Prada!”

The siblings are enjoying playing with fashion and hope it leads to adventures in front of or behind the camera. ​“I’m 16, I’m young. I don’t know what I’m going to do yet. But I’ve got time,” Herbie admits. ​“There are too many people that wear things and do things because other people do. Don’t be afraid to stand out. You can be whatever the fuck you want to be.” 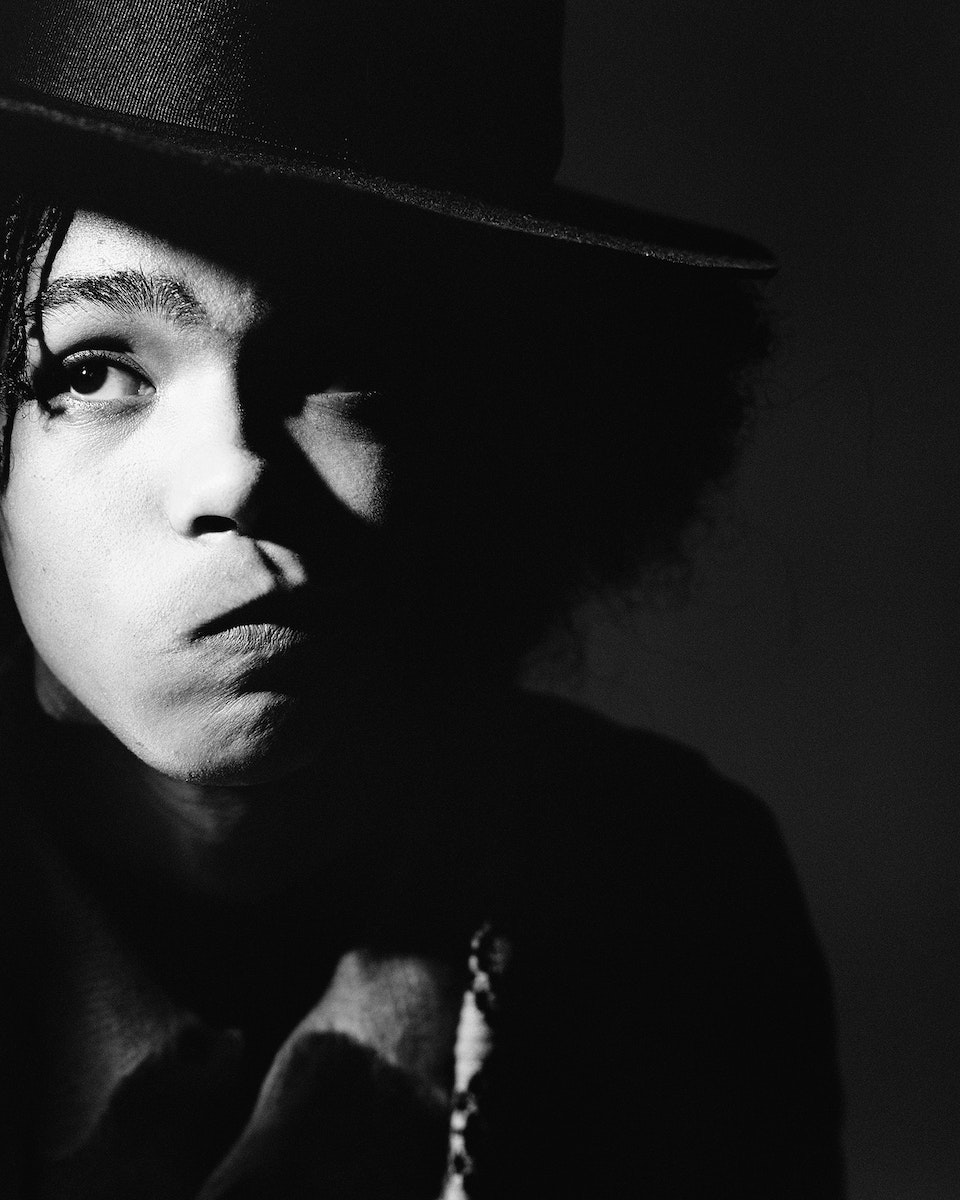 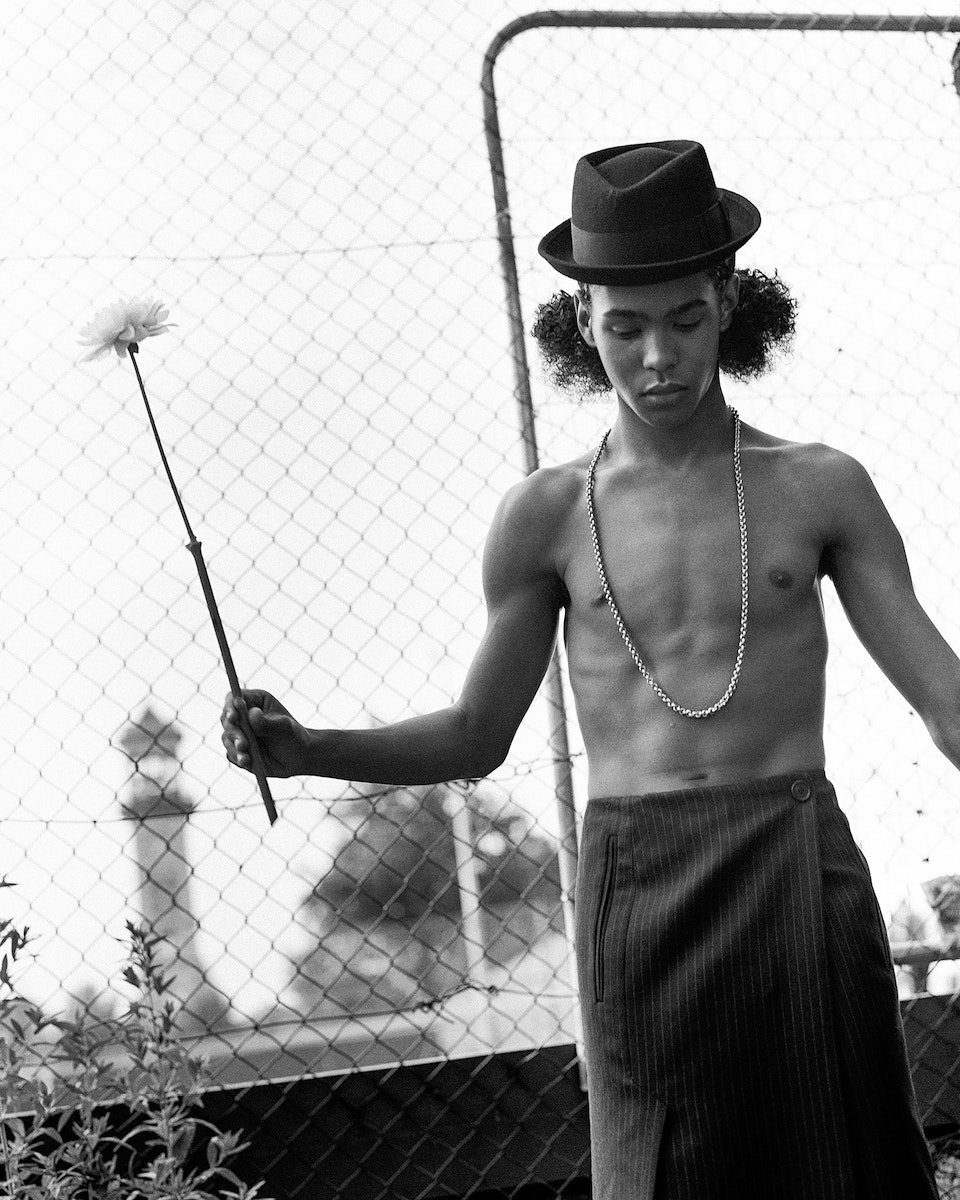 What are your memories from the cover shoot for THE FACE?

I was 12, it was 36 years ago… So only impressions. I remember Ray [Petri] looking happy, pacing around. It was in a studio somewhere, raining and dark outside. Ray was teasing me a bit. Jamie [Morgan] was being his usual ebullient self. I thought it was cool, but it was just an afternoon. I had no idea, none of us could have known what we were channelling that day.

Tell us why you named your daughter Ray.

I always knew I’d have a kid called Ray. All of us were very affected by his passing, by all our friends who died of Aids [Petri died due to complications from Aids in 1989, at the age of 41]. It was a terrible time and I was 16. I’m seven years older now than he was when he died. He accomplished so much in his life and I’m very proud of him, to have been taught by him. Serwah and I named [Ray] after a great man, who would have loved her.

How does it feel, more than 35 years later, to see your children have a similar experience for the same publication?

​“History doesn’t repeat itself, but it often rhymes” [a quote by Mark Twain] is what I think about it. It makes me smile and reminds me of the big circle. I wish Ray Petri could have stuck around a bit longer to see how far and deep his legacy would run. Herbie and Ray had a good time doing it. They’re a lot more daring clothes-wise than I ever was. Which makes me proud. 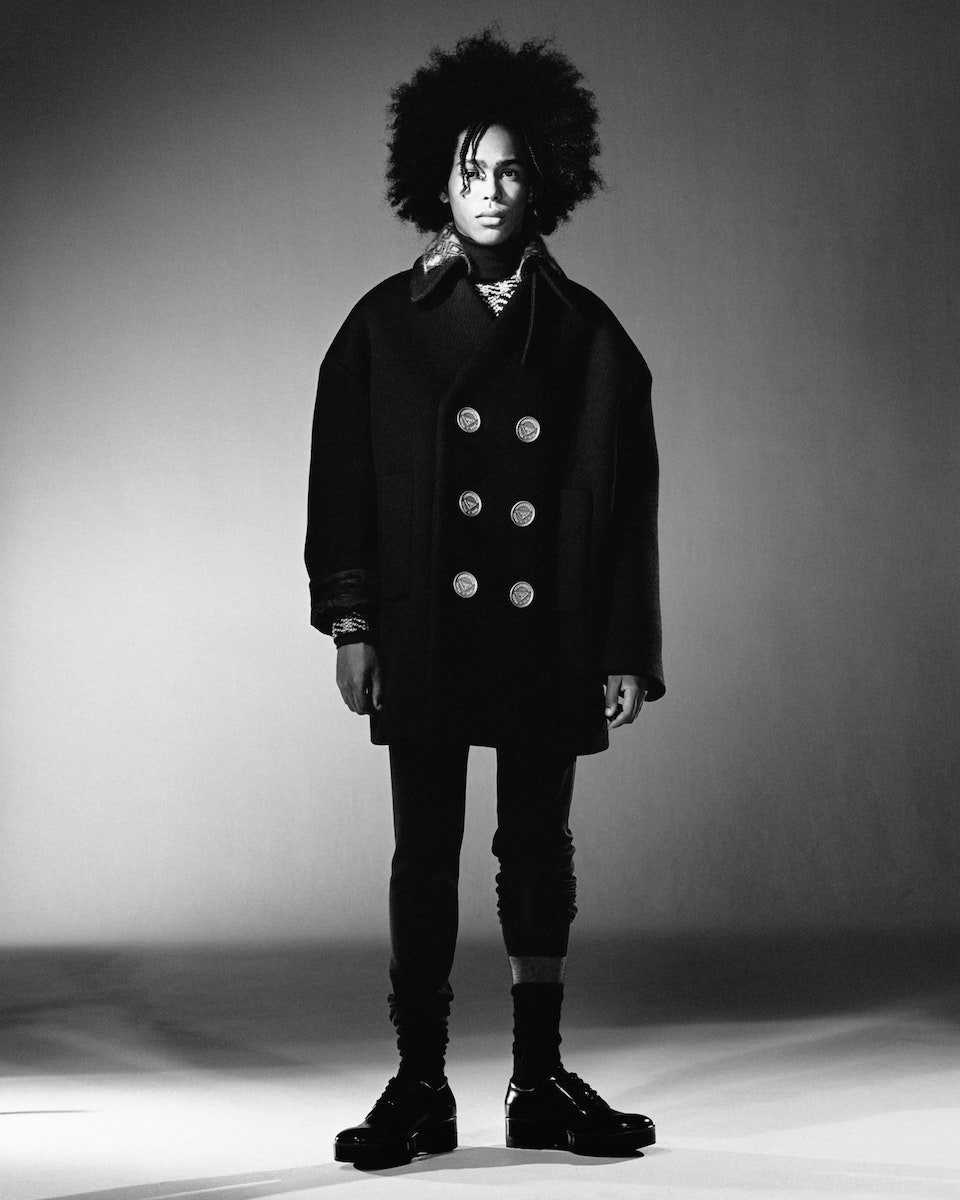 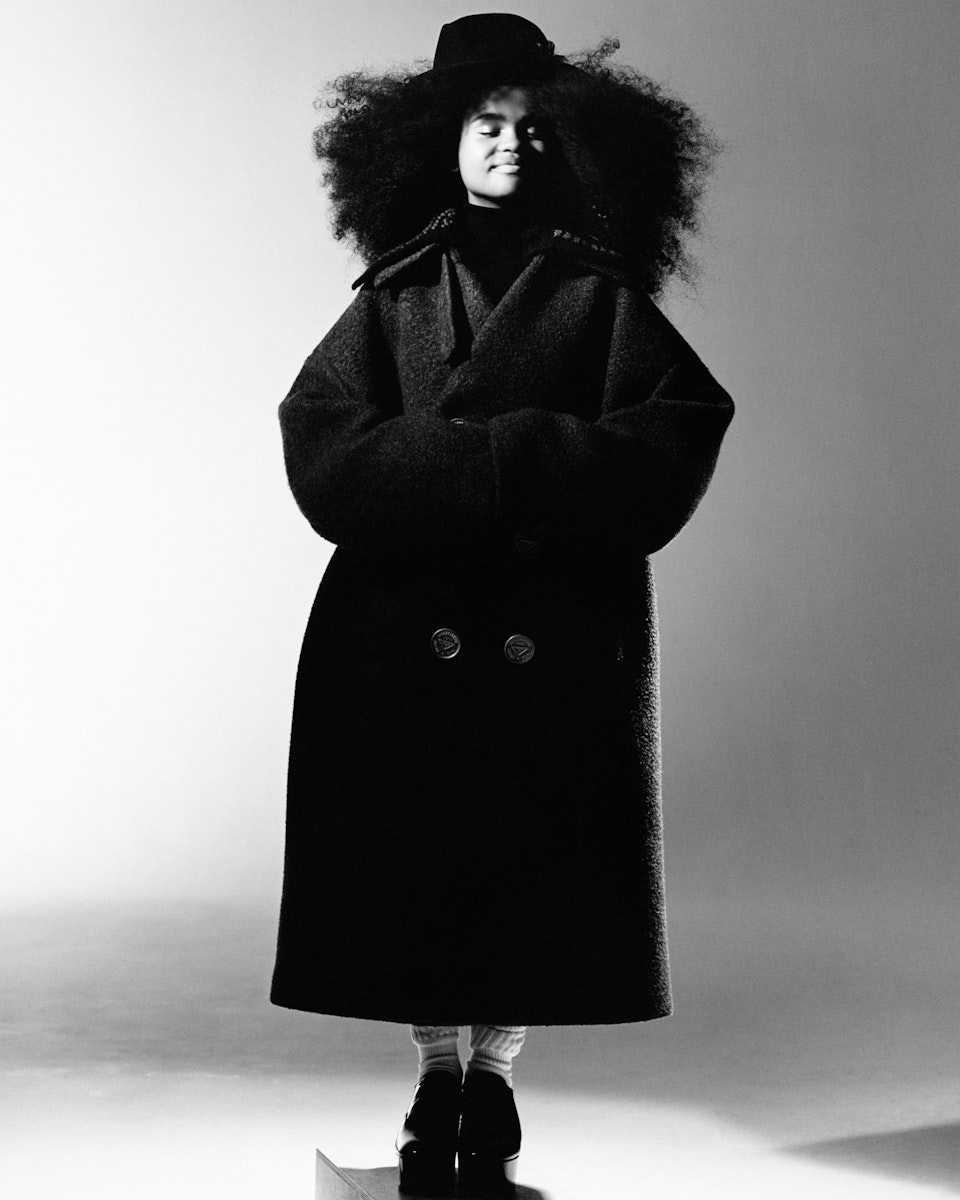 How does it feel to see your children on the cover of THE FACE?

It makes me feel immensely proud, it makes me happy to see them begin to forge their way.

Did you always think they had great style?

Both were born with an innate sense of themselves. It comes as no surprise to me that they enjoy and express their individuality and creativity through their clothes and fashion effortlessly.

Can you remember a specific moment when they started to show an interest in clothes?

As soon as they could ­articulate what they wanted to wear, they did so through the colours they wore or the outfit chosen. Many a time, when they were younger, I’ve been accompanied by a superhero, ballerina or book character or two to visit friends and family, the supermarket, doctor’s or park. 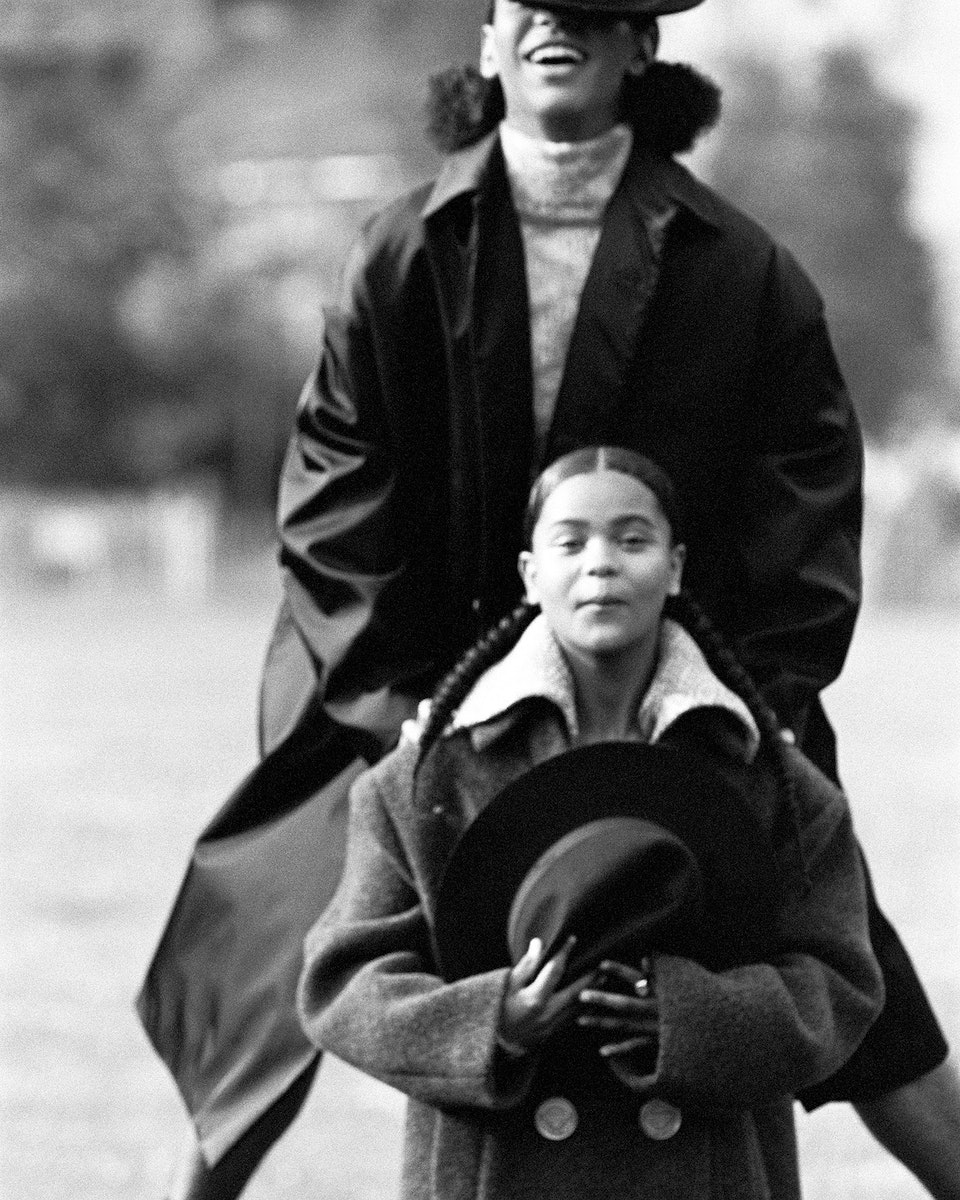 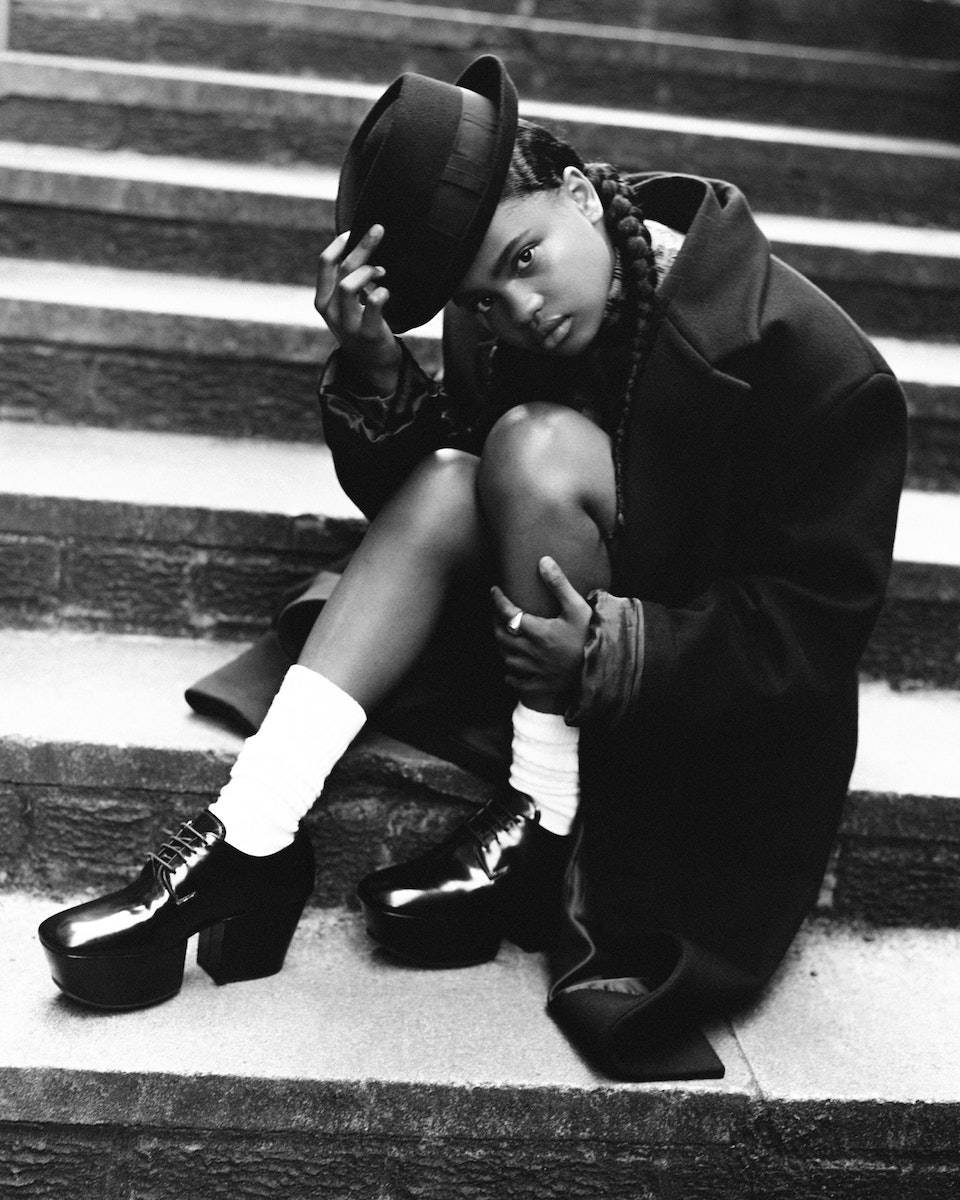