“Did you know that there’s more blokes than there are species of fungus on planet Earth?” That’s what Jack Lammas reckons, at least. He’s part of Blokes, a disgusting, guttural, gnarly group of red-blooded men, who extinguish fag butts on tongues, break glass over their heads and skate.

Made up of Lammas, Craig Questions, Jake Snelling, Ed Hubert, and Dan Singer, the London-based skate collective got their first bit of love back in 2019 with their debut video, Blokes. Opening with an Eastenders-worthy bust-up, the 30-minute film is every bit as dramatic as Dirty Den handing poor Ang the divorce papers on Christmas Day ​’86.

Like a knock-off of the ​’ooligan classic Football Factory, the Blokes meet the other blokes down a derelict path and, dressed in sports casuals, they fight. Not a scrap, but a fight. At one point, man-in-wig from earlier plucks out a poor sod’s eye straight from its socket. Then he eats it. Whole. A couple of headbutts, swings and bone crunches later, someone’s head is bleeding. Next, a squid is pulled out of a bloke’s stomach. Then, in comes the siren:

Starting around five years ago, it all kicked off after some drunken drawings by Lammas. After sharing it with his pal and really good cinematographer Ed, he reworked it into a storyboard for the film where the Bloke eats an eyeball. ​“He managed to decode the ramblings of a bunch of tits shouting indistinguishable bollocks and made the opening scene possible. Hats off to tha man.”

While we sit tight for Blokes 2 – their merch sales go towards the making of the film, so buy it quick – THE FACE gave the Blokes a Google Doc with a bunch of questions and let ​‘em ​’av it.

*Thoughts, opinions and profanities Blokes own 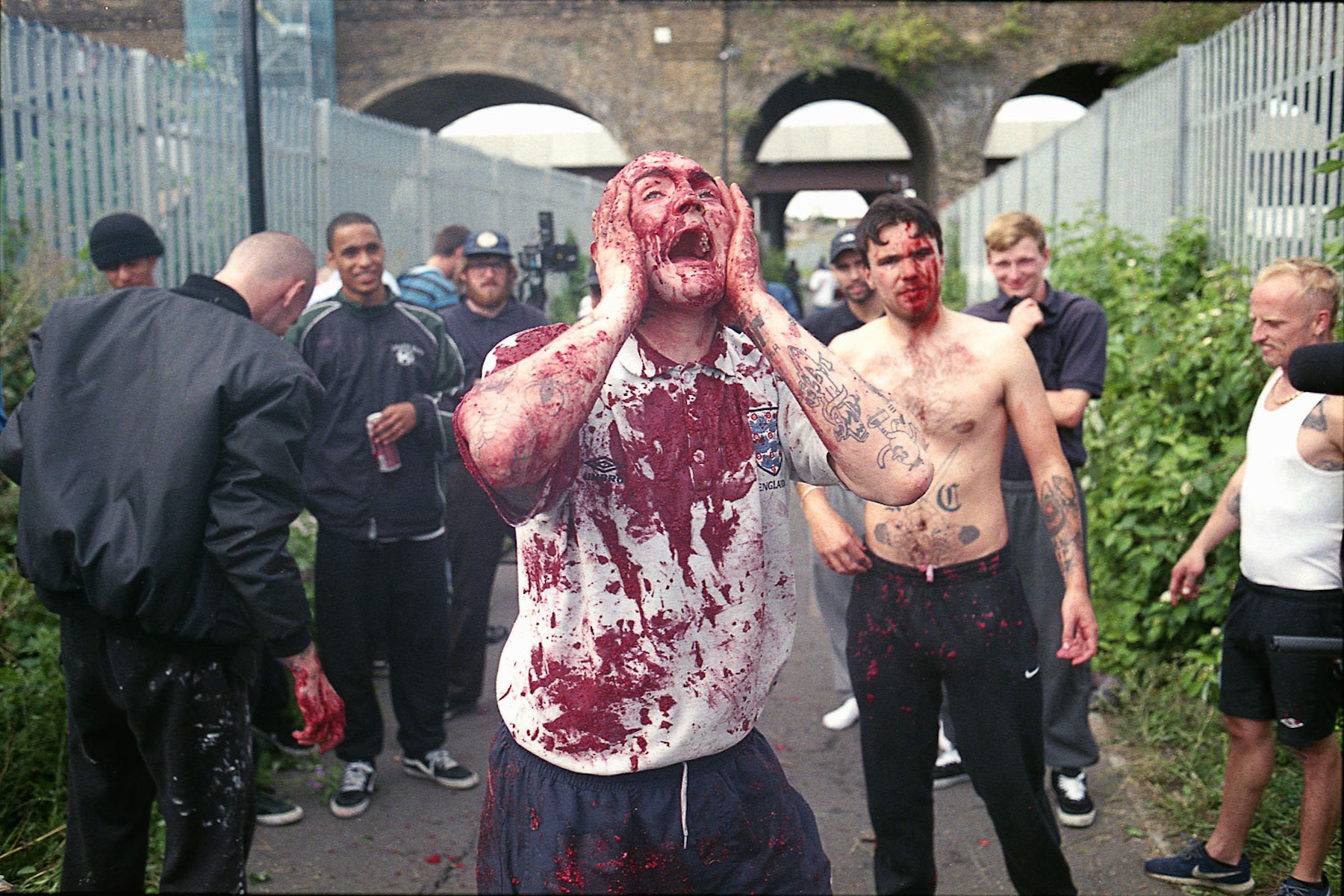 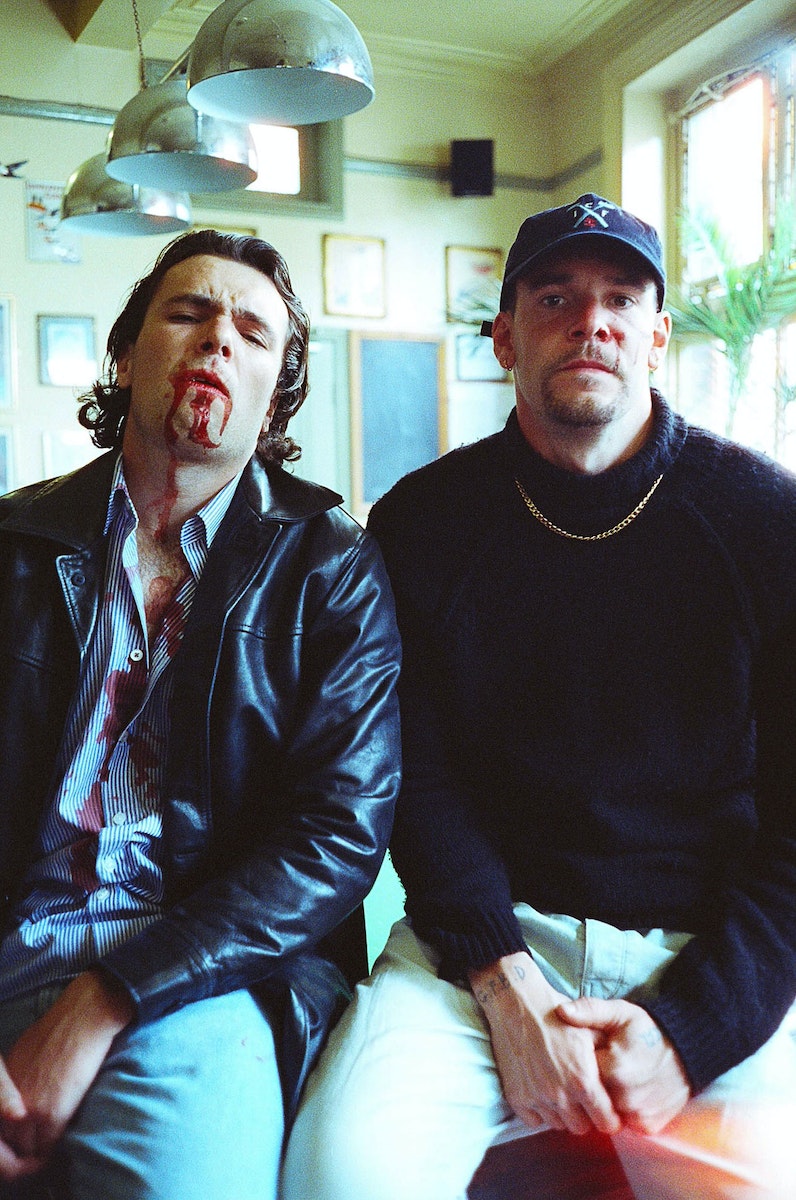 Who are the Blokes?

Jack: Well, that depends who’s asking. Snitches get stitches ​’n all that. We don’t grass… apart from Craig, he’ll spill the beans alright.

Craig: Saint Craig, Scott the Elder, leader of men. The Rev, Jack Lammas, speaker of truth in a world of no light. Third appointed Daniel Singer, bringer of hope, master of all. Jake Snelling, the brave, appointed chief-in-command, the King of Camelot himself, Arthur, ruler of the Brittons. Edward the Great, alchemist of chaos, forever turning gold from the ghosts of base, metal and rain water. The achiever of eternal life.

When did you become Blokes?

Craig: The dawn of civilisation.

Jack: Right from when we were little baby chavys, sitting in the baby bouncer, tinny in one hand, snout in the other, spitting on the floor whilst watching Teletext football. A bit like that fucked up baby in Peter Jackson’s Braindead.

In truth, as long as we have all been mates. I think every group of mates thinks of weird scenarios or stories. The only thing we do differently is mix up a bit of porridge with red food dye, buy a lamb’s heart and film it.

Dan: You ain’t the taxman are you? One of the first skits I can remember was when one of us had a hole in our shoe and it turned into a whole reenactment of the briefcase scene from Falling Down.

Snelling: It’s always been inside us. Jack was the one who kicked it off, then we all came together and shit hit the fan. 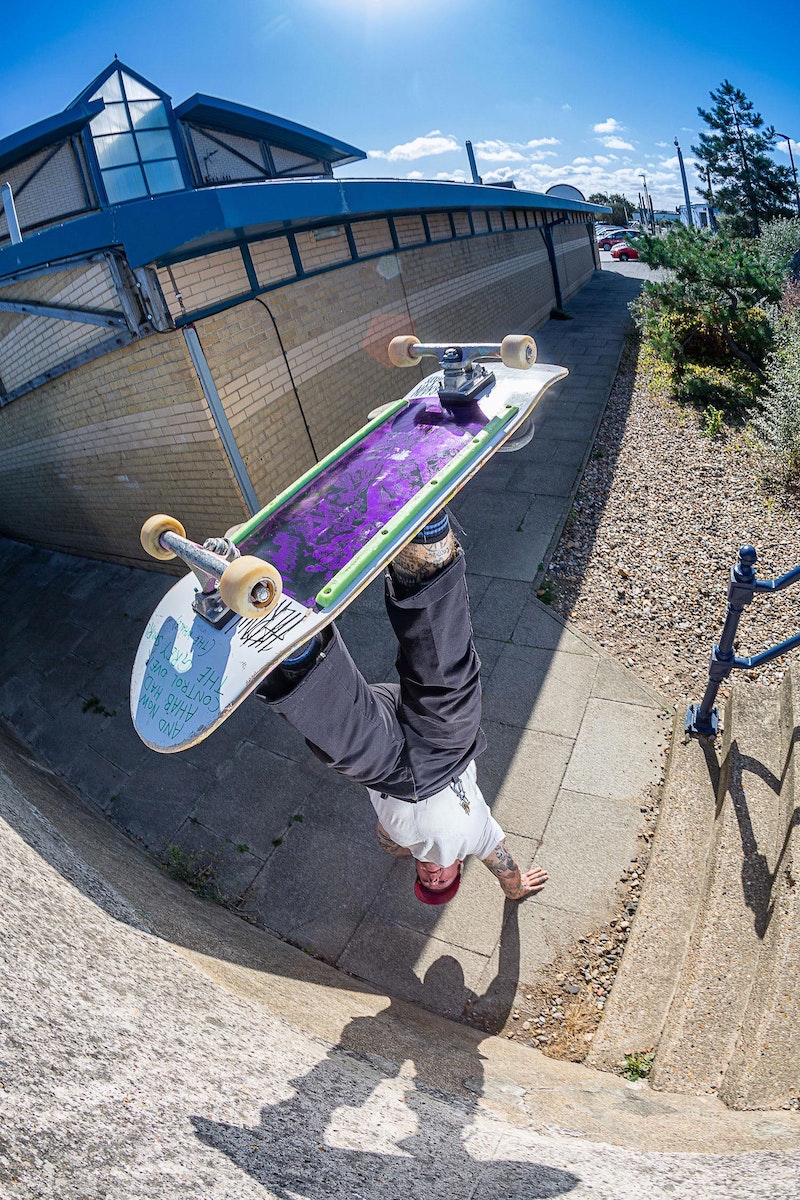 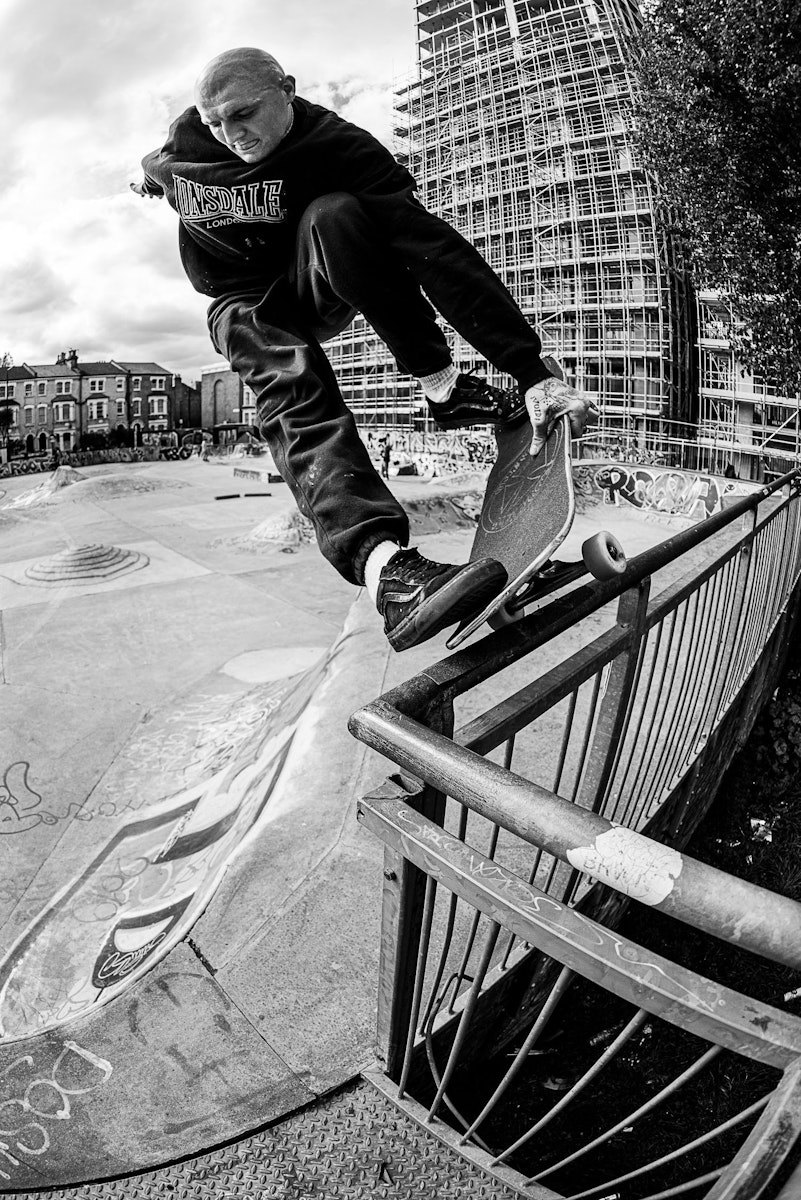 Alright, so you’ve always been blokes. But when did you blokes become Blokes?

Craig: No idea. Just a merge of atoms in a large cosmos, curling in the perfect rotation to create thus.

Dan: A long time ago in a galaxy far, far away.

Snelling: When we were in New York five years ago, Jack had the idea of filming a parody of Larry Clark’s 1992 film, Kids, where a bunch of blokes who skate from England all go to New York for a trip and end up all getting chlamydia instead of AIDS.

Jack: Just before we went to New York on a skate trip we kept saying ​“this is gonna be just like Kids” (the ​’90s movie that terrified every teenager having unprotected sex). The penny dropped that we were all getting on a bit and it wouldn’t be like Kids at all, it would be BLOKES!

After that, the ideas Rik O’Shea’d back and forth. On a bus back to Brixton after a bit of Chinatown karaoke we made up a gory story of a hooligan brawl that goes sideways. That night, I wrote out a rough storyline and drew a pretty shit storyboard with an HB pencil on lined paper and sent it to Ed. Then Ed (the genius that he is) managed to decode the ramblings of a bunch of tits shouting indistinguishable bollocks and made the opening scene possible. Hats off to that man.

Ed: We sat on that dynamite idea for a while, then one day Jack rang me from the back of a bus. I couldn’t really hear what he was on about. All I caught was ​“Football Factory… intestines… squids.” I thought, ​“Perfect, what could go wrong?” Jake rounded up 20 extras (idiots) from Stockwell Skatepark, I got hold of a posh camera and the next weekend we filmed the thing. Somehow, no one got nicked and it wasn’t a complete disaster. Me and Jack then did a lot of late nights in the edit suite, searching for the perfect fart noises to complete our vision. 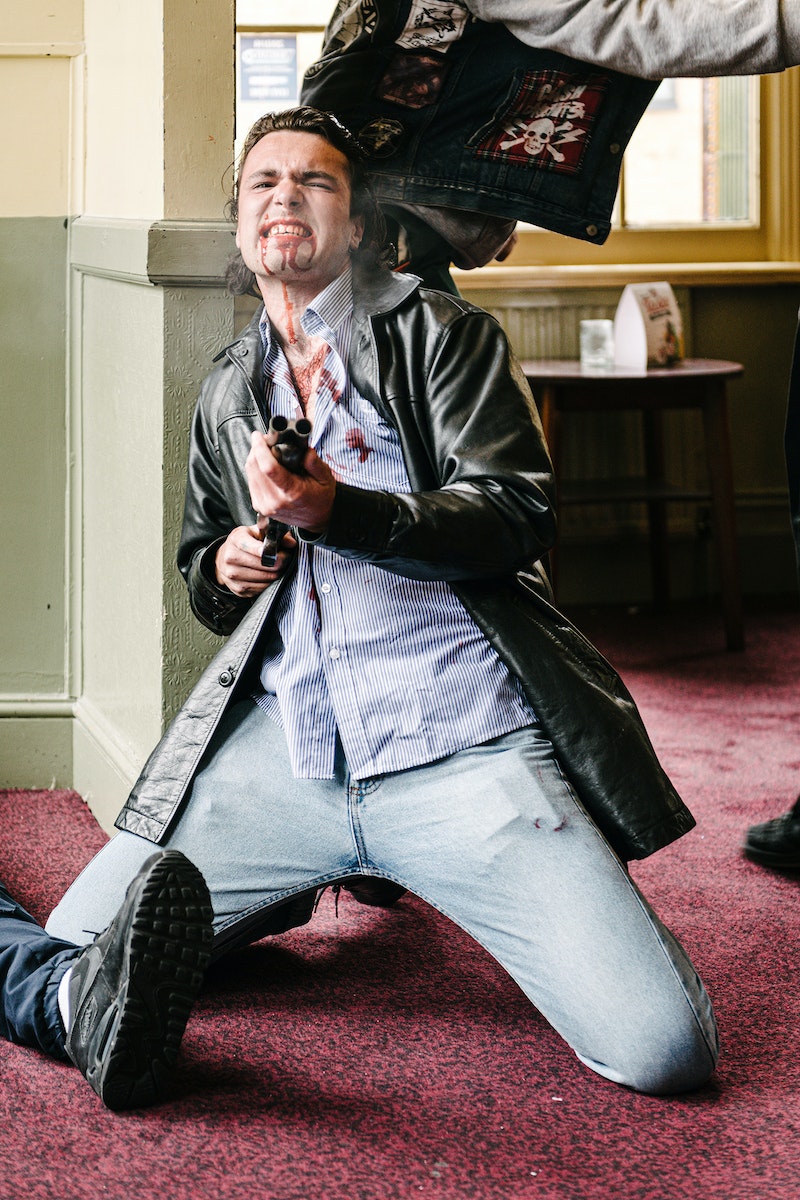 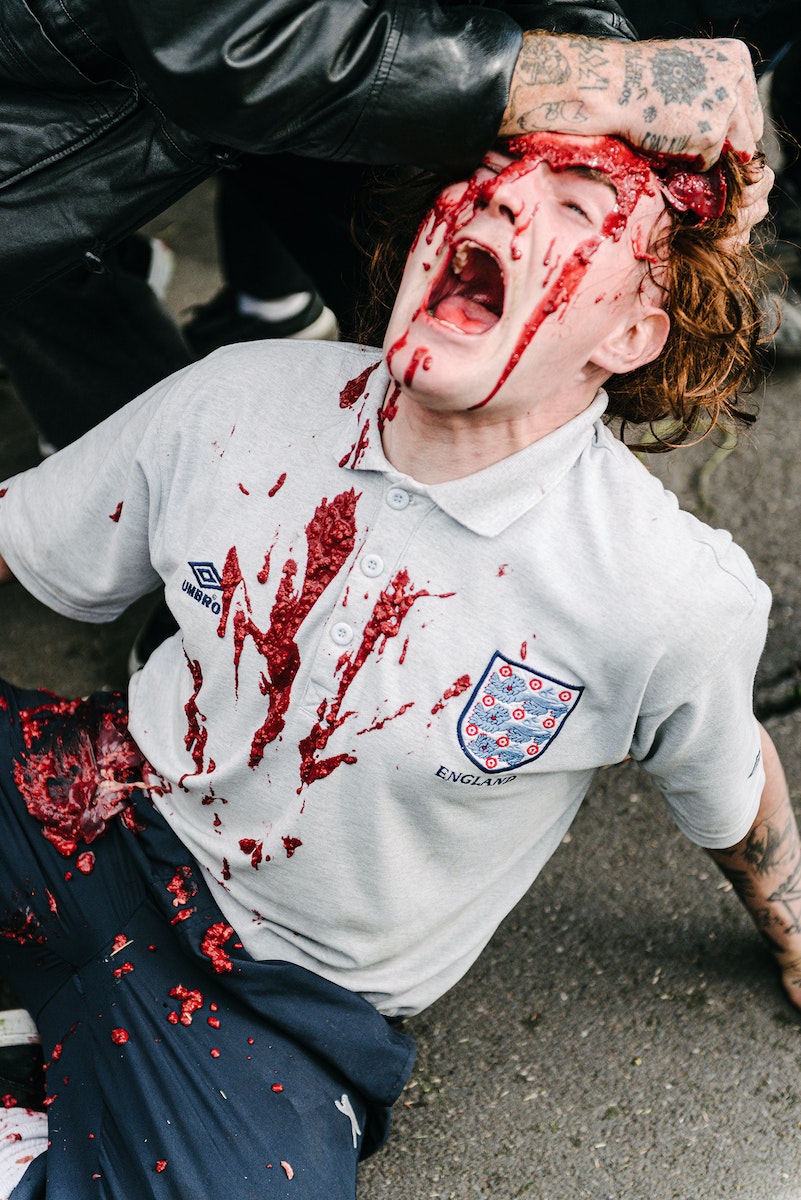 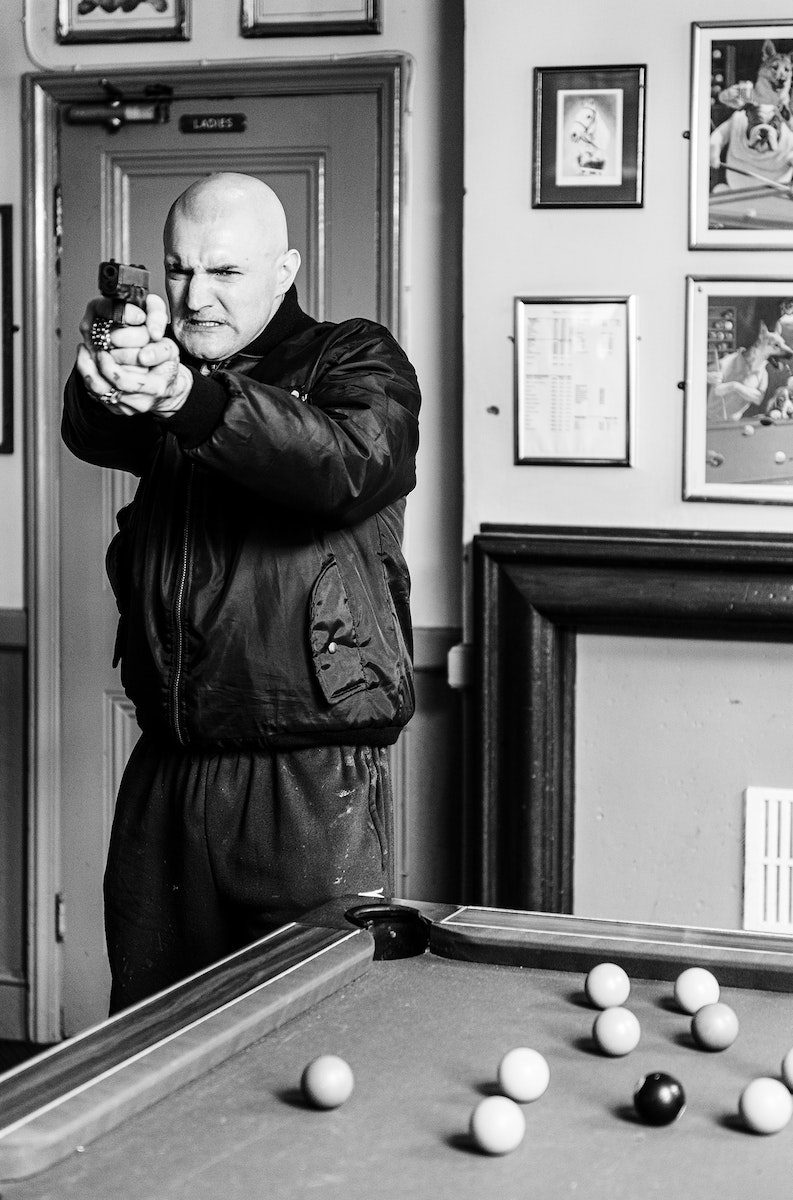 What actually is a Bloke? For those who haven’t seen the masterpiece…

Jack: A Bloke is a geezer. A geezer is some mush down the pub that’s just blown his last 20 bar down Ladbrokes and is now cradling Stella, still thinking he’s king. That’s just one.

To anyone who hasn’t seen the film: I SAY YOU AIN’T LIVED, BOI!!! Just kiddin’. If ya love British culture, television, ​’80s movies and, of course, skateboarding, then look no further.

Dan: Basically, in layman’s terms, a Bloke is someone who can parallel park a transit tipper without shaking like a shitting dog, whilst Chris Rea’s On the Beach is playing from the cassette player.

Craig: A milestone in British cinema. The film that Ken Loach never made.

Snelling: An adrenaline-filled kick in the bollocks. Eastenders meets The Search For Animal Chin.

What gets you Blokes going?

Dan: Only Fools and Horses and Phoenix Nights.

Jack: We all grew up with a love of ​’80s, ultra-violent horror movies and, of course, early Eastenders. I’m talking Dirty Den, Nasty Nick, Steve Owen (Martin Kemp, that tart from Spandau Ballet, not to be confused with Steve Irwin, The Crocodile Hunter), Grant and Phil, Minty, Frank Butcher and Beppe Di Marco. You whack all that together in a Kenwood blender and you’ve got Blokes.

What about the skate stuff?

Snelling: Any skate video with fights in it, raw shit, the Ourlife video, antihero videos.

What does Blokes say about Eng-er-land?

Snelling: It’s OK to be patriotic, as long as you take the piss.

Ed: People read too much into it and try to dissect it. Don’t waste your time. We’re just taking the piss out of ourselves.

Jack: It’s a social commentary on the fucking tits I surround myself with! Just kiddin’. We are all from working-class backgrounds and have had to work manual jobs to make a bit of bunce. Whether it be building sites or wood yards, these are all natural habitats for blokes – breeding grounds, if you will. Day in, day out, we are surrounded by the backbone of this country and we just observe what a bunch of muppets they are. That’s including us. For example, most of us only just made the switch to smart phones a few months ago. It was just a £10 Nokia pay-as-you-go with Snake 2 and a pixelated photo of ya bird’s tits. Jake’s still using his. Big hands, little phone. It’s a dying breed.

Craig: England is a small island that is put down at times, but what country in the world chases a huge cheese roll down a hill in the name of celebration? What island holds a 700-year old gurning competition? What landmass is the home to more goblins, elves, ghosts, monsters and banshees in a folk law that dates back thousands of years? What was the question again?

Can anyone be a Bloke?

Snelling: NO. You either have it inside you or you don’t. Most people think they’re a bloke, but they ain’t. They ain’t hard, they can’t hack it, ​’cos they’re wearing a naff, naff jacket.

Jack: You can be anything you want to be in life if you work hard enough… but not everyone can be a bloke.

Dan: There’s a moment in every man’s life when they must make the transition from a boy to a bloke.

Jack: Where to start… Expect storytelling at its best. It’s a story that will live on, a motion picture milestone. Expect bigger, expect better, expect Blokes 2 in 3D Dolby digital surround sound. We have been flogging a tonne of merch that’s given us funds we didn’t have before and had some favours from some cushty boys that work in film, who are making our stupid ideas reality. Respect to all you man holding it down.

Dan: More blood, more lager and more comedy. Hold onto your butts. This one’s gonna be a shagger!

Snelling: Be yourself. Stop pretending.

Craig: The heart is a lonely hunter.

Be a bloke. Follow Blokes at @blokes_official. And if you’re a proper bloke, buy their merch.