As the old saying goes: ​“a cat has nine lives; for three he plays, for three he strays and for the last three he stays.” This feels like a proverb self-professed ​“New York classic”, muse du jour and multi-hyphenate Julia Fox has so far modelled her own life on, having packed more into her 32 years on Earth than many of us will in an entire lifetime.

Born in Milan, Fox’s early childhood was largely spent in Italy with her grandfather. Then she moved to New York City aged six and quickly claimed the Big Apple for her own. She started clubbing at 14 and, by her own admission, has been fired from every day-job she’s ever had. Since then, Fox has been a regular fixture of NYC’s art scene, carving out a reputation as the ultimate good-time girl with an everything-but-carefully-cultivated public image. And that’s just how she likes it – even though she’s now a bit sick and tired of the club.

Although she broke into the mainstream after starring in the Safdie brothers’ 2019 hit film Uncut Gems, Fox further tumbled into the collective consciousness with a serious bang back in January, as one half of the most talked-about romance in recent memory (who could forget that legendary diary entry, published via Interview magazine, detailing her and Kanye West’s whirlwind date night?).

While some may have dismissed Fox as nothing more than Ye’s rebound, following his messy breakup with Kim Kardashian, make no mistake: she’s so much more than a bit of arm candy. Fox is an artist, a photographer and ex-dominatrix who lives and breathes her chaotic craft. Right now, it feels like she’s the only celebrity who’s celebrity-ing properly, from her viral DIY denim get-ups and dramatically smudged eyeliner to legendary one-liners and one truly mesmerising TikTok rendition of Lana Del Rey’s Video Games. She’s giving us drama, theatrics and looks aplenty. Most of all, she’s giving us something to bloody talk about, all while being a single mum.

Undeterred by the often cutting court of public opinion, Fox ploughs on in her pursuit of self-expression, no matter what shape that might take. For now, it looks as though she’s working on a memoir, which is as yet unfinished but promises to be ​“a masterpiece”. And so, to celebrate one of the most fascinating celebs of our time, behold: a timeline of Julia Fox’s greatest moments.

The launch of Franziska Fox

23-year-old Fox makes one of her first forays into fashion with this luxury knitwear brand, created in collaboration with her best friend Briana Andalore. Fox and Andalore hit it off at a party, during a time when Fox took her pet cat everywhere… Even parties. She channelled the spirit of her dominatrix alter-ego Mistress Valentina into Franziska Fox, telling Elle: ​“I really wished to propose a novel concept for knitwear, a form of dressing that I am most passionate about, and also to have a collection that is unafraid within today’s fashion landscape, in regards to the female form and intellect.” Given Franziska Fox’s Instagram page is no longer available, the brand is most likely defunct by now. 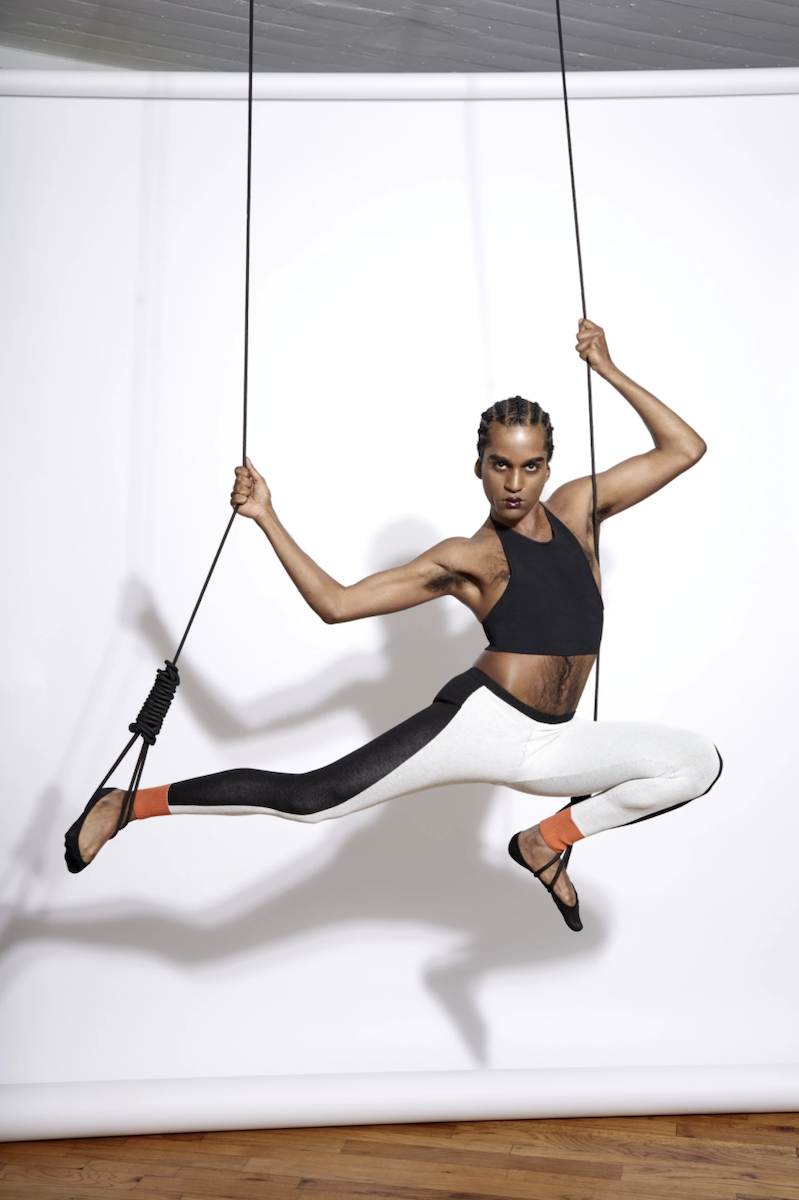 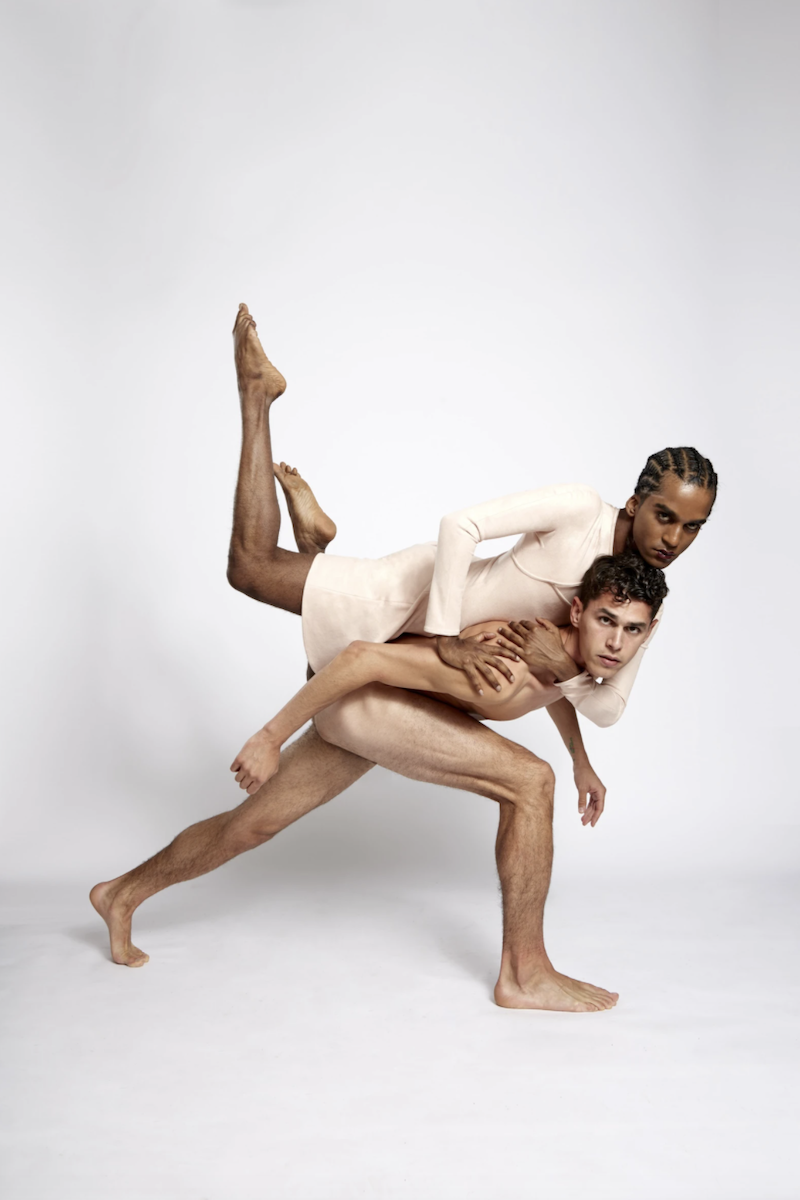 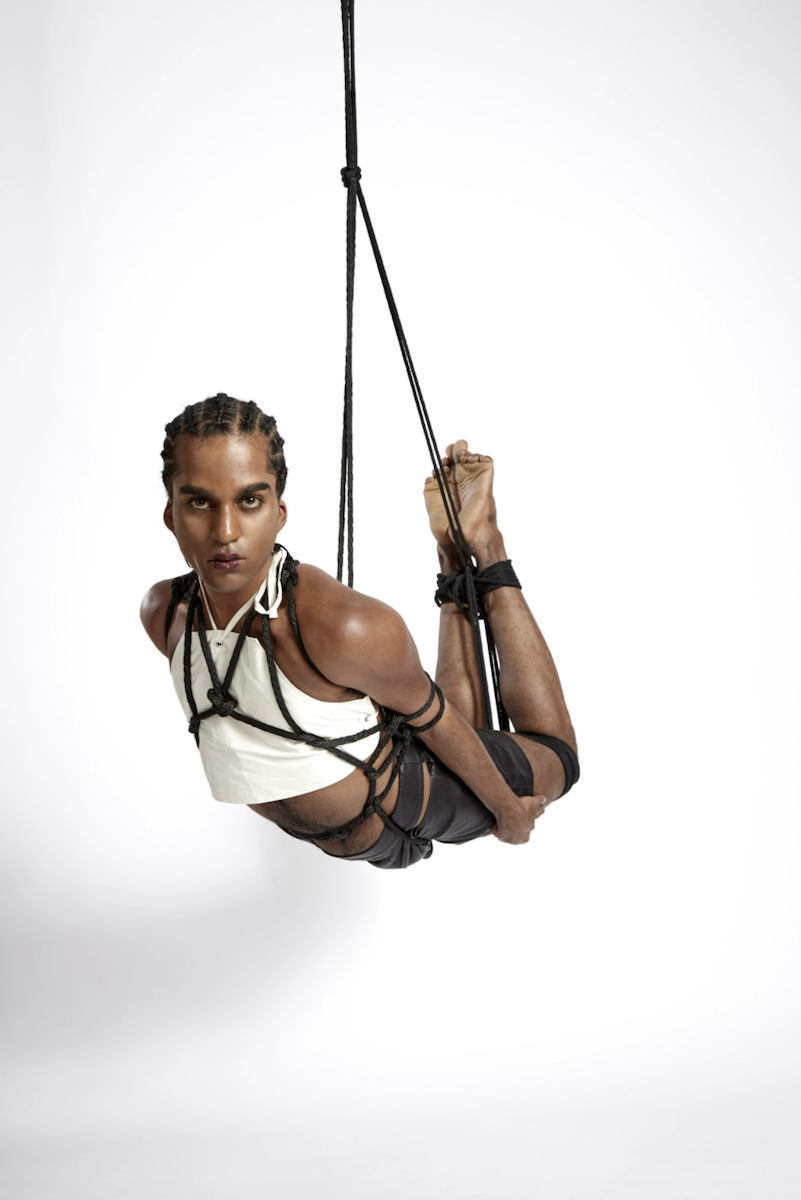 Fox was photographed by Greg Manis in what would become known as the magazine’s last-ever nude issue. How’s that for impact? It’s almost impossible to find images from this shoot without artist Michael De Feo’s sweet flowers painted on top, but the originals can still probably be uncovered in some dark corner of Reddit.

Fox’s first book is provocative, autobiographical and positively Larry Clark-esque. It’s filled with collected artefacts from Fox’s life, such as polaroids, iMessage screenshots, fun facts and plenty of nudes, all of which are used to make sense of experiencing three abusive relationships. Now, it’s reached cult status in the world of underground zines, with people flogging it online for serious cash. ​“The message is that it’s OK to be fucked up. It’s OK to have a past. And more importantly, it’s okay to show your vulnerability and your weaknesses,” Fox told writer Rose Holtermann about the book’s making-of. 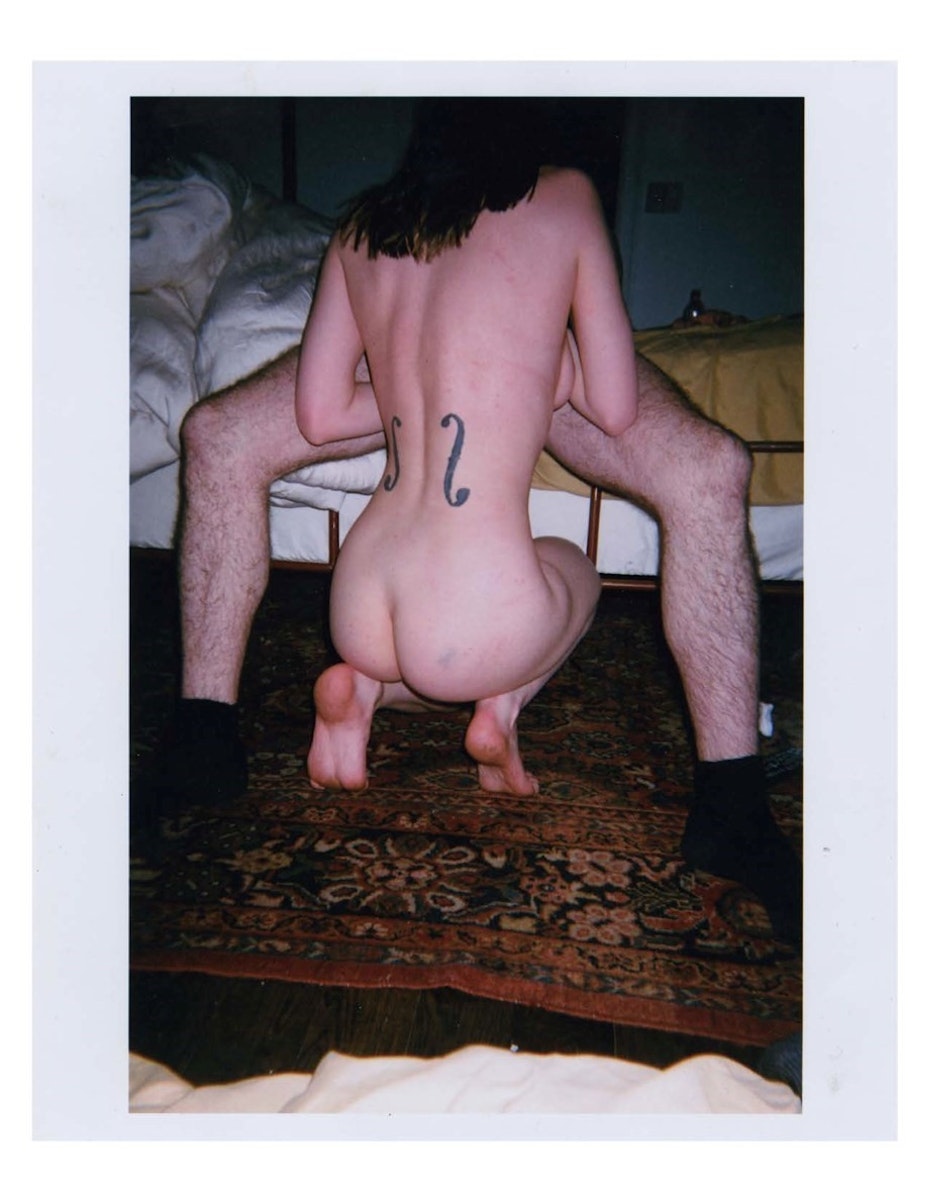 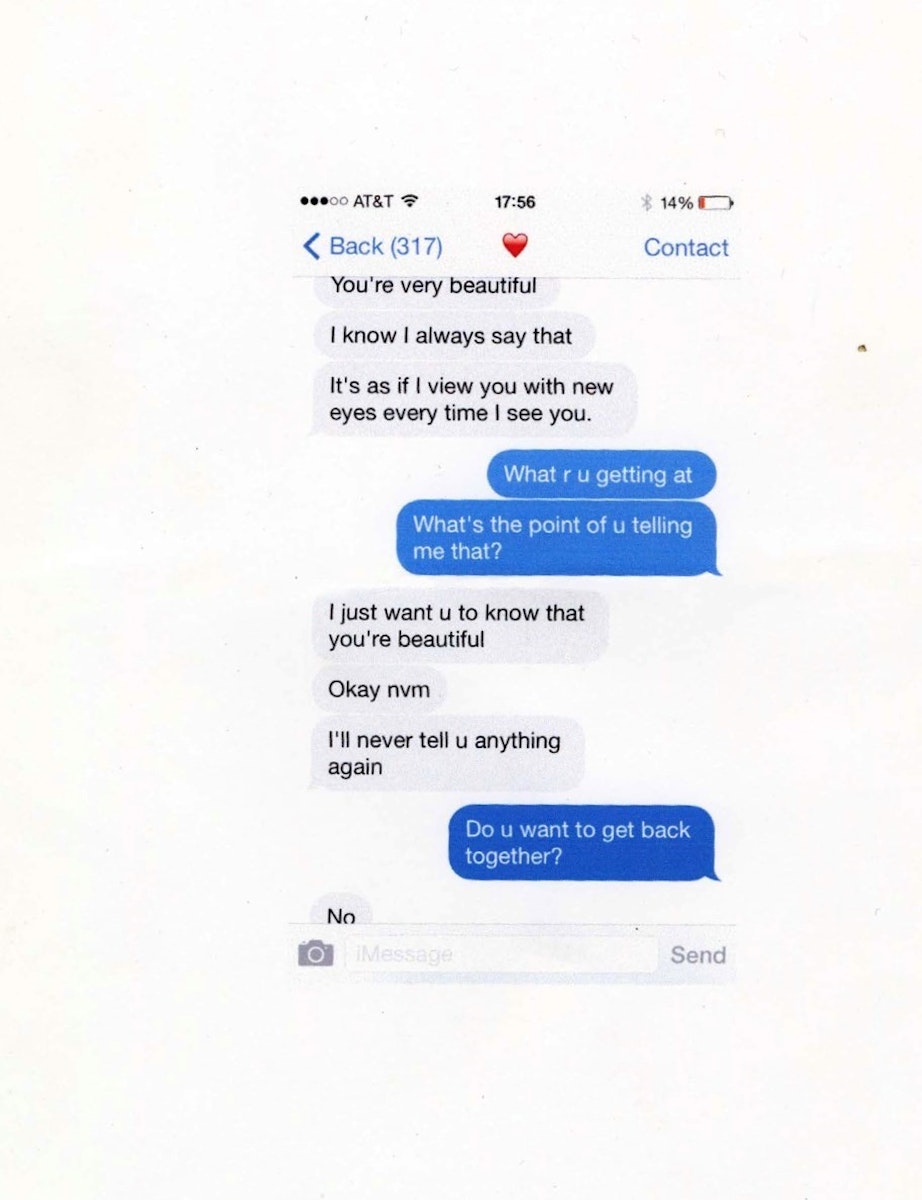 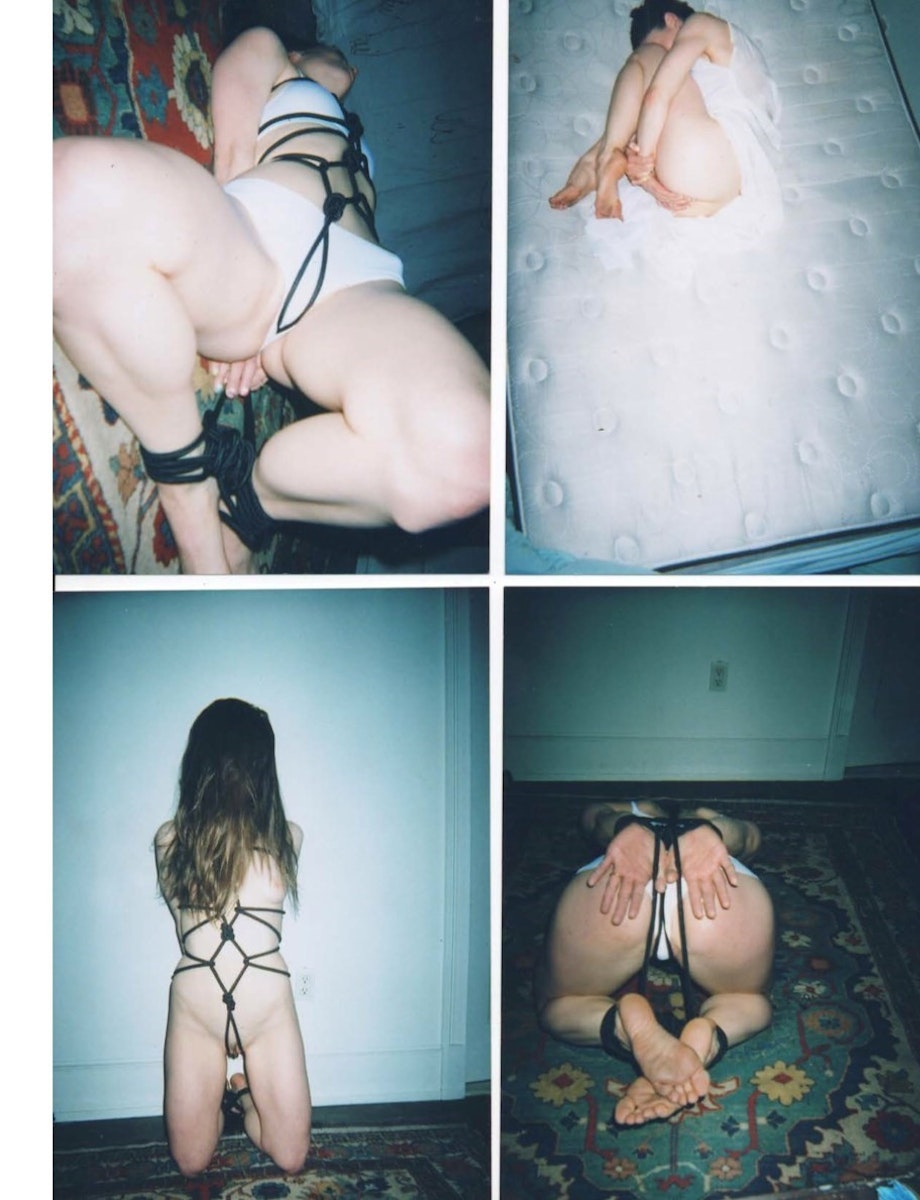 The publication of PTSD

At this point, Fox was no stranger to living life on the edge at any given time. Her second photobook captured ​“an all-consuming six-month love affair with a sadomasochistic prostitute named John” – AKA John Holland, a member of Salem, the polarising witch house electro-rock band (yes, really). PTSD is as NSFW as it gets, featuring nose bleeds and needles alongside evocative landscapes, like a bonfire burning at dusk or a statue looking up towards a cloudless blue sky. The whole thing was a product of six months spent deep in Louisiana bayous, an experience she later recreated in an exhibition at Magic Gallery in New York. ​“I just love feeling things. I usually know when something is going to end up being catastrophic but I don’t really care,” Fox said. ​“I find that the things that end up being earth-shattering are the things that give me the most thrill.”

As you can probably guess by the title, Fox heavily flirted with themes of death for her debut solo art show in New York, which was inspired by a near-death overdose she experienced at just 17. Curated in collaboration with her longtime friend Richie Shazam, it also explores eroticism, fetish, and how these themes relate to rituals and sacrifices. Naturally, a key part of the exhibition was Fox smearing her own blood on silk canvases (she extracted it with a syringe). ​“It wasn’t as bad as it seems,” she told HuffPost. We’ll take her word for it.

The Barbie photoshoot with Pete Davidson

Do magazine photoshoots hold potential to predict the future? Looking back on Fox’s 2019 shoot with Pete Davidson for Paper, we’d reckon so. Dressed up as a plastic fantastic Barbie and Ken, this seemingly random pairing hinged on the fact that Fox was about to launch her acting career in Uncut Gems, which was produced ​“by one of Pete’s good friends”, Sebastian Bear-McClard. It made for a striking set of images, as a dolled-up Fox cradled Davidson’s head on her lap. But no one could have foreseen the tabloid chaos the pair would ignite two years later, when they became the new love interests… for the recently split Kimye.

Fox played red-hot jewellery shop assistant Julia in the Safdie Brothers’ restless, unbearably tense film, arguably launching her mainstream career as an actress to be taken seriously. The role was written for her: ​“they’d been talking to me about this role for five years or something,” she told THE FACE. ​“Always telling me how perfect I am for it, and every few months they would send me an updated script, or ask me if I had any input in developing the character. I didn’t realise the magnitude of Uncut Gems at the time. I just thought:​‘Oh, an indie movie that my friends are making.’” And the rest was history.

Volume 4 Issue 002: The underground star who steals the show in the new Safdie brothers movie.

The directorial debut with Fantasy Girls

The ultimate New York multi-hyphenate, if you think Fox would be content with simply starring in Netflix blockbusters, publishing books and posing for Playboy, you’re obviously completely wrong. ​“I have one short film under my belt, which we just submitted to festivals,” she told Paper in 2021. Don’t we all, eh? Said film was Fantasy Girls, which Fox wrote and directed, telling the tale of a group of teenage girls who get caught up in a Reno, Nevada trafficking ring. Inspiration struck when she visited the city with no plan in place other than knowing that she wanted to make a film. ​“And then I met all these young girls between the ages of 13 – 15 and I knew they were stars,” she explained. ​“After speaking with the guardians, I found out how child sex trafficking and kidnappings are so frequent there that they don’t even report them anymore, so I knew that I could draw attention to this cause I’m passionate about.” You can catch it on MUBI after you’ve de-stressed from rewatching Uncut Gems.

​“I met Ye in Miami on New Year’s Eve and it was an instant connection,” began Fox’s self-authored account of her blossoming relationship with Kanye West for Interview, which was perhaps the boldest and most provocative way to announce a hook up in recent memory. Titled ​“Date Night”, the piece detailed how they’d met at his surprise gig in Miami and got along so well that they decided to fly to New York to watch Slave Play. Then Ye apparently directed a photoshoot for Fox in the ritzy Italian restaurant Carbone, after which he gifted her a whole new wardrobe. ​“It felt like a real Cinderella moment,” she gushed. After that, the pair were inseparable, shutting down fashion week in skin-tight leather and keeping us gossips busy.

… And the break up

​“All good things must come to an end,” said, er, lots of people over the course of history and, alas, Fox and West’s relationship did not escape fate. After days (or weeks? It was all such a blur…) of rumours, Fox confirmed that the pair had split on Instagram stories, hitting back at a Daily Mail article that claimed she was ​“tearful” after the break up. ​“I have love for him but I wasn’t w the man,” she wrote. ​“Jesus Christ, what do you guys think I am, 12 years old?” Then to top it all off, Fox claimed that she hasn’t cried ​“since 1997”, so… when she was seven. Hard as nails, our Julia.

In a later interview with The Cut, Fox went on to explain that she was actually doing us all a service by flaunting her relationship with Ye so publicly. ​“Celebrities are not that fucking important. You can tell us about your stupid fucking date,” she said. ​“We’re in a pandemic. Give people something to talk about. Do your fucking service, do your job.” Finally, someone who understands the assignment.

Moving on swiftly, Fox went on the Call Her Daddy podcast to chat… actually, we can’t remember. Anything that was said on the podcast was epicly eclipsed by a short snippet that went viral, in which Fox compares being Kanye’s muse to being Josh Safdie’s muse on Uncut Gems. But no one with a TikTok account says Uncut Gems anymore. Thanks to Fox’s insane vocal fry, which she later put down to being stoned during the interview, the new official way to pronounce the film’s title is Uncuh Jaaahms. We don’t make the rules, Julia does.

The latest viral moment that Fox has gifted us occurred at last week’s Oscars, where she let us all know that she’s working on another book. What’s it about? Wouldn’t you like to know, nosey. ​“I don’t want to give too much of it away, because I’m very superstitious so I don’t like to speak of things before they’re finished,” she told the red carpet interviewer. What we do know is that ​“it’s so far a masterpiece,” according to Fox herself. And the book’s concept is apparently ever-changing. ​“It was a memoir at first, but now it’s just like my first book, you know?” she said. New York Times bestseller incoming…