In 1910, Korea was colonised as part of Japan’s growing empire. Under Japanese rule, many Koreans lost their livelihoods and were forced to leave their homes for foreign lands; over two million Koreans moved to Japan during this period, with about 800,000 being brought over by the Japanese government as labourers. While many returned to their homeland at the end of World War Two, about 600,000 remained and became Zainichi – a stateless people who remain one of Japan’s biggest ethnic minorities.

This context serves as the vivid backdrop to Apple TV+’s Pachinko, a sweeping epic that spans from 1910 to the era of Japan’s economy boom at the end of the late ​‘80s, chronicling the dreams and desires of four generations of the same Korean family as they’re forced to leave Busan for Osaka. Based on the New York Times bestseller by Lee Min-jin, Pachinko has so far been widely praised for its rich depictions of institutionalised racism, the universal migrant experience and its portrayals of resilience and intimacy. The eight-part series has drawn near-universal critical acclaim outside of Japan (where it was met with a muted response), earning its place as one of the highest-rated television shows of 2022.

At the centre of this intricate tapestry of narratives are two characters whose illicit romance in the pre-war period has far-reaching consequences. They are Kim Sun-ja, the drama’s suffering protagonist, played as a young woman by breakout star Kim Min-ha (and, in her later life, by Oscar-winner Youn Yuh-jung of Minari). Her mysterious lover is Koh Han-su, a mysterious fish broker played by major Hallyu talent Lee Min-ho, whose questionable motives and ties to organised crime render him one of the series’ most fascinating grey characters.

With the show’s first run reaching its emotional finale this week, as Min-ho and Han-su’s journeys each arrive at a crossroads, THE FACE caught up with actors Kim and Lee to talk all things Pachinko.

Huge congratulations on the release of Pachinko – we’ve loved watching you bring Lee Min-jin’s novel to life. Did you know much about the source material before joining the project?

Lee Min-ho: I knew that the original novel was a bestseller and that it was very well-received. But what hooked me the most was that it was a story about marginalised people who did not have a voice, and how it dealt with love, solidarity and family. I thought that this was a very powerful story of the past that was still relevant to our times.

Kim Min-ha: Honestly, I didn’t know about the novel until I was involved in the audition process, but once I started [it], I couldn’t put it down. The power of each characters’ story was so strong.

Japan’s occupation of Korea is a vivid period of history, but it’s something the average person in the West might not know much about. How do you relate to this era on a personal level, in the present?

Lee: Korea has a very unique history. It’s a divided nation. We lost our sovereignty once in the past, and then we claimed it back, and then we were split in two. We literally lost our country to another country back in those days. It meant that even if we were, let’s say, participating in the Olympic Games, we couldn’t use our national flag – competitors had to use the Japanese flag instead.

I think this [showed] a lack of humanity for Korean people. And the more you learn about these events, the more you can really connect to the people in those times and feel what a heartbreaking life some of them lived.

Kim: For our generation, it’s an intimate history we feel, starting from elementary school. But it’s not only with school education – we have lots of memorial museums, events, documentaries, and a bunch of films and TV shows about this era.

My grandmother told me lots of her own memories, too. She remembered how precious white rice was. It was very rare, so when she started to eat it freely, she felt really weird. She told me at the end of our conversation: ​“Min-ha, I am so proud of you to have this role, but I am so sad that you have to be in some of these scenes, even if it’s acting.” In that one sentence, I just got the feeling that I could totally feel how she [did] during that era, how she suffered. 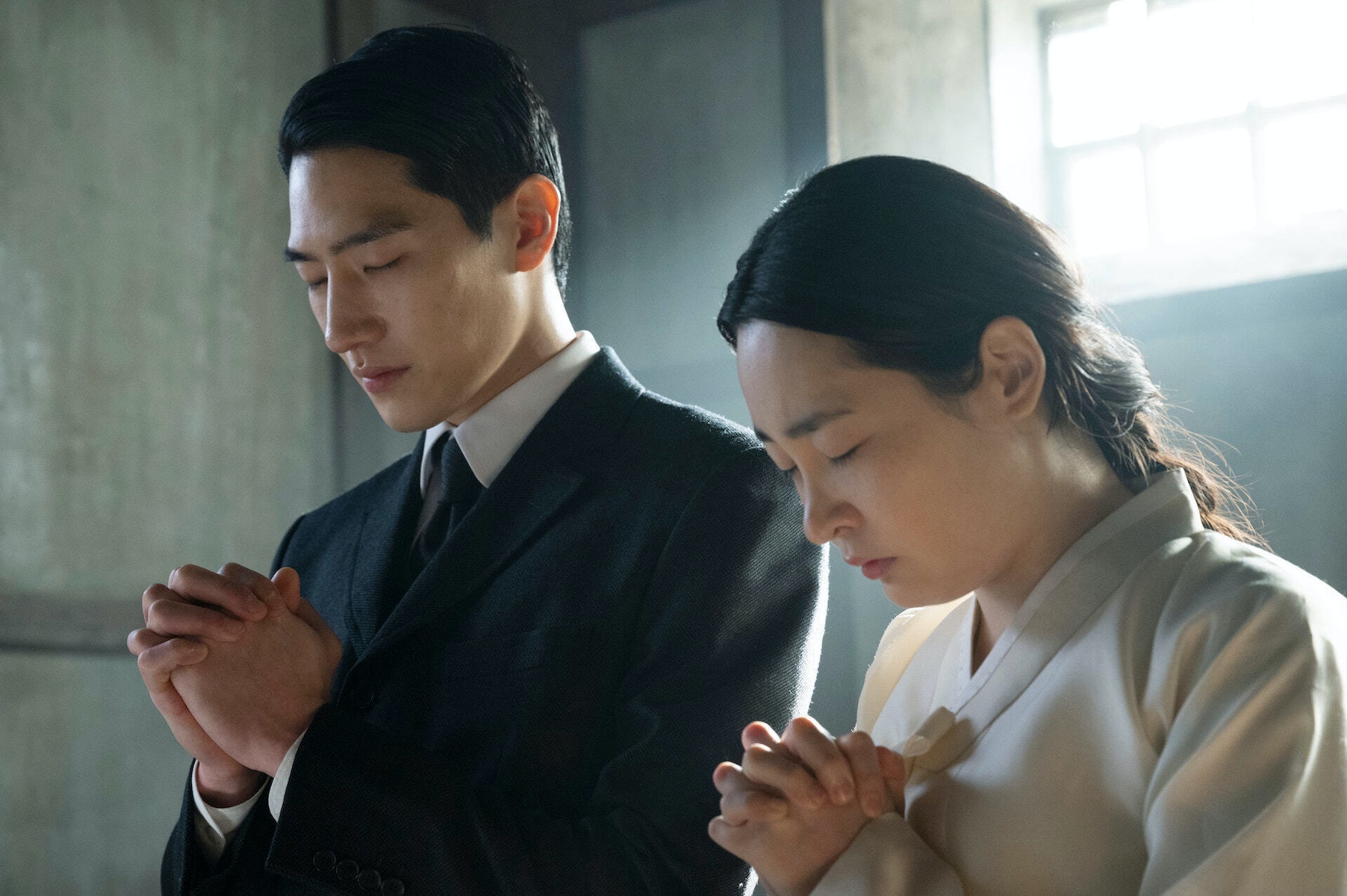 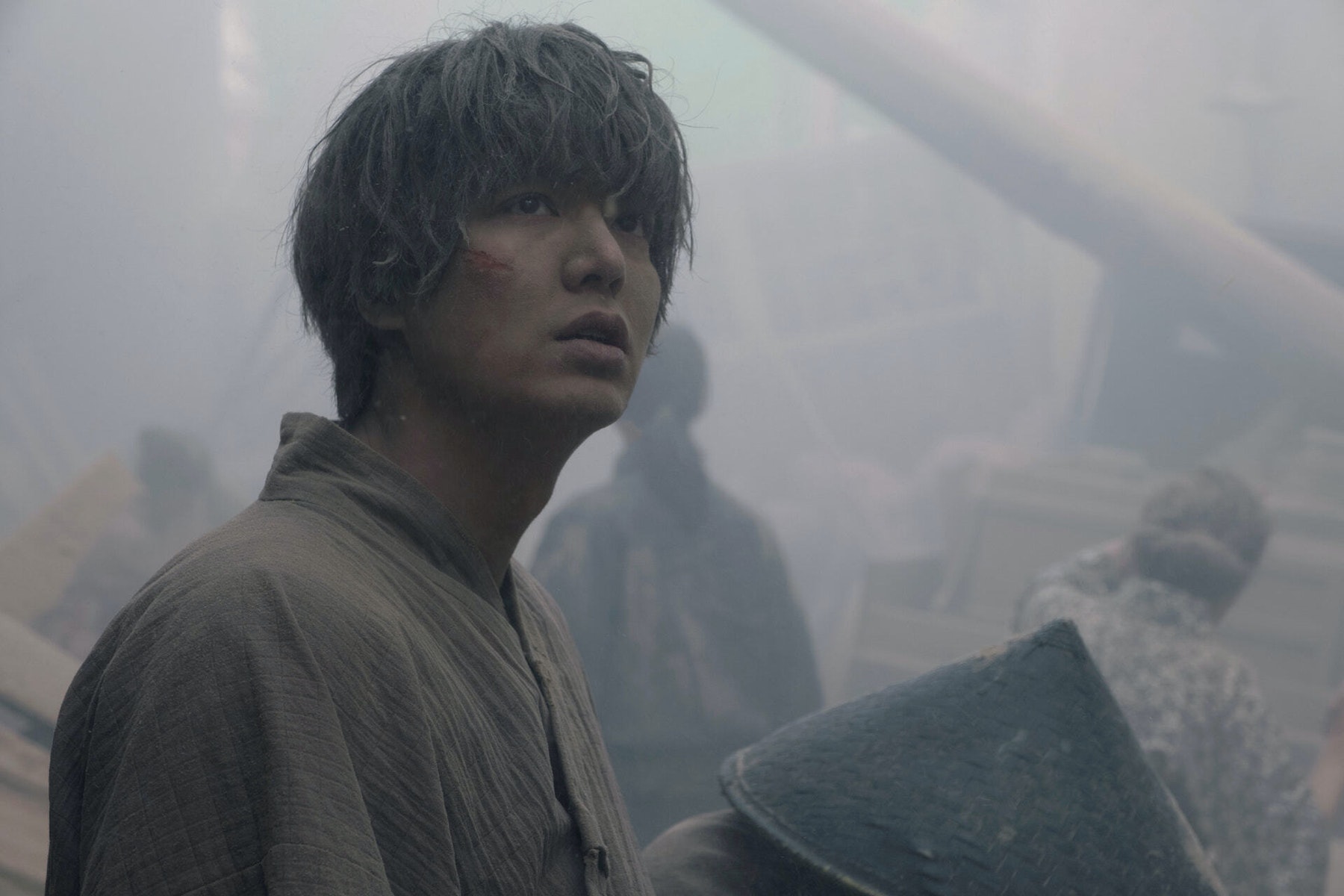 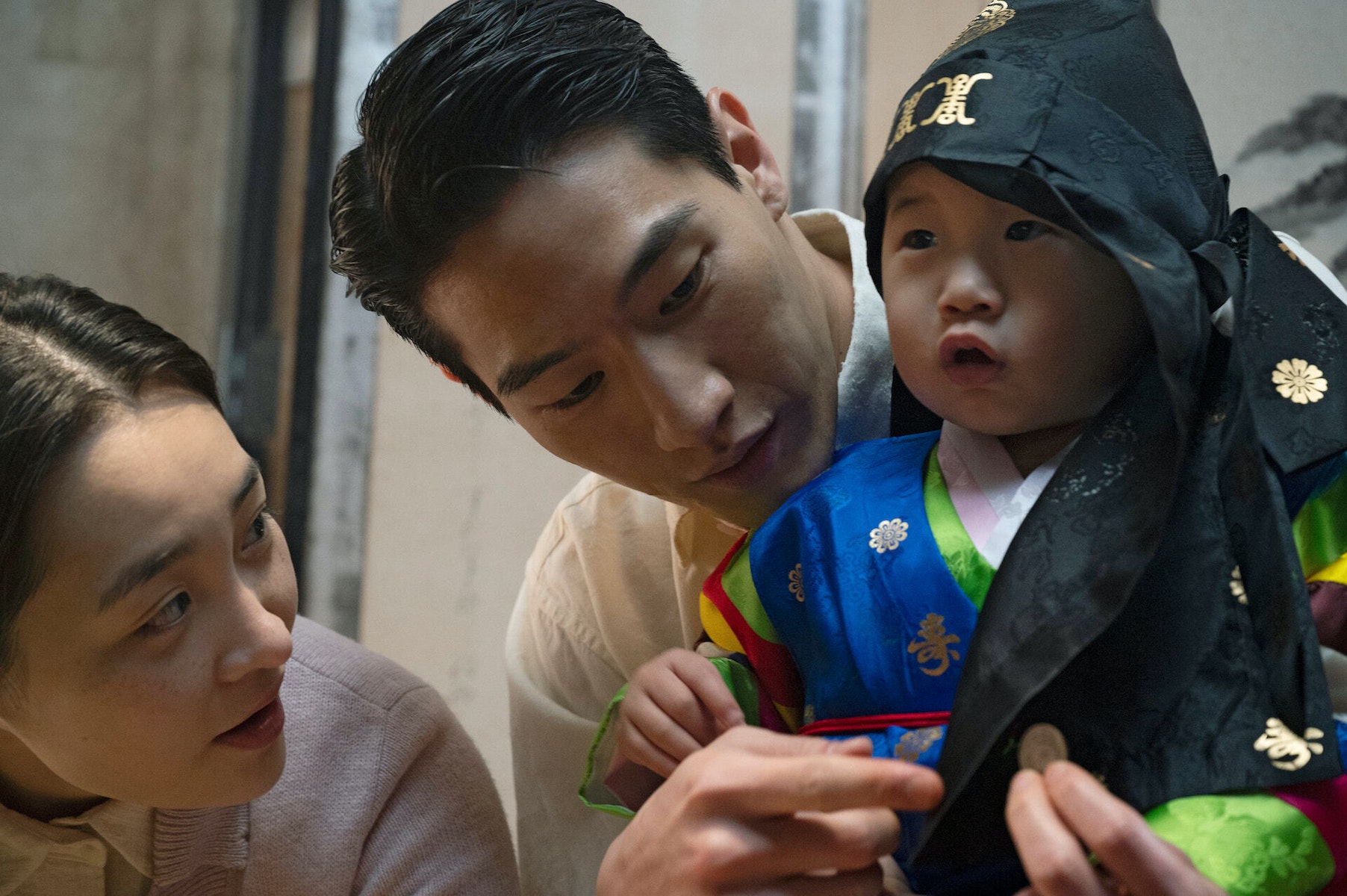 Min-ha, this was essentially your first major role – and you shared your character with Korea’s first-ever Oscar-winning actress, Youn Yuh-jung. Did you feel any pressure? How did you prepare?

Kim: I remember I felt the pressure when I first started shooting. I guess all the attention towards me was kind of scary. I mean, at that time, I had low confidence. But I overcame that pressure by believing in myself and all the people around me, so the it became a responsibility. [In the end,] all my co-stars made me feel really comfortable on set. They just let me do whatever I wanted to do and let me fly.

What about the characters you portray, Han-su and Sun-ja? What did you find interesting about them in particular?

Lee: I was very interested in the fact that the character was very closed-off, and that he had to stop himself from feeling the most basic emotions that a human being would feel. This was very intriguing, but I also felt a lot of pity and sympathy for him. Even though he was in love with Sun-ja to a great extent, he could only channel those emotions into anger and violence, which is very sad.

Kim: Sun-ja is so strong and smart. And she has so much love in herself that she was able to protect her family and herself. She is fast and flexible. She never gave up thinking. Also, she knows how to stand up even when she falls down. She gave me the power to breathe.

In many ways, the characters of Han-su and Sun-ja are opposites. One is seemingly rich and has a powerful presence about him, and the other is less fortunate, and quite timid. How are your personalities in real life similar or different to the characters you portray?

Kim: Sun-ja and me – we both have a strong depth inside. We are honest but also fragile. A lot of people see me as a weak, fragile girl… but I know deep inside me, there’s a strong will. I have my own belief, and try not to lose it despite difficult situations. I think these are really similar to Sun-ja. But I guess Sun-ja is much smarter than me, and faster.

Lee: I think what myself and Han-su have in common is that whenever I have my mind set on something I kind of reach forward without hesitating. I’m a go-getter, and in that sense we’re similar. But you know, I love peace, so I wouldn’t act out as he does in the series!

Kim: Min-ho has a lot of love and affection in him, he’s much softer, he smiles and laughs a lot. He is a very warm person rather than a cold person like Han-su!

Lee: Min-ha is really close to Sun-ja, because she is also a person with a lot of love and a kind heart. But I don’t think she’s timid – she has a very tomboyish but easygoing personality. 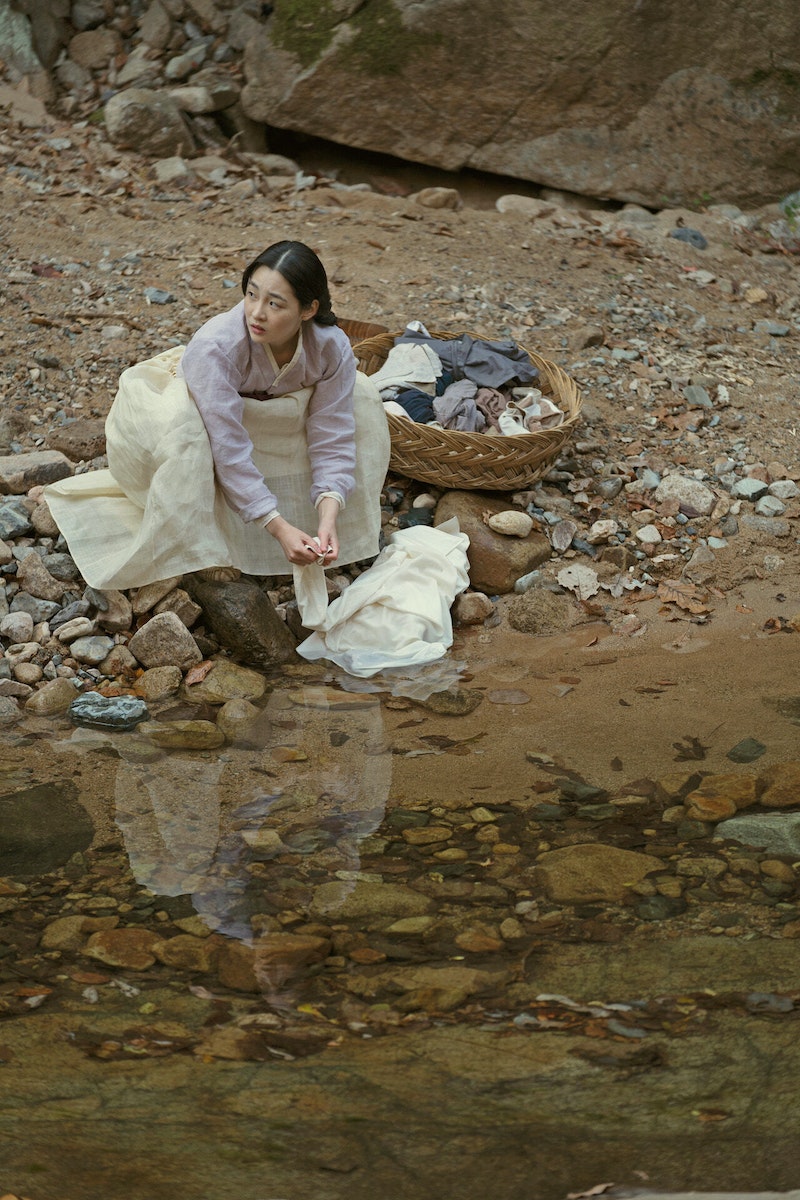 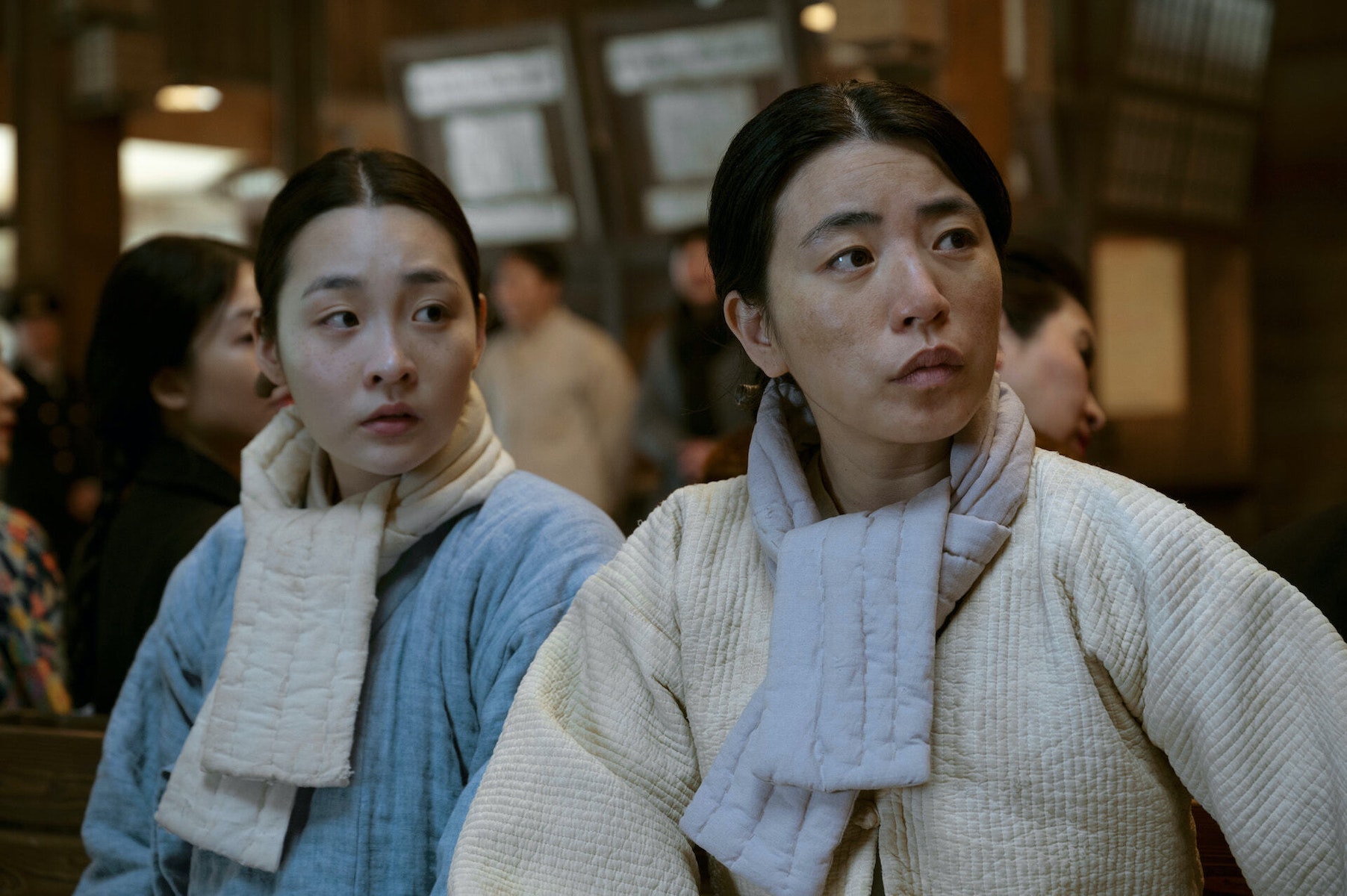 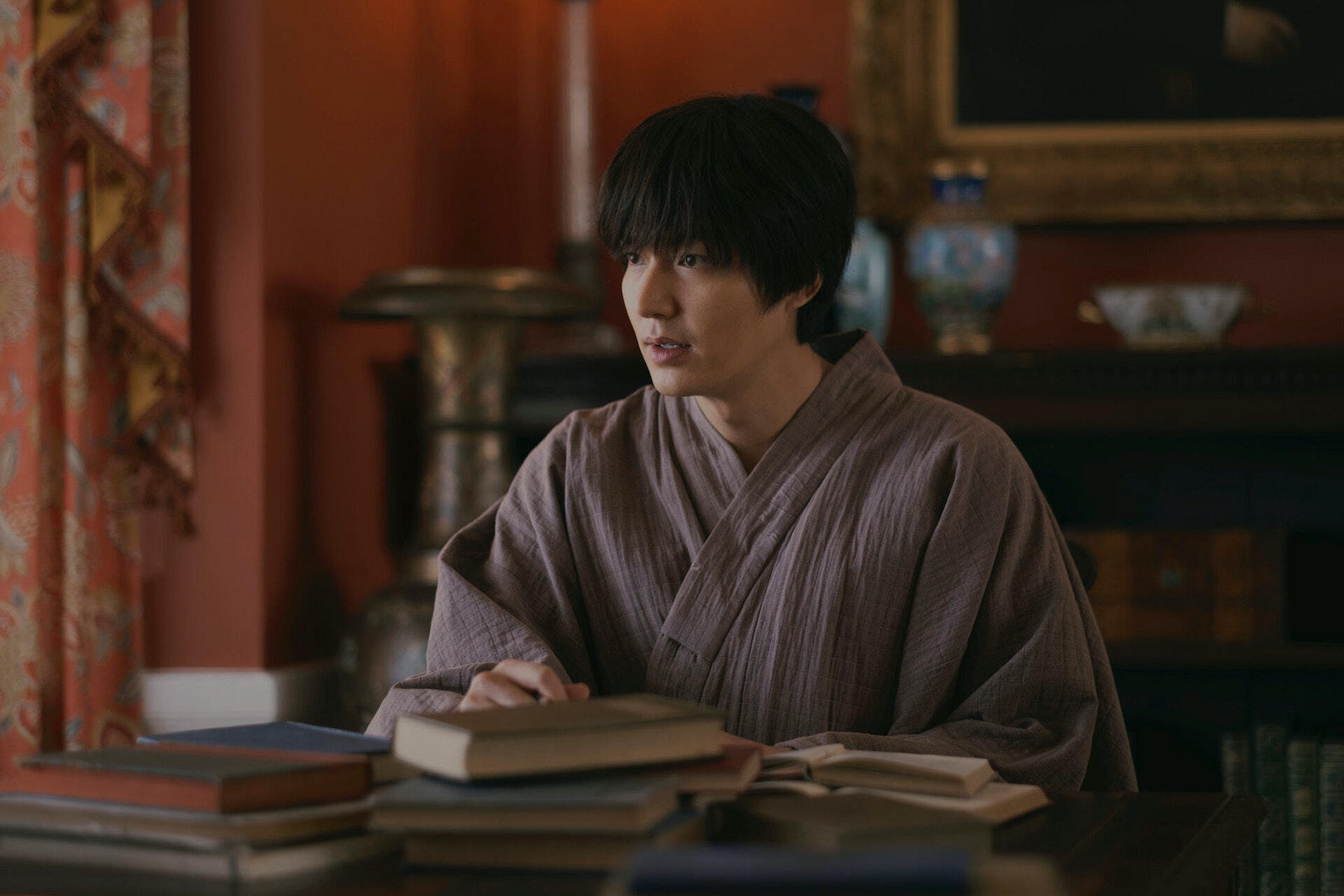 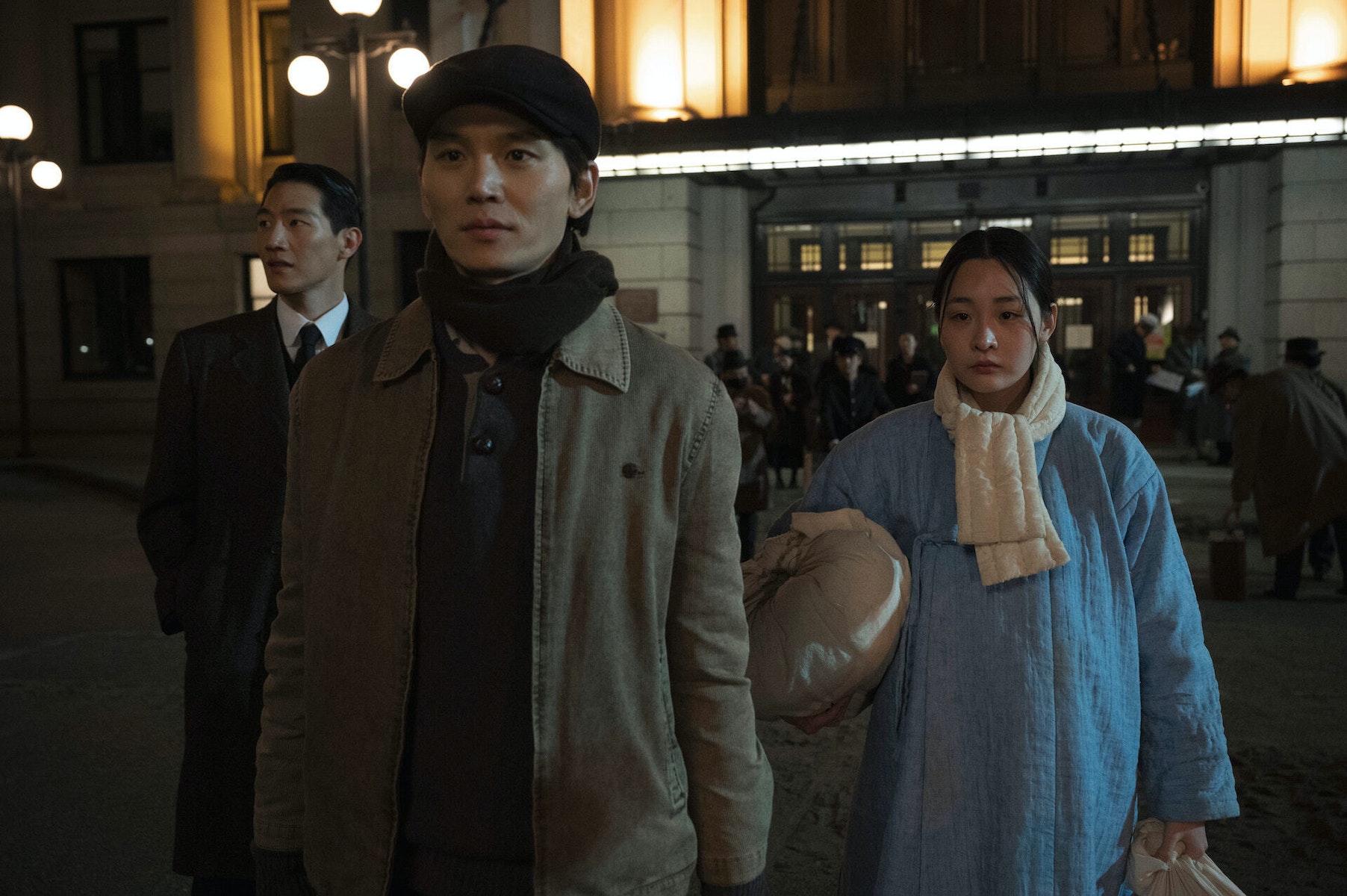 Did the pair of you enjoy working together? How did you help each other thrive in your roles?

Lee: Most of [Han-su’s] character is depicted through the dynamics between him and Sun-ja, so that was very interesting for me to portray. Both of us felt very comfortable around each other, that’s kind of the secret behind the good chemistry between us.

But whenever we went on set we had to get into character before we got there, so we couldn’t exactly have a very exciting experience because the series is a bit bleak. However, I do remember how Min-ha herself showed in her face how Sun-ja’s character is getting tougher and tougher towards the end of the series, and that left a big impression on me.

Sun-ja is a very emotionally demanding role. How did you prepare for some of those more intense scenes?

Kim: I tried to concentrate on feeling the suffering that Sun-ja was facing, feel the atmosphere, try to figure out how Sun-ja would feel and how I would feel.

For the birth scene [in Chapter Six], I watched lots of documentaries, videos of women in labour. I asked my mum and my grandmother. It was almost impossible for me to estimate how painful it is. But when I started shooting that scene, and started to scream out loud, I felt like I was really in pain and found myself trying to keep breathing. And I tried my hardest to protect the baby. It was a beautiful experience for me.

Han-su is the central subject of one of the best television episodes we’ve seen in a long while: Chapter Seven, which focuses on the Great Kantō Earthquake – which killed upwards of 100,000 people in 1923. What was your experience filming this episode?

Lee: Not many earthquakes hit the Korean peninsula, so I don’t have that much experience with going through earthquakes. But when we went on set we had a very realistic earthquake [simulation] equipment and effects, so it felt very striking and gripping even when we were rehearsing.

There’s quite an age gap between myself in real life and the younger Han-su in Chapter Seven, so I also put a lot of thought into how I could express that young, vibrant energy that this boy would have. I wanted to show how he would have had a lot of hopes and dreams, and how innocent he was.

Any parting thoughts before the final episode premieres this week?

Lee: I hope you loved the show, and I hope everyone will stay with us until the end. I’m very humbled and thankful that it’s been so well received all over the world!

Kim: I just want to say a few last words – I would love people to feel that they are not alone while watching Pachinko. We are surviving in this massive world, and it’s hard. It is sometimes so hard that you want to hold your breath. But just keep in mind that you are not alone.

Look around you. Even though there are moments when there is only darkness, there is love, even if it’s far, far away, love always exists. I would love people to remember this while they are watching our show. And that they are doing great. Thank you so much!

Pachinko is available now to stream in full on Apple TV+