Sick Love, a project that began as a zine, was born out of frustration. Its founder, Izzy Gorman-Buckley, grew tired at the often soulless and ignorant portrayal of young, queer creators – some of those being her friends. Now a multi-platform project, Sick Love publishes zines, hosts interviews with emerging musicians on YouTube and puts out how-tos on DIY publishing.

Its ethos is not only to champion emerging artists like those included in the latest issue (more on that later), but to challenge issues that affect those in its communities, like working class visibility, trans rights and female empowerment through art. Sick Love​’s previous print project, 10 ZINE, was a publication introducing London’s big talent both in art and activism like Ellie Pennick, founder of Guts Gallery, trans rights activist Lucia Blayke and Seren Metcalfe, founder of the Working Class Creatives Database.

Now, Sick Love takes its focus away from the capital and onto Glasgow, Kyiv, Warsaw and Leipzig, looking at the subversive underground cultures of the four cities. ​“Each city has an industrial past and an innovative contemporary art scene that isn’t afraid to challenge,” says Gorman-Buckley. ​“They were all places of great interest to me which I was yet to have any real grasp on. I was interested to learn more about these communities, as well as the similarities and differences each location would reveal.”

Featuring artists like painter Agata Slowak from Warsaw, photographer Leonie Janssen from Leipzig and sculpturist Sasha Kurmaz from Kyiv, the artists selected were based on Gorman-Buckley’s hope to ​“uncover the versatility and vibrance of each location and its youth culture,” she says. ​“I hope to build on a long history of print with a purpose through my zines.”

Over in Glasgow, we speak to artists Trackie McLeod, SHREK666 and CORE magazine’s founder Beth Henderson on their city, works and lives for the latest issue of Sick Love, where all profits from the Kyiv issue will be donated to Ukranian LGBTQ+ and feminist NGO Insight.

How did Glasgow shape you as a human and as an artist?

As an artist – the people and the patter, mixed with its rich culture, has made for a constant source of inspiration. As a human, it’s shaped me to be able to wear a kilt to get the morning paper while shouting ​“freedom!” at any given opportunity. Thanks, William Wallace.

Is there a good community spirit for artists?

Like being a creative in any small city, to make any moves, it involves a lot of determination, otherwise you’re pissing in the wind. There’s a strong sense of support and community in Glasgow for the arts, and we’re not short on venues. But I hope for the future [that] there can be more accessible funding for underrepresented voices.

You often pair photos of football fans and cultural moments of lad culture with renaissance paintings. They are both religious in a sense. What’s the inspiration behind these works?

I was inspired by a photo taken by Joel Goodman in Manchester on New Year’s Eve in 2015. It shows a man flat out on the road nursing a pint surrounded by coppers wrestling and drunk onlookers. Compositionally it’s amazing, and looks just like a modern classic.

For me, people aimlessly follow football like people follow religion – it’s the need to believe in something. So, when I collaged piss-soaked drunk tank football fans with delicate renaissance iconography, it created that contrast of the then and now, two worlds that on the surface don’t collide but compositionally they tell a funny story. 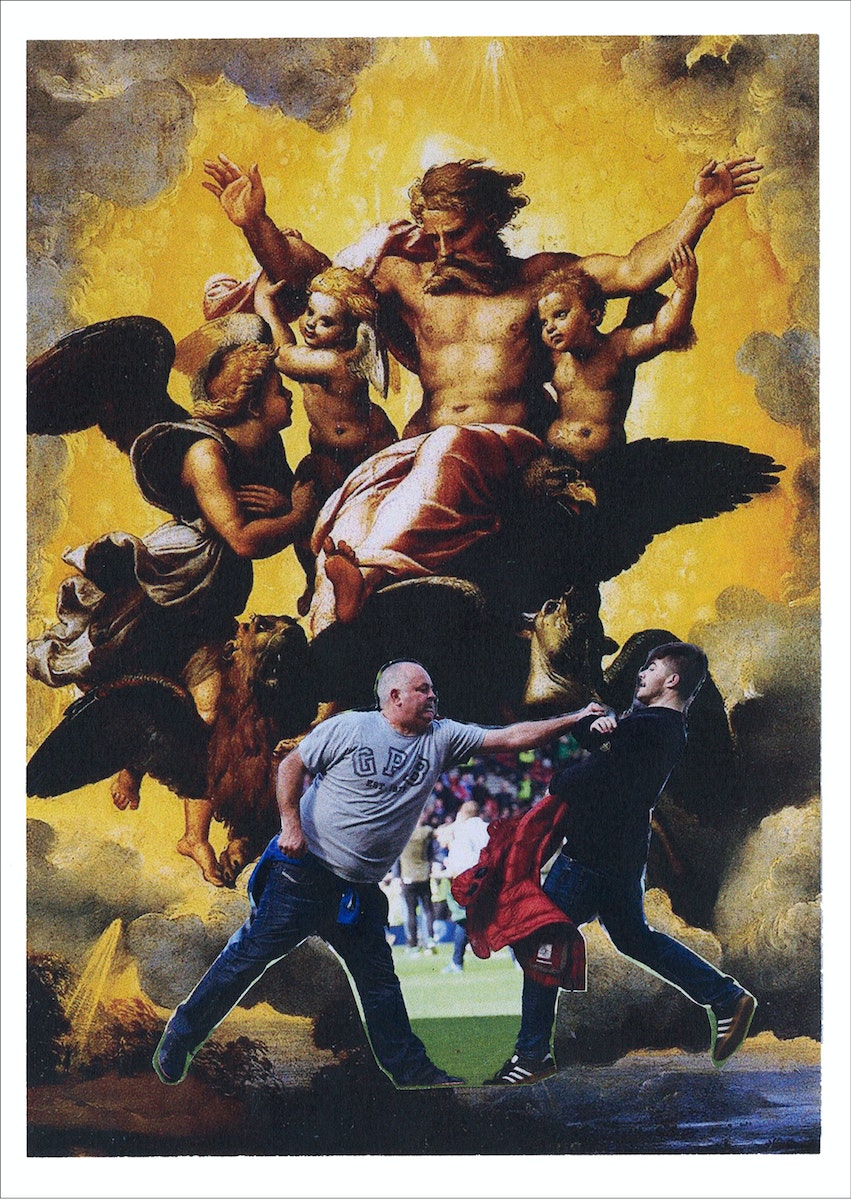 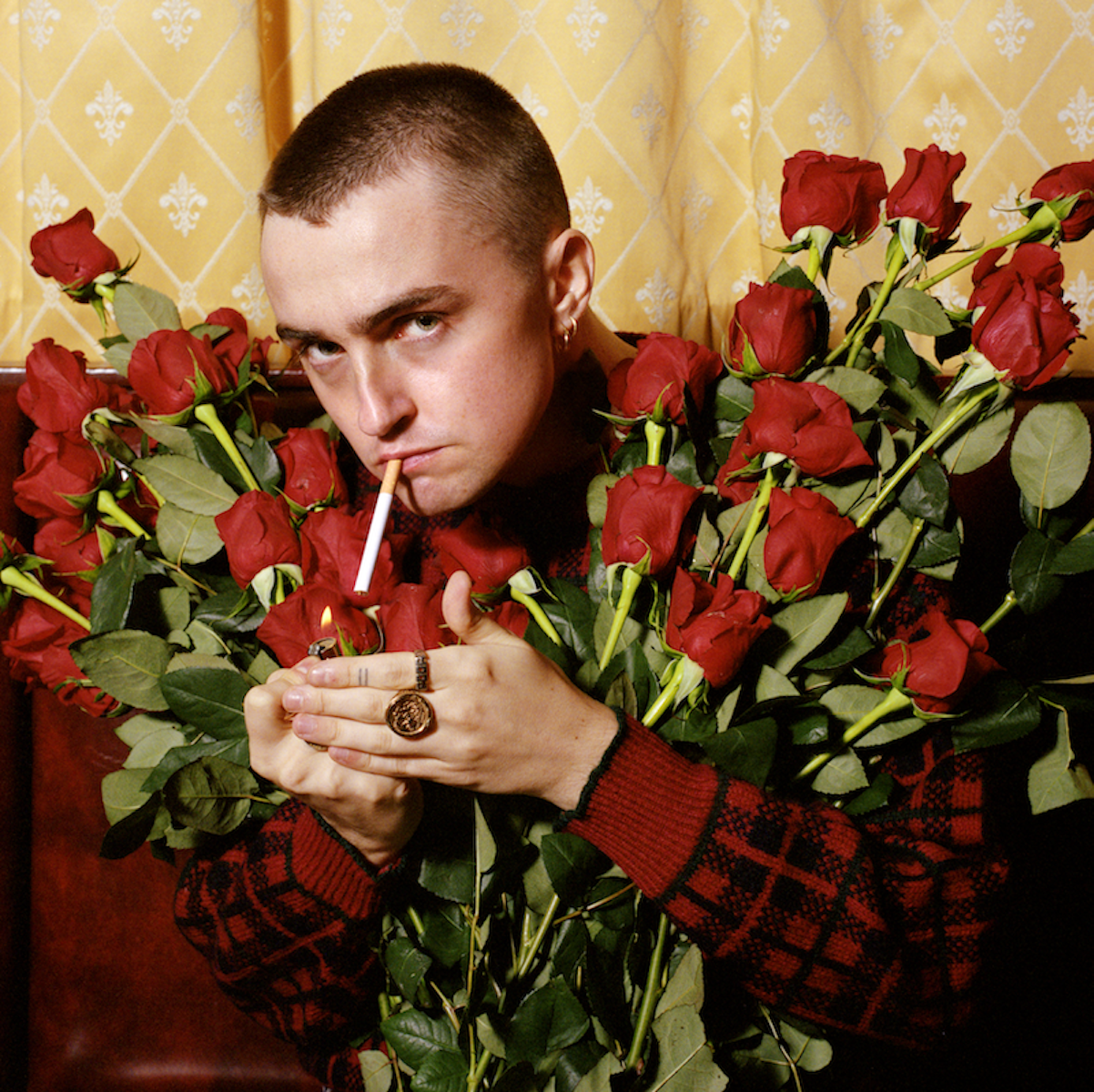 Your work is inspired by landscapes, Celtic mythology and fairytales…

I work more now on building complete environments, whether that’s through performance installation or 360 video/​VR, building a place-world-system-state of being that’s ungoverned.”

How would you describe the Glasgow queer scene?

The Glasgow queer scene feels small. We have a community, but could do with supporting each other more.

How was SHREK666 born? In an interview for BBC Scotland, you say that ​“monstrosity is a human construction of fear”. Does creating and performing as a different persona help you face your fears?

I made SHREK666 as a way to combine visual art, performance, SFX, sculpture and fashion. I have lived and been perceived as multiple identities in only 25 years. There is not a lot that scares me and I know my limits from confronting them head-on. The monsters we see most frequently working in nightlife are the cis men who won’t accept ​“no”. While I perform as a monster in club environments, it’s for entertainment.

I hope to be a figure of safety for any night I’m involved with.

Why did you start CORE?

In this endless loop of trend cycles, artists work and vision, it soon becomes a viral TikTok aesthetic or fades away. I wanted to show legitimacy in what we share online and our feelings and mood reflected on social media.

CORE includes many talented and underrated artists from Glasgow, however CORE itself was sold and publicised on the internet. It resonated with people around the world. Living in Glasgow, I often look inwards because of the lack of opportunities, existing in a world of my own.

CORE​’s Instagram account is a mixed bag of internet culture, fashion, fetishes and more. What connects these images?

CORE is made to capture a feeling and mood by putting out an idea and inviting others to submit work if they have been feeling similarly. CORE Issue 2 centres around intimacy, desire and attachment, the glimmers of connection between moments of deviancy, vulnerability and desire. I’m looking for submissions that represent how you experience intimacy – [anything from] longing, voyeurism, platonic bonds, online interactions, sex work, emotional attachment, loneliness…

How do you go about picking artists?

CORE accepts screenshots, all printable visual art, poetry and words, anecdotes, unfinished work, iPhone photographs, fashion work. In this age of too many images and access to all, I like to embrace eclecticism and embrace the multitude of imagery we view everyday. Curating the magazine was an intuitive process, searching for automatic emotional response.

How would you describe the rural Scottish landscape you grew up in? How did it shape you as a human and as an artist?

I was already living in the city of Glasgow, but found my creative urges kept pulling me back to the places and landscapes I’d grown up in, and I began to unpick the reasons for being drawn to particular people and histories. We innately absorb our surroundings when we are growing up, and so much of my work is about me trying to visually interpret and mythologise the things that attract me in a way that I’d find impossible to articulate verbally.

I was also really lucky in that many of my friends and their families were creative in various ways and this, combined with rural living without easy access to ready-made fun, forced us to make things happen for our own entertainment. This included things like building large sculptural bonfires, decorating remote village halls for parties, and helping friends set up sound systems deep in the woods. I think this taught me to act on those seeds of ideas and to look for beauty and opportunities in what surrounds me.

How do you create an environment as a photographer that is comfortable for the people you capture?

Whenever I am photographing people, I think of it as a collaboration. Wherever possible, I get to know them or do some research on the person beforehand. I try to figure out a way that their nature could meet my own, to create a photo that feels compelling and true for both of us. There is always a shift in power when you bring out a camera, so I try to work in a mindset that the subject comes first and the image comes second.

My ideal way of making images is to find an everyday space, such as someone’s backyard or their bedroom, with personal objects lying around and posters on their wall, and then figure out what story I want to tell, and how I can show someone living and breathing inside it.