As radical or novel as it may sound, this is an argument that has circulated internationally among activists and community groups for years.

British organisations such as NetPol and Northern Police Monitoring Project (to name just two) have long been fighting to build community resistance against police violence, harassment and racism. Debate around defunding the police, however, has only recently started to infiltrate mainstream discourse.

A global pandemic, George Floyd’s murder at the hands of Minneapolis police and Black Lives Matter protests happening around the world have brought into sharp focus the racism and injustice at the heart of a system that many of us have been conditioned to rely on for help.

As is explained by Dr. Adam Elliott-Cooper in this video, defunding the police is fundamentally about learning new ways of solving social problems and finding accessible alternatives to law enforcement and prisons.

This means diverting funds away from police departments and into public health services such as mental health provision, council housing and education – preventative measures that could result in less crime, and ultimately, less harm.

Over time, ​“Call the police!” has become an umbrella term for ​“Get help!”, where incidents involving rough sleepers, mental health episodes or domestic violence could be much better dealt with by specialised (and adequately funded) community based groups.

So what can you do instead of calling the police?

Filthbusters, a new zine and collective, seeks to educate and empower people in finding viable alternatives to doing so. It’s a brilliant, meticulously researched and comprehensive resource that includes advice on how to de-escalate potentially dangerous situations, with links to specific organisations that can help.

The project came to life at The Common House in Bethnal Green, a London-based space where community initiatives, activist groups and cultural projects come together and where conversations around radical politics can take place. It was put together by friends who are all involved in mental aid work in their own communities, and who envision a future that is free from the oppressive structures of law enforcement.

Olivia*, one of the founding members of Filthbusters, spoke to The Face about optimism in a time of unprecedented adversity, the power of radical thinking, and creating a resource that could save lives. 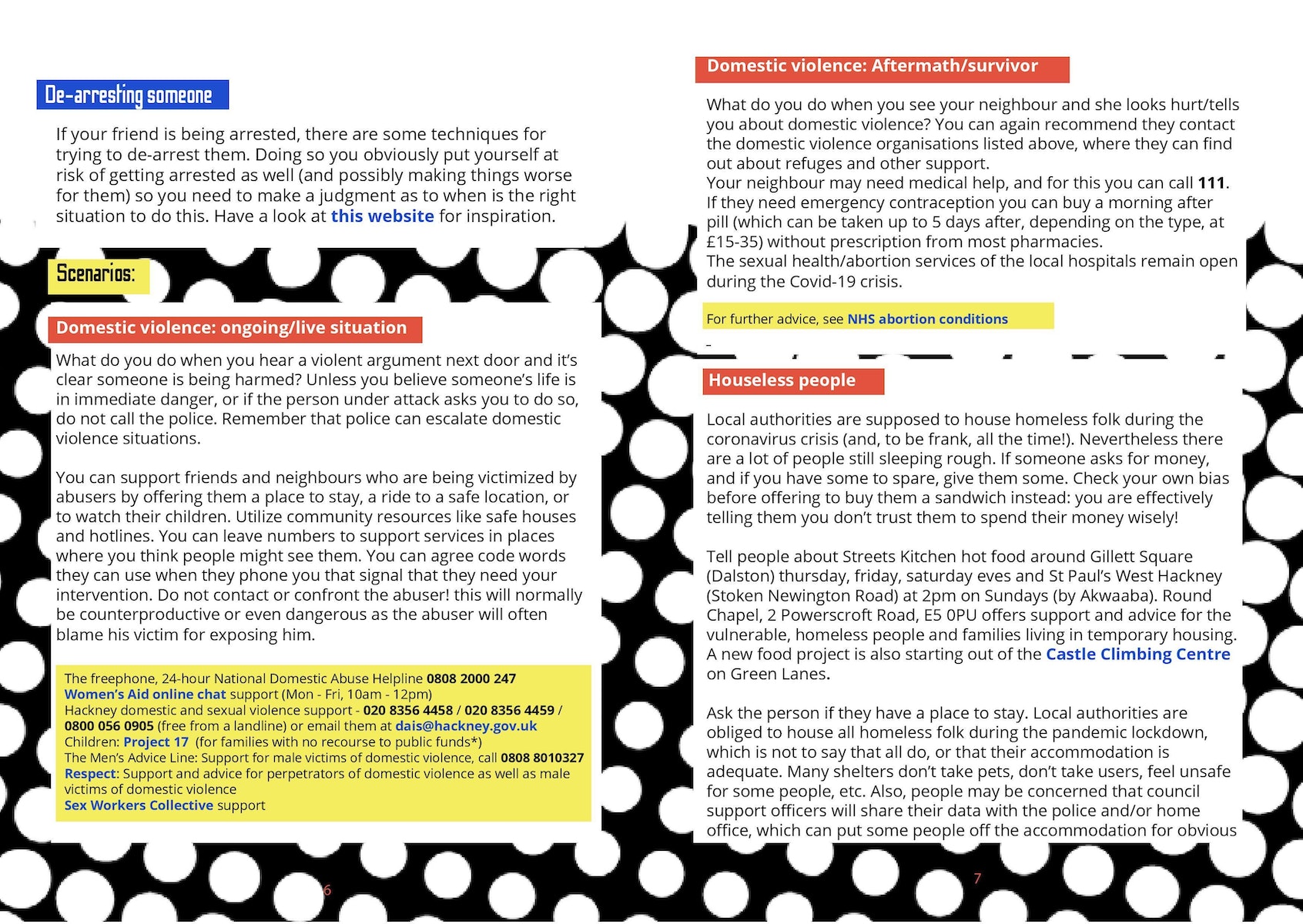 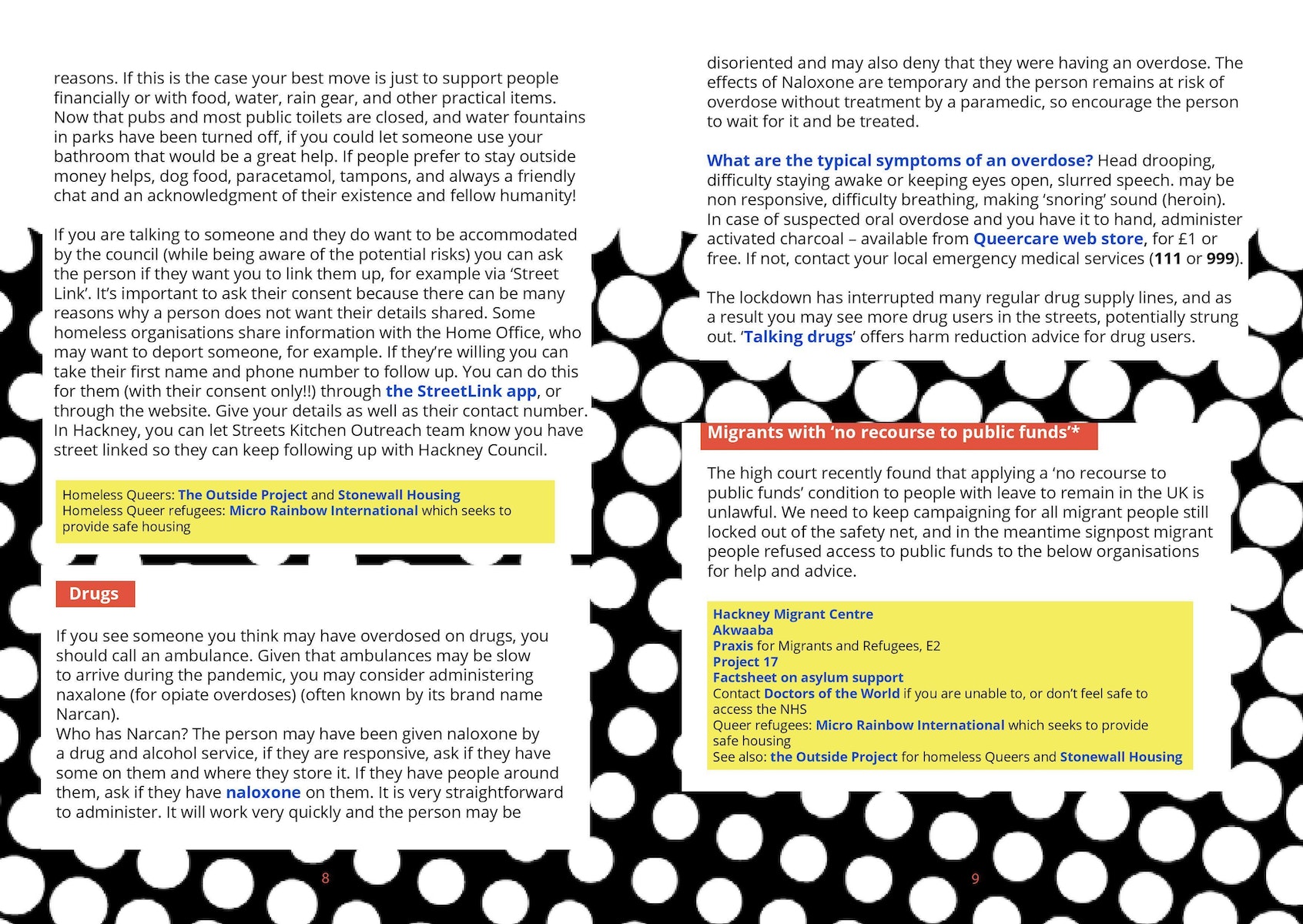 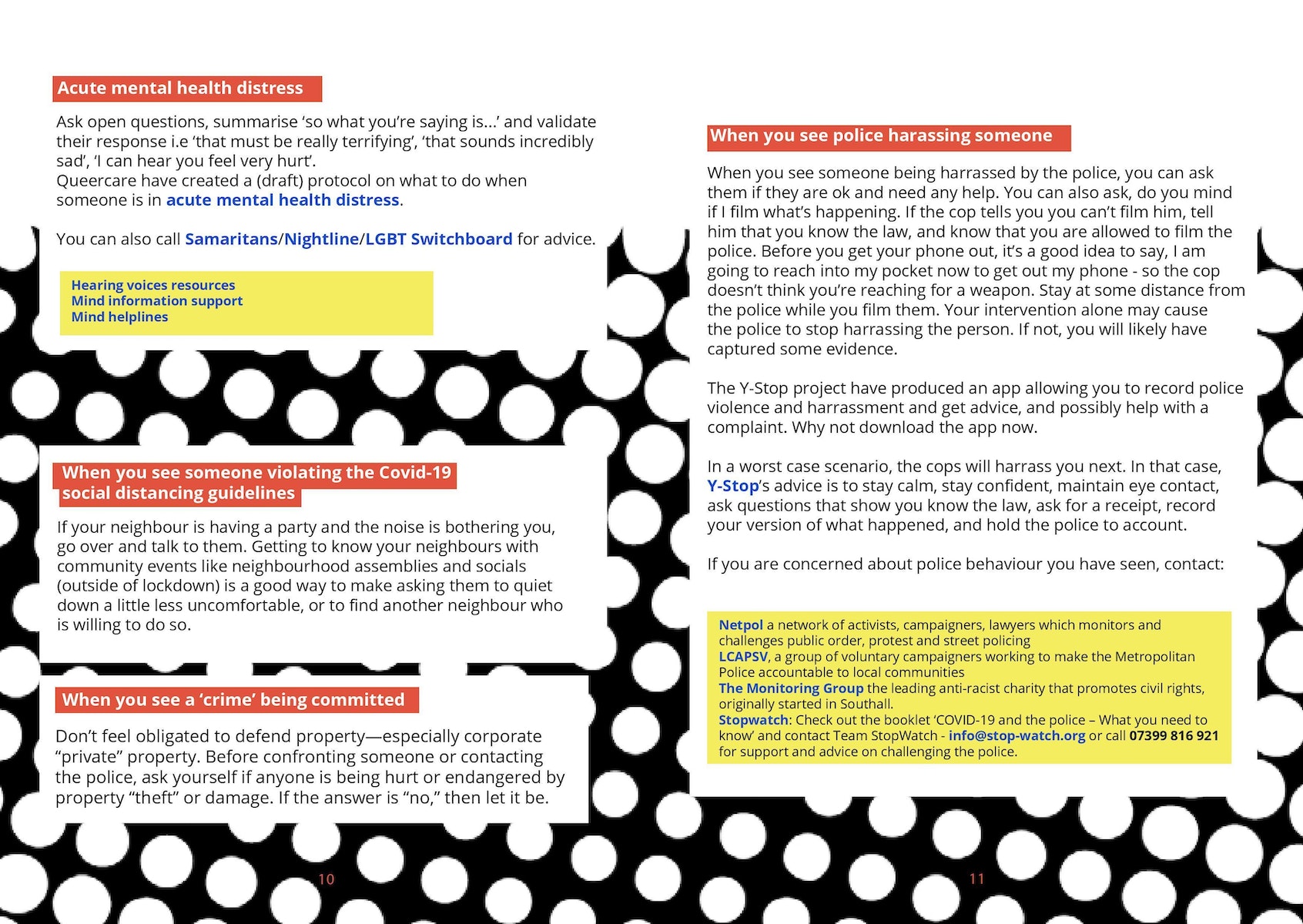 What prompted you to make Filthbusters?

It started from looking at conversations that were happening in mutual aid [coronavirus] WhatsApp groups. We noticed that people were policing each other’s behaviour – some messages in these groups were saying, ​“This happened, call the police. These people should be arrested for gathering or going for a second jog.” As people who come from an abolitionist point of view, we could see that when the police turn up, it often doesn’t make the situation better. It can put people at risk of harm, especially in inner city London.

In spite of that, more and more people are saying, ​“If we didn’t have police, how would we deal with things that people otherwise call the police for?” That was really what the zine was all about. The scenarios describaqA‘ed in the zine are all real, they really happened. It got us thinking: Okay, how can we adjust to those situations differently?

Obviously we realise that there are obstacles to doing so, because people don’t feel confident or supported in opposing law enforcement. We thought that putting out a zine would get people to think through certain scenarios, so that they would feel more empowered to act.

How did you come to hold these abolitionist beliefs?

I think they mainly came from reading the work of Angela Davis, my hero. She has written about it in a way that makes it seem realisable, that one day we could have a world without prisons and police. Then there’s Ruth Wilson Gilmore, whose work has been massively inspiring. It’s a debate that’s really picking up.

What does a future without police in the UK look like to you?

It would look like a society that takes responsibility for its relationships and its communities – a society where we connect with each other much more than we do now. There’s a lot of work to be done, we’re still in the early stages of thinking about what that would look like.

There’s a book by D. Hunter called Tracksuits, Traumas and Class Traitors. He’s a working class author from Nottingham who writes about how marginalised people practice abolition in their daily lives. It’s really excellent – Hunter writes about his own experience as a young person growing up in a very difficult environment, about drugs and sex work and developing structures of support that he could rely on. The regular middle class public doesn’t have those kinds of networks. We need to broaden the politics of care amongst each other.

How would you introduce someone to the concept of defunding the police?

I would tell them that we have the power within us to make society better. We’ve seen that the government isn’t to be trusted with caring for people, they seem to care more about the economy than protecting our lives and our health. What we’ve also seen, with the springing up of these mutual aid networks, is that people can do it for themselves. Look at Grenfell. It took ages for the government and local authorities to start providing for people, it took several days for them to get anything organised. But people were immediately there. They look out for each other much better than the state can.

Are there any organisations that you would recommend people get in contact with if they can’t wrap their heads around defunding the police?

There are so many incredible organisations to learn from, like Cradle, a Black and POC oriented group that seeks to put alternative structures in place to organise society, especially in terms of abolishing prisons and police and so on.

We can also look across the pond, to the work of people like Mariame Kaba who runs a transformative justice project called Transform Harm. The Audre Lorde project in New York City has a branch called Safe Outside the System, where undocumented migrants or sex workers who can’t call the police for obvious reasons, have figured out processes and support groups to call upon when they otherwise would have. We can learn so much from them, and I think the way forwards for Filthbusters is to work closely with such groups.

What has the response to Filthbusters been like so far?

It’s been great! We’ve tailored it specifically to Hackney in London, so it includes the names and contact details of organisations there, but people have taken our template and created resources for places like Newcastle and Bristol, which is amazing.

Would you say that this is the first time that a future without police seems achievable?

To me it has always seemed achievable, because I’m a fierce optimist. It’s all about getting the knowledge and skills in place to make it happen – it’s about connecting and creating a willingness and desire. I think it’s a combination of all of these things, and of course people have to believe that it’s possible. They have to be able to imagine what this would look like and then find that an attractive vision. Then it’s about connecting with people and networking with radical groups that are seeking to build a new infrastructure. All of these groups have to grow, find material resources and time to do their work – and all of us together are going to need to play a role in that.