Satan. The arbiter of evil. The original bad boy. He’s had a tough time being understood, hasn’t he?

From pop culture references such as The Exorcist (1976), The Craft (1996) and, um, The Bible, right through to media hysteria surrounding heavy rockers Black Sabbath and Marilyn Manson, Satan has managed to terrify parents and lure teens to the dark side since the heady days of the Garden of Eden.

But while our obsession with evil doesn’t appear to falter (see the last US election), it appears that Old Nick has found a home in something far less menacing than the half-man, half-goat we’ve grown accustomed to…

Directed by Penny Lane, a new documentary, Hail Satan?, follows the efforts of The Satanic Temple and their mission to separate church and state in the US.

A new religion, The Satanic Temple was founded by Lucien Greaves (who goes by a false name) and Malcolm Jarry during their time at Harvard in 2013. Best described as a politically active religious group, the Temple fights against what it perceives as Judeo-Christian values infiltrating western laws – something its members argue benefit only the conservative Christian right.

“Satanism is meant to reject all moral decency as dictated by Western culture by Judeo-Christian values,” Greaves says. ​“They’re the arbiters of what is good. You can’t really doubt any part of that or you’re on the side of Satan.”

Filmmaker Lane, who is now a fully-fledged member of the Temple, was compelled to document the group having come of age during the polarising ​“satanic panic” of the ​’80s and ​’90s. It was during this period – when mass hysteria erupted around so-called cults operating on the fringes of society – that Greaves got his first introduction to Satan, too.

“Mainstream media took conspiracy theories that Satanic cults were secretly engaging in cannibalism and infant sacrifice seriously,” Greaves says. ​“I was a child then and these kinds of claims were coming from authoritative sources, so I naturally thought they were true.

“It came to be that none of it was true at all.”

When The Face sat down with Greaves to discuss the film, the conversation revolved heavily around debunking these myths. ​“It doesn’t matter if they’re atheists or Christians,” he told us. ​“They don’t seem to understand how something could be metaphorical to us, but also religiously meaningful.”

For followers of the Temple, Satan is metaphorical. They don’t worship a figure, and reject any theistic ideas unless backed by cold, hard facts. It’s something Greaves describes as ​“the future of religion”.

“Question supernatural assumptions, demand evidence for everything and demand equal liberties for all points of view,” he says. ​“That very much runs counter to Judeo-Christian history.”

But if their religion isn’t based on a bearded man floating in the sky, what is the difference between members of The Satanic Temple and atheists? Both reject non-theistic ideas, both believe in a separation of religion and state. But the former chose a provocative image as their mascot.

Perhaps the difference is that members of the Temple are more willing to accept the beliefs of other religions – so long as it doesn’t infiltrate into the lives of everyone else?

“That’s the irony of The Satanic Temple,” Greaves agrees. ​“We’re very openly non-theistic, yet people think there’s something fundamentally dishonest about us. I think we’re probably the most honest religious voice present now.”

And Hail Satan? makes this notion very clear. The Temple isn’t out to eradicate religion, but rather hold a mirror up to society. For religious members to question their motives. There’s a lot at stake and they’re ruffling a lot of feathers – especially in America, where many God-abiding citizens still fear the wrath of the Red Horned One.

“There’s still a puritanical undertone in the United States where violent rhetoric and violent scenes on our television are not seen as offensive at all, but you show a breast and all hell breaks loose,” Greaves says. ​“It’s a really weird backward culture.”

This ​“weird backward culture” was put to the test when the Temple attempted to erect a huge bronze statue of Baphomet (essentially a Satanic goat) next to the Ten Commandments statue in Arkansas last year. There was – rather unsurprisingly – significant uproar, as the film depicts. But when the statue was unveiled, members and free-speech activists alike cheered in glory. One to The Temple, Nil to the US Christian right. 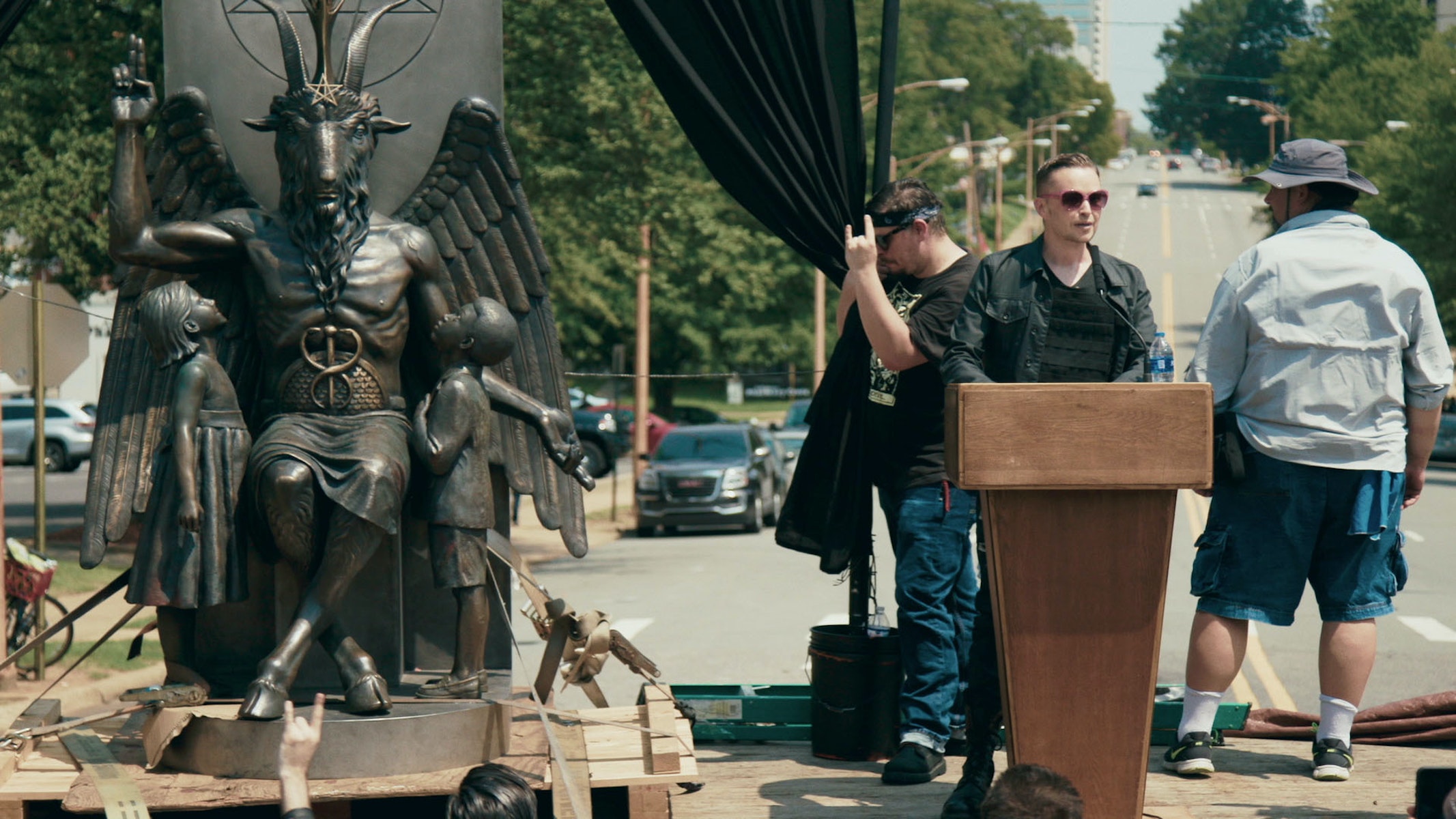 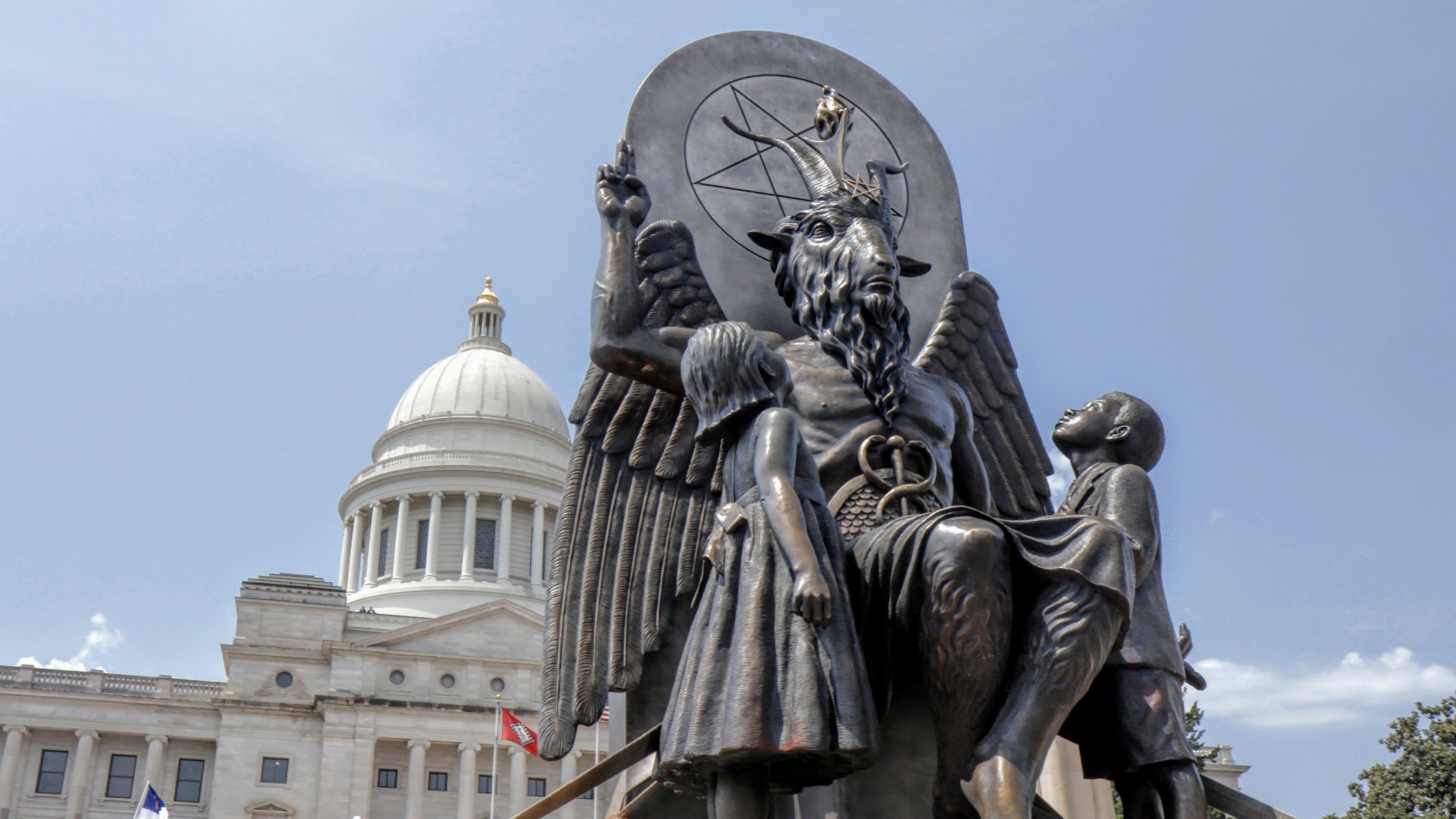 “The state made the argument that we don’t deserve to have our monument on public grounds because they were arguing that we’re merely satirical, not a real religion and beneath the dignity of the court,” Greaves describes. ​“They said our monument didn’t deserve to go out because it’s not religious, but they need to scrap that entire argument now because just last month we announced that the IRS has recognised us as a legitimate religion.”

Hooray. Because, ultimately, Greaves and co are out to do good. Whether it’s through offering Muslims refuge after the 2015 terrorist attacks, the Temple’s Menstruatin’ with Satan campaign, which aims to make menstruation products more readily available, or its stance on LGBT rights in the United States – the followers of Satan are out to tackle conservative America with full force, and just a hint of prankster.

“Satanism just isn’t for everybody,” Greaves says. ​“It doesn’t have to be.”

Hail Satan? premieres in the UK on 23rd August