Perhaps it was the location of Gucci’s latest show, the 13th century Castel del Monte (or Castle of the Mountain) in Andria, Italy, but there was an oddly supernatural sensation that hung in the air. Watching the sun set over the mountain, where the castle sits on its own at the top, surrounded by nothing but hilly green, set the scene for pure magic.

For last night’s Gucci Cosmogonie show, Alessandro Michele sky-rocketed his pursuit of shimmering stardom for the follow-up collection to November’s Love Parade, where Gucci & co. took over the entirety of Hollywood’s Walk of Fame – a constellation of stars in its own right. But this season, Michele looked upwards for a show rooted in cosmology, with the Italian house even ​“adopting a star” and registering it under their name in the lead-up to the show.

For inspiration, Michele looked into the life of Walter Benjamin, the German writer and philosopher whose early work combined elements of romanticism, Western Marxism and Jewish mysticism, and Hannah Arendt, the German political theorist and fellow philosopher. Michele was enamoured by the former’s lasting impact and work within philosophical history: ​“If any thinker was able to keep things that were so distant in time and space, re-articulating them into bursting collections, it was Walter Benjamin,” Michele wrote in the show notes. ​“To this man, who couldn’t survive without his quotations, my gratitude.” 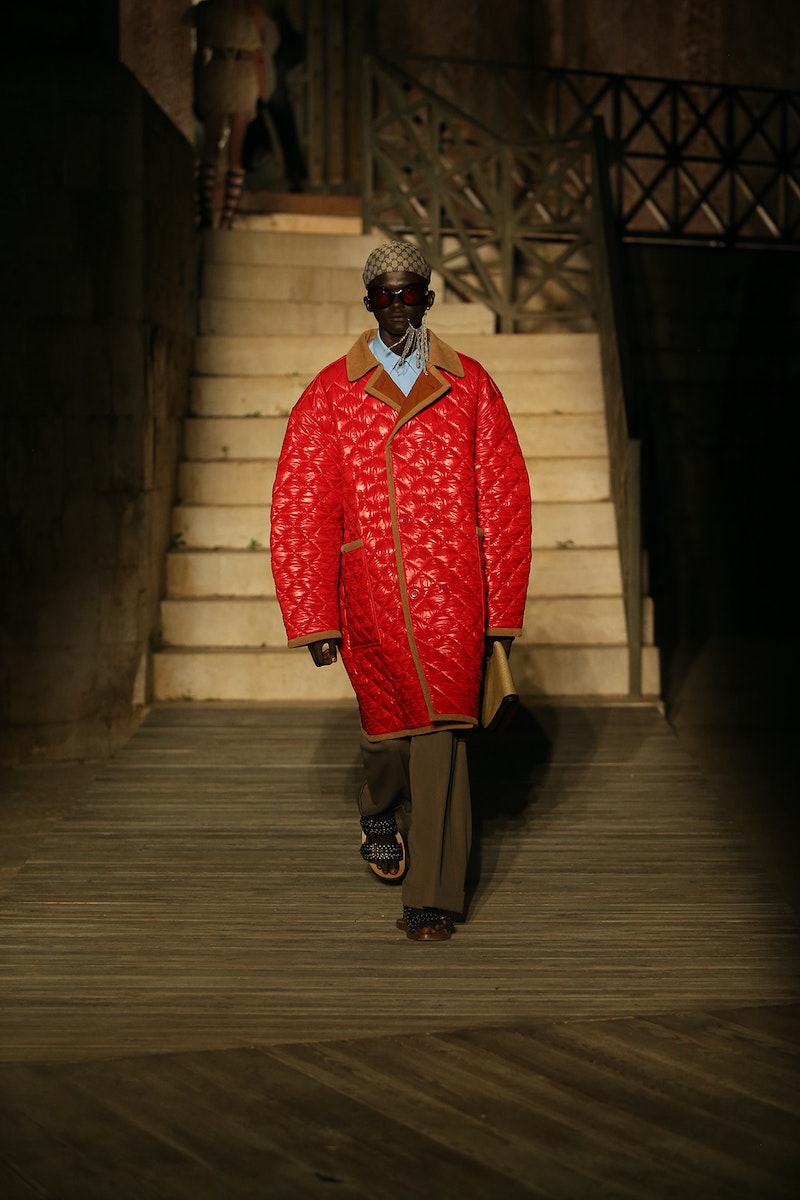 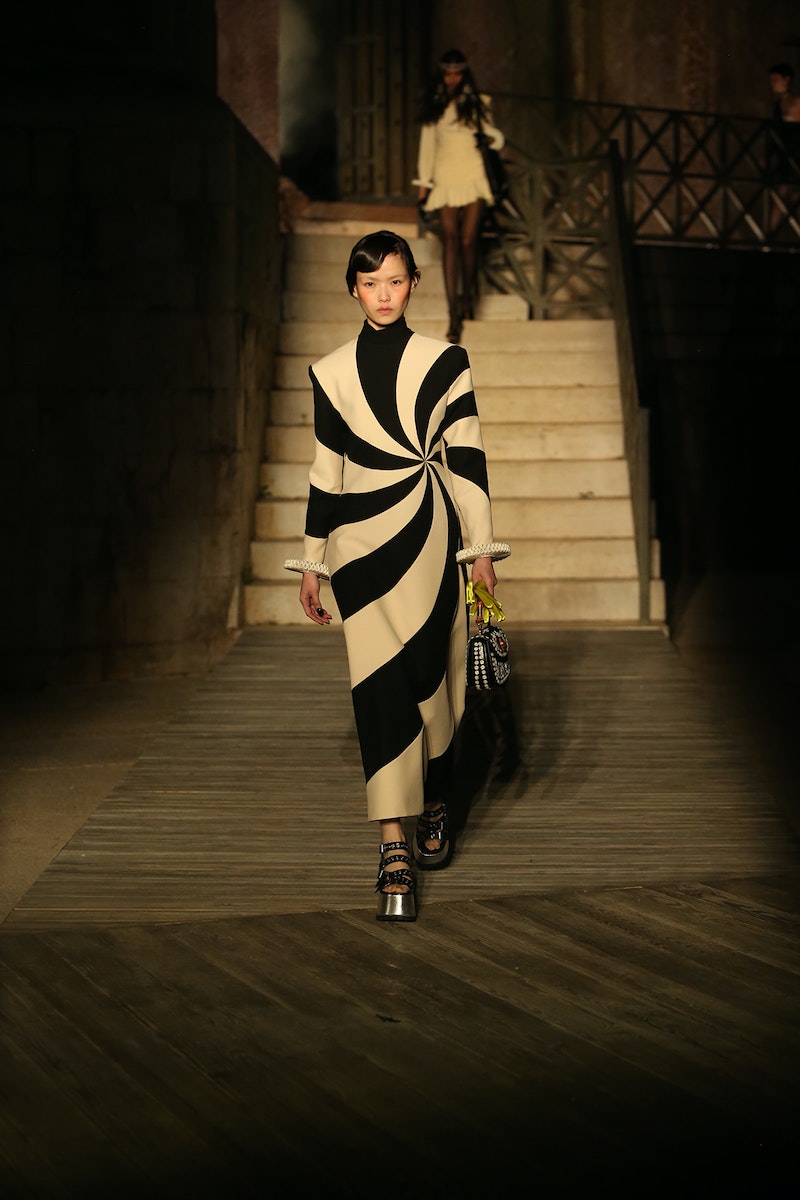 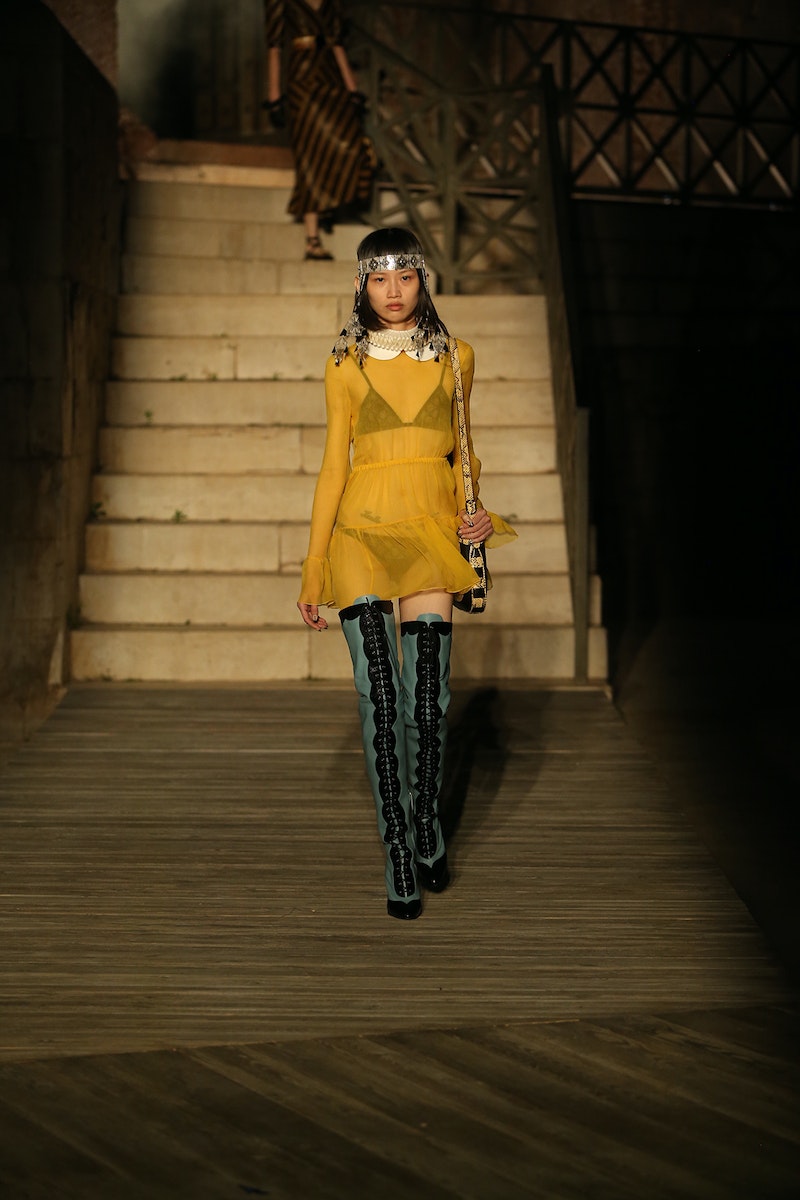 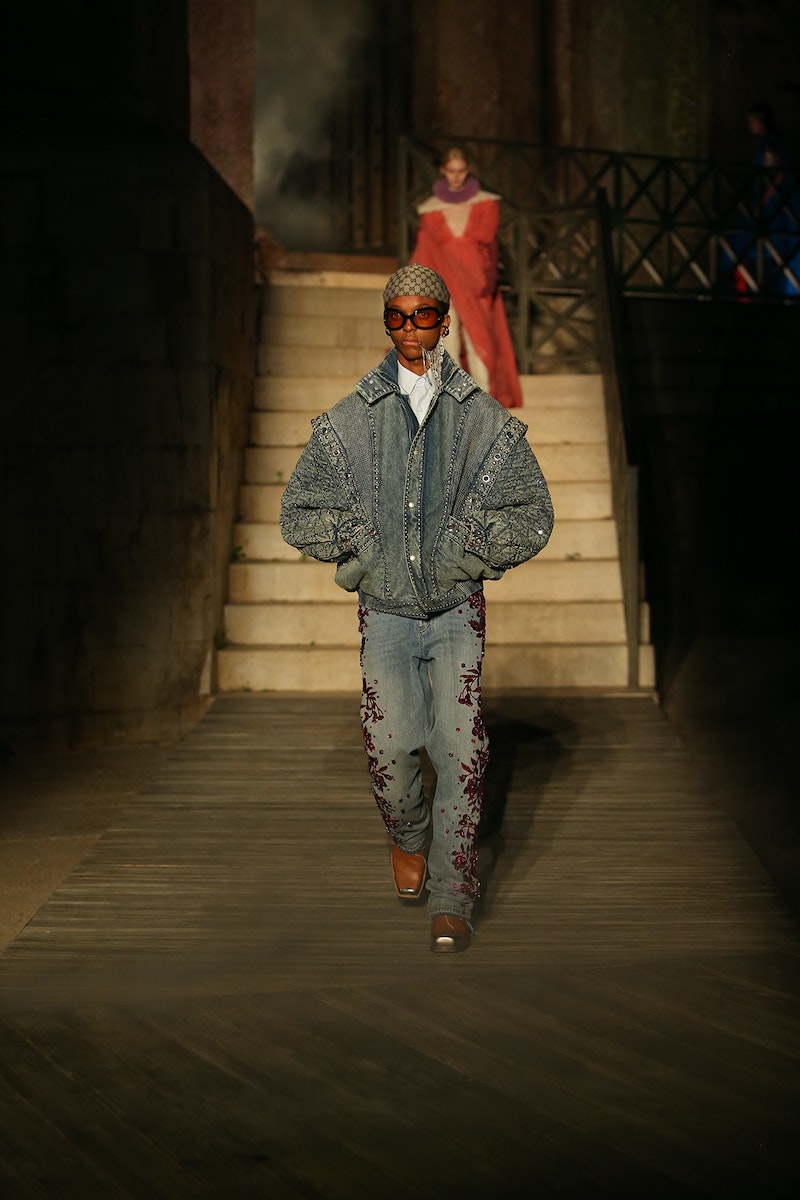 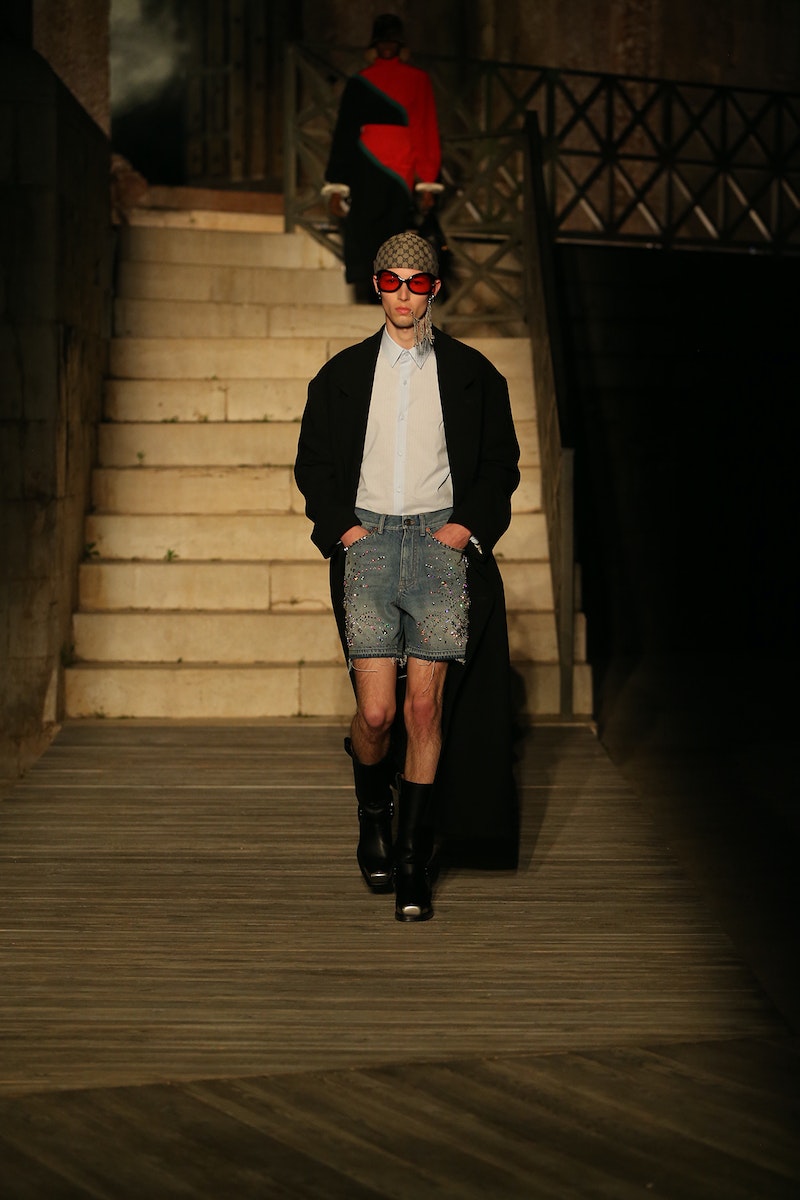 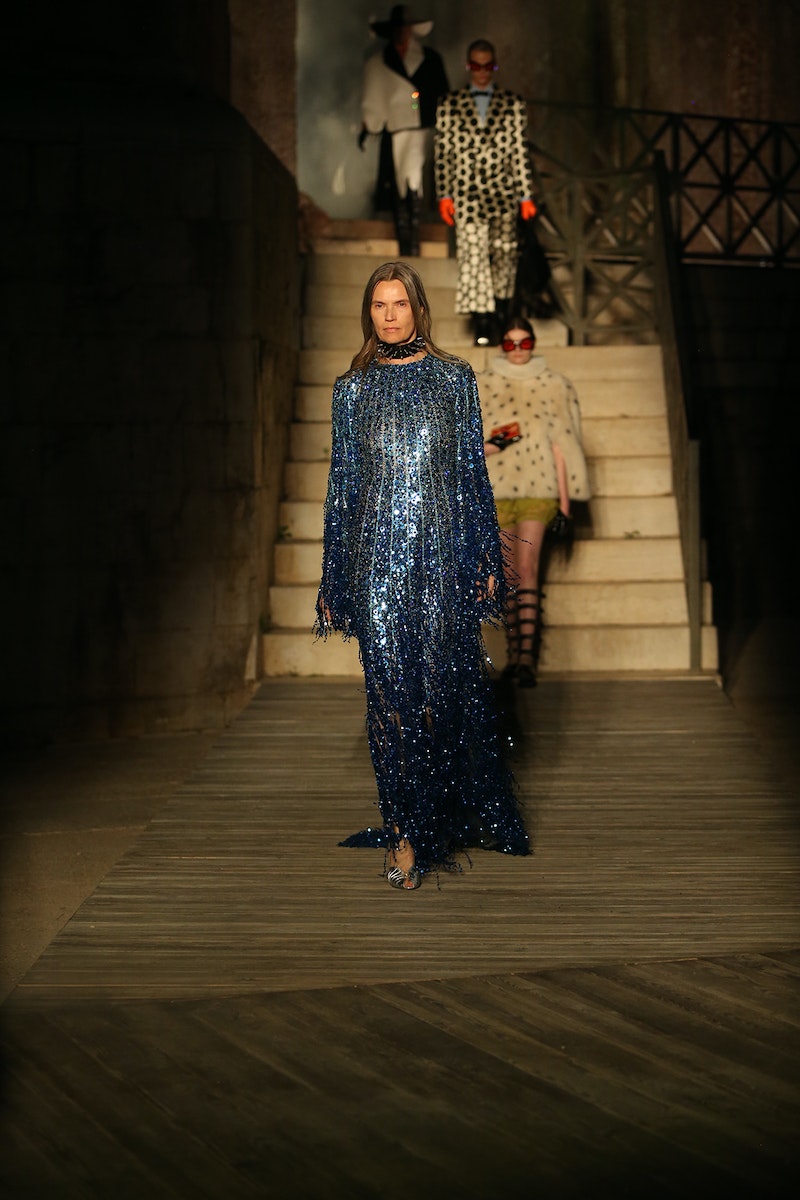 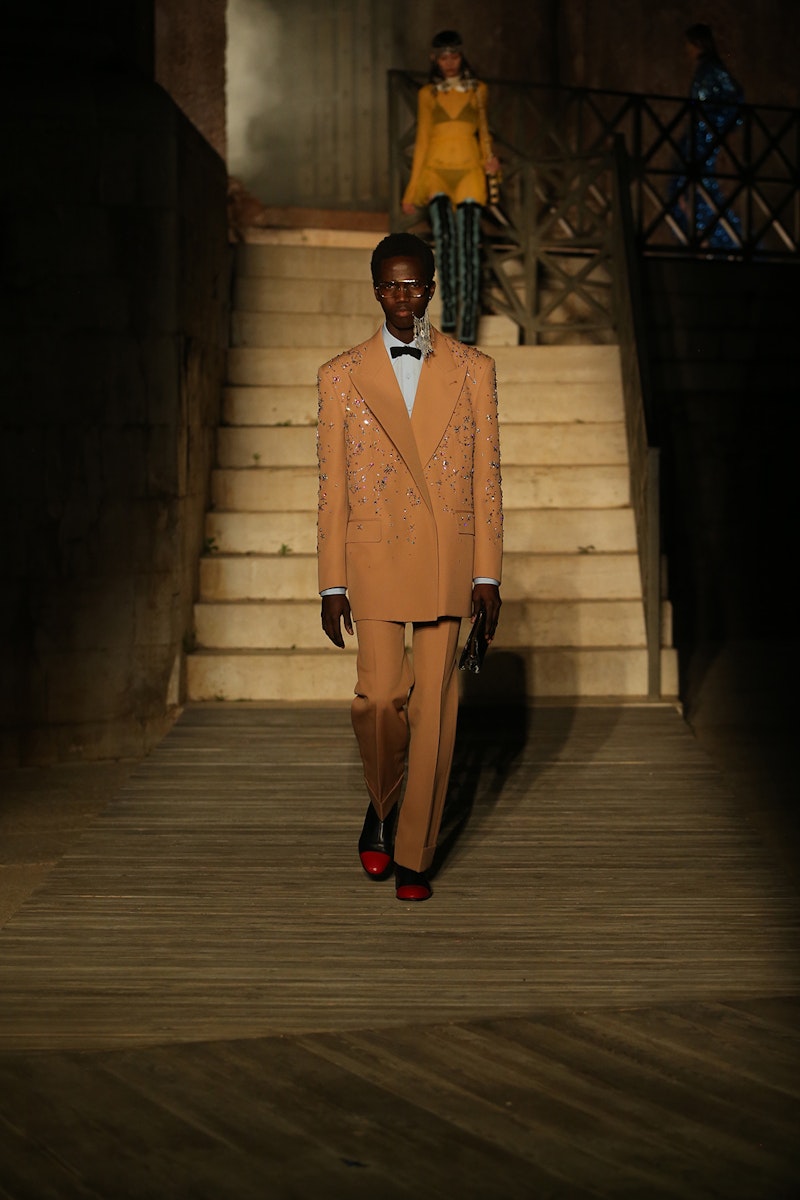 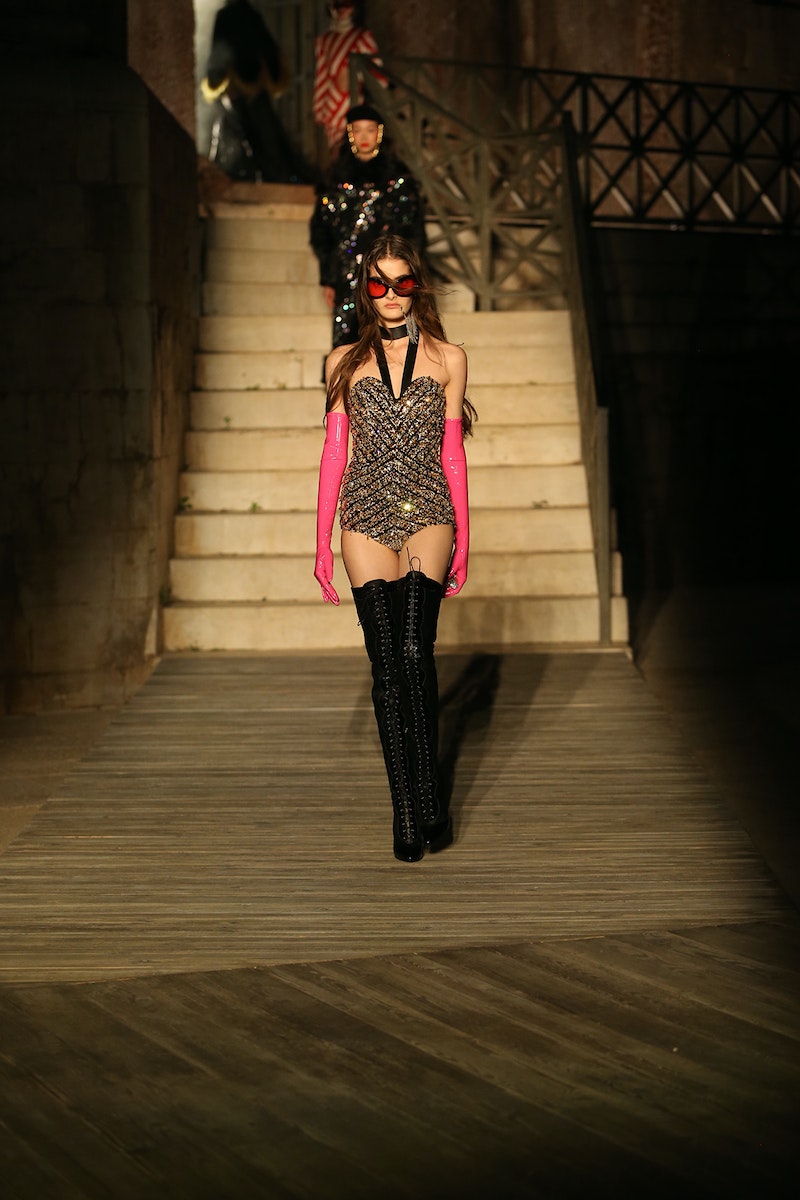 There was little to no chronological grounding in Cosmogonie. Rather, Michele interpreted the historical teachings of Benjamin to articulate his own transcending of time, hopping between decades and taking nostalgic elements before remixing them to Michele’s glittering standard.

And here’s where Michele’s treasure chest unpacks itself, in a collection made up of pieces seemingly unearthed from the eerie cosmos of the past. Drawing upon key moments in sartorial history, from the hedonistic dancefloors of the ​’70s to the rigid precision of the Victorians, the creative director magicked up a contemporary ode to the past for what could be the most nostalgic age of all: now.

Backed by the sounds of commentary from astronauts in a rocket over intense classical chimes, Cosmogonie was a literal star-studded affair, camp in its approach and, at times, deeply romantic. A classic pair of denim cut-offs were embroidered with rhinestones and a playsuit looked weighty from the sheer volume of crystals. Cuts ranged from regal, oversized overcoats to figure-hugging, full-sleeve gowns (again, heavily embroidered).

Michele’s sweet spot is his paintballing of colour – hot pink here, canary yellow there, blue, green and red on a spectacular fur coat belted at the waist. The collection felt regal at times, with the inclusion of ruffles on necks and wrists, but throughout, the giddiness of optimism was electrifying.

Towards the second half of the show, lights began to flicker and smoke machines intensified. If it wasn’t for the opera vocals bellowing in the background or Lily McMenamy holding her dress up as though cosplaying a courting royal, Cosmogonie could have been mistaken for a rave. That’s the impression Michele has left this season, that hedonism could be just around the corner. All that glitters, eh?