For designer Rose Murdoch, the best kind of inspiration can be found in the fun-loving party people she surrounds herself with. Quite literally, actually – her friends’ faces are plastered on pieces in her first collection, which launched exclusively on SSENSE last week.

“I’m all about loving anyone doing whatever they do, even people on the street, seeing the way they wear their clothes,” she says. ​“It’s not hugely conceptual, it’s rather seeing how and why people wear their clothes.”

Balancing the cult bedroom aesthetics of late-’90s films like The Virgin Suicides and Ghost World, as well as the subculture-obsessed TikTok styles of Gen Z, Murdoch’s designs are irreverent in their approach, a frothy patchwork of art school DIY and feminine cuts. But they’re still totally hard as nails.

Growing up in Wellington, New Zealand, Murdoch never really decided to become a designer, per se. It all kind of happened naturally from an early age. She was always obsessed with making things in her teens and her mum happened to teach her to sew. ​“I was rubbish at school! I’m really dyslexic and I didn’t know until I was a little bit older – I just thought I wasn’t smart.” During that time, Murdoch would ditch the homework and sew instead. ​“That’s how I got good at it. I’d just go home and sew.” 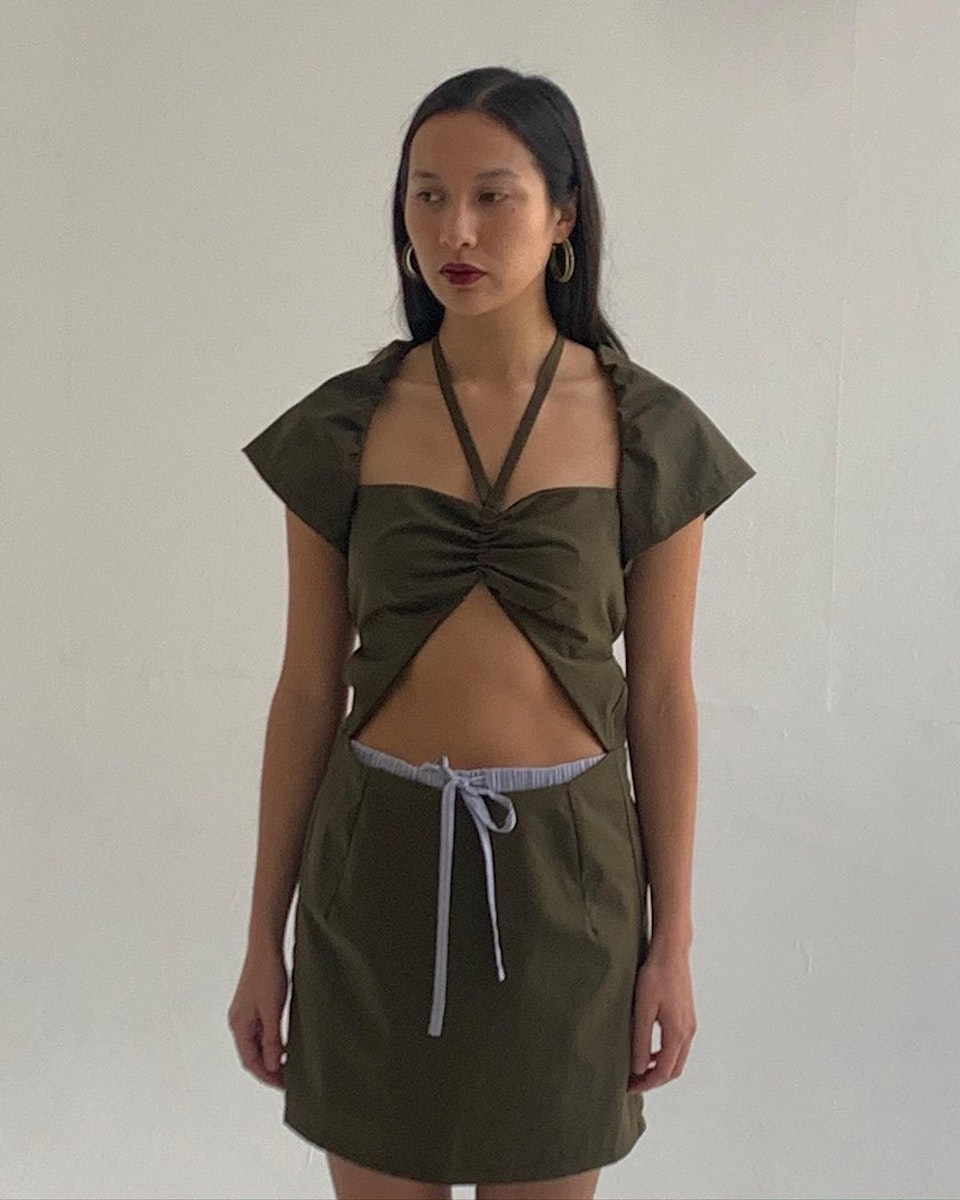 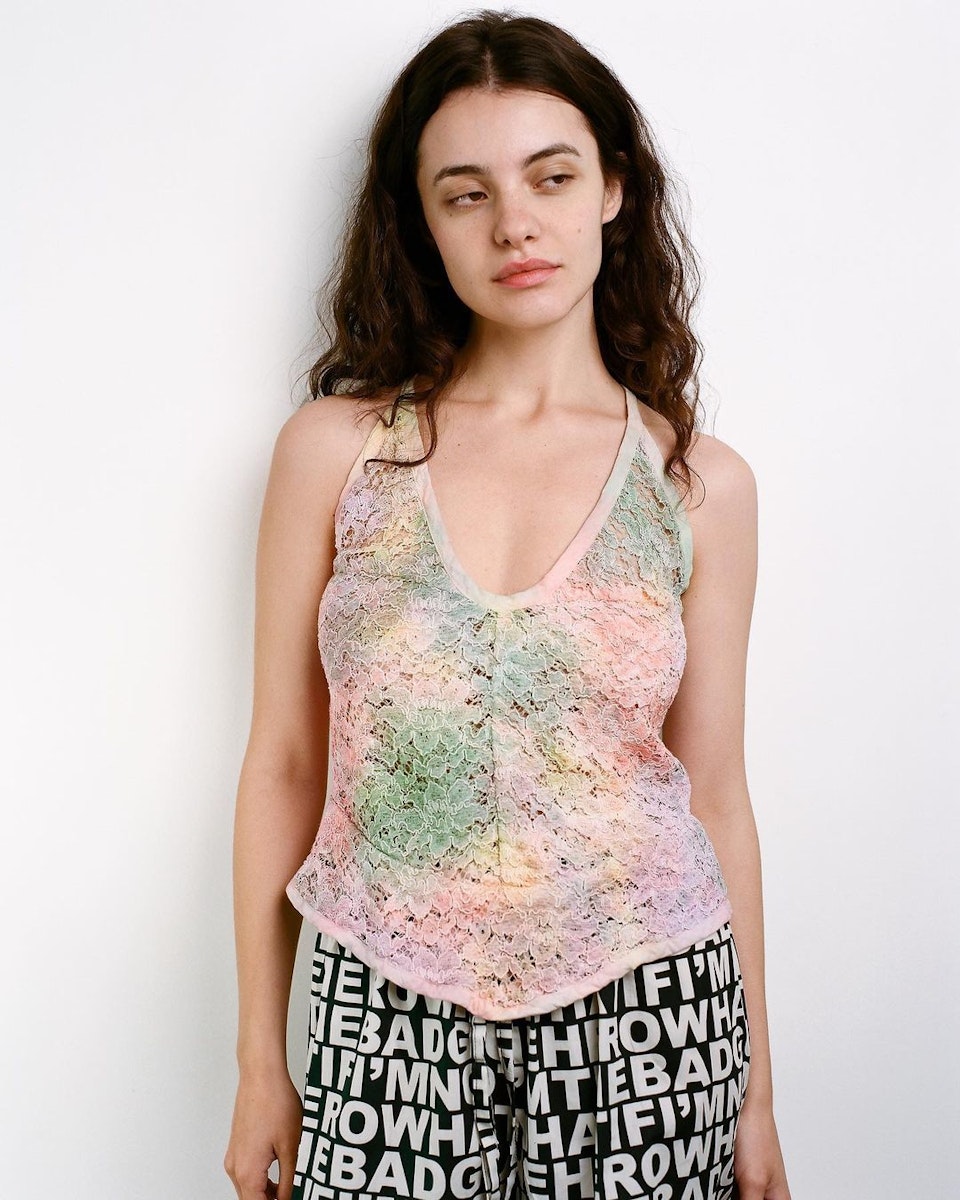 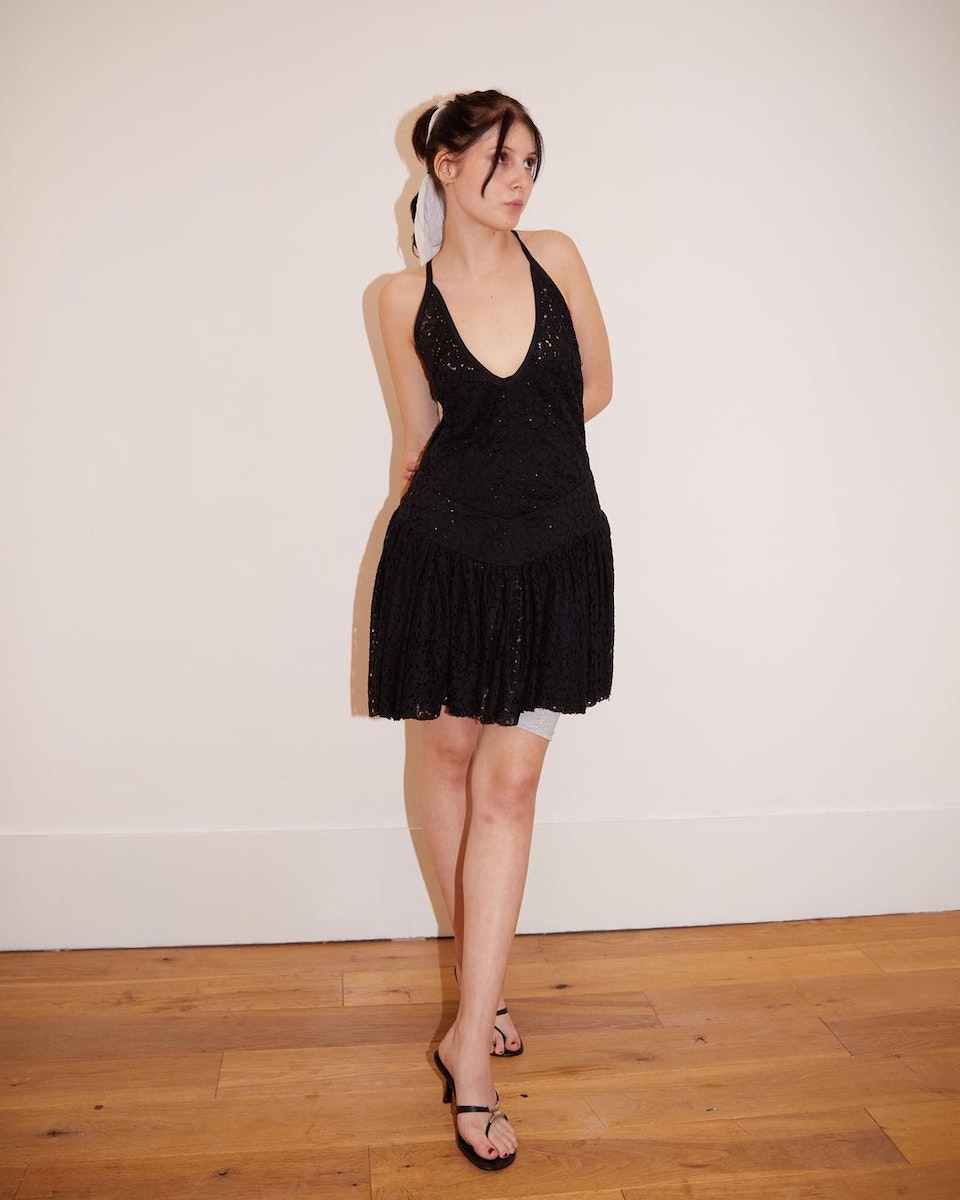 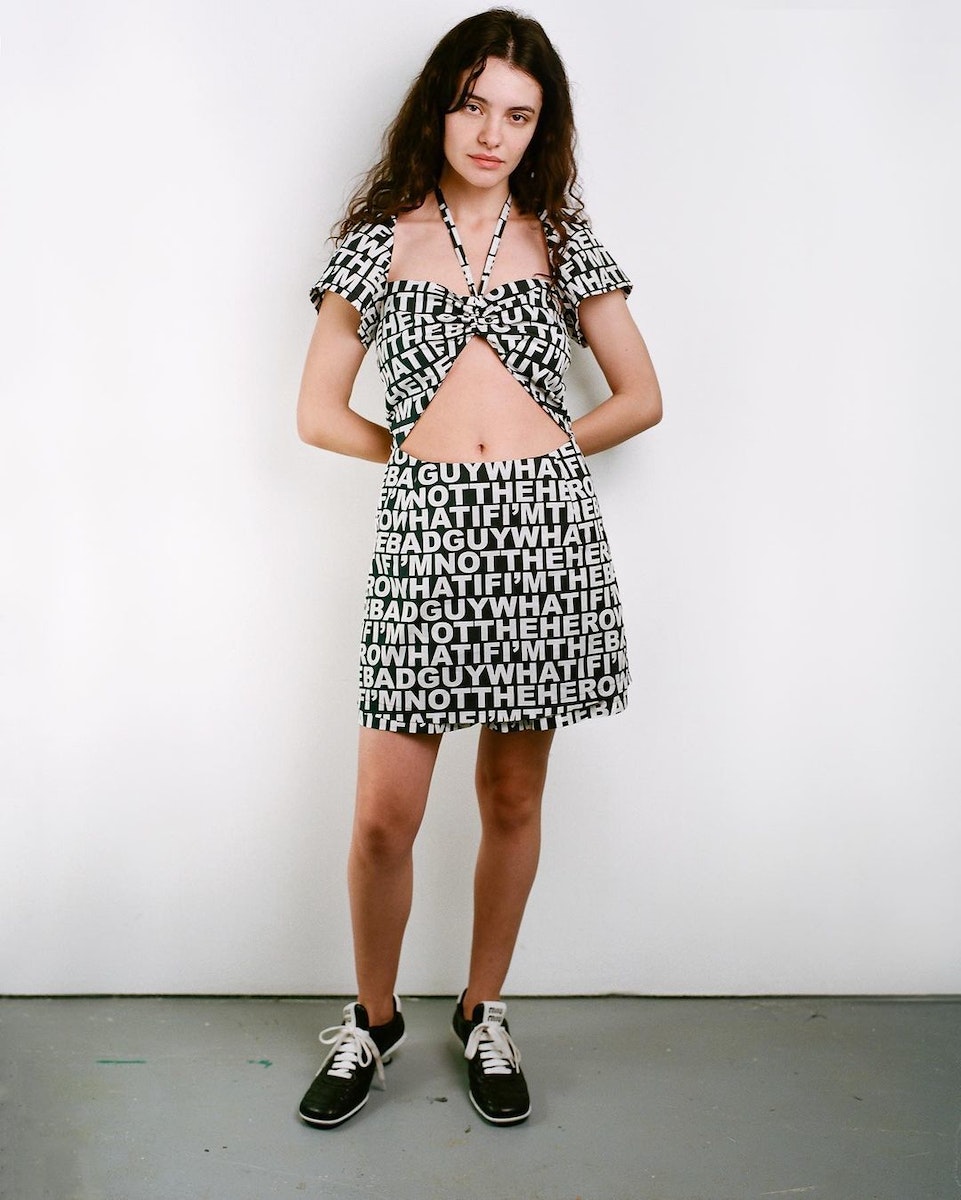 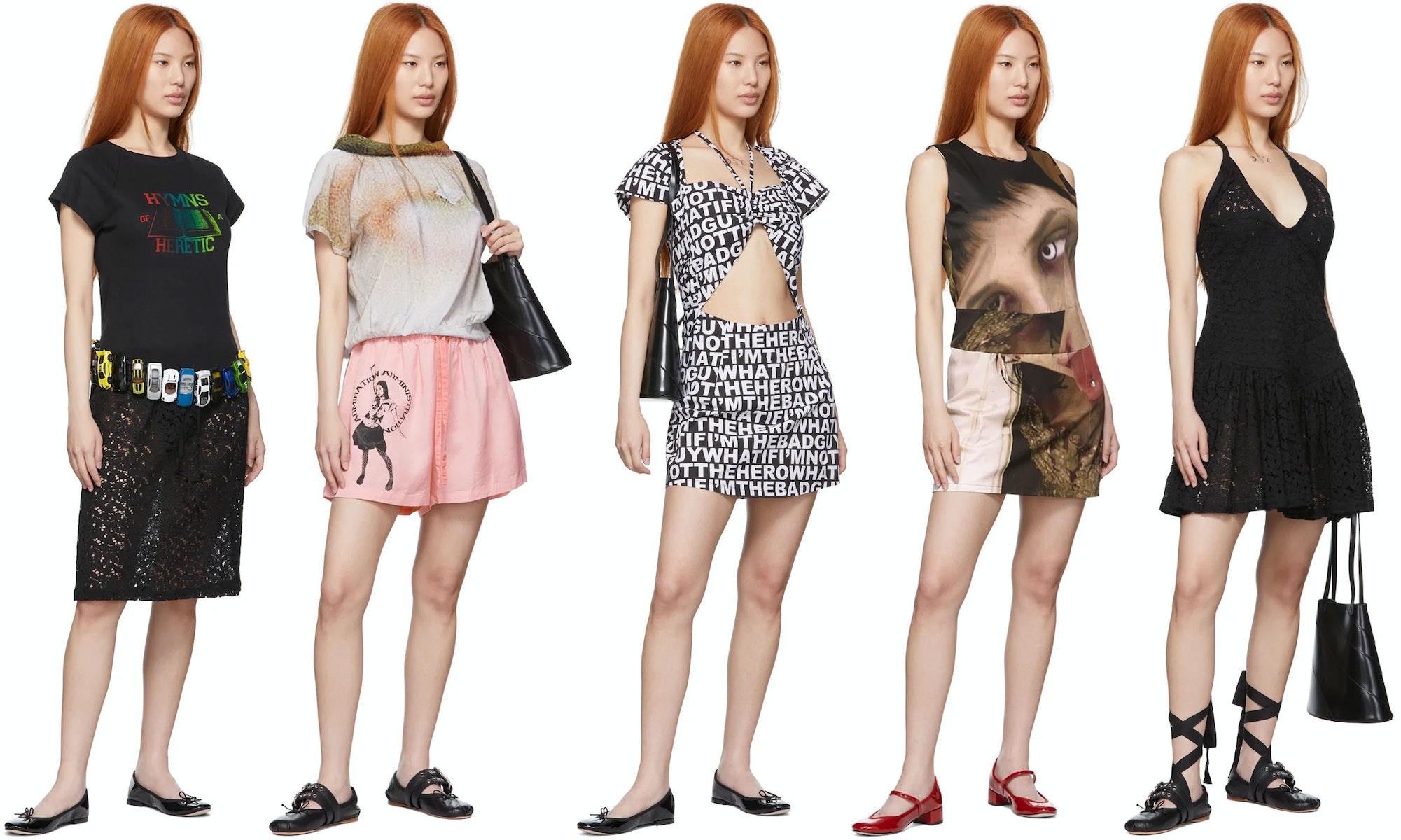 After a brief stint studying fashion design at the University of Wellington, Murdoch dropped out, figuring the classroom wasn’t for her. And she had a better offer: ​“I dropped out because I had had my stuff picked up by a local store,” she says.

Murdoch had, as she puts it, a ​“generic teenage experience”. Feeling trapped with an urge to explore outside of New Zealand, she found a new home when she moved to London in 2018 and hasn’t looked back since. Although she does admit she appreciates the beauty of her home country’s sandy beaches and epic landscapes now. Who wouldn’t, eh?

Before the big move, Murdoch secured two part-time jobs: one as a nanny and, to her surprise, an internship with Ashley Williams. There, she met her now-best mate and fellow designer, Dolly Milkes of brand Dolly.

Still occasionally working for Williams, Murdoch’s been chipping away at her own designs ever since her days in the studio. But now, she’s designing at home. “[The SSENSE collection] is mind-blowing to me. I still just work out of my bedroom!” she says. ​“It’s a mix of a bunch of different styles that I’ve been working on for the past two years. Honestly, I’m so excited thinking about people I don’t know owning it and making it their own.”

Below, Rose goes Off the Rails looking for Atlantis, having dinner with Cleopatra and Princess Di, and watching Dune on a teeny tiny screen.

What’s your motto in life?
Be kind and work hard.

Who would you most like to see wear your clothes?
Cleopatra! She’s my favourite of all time.

What do you reckon you’d be doing if you weren’t a designer?
Realistically, I have no idea. But I would love to look for Atlantis.

What’s the last film you saw?
I actually flew back from visiting my parents [in New Zealand] the other day. I don’t sleep on planes so I watched like 15 movies, because it was over two days. I watched Dune – it was so good, but I was on a plane so it was tiny.

What gets you out of bed in the morning?
Tea and coffee.

What do you currently love and currently hate?
I’m obsessed with Gogglebox and gardens, and I hate the Tories.

What do you listen to the most in the studio?

Lots of different podcasts. My favourites right now are You’re Wrong About and Intelligence Squared. I also love having people chatting!

Where is the best city to let your hair down?
Honestly, I haven’t done very much travelling, so I’ll have to say a beach in New Zealand.

Who would you invite around for dinner?
Cleopatra, Chelsea Manning, Princess Diana, Daniel Johnston, Kathleen Hanna and my mum.