Two sculpted men clad in leather walk down a street side-by-side. Cocks protrude from the crotch of their hip-hugging jeans like not one, but maybe two or three rolled-up socks artfully placed in phallic shapes.

Jaws chiselled and biker caps pulled low enough to cast a shadow over the eyes, a quiff-haired bystander of similar stature admires the men, as the other is about to turn his head.

Over his four decade career Tom, real name Touko Valio Laaksonen, produced over 3,500 illustrations right up until his death caused by emphysema in 1991 in Helsinki, Finland. Now in his would-be centennial, Tom of Finland has been brought to London in his first UK exhibition, Tom of Finland: Love and Liberation, in King’s Cross’ House of Illustration.

Born in Kaarina, Finland in 1920, Tom started to harbour his fascination with the gay fetish underworld while serving as an anti-aircraft officer during World War Two, when he was conscripted into the Finnish Army in 1940.

At that moment in time, and well into the ​’80s and ​’90s, homosexuality in mainstream media was warped, often reported as perverted or as a sign of poor mental health. It was still a criminalised act in many countries, legalised only in 1967 in the US and UK and, later, in 1971 in Finland.

Tom’s partner of 12-years – businessman, director, publisher and co-founder of Tom of Finland Company – Durk Dehner, remembers the hardships of being gay when it could be punishable by imprisonment: ​“What Tom saw were gays [that] were so self-loathing with such poor self-esteem, he thought, ​‘this is all a bunch of crap and I’m going to start depicting men the way that I see them.’”

In walked Tom’s hypermasculine men, inspired in part by the soldiers he had previously worked alongside. His exposure to army uniforms and big butch lieutenants informed his sexual appetite for typical masculine tropes: beefy muscles, broad shoulders, ballooned pecs and enough body hair to carpet a small sitting room.

“He was depicting men as being fully masculine, because masculinity was something that was not given to us,” says Dehner. ​“It would mean we would be too close to our heterosexual counterparts.”

After his stint in the military, Tom’s career leaned towards magazines in the early ​’50s. He took with him the black and white sketches he’d started developing after his military days, but strict publication policies meant that man-on-man action – even touching – was strictly prohibited.

“At that time, you couldn’t show any frontal nudity and you couldn’t have guys touching each other unless they were wrestling or fighting,” he says. ​“There was no affection that was permitted between men in publications.”

But in the spring of 1957 – 10 years before the decriminalisation act came into play in the US – his drawings were published in leading Los Angeles-based beefcake magazine, Physique Pictorial. Homoerotic magazines were disguised as ​“health and fitness” mags to preserve the safety of its predominantly gay clientele.

Published under ​“Tom” and later changed to ​“Tom of Finland” by the magazine’s editor, Bob Mizer – a significant figure in the 20th century homoerotic art scene – the images, also presented in the exhibition, show how his work was affected by anti-gay laws, much of it limited to men wrestling, fighting or presented as classical reinterpretations of historic scenes featuring Hercules or Caesar.

It was only after Tom’s death, though, that his partner discovered the subversive side of his work that many, himself included, weren’t aware of.

​“In the archives we found works that were done in the late ​‘50s that were so explicit and so wild,” Dehner says, referring to the fetish content Tom was making at a time when homosexuality was punishable by imprisonment. ​“He was doing those for customers through his private commissions.” 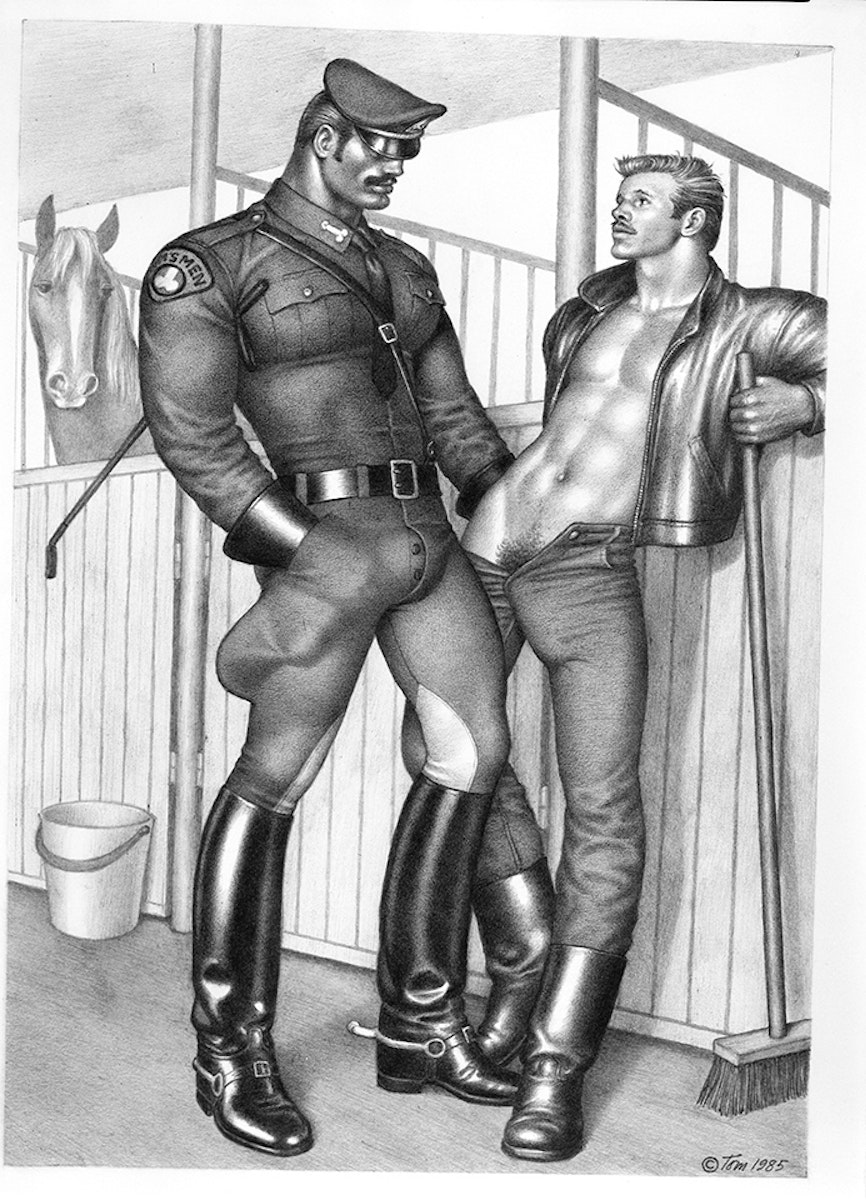 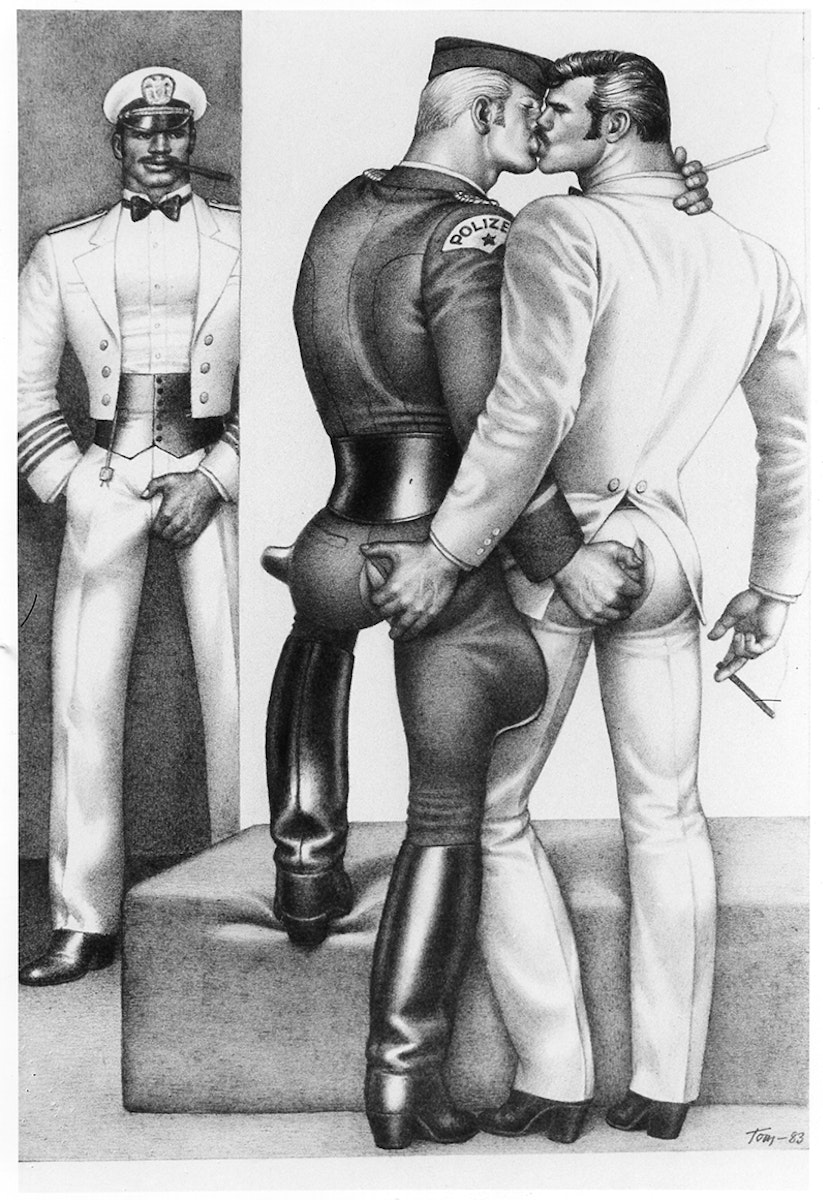 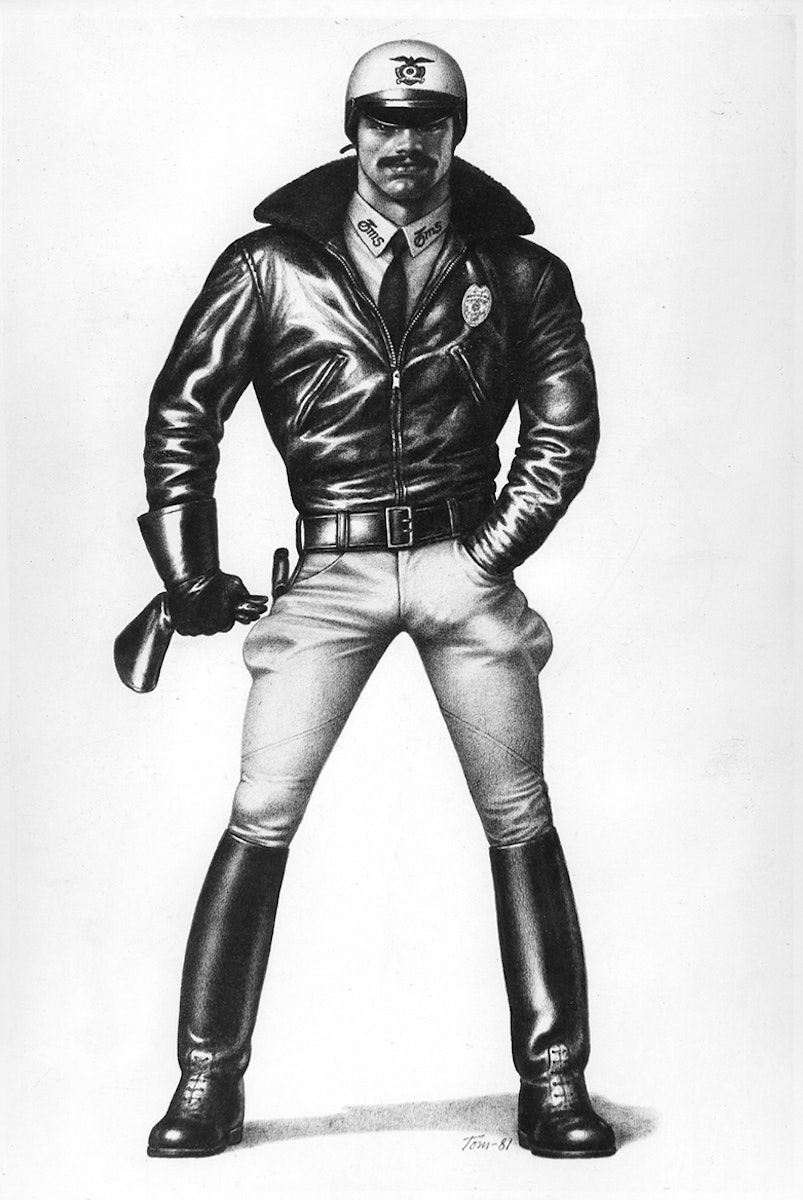 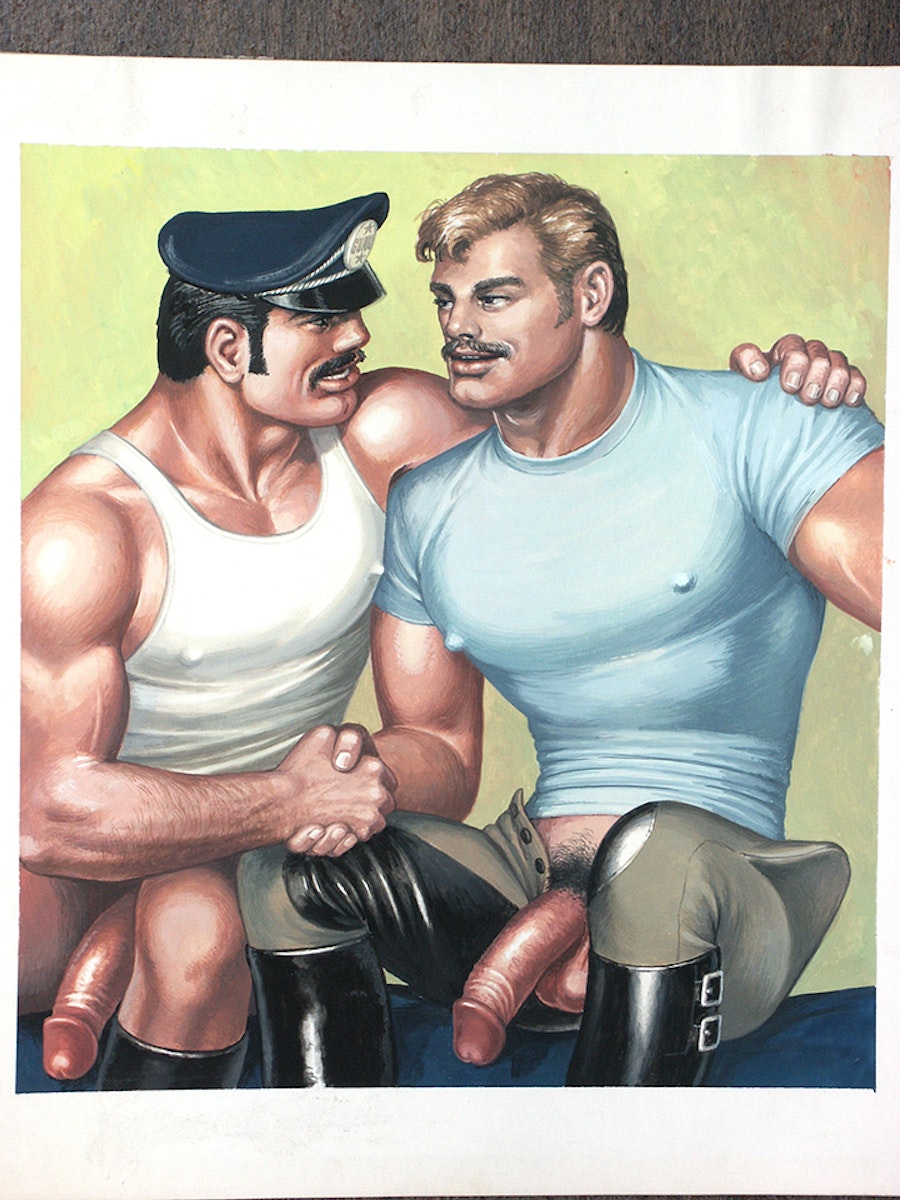 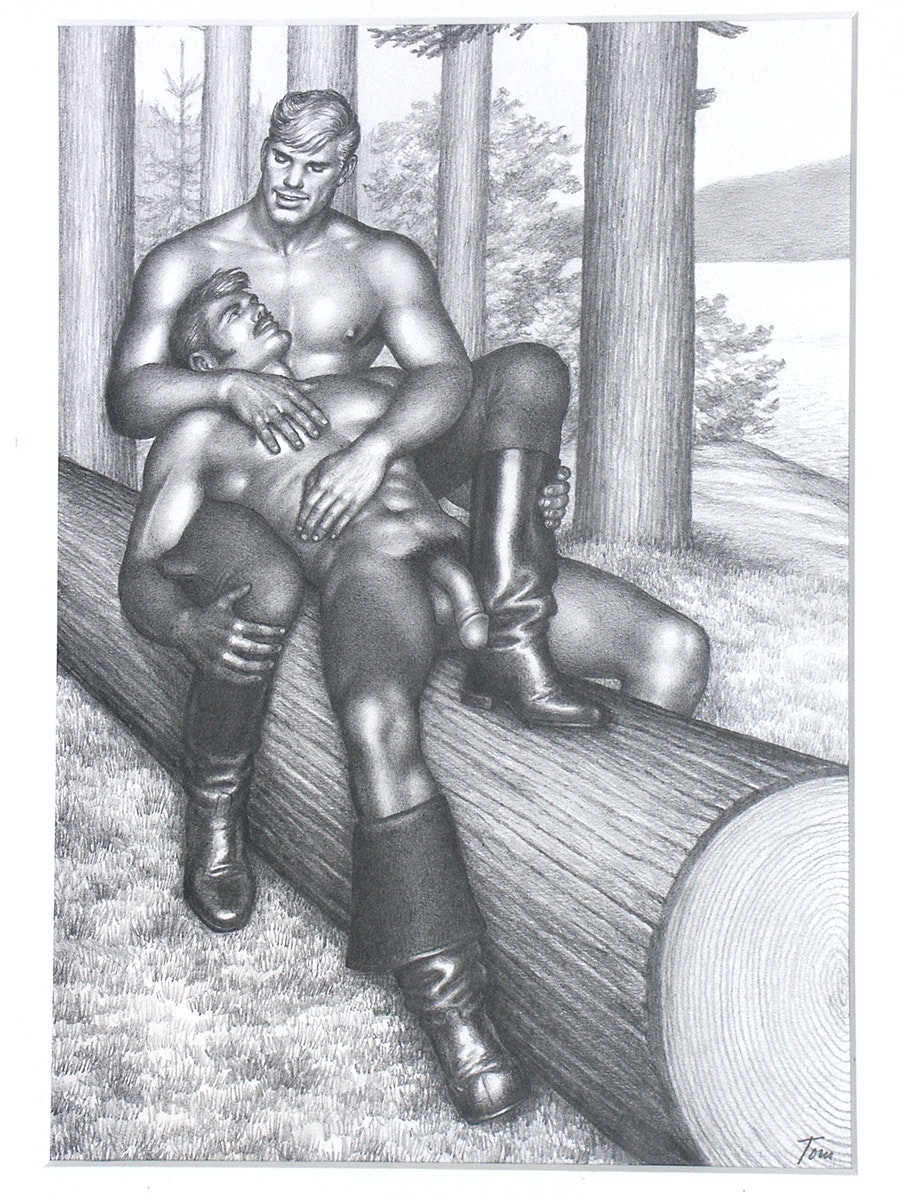 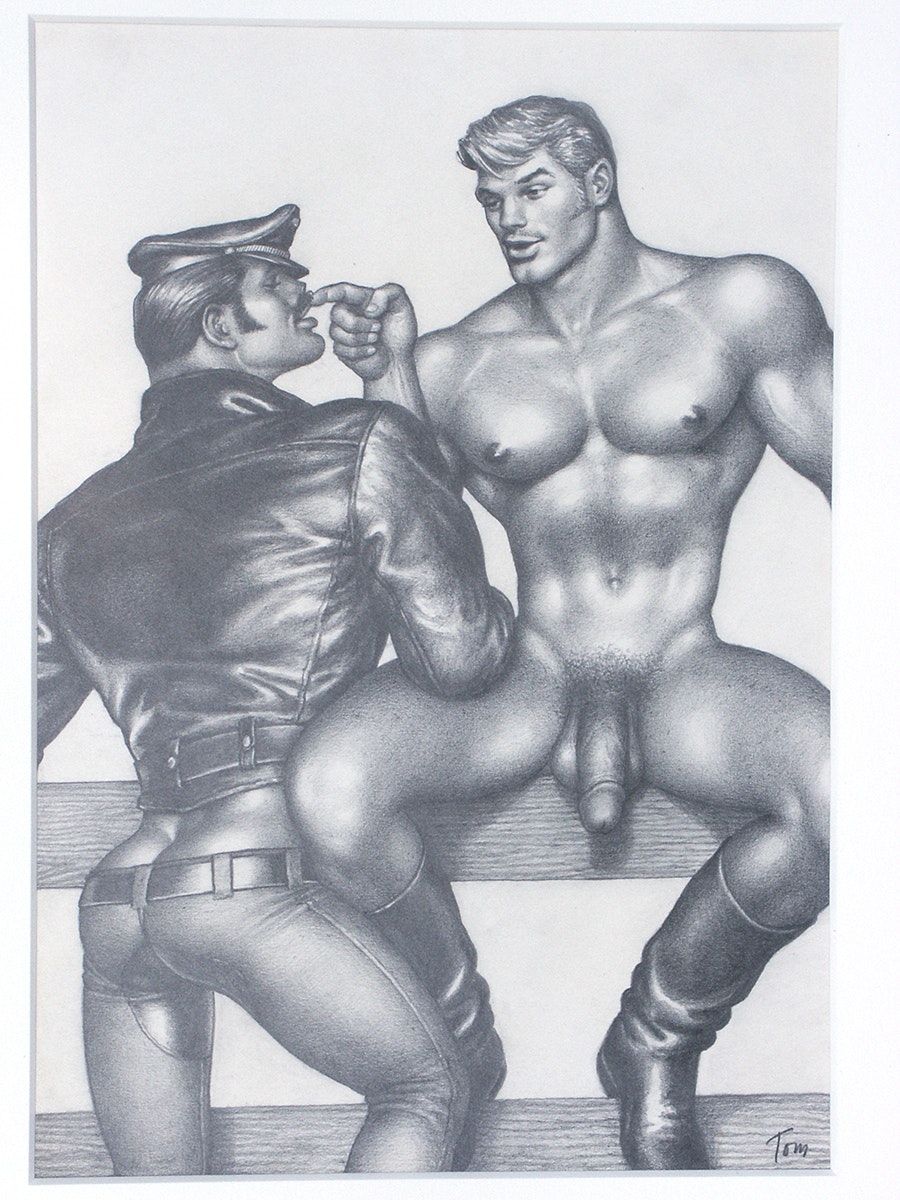 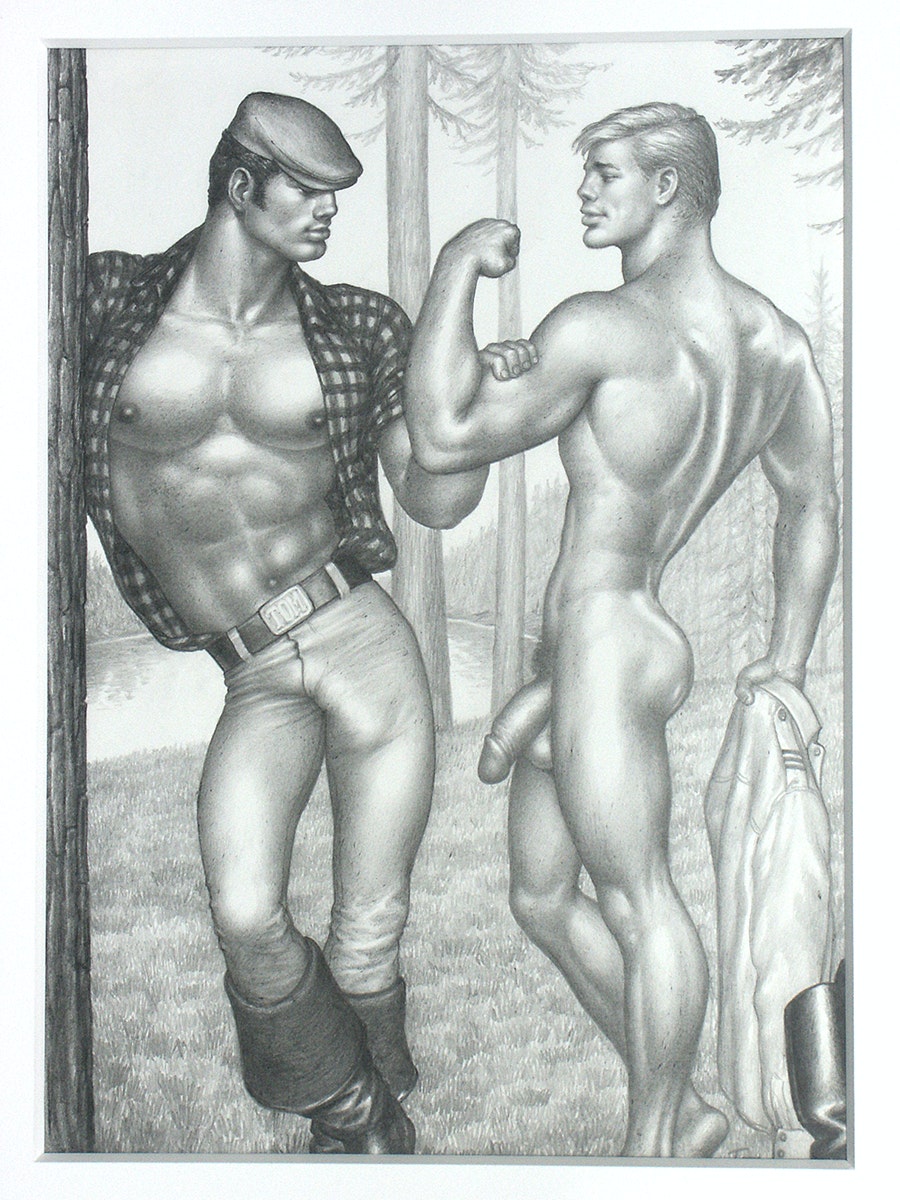 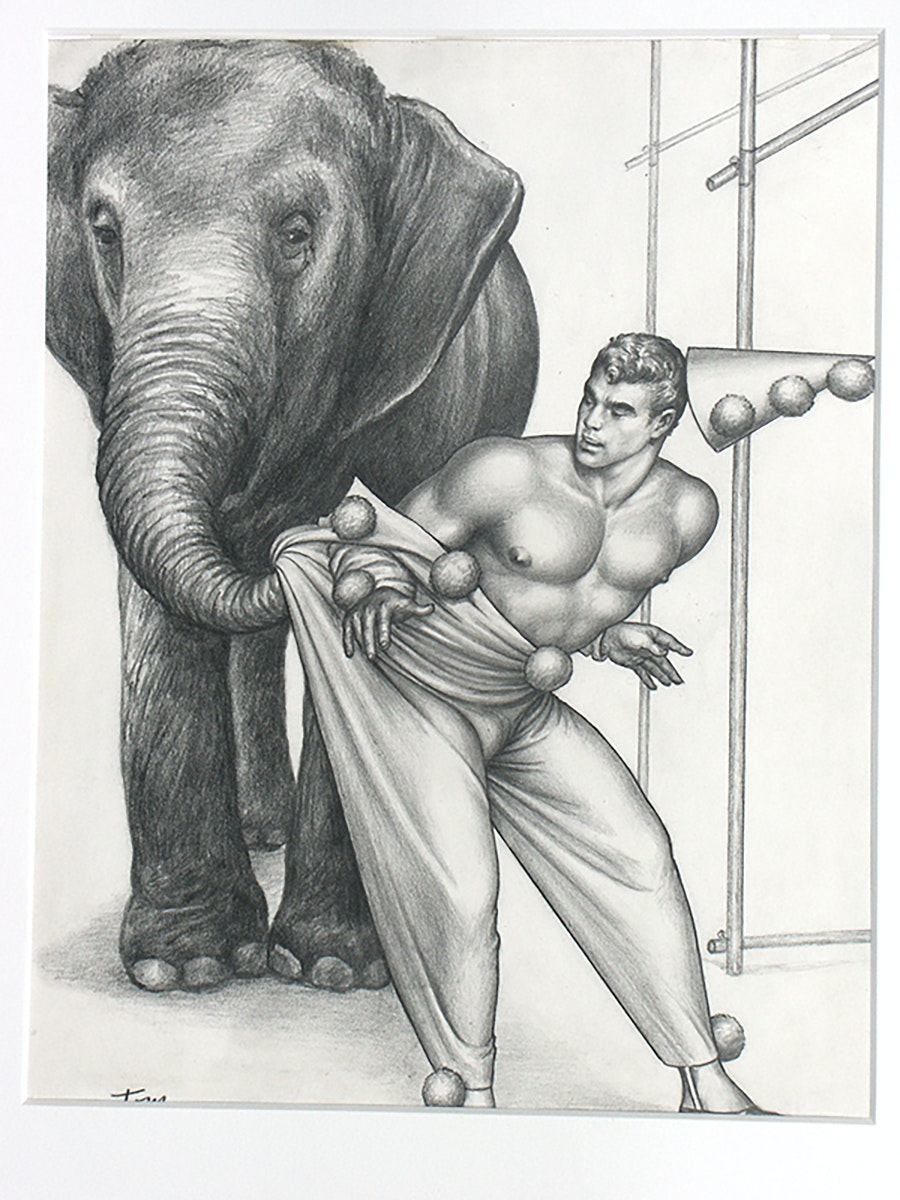 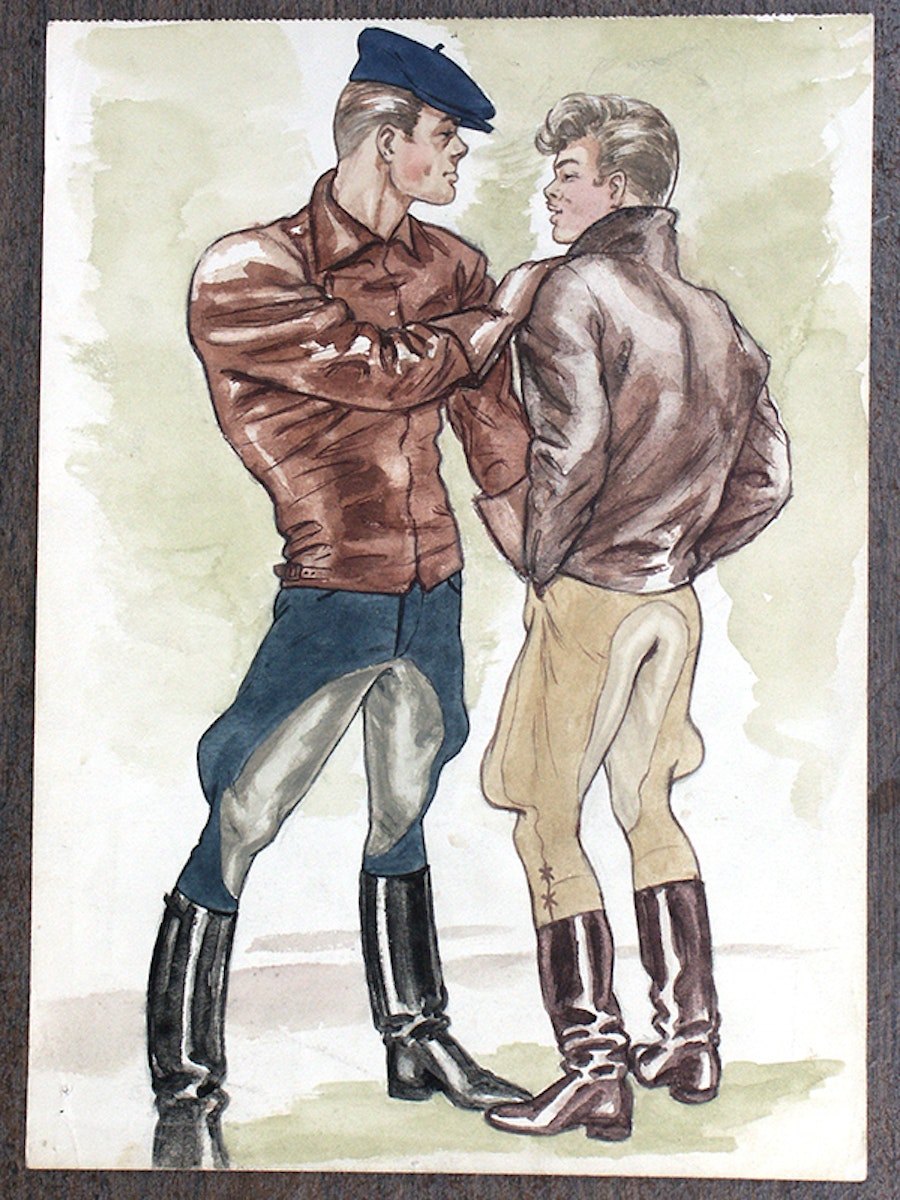 Once he’d made a name for himself in Physique Pictorial, requests for Tom’s prints came flooding in from all four corners of the world. The act of creating the prints was a secretive operation, let alone sending them.

Unable to visit photo labs given the content, Tom developed the prints himself. From there, he’d make catalogues small enough to fit inside ​“aeroplane envelopes” – anything larger would give customs the right to open it, potentially exposing its recipient.

For Tom, the importance of spreading the gay-positive message far eclipsed the risk of imprisonment – a testament to his goal of ​“sharing the message of ​‘gay is good’,” says Dehner. ​“That was true all the way up to his completion, to his end.”

Dehner first came across Tom’s work in New York City, then 26-years-old, when he spotted his provocative work on a bar room bulletin board advertising a motorcycle run. Dehner remembers being taken aback by the image, he showed it to his friend Etienne and asked who the artist was.

“The drawing was a new experience for me – I’d never [been] emotionally affected by art,” says Dehner. 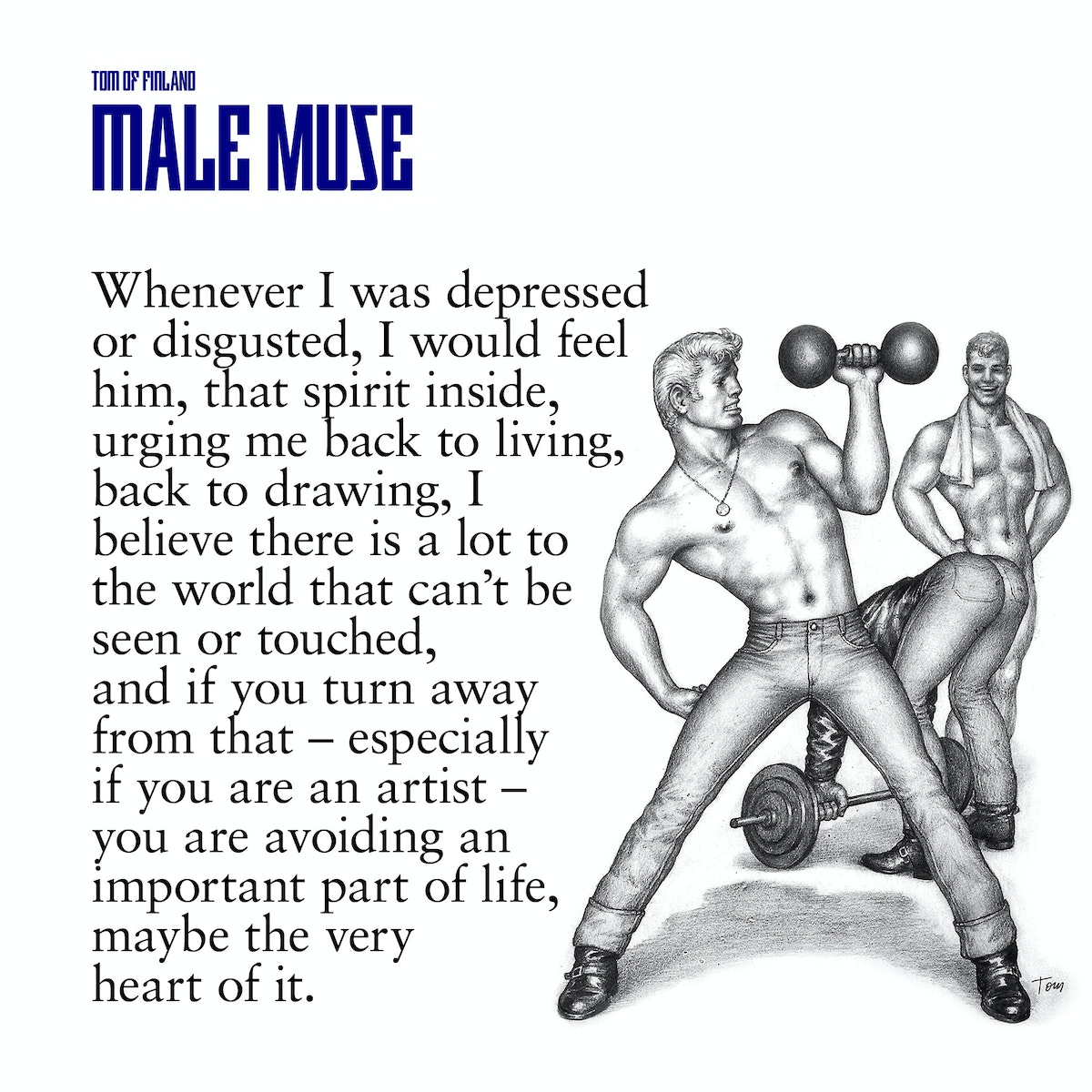 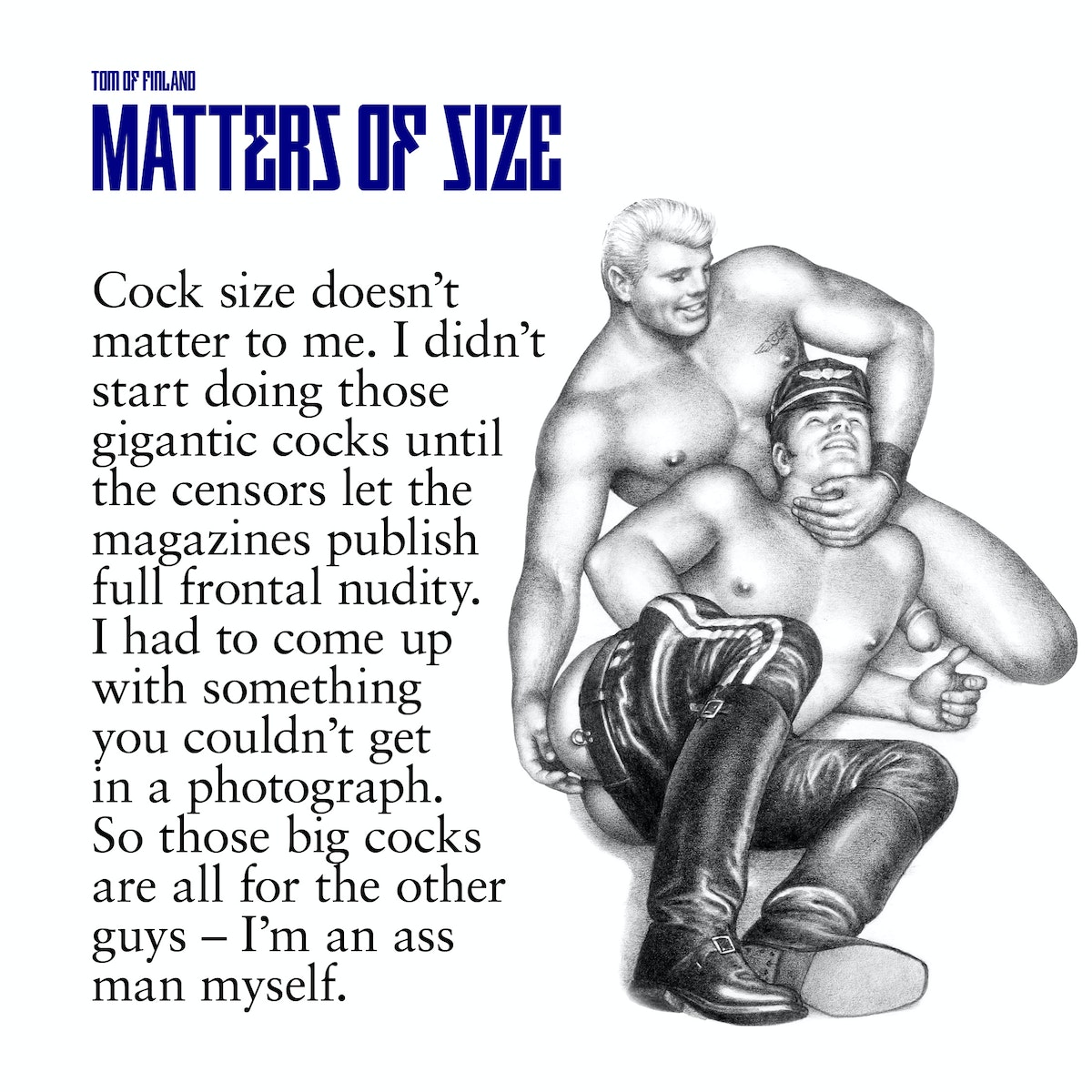 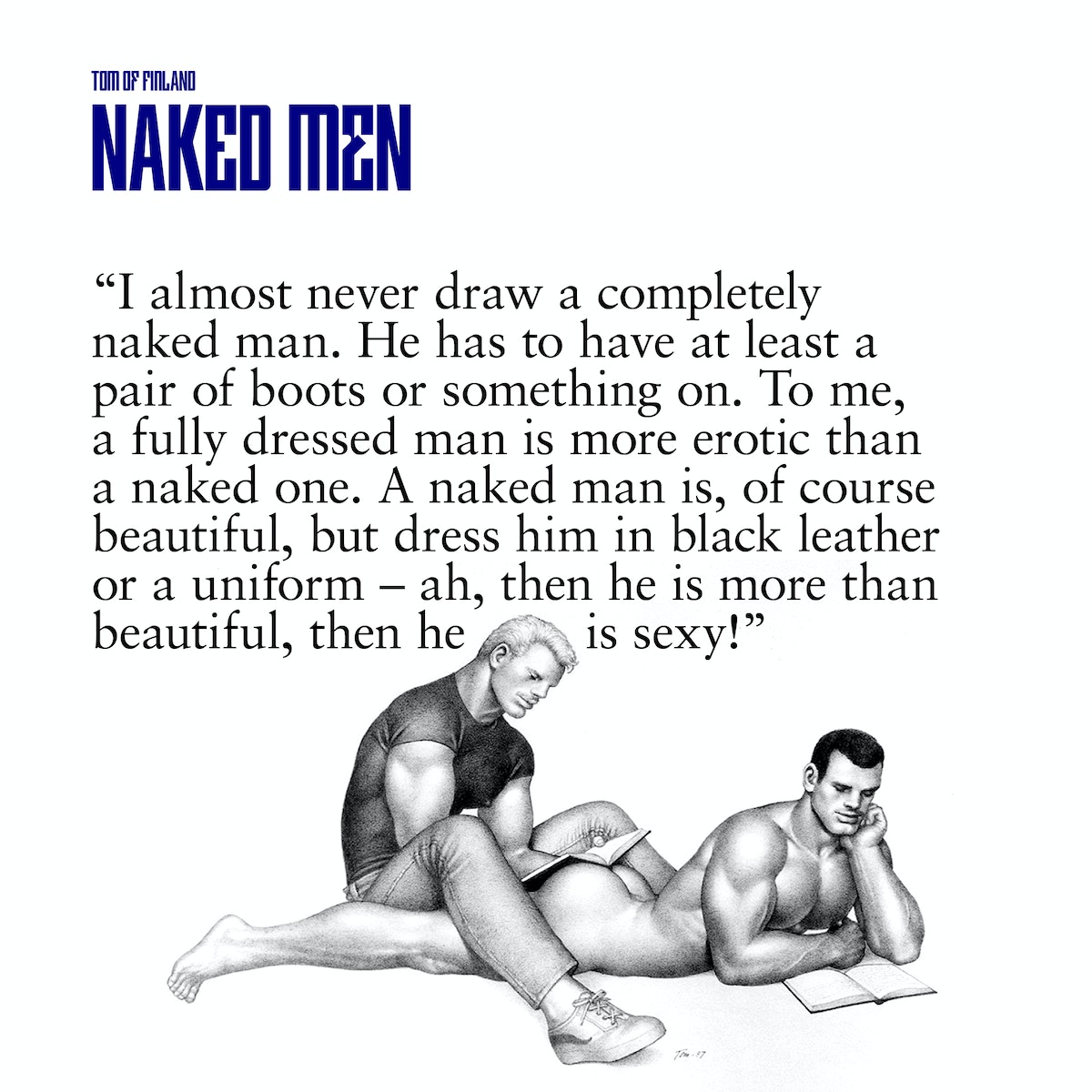 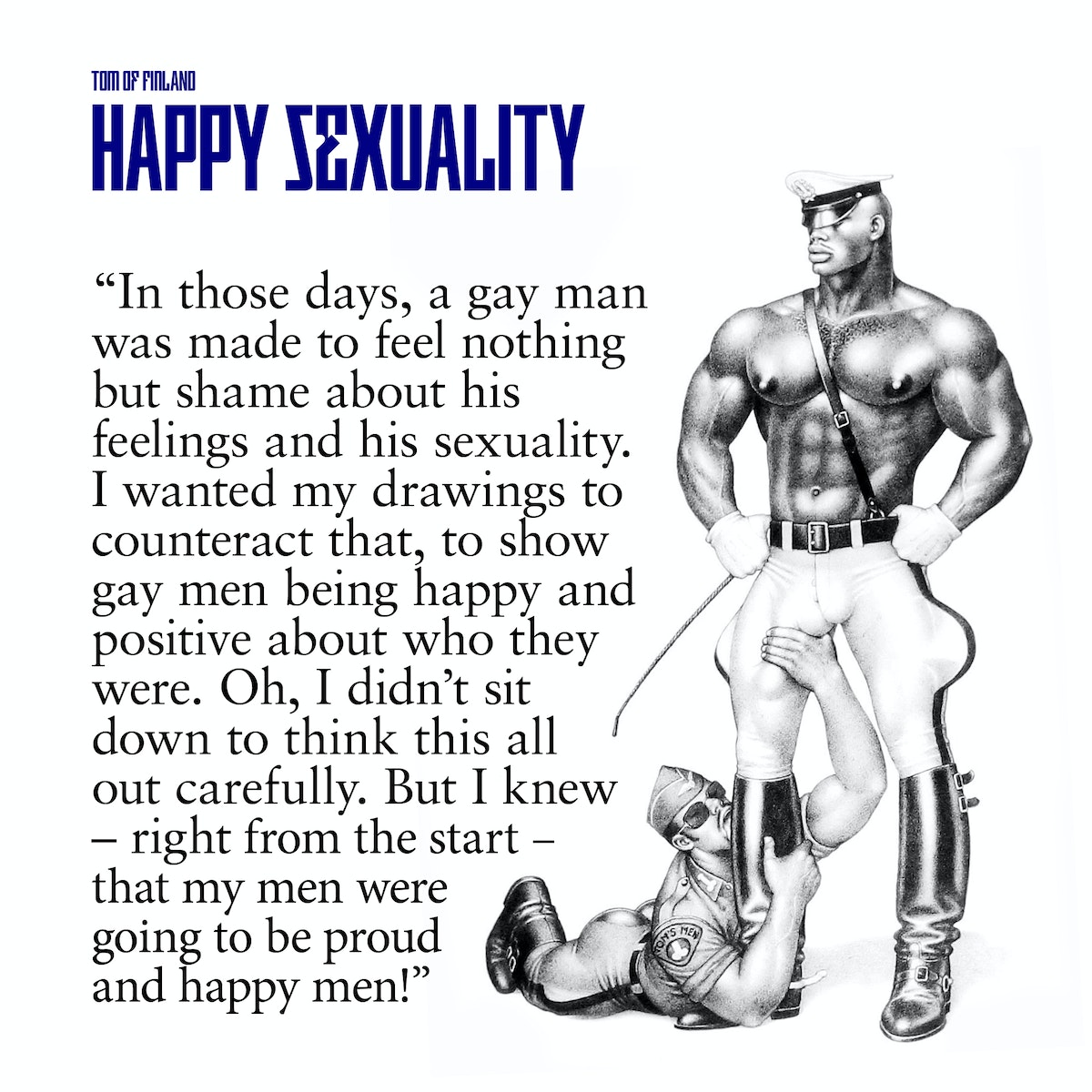 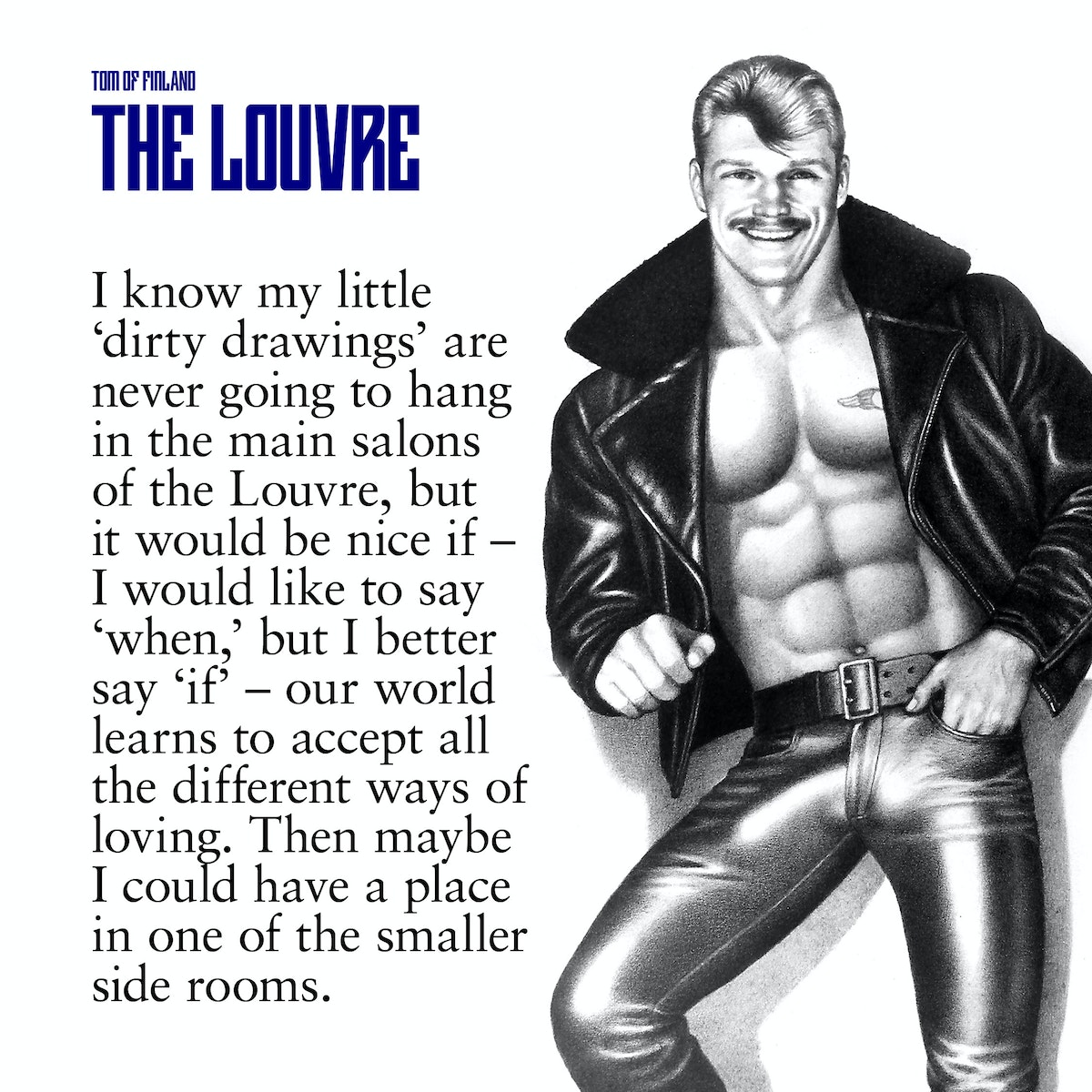 “[In the ​’80s] the house ended up being a gathering place. Artists would come over to hang out – it was the place where they could feel free. They didn’t have to call up and ask for an invite, they’d just show up,” Dehner fondly remembers.

According to Dehner, Tom loved California. He immersed himself in the ​“bursting” leather scene, quickly becoming ​“one of the gang”. Around this time, gay men of all classes and races would congregate in the bars. Dehner recalls many nights when Tom would bring back ​“some pretty hot hunks that he had hooked up with in the bar – I could leave him at the bar and five minutes later he would have struck up a conversation with somebody. He was no wallflower,” says Dehner.

So how have Tom’s illustrations – once so explicit they had to be sent via mail in disguise – endured seven decades? Because his message is as valid today as it was then, setting out to make gay men feel good about themselves. They were proud, cock-hungry homos.

“It’s timeless and sexy,” says Dehner, ​“and sexiness doesn’t go out of style.”