Tremaine Emory is no stranger to designer collaborations. As a consultant, the omni-talented artist has advised the likes of Kanye West and Frank Ocean and collaborated with brands such as Nike, Adidas, Levi’s and Stüssy. Now, the No Vacancy Inn co-founder and FACE family member has added yet another string to his bow: a super-slick collaboration with Champion. 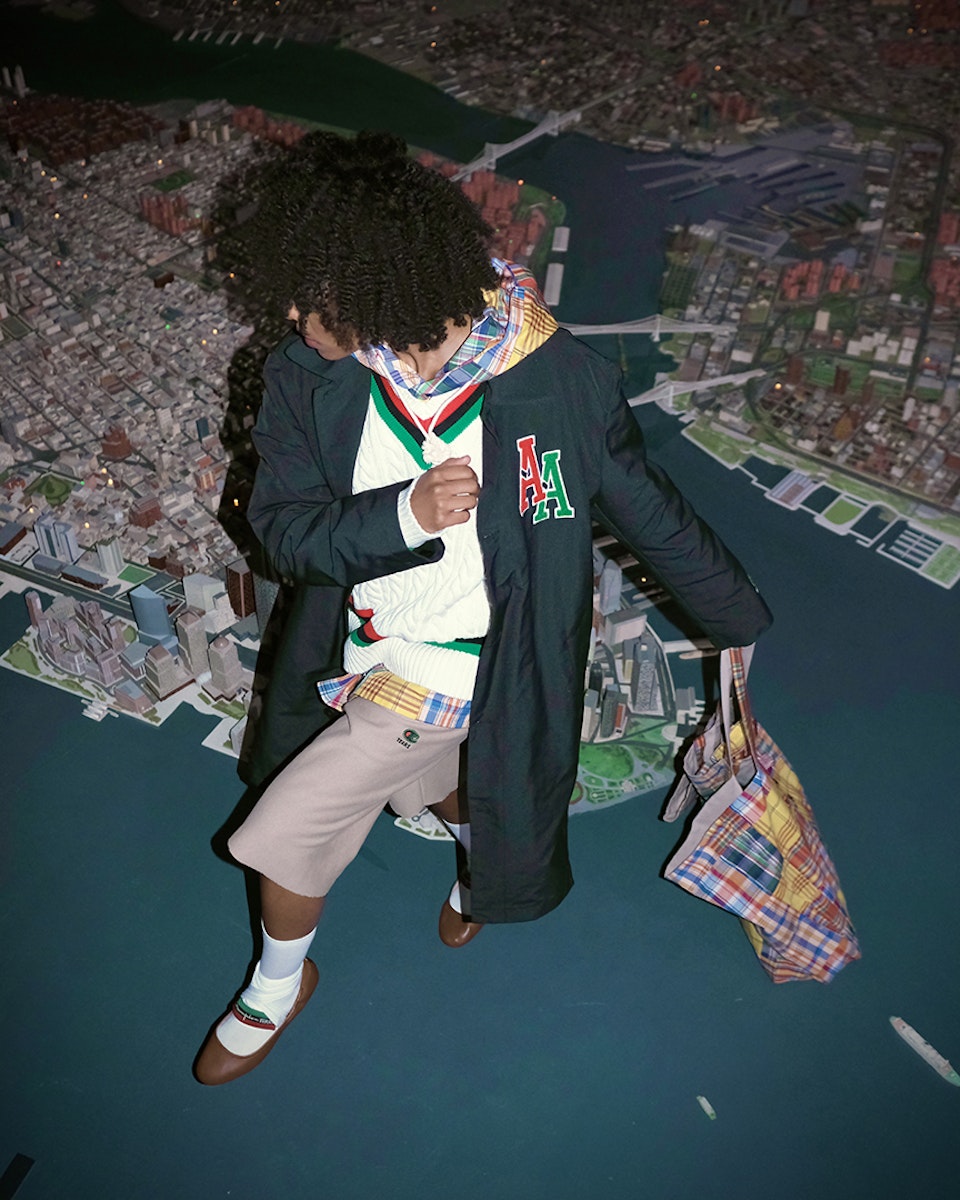 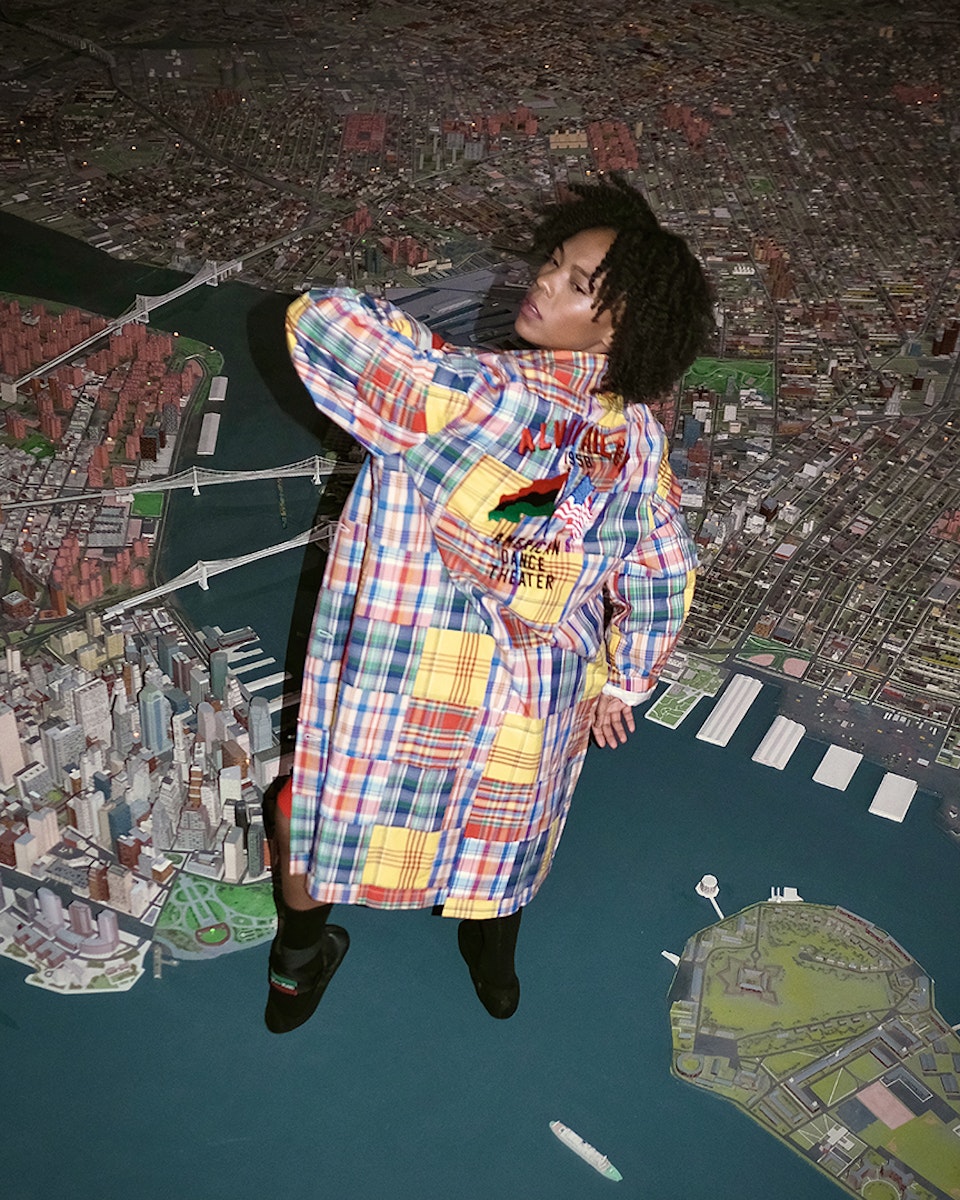 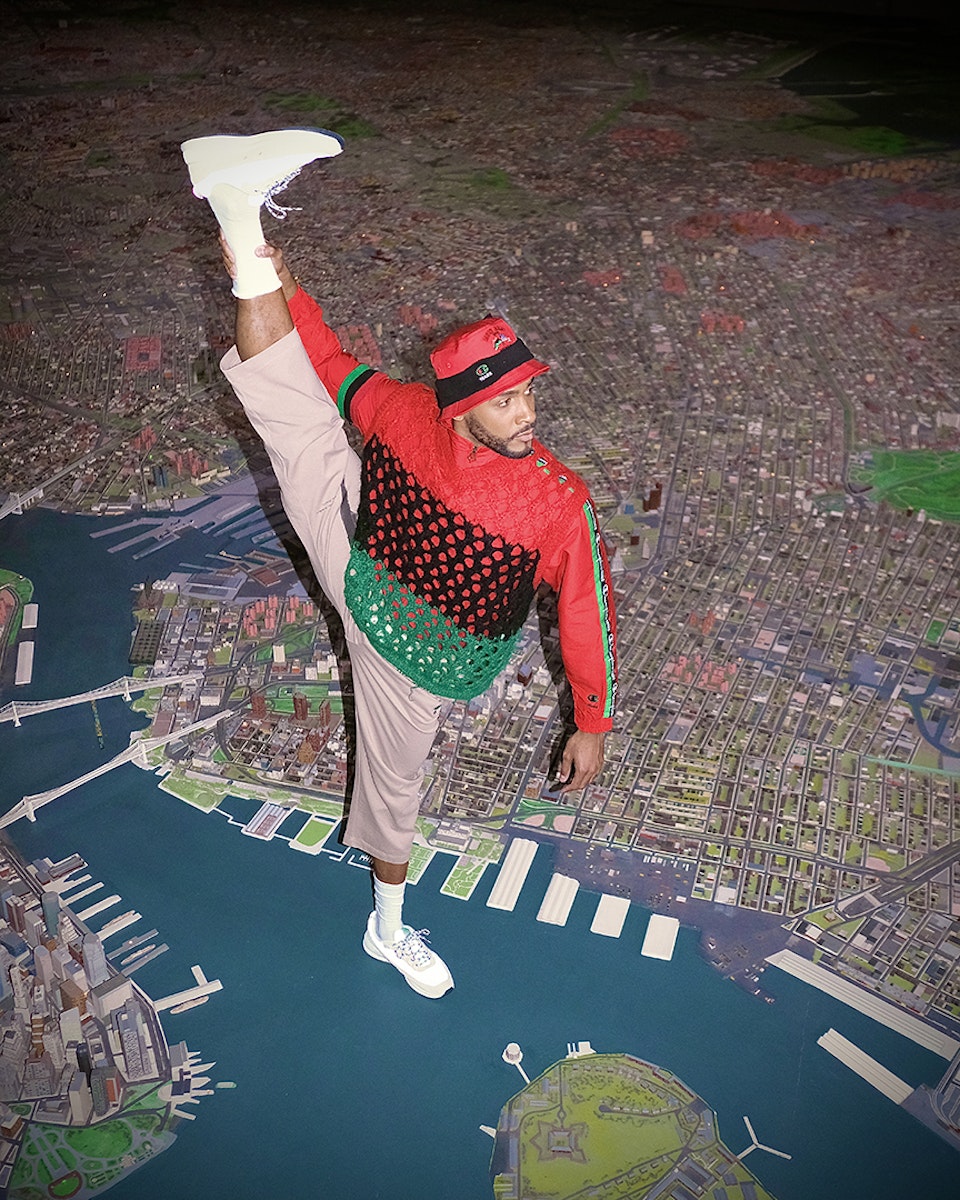 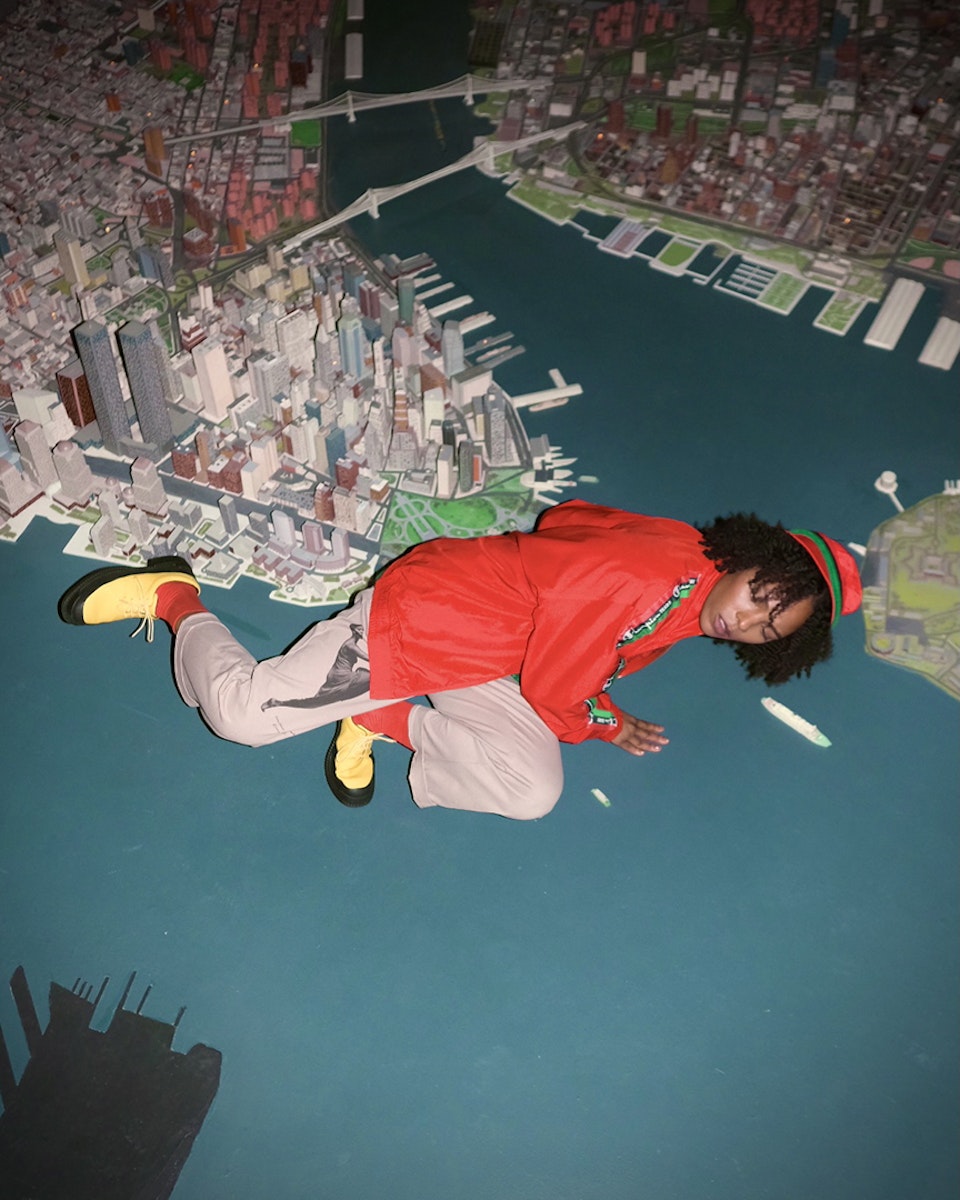 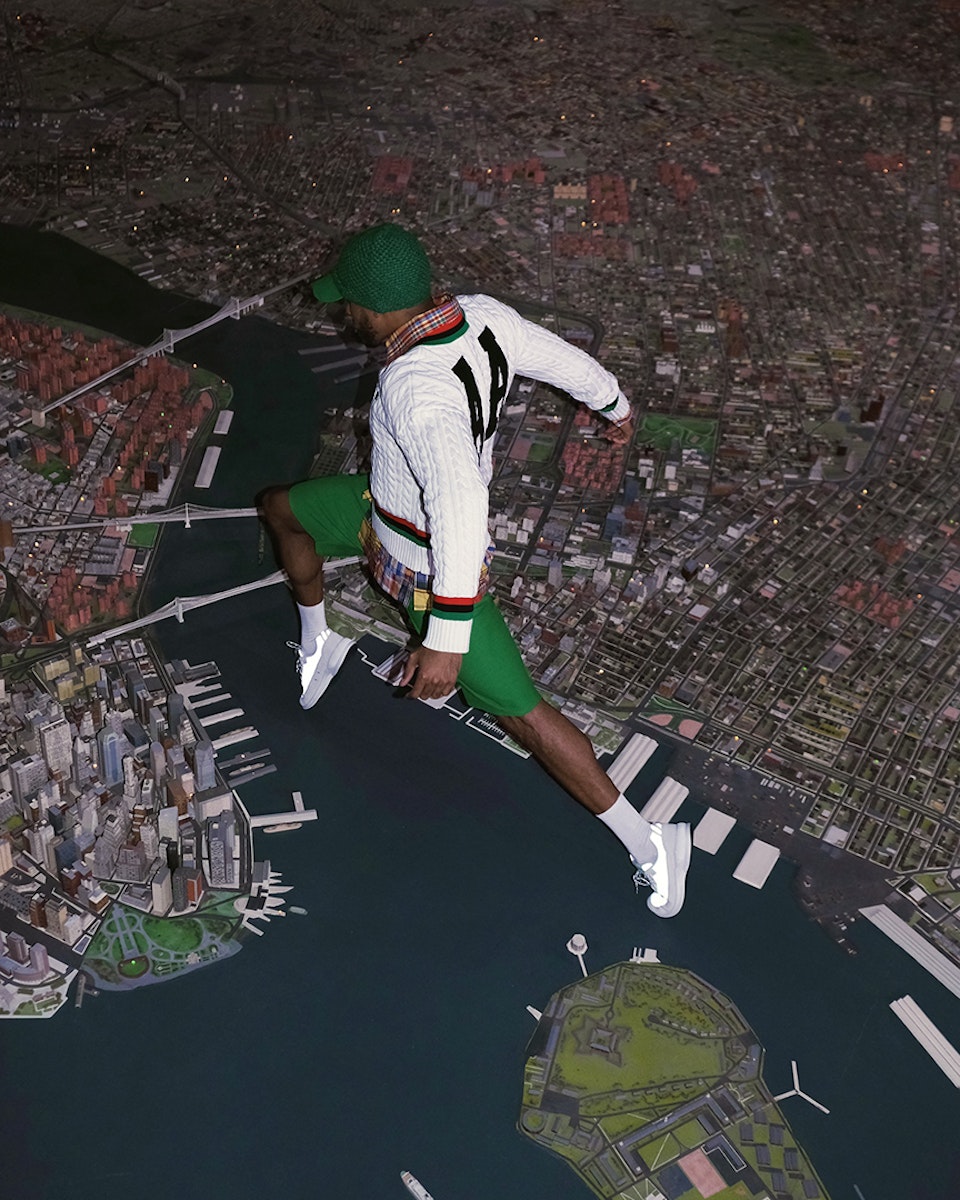 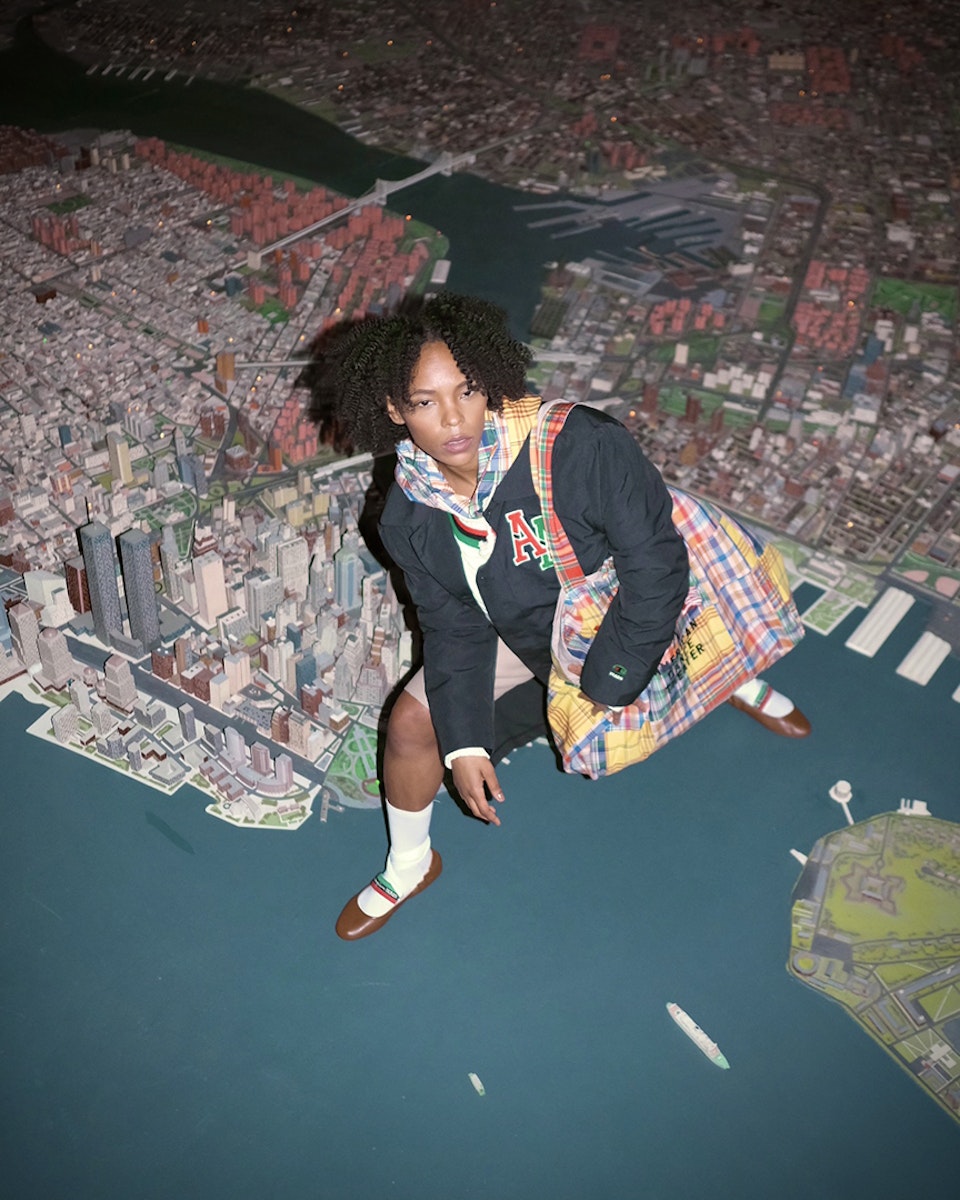 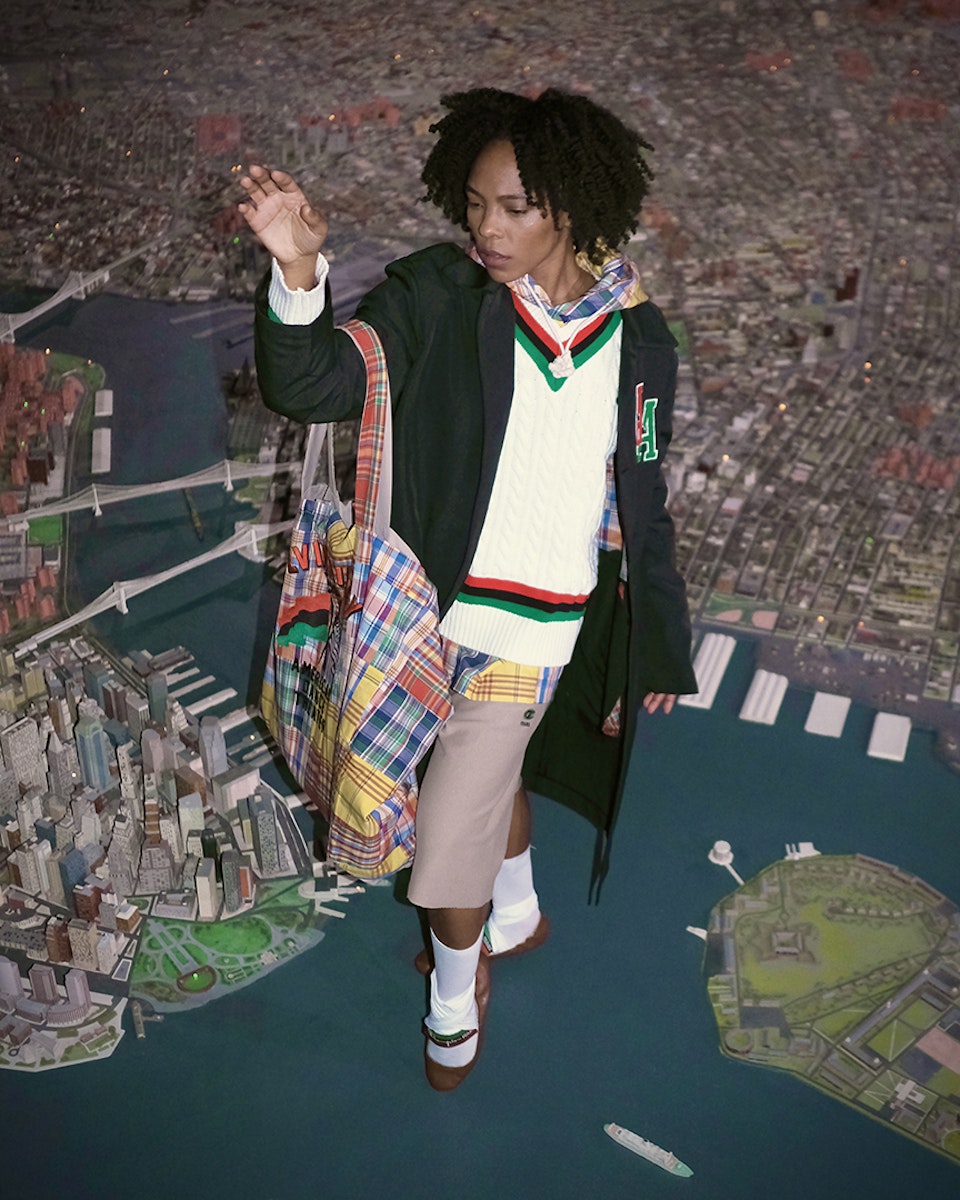 Due to launch in September, the Champion Tears collection takes influence from both the sportswear brand’s archives and one of the giants of 20th century dance: Alvin Ailey.

Founder of the Alvin Ailey American Dance Theater in New York – and one of the most important figures in honouring Black culture through dance – the whole thing is brought to life in a film by director, dancer and star of A24’s upcoming Zola, Taylour Paige.

“Tremaine is so thoughtful and intentional about every single thing he touches,” Paige says of a film that features Yannick Labrun and Samantha Figgins from the Alvin Ailey Dance Theater. ​“What he pours into, he breathes life into, and him asking me to direct this with the confidence I could do it, breathed new life into me in a way that felt like familiar true alignment.”

Watch the film and read more about the stellar collab below.

Tremaine, how did you arrive at the idea of celebrating Alvin Ailey in this new collection and what was your connection to his story?

I grew up in Queens, and there was this family called the Wilsons who lived nearby. My best friend was Kyle Wilson. His aunt and cousins both danced at Alvin Ailey’s Dance Theater. This was around 1992 so I was about 12 years old. We’d all be hanging out because that block was super tight-knit. And that was my first introduction to Alvin Ailey. When Champion reached out to me to do a collaboration around two years ago, I had a chance to go through the archives, especially the vintage pieces. It was then when I asked myself ​“what am I going to do with that?” that I decided that I wanted to tell the story of the Alvin Ailey American Dance Theater.

What drew you in to learn more about Ailey?

Growing up in New York, it was always that thing of: ​“Whoa, you dance at Alvin Ailey!” For me as a young Black man, it was a big deal to see Black people do something other than play sports or music. Usually, you only see Black people become athletes, musicians or join the military. So seeing Seth and Iris – Kyle’s cousins – dancing at Alvin Ailey Dance Theatre was big. They were the only artists I knew at that time.

How do you think the power of dance has kept the Black community across the diaspora hopeful?

I think there are certain innate things in the human condition and dance is one of them. We’ve been doing it since we were tribal beings, around the campfire. It was an outlet through servitude, especially in African-American, Caribbean and South American communities who were enslaved. That music connected you. It goes back to Negro hymns, which were paired with dance, and got indoctrinated into Christianity, which later grew into Gospel. It’s an outlet of joy and pain.

Ailey once said that one of America’s richest treasures was the cultural heritage of the African-American. He described it as ​“sometimes sorrowful, sometimes jubilant, but always hopeful”. Do you share those sentiments?

Yeah. American philosopher and activist Cornel West has said this a couple of times. One of the things he has said about this quote is that white people, when they see Black people, should stop and clap because after all we’ve been through, we still give the world so much joy through the arts and just who we are as people. Even the way we tell people our stories through the food we cook, our style, the clothes, the music we make, through dance, film, art, literature, poetry and technology. So Ailey’s right: through the sorrow, through the pain, we squeeze a lot of joy out too.

Through every collaboration you’ve worked on, including Champion Tears, you’ve focused on the stories of the oppressed. In the context of global conversations that have happened in the last year, do you think people are more open to learning about these stories?

Yeah. But I was really surprised to find out that no one ever reached out to Alvin Ailey to do a collaboration before he died. I assumed they hadn’t done a collaboration because it wasn’t right for them. To me it was a no-brainer to want to collaborate with the words and energy and the dancers of Alvin Ailey.

It’s a double-edged sword, though. We’re living in the midst of a global reckoning. Some people are having an awakening, and some are just pandering. As a minority, and as a human being, you have to pay attention to everyone’s intention. I drive down Sunset Boulevard and notice that all the billboards have Black people on them. Does that mean people have realised the perils of the African-American plight and the foot of systematic racism that we lay under? Or is this just a trend?

It’s like, cool, you got some Black folk getting creative director positions and all of that stuff, but it was never that way before. Time will tell on that one. I’m not in my ivory tower of judgement, but let’s see what happens in 20 or 40 years’ time.

What was it like diving into the Champion archives? Were there any pieces that jumped out at you? 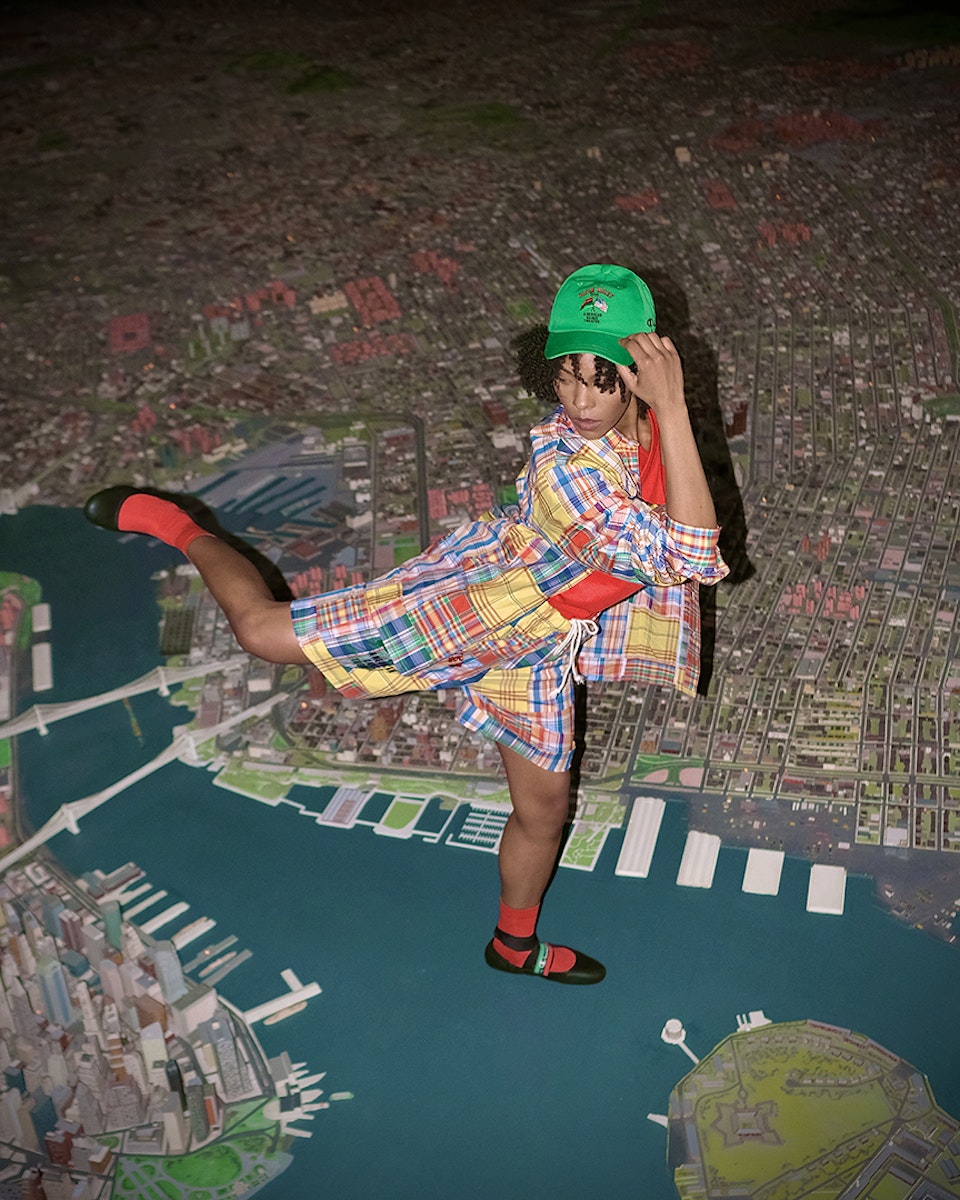 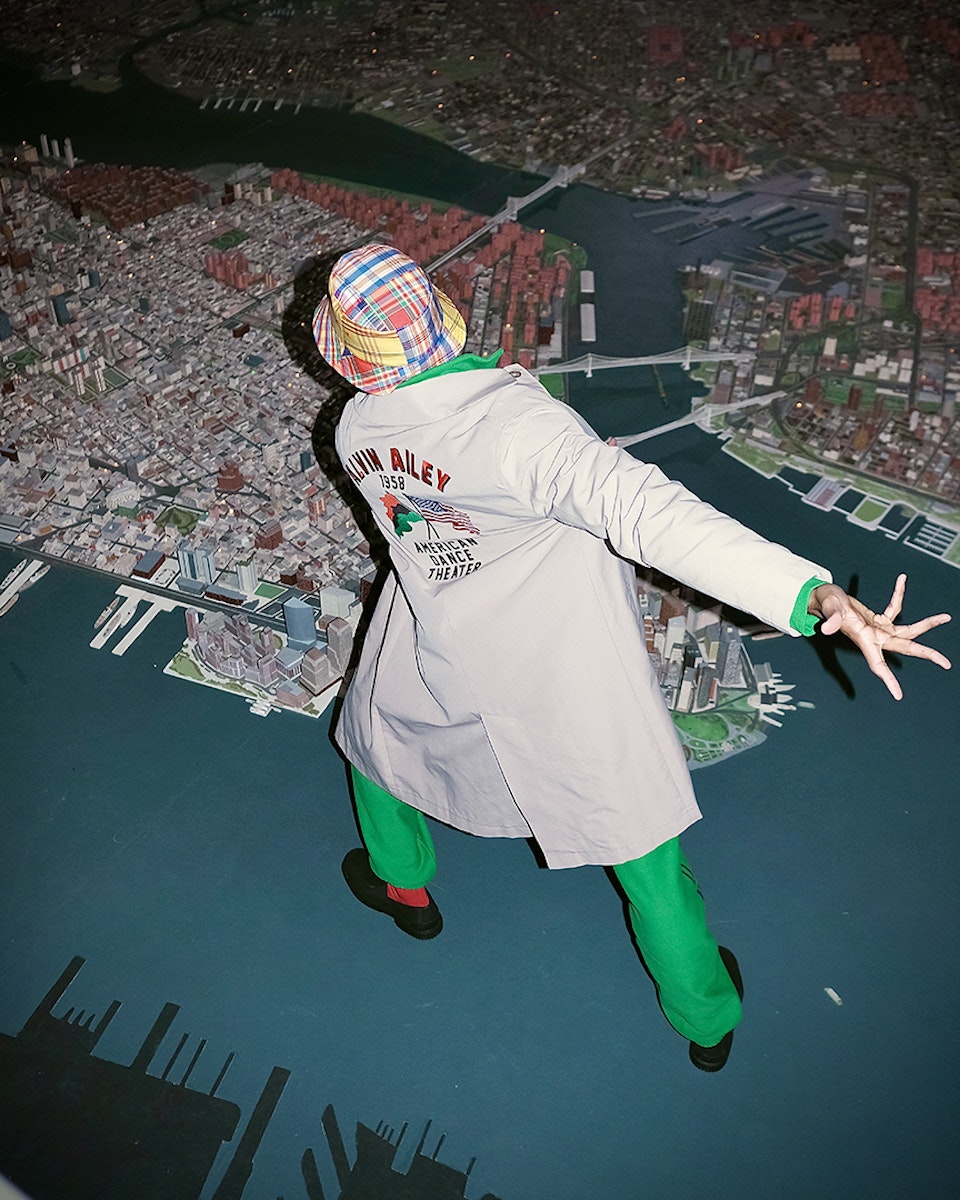 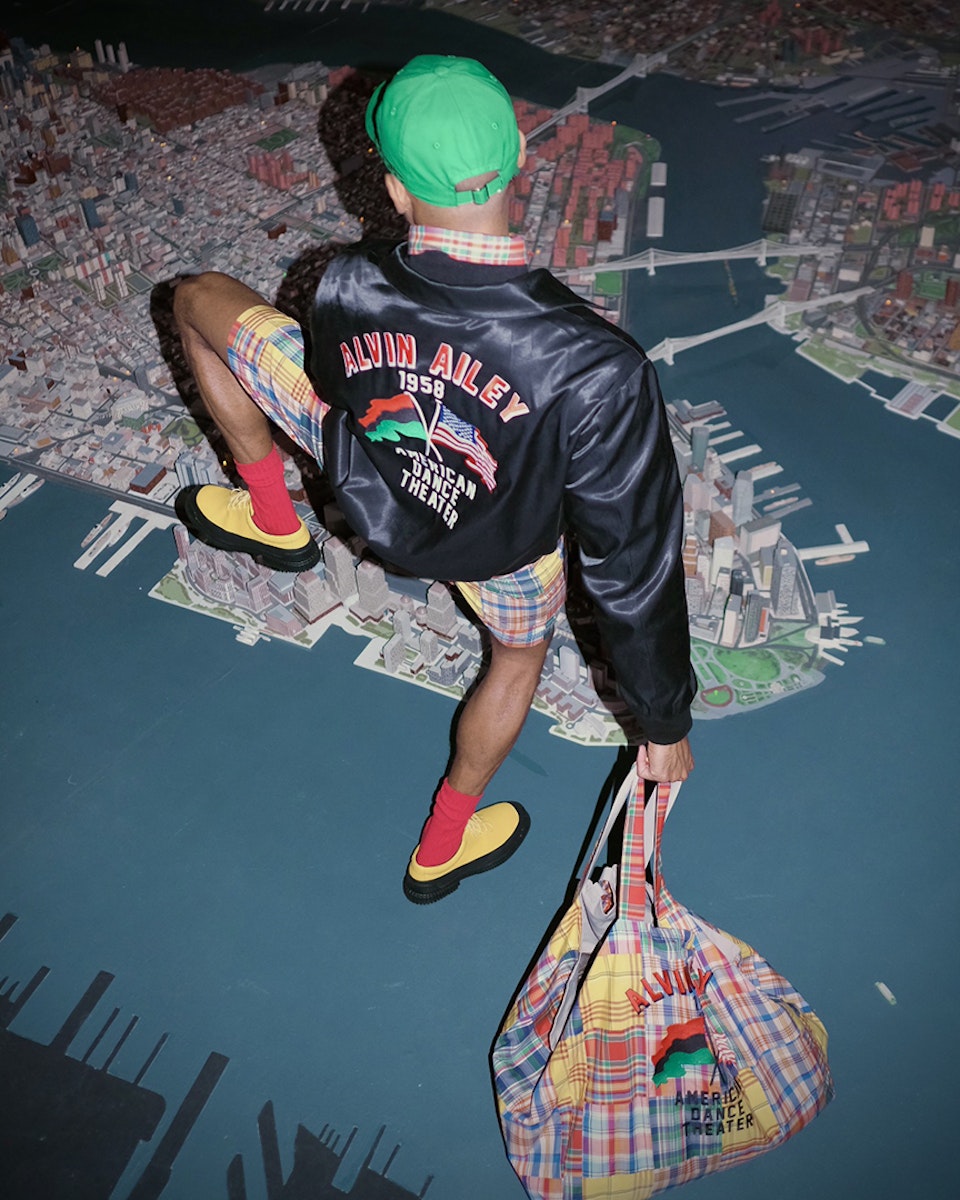 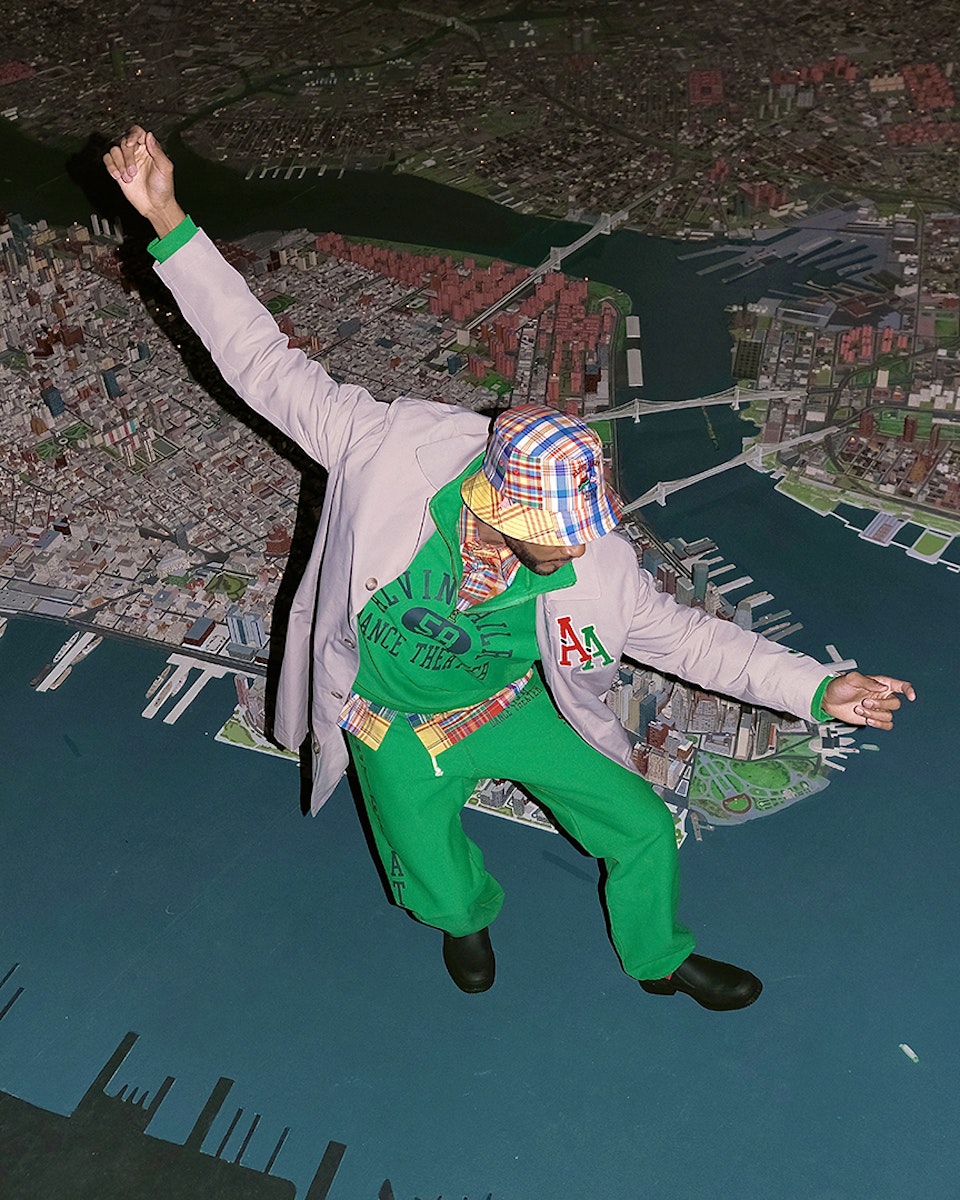 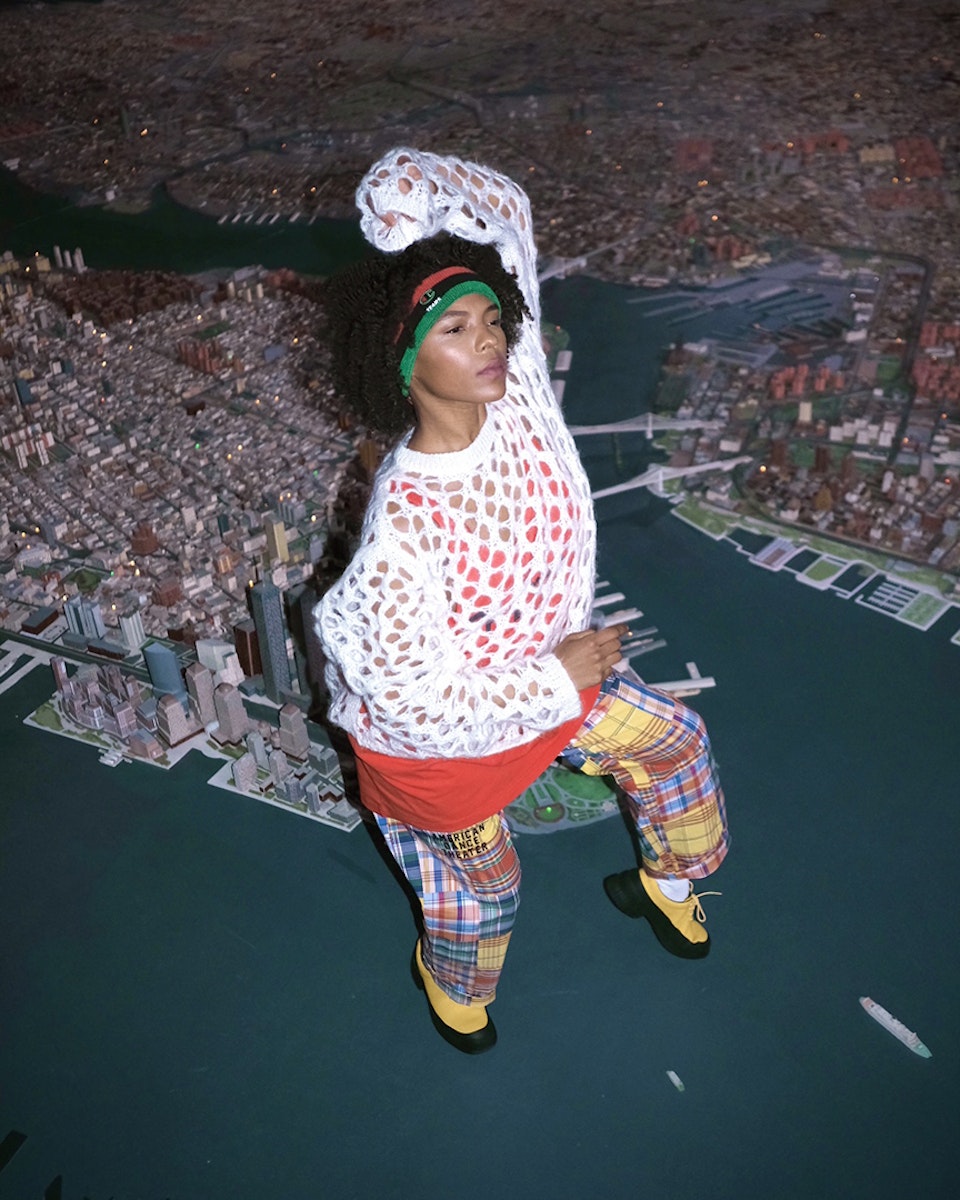 What were your favourite pieces to design?

The loose knit mohair sweaters, those are my favourite. I just love mohair, selfishly. I love loose-knit, punk-inspired, Vivienne Westwood-esque sweaters. I was also inspired by Jamaican culture, such as the string vests. So those were the references for me: dancehall, roots, string vests, mixed with punk rocker style. Something I can see the dancers in.

Also, the varsity jacket. I had to think about what the biggest part of a sports team was. I know how to design a varsity jacket but the challenge was fighting the masculinity that it comes with. I wanted people to realise that this dance varsity jacket is just as strong and meaningful as a football or hockey varsity jacket, because these dancers work and train just as hard, their bodies are just as strong. Their work they put in when they go and dance on stage is just as important.

The bucket hat and trench coats were inspired by Alvin Ailey’s piece called Hobo Sapiens. There’s a beautiful picture in the book by a photographer of a homeless-type guy wearing a bucket hat. I was inspired by that.

You’ve also used the red, black and green flag throughout the collection, a nod to Marcus Garvey and the Universal Negro Improvement Association. What message are you trying to share?

The Marcus Garvey colours are something I will keep using until I don’t want to use them anymore. It was a flag he made specifically to represent African Americans and Black people around the world. My business partner, Acyde, had a call with Marcus Garvey’s granddaughter and she told him a story that lots of people don’t know.

Part of the reason he made that flag was because white supremacists were taunting him about all the work he was doing, saying that he didn’t have a flag and didn’t have a home. So he made that flag in retaliation to that. Those are also my colours. The meaning behind those colours are important. Alvin is African-American, but he’s also American, for better or worse, all the bullshit and good things. That’s why I used both flags throughout the collection. We still have to figure out a way to coexist.

Growing up in Queens, did you ever see a part of yourself in Alvin Ailey’s story?

When I started learning more about him for this collection, I could see that he was somebody who wanted to get something out to the world, and be worried if people would be into it or not. I also see the connection about empowering the people around him, like his muse [dancer and choreographer] Judith Jamison. He has empowered so many people during his time on Earth and with the dance company and in life in general – that’s what I hope to do. I want to empower people. That’s when you leave a legacy.

You’ve also spent a great deal of your career using your platform and storytelling to engage with the younger generation. What do you hope they will take away from this particular story?

Charlie Casely-Hayford’s father, Joe, told Acyde something that inspired me. He said: ​“Don’t let hip-hop be the only expression for you as a Black man or Black person.” That’s my whole thing with this. There are so many layers to every culture. So in Black culture, it’s not just music and basketball and sports.

The Champion Tears collection will launch in September in select retailers across the globe.