Aminé is only 26-years-old, but he jokes that his new album was inspired by what feels like a ​“midlife crisis”. Limbo is a soundtrack for that mid-twenties period when your social circles are changing. Some friends are having kids, planning weddings and hoping to buy houses, while others are still getting into trouble, swiping infinitely on dating apps and clubbing until unholy hours. You’re still young enough to mess up, but old enough to know better, and life starts to feel a lot more real.

“I never came into this album like ​‘Hey guys! I’m in a midlife crisis, I’m going to make a midlife crisis album’ but I just really felt lost in my decisions,” Aminé tells me with a laugh over Zoom. And so we have Limbo, the LA-via-Portland rapper’s second studio album, in which he grapples with the subjects of morality, systemic racism and the prospect of bringing children into a messed up world, all while still retaining that playful quirk and those moments of carefree Black boy energy which have always made him stand out.

Our chat takes place two days before the release of Limbo (which was pushed back three times, allowing Aminé to tweak it to perfection) and just after he’s dropped the video for the Young Thug collaboration Compensating. Inspired by a birthday trip with 10 of his friends, the summer-toned, tennis-themed video is in a long line of distinctive videos which have boosted Aminé’s popularity and built his surreal aesthetic world.

Aminé first broke through in 2016 with the high-energy and very yellow video for Caroline (now sitting on 299 million views) for which he ate bananas and did Busta Rhymes-inspired fishbowl camera close ups in the back of a car. The self-directed visuals established Aminé’s happy-go-lucky, goofball charisma that pushes the Black, quirky skater culture popularised by Tyler, The Creator. ​“I was broke as shit, broke as a dog man, I had no money to my name,” Aminé says of making the Caroline video. ​“I had to literally use student loan money to pay the crew and directed myself because I knew what I wanted to accomplish, and I’m picky.”

“The music is not the only thing you need to be good at, it’s the whole [visuals], that’s what makes an artist and artist,” Aminé – a huge film buff – tells me. ​“Personally, I’ve always been a fan of the Pharells and Yes’ of the world.

“My favourite film is Submarine,” he smiles. ​“It’s a British film, that’s why I’m telling you!”

Beneath the colour palettes and the perky energy of his songs, there is often a darker theme. The video for his 2017 track Red Mercedes’, for example, sees Aminé and friends dressed up in white face in an alternative reverse racist universe, where white people are racially profiled at car dealerships. It’s hilarious to watch, but it also sneaks an uncomfortable issue into the viewers’ consciousness.

While writing and recording Limbo, Aminé’s sense of maturity and responsibility had been brewing, and it was solidified by the passing of Kobe Bryant, who died in a helicopter crash in January this year. Aminé remembers the NBA star as being ​“like a dad” on the track Woodlawn. On Kobe Interlude, Aminé’s friend Jak Knight, who narrates the album, says that ​“a lot of my innocence being a young person died with Kobe. I felt a piece of my childhood go with that n****.”

On Mama, Aminé finally honours the rap tradition of penning a heartfelt ode to his mother. ​“You only get one shot at doing that as an artist, so you gotta’ make sure it’s genius,” he tells me. ​“Twenty-plus years at the Post Office /​You was workin’ graveyard shifts for the both of us /​You deserve a long vacation, a standing ovation,” he raps over a gentle, piano-led beat.

Growing up with immigrant parents from Ethiopia, he never fully understood why they were so strict. ​“They wouldn’t let me do no type of sleepovers, nothing like that growing up. I would always cry in my bedroom and want to run away or some bullshit. You know that feeling we all have when we’re kids?” – he puts on a whining child’s voice – ​“fuck this shit!”. But moving out and entering that relationship changed and separation from his parents breeded an appreciation. And there’s that consuming feeling of dread that 20-something’s feel when they grapple with the looming mortality of their parents. ​“Hearing my parents talk about their lives almost brings me to tears because I don’t know how long they’re going to be around,” his voice breaks slightly. ​“Life is just crazy, especially with this year, I’ve started to appreciate life so much more.” 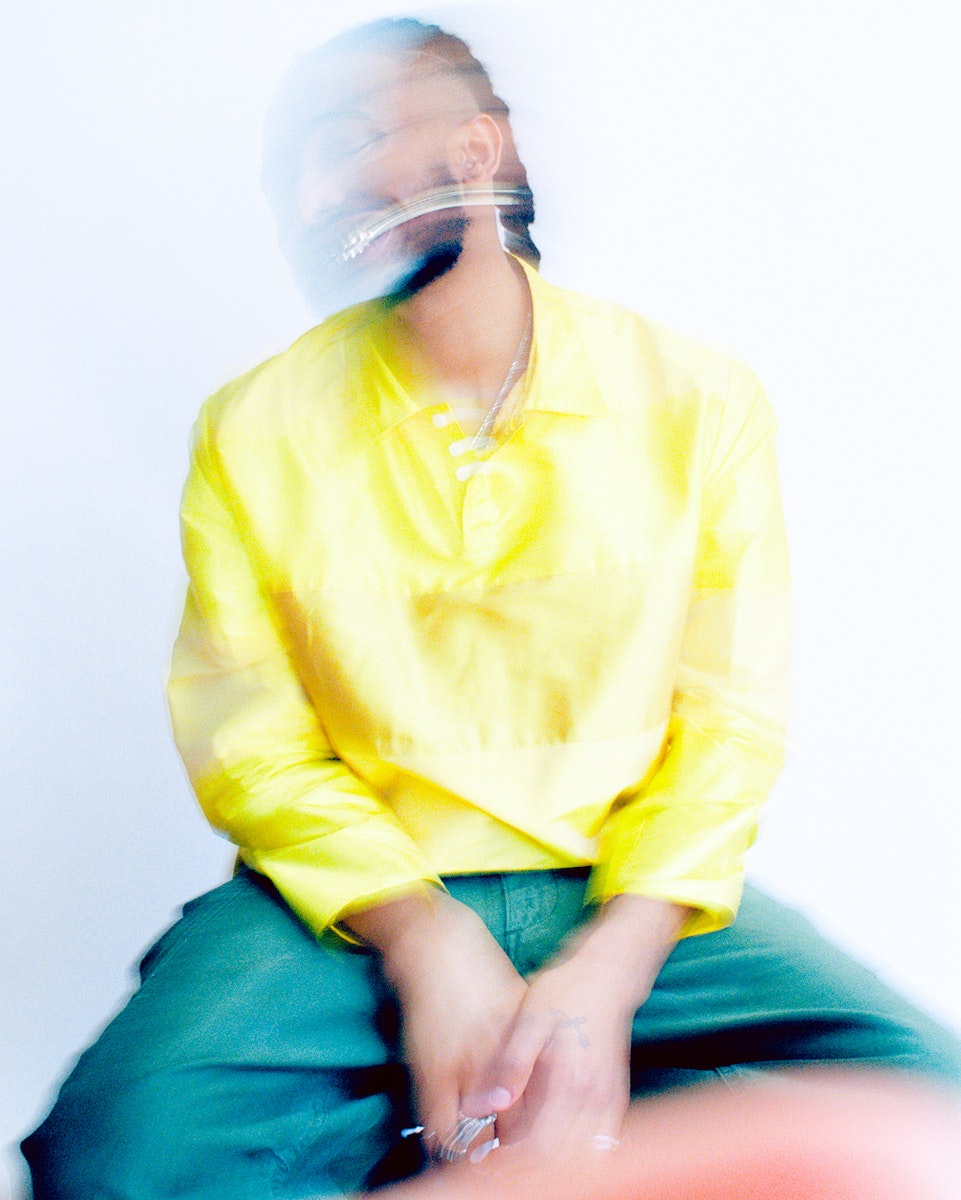 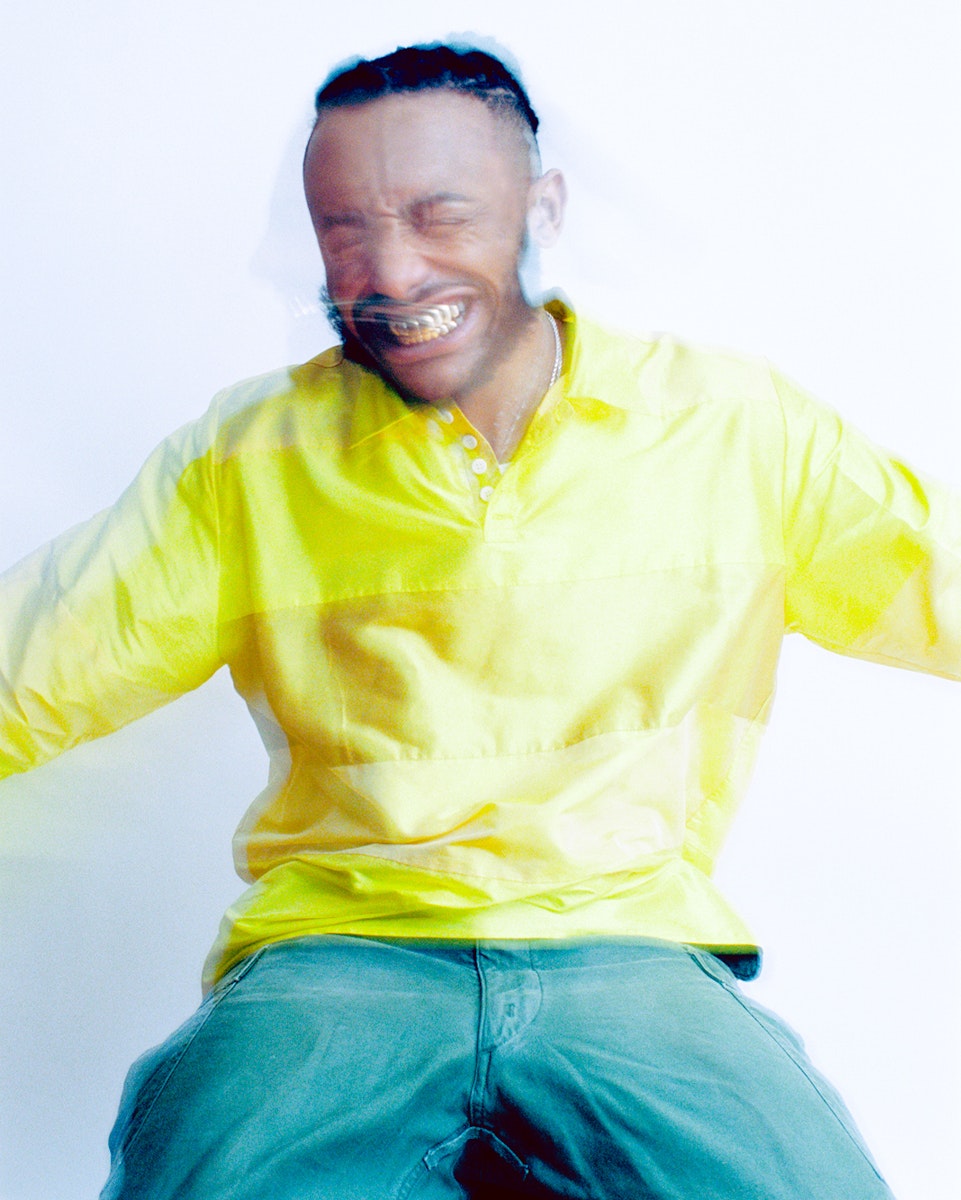 Easy, the slow R&B fight-for-this-love song was Aminé’s third-time-lucky attempt at a Summer Walker collaboration. ​“I always knew I wanted to do a duet with Summer,” he says. ​“I had sent her like two songs a while ago and she didn’t respond to them cause… I don’t think she liked them!” The inspiration for Easy came after Aminé had a heated phone argument with his girl during the Jamaica trip. The London-based producer P2J, who was on the trip, played the beat for Easy, and the slick guitar licks inspired sultry lyrics. ​“It was 4:00am and I literally freestyled most of it and that was based on pure feeling,” Aminé remembers. During these same sessions, P2J and Aminé also recorded some Afrobeats songs. ​“I did like 10!” Aminé reveals, “[they’ve] not been released yet because I want to do it right!”

Pressure In My Palms takes Aminé’s mind back to London, due to the guest vocals from Bree Runway, a Black British pop artist from east London and slowthai – who Aminé also teamed with for Disclosure’s poppy dance-rap track My High – being recorded in the British capital. ​“I love London, man,” Aminé says fondly. ​“Like, not just for the city or for the monuments but I love the people. The Black culture there is just cool. I feel like I’m home when I’m there as well.”

Aminé was born Adam Aminé Daniel in Portland, Oregon – a place that, he reminds me, is very white (84.42 per cent white, to be exact). He sometimes felt out of place while studying an outdated marketing college course in the city, and he’d sneak into a music writing room after hours, with dreams of becoming a famous rapper and director. ​“Nobody expected me to be a successful rapper at least,” he says flippantly. I press him on this, to which he stresses slowly in a humorous tone: ​“I’m a n**** from Portland.”

“When your skin darker, shit gets harder,” Aminé raps on the first verse of Limbo​’s opening track Burden, before going on to speak about disproportionate sentences and unfair incarceration for cannabis dealing: ​“Shit is legal, now the dealers know the jig is up /​When it’s us, n****s gettin’ years, maybe ten and up /​Soccer moms do the same, but government don’t give a fuck.”

“I’ve seen hipsters owning dispensaries and weed being a cool thing,” he says of the verse, ​“but 10 years ago they called us hoodlums for the same thing, they’re just hipster drug dealers now.”

The world has been watching Portland over the last few weeks as federal troops, sent by Trump to quell two months of protests, were filmed kidnapping and attacking protestors. ​“This is absolutely the most horrific, terrifying thing I’ve ever seen,” Aminé days. ​“I thought that after the protests the police would be a little scared, you know, but it went to X Games mode. This shit went crazier.”

But despite the dire state of the world, Aminé has hope. I ask him what he’d do if he woke up tomorrow as the President of the United States of America. ​“That’s actually so easy,” he fires back. His answer: abolish the police.

“I definitely don’t think the structure of the police was ever supposed to help the people you know?”

He’s arguably right. The police in America were partially formed out of slave patrols, and in this most recent wave of protests, instead of asking for police reform, people are campaigning for police abolition. Police and prison abolition is an end goal which re-imagines what it means to protect people and provide effective restorative justice. It recognises that the policing system that exists was not built to serve everyone, and insists that to cater to all, we must abolish and start again. ​“I don’t know why the way we’re talking about this has to be a dream though,” Aminé says on the subject. ​“I’m not going to sit here and act like I have the answers, but I would love to see people being treated equally.”

We’ve been talking for around an hour, and Aminé realises he’s running late for his other promo duties. There are playbacks, merch drops and social media rollouts to organise, as well as rehearsals for a live-streamed YouTube performance – a strange new necessity for big artists pushing albums in the Covid-19 era – which is making him nervous. And so our conversation comes to a close. Limbo might document Aminé’s confusing quarter-life crisis, but I’m getting the impression that he’s ready to carry a lot more weight on his shoulders.