“I’m so frustrated with the lack of choice for men. I want to show them there’s more to life than cotton shirts.”

So said Kim Jones to THE FACE in 2001, fresh off Central Saint Martins’ MA Fashion course. He was 27 at the time, a Chicago house obsessive (still is), a vintage Vivienne Westwood collector (probably still is) and an early supporter of the then-elusive streetwear brand BAPE. Now, Jones is the Artistic Director for Fendi and Dior, but back when he was a student, the menswear available to him was placed in two distinct categories: poncy suits or sports casuals.

Over the past decade, the London Look has been moulded by the subversive subcultural leanings of Martine Rose, the storied Black British histories of Wales Bonner, Cottweiler and Nasir Mazhar’s steely East London dancefloors, and Jonathan Anderson’s riotous take on traditional menswear tailoring. But a new collective force of menswear designers is on the rise, with brands like Ahluwalia, Saul Nash and Bianca Saunders breathing fresh life into British design. Cross-referencing politics, sexuality, race, mental health, gender and class, they’re reshaping what it means to be a British man in 2021.

“Since Ahluwalia, Bianca Saunders and Stefan Cooke, I feel like menswear design has become really exciting in London again,” says Harry Fisher, buyer and founder of East London store, Htown. ​“After Nasir [Mazhar] and all those designers, it was so exciting, but there was a quiet period of time in between.” Fisher pins the re-emergence of British menswear talent to designers becoming more socially aware, focusing on ​“not only their designs, but also global issues that are really important”.

Priya Ahluwalia, the 28-year-old designer behind namesake brand Ahluwalia, was drawn to menswear because she felt there were a lot of stale boundaries and traditions waiting to be broken.

“I felt there was potential to push the codes,” she tells me. Since her London Fashion Week debut in 2018, she’s elevated mundane, everyday pieces like zip-up jackets and tracksuit bottoms with surreal pops of colour and embroidery influenced by her Nigerian-Indian heritage. Sportswear garments such as windbreakers are subverted and become smart evening pieces, all while referencing migration, the Black power movement and Southall’s Punjabi community.

“My work is rooted in politics because I’m always exploring themes that could be considered political,” Ahluwalia continues. ​“But I don’t think that by wearing a piece someone would be taking a political stance. To do that, we have to be much more radical, and tackle institutions and systems directly.”

It goes back to Fisher’s point that young designers are feeding off current affairs for inspiration. As a buyer, he’s interested in designers that are doing their bit for the world. ​“In this day and age, we want to think about the 360 of the garment,” he says. ​“Where it’s come from and where it’s going. People don’t want to buy something without a story.” 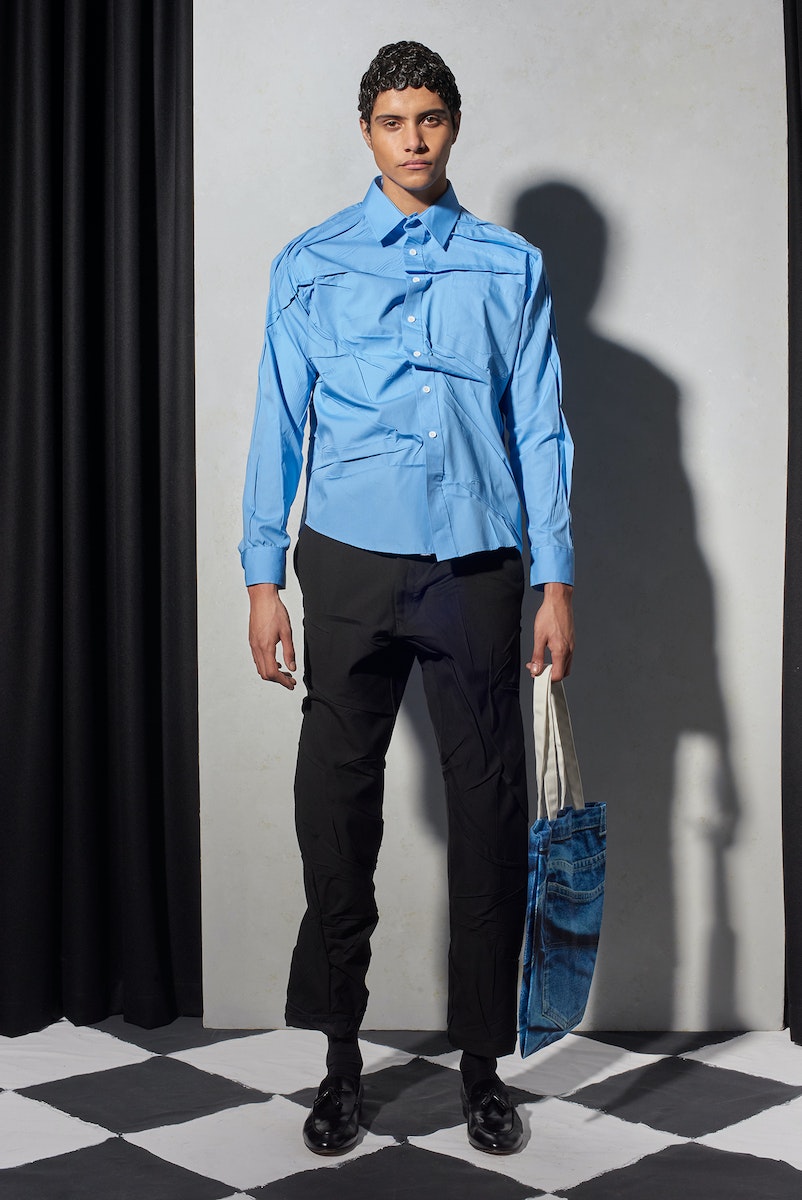 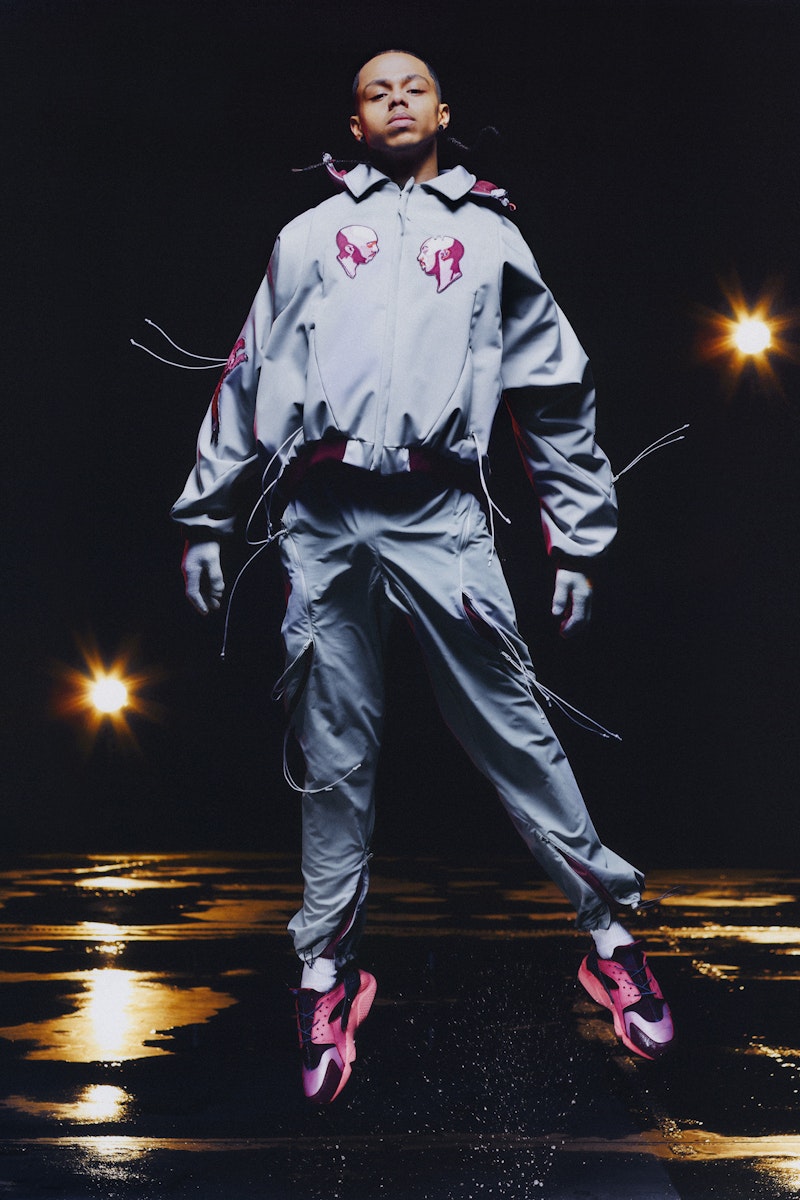 For some designers, those elements are more discreet. Bianca Saunders sets out to redefine masculinity, drawing from her British and West Indian background through delicate ruche flourishes and surreal cuts. By addressing the tension between traditional designs and the ​“evolution of class streetwear and avant-garde couture”, the 28-year-old hopes to reimagine menswear in a sensual, quietly romantic style.

“I aim for my work to be the new norm for menswear, creating a larger range of diversity within fashion, with different people from many walks of life, different ages, races… I want my clothing to give the wearer a sense that anything is possible, by feeling comfortable in their own skin.”

Comfort and versatility are key for the modern man, who can often move from a dancefloor (come 21st June… we hope) to a park kickabout in the space of 24 hours. Saul Nash’s technical designs are informed both by his professional dance background and his years studying at the Royal College of Art, creating space around the body for ease of movement. But the mesh vents in his garments are not solely for practical purposes. As he puts it, they’re a ​“spectrum for men to find themselves within. My brand explores self-liberation and aims to challenge preconceived ideas of the men I grew up around in London.”

Most recently, Nash’s AW21 collection was an ode to his sexuality. His signature breathable garments were accompanied by a dramatic short film that showed two male dancers kissing, while a group of heteronormative men ogled from a distance. ​“In this day and age, it is key to question the things which are happening around us.”

Other CSM MA Fashion designers are tackling socio-politics head-on, with British-Moroccan graduate Adam Elyassé examining the African diaspora and being multi-racial in the UK. His dual heritage and explorations of identity found form in the collection he presented last month: haunting, cloak-like garments concealing the face and body, and utility touch-points through padded jackets and bondage-style trousers cinched at the knee by a belt.

“I’ve seen so much dormant and active angst in men in my environments,” says the 25-year-old East Londoner, ​“They’ve been isolated from the conversation.” The awareness of toxic masculinity feeds into the designer’s complex approach to design – one that’s formidable yet playful, eerie yet wholly vulnerable. ​“I try to design authentically for this conflicted man, the world his values live in and the world he wants to be in, by combining the aspirations of joy and the realities of suffering.”

“My work explores why men struggle to talk about climate change, since it requires care,” he explains. Through references to the great outdoors, soft finishings, practical windbreakers and micro shorts, Howe takes inspiration from the very men he grew up around. This meant that his collection ​“became deeply British. [It’s about] that British stiff upper lip that tells us ​‘everything’s fine’ when actually, we’re in turmoil.”

Howe wants the men who wear his clothes to feel cared for, healthy and motivated – and also cognisant of any suppressed feelings. Nonetheless, ​“just because I want that, I wouldn’t want to enforce it,” he clarifies. ​“What people feel inside has always been a huge part of the design, though. Whenever I’m doing a fitting, it’s almost more important for me to talk to the model rather than see them, asking if they feel comfy physically, but also uncomfortable emotionally. If I can Trojan horse this feeling of masculine empathy in there, it’s a win-win, right?”

Andrej Gronau, another CSM MA Menswear graduate, has a similar ethos to Ahluwalia, believing that the masculine rules of menswear are there to be broken. 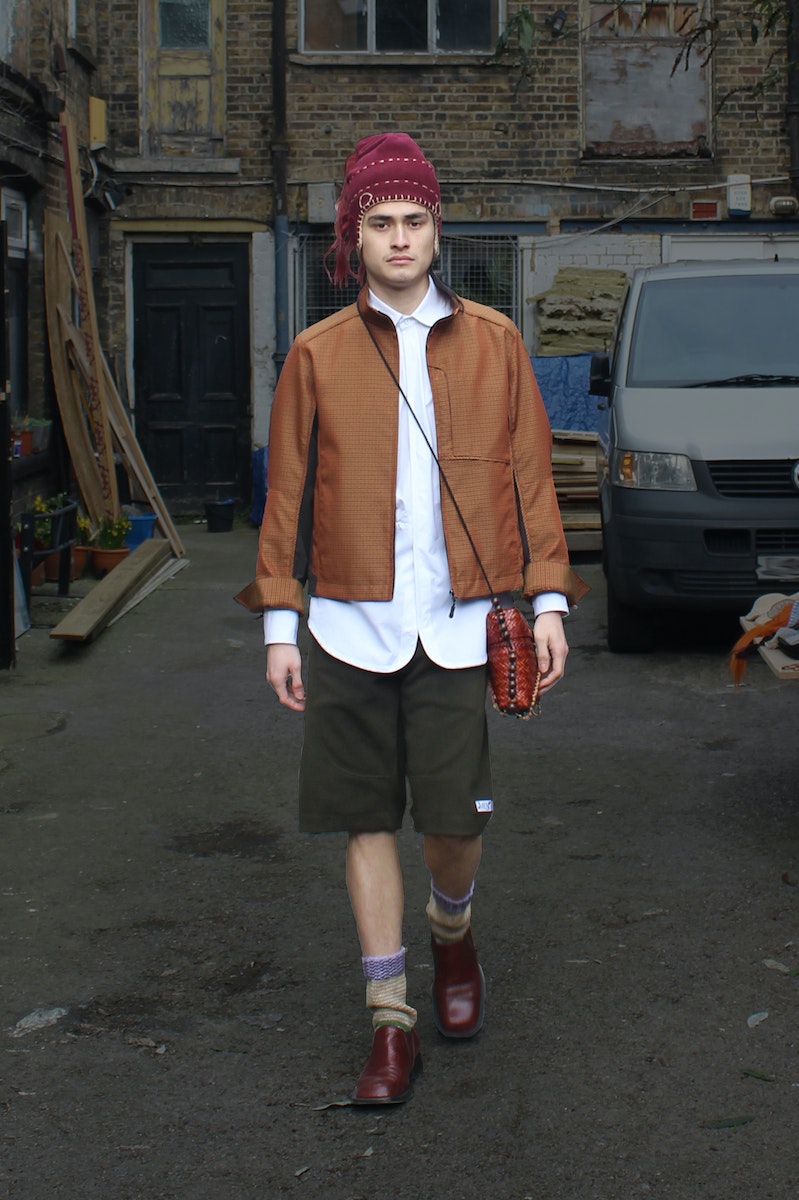 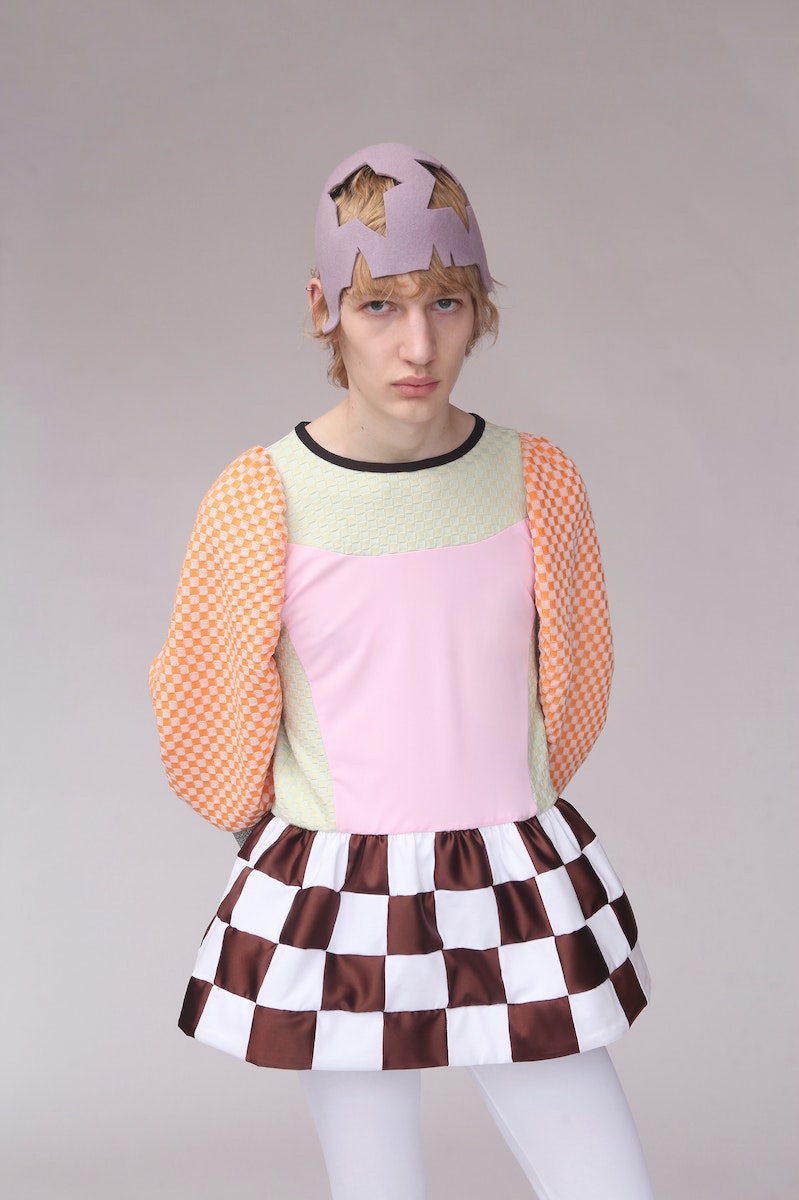 “I tried to design menswear that isn’t scared of colour, humour or tenderness, ​’cause there’s nothing to be scared of,” he states. In his final collection, the 27-year-old featured a dreamscape of surreal patterns, feminine shapes, vibrancy and rah-rah skirts, worn by angelic, blonde-haired boys. His work explores ​“the concept of identity and alter-ego,” and, through purple tights, maximalist sleeves and star-shaped motifs, Gronau’s ethos encourages men to reveal who they are or who they want to be.

“I don’t want to sound too cliché when I say I want people to feel confident in my designs, but I think that’s what fashion in general should do for us. I want my designs to be a positive add-on.”

Horace Page, also in the CSM MA Class of 2021, predicts menswear and womenswear will continue to intersect over the next few years. ​“I would hope that there will be a shift away from masculinity being defined by [a garment’s] sharpness and [people will] look more towards a way of dressing that shows self-awareness.”

Page’s graduate collection examined the contrast between past and present, specifically the cultural gap between Britain’s traditional countryside and the city. Recontextualising materials like nylon, tweed and recycled cashmere, while introducing raw edges, patchworks and military procession dress, the collection sartorially cross-referenced the two environments. 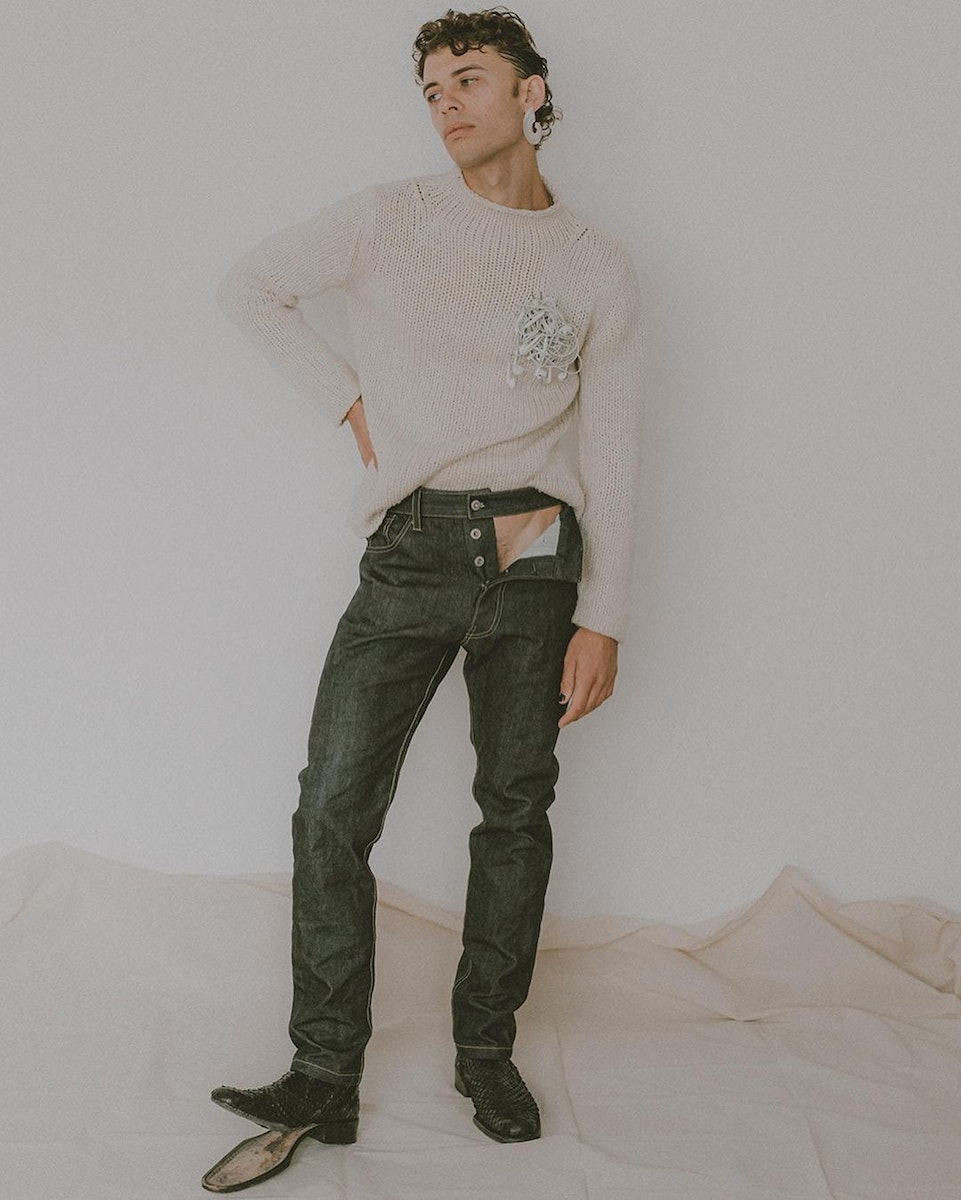 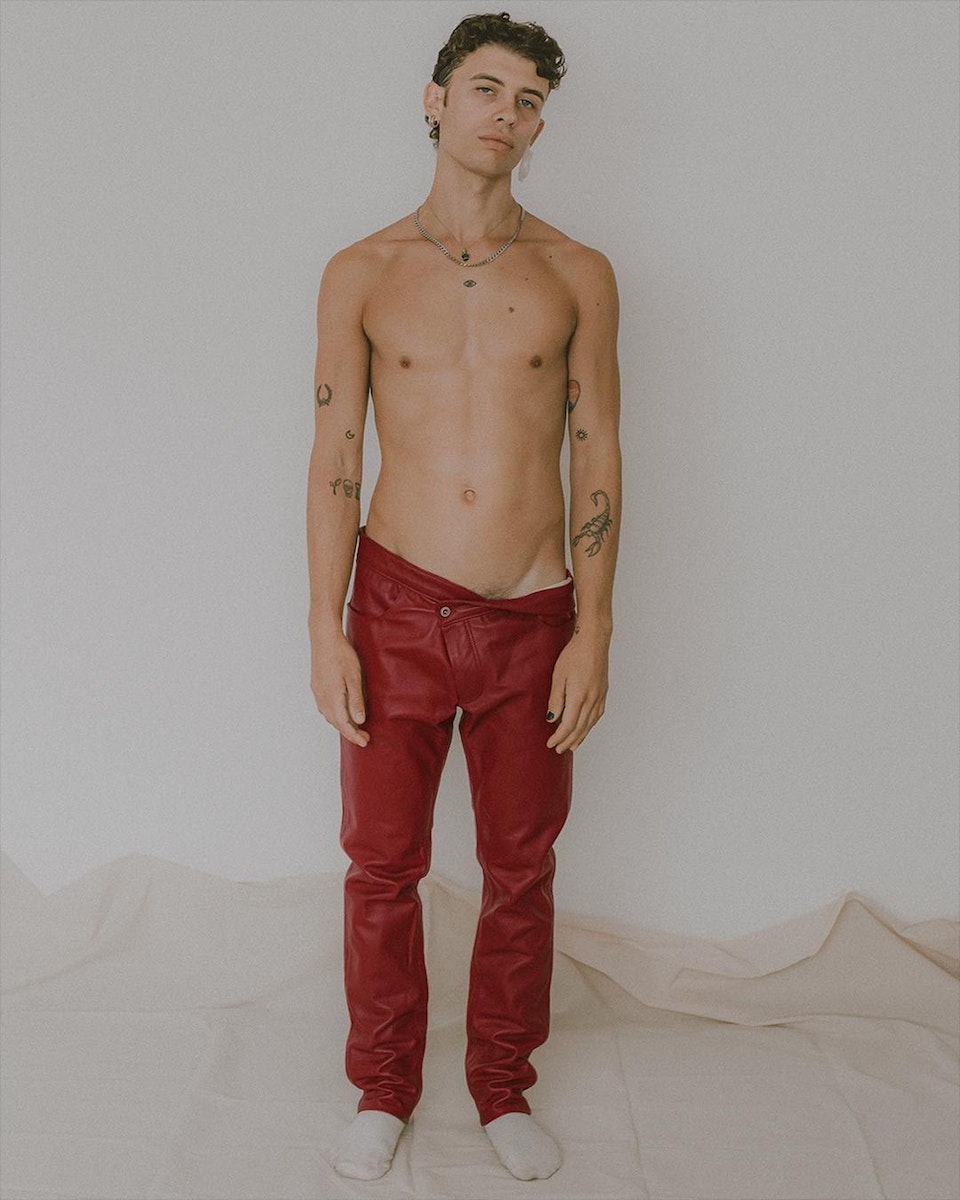 “I was looking at the concept of free will in [Thackeray novel and Kubrick film] Barry Lyndon and Trainspotting, and the idea of each film’s protagonists fighting their own destiny.” Accordingly, his garments fit in just as much in a woodland environment as they would in the streets of the big city, for the chameleonic man blending into all settings.

Aaron Esh, who featured in THE FACE Spring 2020 issue, is tackling the mental health crisis amongst young men in a sensitive, empathic light through his work. As the male suicide rate is three times that of women in the UK, his emphasis on the importance of talking, crying and facing life head-on could not be more urgent. Just last week he was awarded the Alexander McQueen scholarship at Central Saint Martins, where he’s been studying since September 2020.

Another inherently political designer, Esh also examines Britain’s years under Tory leadership in his designs, because, as with many young people, it’s had a direct, negative impact on him.

“If you are putting work out into the world at a time like this, it’s impossible for it not to be political,” he says firmly. ​“Our generation doesn’t have fair access to the same things our parents did. Housing is a basic human right, so why is it being bought up and rented back to us at twice the cost of maintenance?”

Made with the skint geezer in mind, Esh’s philosophy looks inwards. It’s about being young, having no money, shitty Tinder dates, living hand to mouth ​“and having four flatmates you don’t really like”. Think: Mike Skinner as a fashion collection.

“My work references my own struggles and turns them into something beautiful,” he adds. So Esh’s menswear is ultra-sexy, with ​’90s-style leather trousers, structural cream jackets, overdyed jeans and long-sleeved mesh tops, all worn with matted hair wax and the stench of the night before. ​“Some people make clothes to get you laid,” says Esh with a grin. ​“I think mine are more inspired by the next day when you regret it.

“When the clubs finally open, it’s all going to be about looking fit, being carefree and effortless,” he continues. ​“I think this will be important for menswear in the next few years.”

In the hands of these designers, the politics of fashion has never felt so daring and inspiring – but also wearable. Welcome to the new age of British menswear.